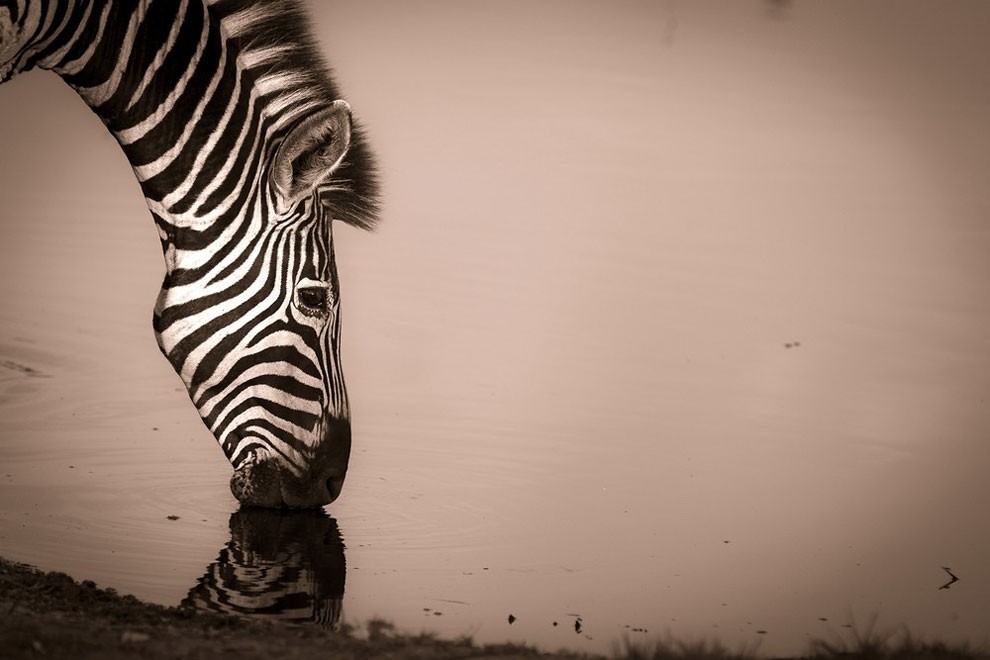 Chris feels, “the stripes of a zebra are an artwork of contrast. To photograph them in monochrome or in Sepia for is the best way to show their beauty. This stallion came down to drink in some beautiful early morning light, and was not bothered by us as we snapped away”. (Photo by Chris Renshaw) 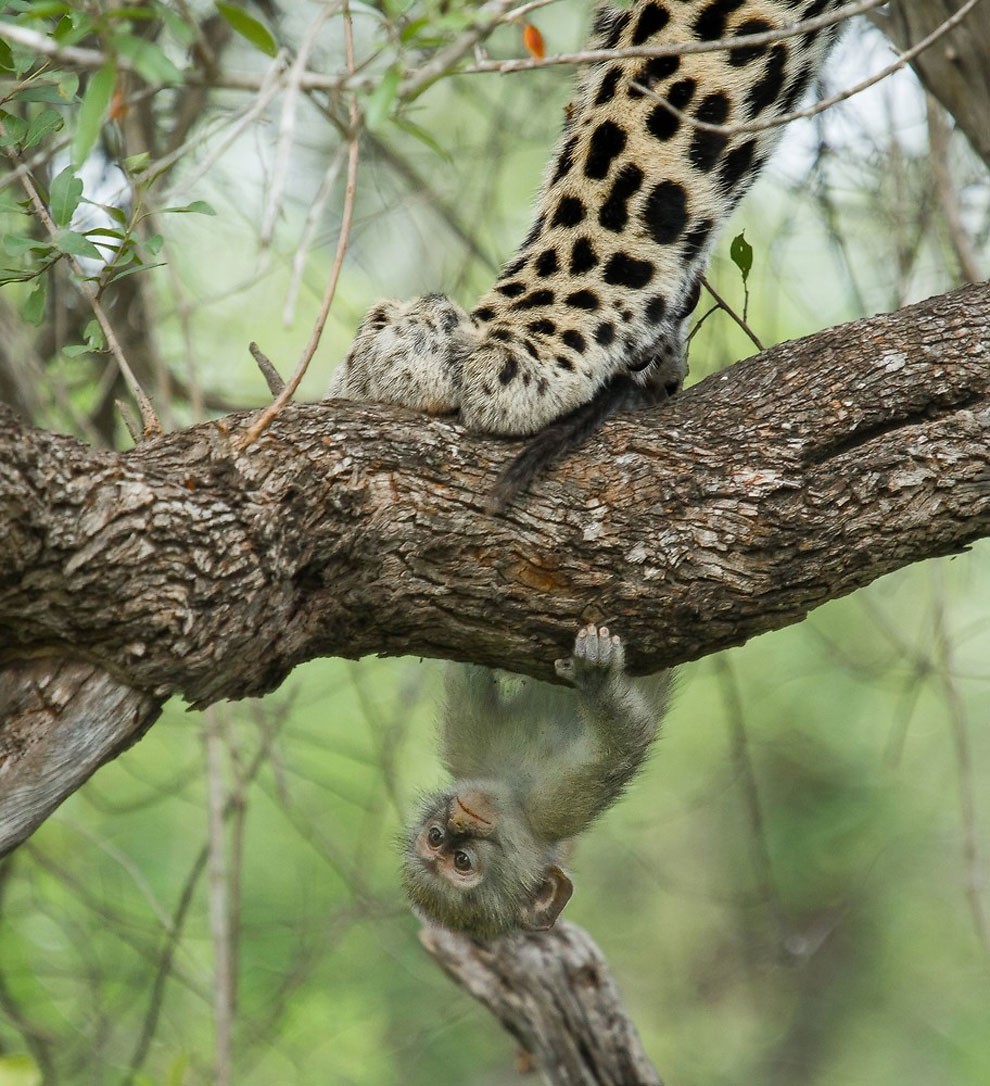 Chris Renshaw has recently been awarded the 2015 Africa Geographic “Photographer of the Year” award. Chris tells that his love “for anything wild and adventurous came from a deep rooted attachment to the African continent. This image shows that timing, a bit of anticipation, and luck allowed this incredible moment in time to be captured”. (Photo by Chris Renshaw) 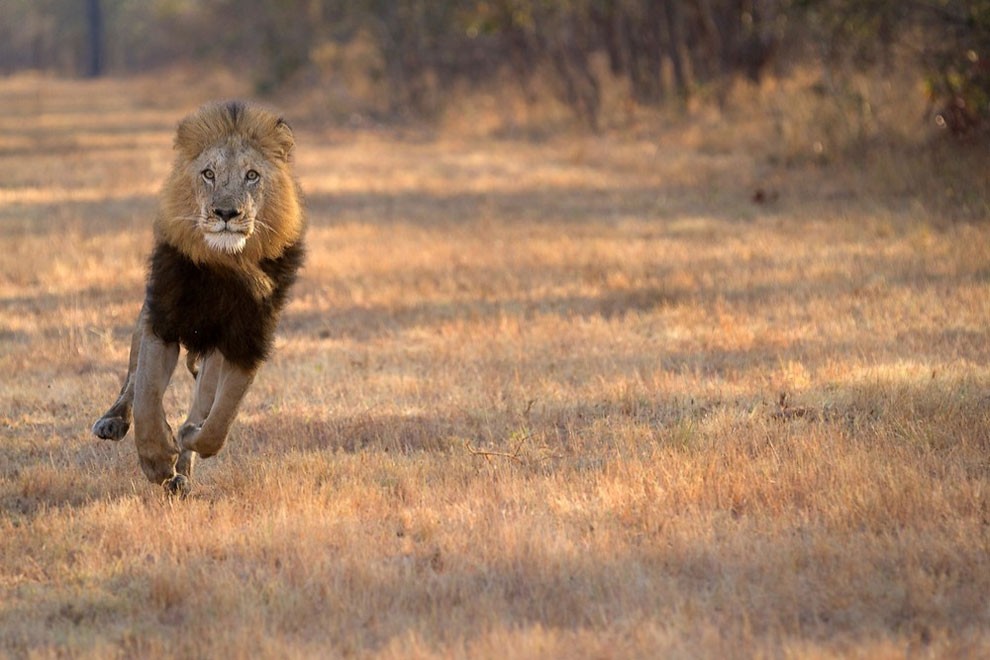 “A male lion at full charge is something that every wildlife photographer wants to capture. This dominant male lion was chasing a female off a carcass that her and her pride had killed. They came straight past us in the safari vehicle, oblivious to our presence. Hearts were in our mouths but fingers were still on the shutter. It was an amazing display of speed, power and strength,” says Chris Renshaw. (Photo by Chris Renshaw) 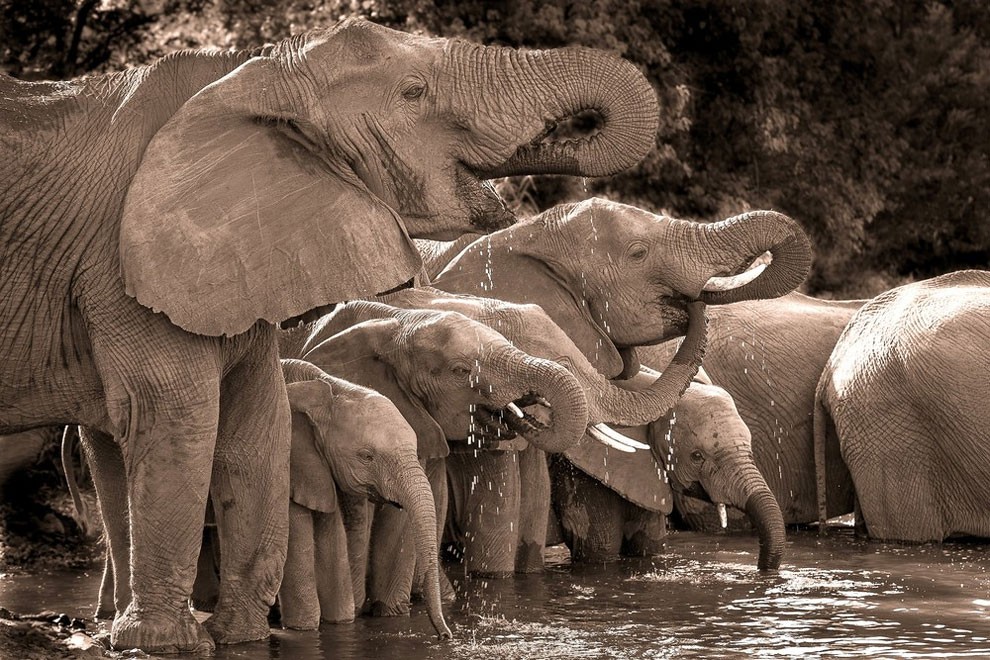 At Singita lebombo in the Kruger National Park, a herd of elephants, led by the matriarch, slake their thirst at a watering hole. The photographer comments, “What I love about this image is that it shows the multi-generational and family driven makeup of an elephant herd. The extremely close bond keeps these families and future generations together for hundreds of years, something that we as humans can appreciate”. (Photo by Chris Renshaw) 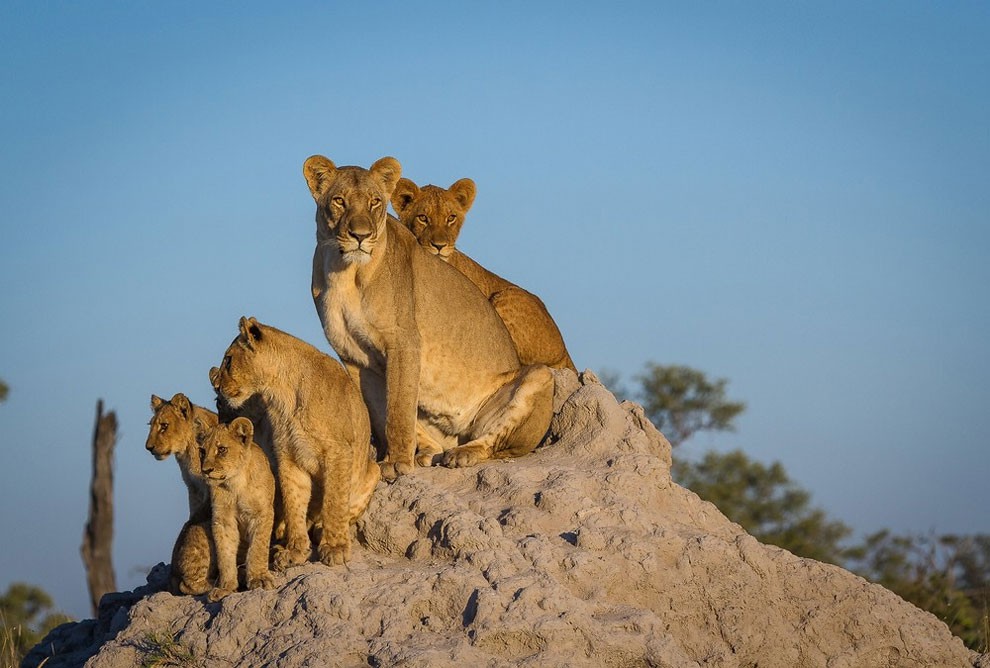 This pride of lions resides in the North East of Botswana, in the private Selinda concession. The photographer believes, “these lionesses are without a doubt some of the biggest and healthiest in Africa. The beautiful morning light and elevated position makes us look up to the queens and future kings of the Africa”. (Photo by Chris Renshaw) In Uganda, a herd of Angolan-Watusi or Longhorn cattle make their way to a river for a drink. This unique cattle breed has extremely long and intimidating horns, dwarfing the tiny herdsman and shepherds that keep them in check. (Photo by Chris Renshaw) 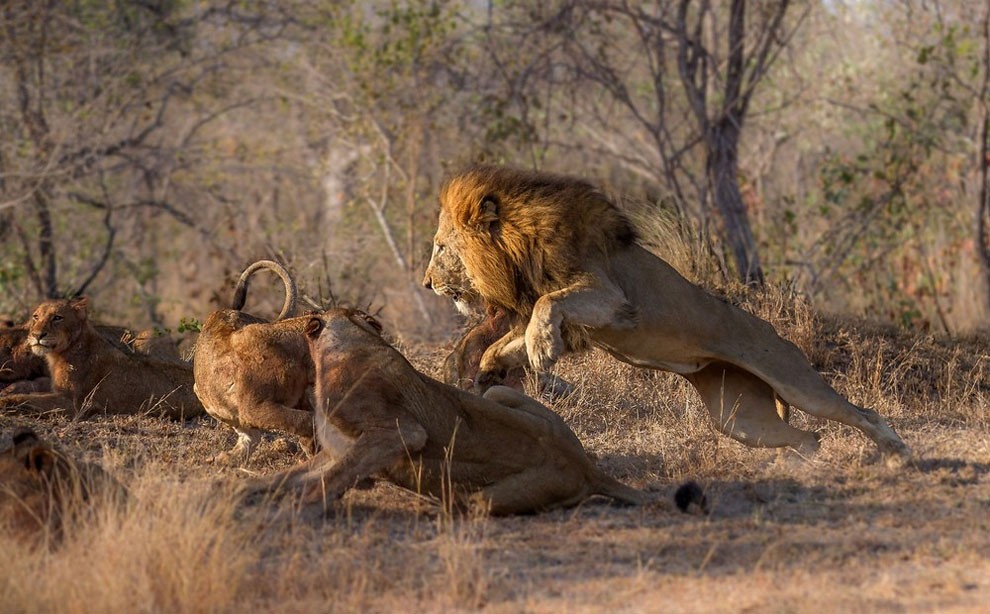 The same male lion in the previous photo now tries to disrupt and steel the carcass that the pride was feeding on. A few of the younger individuals and lionesses fought back, enticing a rage fueled-reaction from the male. The scene calmed down after this, as the male had proved his strength and the pride then settled a distance off. (Photo by Chris Renshaw) 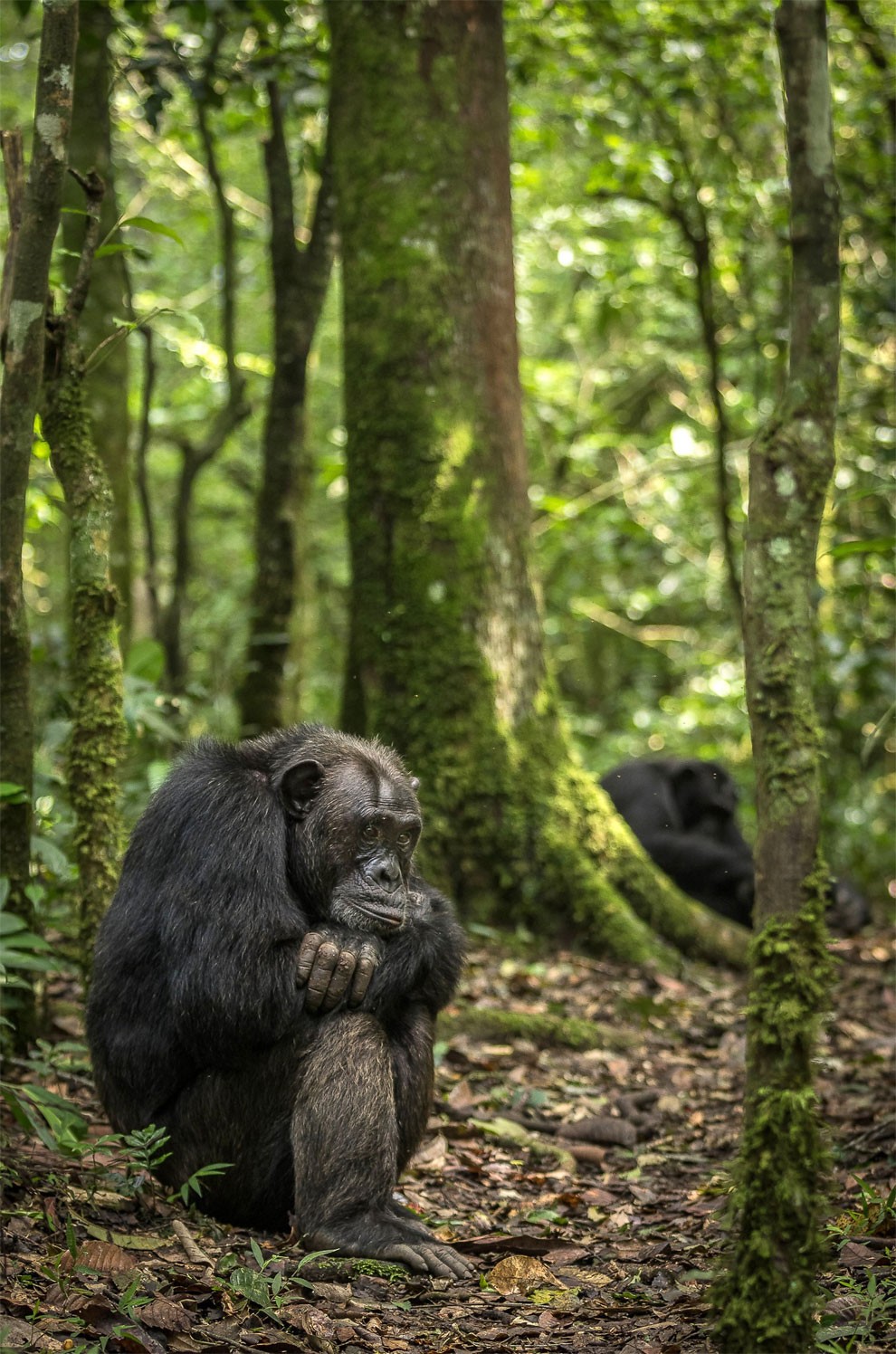 In Uganda’s Kibale forest, this male chimpanzee contemplates the days activities. At over 40 years of age, he is the dominate male of his troop. The weary look in his face and eyes showcases a lifetime of trial and tribulations in this harsh yet beautiful habitat. (Photo by Chris Renshaw) 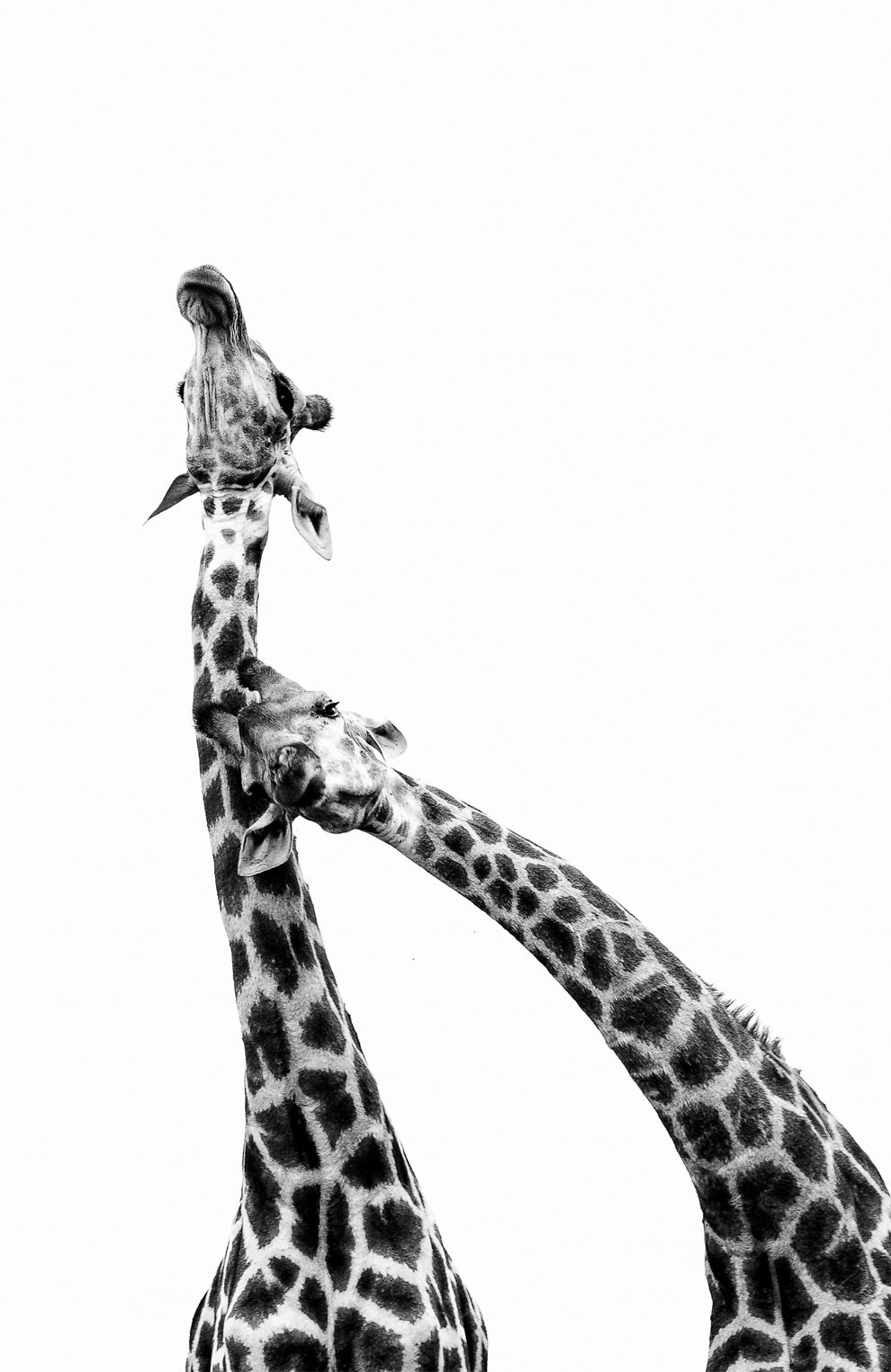 With the longest necks of all land mammals, these two bull giraffes use them in a combative fashion. What first starts out as a sparring match can quickly turn ugly as the full might of a neck, head and horns can do some damage if swung from that height. Fights determine which bull can mate, a driving force behind all animals. (Photo by Chris Renshaw) 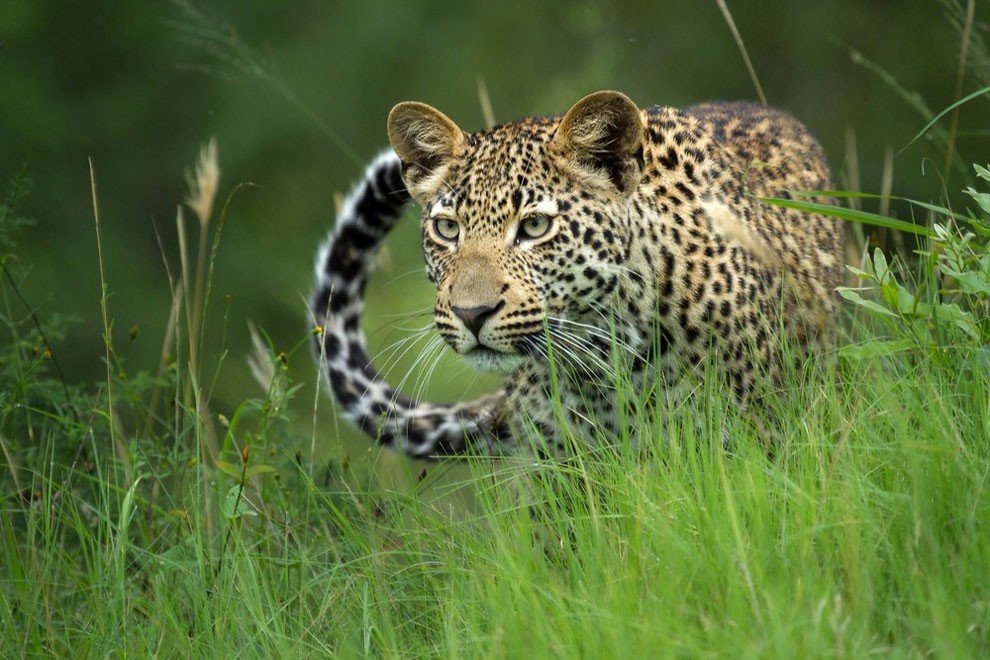 “Ever since I started visiting safari parks, to see a wild leopard was a lifelong dream. I found myself presented with the perfect subject and opportunity when this young male leopard peeked out of the grass from around a termite mound”. (Photo by Chris Renshaw) 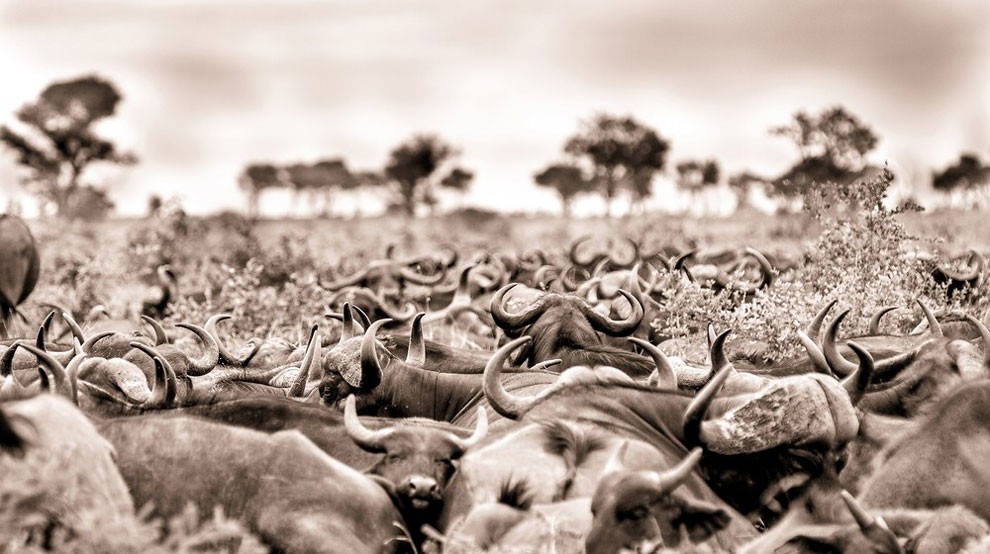 “Like a battalion of beasts, this African Cape buffalo herd settles down for the night. They settle in this manner to protect them from marauding predators, which are hoping to infiltrate their ranks. The sheer number of horns and the size of the herd is what I was trying to capture, evoking a sense of strength and unity,” observes Chris. (Photo by Chris Renshaw) 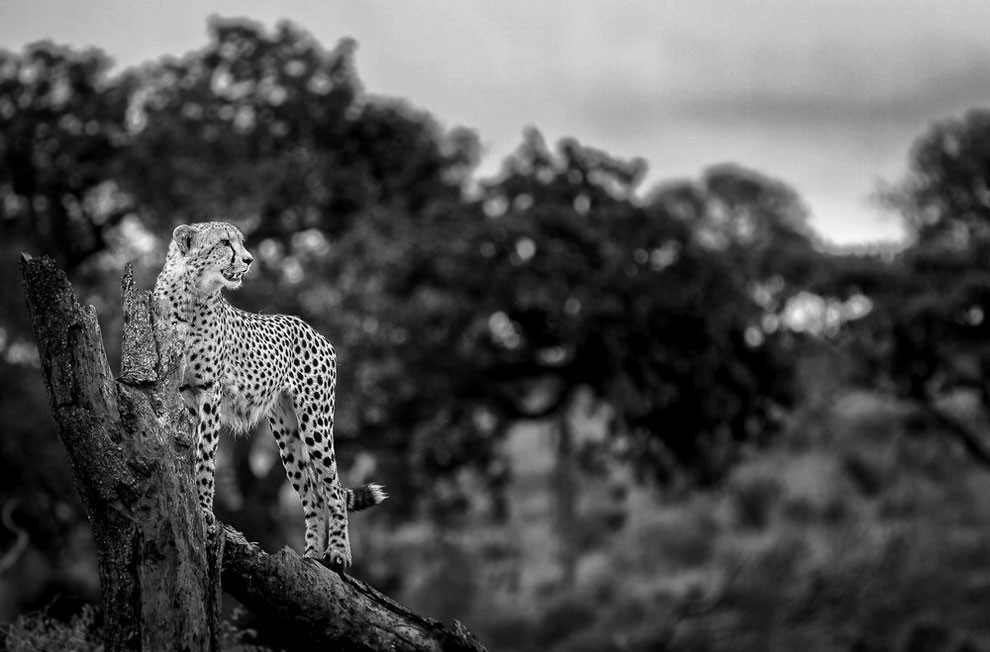 The fastest animal on the planet, the cheetah. This male uses a fallen tree for elevation to scan for any prey species. Chris shares, “the dark background and depth of field made this image special for me. It also encapsulates the regal nature that cheetah’s exude”. (Photo by Chris Renshaw) 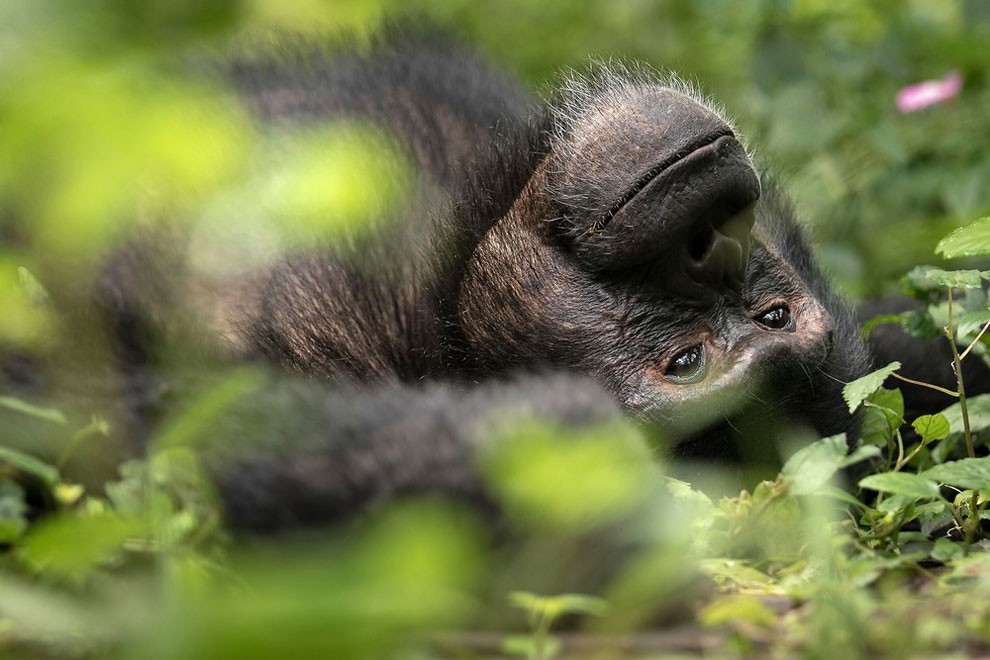 A subordinate, younger carefree male chimp relaxes on his back while the rest of the troop sleeps. This image is in sheer contrast to the previous one, showing the different responsibilities of age within a chimpanzee troop. (Photo by Chris Renshaw) 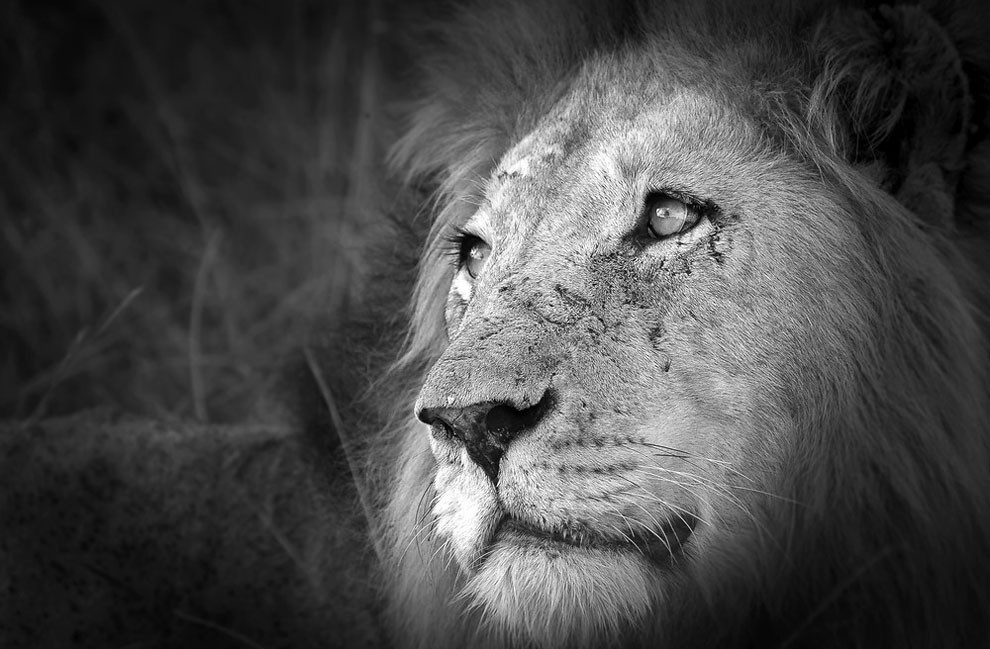 The face of a truly wild male lion can tell a story of a hundred battles and a thousand hunts. To be a male lion means that you live by the sword and die by the sword. Always on the lookout for potential enemies and prey, this male showed a softer side as he looked up at his approaching cub. (Photo by Chris Renshaw) 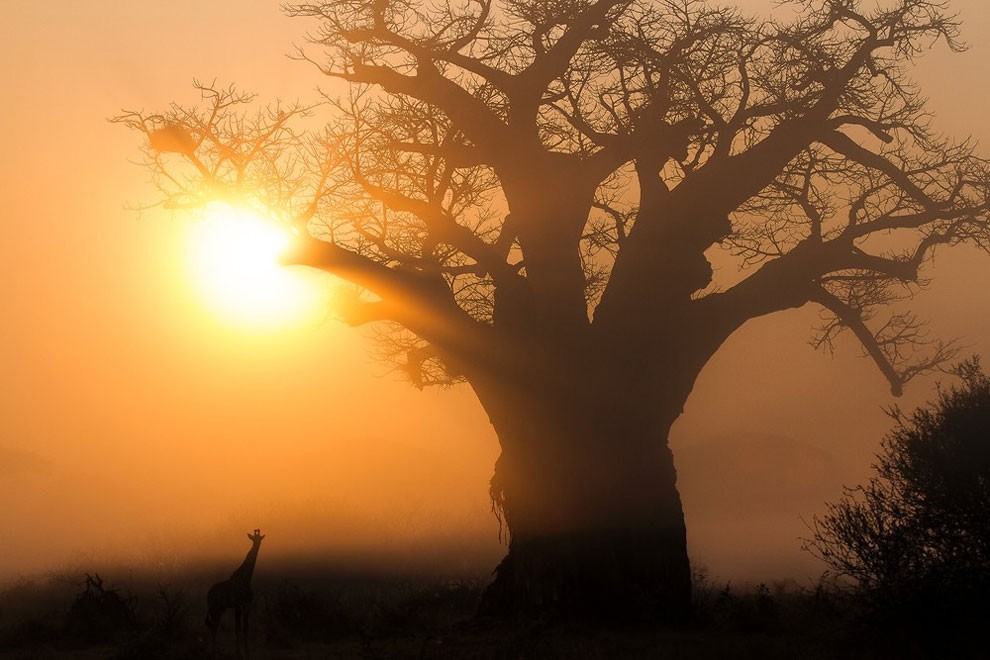 “I think this image speaks for itself. Two iconic species of the African continent, backlit by a sunrise. A Baobob tree and a giraffe stand serenely on a perfect morning, a new day in Africa”. (Photo by Chris Renshaw)

Photographer Recreates Iconic Photos With John Malkovich As The Main Subject
This Man Drives Several Hours Everyday To Bring Water To Thirsty Wild Animals
Photographer Paul Clifton Perfectly Captures A Brutal Beauty Of Classic Motorcycles
Newborn Clouded Leopard Cubs, Tacoma, Washington
Hang 20 Surf Dog Classic
Photographer Explores the Beautiful Diversity of Redheads
The Most Expensive Cat Toy That Your Cat Might Actually Play With
Feeding Polar Bears From A Tank, 1950
UK Astronomy Photographer Of The Year 2016 Shortlist
Samsung Everland Zoo in Photos by In Cherl Kim
Russian Photographer Brings Fairytales To Life In Stunning, Breathtaking Images
National Geographic Unveils Its 50 Most Beautiful Travel Photos Of 2016’s
Adult Onesie With Cozy Kangaroo Pouch Lets You Carry Your Cat Wherever You Go
UK Landscape Photographer Of The Year Awards
People Are Doodling On Snake Pics And The New Scenarios Are Hilarious
Photographer Continues To Dress Up Rescued Dogs To Draw Attention To Their Stories
Finally, The 2022 Pooping Dogs Calendar Is Here. Now With a Puzzle.
Stuning Entries For The 2018 Nat Geo Travel Photographer Of The Year Contest
Winners Of The 2017 National Geographic Travel Photographer Of The Year
Polar Bear Floats Adrift Surrounded by an Endless Sea of Icebergs
Miniature Donkeys Are The Best Friend Anyone Ever Had
This Dog Has A Wheelchair Made Out Of Children’s Toys
Photographer Took Stunning Macro Pictures Of Beautiful Dew Drops
Photographer Sabrina Boem Beautifully Captured The Monorail Cats
africa, award, geographic, photographer