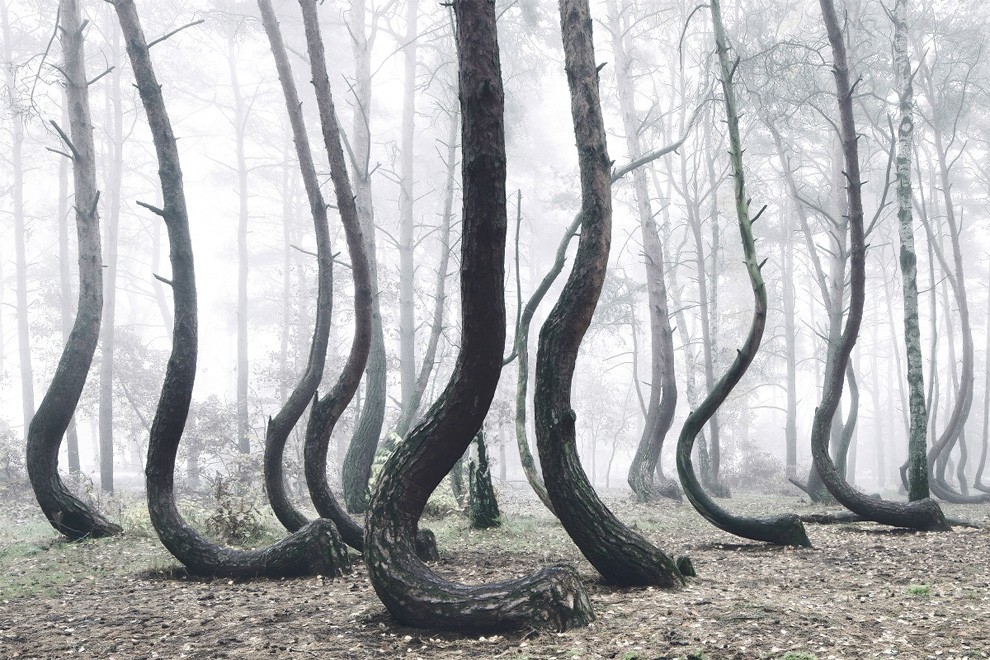 Located just outside of Nowe Czarnowo, West Pomerania, Poland, there lies a pine grove known as the “Crooked Forest.” It is one of the most unusual forests in Central Europe. What makes this grove of approximately 400 trees so bizarre is that instead of growing naturally, each tree is bent at 90 degrees near the base, causing a wide arc to the top. 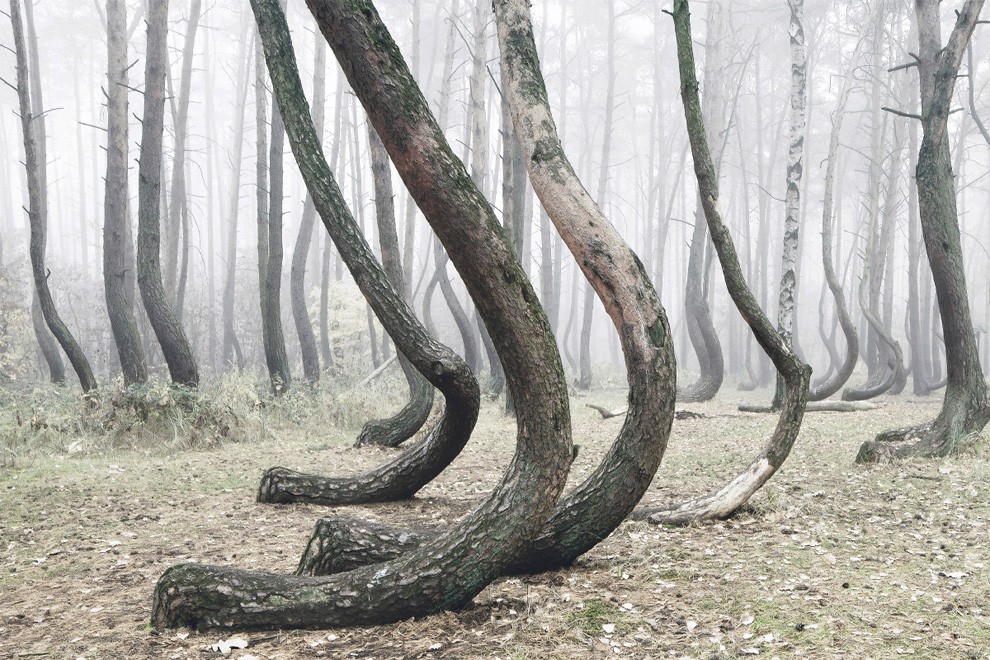 Stranger still, all stems are bent in the same direction: due North. The pines were planted around 1930, and to this day there is no definitive answer as to why the trees are so oddly shaped. 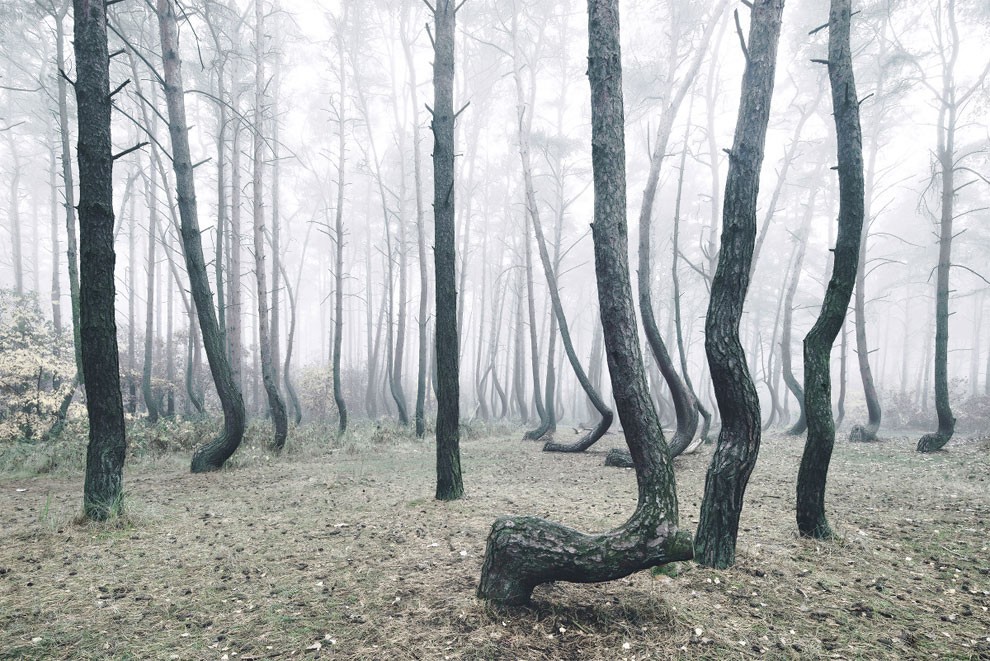 It is generally accepted that some form of human tool or technique was used to bend the trees, though method and motive are unknown. There has been speculation that the trees were deformed to create curved timber that could be used for furniture or boat building. 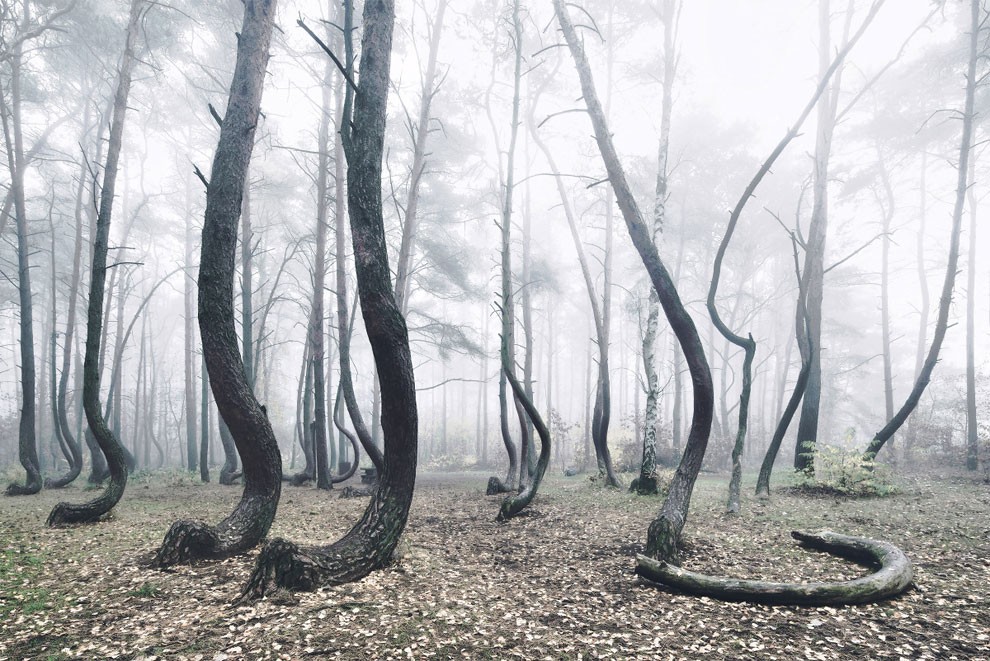 Another theory is that a snowstorm knocked the trees askew, though the real story behind the mysterious forest has never been revealed. The peculiar pines and the mystery behind their curved spines has led to a range of rumours in the depths of the internet, from witchcraft to energy fields. Whatever the cause, the forest makes for an ominous spectacle, captured in all its spooky glory by photographer Kilian Schönberger. 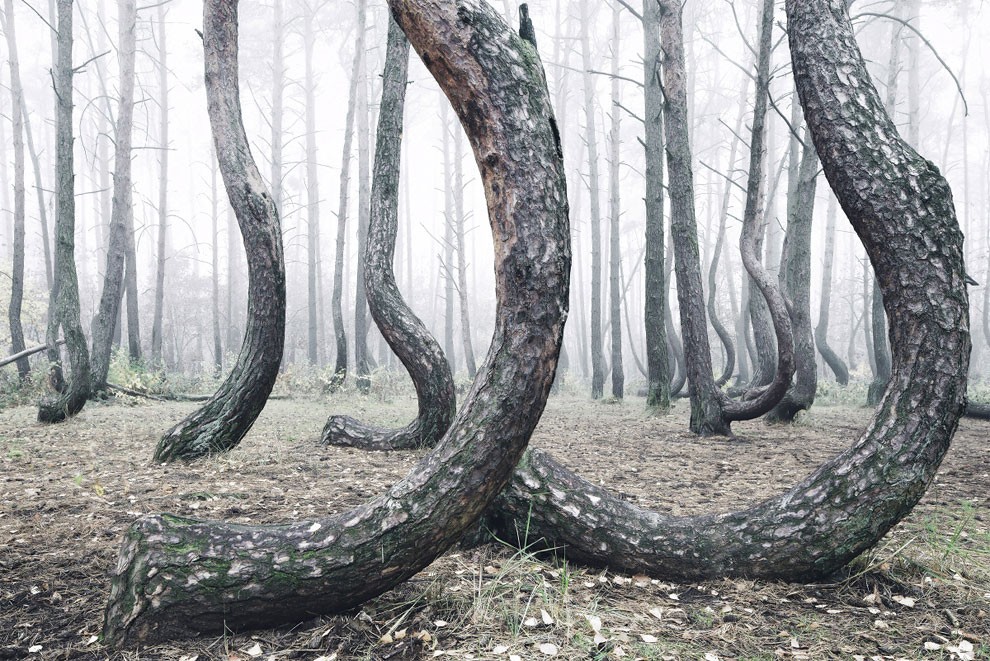 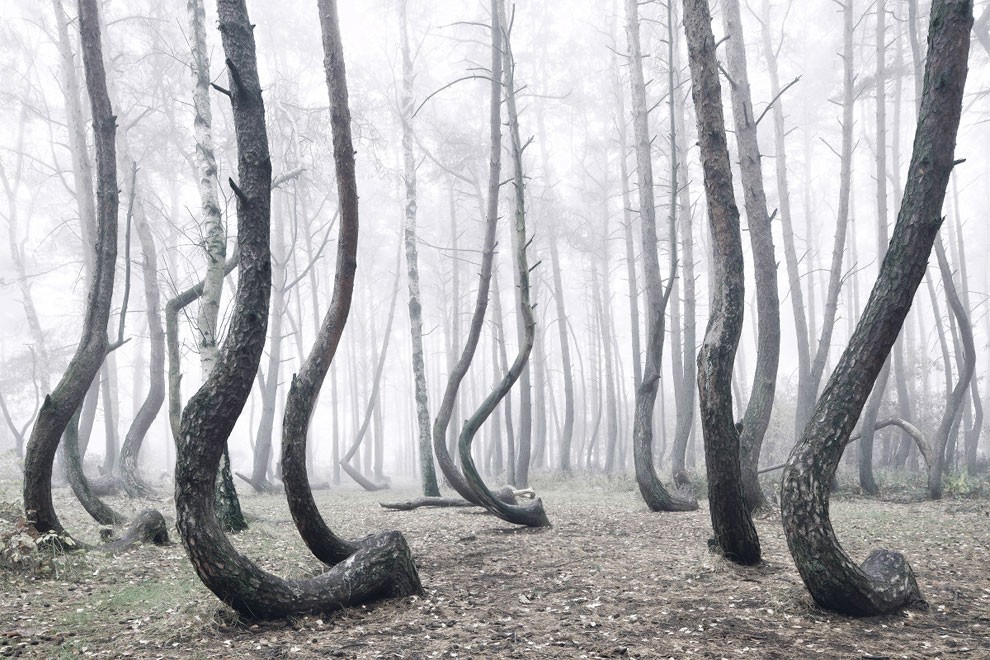 Via My Modern Met, Colossal

T-Rex Wedding Photo Shoot Proves Love’s Not Dead
"Future Cities": Distorted Cityscapes by Ruben Frosali
Animus: Women As Women. Women As Men.
Completely Terrifying ‘The Last of Us’ Cosplay by Emma Franks
PIXERS: Your Walls & Stuff
Fascinating Images from the Past You Won’t Find in Any History Textbook
Redheads Of Czech Republic In A Photo Shoot That Will Make You Dye Hair Red
Polish Photographer Ewelina Zych Proves You’re Not A Real Photographer In Slavic Country If You Don’t Have A Rural Photo-Shoot
The Spectacular Winners Of The 10th iPhone Photography Awards
Winners of the Royal Navy Peregrine Trophy Photography Awards
Bizarre Cameras Used Before GoPros Existed – This Is How People Filmed Their Stuff
Photographer Jakub Wencek Explores The Forests Of Poland To Capture Fantastic Photos Of The Dark Side Of Nature
Breathtaking Underwater Photography By André Musgrove
Beautiful Kodachrome Photos of Life in New York in the Late 1960s
Beautiful Winning Photo Works Of The 2018 Environmental Photographer Of The Year Contest
Jack London’s Extraordinary Photos of London’s East End in 1902
Fearless Genius: The Digital Revolution In Silicon Valley 1985-2000 In Photographs By Doug Menuez
Russian Silver Age Poet Sergey Yesenin Become An Instagram Star
Primary Colors
Breakfast in Bed: Extraordinary Color Photographs Revealed the First Class of Air France in the 1950s
Vintage Photographs Of People Posing With Job Hunting Signs On The Streets During The Great Depression
Gorgeous Photos of American Actress and Model Joan Staley in the 1950s and ’60s
Truthful Images That Show Why Holocaust Memorial Selfies Are So Disrespectful
Candid Snapshots Capture Everyday Life Of Vancouver Youth In The 1970s
crooked, forest, mysterious, poland, populated, trees