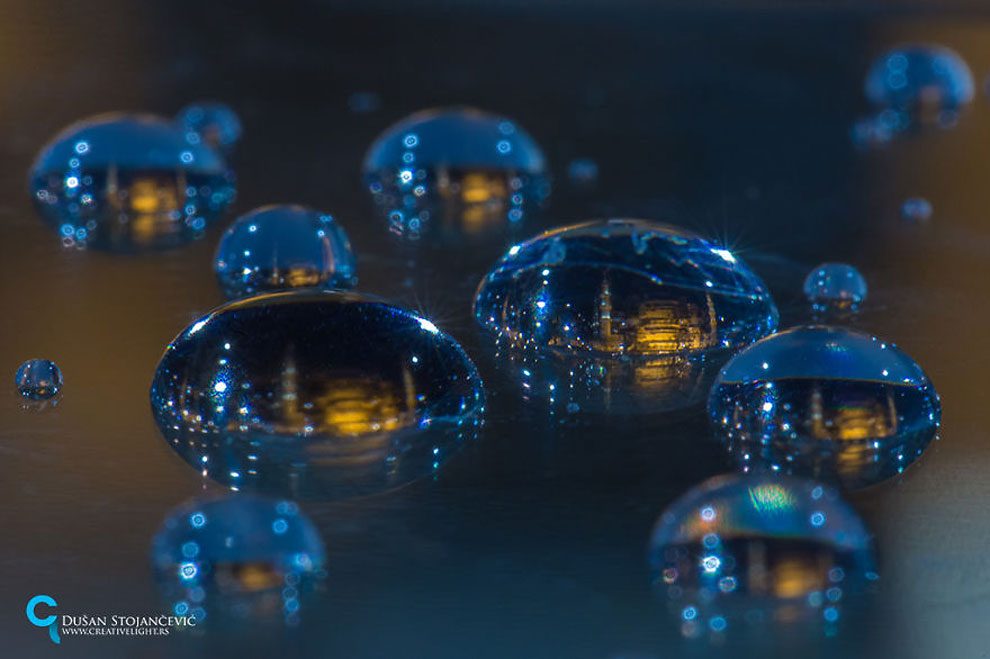 Photographer Dusan Stojancevic depicts metropolises contained within tiny droplets of rainwater. For the past 15 years, he has revealed minuscule cityscapes that hide in the beads of liquid. Towering buildings, expansive bridges, and glittering lights are reflected in the tiny dots sitting on metallic surfaces. They’re visually divorced from the actual piece of architecture they’re echoing and instead offer a surreal look into seemingly alien worlds. 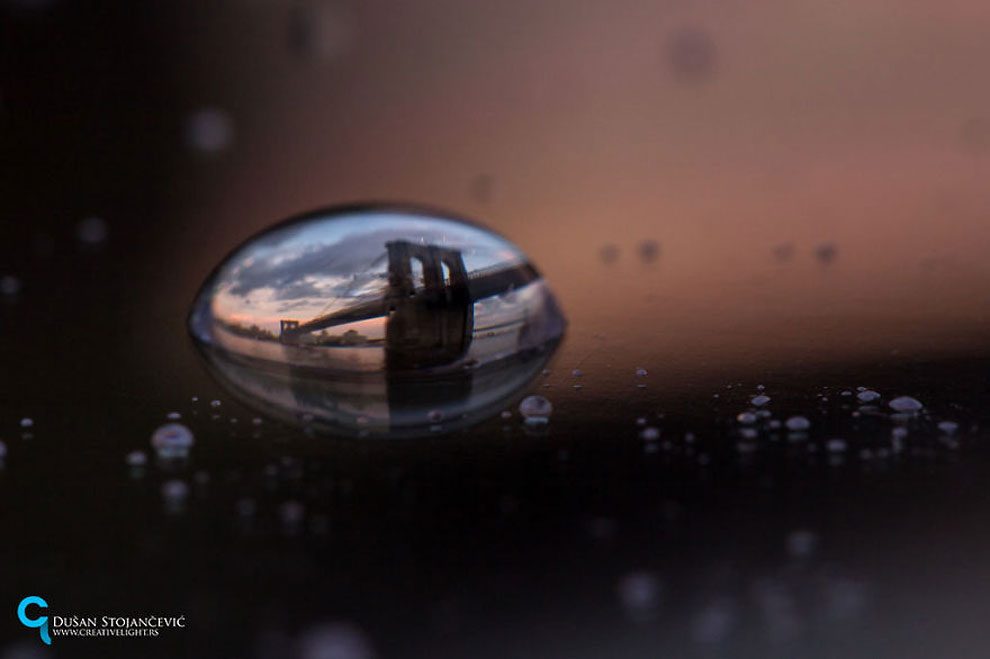 “Some of the photos are on film, but most of them are digital, but it is a macro photography technique, not a Photoshop, that is why it has flaws in sharpness and a lot of blurs. But that is something that gives some kind of artistic touch to it. I need to say that I was a bit lazy to do it earlier, but I tend to do this kind of photos when I go to some new place in the World. So I will try to update it on my next journeys.”, Dusan told Bored Panda. 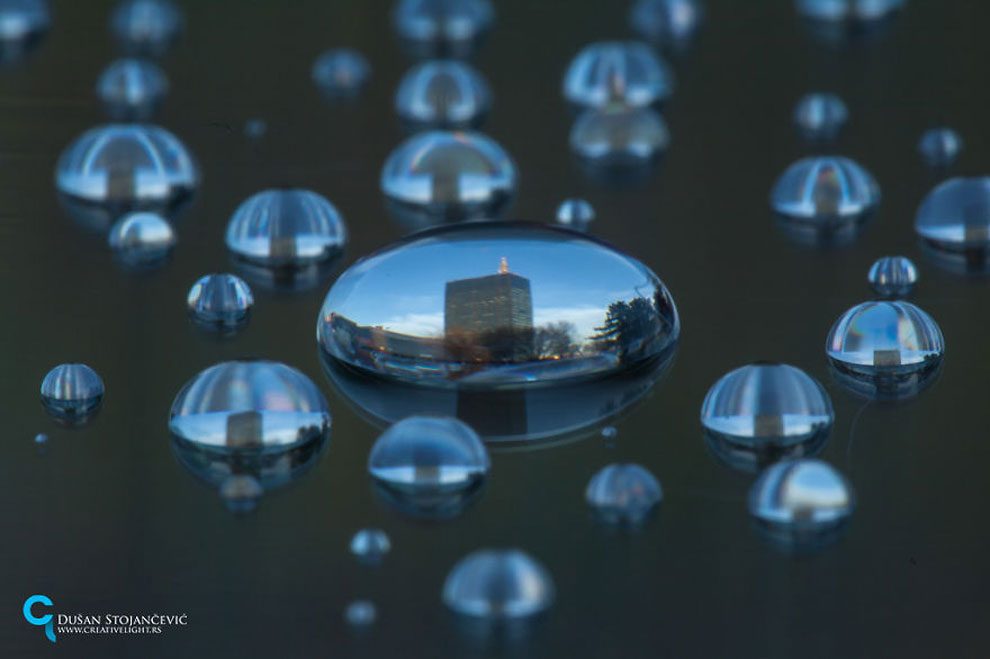 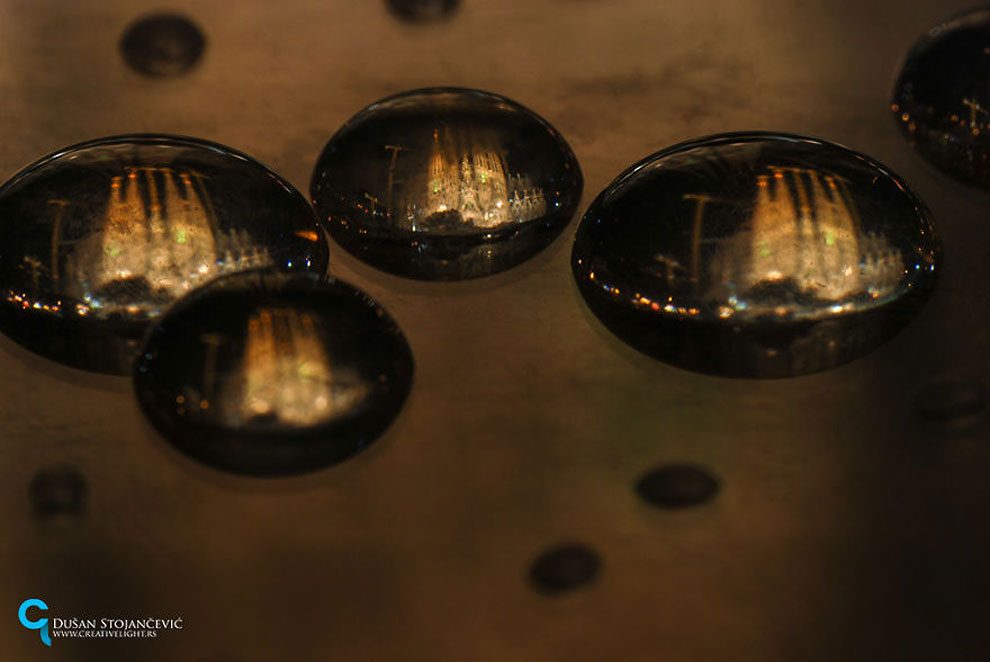 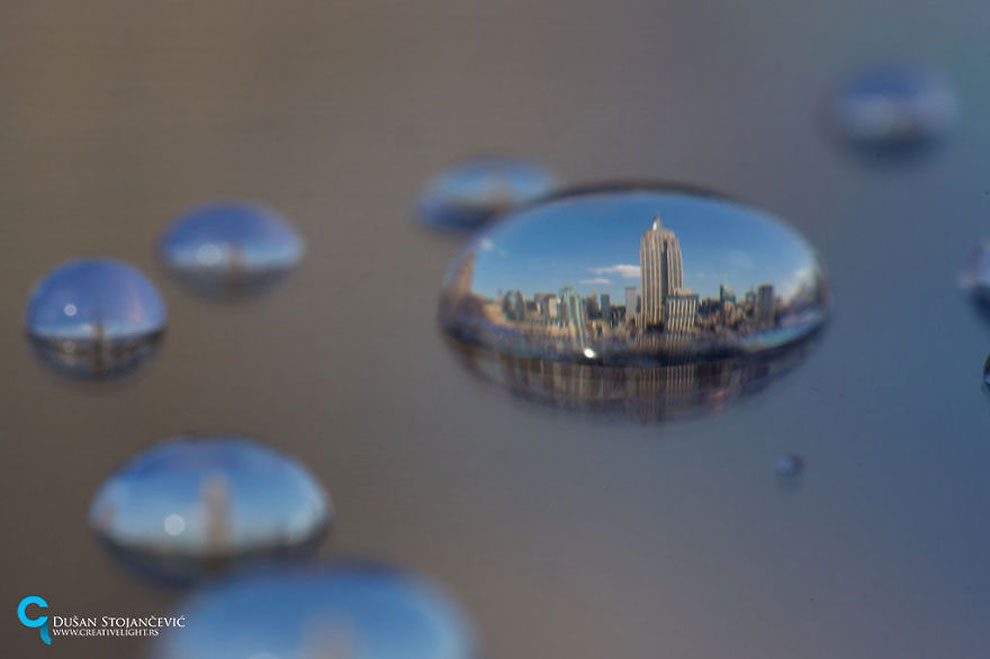 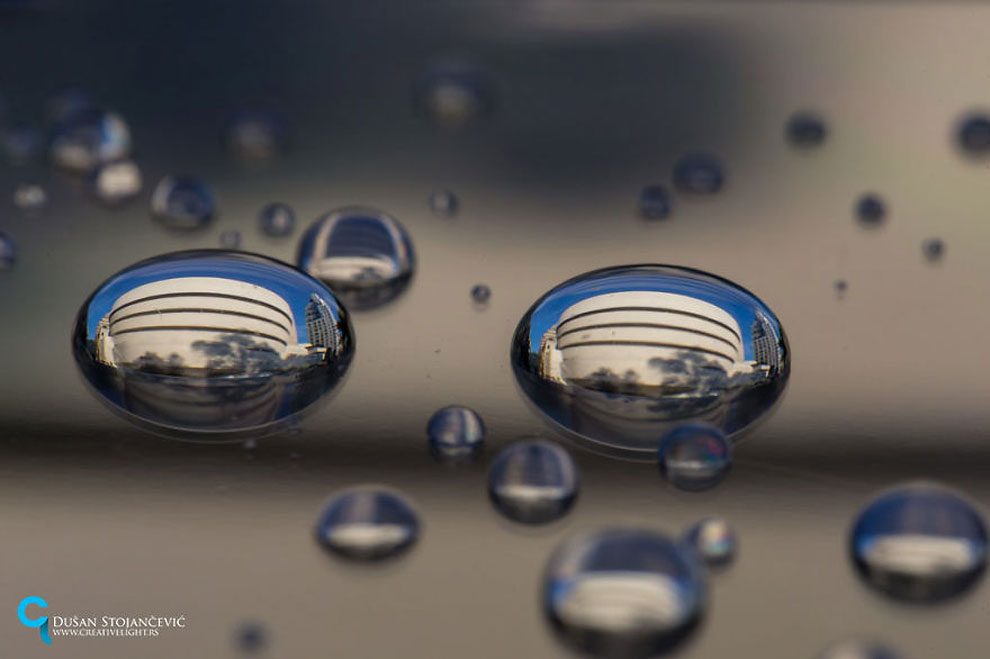 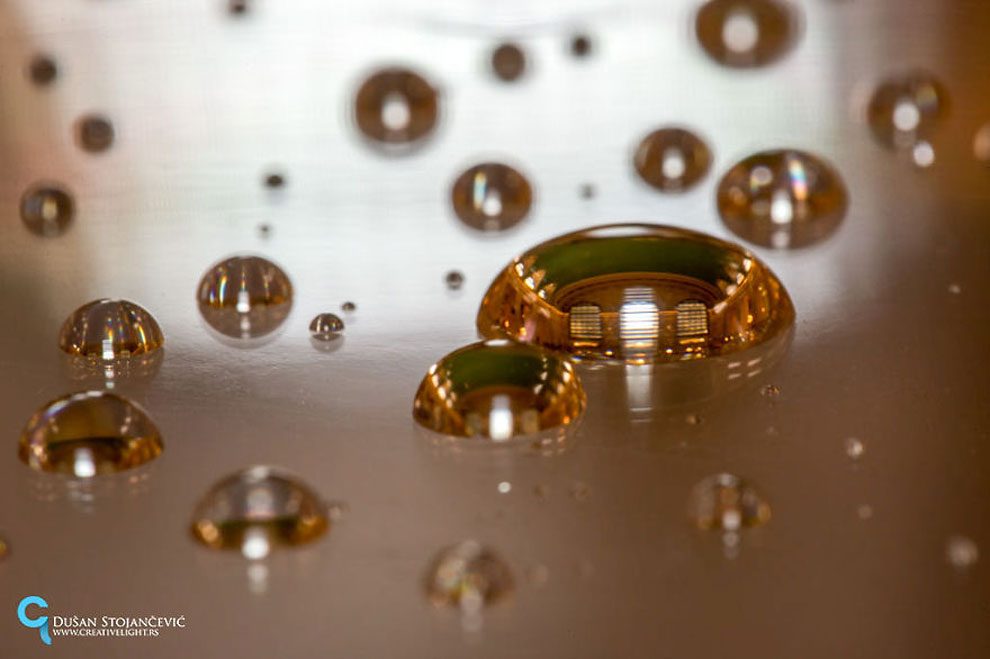 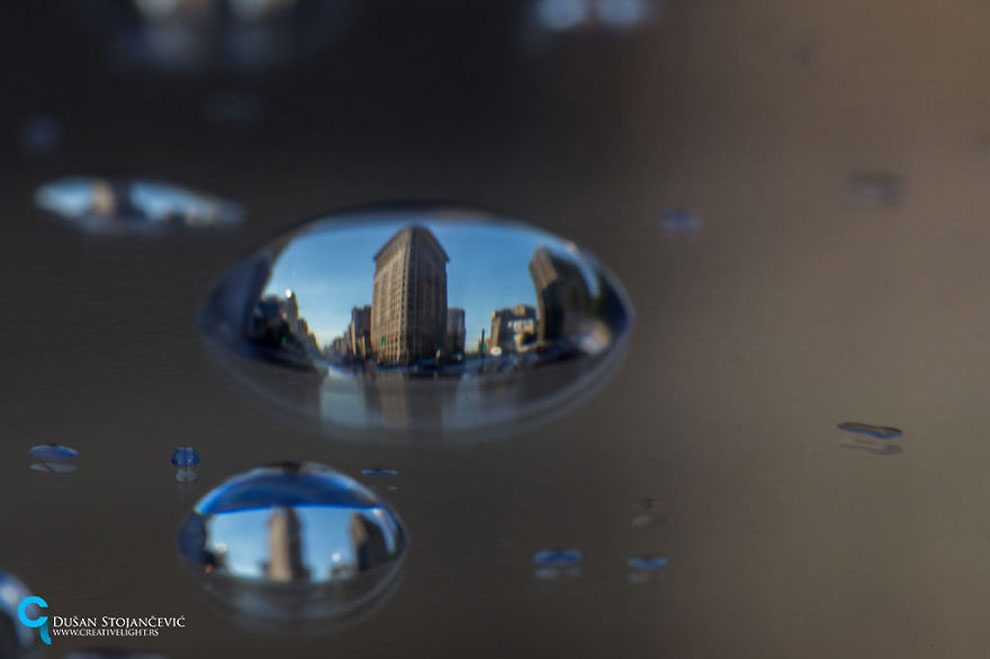 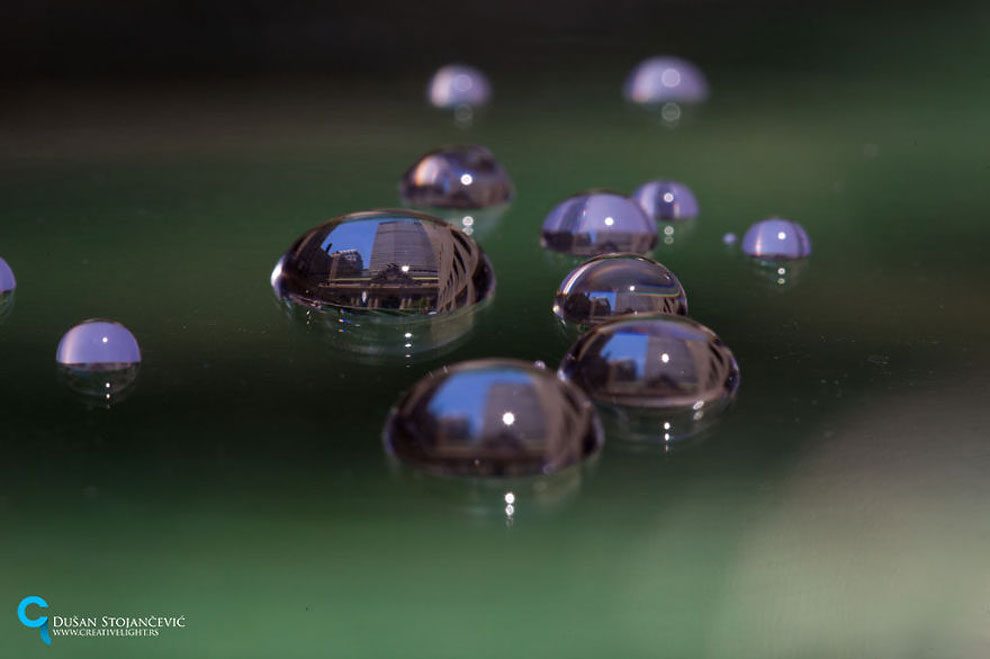 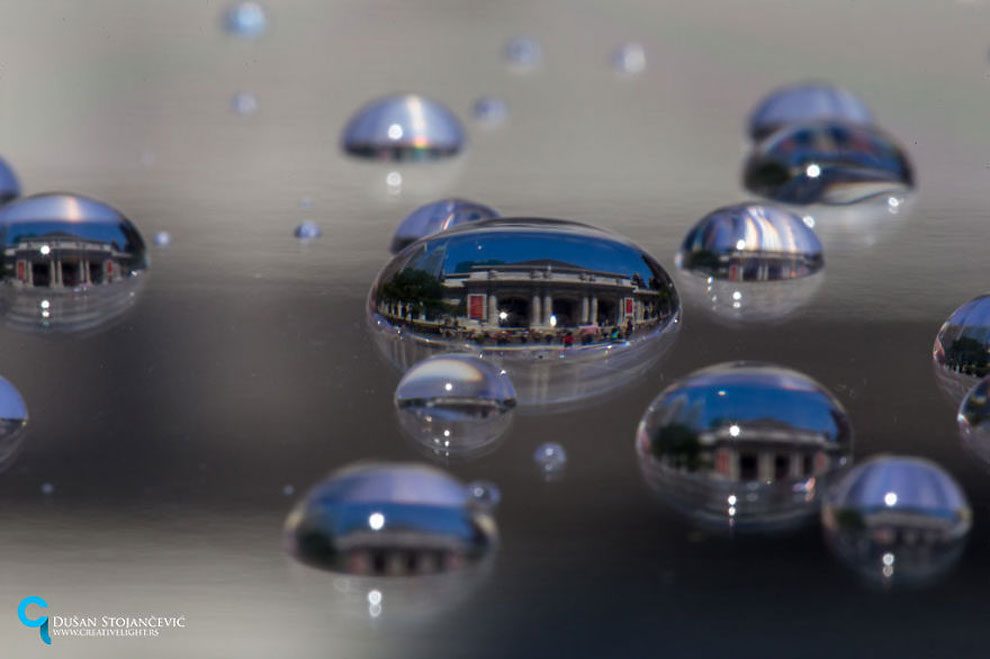 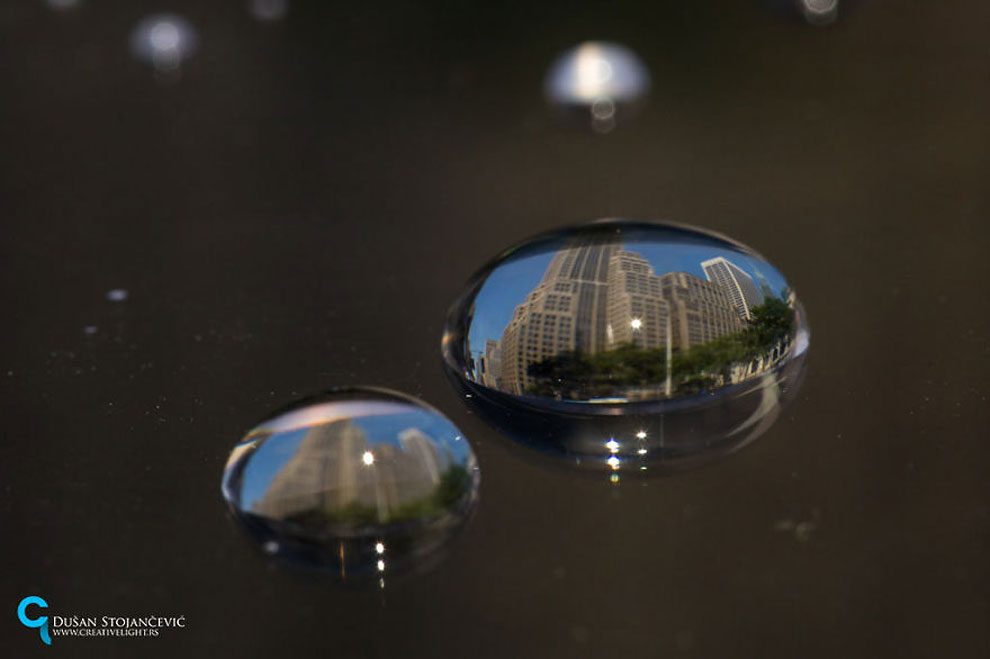 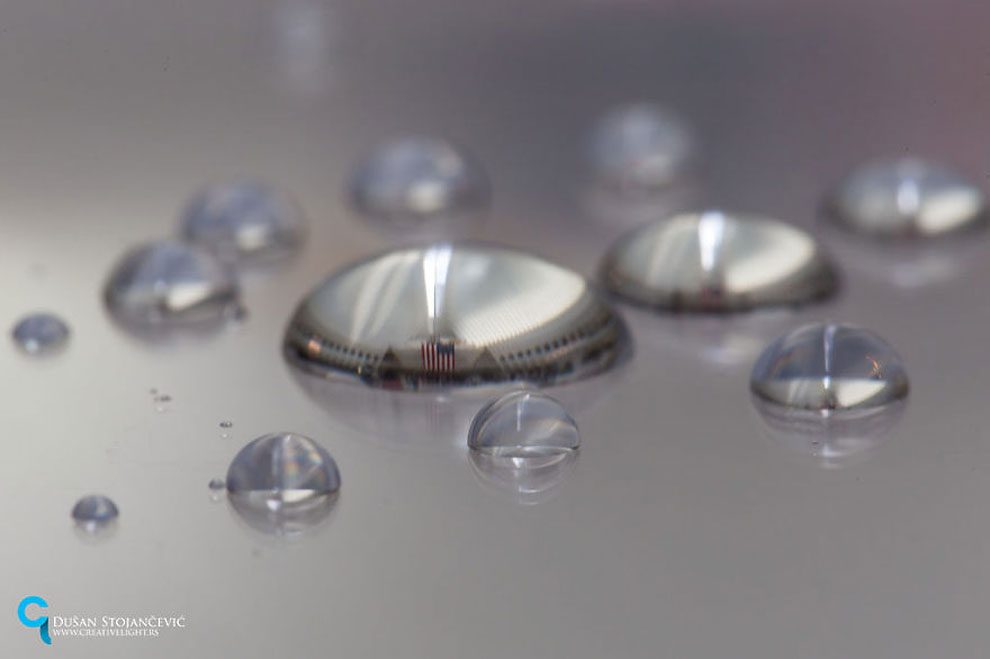 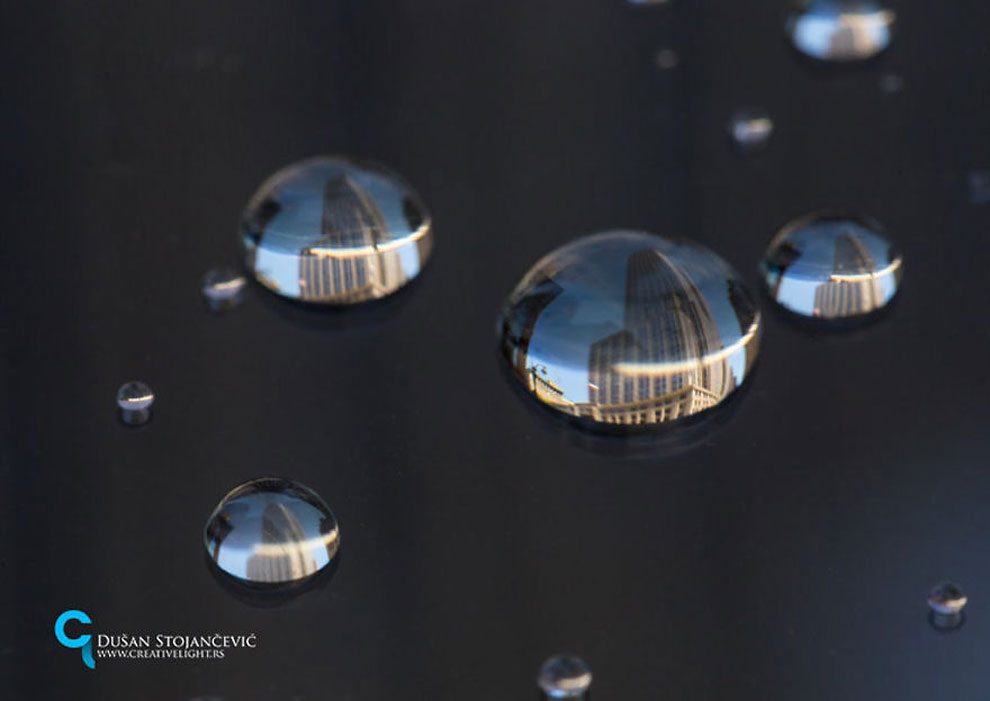 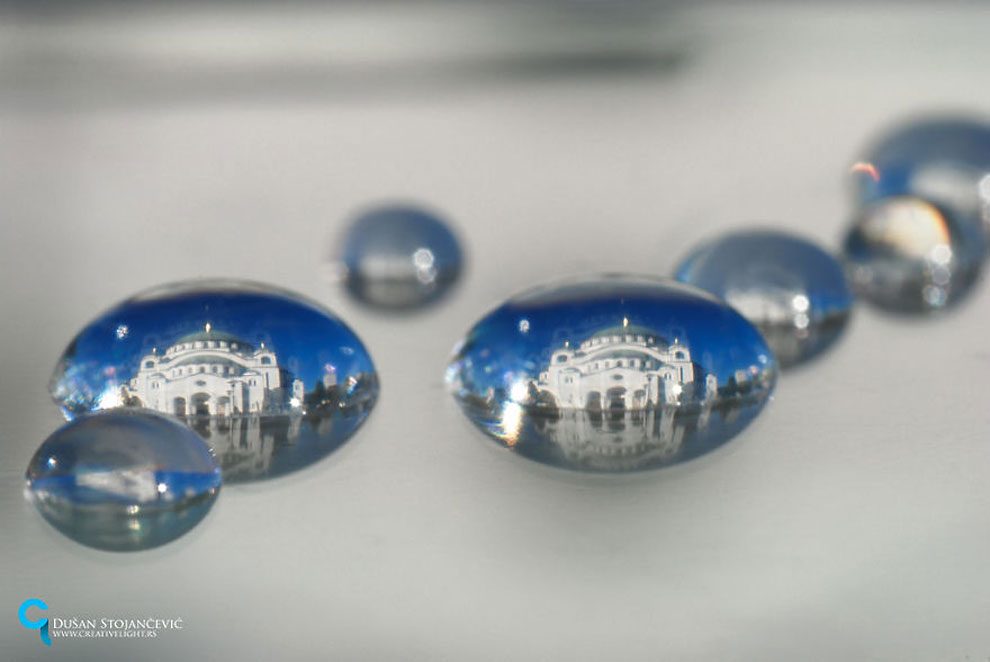 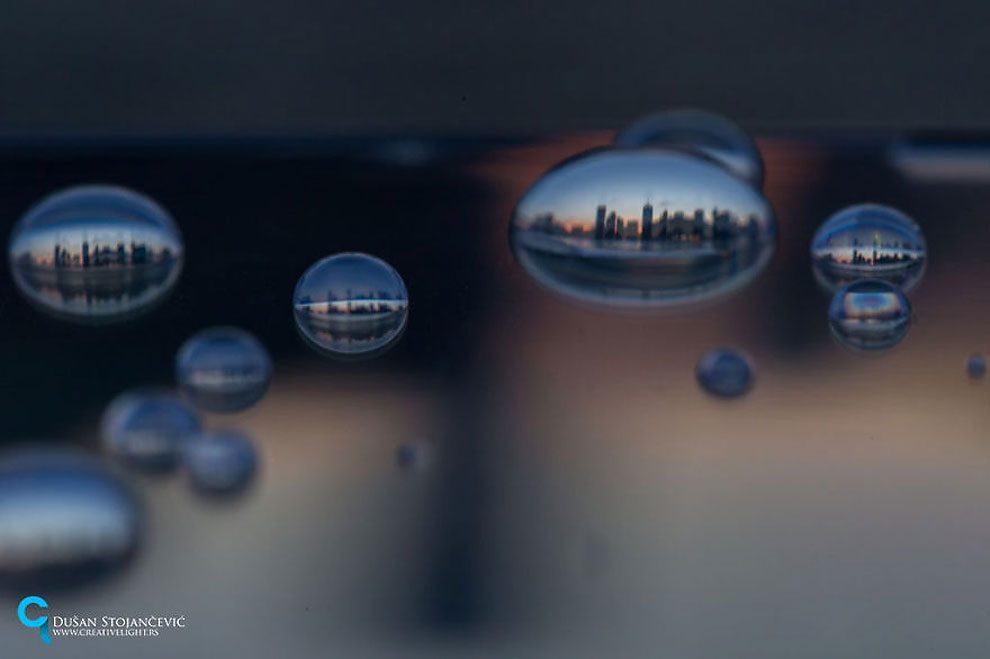 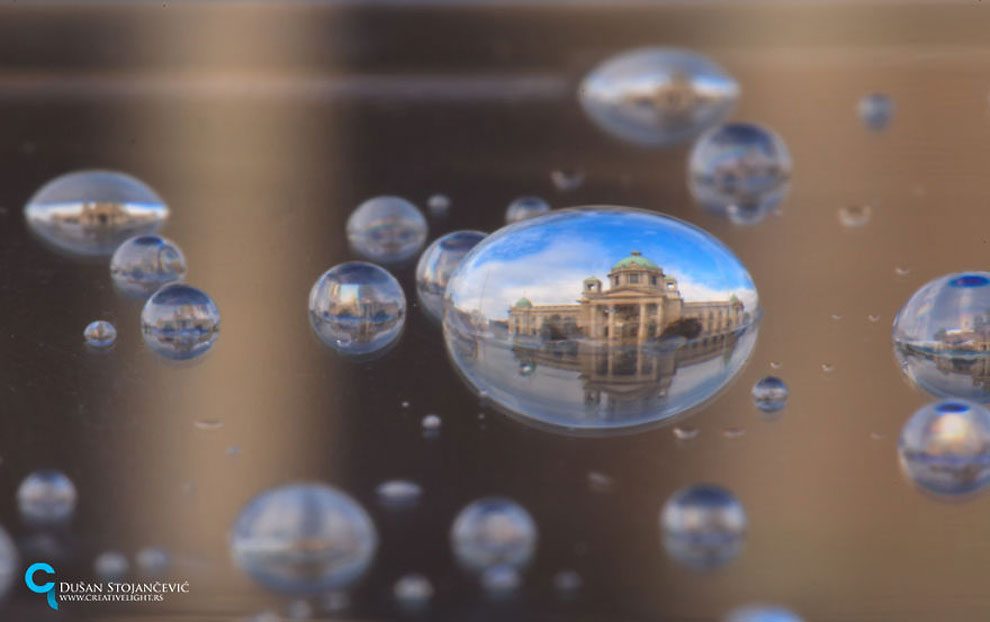 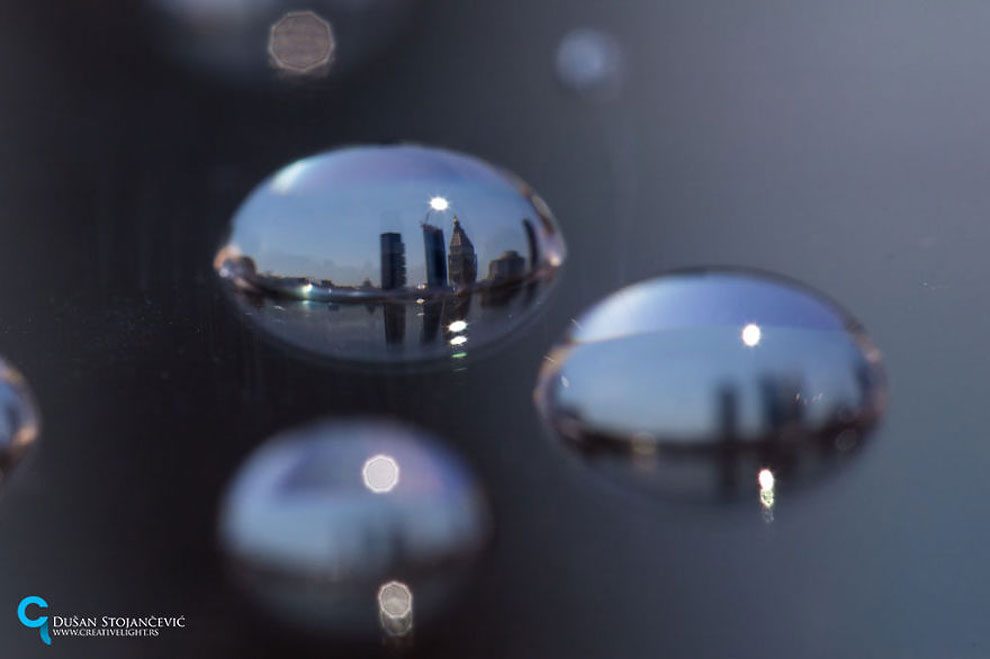 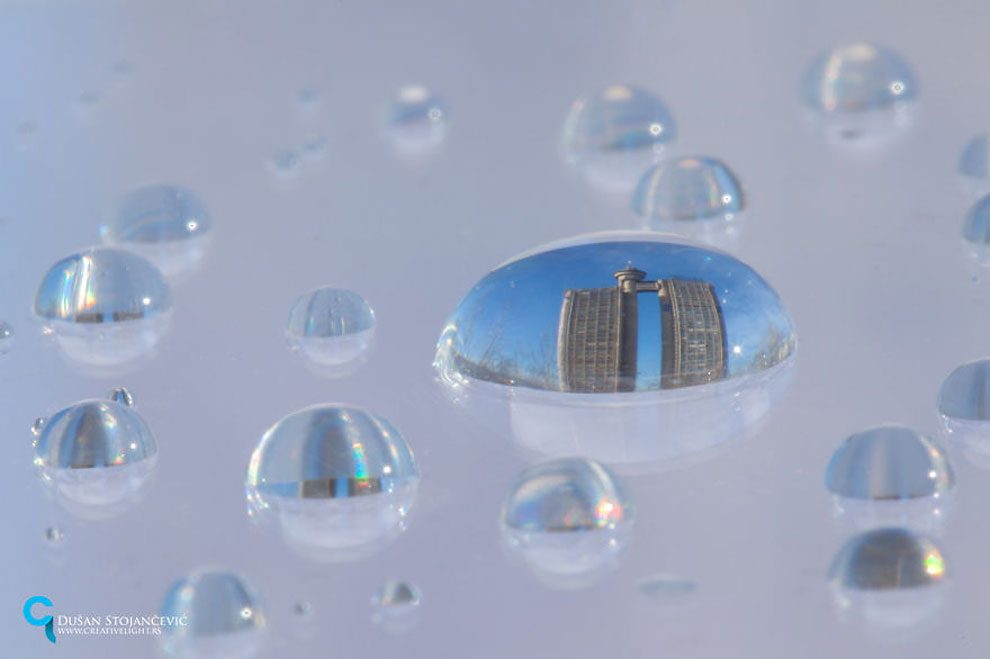 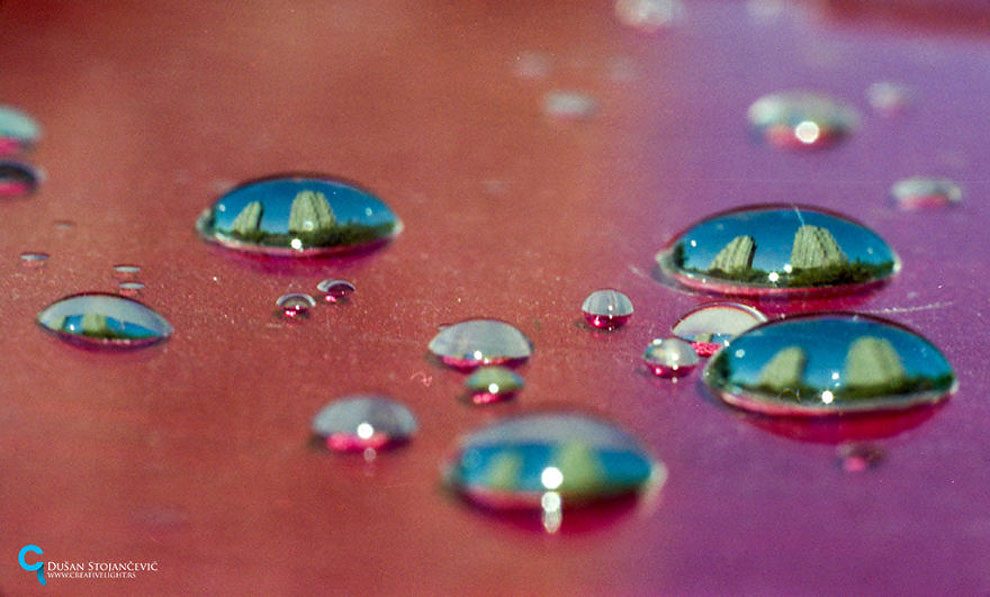 Curious Deer Photobombs Baby's Photoshoot and Turns It into a Magical Portrait
Hobby Buddies: Ursula Sprecher And Andi Cortellini’s Weird And Wonderful Photos Of Clubs
Sony World Photography Awards 2016 Winners
The Mysterious Woman Who Ticking Military Men Under Their Chins While Taking Pictures in the Photo Booth in the 1940s
Brazil Through The Lens Of David Alan Harvey
Failed Animals Panoramic Photos That Are Worse Than You’d Think
Powerful Portraits Show The Faces Behind The Women’s March On Washington
Pet Photographer Cat Race Is Taking Beautiful Photos Of Canines All Over The World
Fine Art And Dark Beauty Portrait Photography By Haris Nukem
Beautiful Photo Portraits Of Australian Women Painted In Vibrant Colors
Rare And Beautiful Photos Of 18-Year-Old Freshman Madonna At The University of Michigan In 1976
Beautiful Vintage Photos Of The Circus Girls Of Sarasota Taking A Break In 1949
Wonderful Cactuses And Desert Plants Photography By Wachirapol Deeprom
Photographer Denis Demkov
This Artist Has Put Together An Amazing Photo Set Of Peope Blending Into The 7 Wonders Of The World
Enchanting Photos From Disneyland’s Opening Day
Inspiring And Glamorous Female Portrait Photography By Shibbi
19-Year-Old Student Hides Spy Camera In His Clothing To Take Secret Street Photos In The 1890s
Disney Princesses Reimagined Years Later As Queens By Daughters And Mothers
Photographer Spent Two Weeks In Iceland To Shoot The Recent Fagradalsfjall Eruption
Greta Oto - The Glasswinged Butterfly
Neil Zeller's Snaps Were Taken Across Canada, Where He Photographs The Northern Lights Dancing Across A Dark Night Sky
Inside the Exclusion Zone: No-Man's Land Attests to Japan's Fallout
1980s: The Period Of Women Rock Hairstyle Boom
captured, cityscapes, entire, macro, photos, within