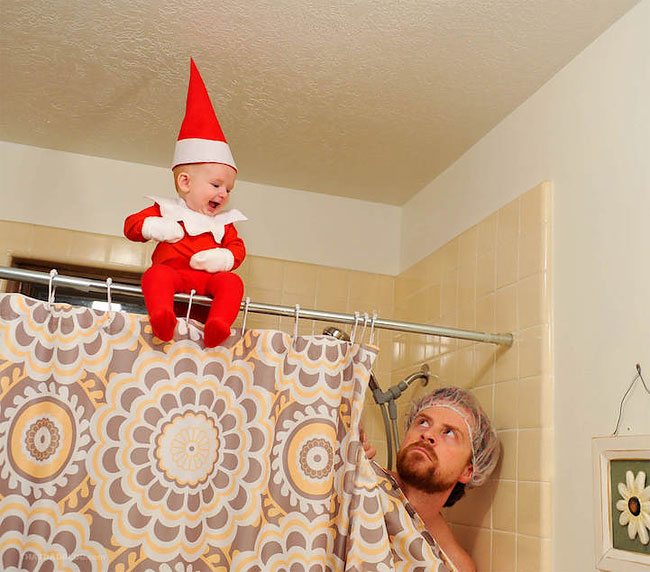 Photographer Alan Lawrence is now creatively celebrating the holidays with his 4-month-old son Rockwell. Instead of buying his kids an Elf on the Shelf, the dad instead went in a different direction: he made Rockwell the elf. 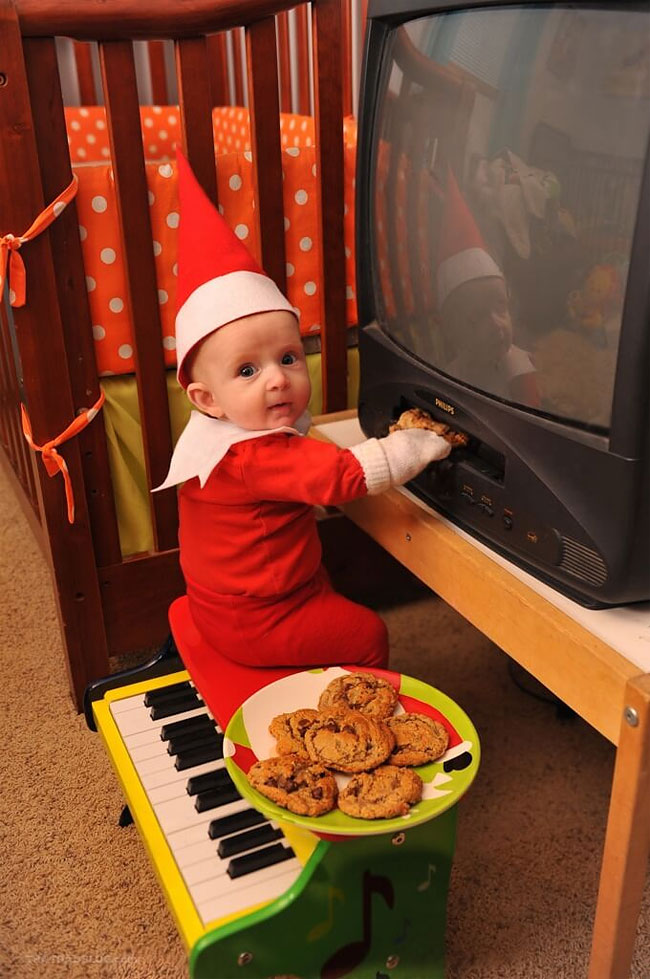 “We have never had an Elf on the Shelf in our home but the idea has always intrigued me. Parents letting elves in their homes to watch their kids and cause mischief,” Lawrence explained to BuzzFeed. 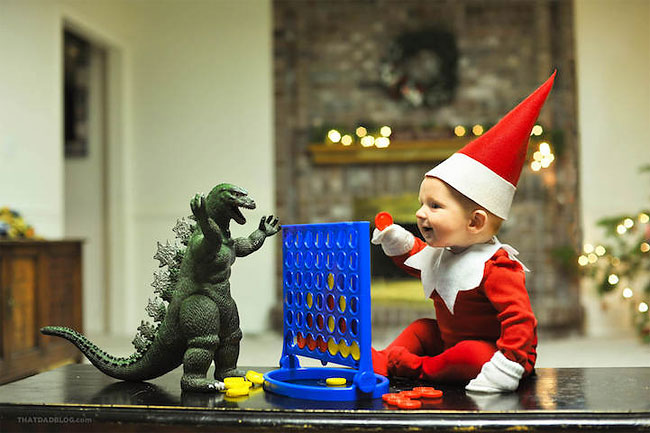 “Then one day someone told us that Rockwell looked like an elf and the idea came to me. What if a real life elf came to live with us for the holidays and how would I react in real life to having it show up to live with us?” 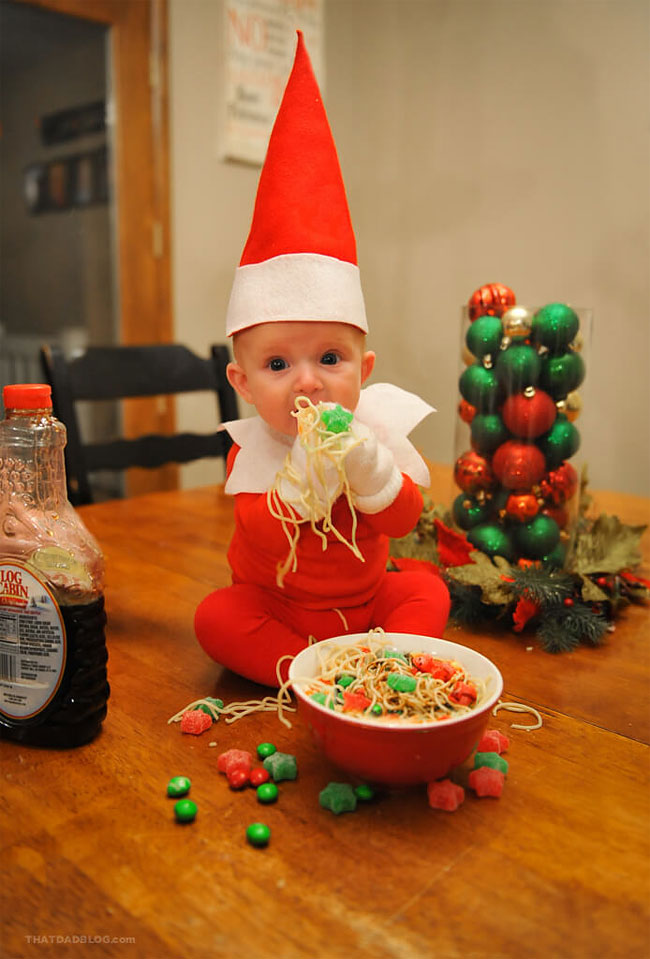 Lawrence soon had an answer to his question because Rockwell was transformed into an absolutely adorable elf. In his bright red costume (complete with a pointy hat), the little boy can be seen playfully causing mischief all over the house, each of his high jinks caught in a sweet series of photos. Beneath each image, Lawrence writes a story that adds to the fun nature of this project, which he hopes to continue every day until Christmas. 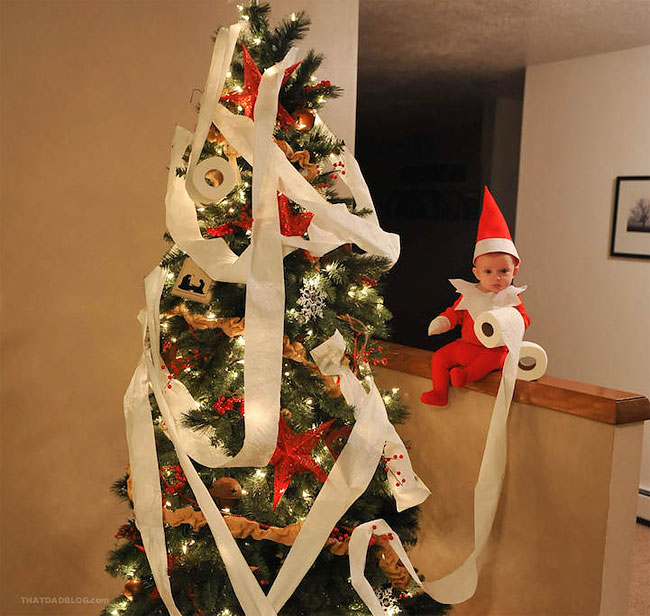 “We love sharing our family’s story,” says Lawrence. “I just feel blessed to be a dad and want the world to know how fun it can be when you don’t take life so serious.” 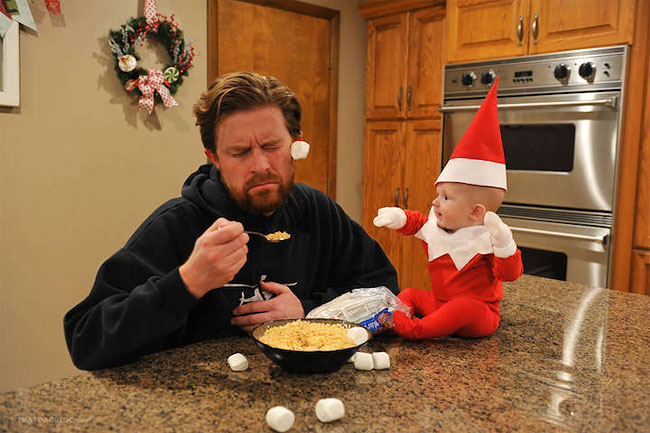 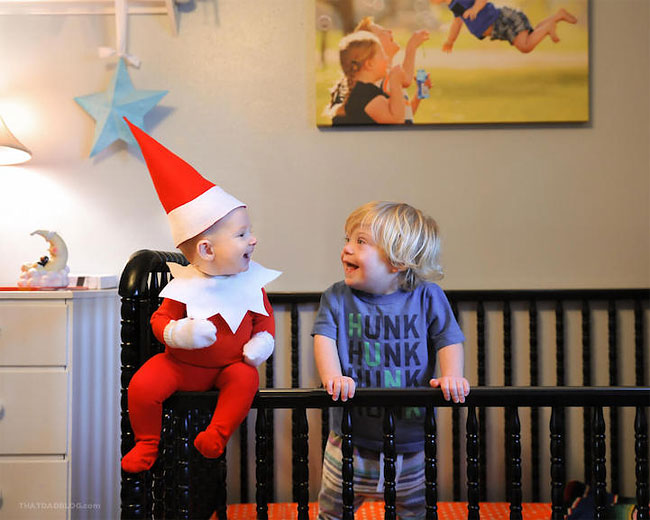 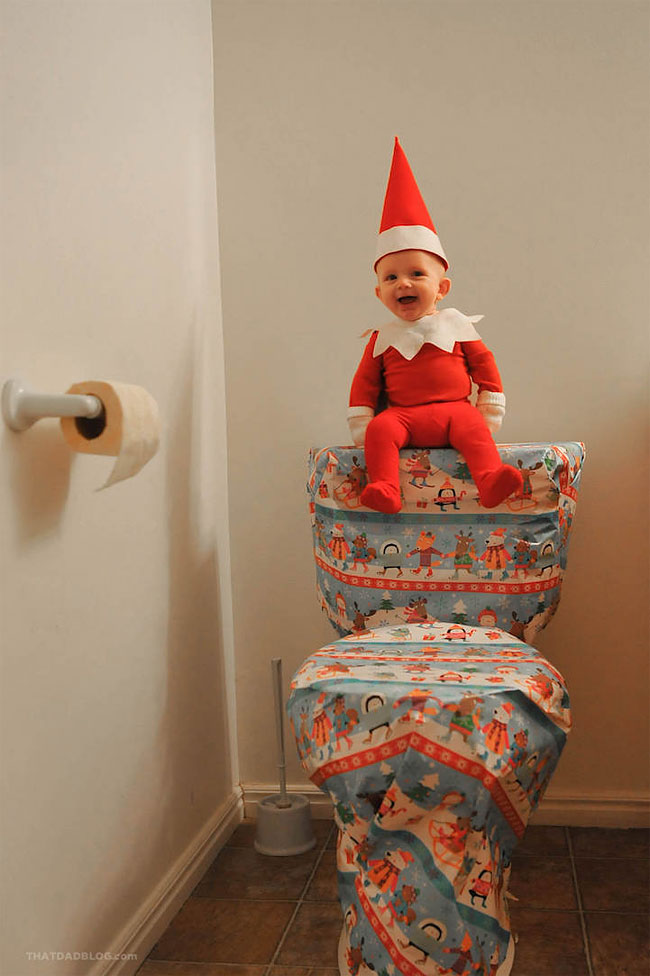 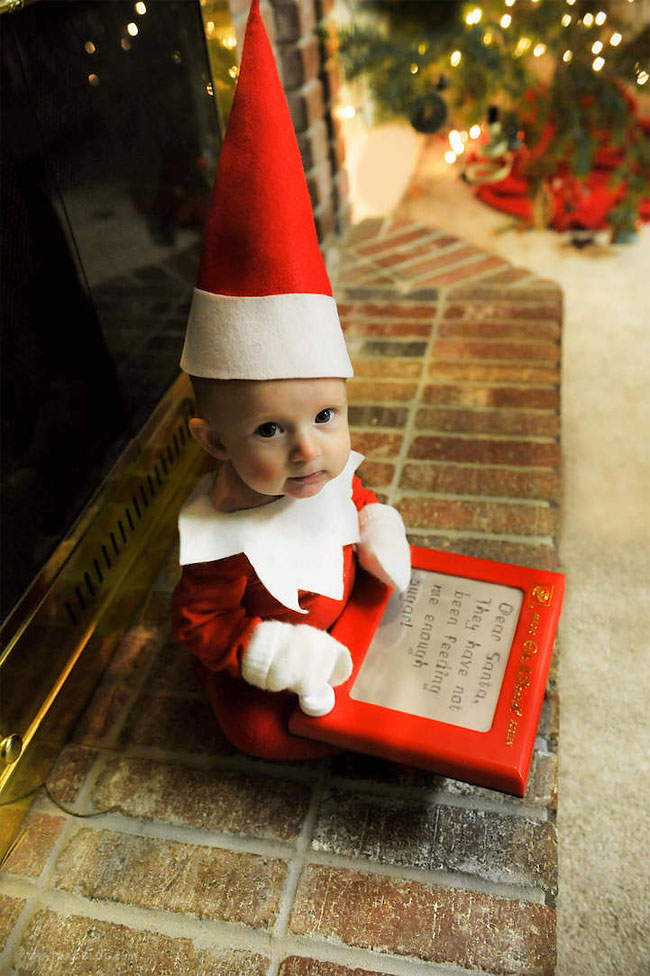 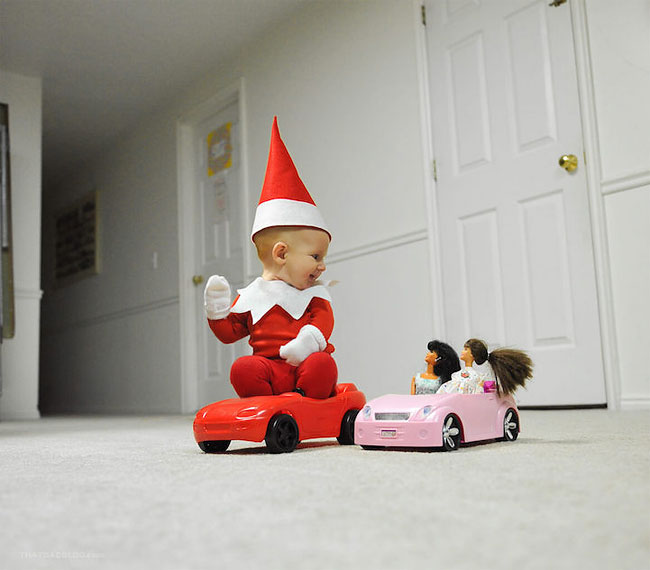 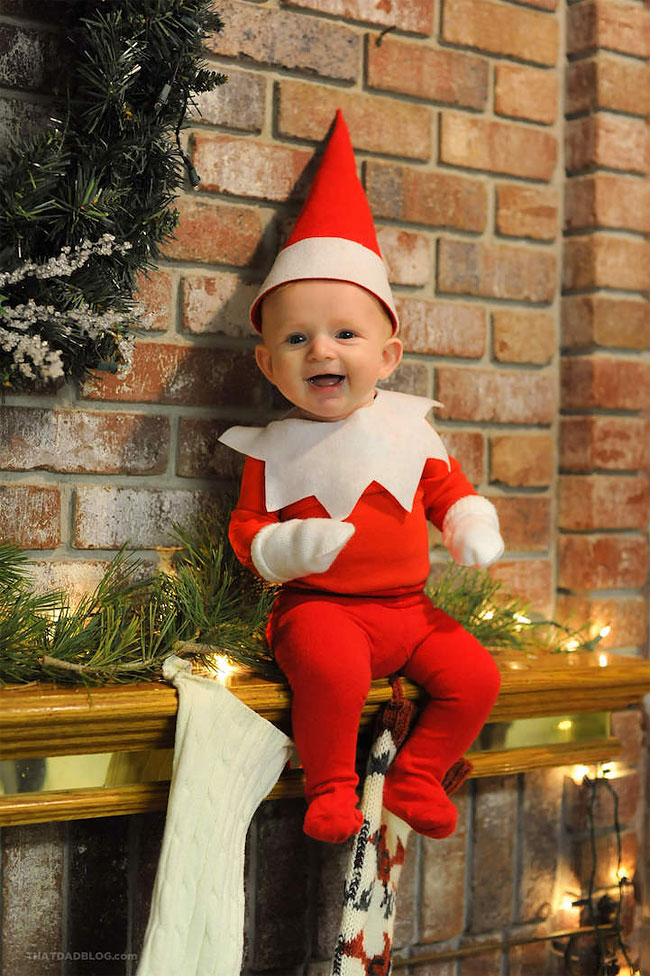 Believe It Or Not, These People Submitted Their Actual Photos For Consideration As A TV Weather Forecaster In The 1980s
Introducing The World’s First Bee Influencer
Rare Weird And Funny Pictures Show Hilarious Side Of Victorian Era Life
Futuristic Photographs Of The Block Tower In Hong Kong By Toby Harriman
Black And White Portrait Photos Of Celebrities Taken By Norman Seeff In The 1970s And 1980s
Photographer Łukasz Zagraba Captured Amazing Old Car Cemetery In Poland
Kids at Home and at Play by Tim MacPherson
This Is Known To Be The Only Photo Of Van Gogh As An Adult
19th-Century People Have No Clue What To Do With 21st-Century Technology
Strange Encounters in the Eerie Nighttime Photography of Briscoe Park
Swinging Sixties London: Groundbreaking Photography In The Capital Of Cool
Cyberpunk Neon Fantasy: Moscow’s Outskirts As You’ve Never Seen Them Before
Finalists and Winners of The Head On Portrait Award 2021
A Look into the Minds, or Rather, Desks, of Washington Art Notables
“Workwears”: We Are Not Our Jobs, A Photo Project By Bruno Fert
Japanese Photographer Perfectly Captures His Grandmother’s Playful Nature In Touching Portraits
Rogues' Gallery: Hundred Year Old Rare Scrapbook of Criminals Up For Sale
Photographer Davide Sasso Captures Stunning Surreal And Moody Shots Inspired By Japanese Anime
Photographer Challenges Herself To Shoot In ‘Ugly’ Location, And Results Prove That It’s All About The Skill
Photographer Christopher Soukup Captures Mysterious And Cinematic Nights In California
Alex Prager's Hyperreal America In Photographs
Mysterious Double Exposure Photography By Christoffer Relander
Genevieve Naylor's Post-World War II Fashion Photos In Stunning Colors, 1945-1959
Cool Snaps That Show Bedroom Walls In The 1980s
September 23-24: These Days in Photos from the Past
Istanbul Photo Awards 2021 Winners
Things with Faces
Before The Great Clean-Up Began, Here Is Another Side Of New York In The 1970s That You May Never Know
Photographer Explores The Artefacts of Abandoned Former USSR Sites
Red Smoke Blankets the Salem Area in Oregon, Casting an Apocalyptic Glow
adorable, month, shelf, transforms