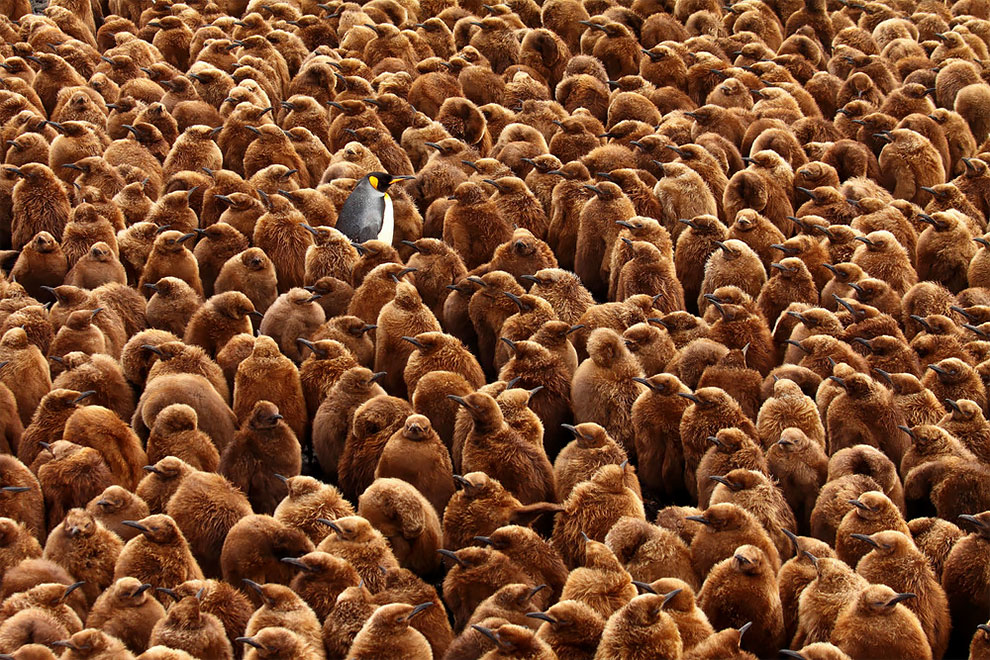 Overall winner. Stand Out From the Crowd, photographed on Marion Island (Prince Edward Islands). An adult king penguin is surrounded by chicks at a large breeding colony. Populations of the species inhabiting Subantarctic islands face an uncertain future, as climate change threatens to shift oceanic fronts where the animals feed, pushing them further away from breeding sites. (Photo by Chris Oosthuizen/University of Pretoria/British Ecological Society) 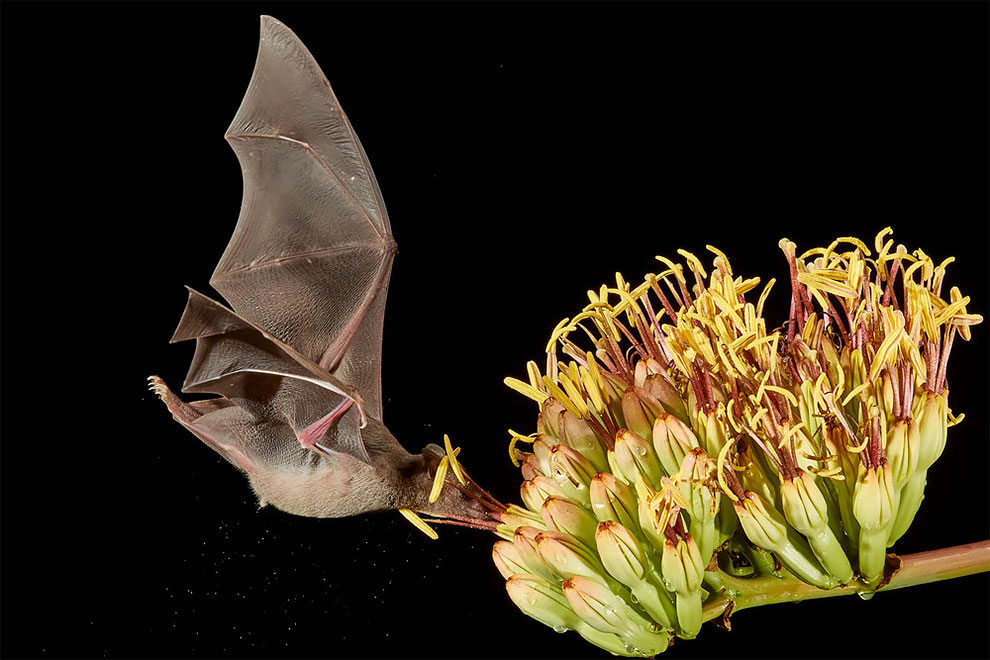 Overall runners-up. Pollination! Photographed in Arizona, US. Bats act as disease reservoirs for emerging infections. However, studies in Australia show they transmit the Hendra virus to horses and people only when they are starving. Pennsylvania State University has evidence that this is caused by deforestation so it has started rewilding of native trees. (Photo by Peter J. Hudson/Penn State University/British Ecological Society) 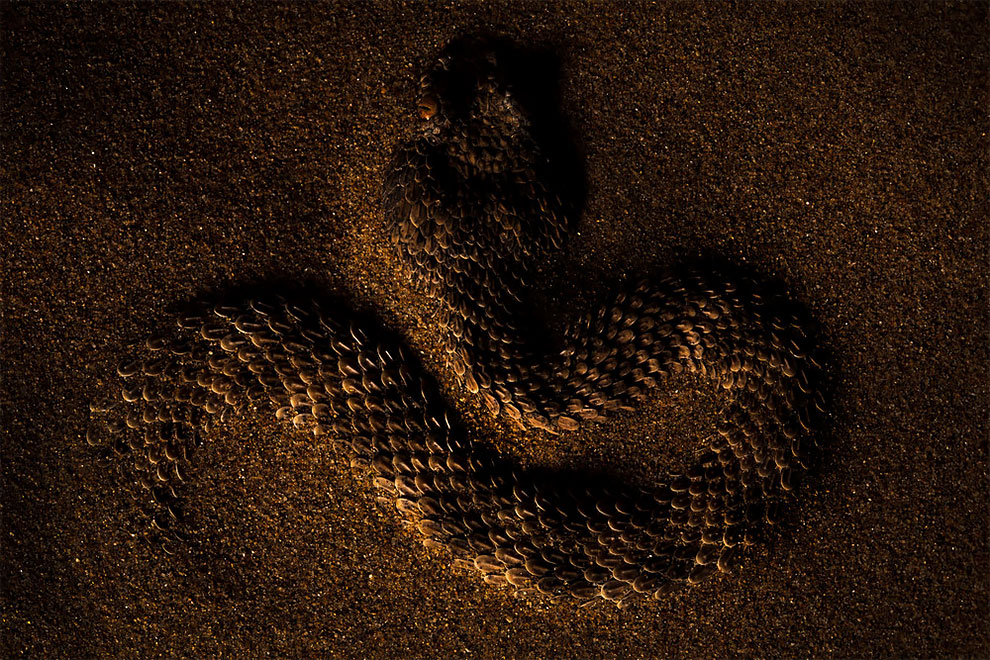 Overall runners-up. Living Fossil, photographed in Morocco. Cerastes vipera is one of several snake species that lives buried in the sand to adapt to a warm climate. Each of its scales is shaped like a small spoon that help it burrow into the sand to avoid predators – and wait for prey. (Photo by Roberto García-Roa/University of Valencia/British Ecological Society) Overall student winner. Shadows in the Sky, photographed in Manaus, Brazil. The neotropical fringe-lipped bat is a medium-sized mammal found in dry and moist forests from Mexico to Brazil. The species is easily identified by its prominent papilla-like projections on its lips and muzzle. It is one of the few neotropical bats known to capture and prey on vertebrate species. Fringe-lipped bats are known mostly for their frog-eating habits. However, their diet is still poorly understood in the Amazon. (Photo by Adrià López Baucells/University of Lisbon/British Ecological Society) 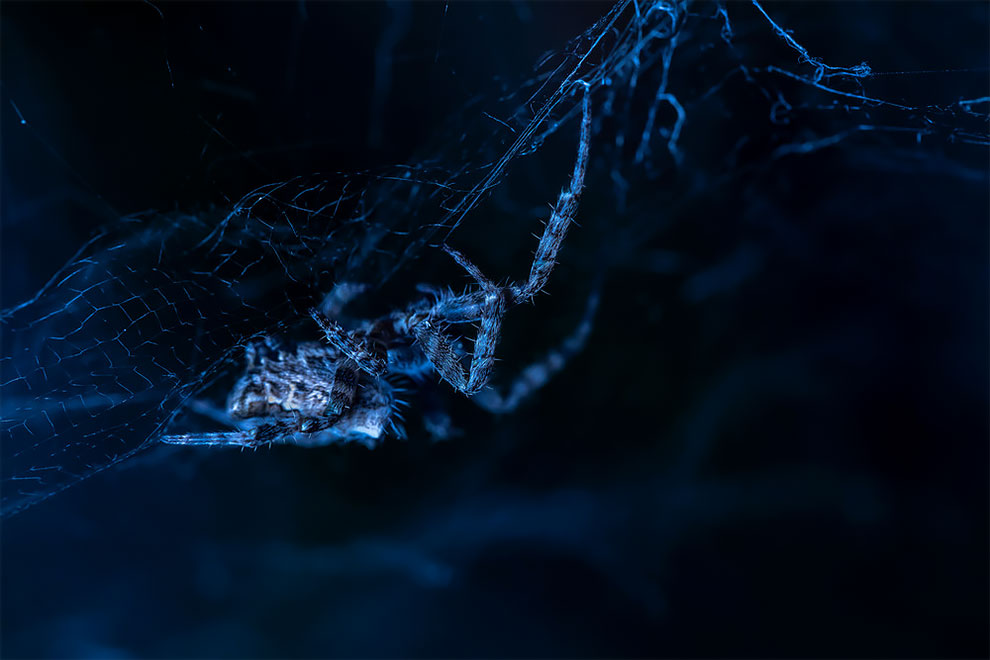 Up close and personal winner. Web of Life, photographed in Spain. It is only by going really close to a spider – in this case using macrophotography – that you realise the much-maligned species is also vulnerable. Their webs are their havens, where they eat, mate and receive protection from potential predators. These much-maligned creatures build an entire web of life in their small, dark worlds. (Photo by Roberto García-Roa/University of Valencia/British Ecological Society) 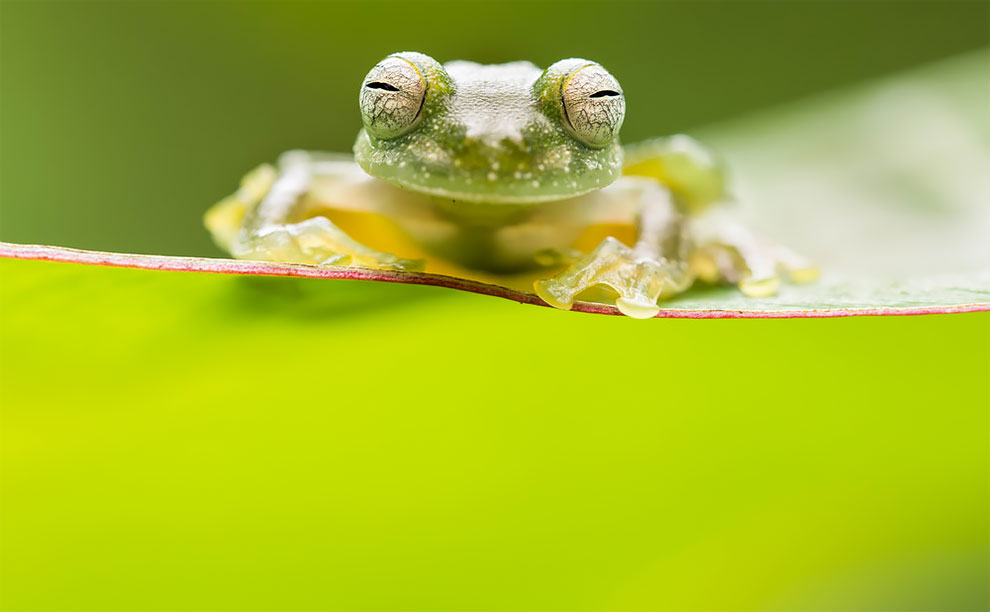 Up close and personal student winner. Look into my Eyes, photographed in Costa Rica. While studying herpetofauna, the photographer came across this fantastic little powdered glass frog perched on a leaf in the rainforest. (Photo by Alex Edwards/University of Plymouth/British Ecological Society) 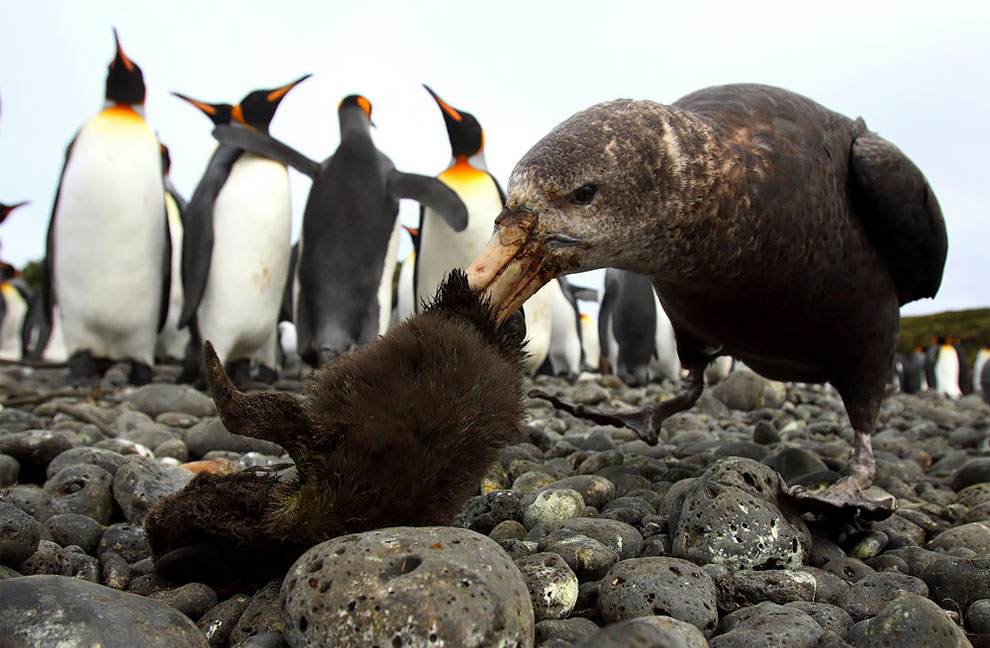 Dynamic ecosystems winner. Stinkpot Special: Penguin à la King, photographed on Marion Island. A southern giant petrel, also known as a stinker or stinkpot, preys on a young king penguin chick while adult king penguins look on. Despite their reliance on carrion, southern giant petrels are apt terrestrial predators, and predatory interactions between them and penguins are common. (Photo by Chris Oosthuizen/University of Pretoria/British Ecological Society) 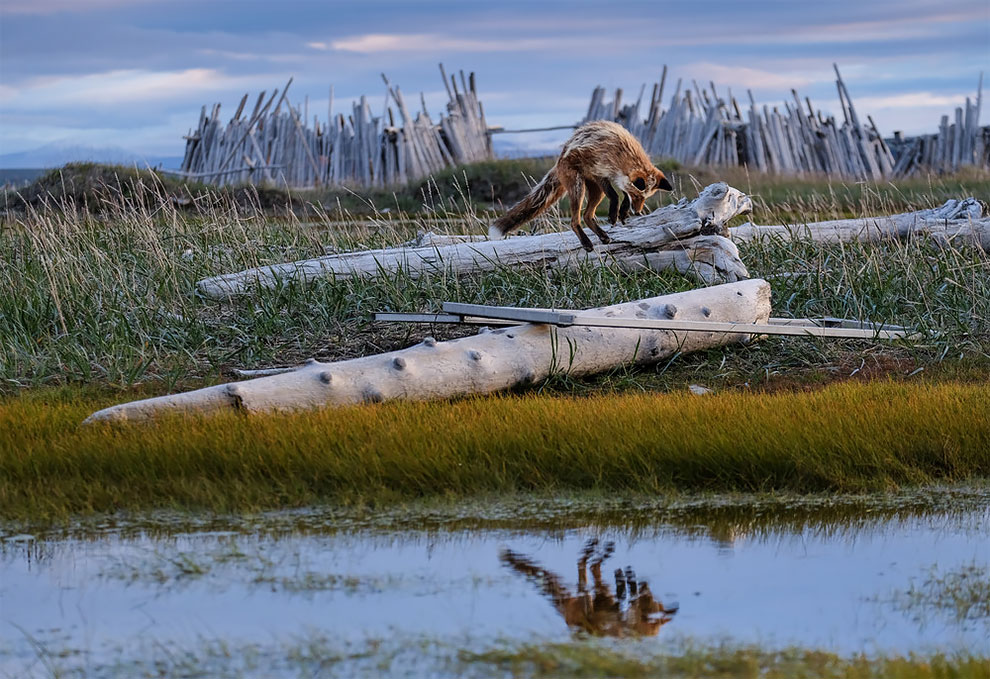 Dynamic ecosystems student winner. Fox on the Hunt, photographed in Canada. This image shows a red fox searching for tundra voles and lemmings in the Canadian Arctic. Foxes can sense their prey scurrying in the grass or snow. The photographer watched this particular fox over several days and discovered that most of its hunts were successful. (Photo by British Ecological Society) 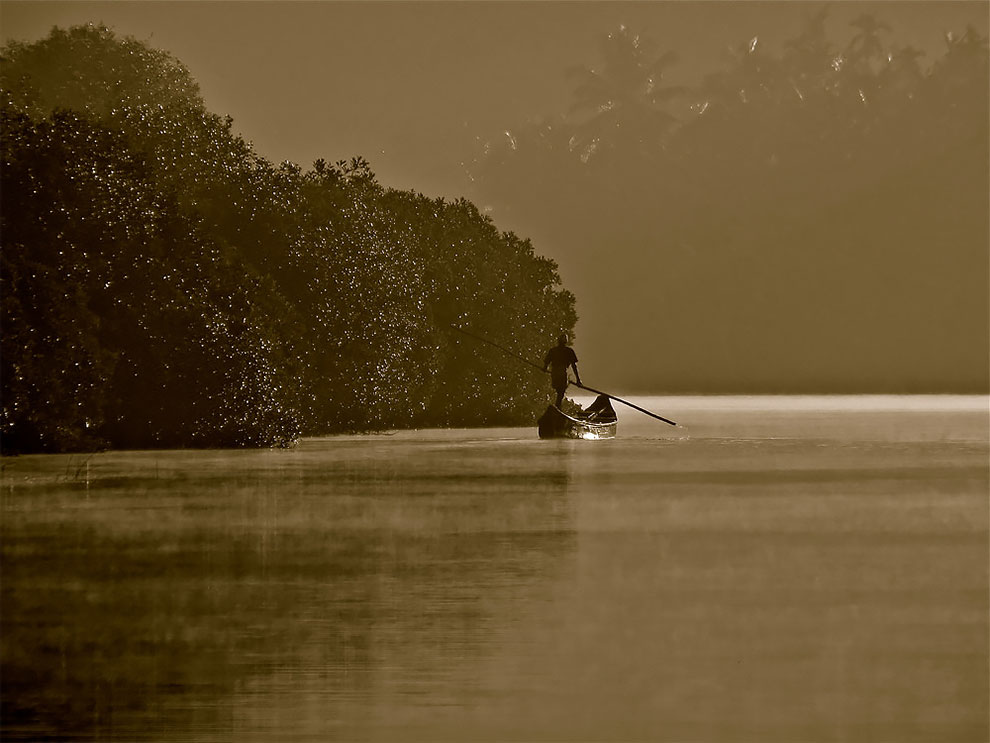 People and nature winner. Man in Mangrove, photographed in Kerala, India. The value of mangrove ecosystems to local communities, and particularly to traditional fishermen, around the world is well recognised. This picture was taken during the early hours of the morning. (Photo by Nibedita Mukherjee/University of Exeter/British Ecological Society) 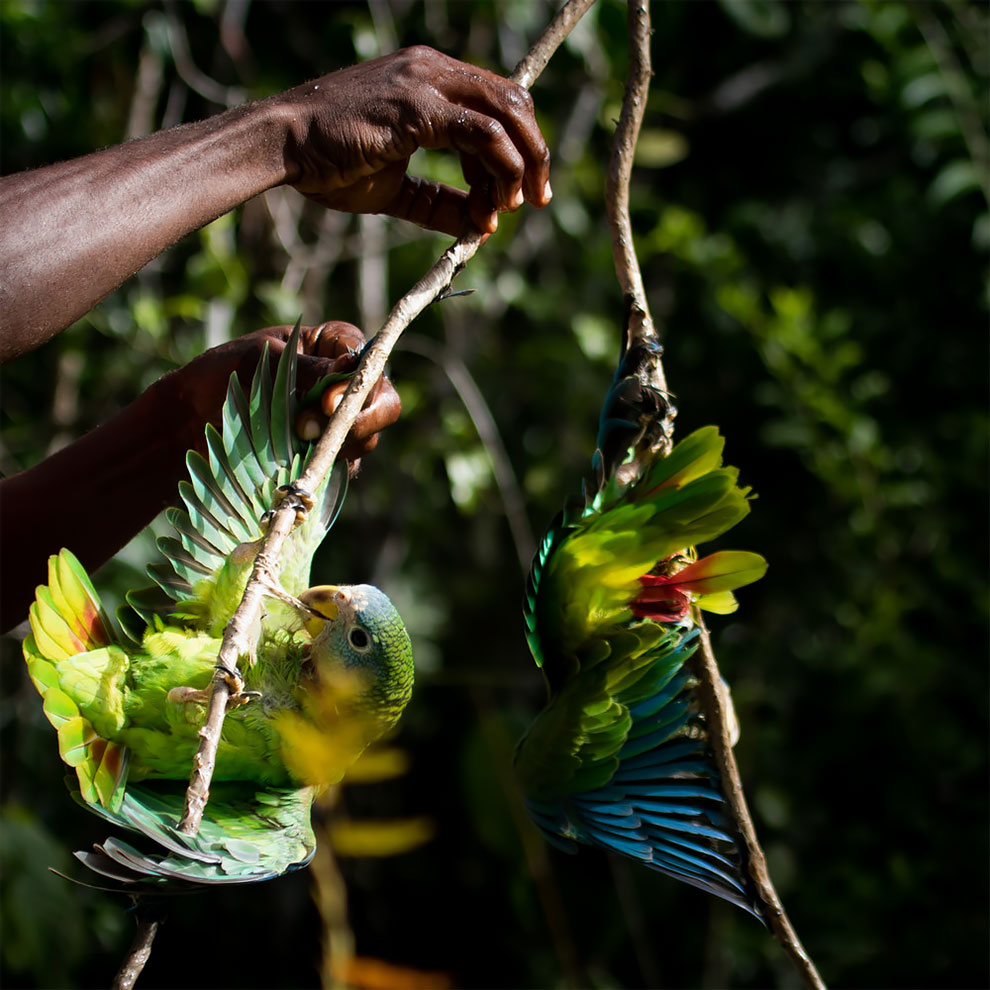 People and nature student winner. Birds of a Feather. Greater Antilles bird hunting is part of rural Caribbean culture and a mechanism through which other associated forest lore and tradition – such as wayfinding and plant knowledge that can improve conservation science – are maintained. This photograph, taken in a newly designated protected area, captures the complex biological and cultural considerations of hunting threatened parrots. (Photo by Lydia Gibson/University College London/British Ecological Society) 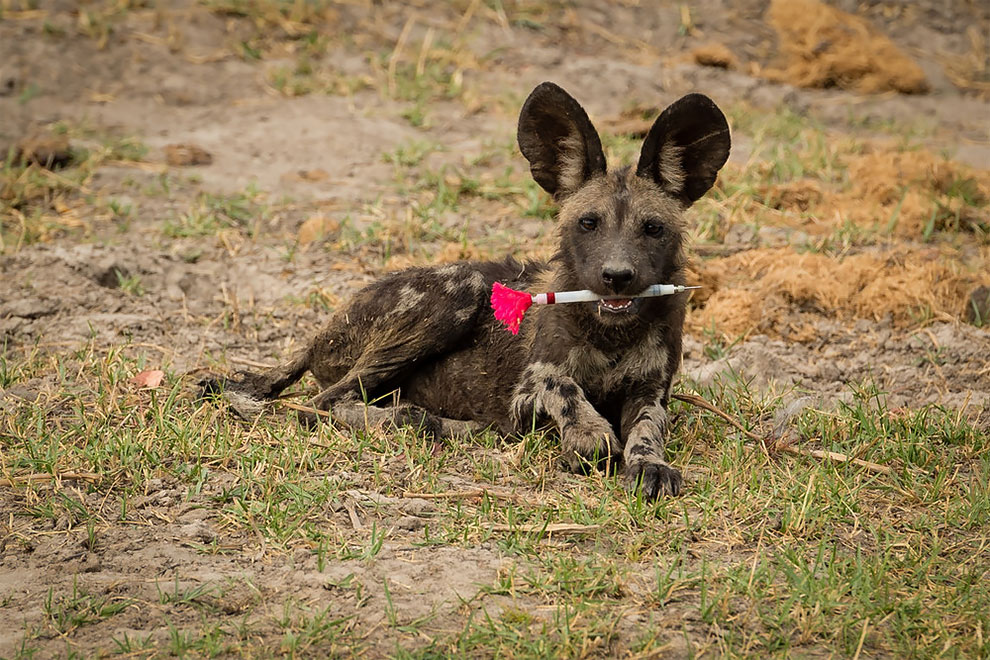 Ecology in action winner. The Tables Have Turned, photographed in the Okavango Delta, Botswana. This image shows an African wild dog pup playing with a tranquiliser dart. After ecologists anaesthetised an adult in a pack, one of the pups spotted the dart and kept hold of it, seemingly proud of its new toy. (Photo by Dominik Behr/University of Zurich and Botswana Predator Conservation Trust/British Ecological Society) 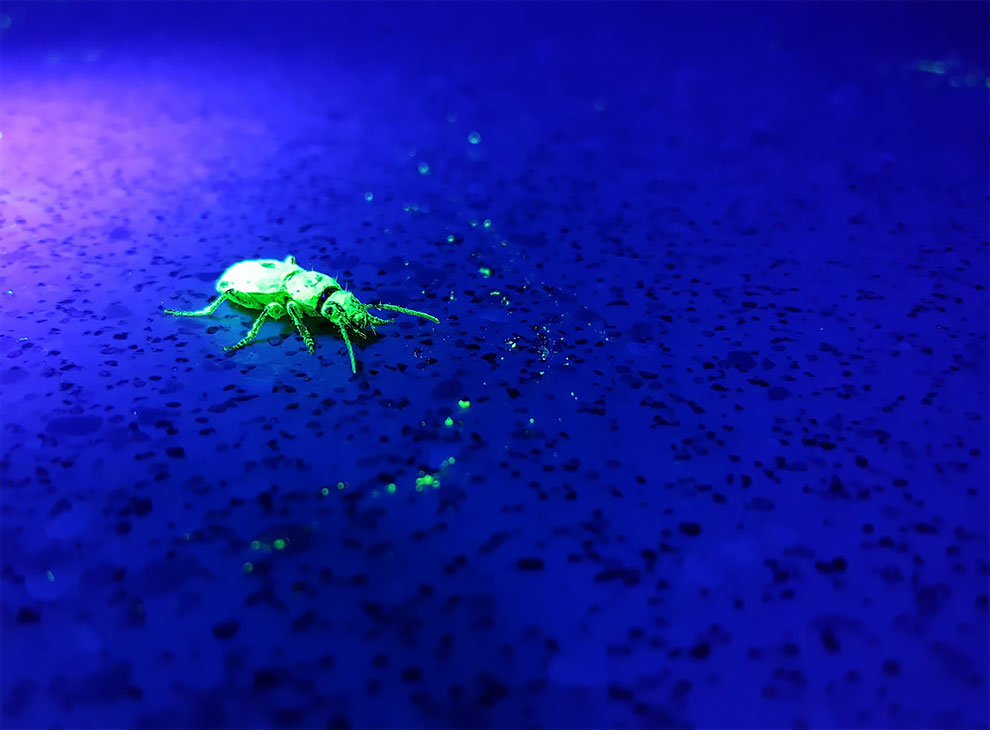 Ecology in action student winner. UV Beetle Tracking (Experiment With Ultraviolet Powder and Torches). The unique and innovative opportunity to track invertebrates using ultraviolet powder and torches was a highlight of the British Ecological Society’s 2018 summer school for this photographer. The dark environment, coupled with the vibrant colours, presented challenging yet exciting conditions in which to test her wildlife photography skills. (Photo by Ella Cooke/BSc Ecology and Conservation/British Ecological Society) 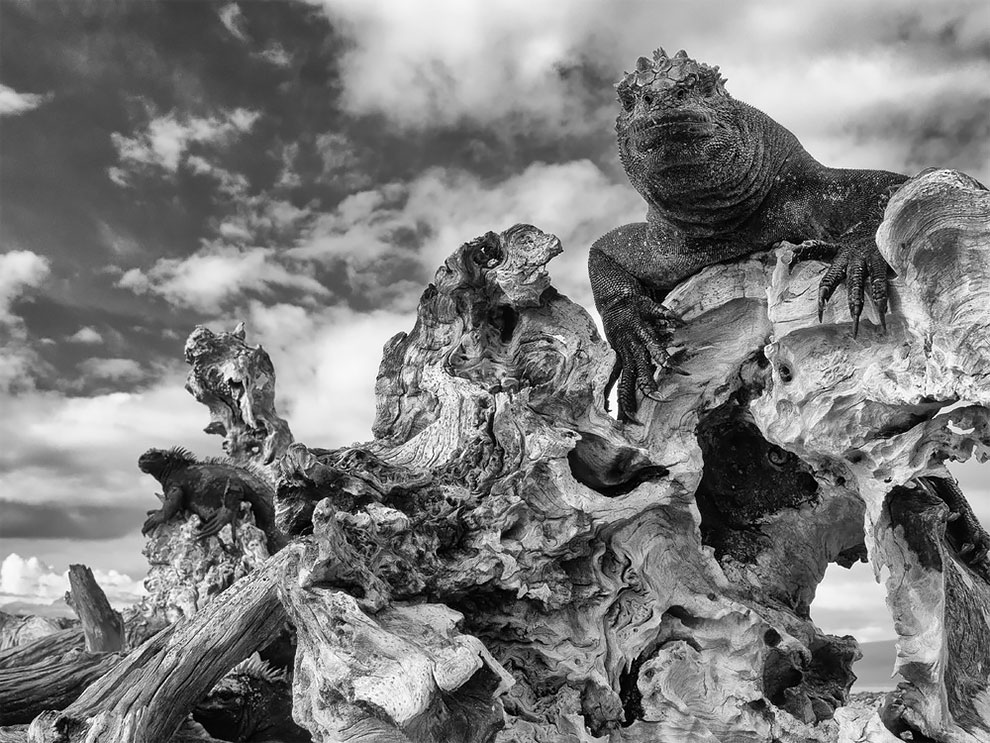 The art of ecology winner. Marine Iguanas Warm Up, photographed on the Galapágos Islands. Marine iguanas on the volcanic archipelago need to warm up each day before they can become active. These individuals had climbed on to a washed-up tree stump on Isabela Island to catch the sun’s rays. (Photo by Mark Tatchell/British Ecological Society) 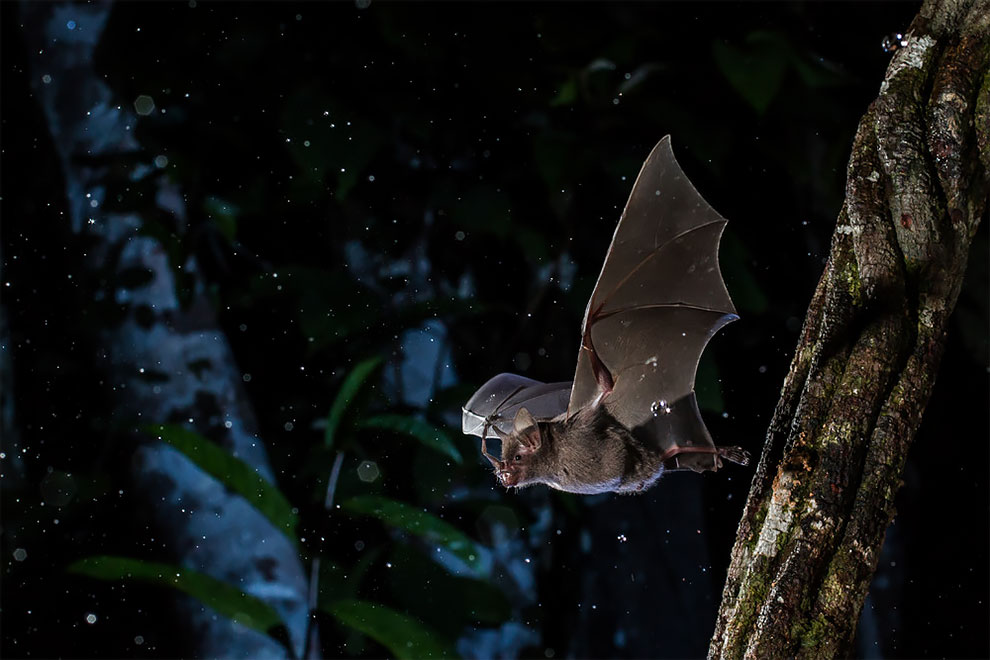 Individuals and populations winner. Flying in the Rain, photographed in Manaus, Brazil. Seba’s short-tailed bat is one of the most common species in the Amazon region and is abundant in young forests and regrowth vegetation, where it feeds on juicy fruits from pioneering plants such as Vismia or Cecropia. The Seba’s short-tailed bat is one of those common species that many people forget. However, most of the essential ecosystem services on which our survival depends, such as seed dispersal, forest regeneration and recovery, will be carried out by species such as this one. (Photo by Adrià López Baucells/University of Lisbon/British Ecological Society) 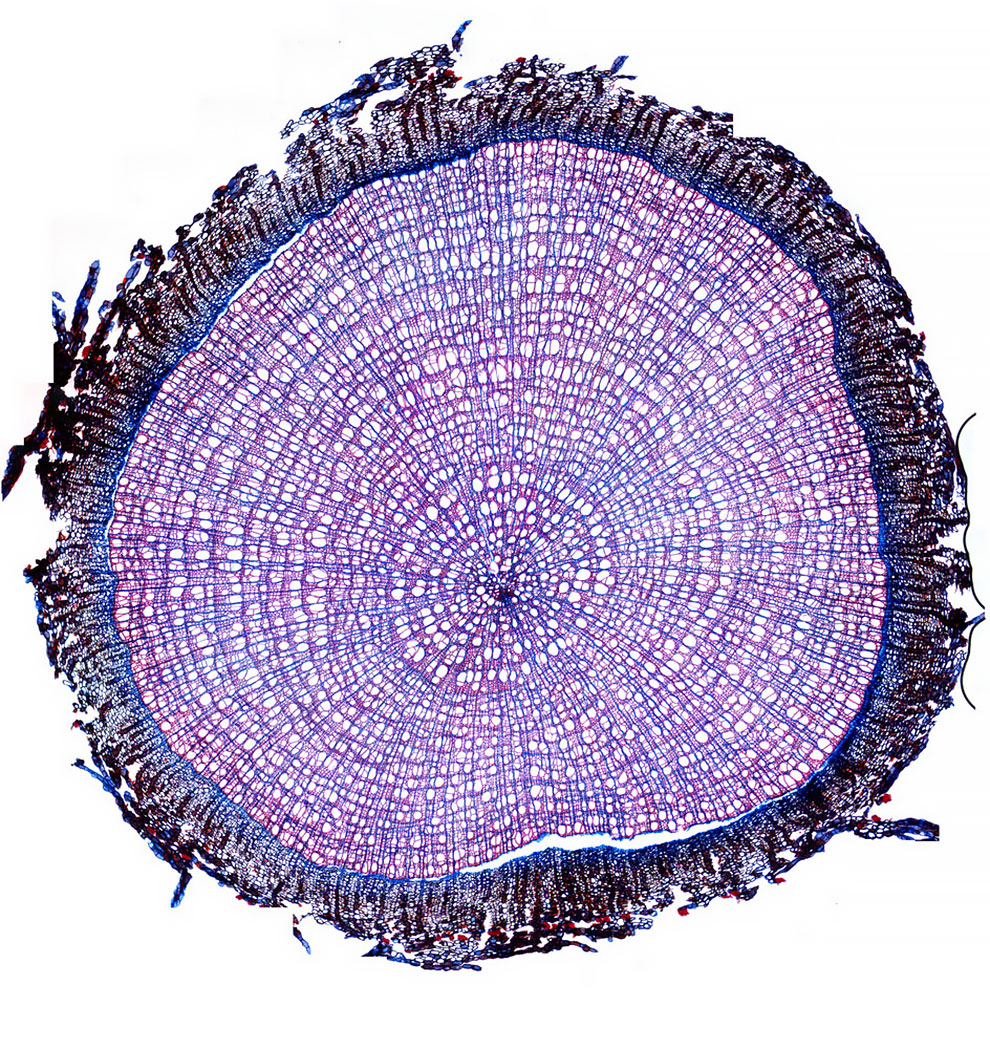 The art of ecology student winner. Can You Feel the Harsh Climate of the High Arctic? Photographed in Svalbard, Norway. Shrub ring-growth is irregular thanks to the high-arctic Svalbard climate. The story behind this photo started on a sailboat at the northern distribution margin of shrubs. Months in the laboratory generated 2mm cross-sections of Salix polaris (polar willow). Art became science, developing a ring-growth time-series retrospectively tracking vascular plants’ biomass. (Photo by Mathilde Le Moullec/Norwegian University of Science and Technology/British Ecological Society) 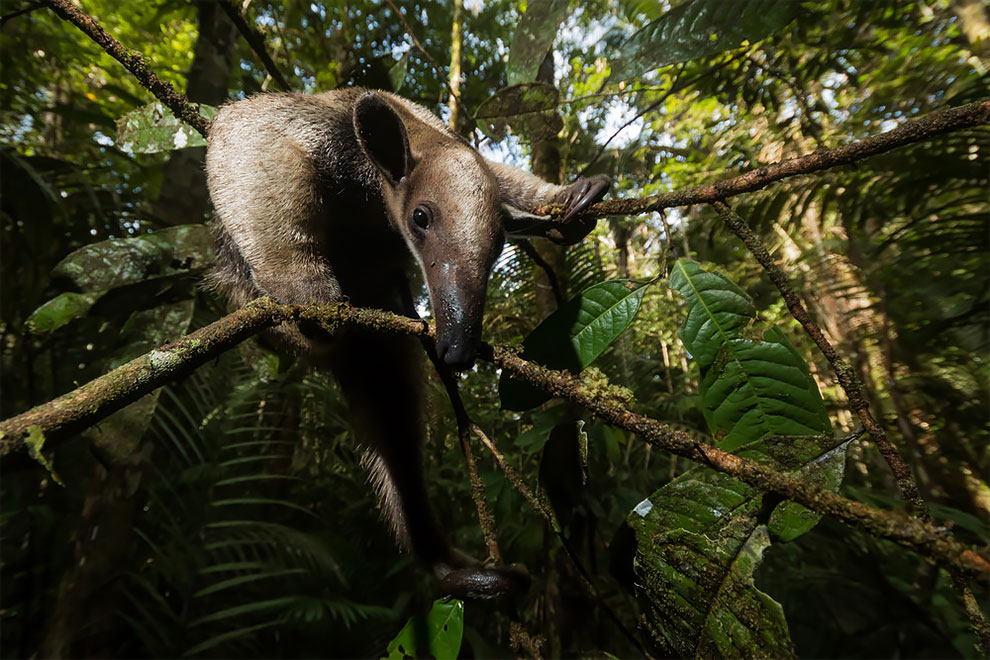 Individuals and populations student winner. Limbing in the Tropics, photographed in Manaus, Brazil. While walking in the Amazon rainforest looking for bat roosts to set up mist nets to capture bats for scientific research, a faint and almost imperceptible noise suddenly caught this photographer’s attention. An anteater was climbing with exceptional ability in a tangled mess of branches and lianas. With an unbelievable calmness, the animal watched the photographer at work and seemed to enjoy being the subject of an impromptu photography session in the most biodiverse ecosystem on Earth. (Photo by Adrià López Baucells/University of Lisbon/British Ecological Society)

2015 World's Ugliest Dog Contest
“After the Apocalypse” by Photographer Lori Nix
Beautiful Adventure Photography By Eric Bunting
This Artist Creates Detailed Glass And Ceramic Artwork Inspired By Nature
These Photos of Bullets Tearing Apart Portraits Aren’t What They Seem
Rare Photos Of Melania Trump As A Model At 16-Years-Old In Slovenia
Inside Amazon's Very Hot Warehouse
Asymmetric Nature Houses Along The Danish Archipelago By LUMO Architects
Beautiful Female Portrait Photography By Caio Borém
Photographer Spent An Entire Year Trying To Get Permission To Photograph The Empty Moscow Subway
Victoria’s Secret Angel Candice Swanepoel Sensual Photoshoot for Prabal Gurung
Lingerie Football League Media Call
"Death On The Dance Floor": Photographer Captured Stunning Photos Of Abandoned Discos Around France
Photo of the Day: On The Edge
Intimate Bird Portraits Highlight The Refined Beauty Of Our Feathered Friends
Rare And Beautiful Portrait Photography Of Marilyn Monroe From The 1950s
Candid Photographs Capture Street Styles Of San Francisco Girls In The Early 1970s
These Portraits Show How People Are Just Like Their Pets
Vintage Photos Proving That The Beauty Of People From Previous Generations Is A Unique Thing
Stunning Aerial Photos of Winter in New York City
Before Facebook: This Is How We Used to Unfriend People Back Then
Polish Photographer Ewelina Zych Proves You’re Not A Real Photographer In Slavic Country If You Don’t Have A Rural Photo-Shoot
The Finalists For The 2017 Art Of Building Photography Awards
Defense Attorney Haunts Tennessee Courtroom
animals, contest, ecology, nature, photography, winners