From footballs to live fish, delivery mopeds piled high with unwieldy, unlikely goods are one of the Vietnamese capital’s most distinctive sights. As the city plans to ban motorbikes altogether, photographer Jon Enoch captured the drivers at work. 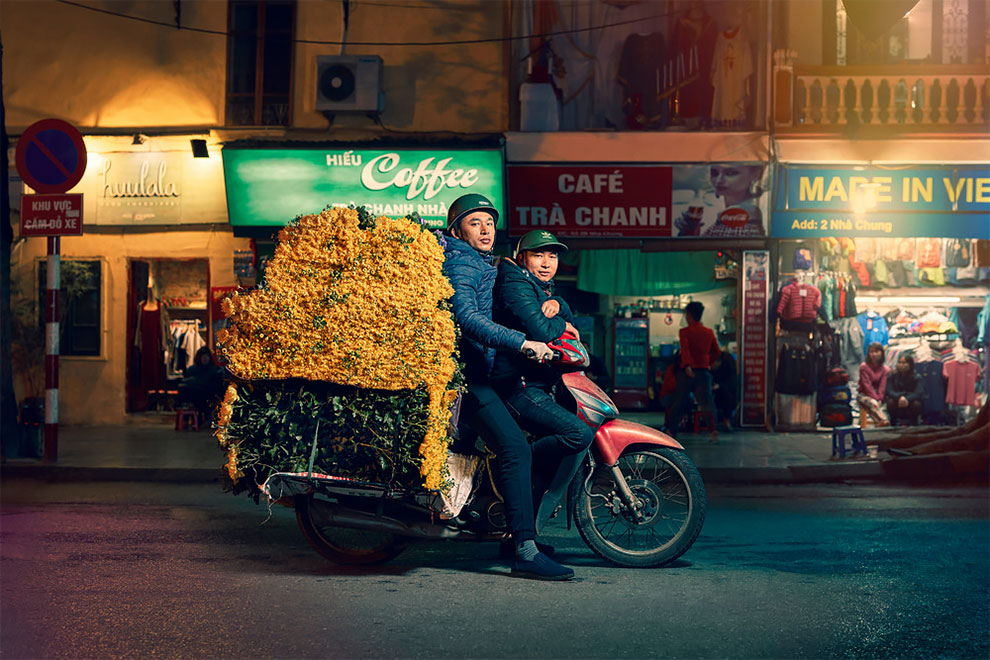 Flowers. “When I first travelled around south-east Asia 15 years ago, the motorbikes and mopeds just astounded me”, photographer Jon Enoch says. (Photo by Jon Enoch) 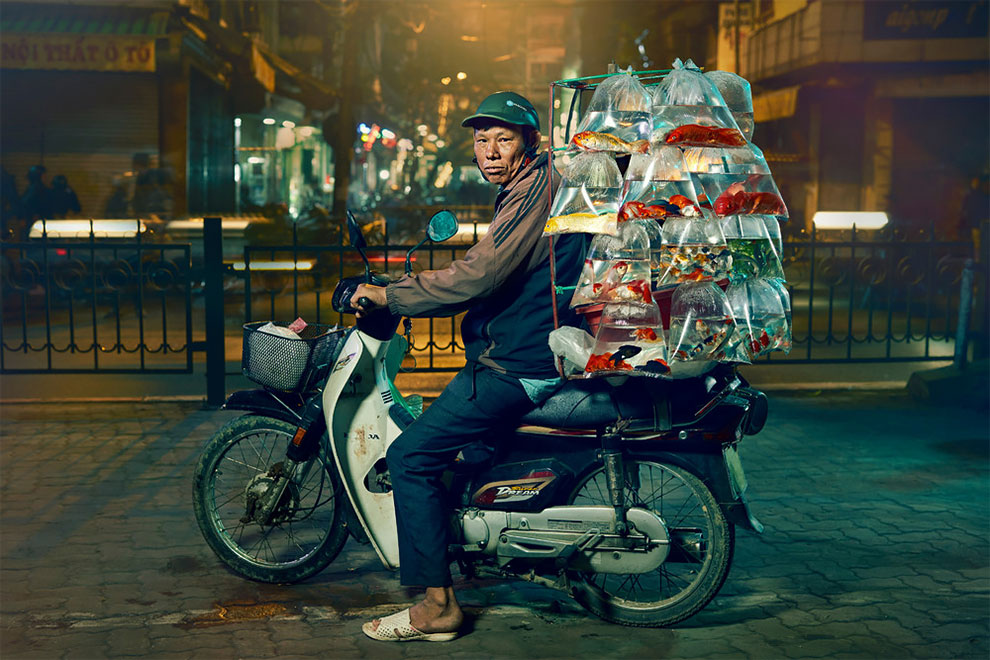 Live fish. Vietnam has the highest number of motorbikes in all of south-east Asia – Hanoi alone has 5m of them, and only half a million cars. Now the city is planning to ban them by 2030 to cut pollution. (Photo by Jon Enoch) 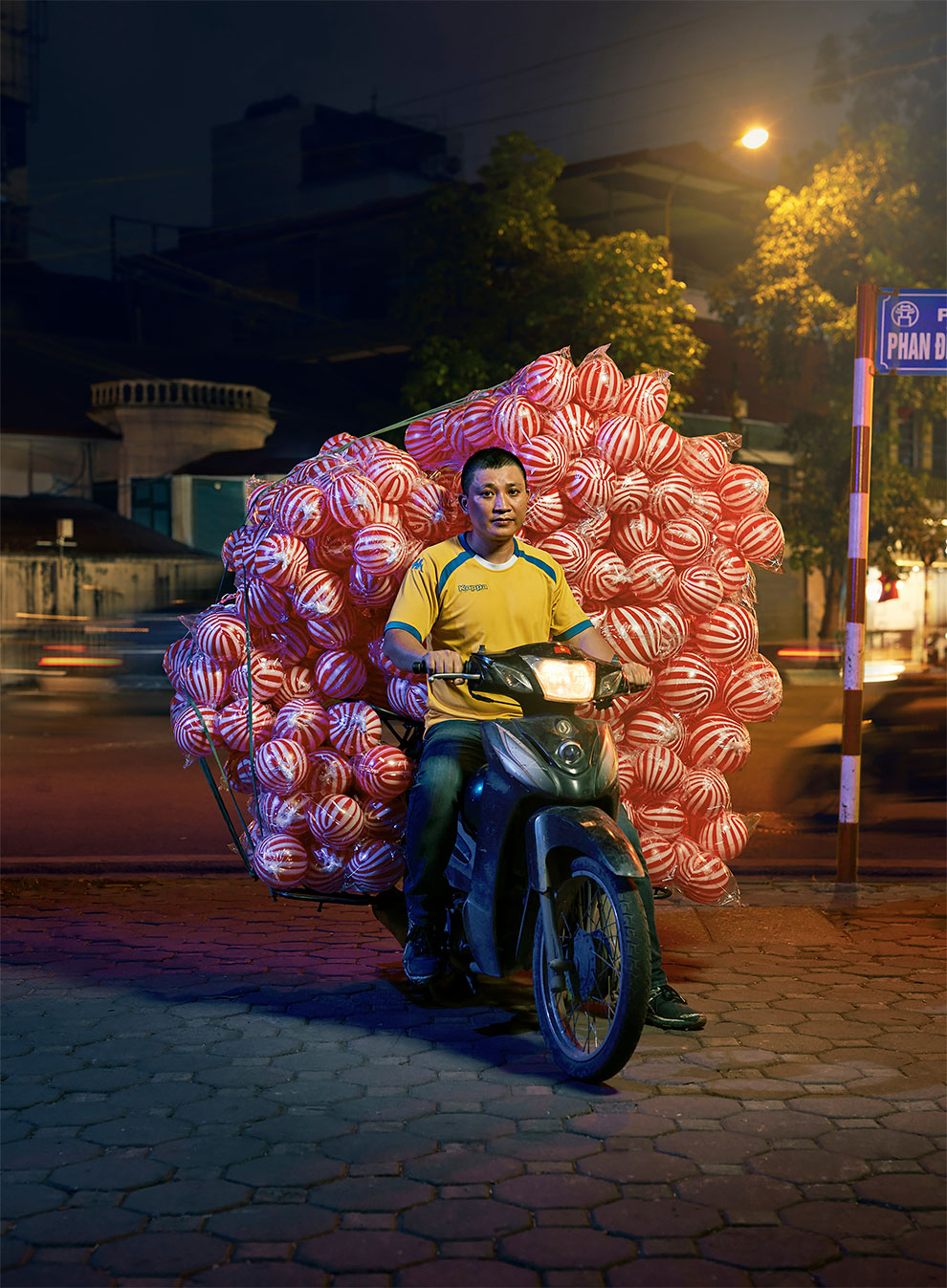 Children’s footballs. “Initially, that level of traffic that never stops is overwhelming to the senses – you wonder how you’ll ever manage to cross a road”. (Photo by Jon Enoch) 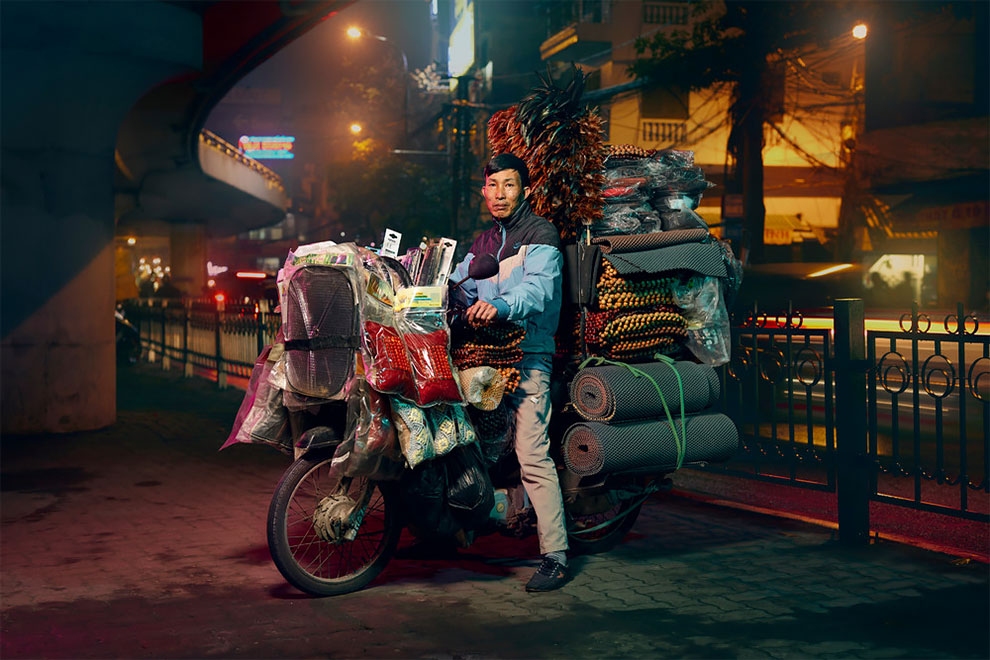 Car accessories. “After that initial shock, I began to be fascinated by the drivers and deliveries. Seeing really unusual deliveries, like a huge pile of eggs, towering bags of ice or an enormous mound of flowers, was visually so stunning I started asking people if I could take photos of them”. (Photo by Jon Enoch) 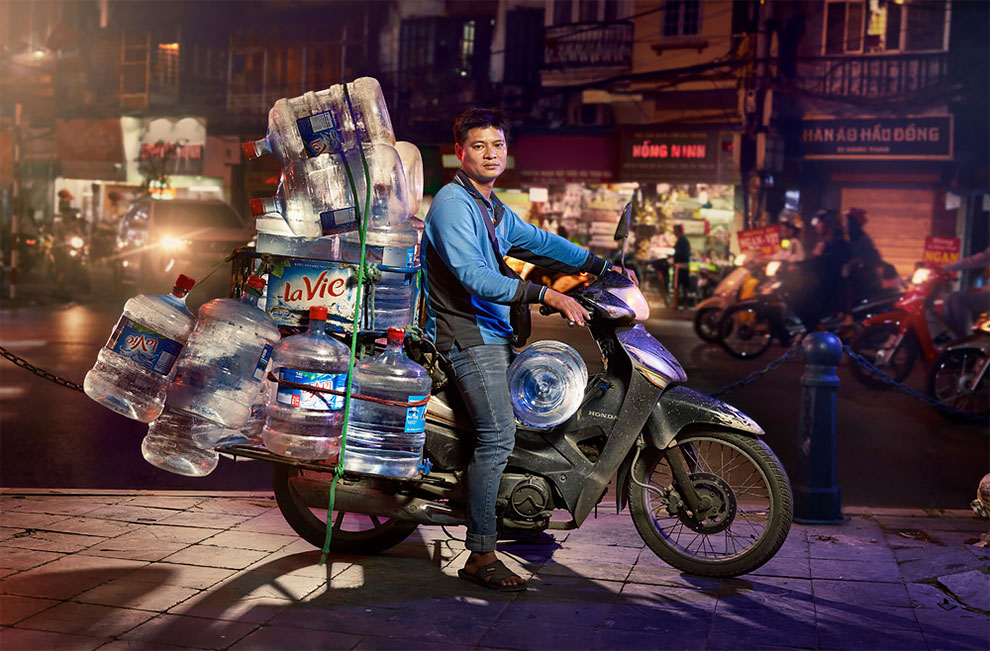 Water for office workers. “There is such a skill to loading up a motorbike to this level, and knowing what your limits are, and then on top of that, getting to your destination with a full undamaged load”. (Photo by Jon Enoch) 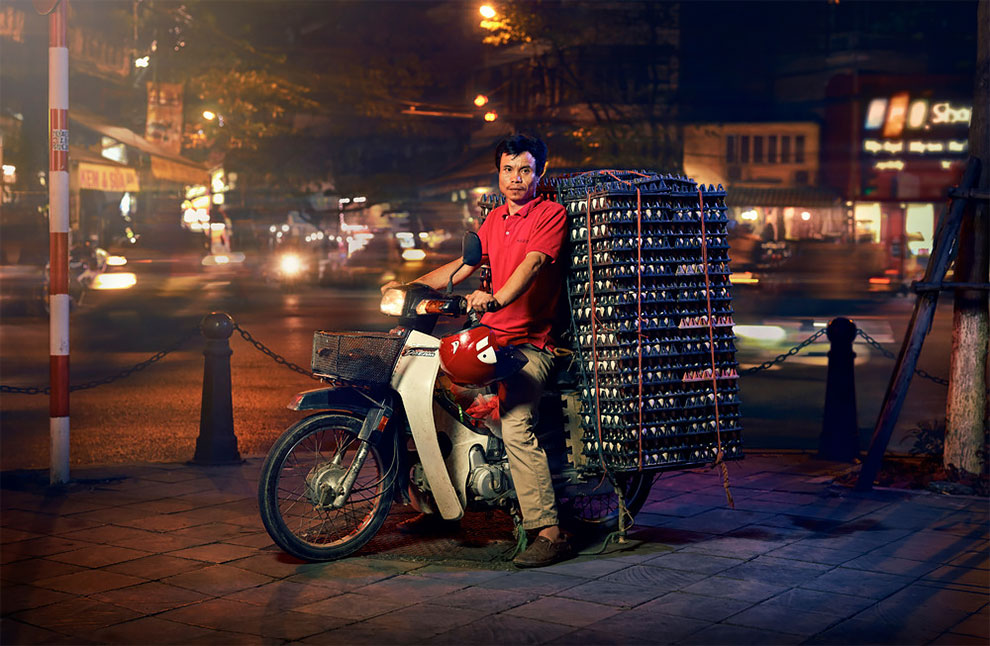 Eggs. “I had been planning this series of photographs for a really long time, so when I read that motorbikes would be banned I knew I had to fly over and finish this project as soon as possible”. (Photo by Jon Enoch) 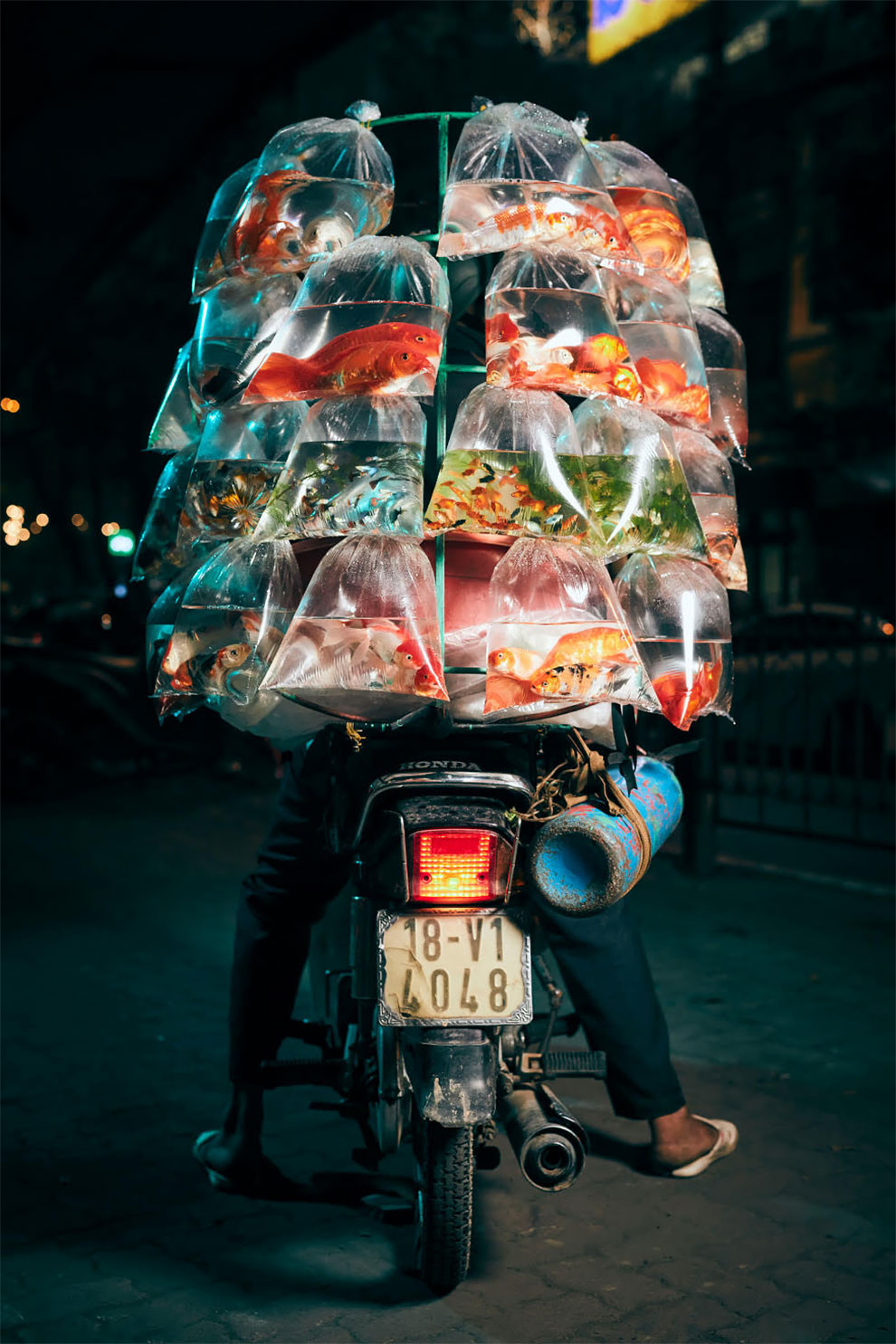 Live fish. Enoch travelled to Vietnam in February 2019, during the dry, cooler season, and worked every evening to capture atmospheric images in the glow of the city. (Photo by Jon Enoch) 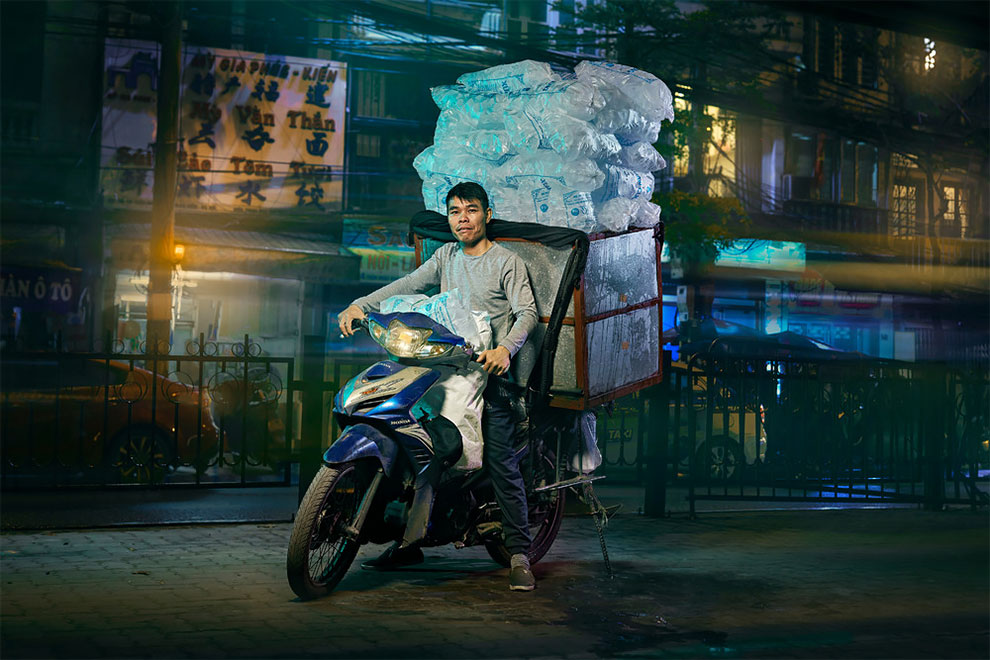 Ice. “These motorbikes allow small businesses to operate”, he says. “It’s hard to imagine what the city will look and feel like without them”. (Photo by Jon Enoch)

Fantastic Nightscapes Of Finland By Mika Suutari
KangHee Kim’s Images Are As Satisfying To Create As They Are To Look At
The Ultimate Proof That Every Daughter Turns Into Her Mother
Cool Pics That Show Fashion Styles of the ’80s Young Women
Look at All These Insane Deep-Sea Creatures Biologist Just Found In White Sea
The Secret Lives Of Star Wars Villains
UK Astronomy Photographer Of The Year 2016 Shortlist
Australian Photographer Put A Giant Mirror In A Salt Flat
The Lost Golden Age: Soviet Russia, As Seen By Photographer Vladimir Sokolaev
Amazing Vintage Photographs of Linemen on Utility Poles at the Turn of 20th Century
Photographer Captures Beauty Of Spiral Staircases In Campuses
18 Photos Which Show Life From A Different Perspective
Dreamy Photos Of Boston And Massachusetts Suburbs By Greg DuBois
Moody And Cinematic Street Photography By Alex Fernández
"New Horizon": The Post-Soviet Landscape Through The Lens Of Rafal Milach
Photographer Tom Hegen Captures Breathtaking Futuristic Photos Of Dutch Greenhouses At Night
If The Moon Were Replaced With Some Of The Planets From Our Solar System
"Colorize To Remember": Samir Belhamra Colorized Historic Images To Bring The Past To Life
Photographer Naohiro Yako Captures Colorful And Dazzling Nighttime Pictures Of Japan
Before Smartphones And Computers Kids Had Real Fun
Beautiful Flower Photography By The Polish Photographer Barbara Florczyk
Vintage Cover Photos of Czech Weekly News Pestrý Týden in 1927
Beautiful Aerial Photos Of The Blue Salt Fields, Shark Bay, Australia
Funny Family Photo By Bruce Osborn
2007 ‒ 2023 by Design You Trust. Proudly hosted by WebHostingBuzz.
Privacy Policy · Terms of Service · Content Removal Policy ❤️ 🇺🇦