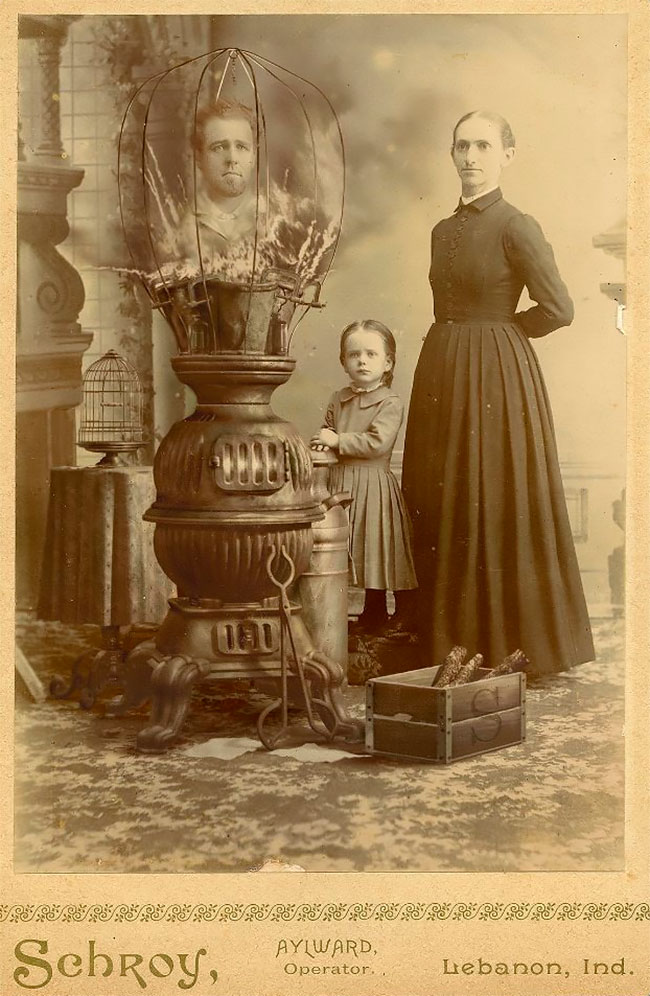 A handmade work from the Salt Lake City based artist and professor, Edward Bateman, this collection follows up on his earlier carte de visite collection ‘Mechanical Brides of the Uncanny’ and shows his evolving use of constructed and often anachronistic imagery to create allegedly historical artifacts that create metaphors for the camera and examine our belief in the photograph as impartial witness. 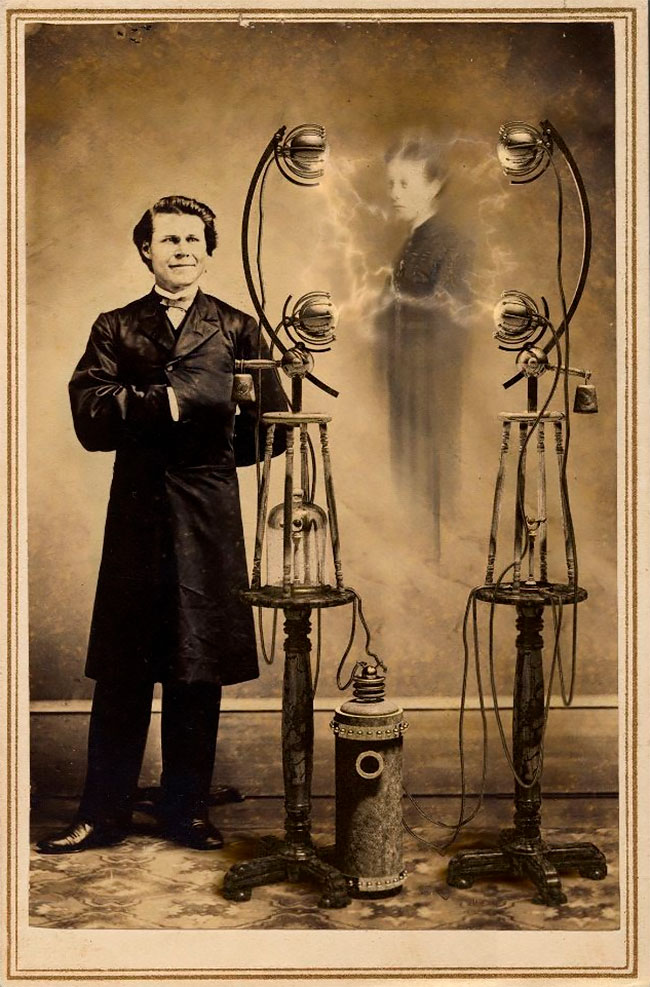 At nearly the same time that photography was invented, Spiritualism was being born in the “burned-over district” of New York. Central to is belief was the practice of communication with discarnate human spirits. These two developments would intertwine in 1861 when William Howard Mumler produced the first spirit photograph. 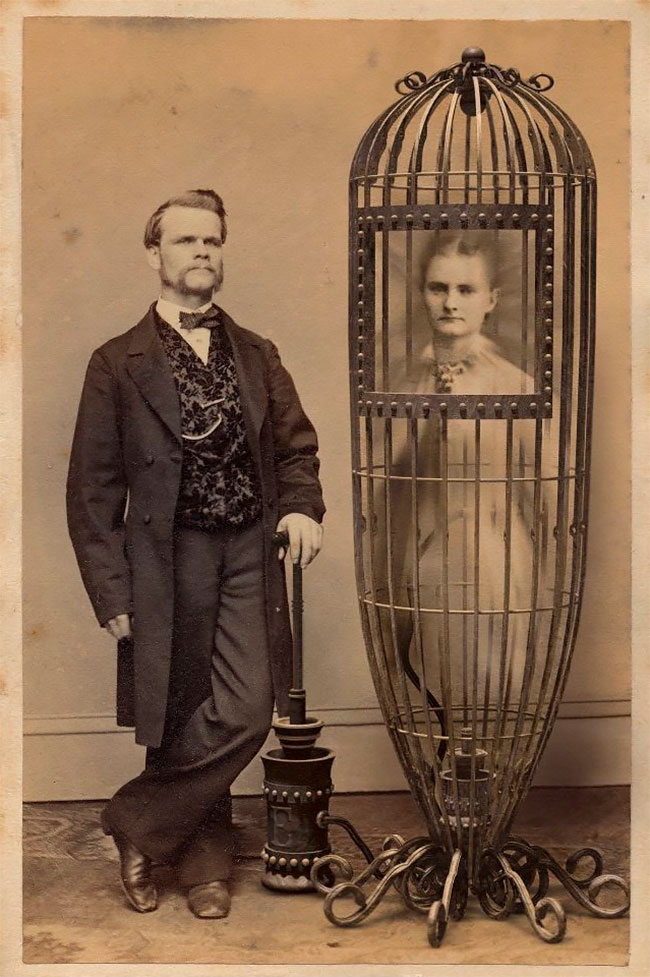 Photography has always been used as a form of objective truth. Following the carnage of the American Civil War, people looked to spirit photographs as proof of the continued existence of their loved ones. This practice involved a human “medium” who would make contact with the dead, which could then be recorded on a photographic plate. 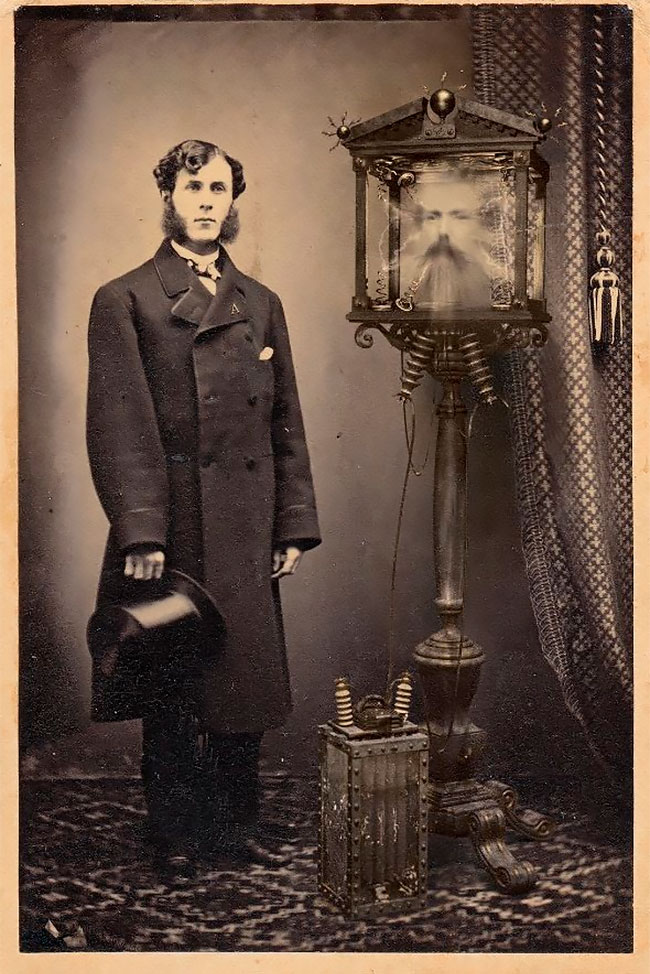 The process rapidly spread across the U.S. and to the U.K., but was unreliable and prone to fraud. Trials were held protesting the activities of these spirits photographers with many respected witnesses supporting claims on both sides of the issue. Mumler himself, who photographed Mary Todd Lincoln with the ghost of the slain president, was brought to trial with none than P.T. Barnum testifying against him. He was acquitted, but ceased to practice and died in poverty. 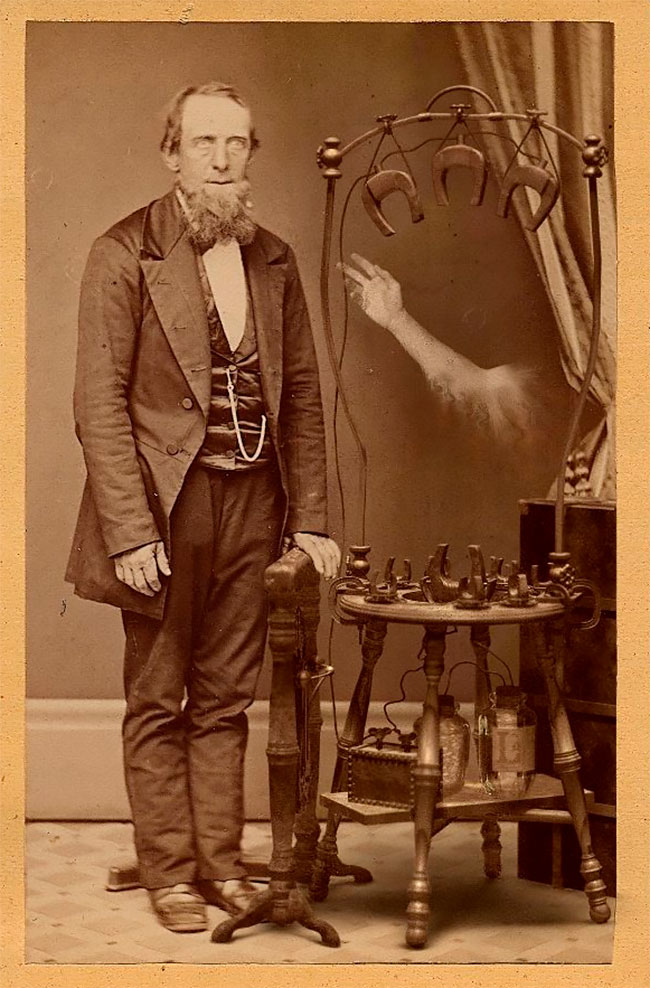 At the same time, others sought new technologies which, like the camera, could extend human senses and without human intervention conclusively reveal the existence of life beyond the grave. Images in this collection show the use of magnetism, electricity, photography, chemical substances and steam. 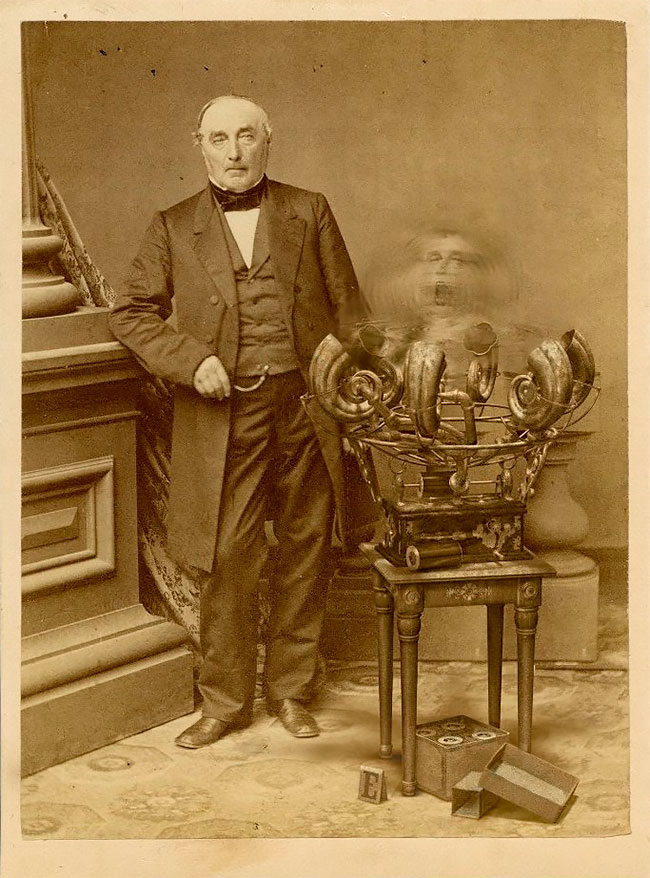 Documents dating from this time describe exotic (and possibly fictional) materials such as magnetic mercury, etheric vapors and resins, and ectoplasmic soils. The annihilation of space and time had seemingly been achieved by science and it is little wonder that its eye would be turned on the greatest of life’s mysteries. 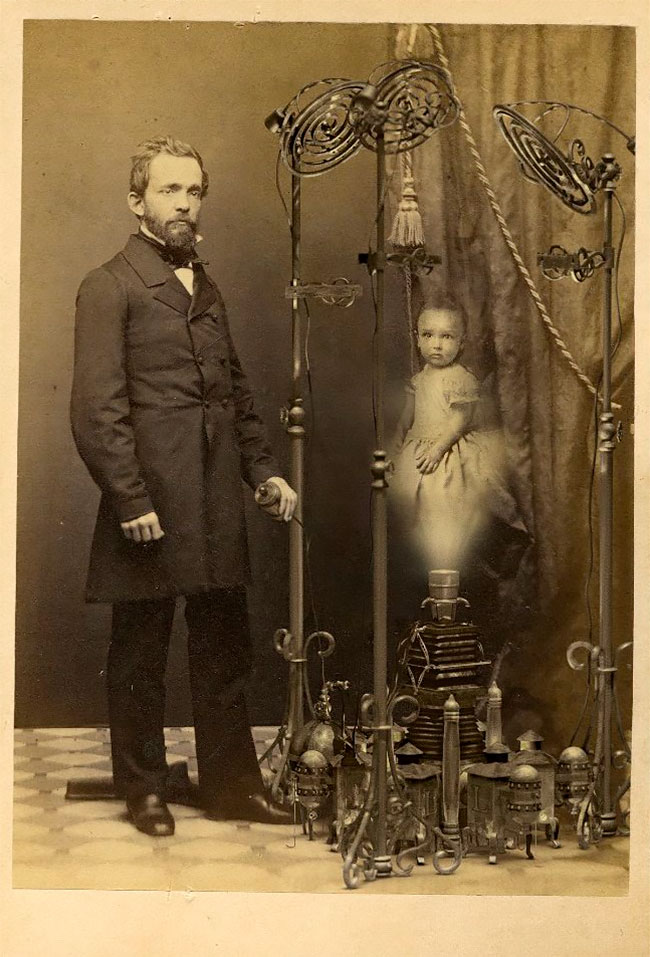 The images presented here document some of these inventors and their creations used to manifest discarnate spirits. We may doubt the truthfulness of their claims, but one thing is certain: the camera does indeed let us see the dead again, not as ghostly manifestations, but as meaningful and precious documents of those once lived. 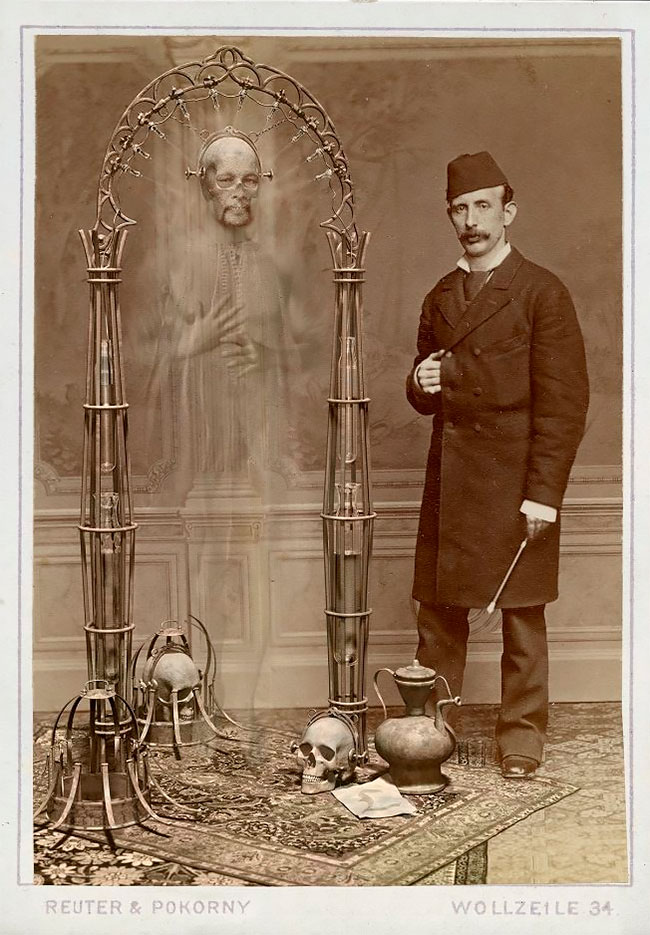 From the artist’s statement: “Every object exists in two worlds. One is the tangible that we know through our senses and another that exists only in our minds. It is in this mental realm where objects take on the properties of metaphor and meaning. These are seldom fixed but exist in a fluid dance where associations are changed as easily as masks at a costume ball. In my work, I play with these complex associations to create rich metaphorical structures. Like the frontispieces of old books, I try to speak volumes through a single image.” 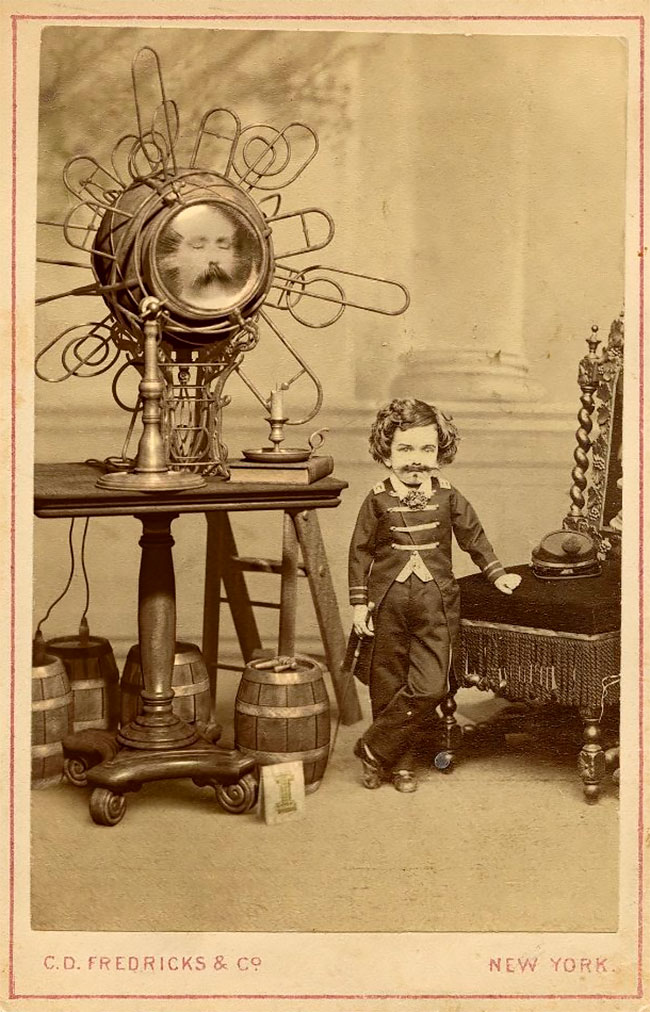 “Although some elements in my work depict ‘real’ things, many objects have never had a tangible physical existence. These elements are modeled completely inside the world of a computer. They are ghosts made of nothing more substantial than numbers; yet they seemingly share space with objects that have both physicality and history. My method of working mimics light itself, one beam at a time, in a process that can take from hours to days to complete and involves literally trillions of calculations.” 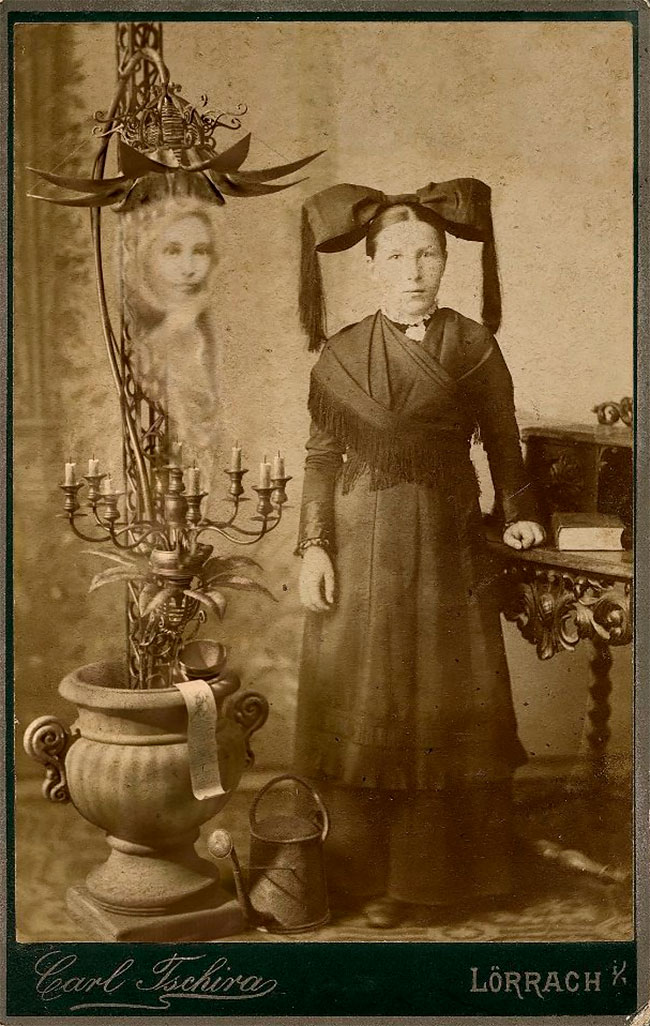 “Lenses and mirrors are common in my work. I have removed the lens from the image-making process and placed it within the image itself. Like any depiction, lenses represent a point of view and a narrow focus. What they reveal often overpowers what is excluded by their gaze. Mirrors are a metaphor for art itself as well as the process of self-knowledge and discovery. They are also part of the tricks of mind and eye: smoke and mirrors. The camera was the first machine of depiction, and for a time we believed it to tell only the truth. In the end, perhaps all the images we create share a strange mixture of magic, truth, and illusion. And in this soil sprouts metaphor, which is the source of meaning.” 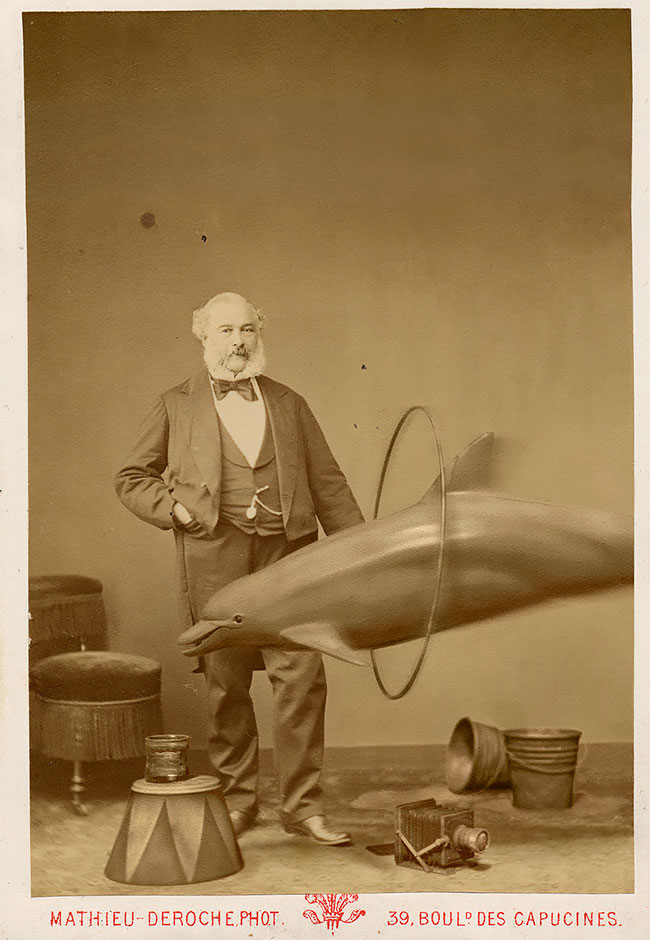 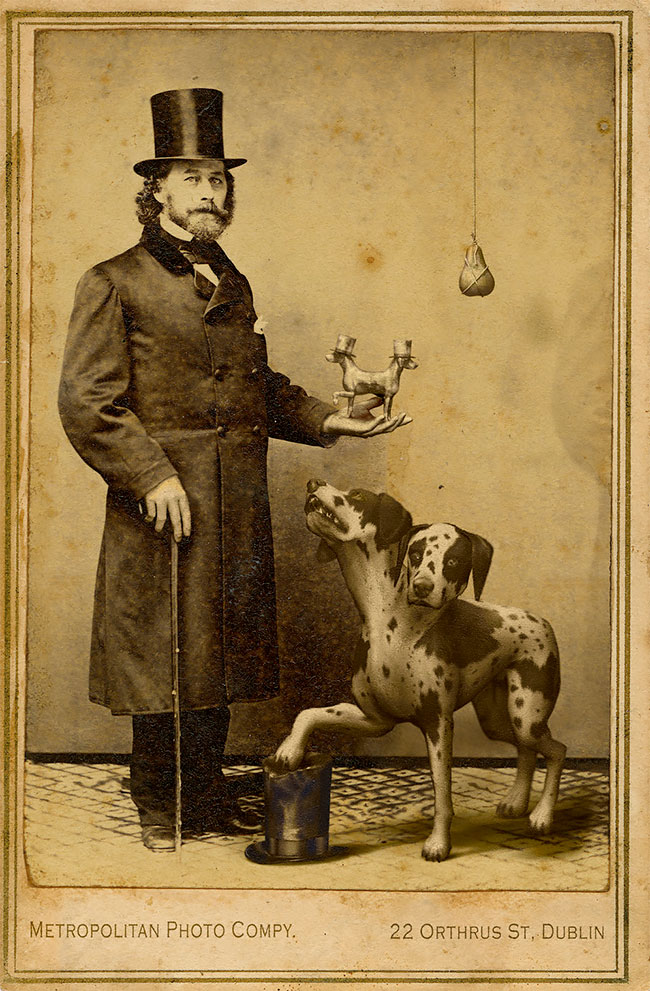 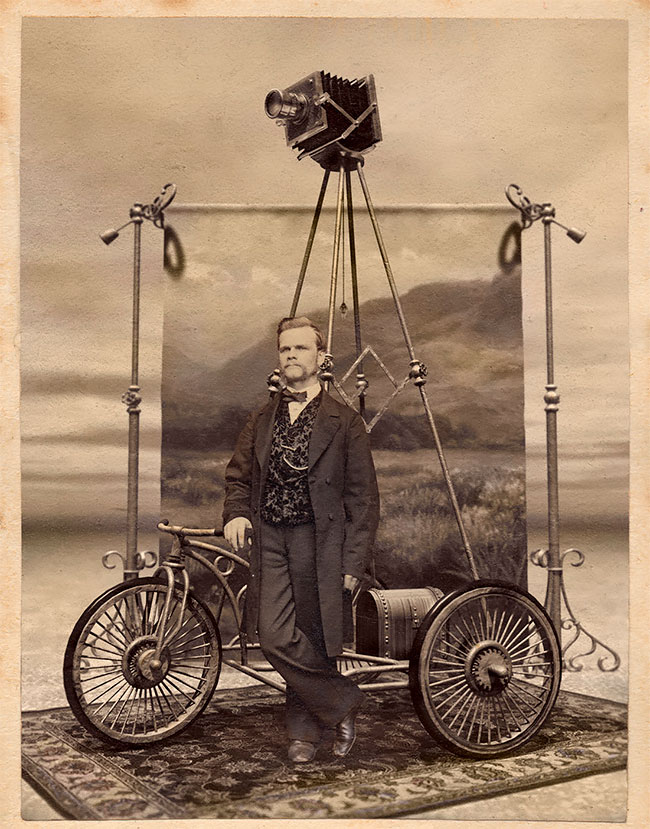 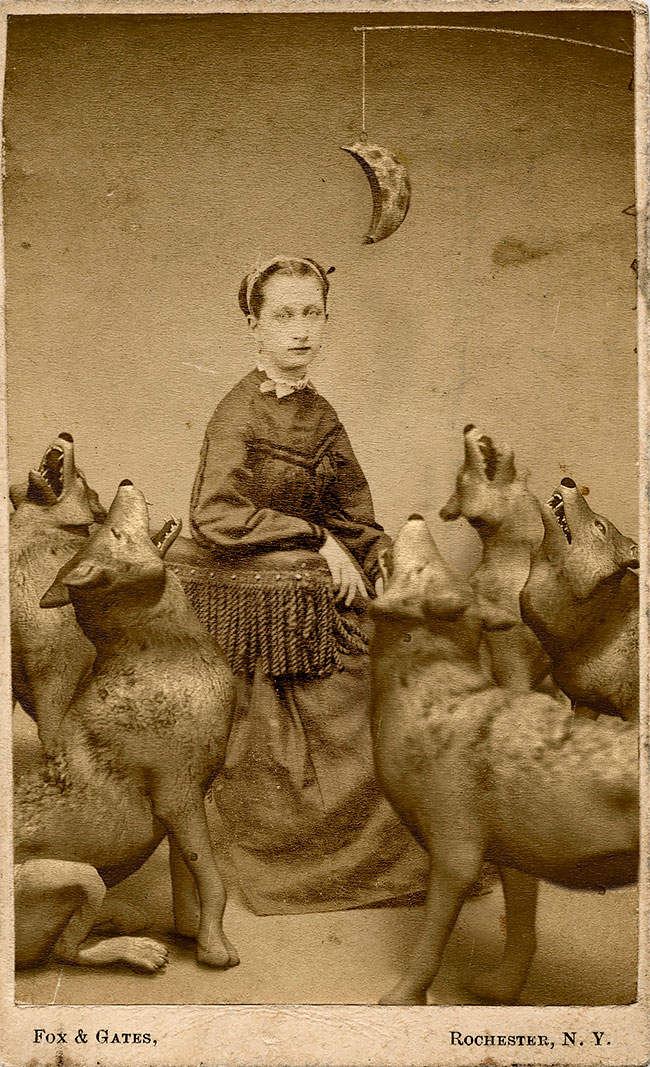 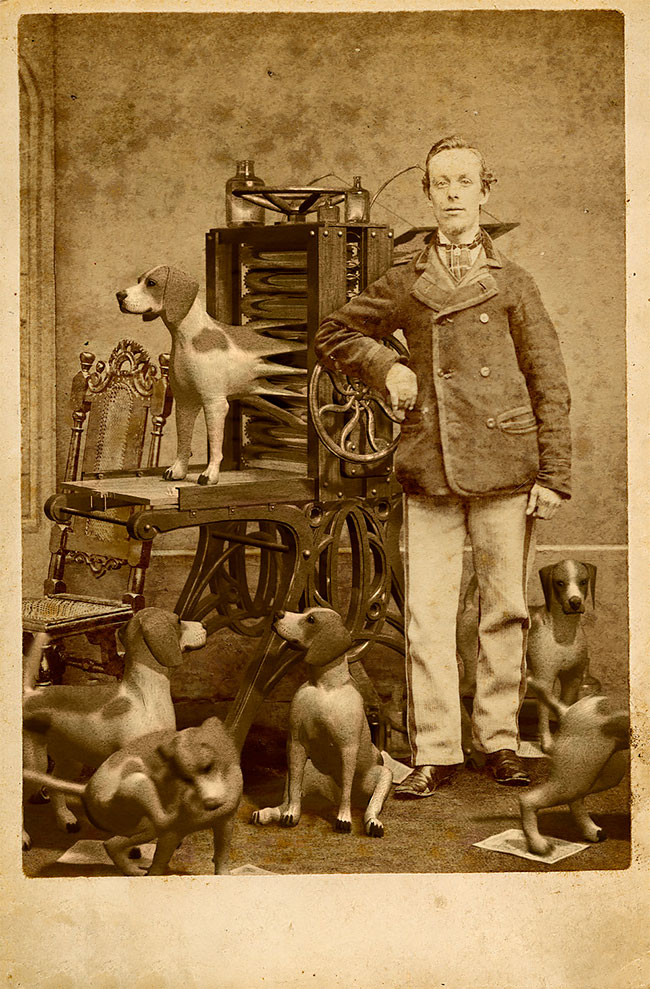 In “Mechanical Brides of the Uncanny,” artist Edward Bateman creates images that explore photography’s role as historical evidence. Presented as a collection of discovered carte de visites, this book documents a forgotten age of mechanical wonders. 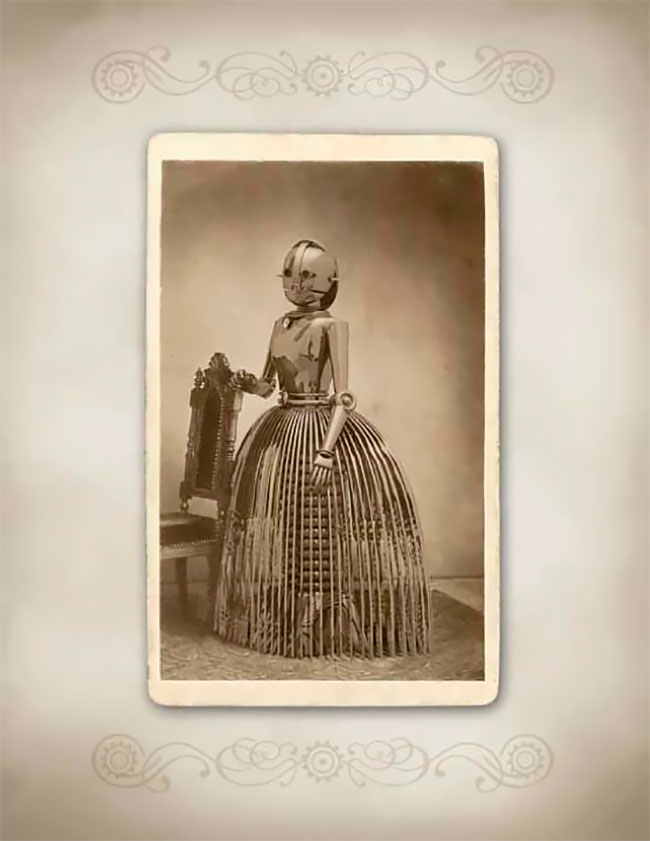 Carte de visites were an immensely popular form of photography in the last half of the nineteenth century. They were widely traded and collected, with subjects ranging from portraits of everyday people to those of luminaries. Bateman uses this history to question the idea that all photographs are bound to a particular moment in time. 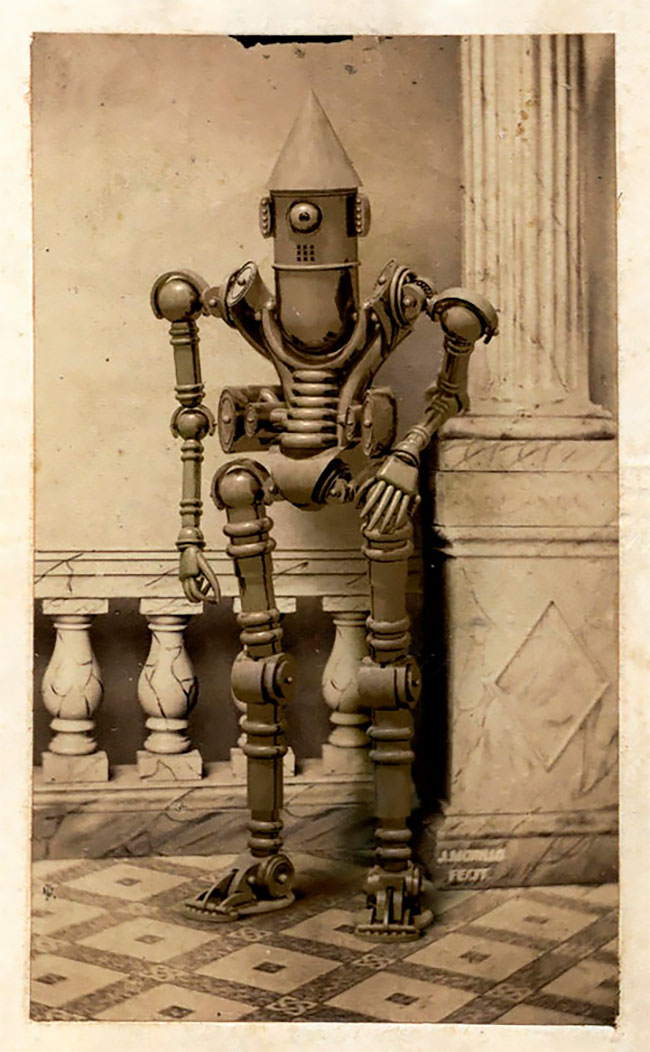 Combining 19th century imagery with fabricated automatons, he creates images of the past with an iconography that is usually used to depict the future. They invite a comparison between automatons and cameras; for the first time in human history, objects of our creation were looking back at us. He imagines an era where memory and change marched hand in hand, creating the world we live in today and leaving behind worlds that only exist in images. 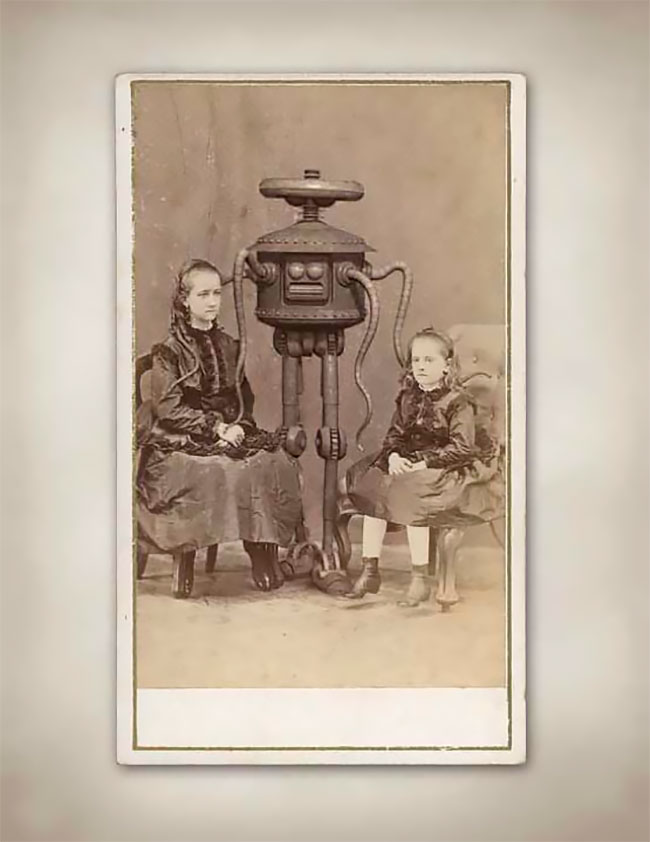 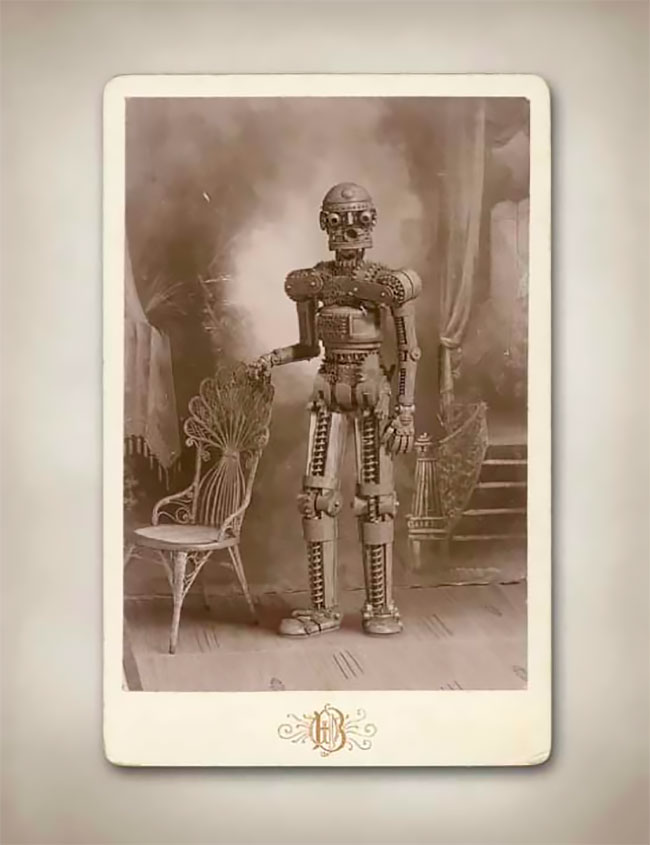 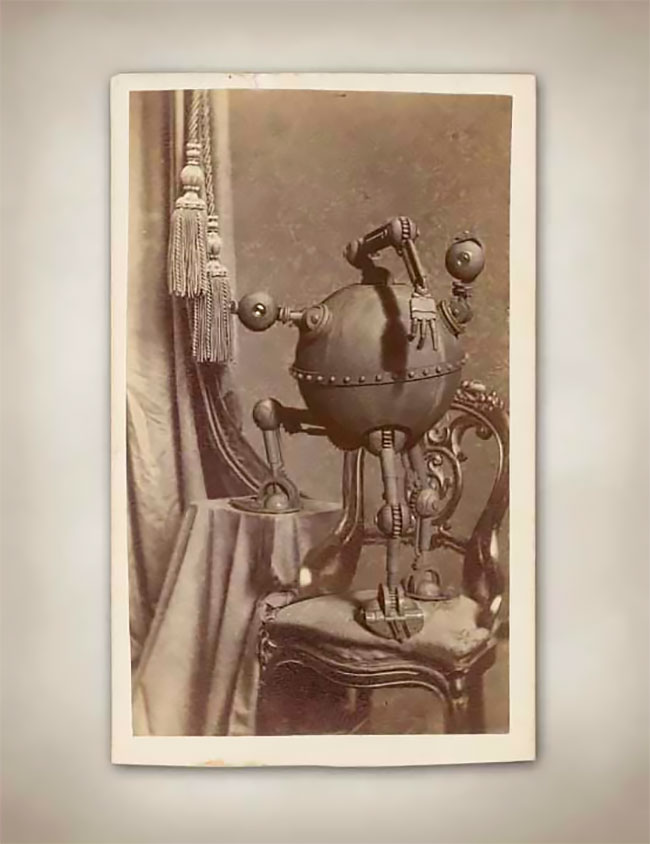 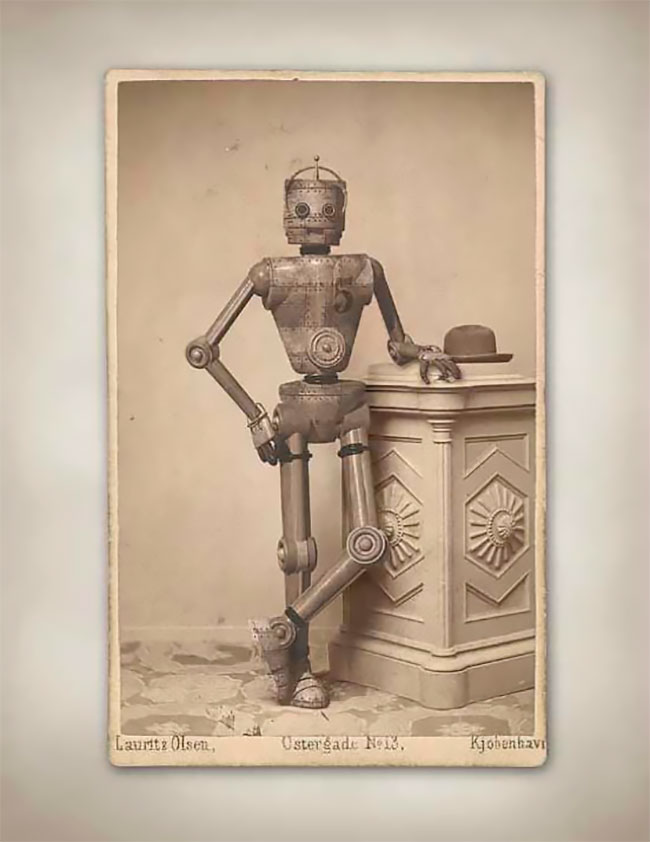 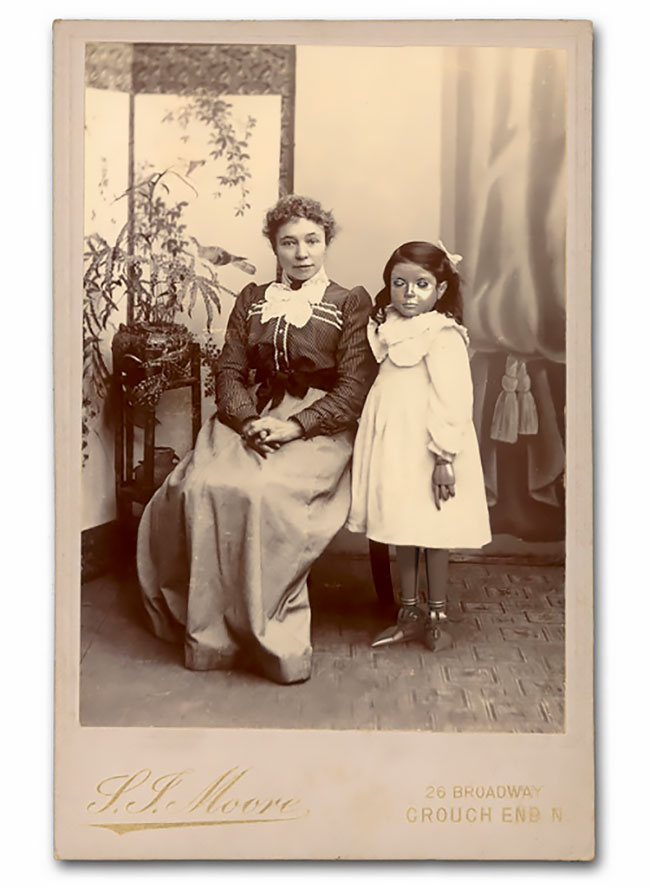 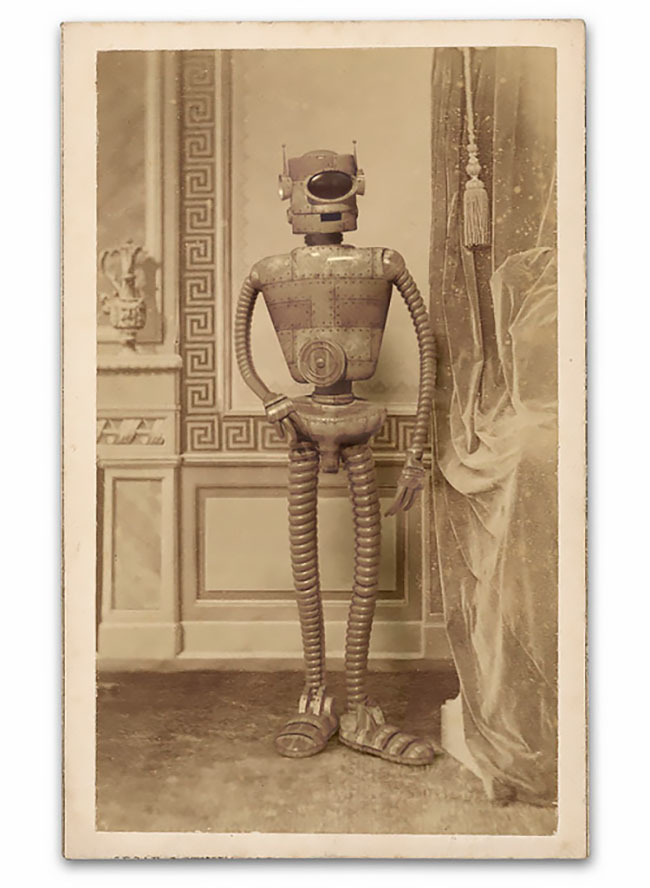 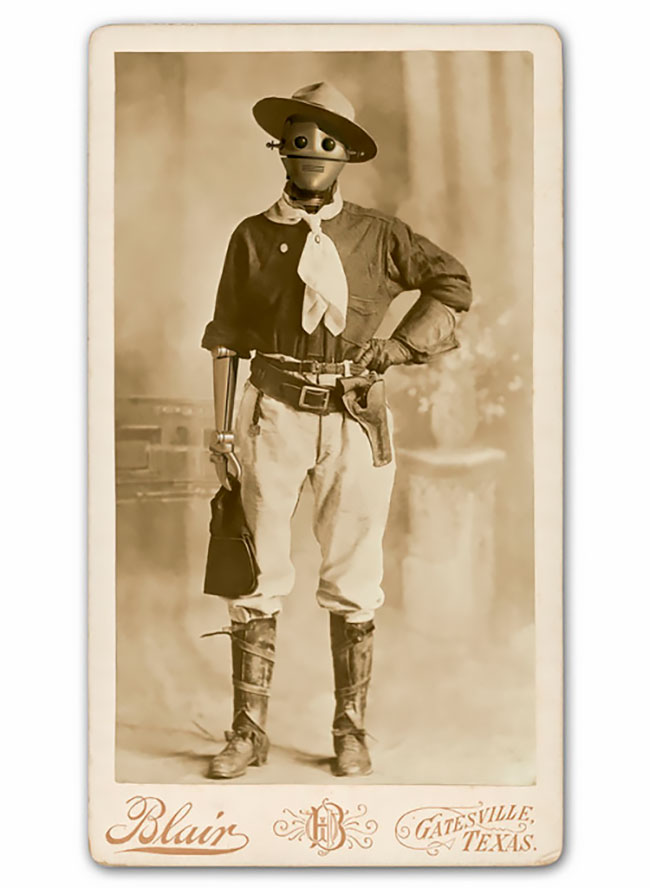 Gorgeous Portrait Photos of Carla Bruni as a Fashion Model in the 1980s and ’90s
Changing Cities: The Overlapping Of Past And Present
Art in A Petri Dish: The Agar Art Awards 2020
Spectacular Winning Photos Of The 2018 UK Underwater Photographer Of The Year Contest
The Snail Family In Medieval Art
Awesome Behind The Scenes Photos From The Making Of "Halloween"
Belarusian Swimmer In A Potato Field Turned Out To Be A... Polish Model
Shooting For New "Bavarian And Austrian Farmer Wives" Calendar
25 Beautiful Winning Photographs Of The Northern Lights Contest By “Capture The Atlas”
Kyoto Photographer Shows the Beauty of Autumn Through Gorgeous Foliage Photos
The Daily Life Of Darth Vader In 365-Day Photo Project
Couple Poses With Gas Masks For Their Wedding Photos To Protest Heavy Pollution In China
Stunning Artistic, Portrait and Surreal Photography by Man Ray in the 1920s and ’30s
Amazing Pictures of New York City in the early 1980s
In Between Times: Lyrical And Nostalgic Atmosphere Of The Soviet Ural Region In Beautiful Black And White Photographs Of Ivan Galert
Can You Guess Who Is Kissing In These Pics: Real Couples Or Friends?
Brutal 1938 Alfa Romeo 8C 2900B Lungo Touring Berlinetta
The Lost Art of Cassette Design: 1980s
11 Stunning Colorized Photos Showing The Street Life Of Victorian London From Over 140 Years Ago
17 Vintage Photos From The Public Archives To Give You A Different Perspective
Glamorous Photos Of Elvis Impersonators At The Elvis Festival
Photographer Radosław Kaźmierczak Captures The Urban Surrealism Of Poland In Great Details
These Dull Passport Photos Are Hiding Hilarious Secrets
Russian Literature: The Choice Of Asian Girls
photomanipulations, retro, sci-fi, spiritual

Belgian Man Discovered Stash Of Cars Hidden In Abandoned Quarry Since World War II
Your Portrait Poster-size? Everyday People Plastered all over Israel
September 25: This Day in Photos from the Past
An Artist Has Created A Series Using Professional Make Up That Would React To The UV Light Of A Black Light
Glow Worms Turn This New Zealand Cave Into Starry Night
Beautiful Photographs of Cheap Motels in 1970s America
Stunning Images of Freshly Frozen Cars Arrived to Vladivostok Sea Port
Magical Photos Of China Taken By The US Photographer Tristan Zhou
2014 National Geographic Photo Contest, Week 8
Gorgeous Minimalist Flower X-Rays From The 1930s
Source of inspiration since 2007. Proudly hosted by WebHostingBuzz.
Privacy Policy · Terms of Service · Content Removal Policy 🇺🇦 ❤️