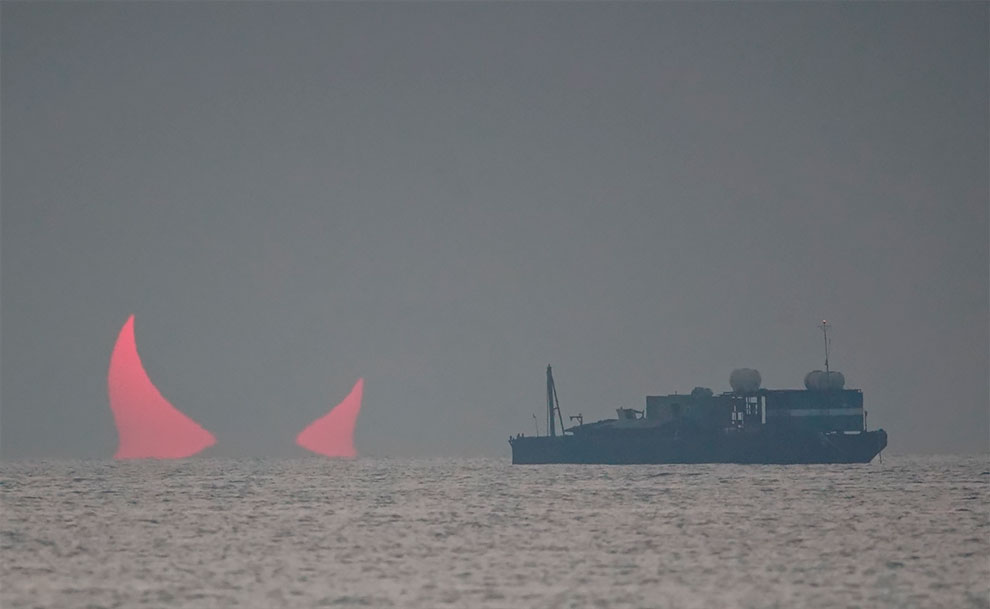 Athens-based photographer Elias Chasiotis was visiting Qatar in late December 2019 when he captured a photo of an annular eclipse that has since gone viral. Taken at sunrise as a part of a series, the image shows the moon covering the center of a red sun. The timing of the photograph turns the crimson star into curved horns emerging from the horizon.

According to NASA: “Yes, but have you ever seen a sunrise like this? Here, after initial cloudiness, the Sun appeared to rise in two pieces and during partial eclipse, causing the photographer to describe it as the most stunning sunrise of his life. The dark circle near the top of the atmospherically-reddened Sun is the Moon — but so is the dark peak just below it.

This is because along the way, the Earth’s atmosphere had an inversion layer of unusually warm air which acted like a gigantic lens and created a second image. For a normal sunrise or sunset, this rare phenomenon of atmospheric optics is known as the Etruscan vase effect. The featured picture was captured two mornings ago from Al Wakrah, Qatar. Some observers in a narrow band of Earth to the east were able to see a full annular solar eclipse — where the Moon appears completely surrounded by the background Sun in a ring of fire. The next solar eclipse, also an annular eclipse, will occur in 2020 June.” 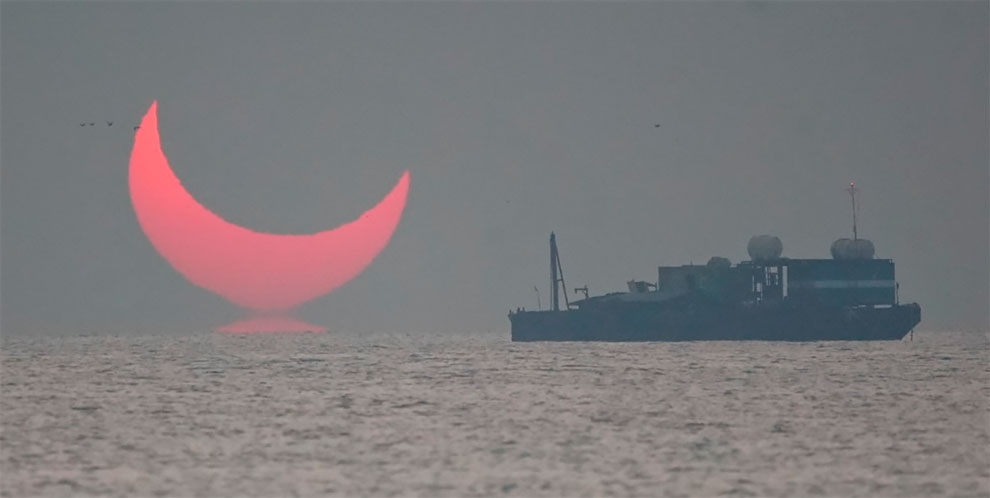 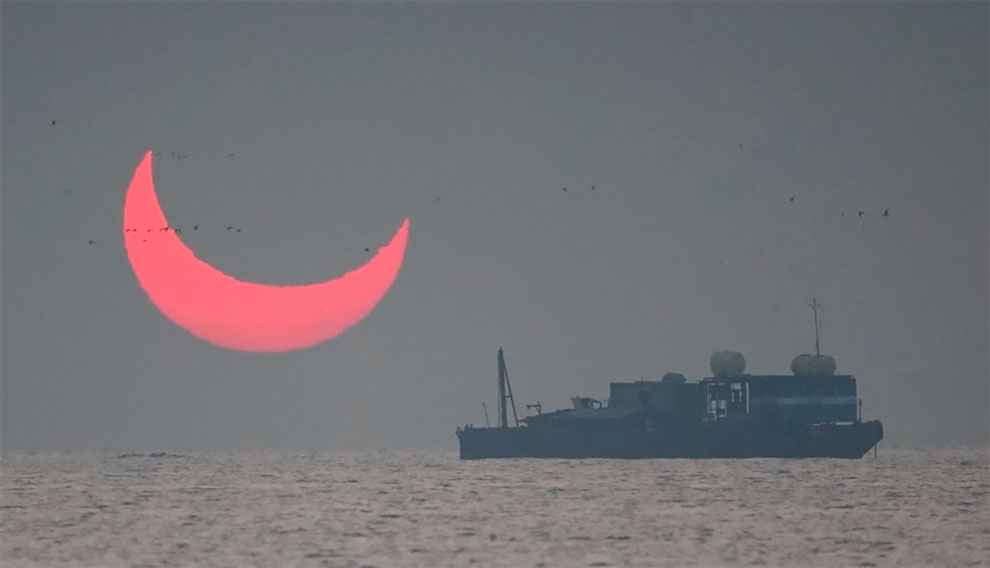 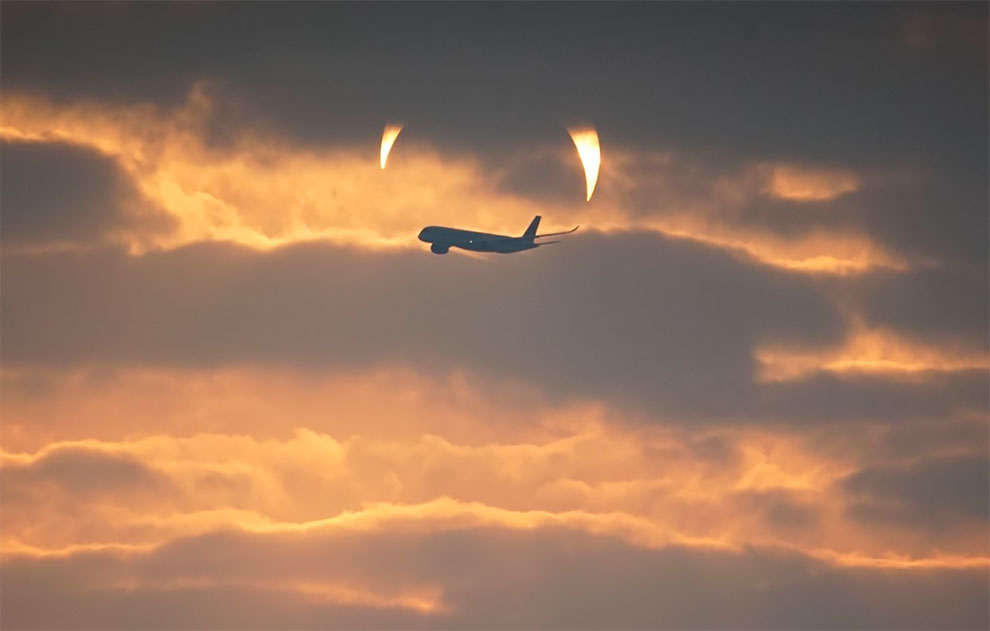 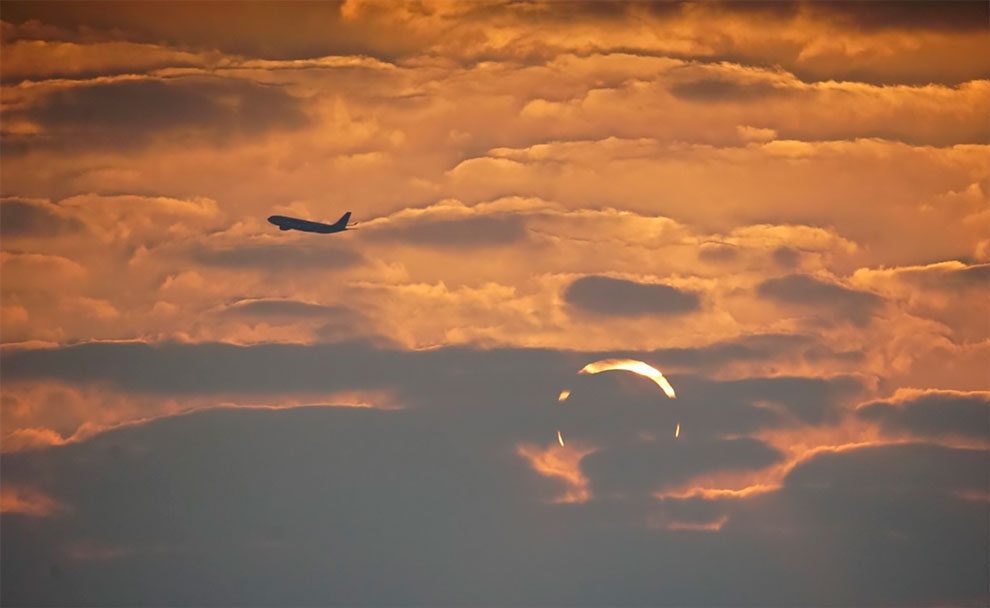 Drone Captures Wedding Photos Like You've Never Seen Before
Rainy Saint Petersburg In Photographic Artworks By Eduard Gordeev
Photo of the Day: Jenny From The Block
Rare 'Flying Rainbow' Spotted over Southern China
Hong Kong’s Human Battery Hens: Claustrophobic Images Show How Slum Families Squeeze Their Lives Into The Tiniest Apartments
A Camera Made of 23,248 Coffee Stirrers, Powered by A Raspberry Pi, and Controlled with A Nintendo Controller
Amazing Vintage Photographs Documented Inca Culture And Life In Peruvian Andes, Captured By Martin Chambi In The Early 20th Century
Christmas in New York: Rare Photos from Turn of the Century
A Collection of Incredible Rare Color Photographs of France in World War I
Photoshoot Imagines The Little Mermaid's Wedding In Real Life
Amazing Black And White Photographs Of All About Photo Magazine Awards 2022
2014 National Geographic Photo Contest, Week 9, Part 1
Plasticity And Dancing: Photographic Art By Sergey Sukhovey
Photographer Puts Everyday “Selfies” to Shame
A Photographer Compares Portraits of Cats and Their Owners, and the Results Are Too Similar to Be Ignored
Daredevil Photographer And A Storm Chaser Captures Stunning Pictures Of Natural Disasters
Pizza In The Wild: A Surreal Photo Project By Jonpaul Douglass
The Looking Back On Sony World Photography Awards
Life Of The 1850s: Amazing Photos That Show How The World Looked Like Over 160 Years Ago
Best Photos From 2021 International Wedding Photographer Of The Year Contest
Artists Recreate Iconic Posters of Movie Classics with Black Models
Tiny Critter Becomes a Big Wheel
Photographer Chris Cline Can’t Get Enough Of His Dog So He Supersizes Him
Cheerful Photos of Teenage Girls in the 1940s
eclipse, qatar, sunrise