A look at the winning entries into the Drone photo awards 2022, including the overall winner showing a secondary fissure a few hundred metres from the main crater of the Fagradalsfjall volcano in Iceland. 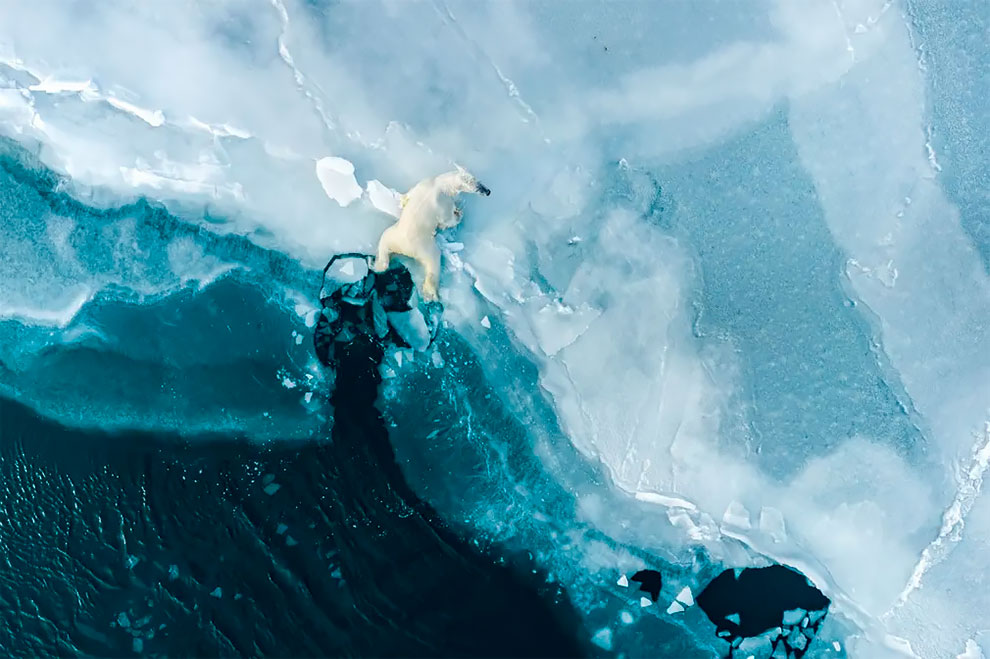 A young polar bear, a yearling, is playing in the water, testing the fresh ice and jumping back and forth with his sibling, while their mother is resting nearby. This image is the result of five months in the field, living with and near the bears in a remote camp on the east coast of Svalbard. 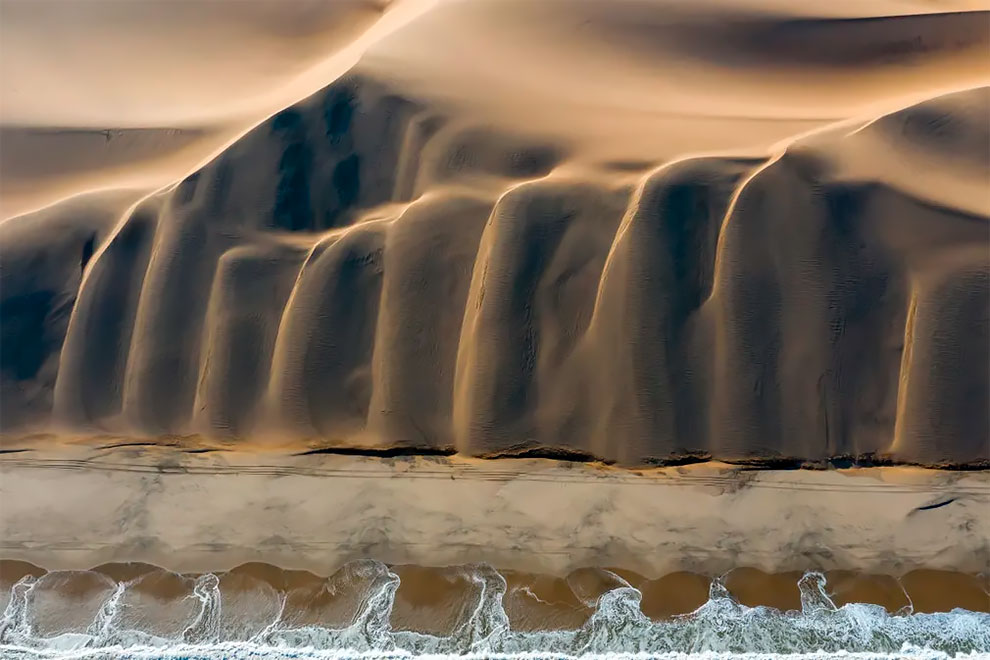 The meeting of the desert and the ocean. As the drone climbed higher, the photographer noticed the light highlighted the shapes of the dunes flowing into the southern Atlantic Ocean. 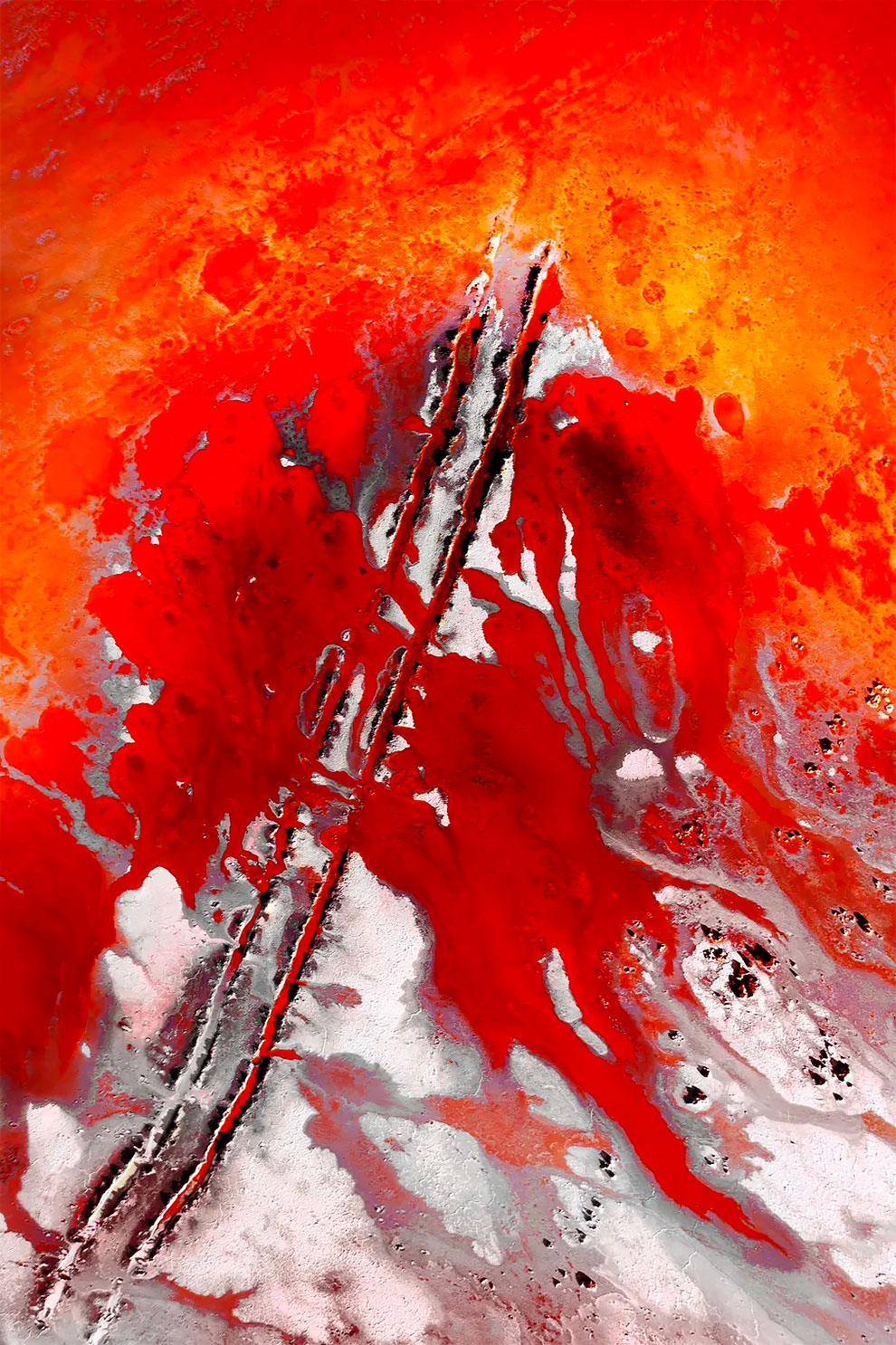 A portrayal of the ferocity of the effects of extreme salinity on the environment, creating a wasteland of multicellular life, reminiscent of Australia’s bushfires. The embedded tyre tracks carved in the salt pan give idea to a burning bridge leading the viewer straight into nature’s wrath. 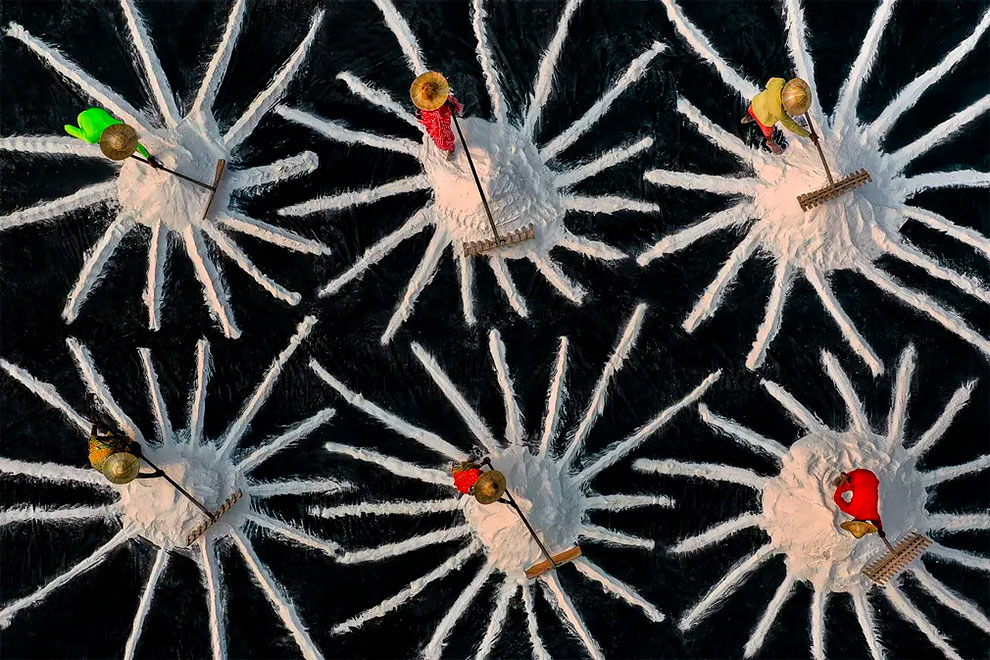 Some labourers at work in a salt pan where they move the salt to form circular lines, allowing a slow evaporation in the sun. At the end of the day the salt will be collected in baskets. 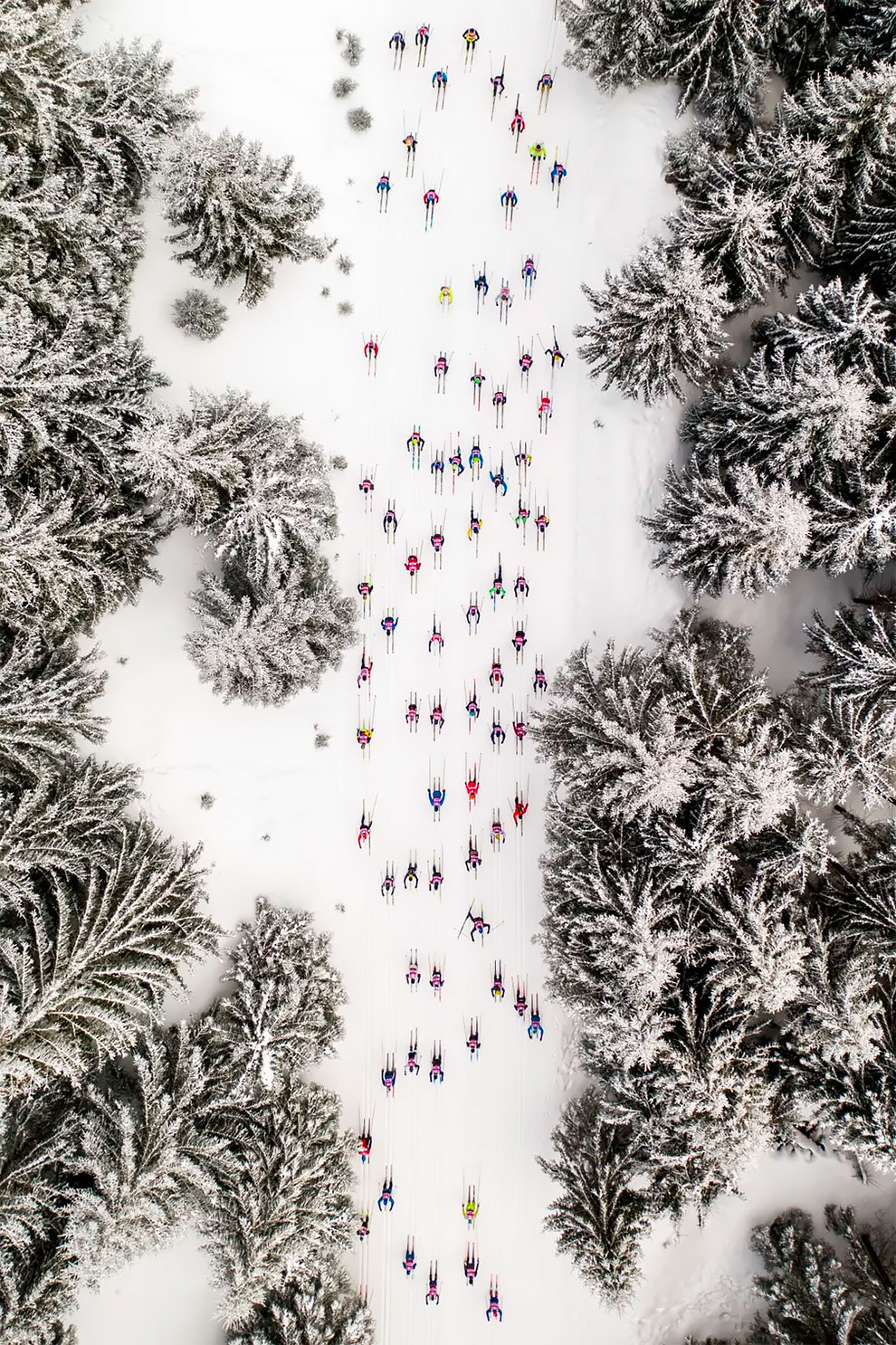 An aerial view of competitors at the annual Bieg Piastów ski tournament held in Szklarska Poręba in March. Skiers whiz by in their colourful clothing on a track flanked by snow-covered trees.

Sport. Runner-up: Once Upon a Wave by Phil De Glanville 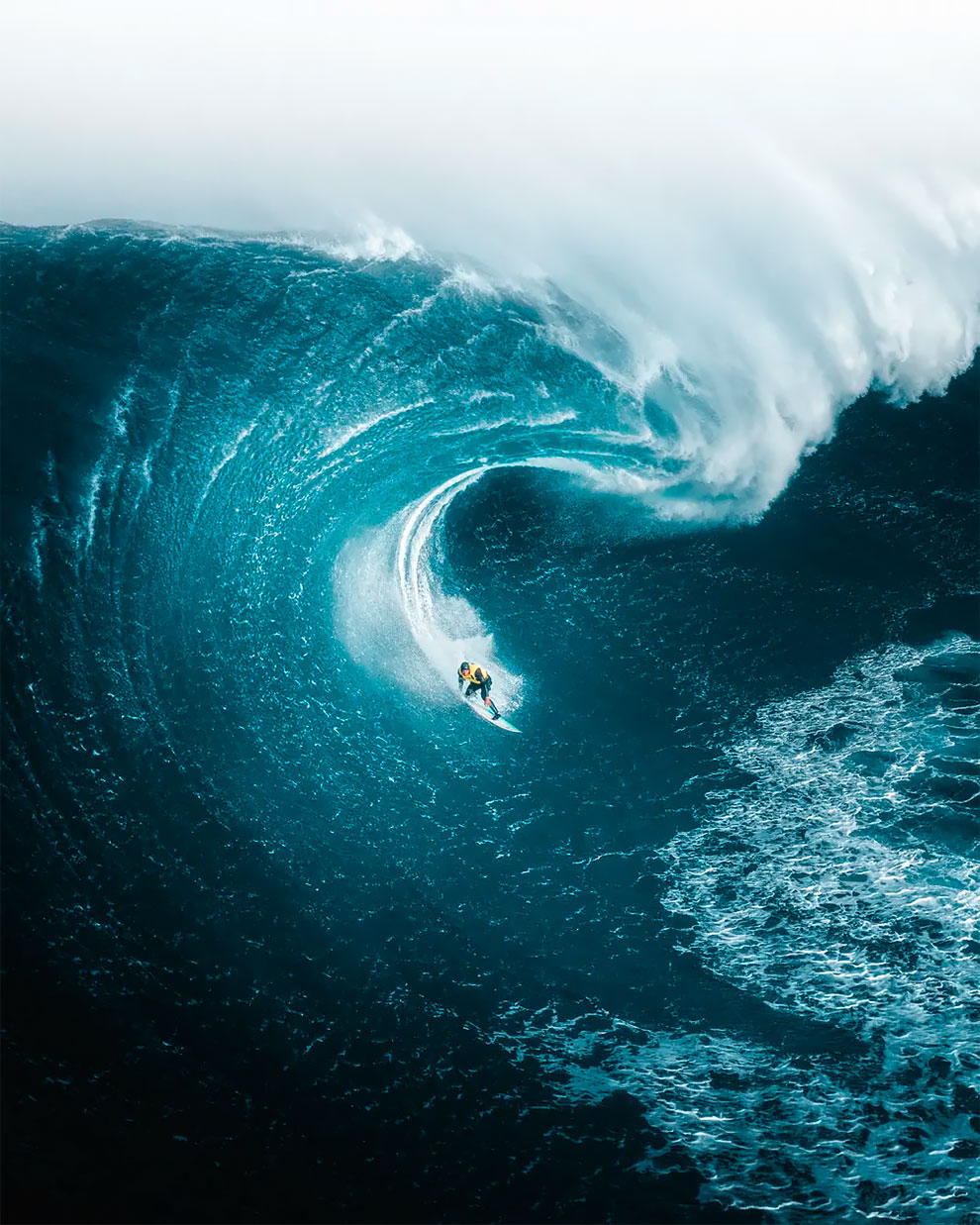 The surfer Chris Ross charges down a monstrous wave as it begins to barrel above him. The ocean seems to swallow the athlete, who looks like a small yellow dot in the blue immensity of the wave. Shot at a surf break called The Right in Western Australia.

People. First classified: Sleeping on a Boat by Anindita Roy 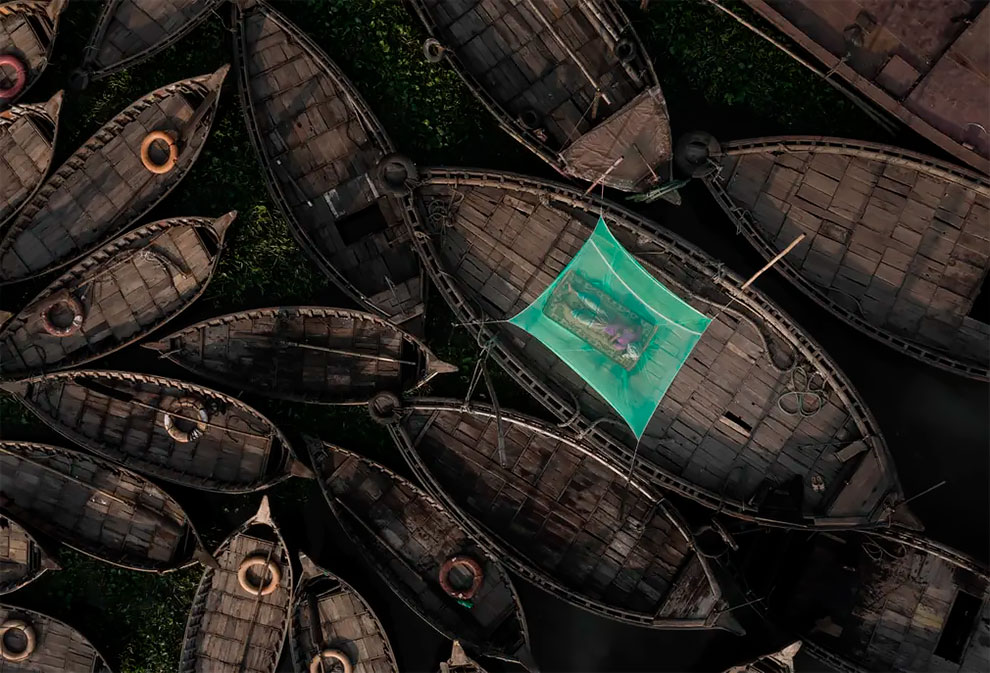 The city of Dhaka in Bangladesh is located on the bank of the famous Buriganga River. People from both sides of the Buriganga cross it using small boats. 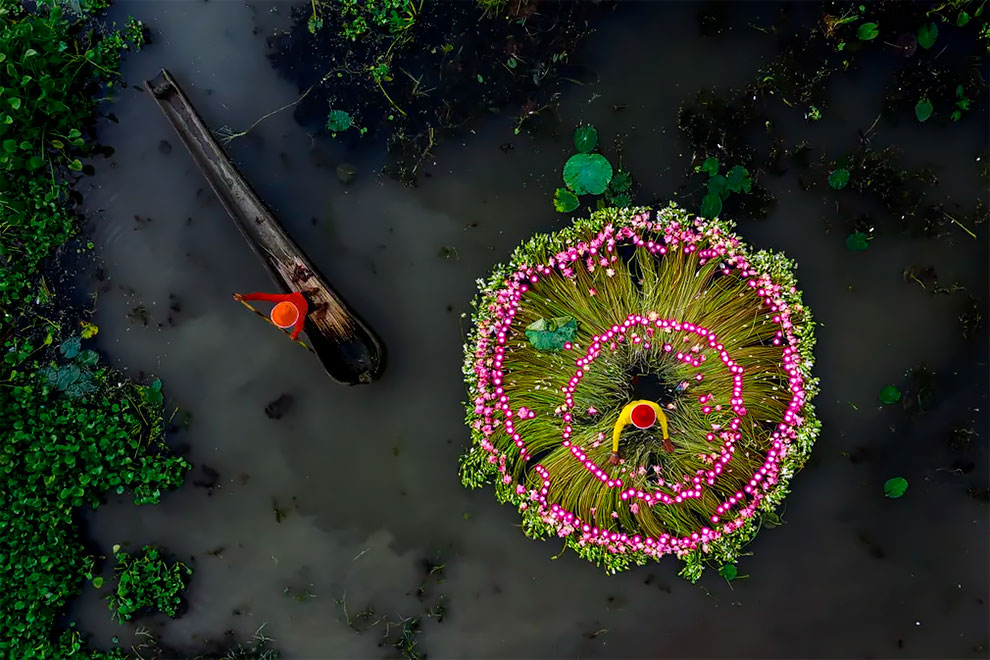 This image was taken by a drone to show the working time of rural people during the monsoon season in the wetlands of West Bengal. Two workers occupy the scene with their colourful hats and clothes. Waterlilies create two concentric coloured rings from which one of the two characters seems to emerge. 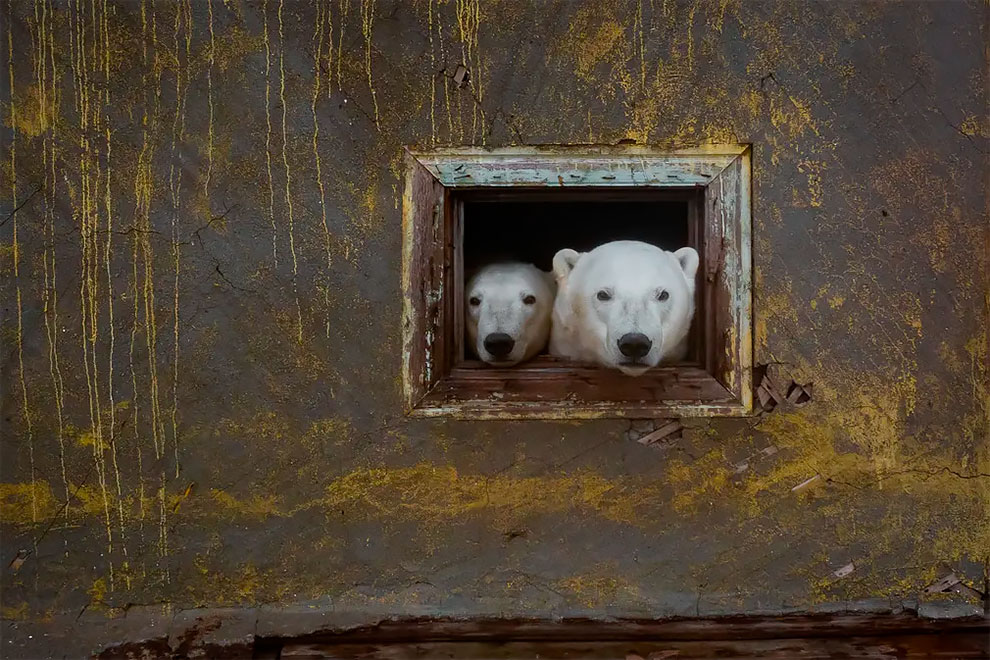 On a sailing trip to Chukotka and Wrangel Island, Kokh covered more than 1,200 miles along the coast. To shelter from an incoming storm, he approached a small island, Kolyuchin, a former meteorological station in the days of the Soviet Union. After seeing movement in the windows of an abandoned village, he caught a glimpse of polar bears through his binoculars. Since it was too dangerous to land on the island, he used a drone equipped with low-noise propellers to photograph the animals without disturbing them. 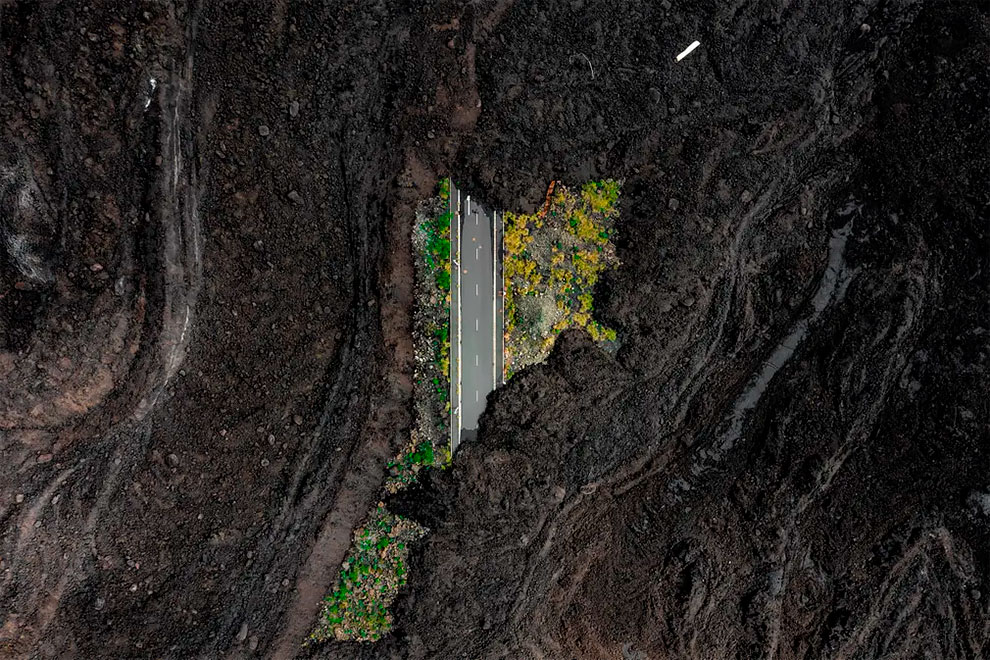 The huge eruption of volcano Cumbre Vieja hit the island of La Palma at the end of 2021. For three months the lava river destroyed more than 3,000 buildings, 56 miles (90km) of roads and endless hectares of banana plantations, leaving more than 2,000 people homeless. The landscape changed completely as a result. 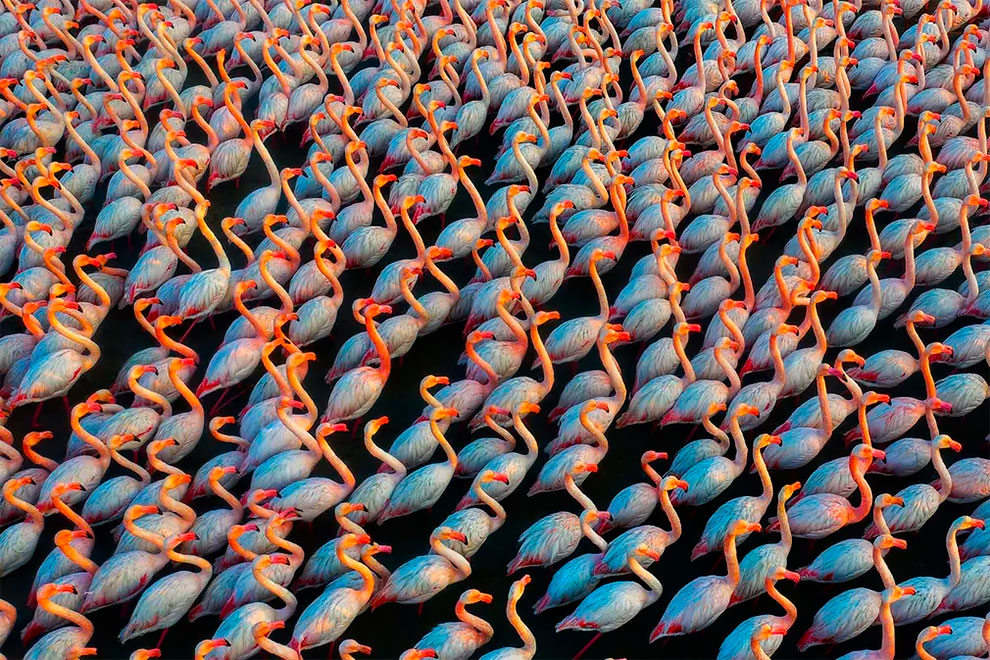 Flamingos sleep together at night for greater security and stay close during the day. In this crowd of bodies the colourful nuances of their plumage and the reflections of the light are eye-catching.

Urban. Runner up: After Sand Storm by Yura Borschev 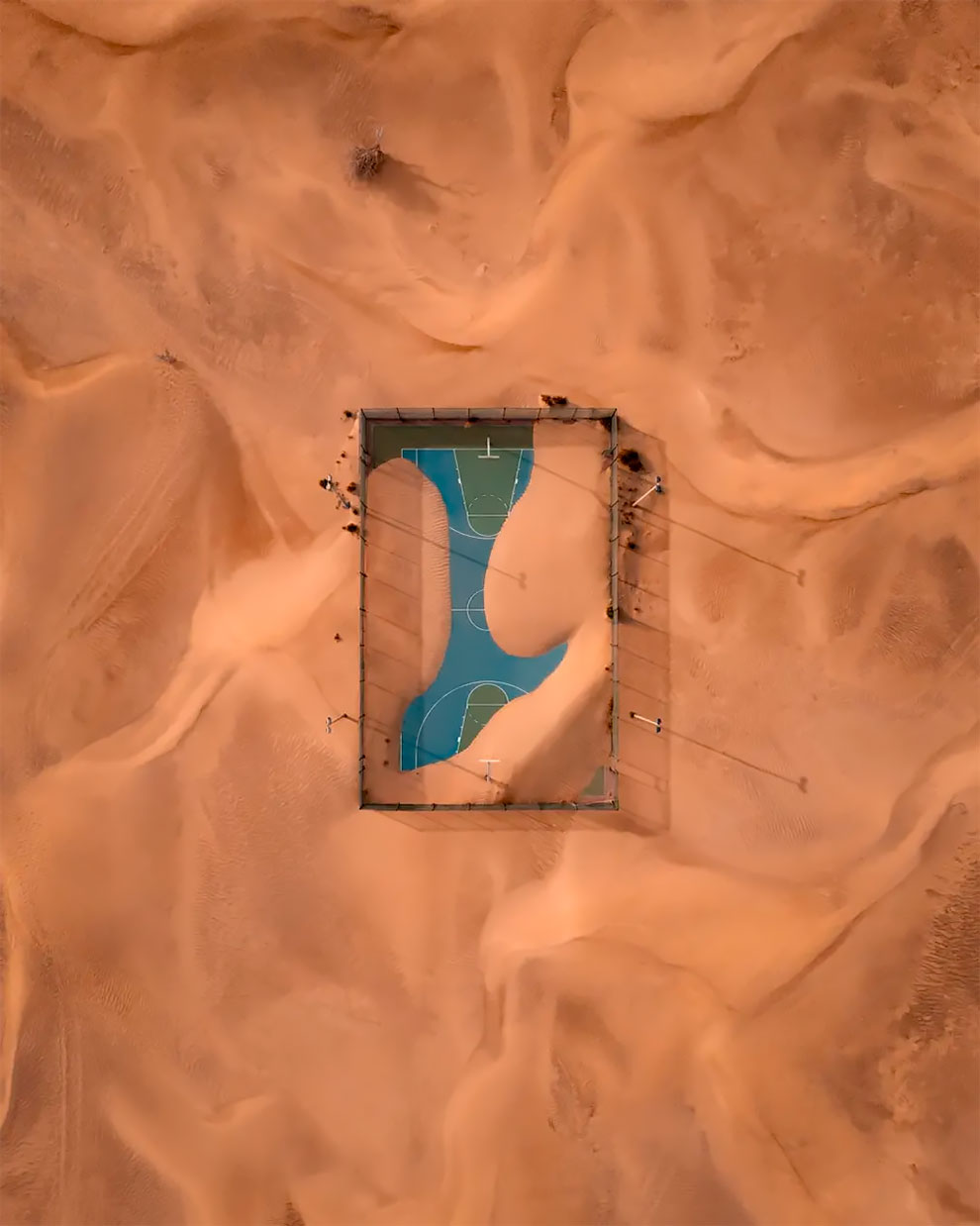 A basketball court after a sand storm in the United Arab Emirates. The sand is partially covering the field, letting the viewer get a glimpse of its original shapes and colours. It is one of the greatest finds in the author’s sport courts collection shot in 2021.

Wedding. First classified: Like a Painted Picture by Krzysztof Krawczyk 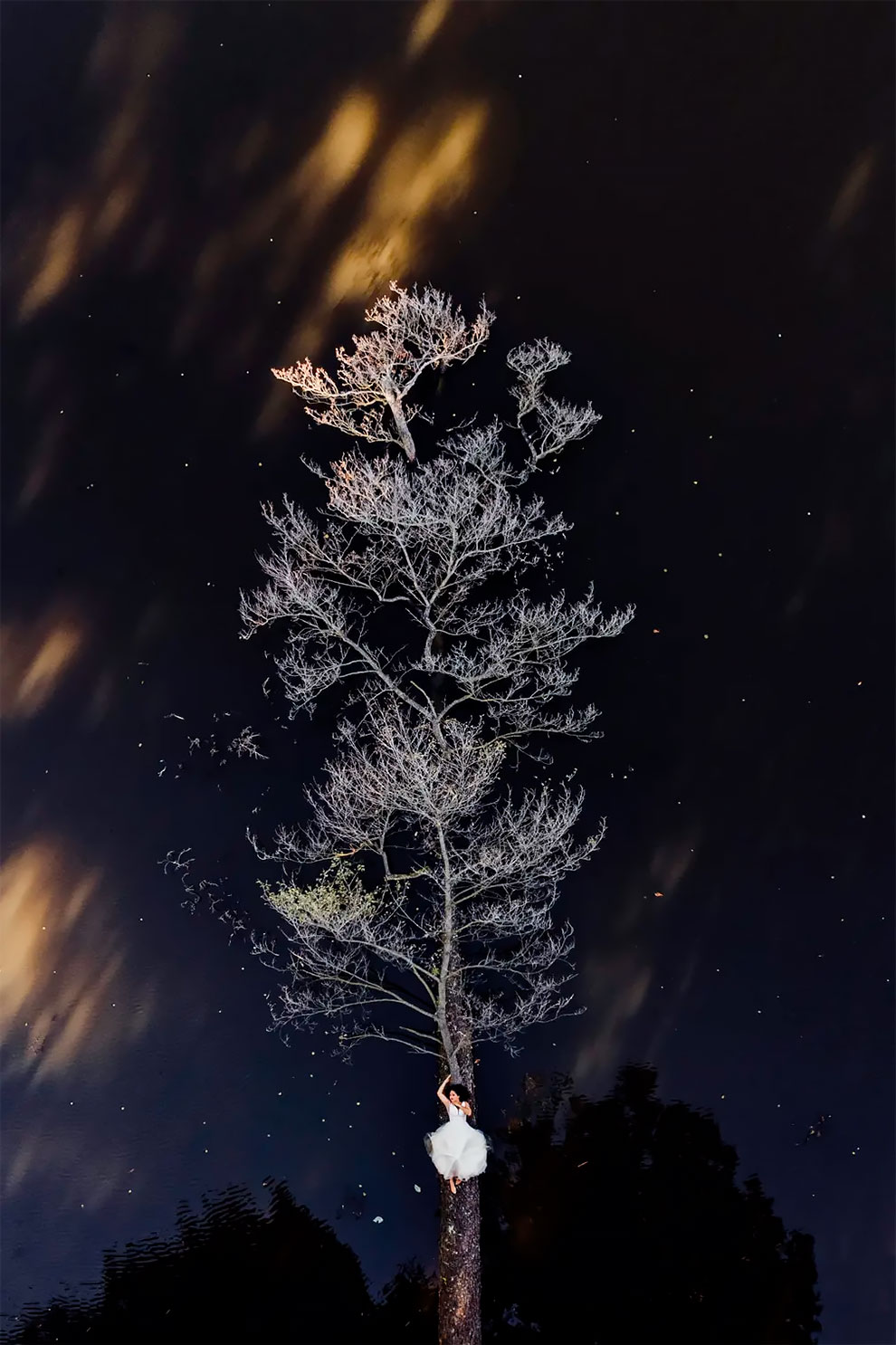 The effect of the sun on the water, a felled tree and a brave bride lying on it: a magnificent picture drawn by nature. The surface of the water looks like a starry night sky, while the bride resembles a dreamy princess. 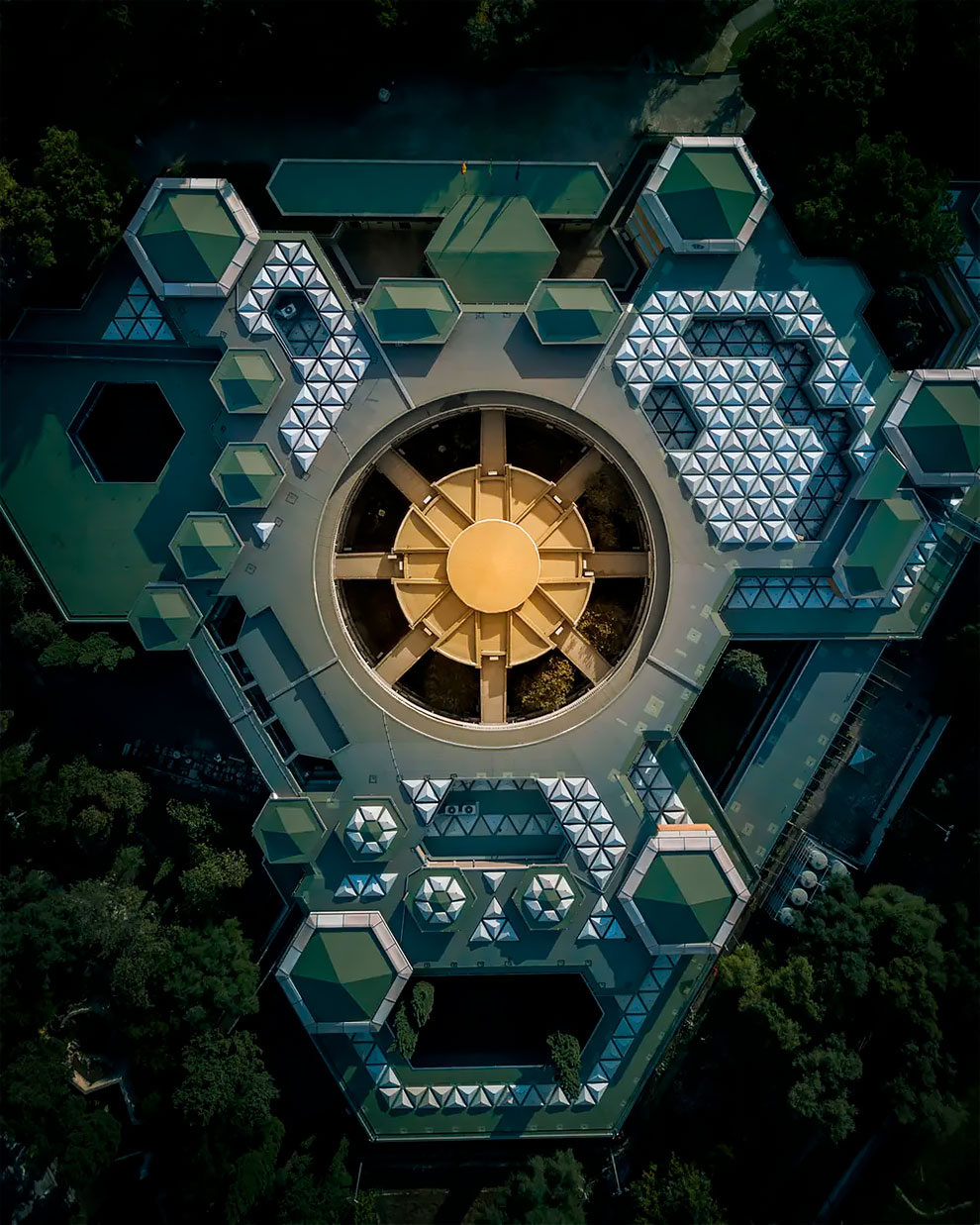 Museo Archeologico Regionale Paolo Orsi, from a series of aerial top-down photographs of nine buildings around the world with an unusual shape and rooftops.

Wedding. Runner-up: I Think It’s Around Here by Fabián Ortiz 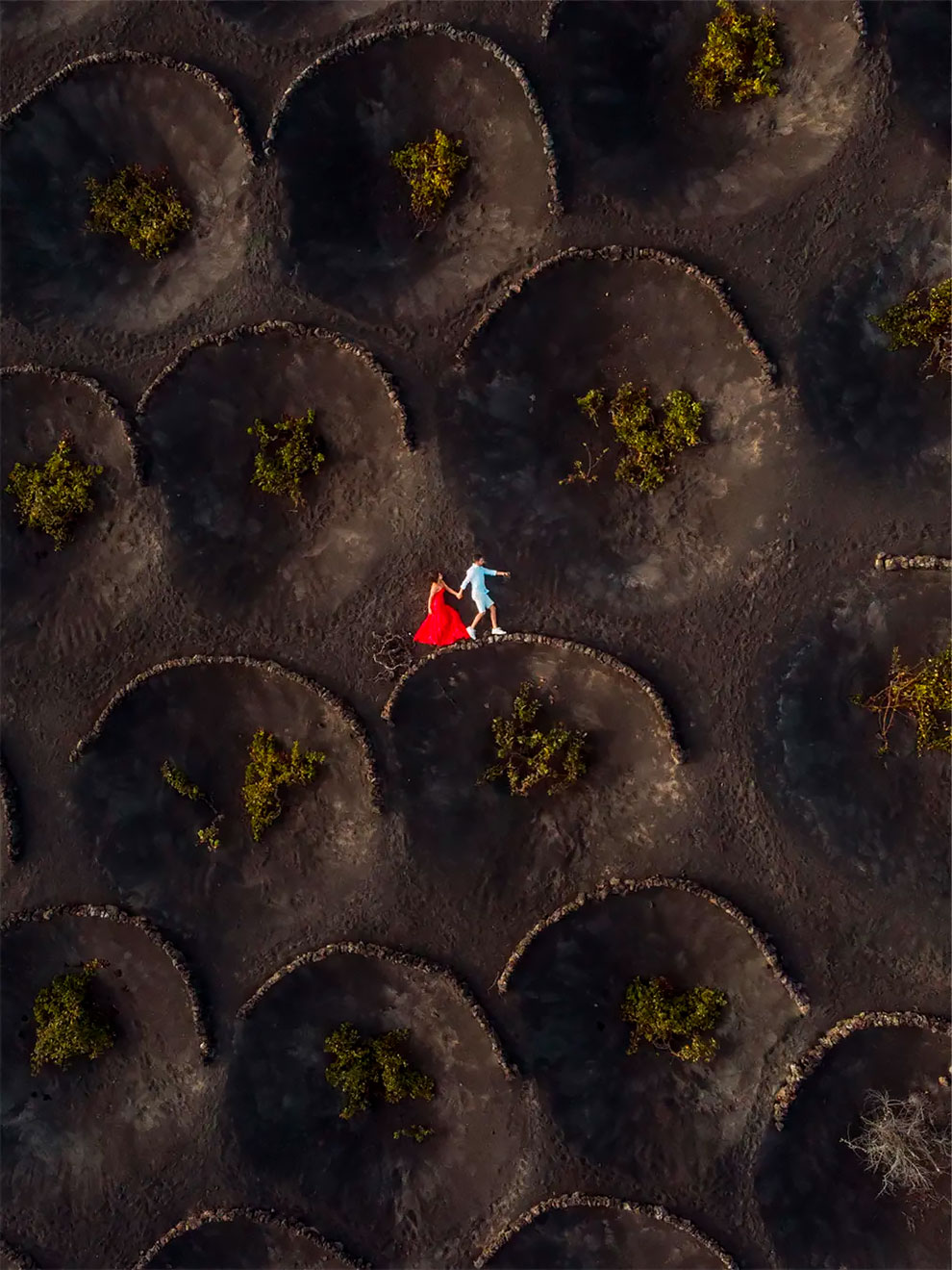 Even if you wander through the most inhospitable places, as long as you go hand in hand with the right person you will be able to reap the fruits of love, just as sweet wine is grown in La Geria, a place of volcanic and hostile lands on the island of Lanzarote.

Photo of the year: Big Bang by Armand Sarlangue 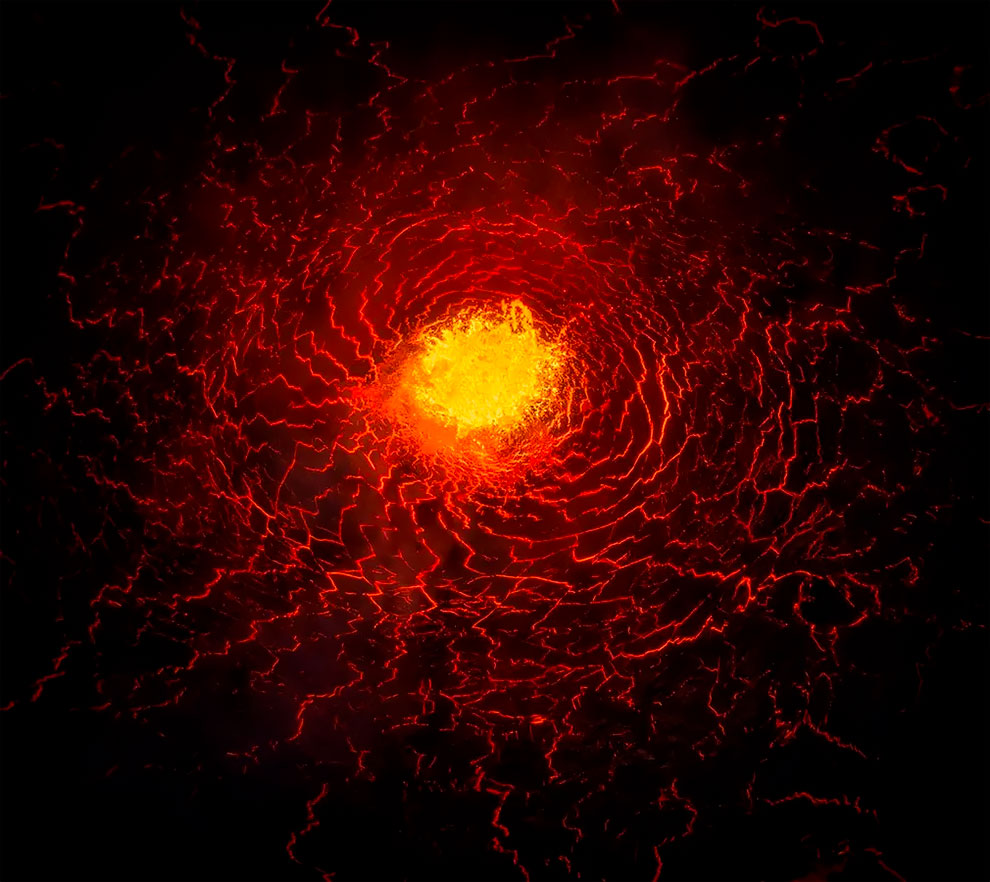 A secondary fissure a few hundred metres from the main crater of the Fagradalsfjall volcano during its last eruptive phase. The shot was captured as a storm hit west Iceland, with rain and strong winds. Owing to the difficult conditions, a drone capture like this is unique.