Photo of the Day: Free As A Bird 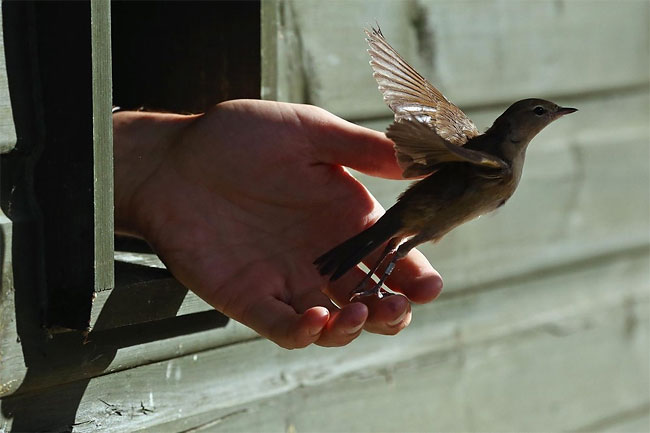 A warbler is released from the ringing hut after being recorded on a private reserve in East Sussex on August 21, 2013 in Rye, United Kingdom. The BTO are currently in the process of recording migrating hirnundines and other birds at the reserve. Hirundines comprise of Sand Martins, House Martins and Swallows, all of which roost in high numbers on the reserve over summer before continuing their migratory route back to Africa. The reserve is close to the East Sussex coast, and forms an ideal habitat for many resident and migratory birds, comprising of low lying reedbeds and marshy peat bog. The site is one of the worlds largest ringing stations, and with the help of BTO staff, trained ringers and volunteers as many as 1000 hirundines can be ringed in one evening at this time of year. Many other birds are also ringed including Nightjar, Grasshopper Warbler and Sparrowhawk. Volunteers capture the birds using long mist nets which are erected and run through the reedbeds before the birds come in to roost every evening. The birds details are then recorded before being released the following morning to contiinue it’s journey. The Information gathered including age, weight and sex allows the BTO to monitor long-term population and global migration patterns which is important for conservation. (Dan Kitwood/Getty Images)