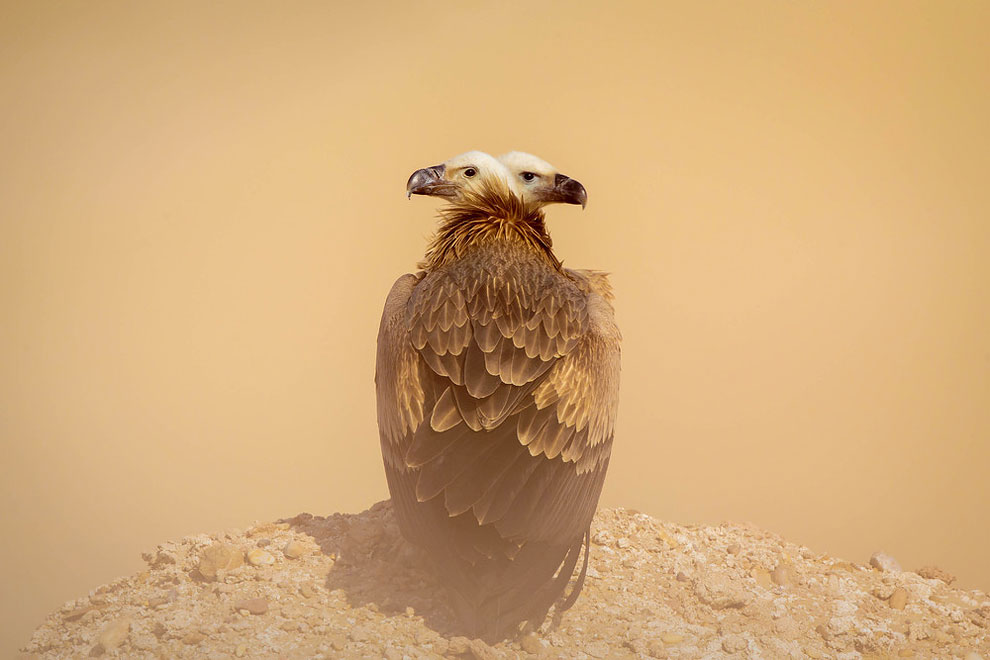 “Double head vulture”. On the day of windy days during raptors migration some people in my country start to catch these tired raptors, so in this day we go to photograph some raptors and we saw these tow tired vultures, so we start to drag them away from the hunters until they reach a good hidden place, to make them safe until they start a new journey. Photo location: Kuwait. (Photo and caption by Mohd Khorshed/National Geographic Photo Contest) 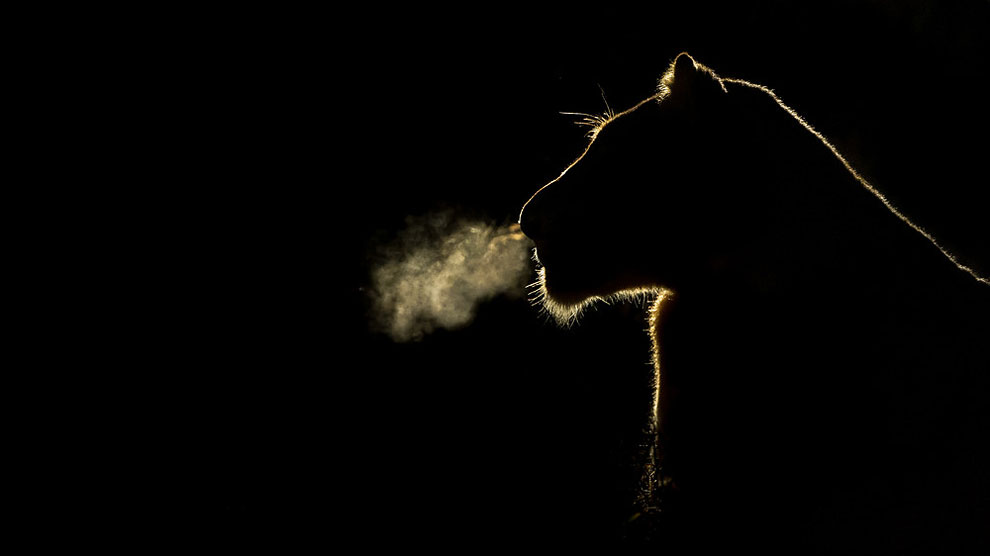 “The Dark Side”. A lioness backlit by a spotlight, lies alert to the distant calls of the territorial males, her breath visible as she breathes out into the chill of the winters night. Photo location: Sabi Sand Game Reserve, Greater Kruger National Park, South Africa. (Photo and caption by Brendon Cremer/National Geographic Photo Contest) 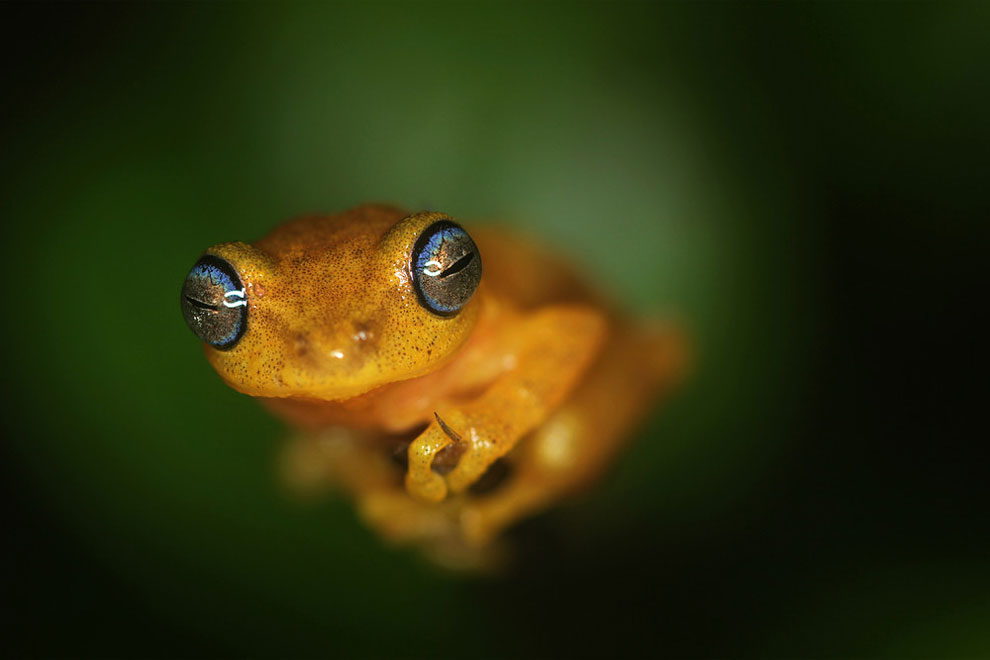 “Curious Eyes”. A Coorg Yellow Bush Frog (earlier known as Blue-eyed Bush Frog) getting curious about the lens. It was photographed when it climbed a small shrub top using a diffused flash, during the night hiking through the jungles of Western Ghats of Agumbe (Karnataka, India). This species of frog has spectacular annular blue in its eyes. They live in trees and are nocturnal. Photo location: Agumbe, Karnataka, India. (Photo and caption by Mohit Verma/National Geographic Photo Contest) 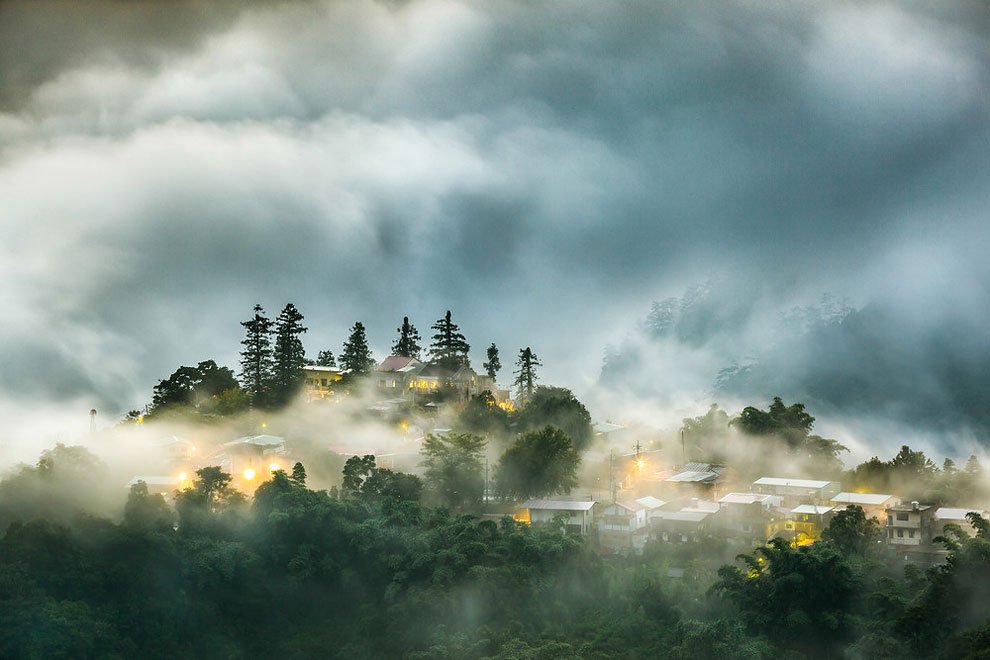 “The rebirth of first Atayal tribe after 921 earthquake”. The Atayal (Taiya) tribe, which is the second largest tribal group of fourteen indigenous tribes in Taiwan, resides mostly in central and northern Taiwan.It is rumored that Ruei-yian tribe is the first Atayal tribe.However, the 921 earthquake in 1999 shattered the dwellings and landscapes in Ruei-yian tribe.The reconstructions has lasted for 12 years. In 2011 , the tribe that is reborn seems like a castle floating in the sky, winning it the laudatory title “Hanging city”. Photo location: Ren-ai Township, Nantou Count, Taiwan. (Photo and caption by Haw Haw Tseng/National Geographic Photo Contest) 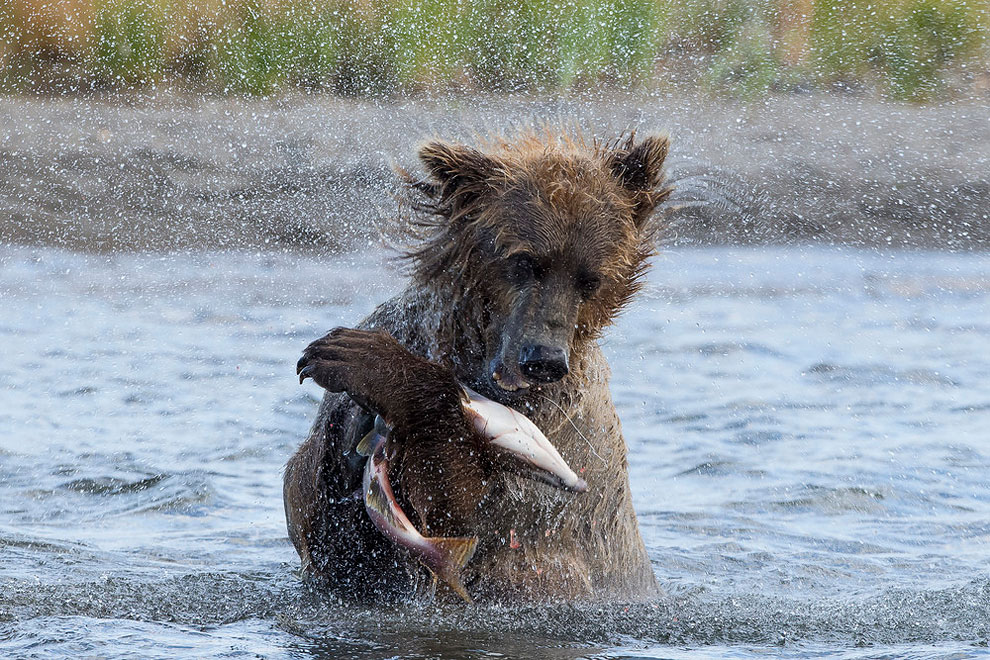 “Shake Down”. This Grizzly bear shakes it’s salmon prey after pouncing on it in the creek. Photo location: Katmai, Alaska. (Photo and caption by Mark Davies/National Geographic Photo Contest) 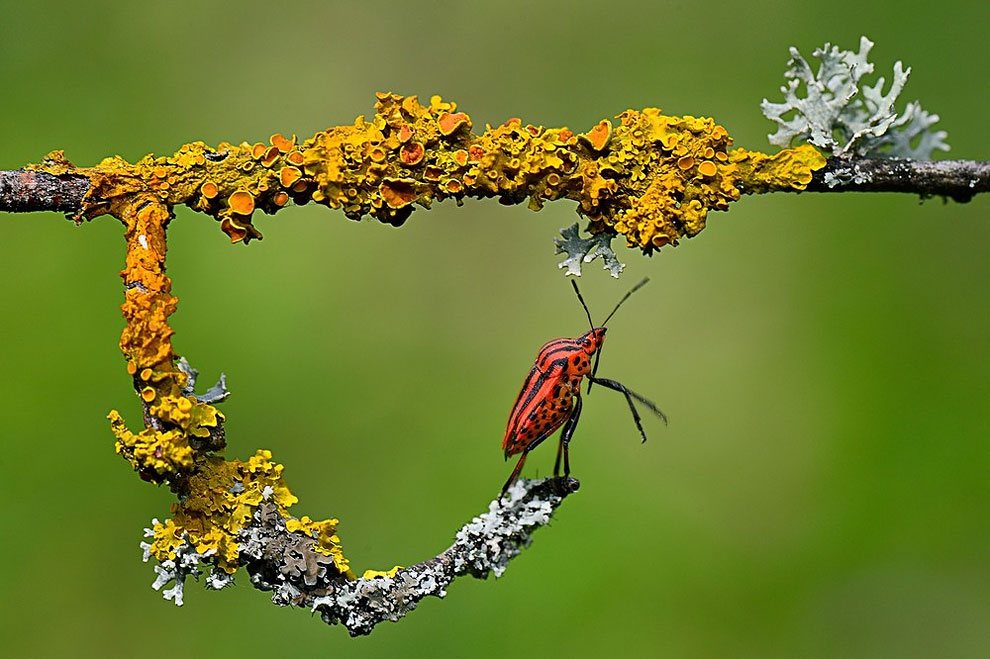 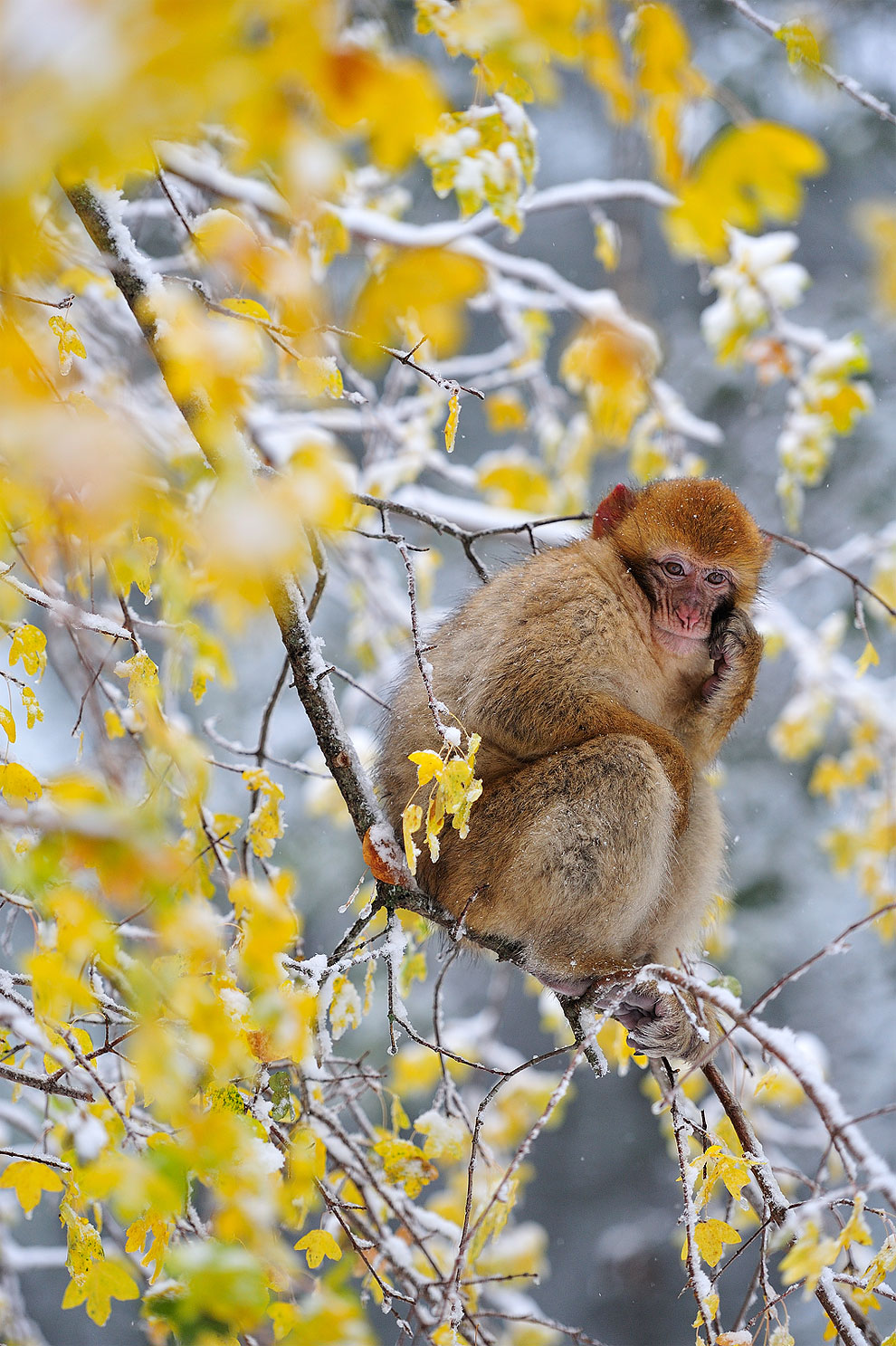 “The Thinker”. The Barbary macaque is a monkey of many distinctions. It is the only primate, other than humans, north of the Sahara on the African continent, and it’s the only macaque living outside of Asia. Other macaque species once ranged from East Asia to northwest Africa; only the Barbary macaque weathered ecological changes to hold on in Africa. Photographer Francisco Mingorance spent more than a year taking pictures of Macaca sylvanus high in the Middle Atlas mountains, home to one of the largest Barbary macaque populations. Photo location: Morocco. (Photo and caption by José Mingorance/National Geographic Photo Contest) 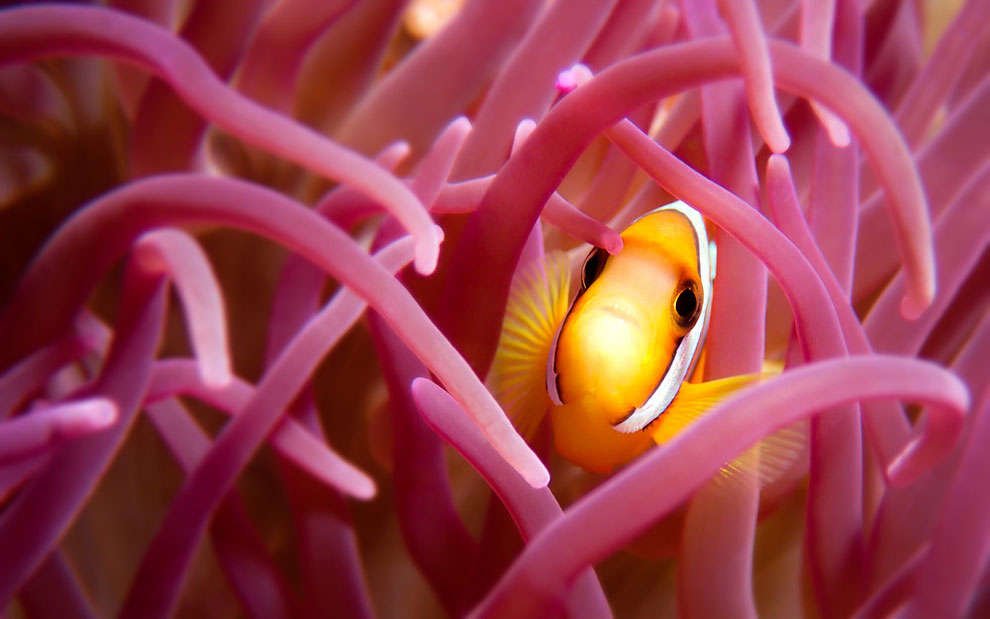 “Fragile Beauty”. In the reefs of Apo Island, an MPA off the coast of Dauin in the Philippines, lies a beautiful, vast stretch of corals, that illuminate in the glistening sunlight during a cloudless day. The coral reefs look like a beautiful metropolis full of wondrous varieties of luminous structures. Within the thousands of different species that take residence in this metropolis, one particular fish I came across during my dives caught my attention. The fragile nature of the juvenile Clark’s anemone fish, taking shelter in the anemone made me realise how delicate these beautiful fish are to human impacts. Photo location: Apo Island, Dauin, Philippines. (Photo and caption by Ben Bowes/National Geographic Photo Contest) 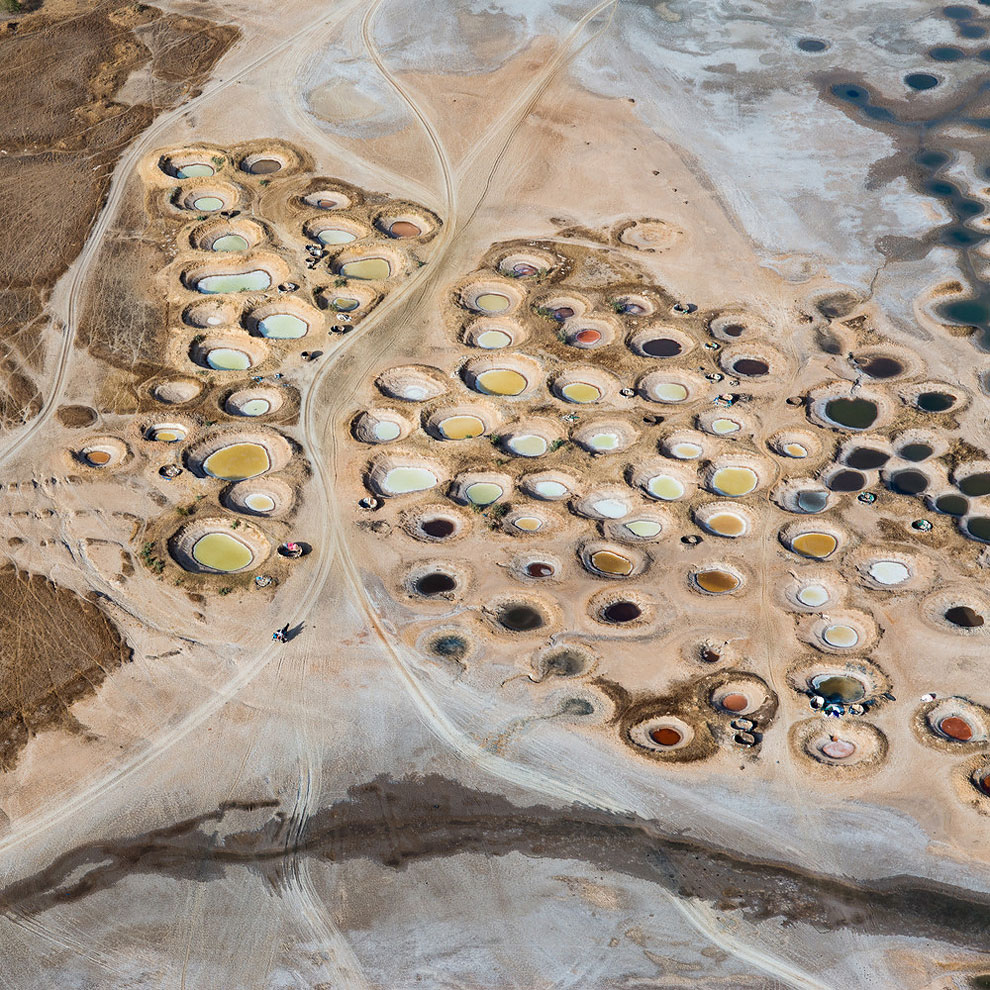 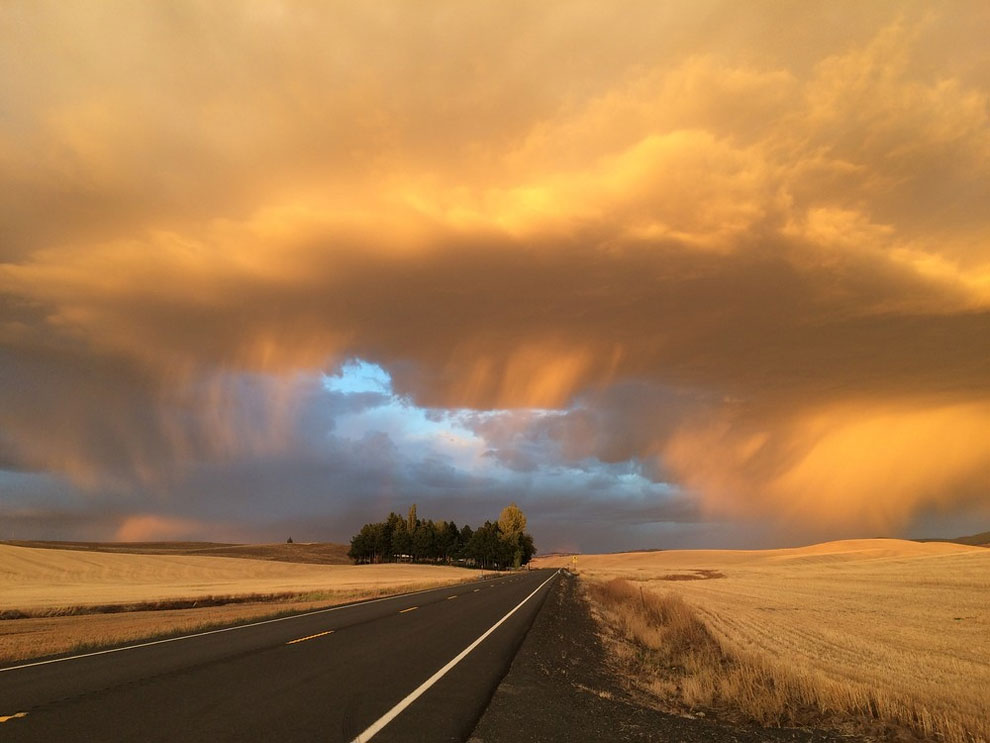 “Autumn Storm”. On my drive home from work I rounded the corner and found this amazing cloud formation during an autumn storm. This is snapped on the side of the road with my iPhone, no filters. Words cannot describe how beautiful it was to see, and the colors were amazing the way they contrasted with each other. Photo location: Pullman, Washington, United States. (Photo and caption by Amanda Beardslee/National Geographic Photo Contest) 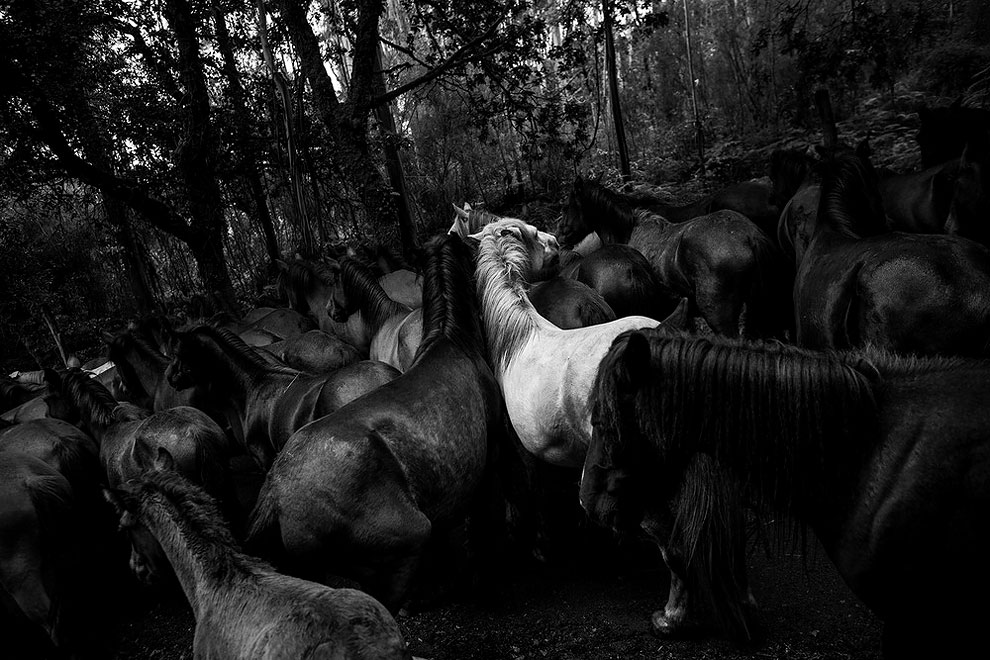 “The Wild Magic”. Throughout Galicia, in northern Spain, is fulfilled the annual ritual of cutting the tails of wild horses that live free in the mountains. But is in the village of Sabucedo that the tradition of “Rapa das Bestas” gains strength as international event with the attendance, every summer, of hundreds of fans and curious of this “magic party”. Photo location: Sabucedo, Galiza, Spain. (Photo and caption by Daniel Rodrigues/National Geographic Photo Contest) 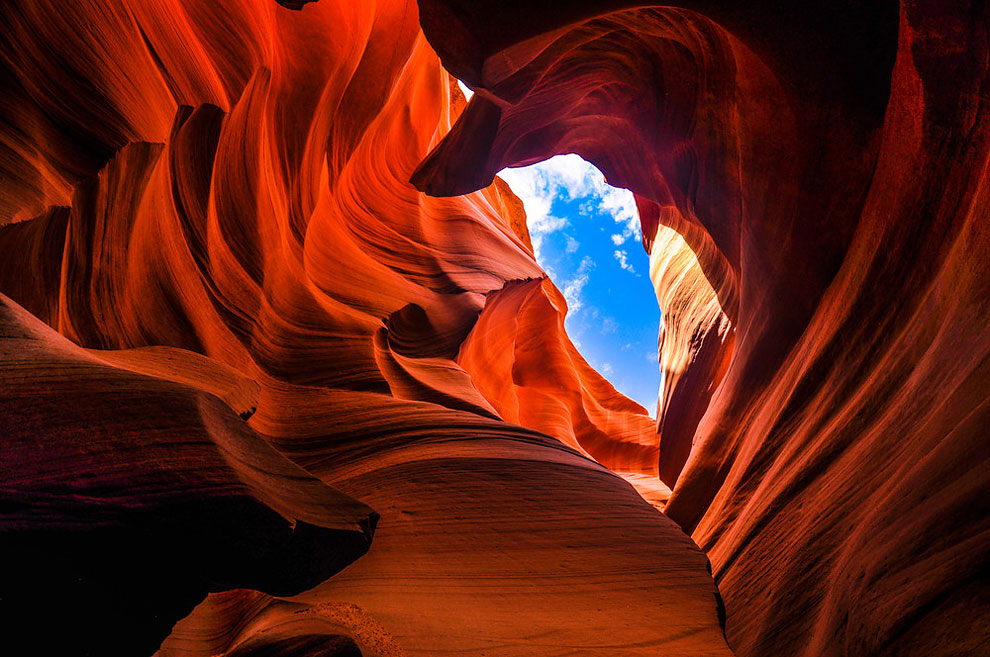 “Window to the heavens”. Shot of the Lower Antelope Canyons, in Page, AZ. Antelope Canyon is formed by erosion of the Navajo Sandstone, mostly due to Flash flooding. As this is an underground canyon, rainwater gushes into the canyons picking up speed and sand as it rushes into the narrow passageways. Over time the passageways eroded away, making the corridors deeper and smoothing hard edges in such a way as to form characteristic “flowing” shapes in the rock. The formations in the pic easily depicts the flow of the water. The whole canyons are filled with such beautiful formations. Photo location: Page, Arizona, USA. (Photo and caption by Rachna Niranjan/National Geographic Photo Contest) 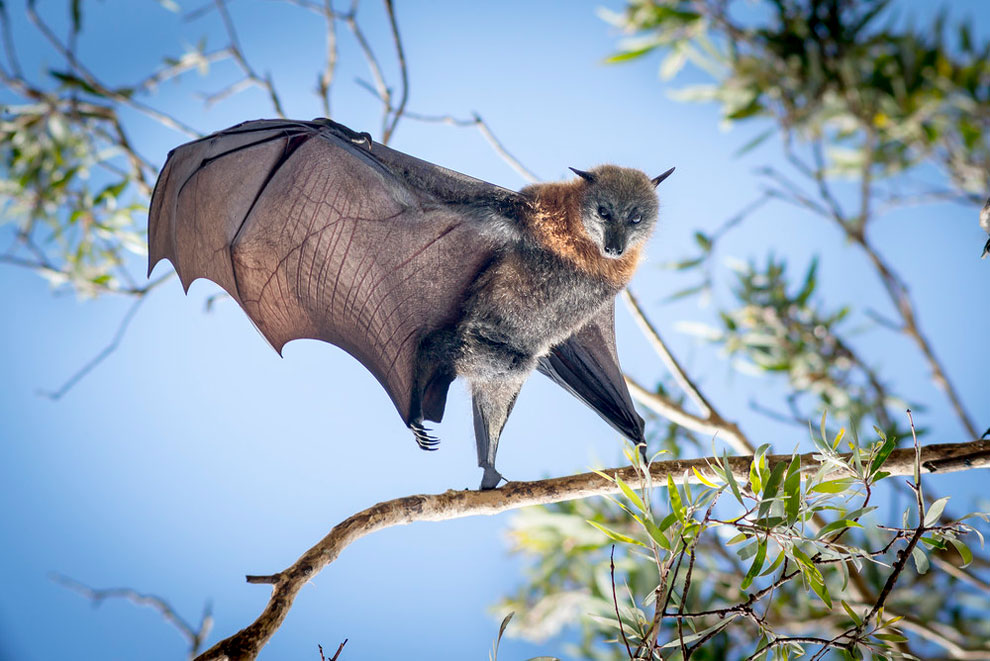 “Gravity”. Bats are a much maligned creature these days. They are responsible for the spread of emerging diseases such as Ebola, Hendra virus and Lyssavirus all of which are extremely deadly to humans. Scientists site the human encroachment into their habitat which allows for greater interaction between humans, domestic animals and the bats as a possible reason for the increase in infections. Photo location: Brisbane, Queensland, Australia. (Photo and caption by Karen Lunney/National Geographic Photo Contest) 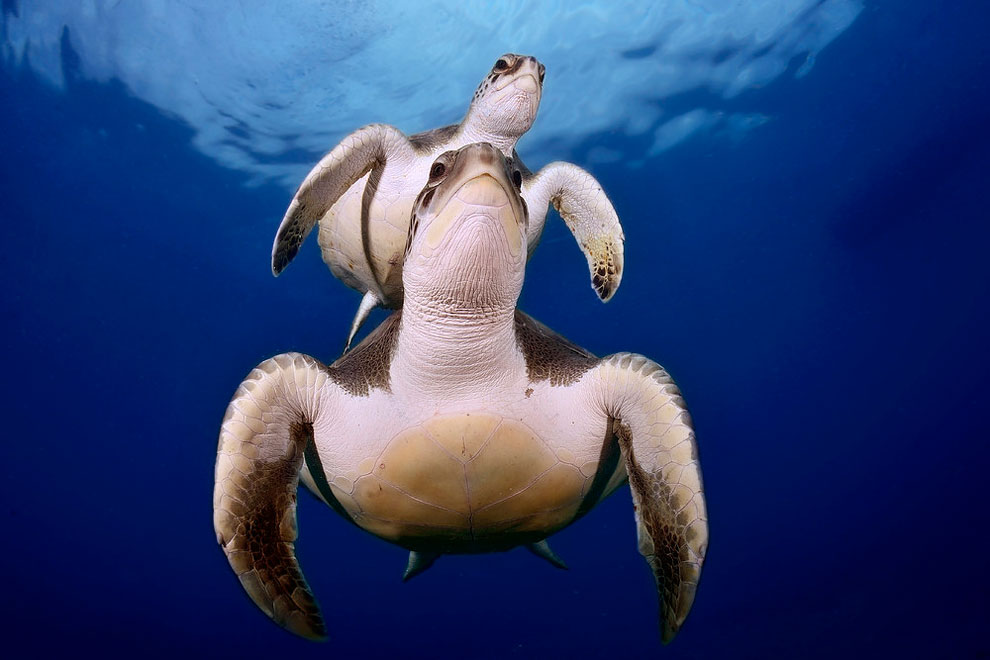 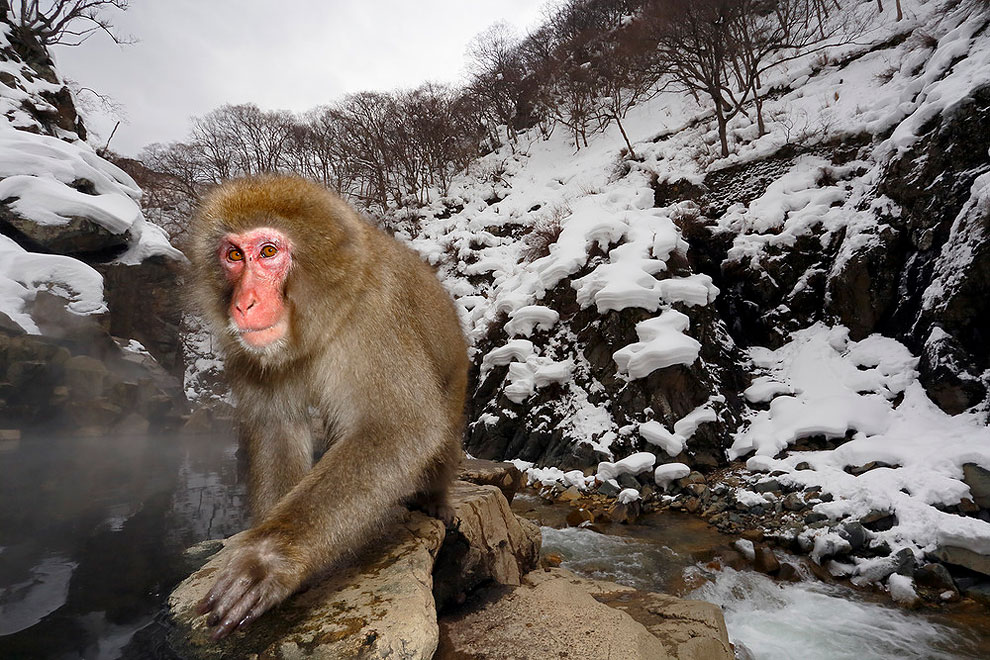 “Human Gaze”. Japanese macaques, commonly known as snow monkeys, are found in the wild only in Japan. They are also known as the snow monkey because they live in areas where snow covers the ground for months each year. They have a very human-like, naked, red face, and expressive eyes. Photo location: Jigokudani, Japan. (Photo and caption by Cristobal Serrano/National Geographic Photo Contest) 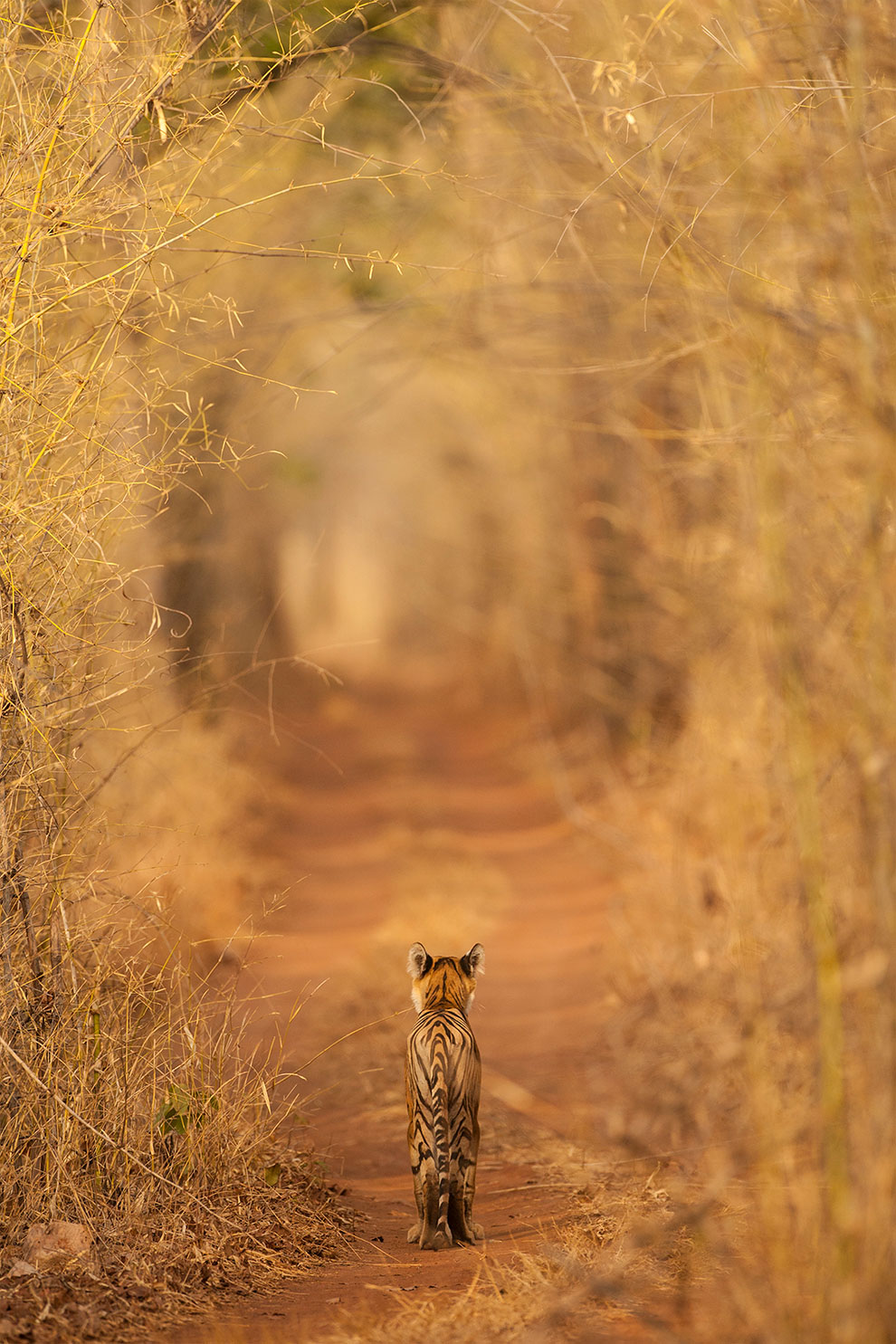 “Tiger in the Tunnel”. This sub-adult tiger was photographed at India’s Tadoba Andhari Tiger Reserve. Seeing the bamboo tunnel, I had envisaged this image. He was around a bend in the road and we could not even see him as we were the last jeep. As luck would have it he then got up and walked around, making us the first vehicle. He wandered all over the road and just for an instance paused in the middle of the road, which is when I took this image. Photo location: Tadoba Andhari Tiger Reserve. (Photo and caption by A. Apana/National Geographic Photo Contest) 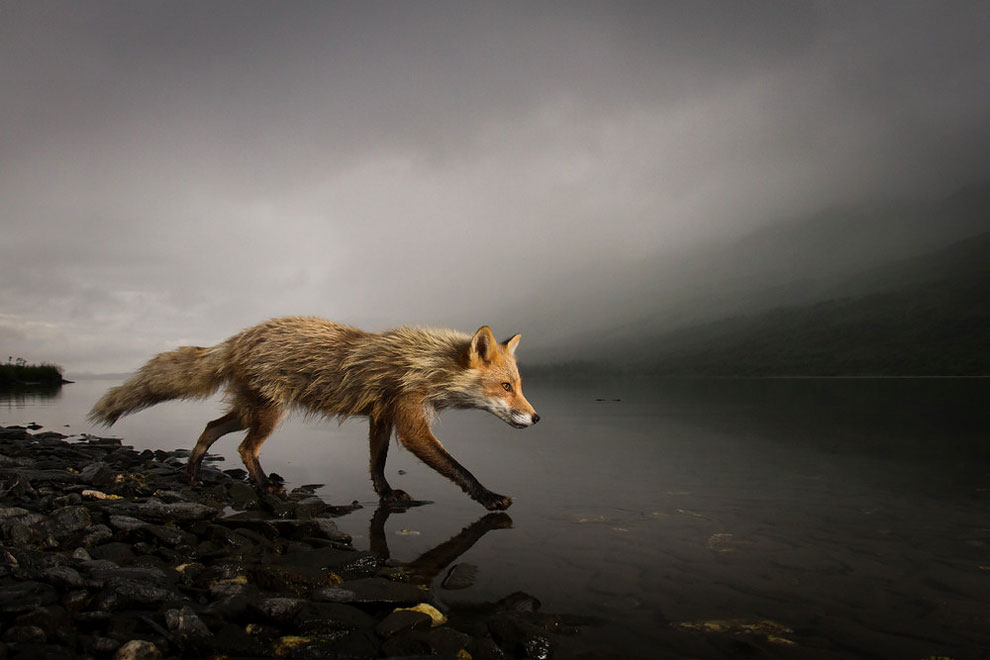 “Walking on water”. In remote parts of Alaska, foxes are often bold and unafraid of people. Last summer I was able to closely observe a young red fox, following close behind as she trotted through the brush searching for salmonberries, or waded the lake shore looking for fish carcasses. Once I even got to watch her taunt a grizzly bear as if she were playing a game of tag. As a storm came in one evening, I snuck outside hoping to take her portrait in dramatic light. I used a diffused light off-camera so that I could illuminate the fox while still capturing the dark mood of the storm. Photo location: Karluk Lake, Alaska, USA. (Photo and caption by Jonathan Armstrong/National Geographic Photo Contest)

Photo of the Day: Deadmau5
Wonderful Photos Of Postwar New York City In 1946 By Todd Webb
Mock Rock: When Actors Play Pop Stars
Zappa Claus: “Merry Christmas and Don’t Eat the Yellow Snow!”
China Fashion Week in Beijing
More Than 4,000 Photographs From The D-Day Invasion Of Normandy Are Now Available Online
"Last Rides": Photographer Takes Pictures Of The Roads Where Stars Died In Car Crashes
Someone Found An Old Photo Album Full Of Pics Of This Woman And Hollywood Celebrities In A Thrift Shop
Arnold Schwarzenegger Turns 69: Photo Tribute
The Superb Atmospheric And Poetic Black & White Photo Artworks Of Gabriel Guerrero Caroca
Elderly Couple Took the Same Photo Every Season but the Last One will Break Your Heart
Stunning Vintage Black-and-White Photos of Edwin Smith
Undertaker Couple Take Coffin-Themed Wedding Photos
A Photographer's Aerial Photos Of Parked Planes Show Just How Far The Airline Industry Has Fallen During The Lockdown
Photographer Michael Salisbury Visualizes Chicago As An Abandoned City
Photo of the Day: Baby Fish
Someone Is Showing That All Instagram Photos Are Starting To Look The Same And It’s Pretty Freaky
The Daredevil Female Photographer Who Lowers Herself Into Active Volcanoes
Photographer David Stewart Turns His Lens On The Faceless World Of Paid Content And The Dehumanisation Of Corporate Globalization
"To See Paris And Die": These Photos Compare Paris And Its Detailed Chinese Replica
"The Redemption": Artist Tawny Chatmon Celebrates The Beauty Of Black Hair Through Striking Portraits
New Wave Downtown Fashion by Edo Bertoglio
Rainy Saint Petersburg In Photographic Artworks By Eduard Gordeev
Bowie Fans Outside a David Bowie Concert, Including a Young Sid Vicious, at Earls Court, London, 1973
contest, geographic, national, photo