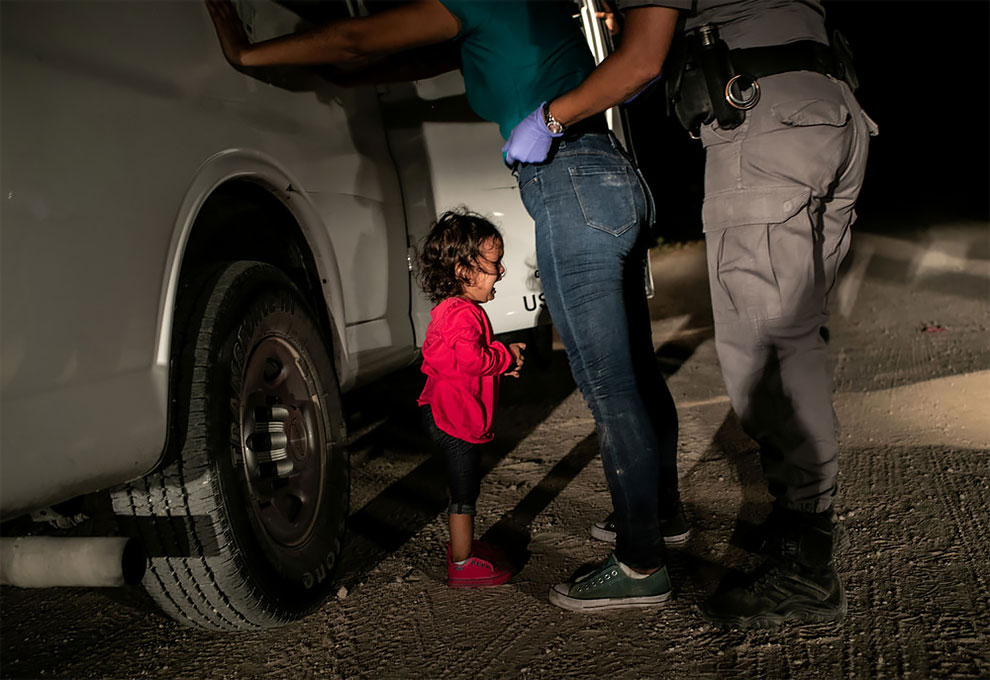 The winner: crying girl on the border, by John Moore. Yanela, from Honduras, cries as her mother, Sandra Sanchez, is searched by a US border patrol agent, in McAllen, Texas, US. This image was also nominated in the “spot news” category. (Photo by John Moore/Getty Images/World Press Photo 2019) 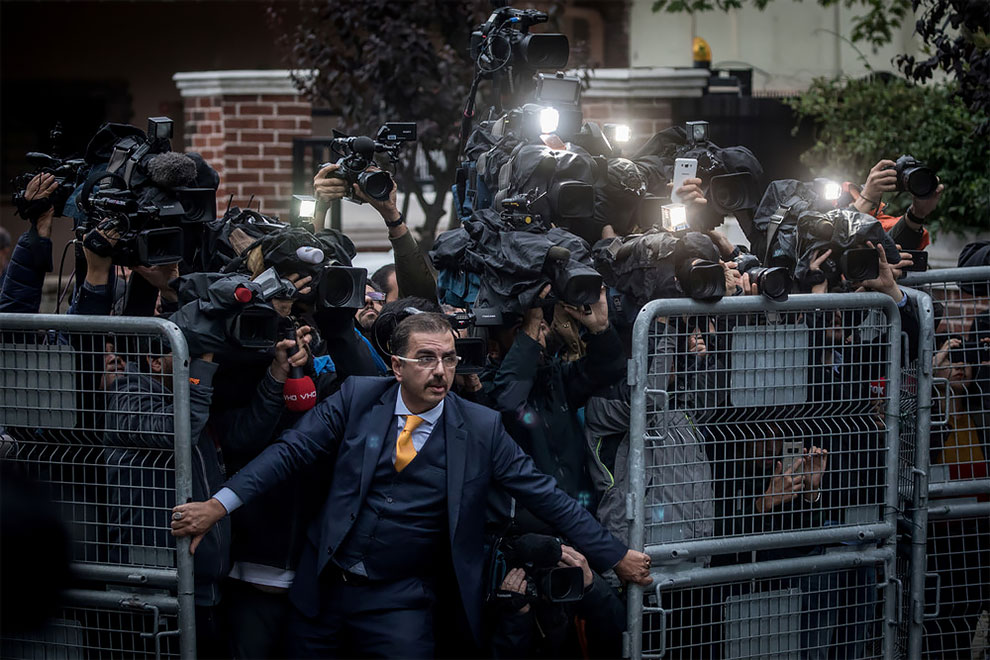 General news, singles winner: the disappearance of Jamal Kashoggi, by Chris McGrath. An unidentified man tries to hold back the press as Saudi investigators arrive at the Saudi Arabian consulate in Istanbul, Turkey, amid a growing international backlash against the murder of the journalist Jamal Khashoggi. (Photo by Chris McGrath/Getty Images/World Press Photo 2019) 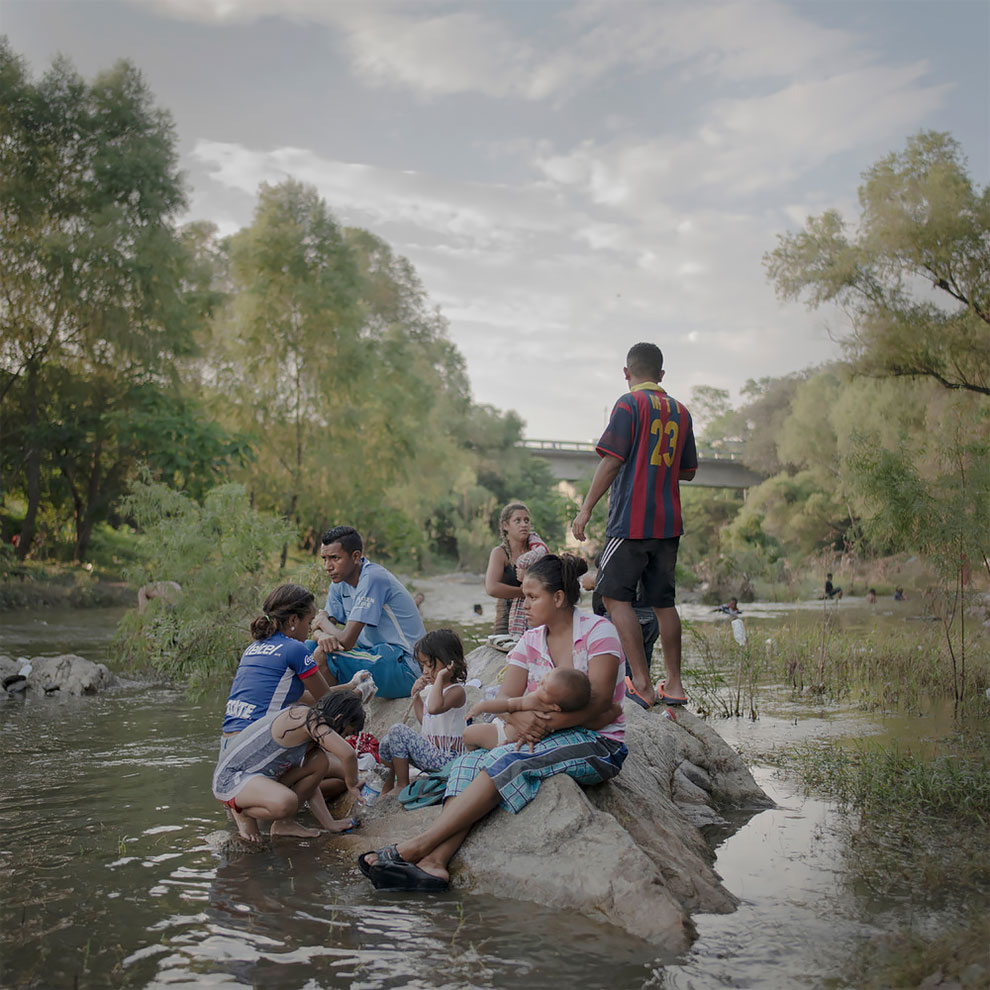 Photo story of the year, winner: The Migrant Caravan. During October and November 2018, thousands of Central American migrants joined a caravan heading to the US border. The caravan, assembled through a grassroots social media campaign, left San Pedro Sula, Honduras, on 12 October 2018, and as word spread drew people from Nicaragua, El Salvador and Guatemala. (Photo by Pieter Ten Hoopen/Agence VU/Civilian Act/World Press Photo 2019) 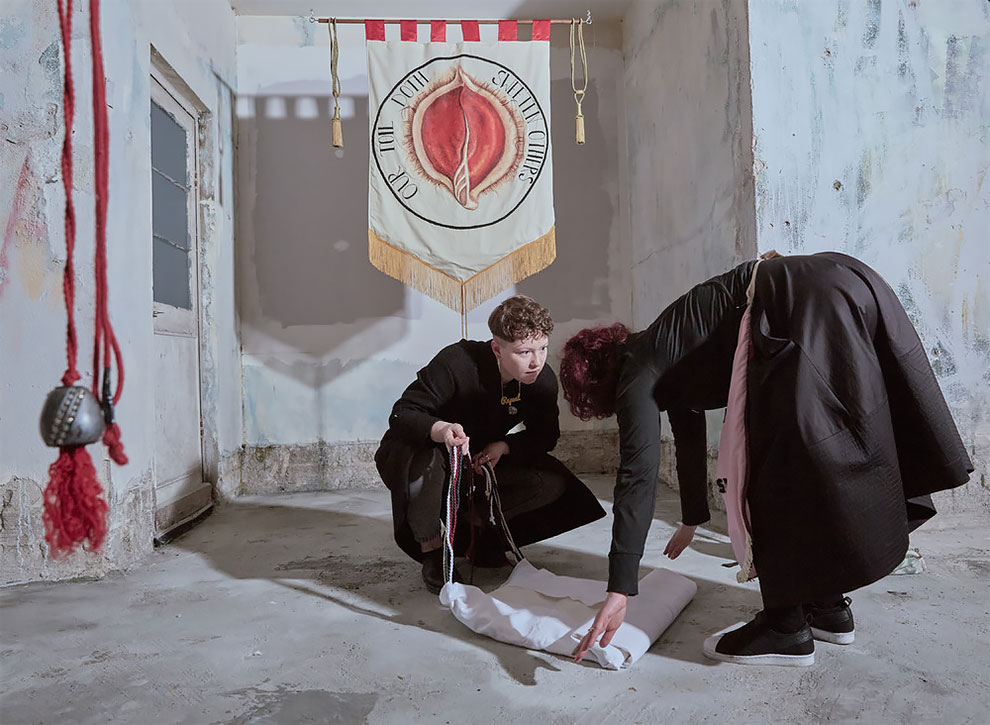 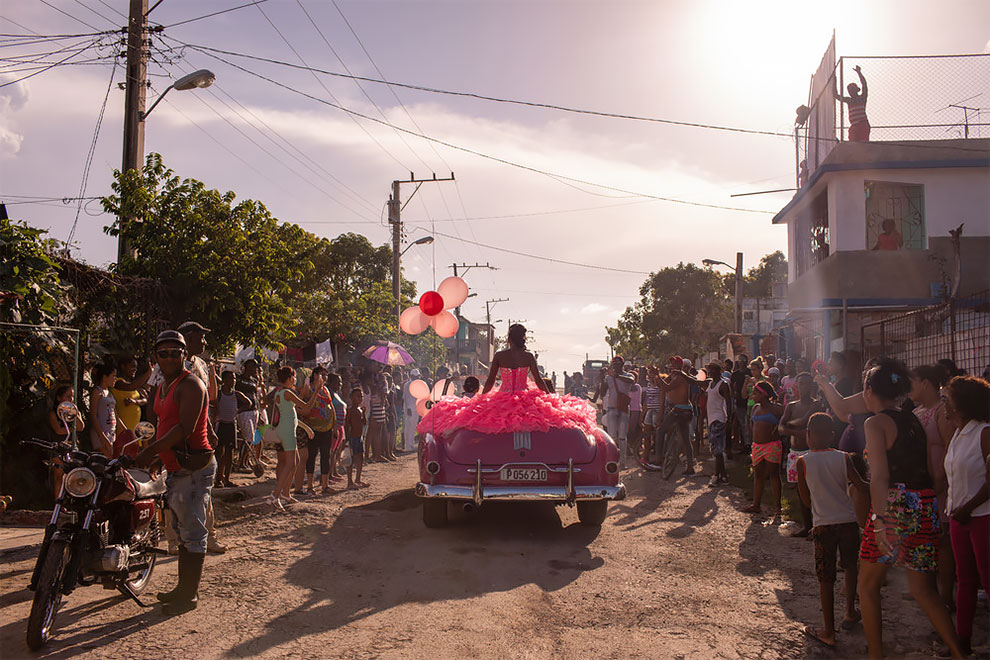 Contemporary issues, singles winner: The Cubanitas, by Diana Markosian. Pura rides around her neighbourhood in a pink 1950s convertible, as the community gathers to celebrate her 15th birthday, in Havana, Cuba. (Photo by Diana Markosian/Magnum Photos/World Press Photo 2019) 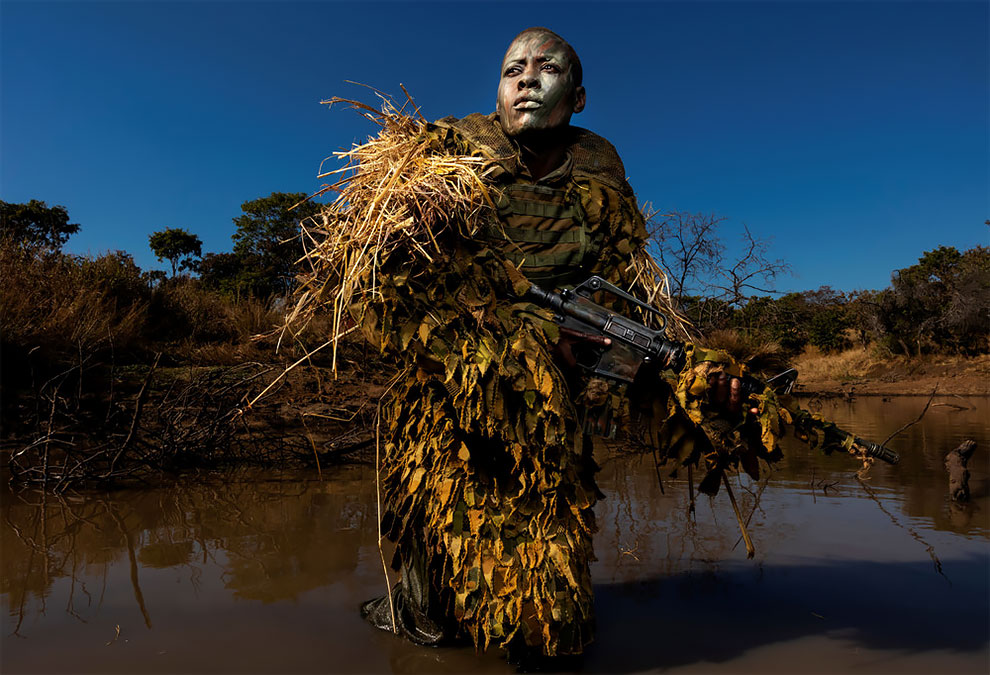 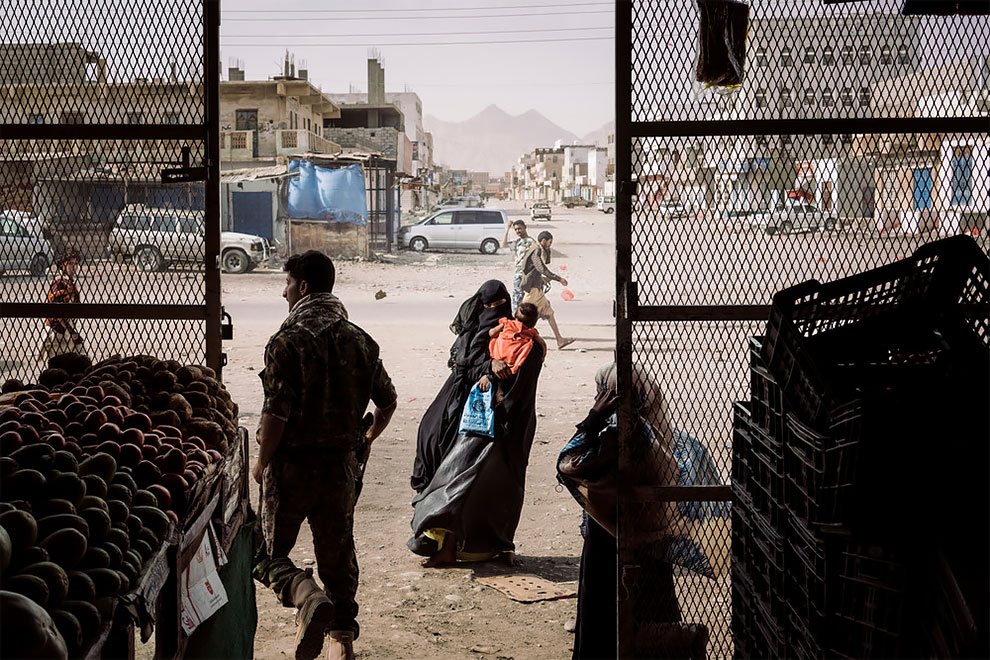 General news, stories winner: Yemen crisis, by Lorenzo Tugnoli. A veiled woman begs outside a grocery store in the village of Azzan, Yemen, which was under the control of al-Qaida until the Shabwani elite forces liberated the area in December 2017. Over the past year, the shadow war between al-Qaida and local Yemeni fighters has intensified. (Photo by Lorenzo Tugnoli/The Washington Post/Contrasto/World Press Photo 2019) 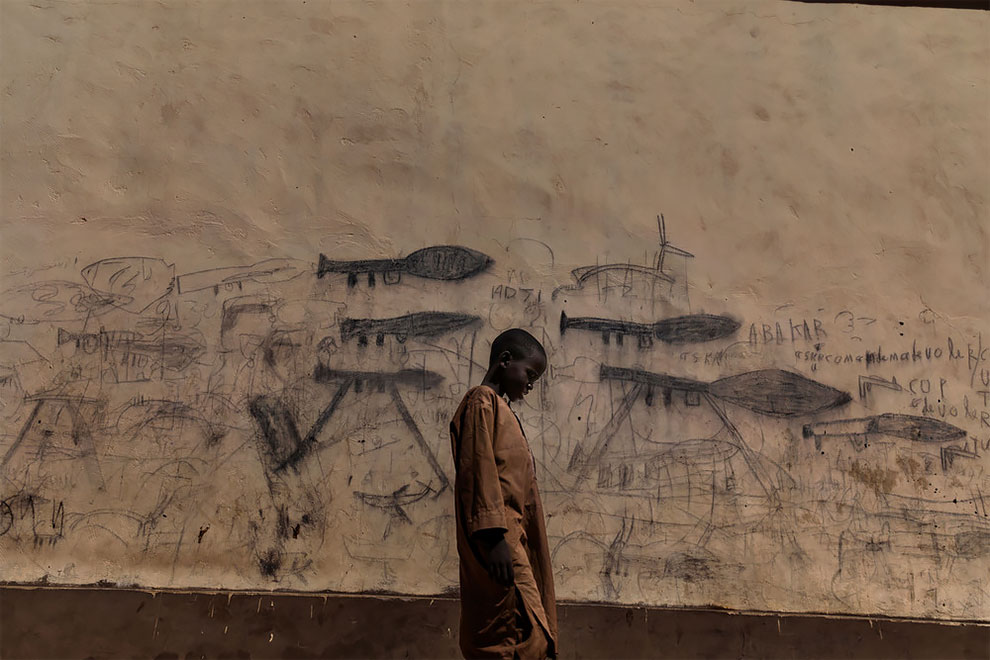 Environment, stories winner: Almajiri Boy, by Marco Gualazzini. An orphaned boy walks past drawings on a wall depicting rocket-propelled grenade launchers, in Bol, Chad. This image was also nominated as part of a set in the “photo story of the year” and “environment story” categories. (Photo by Marco Gualazzini/Contrasto/World Press Photo 2019) 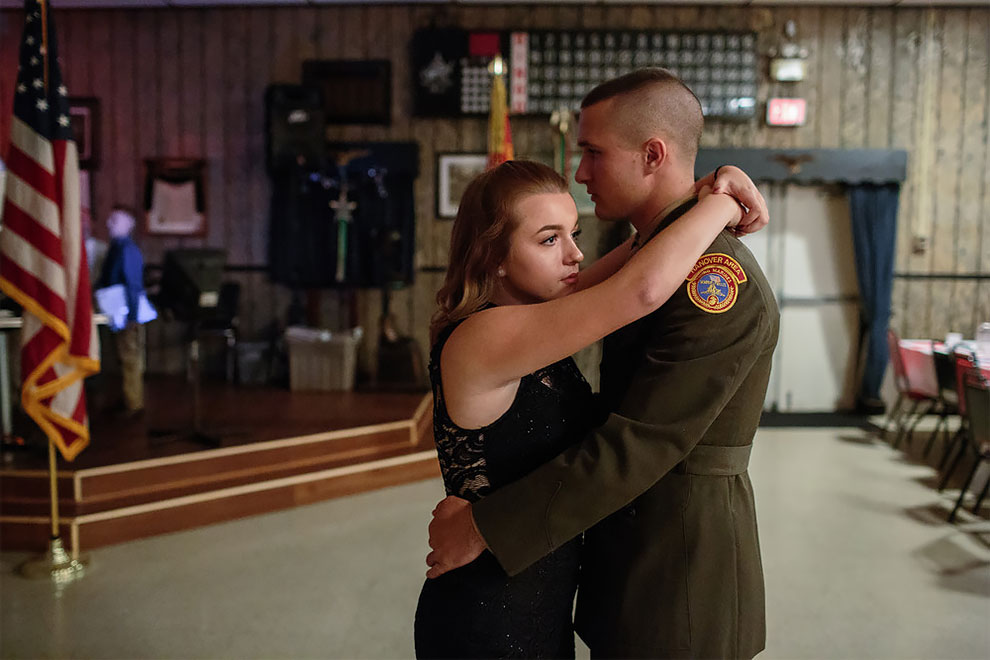 Long-term projects, winner: Garett, an upper ranking Young Marine, dances with his girlfriend at an annual ball in Hanover, Pennsylvania. Students from the programme, along with family and close friends, meet for an evening to honour cadets and their accomplishments. The evening begins with dinner and speeches, and ends with a dance. (Photo by Sarah Blesener/Redux/World Press Photo 2019) 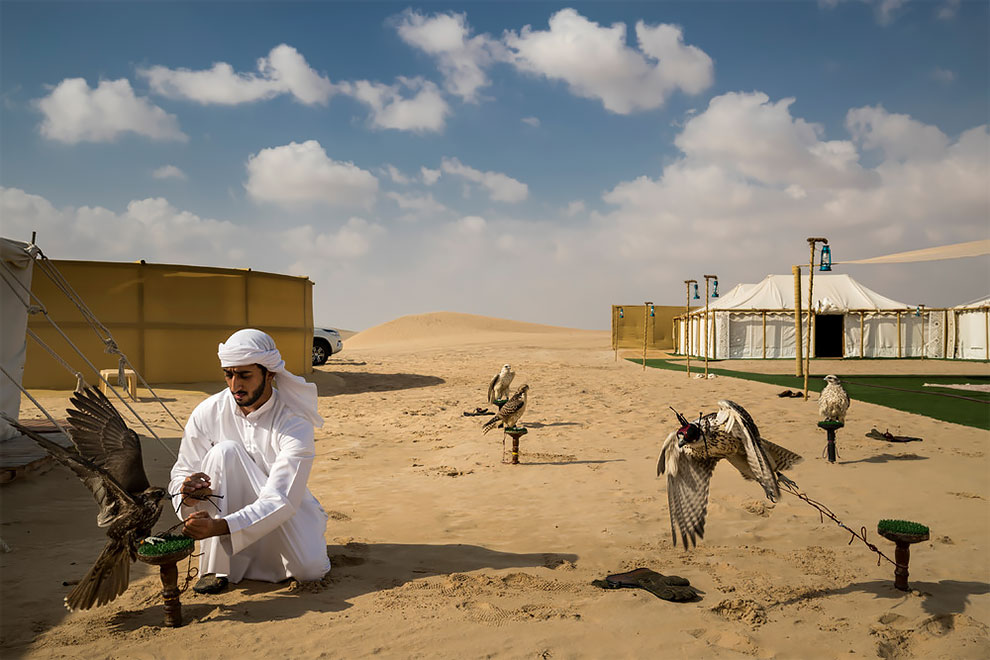 Nature, stories winner: A falcon hunting camp in the desert outside Abu Dhabi, UAE. This camp uses captive-bred Houbara bustards, the preferred prey species of Arab falconers across the region. In the UAE, where a huge amount has changed over the last 60 years, falconry is seen as a link back to the past and to the ancient culture of the Bedouin. (Photo by Brent Stirton/Getty Images/National Geographic/World Press Photo 2019) 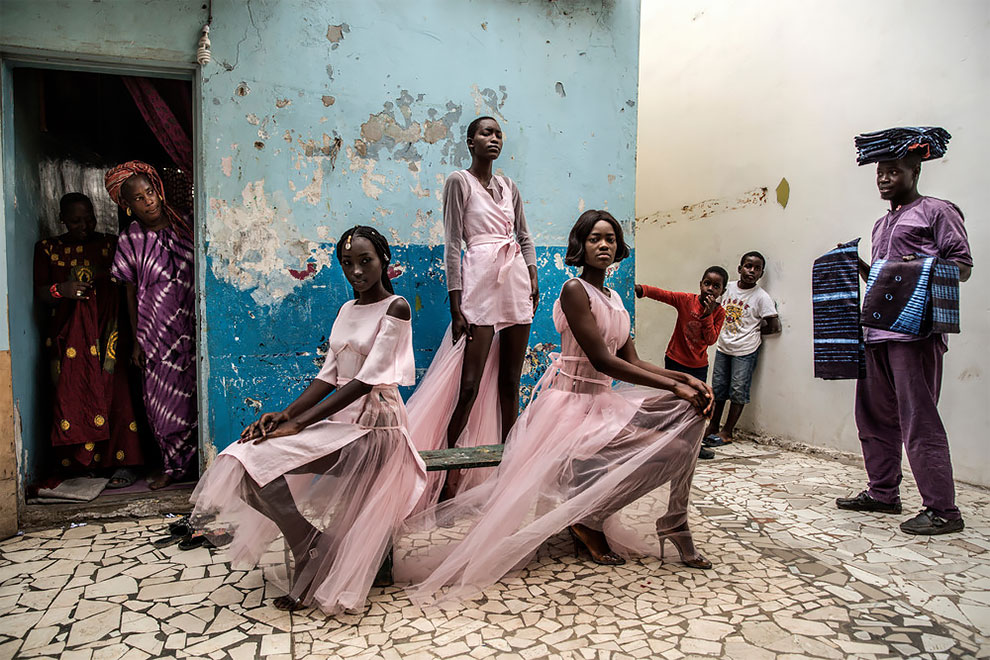 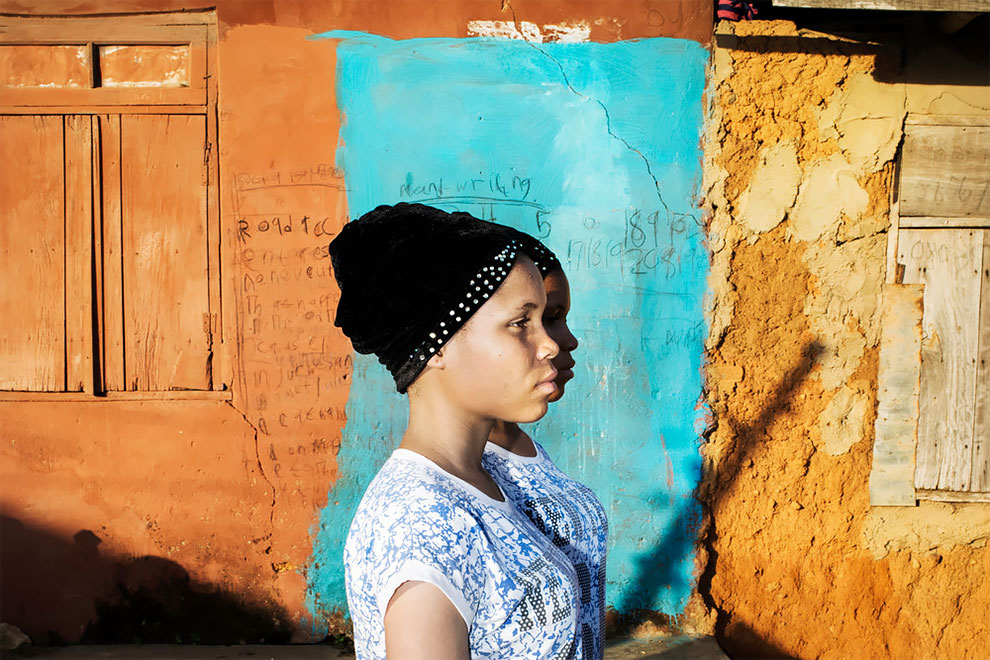 Portraits, stories winner: A collaborative project about the mythology of twinhood and how paradoxical beliefs regarding twins manifest in Nigeria. West Africa has more twins than any other region in the world. Communities have developed cultural practices in response, from veneration to demonisation. In some areas the twin spirit is worshipped and celebrated. In others, twins are vilified, persecuted and killed for their perceived role in bringing bad luck. (Photo by Benedicte Kurzen & Sanne de Wilde/Noor/World Press Photo 2019) 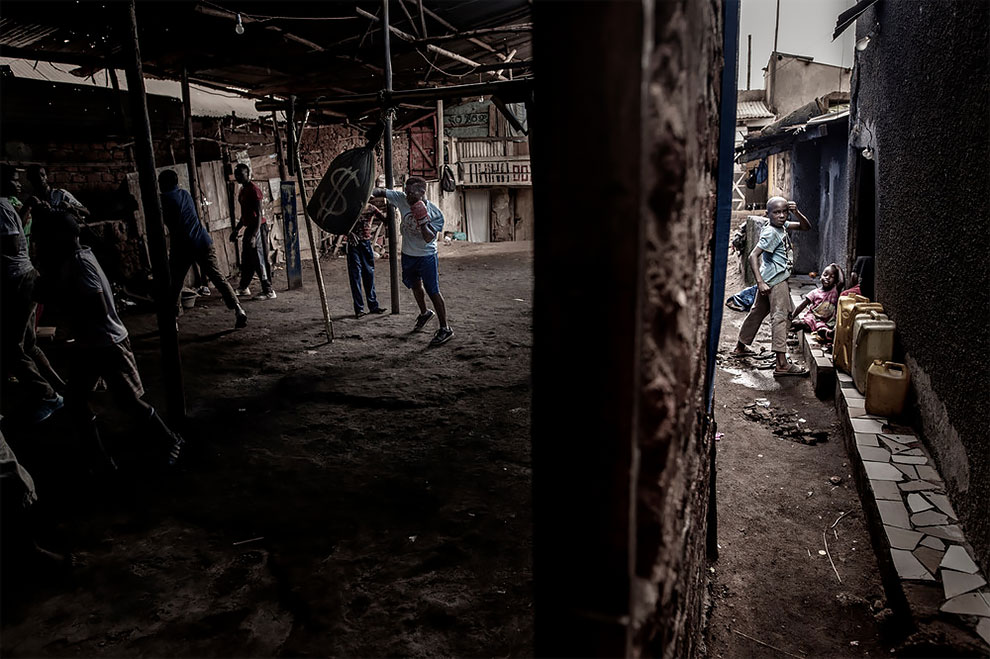 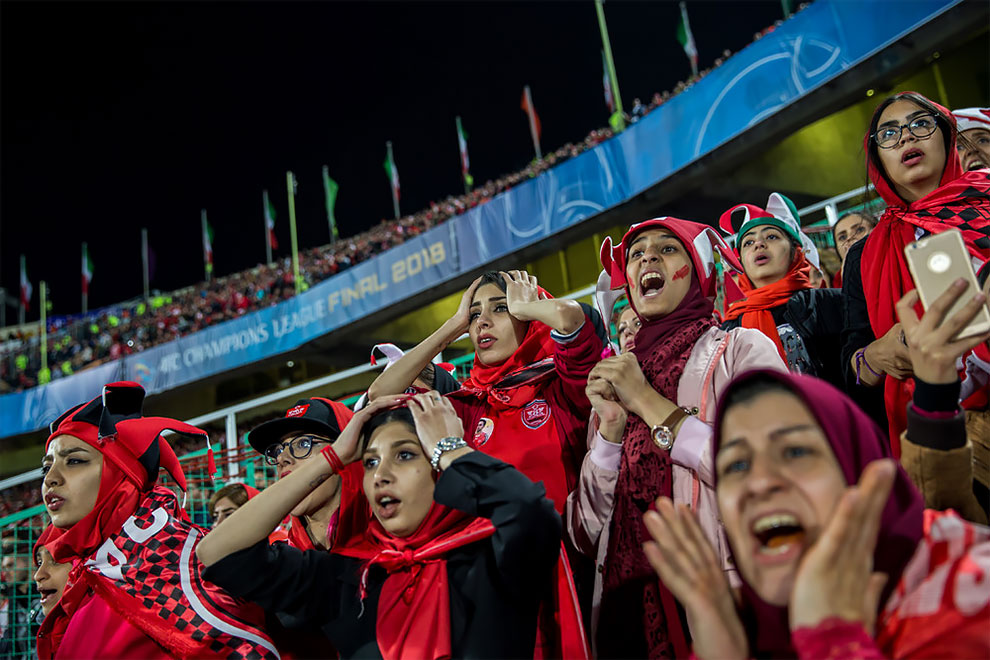 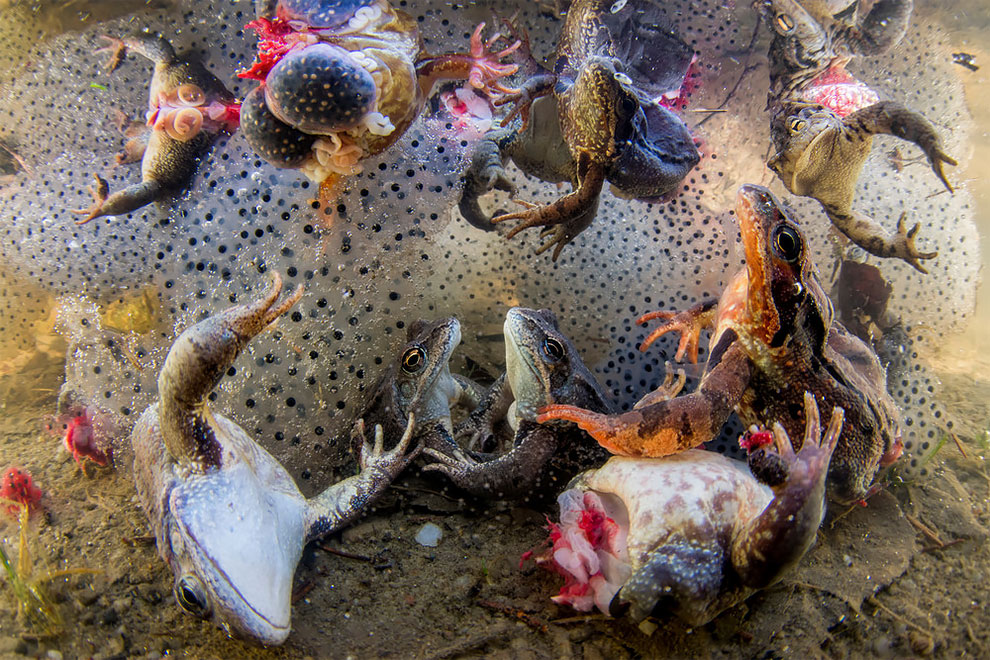 Nature, singles winner: Frogs with their legs severed struggle to the surface, surrounded by frogspawn, after being thrown back into the water in Covasna, Romania. (Photo by Bence Mate/World Press Photo 2019) 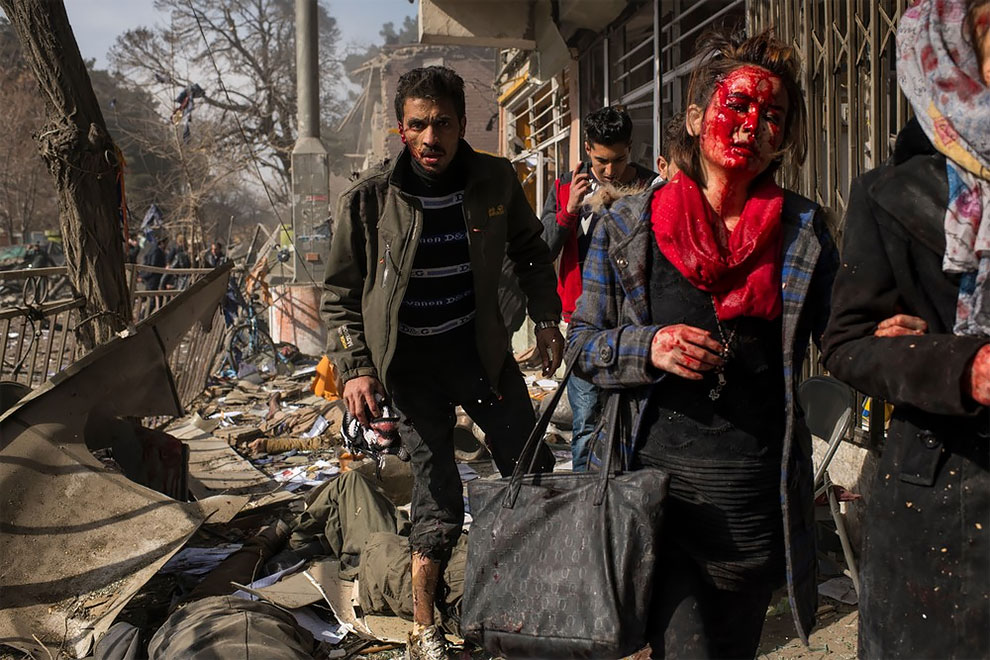 This incredible picture of a woman covered in blood in Kabul was one of the star entries at the photographic awards. (Photo by Andrew Quilty/World Press Photo 2019) 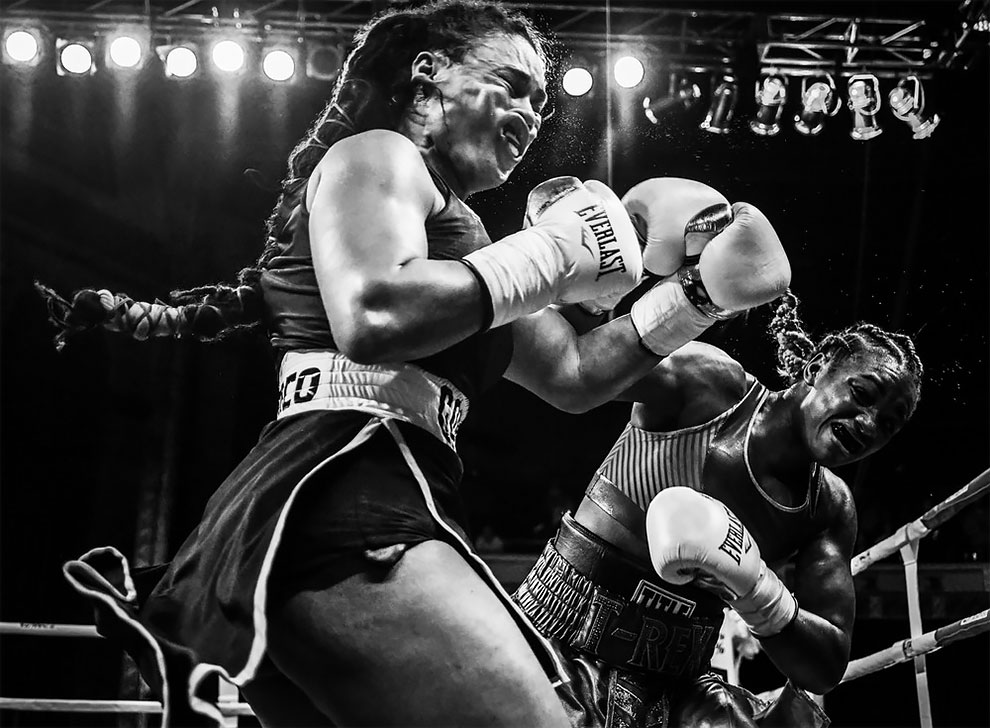 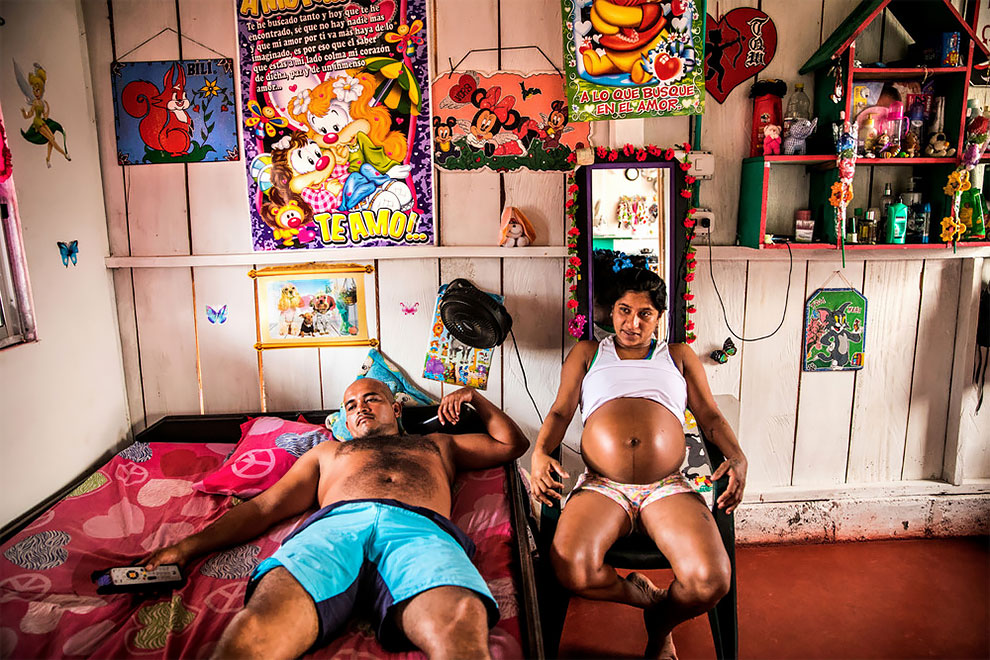 Being pregnant after Farc child-bearing ban, by Catalina Martin-Chico. Yorladis is pregnant for the sixth time, after five other pregnancies were terminated during her Farc years in Colombia. She says she managed to hide the fifth pregnancy from her commander until the sixth month by wearing loose clothes. Yorladis and her partner live in a house in a temporary camp in Colinas. (Photo by Catalina Martin-Chico/Panos/World Press Photo 2019) 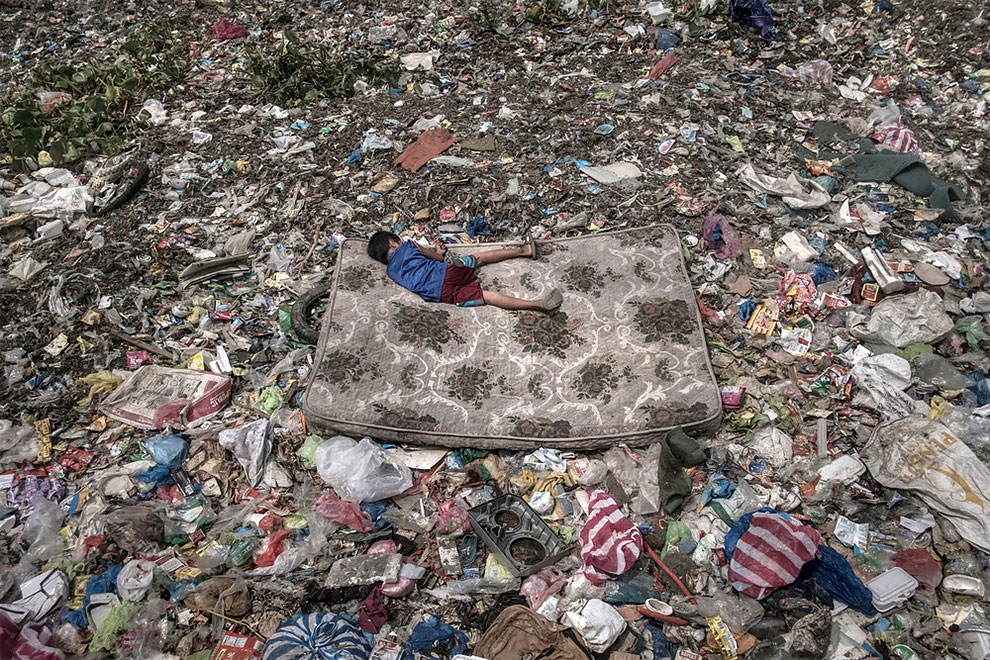 A child lying on a mattress surrounded by a garbage patch floating on the Pasig River in Manila, Philippines. (Photo by Mario Cruz/World Press Photo 2019) 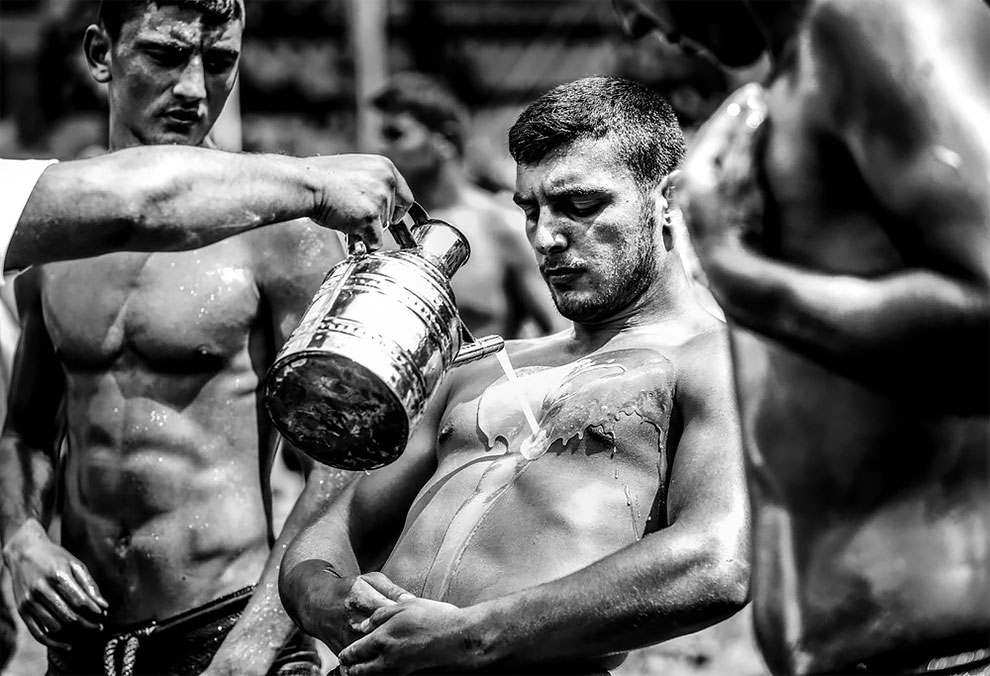 Wrestlers grease up before a match at the Kirkpinar Oil Wrestling Festival, in Sarayiçi, Turkey. (Photo by Elif Ozturk/Anadolu Agency/World Press Photo 2019) 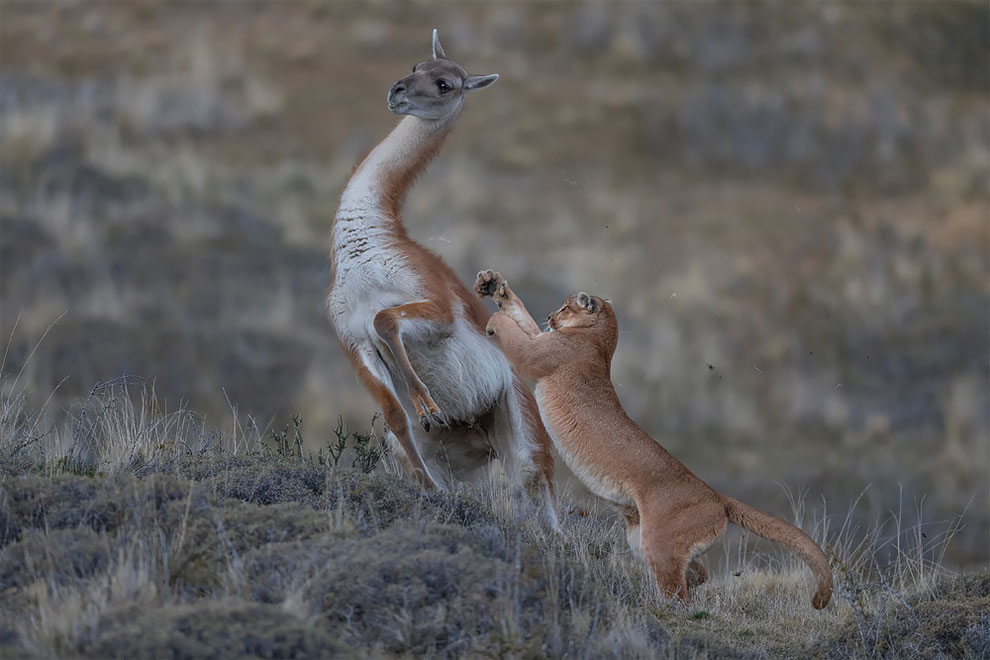 The moment a puma tries to take down a full-grown female llama on the Torres del Paine, Chile. (Photo by Ingo Arndt/National Geographic/World Press Photo 2019) 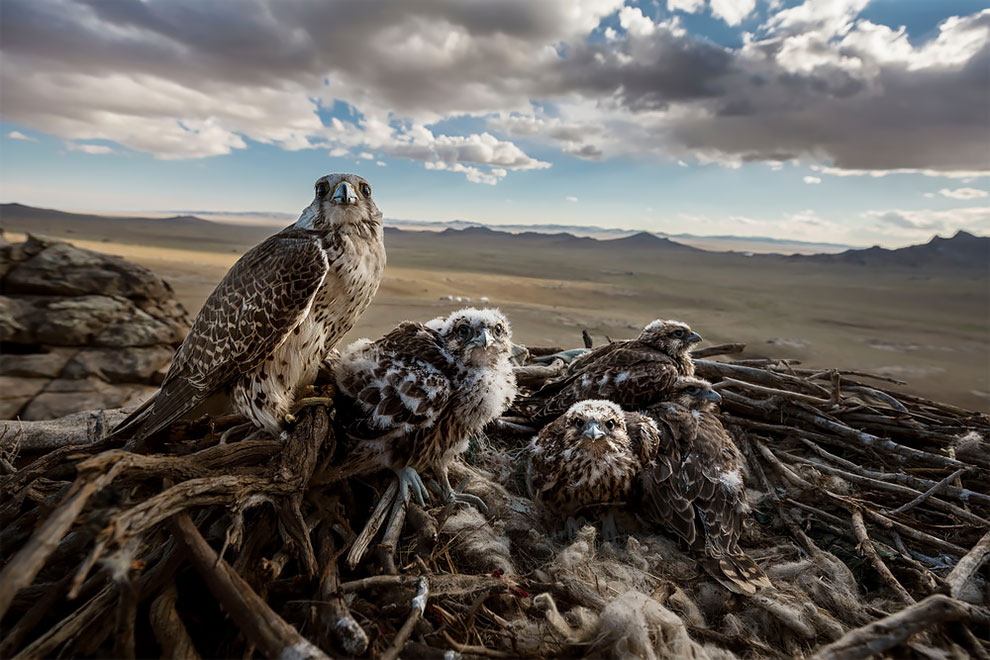 A wild Saker Falcon mother and her chicks high over the steppe of Central Mongolia. (Photo by Brent Stirton/Getty Images for National Geographic/World Press Photo 2019) 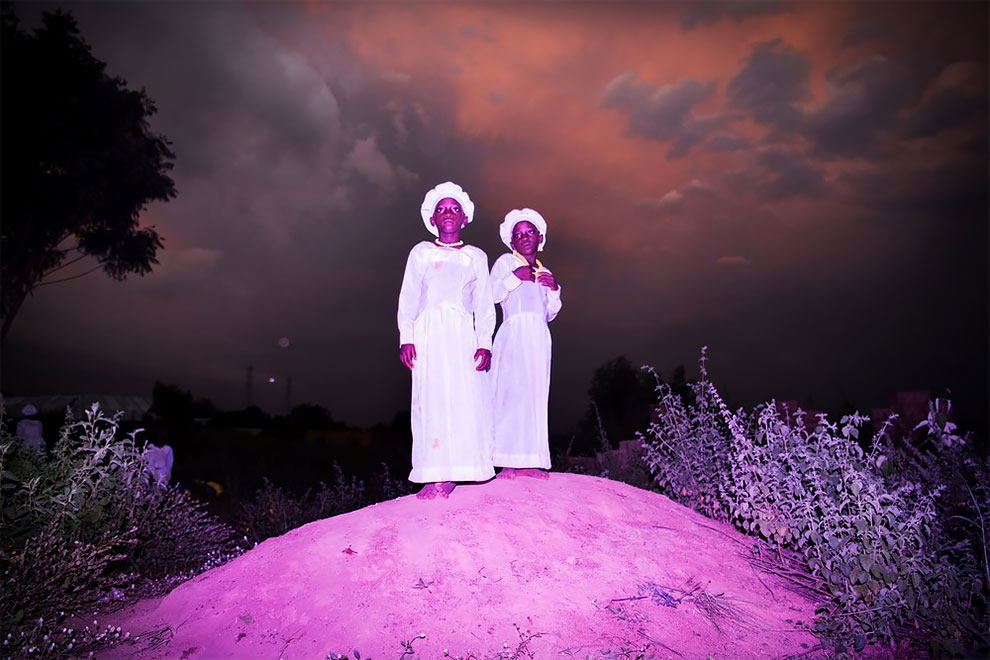 Two women stand on a mound before a church service in Igbo-Ora, Nigeria. (Photo by Bénédicte Kurzen/Noor and Sanne de Wilde/World Press Photo 2019) 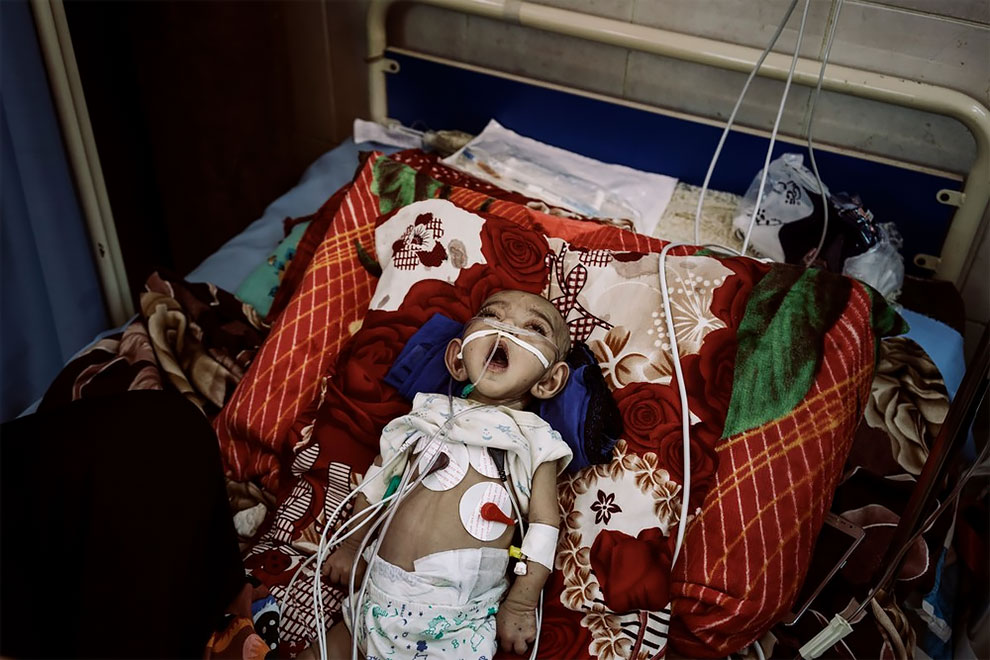 A young child gasps for air in the Intensive Care Unit of the al-Sadaqa Hospital, in Yemen. (Photo by Lorenzo Tugnoli/The Washington Post/Contrasto/World Press Photo 2019) 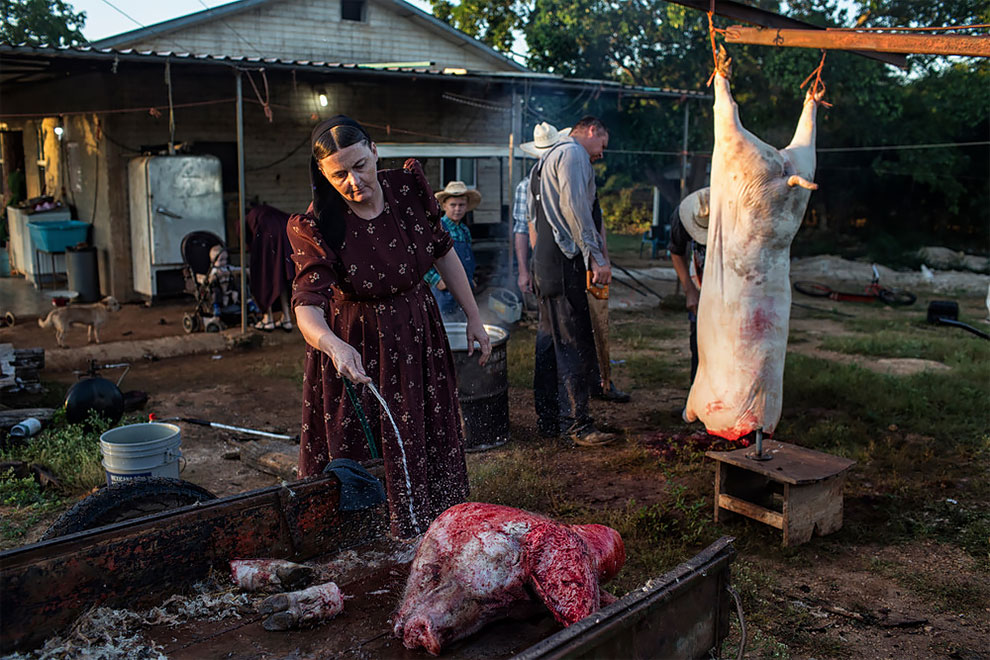 A family slaughter a pig at a Mennonite camp in Mexico to mark the arrival of the “small moon”. (Photo by Nadia Shira Cohen/World Press Photo 2019) 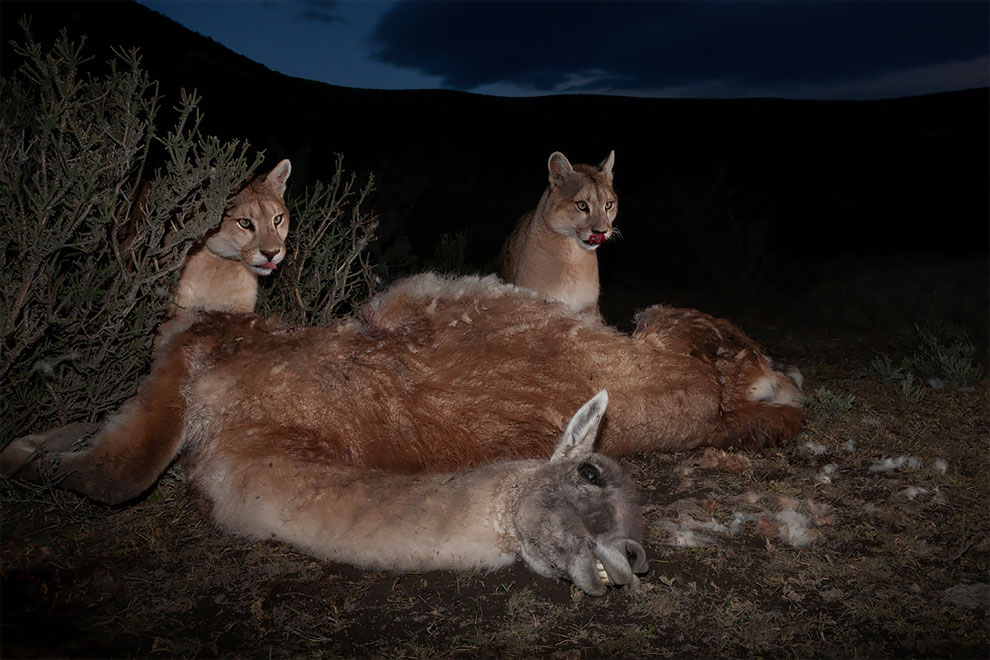 Photographer Mirko Nahmijas Reveals The 'Star Wars' Architecture Of Soviet Belgrade
Photo of the Day: Convoy of Hope
Photographer Spent Two Weeks In Iceland To Shoot The Recent Fagradalsfjall Eruption
Amazing Vintage Photographs of Linemen on Utility Poles at the Turn of 20th Century
How to Cook DIY Sous-vide Steak
13 Inspiring Winning Photos Of The 2021 International Photography Awards
The World's Most Expensive Parking Lot is in the Middle of the Ocean
Woman Posed For An Epic Divorce Photo Shoot To Let Go Of The Past And Start Fresh
Spectacular Winning Images from The Wildlife Photographer of The Year 2020
Manchester Girls: Photographs That Celebrate Northern Women, Their Strength And Their Style
2014 National Geographic Photo Contest, Week 1
New York Through the Eyes of a Road Bicycle
"Metamorphosis of Self": Photographer Erika Zolli Creates Surrreal Representations of Herself
Femme Fatales: Mug Shots Of Female Criminals From Early 20th Century Australia
Meet Elena Deligioz, Probably The Most Beautiful Female Cosplay Soldier In The World
36 Years of China's “One Child” Policy
The Egg Driver
Photographer Zohaib Anjum Took Stunning Shots Of Some Of The World's Most Luxurious High-Rise Apartments
Gorgeous Fashion And Beauty Photography By Ellen Simone
Reuters Pictures of the Year 2014, Part 6
A Camera Made of 23,248 Coffee Stirrers, Powered by A Raspberry Pi, and Controlled with A Nintendo Controller
Daredevil Photographer Attaches LED To Drone For Hauntingly Beautiful Photos
Vibrant Photos Capture Spirit Of 1980s New York City
"Sometimes Blue and Cold, Sometimes Hot and Intense"
Night And Day: Striking Street Photography In Japan By James Takumi Shyegun
Landmannalaugar, a National Park of Iceland
Mass of Energy as More than 300 Albert Einstein Lookalikes Celebrate His Genius
Early Versions Of Famous Characters
Rihanna for Harper’s Bazaar US, August 2012
Shocking Photographs Of People Lying In 7 Days Worth Of Their Trash
contest, photo, press, winners, world