“The 600-pound English Charolais calf known as Hero became what may be the nation’s only double-amputee calf with prosthetics on Wednesday when fitted for a new pair of high-tech devices attached to its back legs. It’s the latest step in a year-long effort that has taken Hero’s caretaker, Kitty Martin and the animal from Virginia, where she rescued it last year from an Augusta County farm where it succumbed to frostbite that claimed its hooves, to Texas. Animal surgeons at Texas A&M University treated Hero for several months and affixed the initial prosthetics that the calf now had outgrown.

“This is our first cow”, Erin O’Brien, an orthotist and prosthetist for Hanger Inc., an Austin-based national firm that makes prosthetic limbs. She was among a team of about eight people working on the project for about two weeks. “We did a lot of study of photos and video of cows just regular walking to see what it looks like and see if we can mimic that biomechanically”, O’Brien said. “It’s unusual, yes, but an opportunity”.

Martin figures she has spent nearly $40,000 to save the calf. “I don’t know how to explain it”, she said. “I’m an animal rescuer. And he had everything against him”. Hero’s hooves are custom made of urethane and titanium, the connecting components are titanium and carbon fiber and the sockets that attach to his legs are carbon fiber and acrylic resin. Martin and O’Brien declined to discuss the cost, but estimated that similar devices for humans go for between $4,000 and $8,000 apiece.

Martin, 53, a former veterinary technician and retired truck driver originally from Dalhart, in the Texas Panhandle, is moving with her husband from Greenville, Virginia, to Cameron in Central Texas. She’s hoping Hero, who could grow to 1,500 pounds, can be a therapy animal for wounded veterans and special needs children. “It makes my day”, Martin said. “He’s got a very bright future right now”. – Associated Press 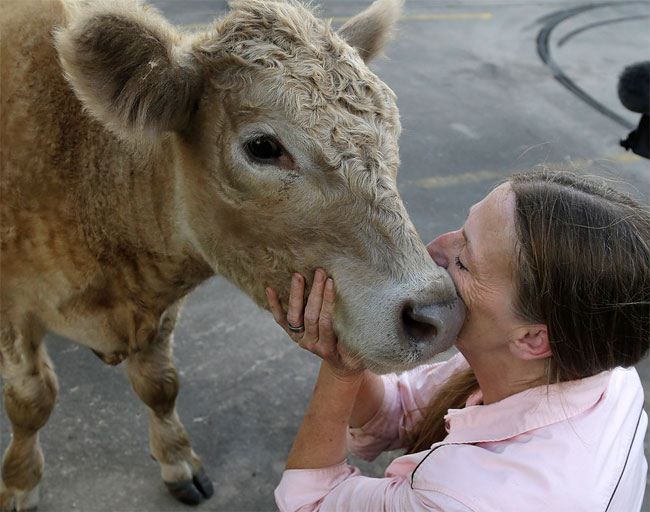 Kitty Martin, right, snuggles Hero after he was fitted with new prosthetic legs Wednesday, May 21, 2014, in Houston. Martin rescued the abandoned calf from a Virginia farm a year ago, brought him to Texas and got him permanent prosthetics to replace back hooves that had to be amputated because of frostbite. (Photo by Pat Sullivan/AP Photo) 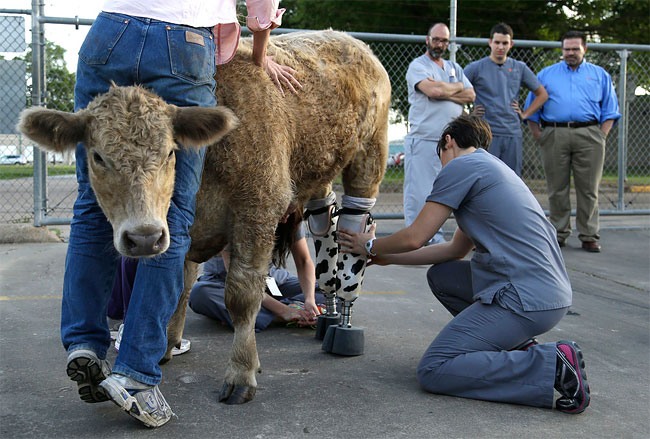 Hero is fitted with new prosthetic legs Wednesday, May 21, 2014, in Houston. (Photo by Pat Sullivan/AP Photo) 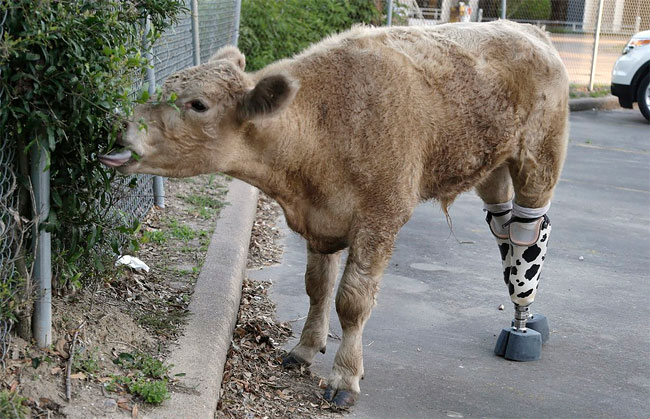 Wearing his new prosthetic legs Hero gets a taste of shrubbery Wednesday, May 21, 2014, in Houston. The abandoned calf rescued from a Virginia farm a year ago and brought to Texas after it nearly died is getting permanent prosthetics to replace back hooves that had to be amputated because of frostbite. (Photo by Pat Sullivan/AP Photo)