This Dog Has A Wheelchair Made Out Of Children’s Toys 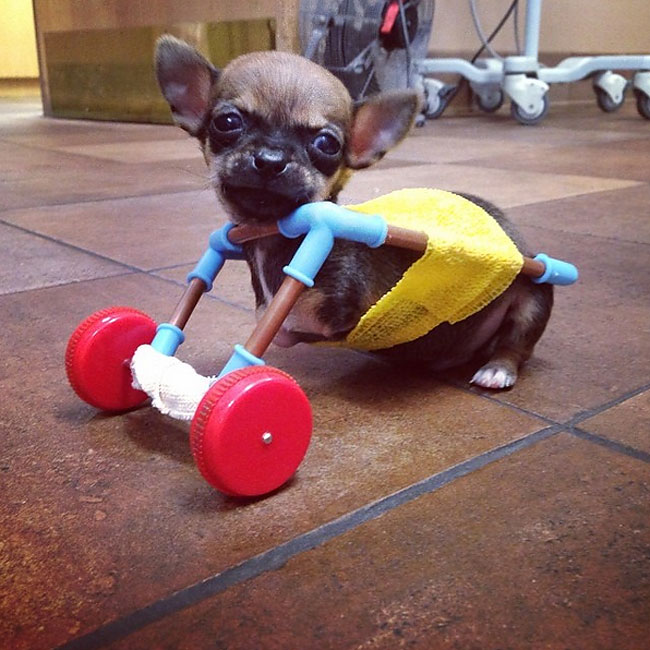 Get ready for a roller coaster ride of emotion. I seriously can’t even handle Turbo, a chihuahua puppy who was born with only two legs. He may actually be the cutest creature in the world. 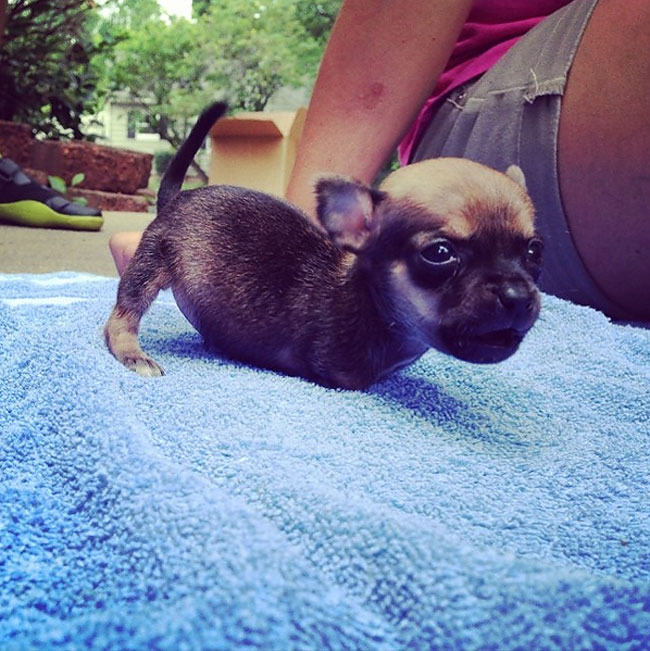 Because of his genetic defect, the little guy can’t walk on his own. However, thanks to the staff at the Downtown Veterinarian in Indianapolis, Indiana, Turbo has some options. 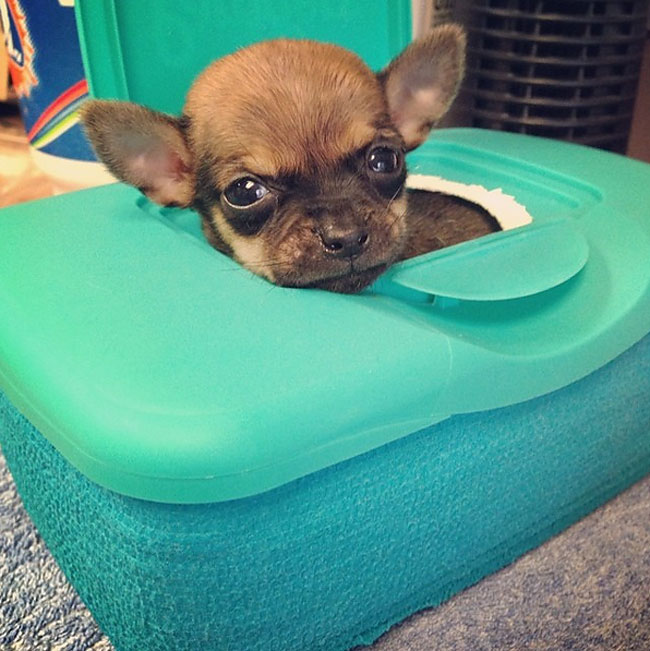 Using a toy helicopter and a toy welding kit, the vets were able to make a custom wheelchair for the puppy. Obviously, it’s extremely adorable. 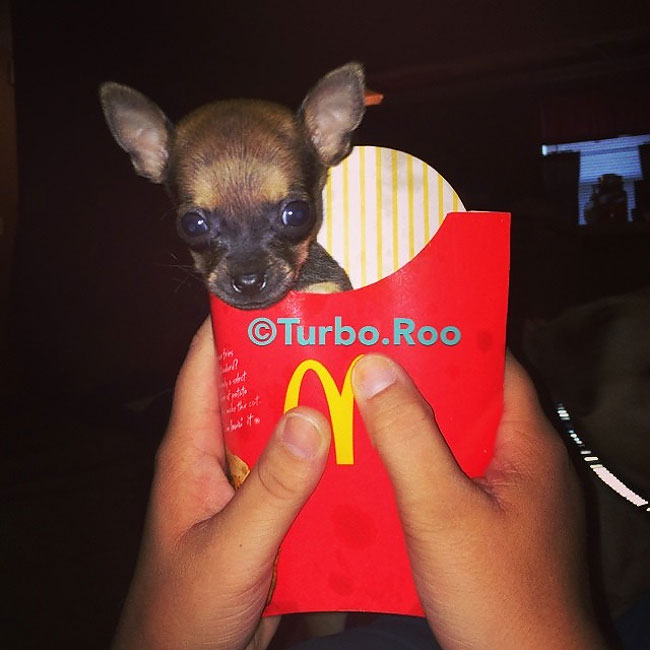 After Turbo’s owners visited several other veterinarians who said they couldn’t help, Dr. Kim Cline from the Downtown Veterinarian examined him and determined that he was in outstanding health. The owners left the puppy there, where he’s now in the care of staff member Ashley Looper. 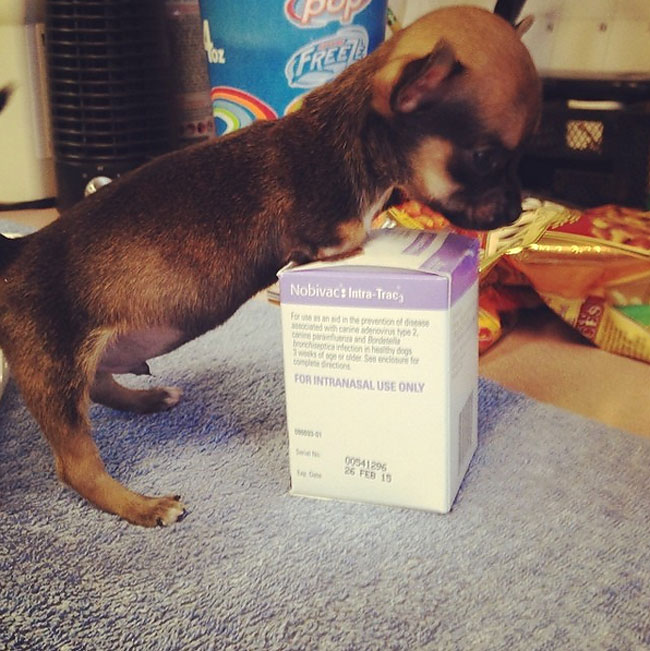 The doctors at the office continued to work with him, and in an attempt to strengthen his mobility, built him several custom carts before finding one that worked. 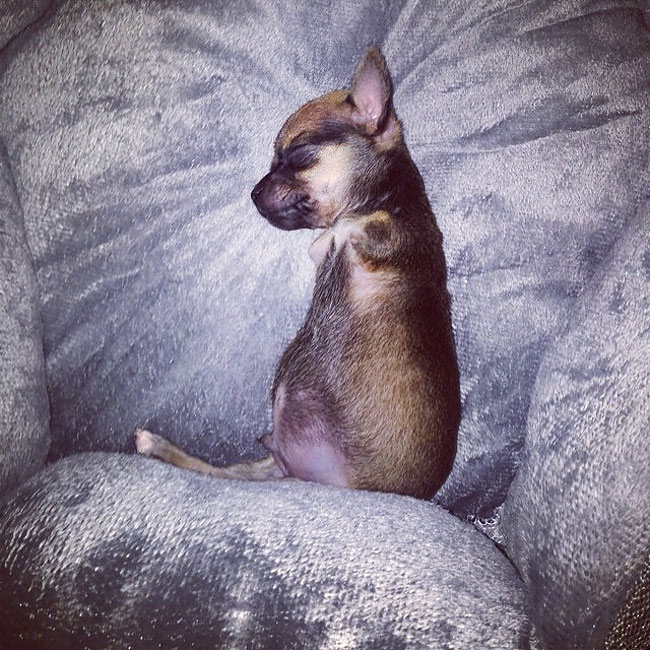 Because a dog needs to be 6 months old before it can be fitted with a cart, the doctors had to get creative with children’s toys. 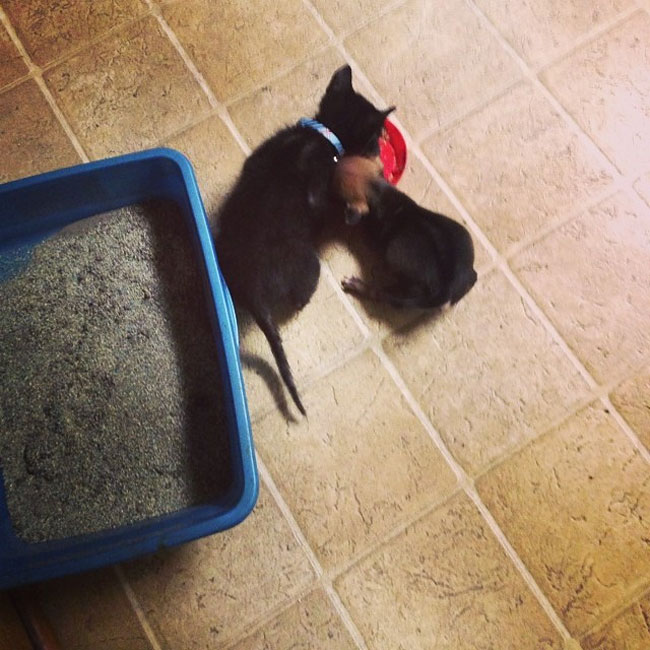 Soon Turbo will have another custom cart as the staff enlisted a local towing company, Zore’s Inc., to make a new one that’ll last until Turbo can be fitted for a proper one. 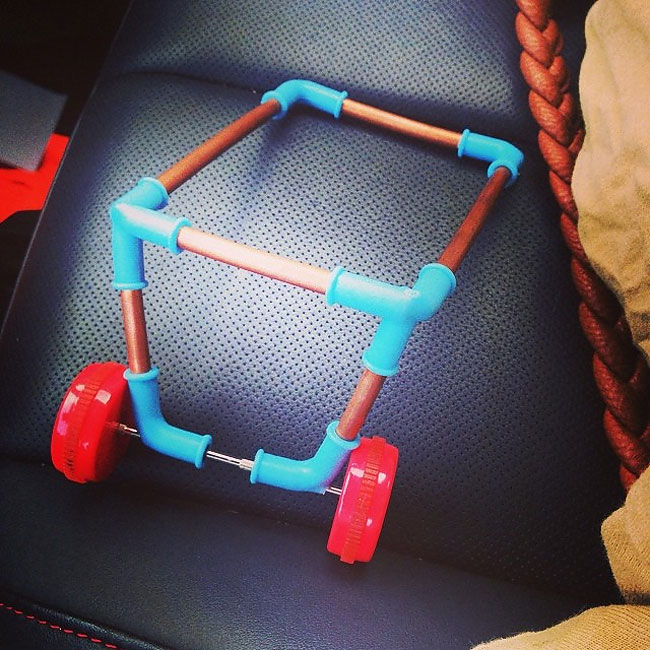 Until then, you can check Turbo’s Instagram and cry from the overwhelming cuteness. 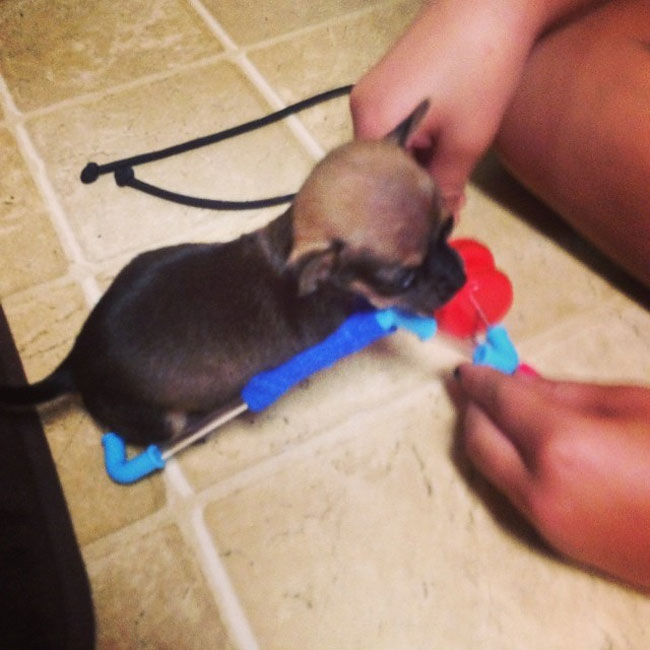 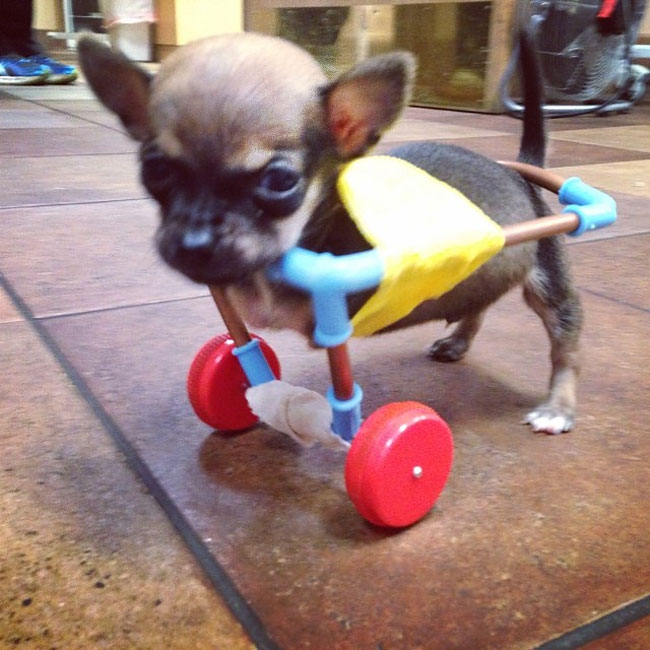 Saving Cat
Their First Steps
This Modern Dog House Is Designed To Fit Your Home’s Aesthetic
Artist Creates A Christmas Miracle On Windows Of A Children’s Hospital
Thousands of Birds Take Flight for the “Snettisham Spectacular”
Pandas Get To Know Their Wild Side
Ginny –The Dog Who Rescues Cats
Hot Spring Bath Opens For Japanese Macaques On Hokkaido
Weird Medieval Paintings Of Cats Licking Their Butts
This Dog Muzzle Is Perfect To Scare The Hell Out Of Neighbors On Halloween
Kids Will Be Kids! James Nathaniel Likes To Turn People Into Children By Making Their Heads Bigger.
Chinese Cats Saved From The Cooking Pot
The Last Of The Kings: Very Sad Photos Of The Hard Life Of Congolese Gorillas
Studio Schicketanz Have Designed A Modern Dog House With A Green Roof
“We Call It A Movement”: Couple Releases Photography Book To Elevate Beauty Standards For Black Kids
Corgi Gets Photoshopped Into Popular Movie Posters
The Japanese Use a Real Rabbits As Case For Smartphone
Cat Owner Sabine Fallend Photographs Her Eyeless Cat Who Sees With His Heart
Fight!
There’s A Species Of Wild Cats Where The Adults Look Like Kittens Their Entire Lives
Cat Dressed In Tiny Sailors Outfit Becomes Captain Of Russian Cruise Ship
A Young Elephant Calf vs Buffalo Bull in South Africa
We'll Just Happen To Serve Great Coffee In The Company Of Homeless Cats With Leukemia
This Cat Looks Like A Pirate, But That Just Makes His Mom Love Him Even More!
children, wheelchair

An Artist Transforms The Shapes Of Animals Into Cubes To Makes Them Definitely Look Straight Out Of Minecraft
The Oldest Captive Orangutan in the World
These Photos Of Children Fighting Monsters From Their Nightmares Are Adorable
Stuff on Scout's Head
The Funniest Finalists For Comedy Wildlife Photography Awards 2018
The Dog Project: 120 Playful Papier-Mâché Pooches Let Loose On The Beach
Terrier Meysi is the World’s Smallest Dog
"Shop Cats Of New York": Photographer Captures Cats In Shops All Over NYC
Children's Section Entrance
Cat Dressed In Tiny Sailors Outfit Becomes Captain Of Russian Cruise Ship
Source of inspiration since 2007. Proudly hosted by WebHostingBuzz.
Privacy Policy · Terms of Service · Content Removal Policy 🇺🇦 ❤️