California-based Rick Satava found the sight of thousands of jellyfish lazily swimming in a glass aquarium mesmerizing when he visited the Monterey Bay Aquarium in the late 1980s. 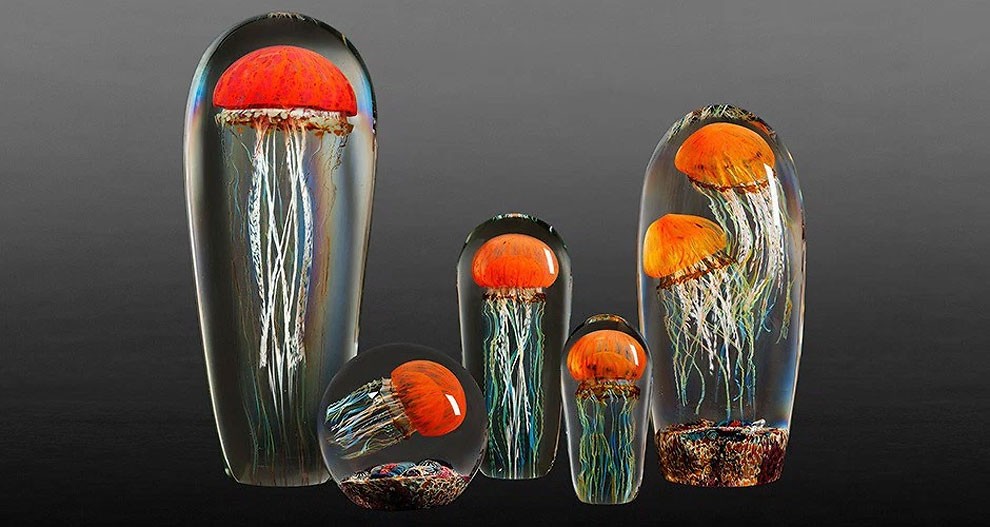 Satava saw an opportunity to make art out of what he saw, and had the idea to capture the haunting beauty of jellyfish in glass. 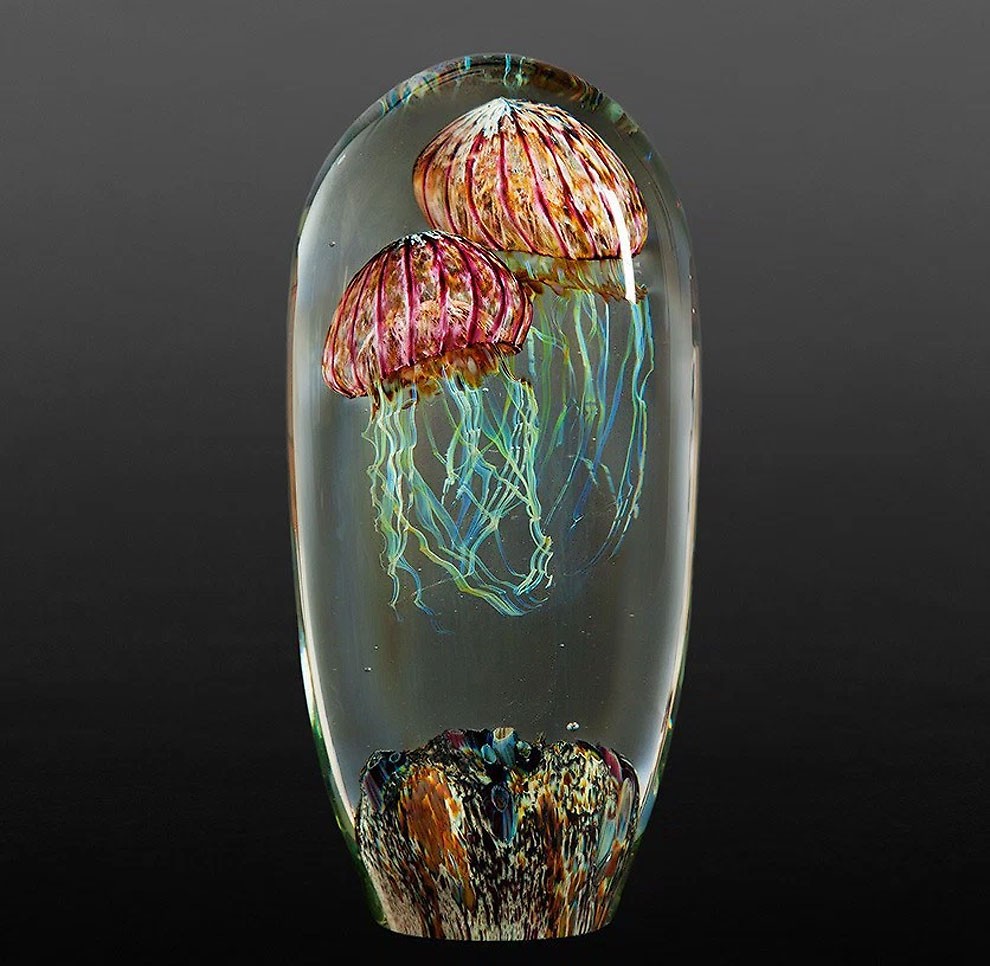 He spent the next three years in experimentation, trying to get the colors right and master the glass-in-glass technique. 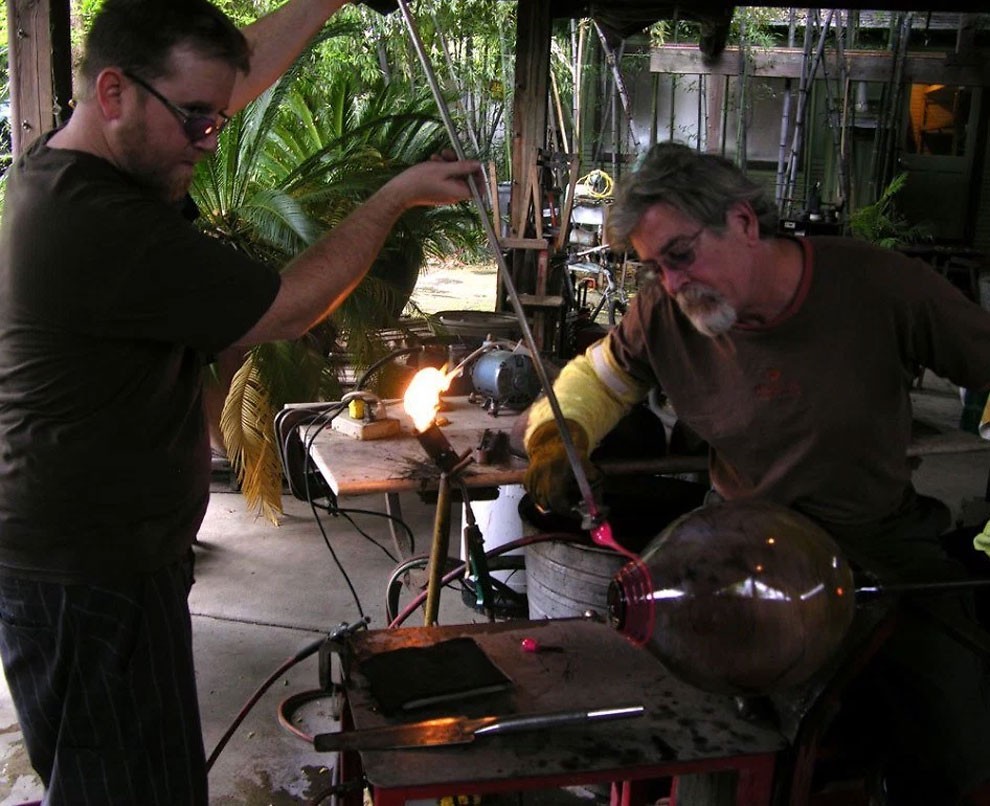 This technique is an art form that has existed for many centuries. It works by encasing a glass sculpture in a second layer of glass — hence, ‘glass-in-glass’. Glass is malleable when it’s still warm, so the artist can easily manipulate it into any form. With the help of translucent pigments, Satava was able to capture the undeniable beauty of jellyfish. 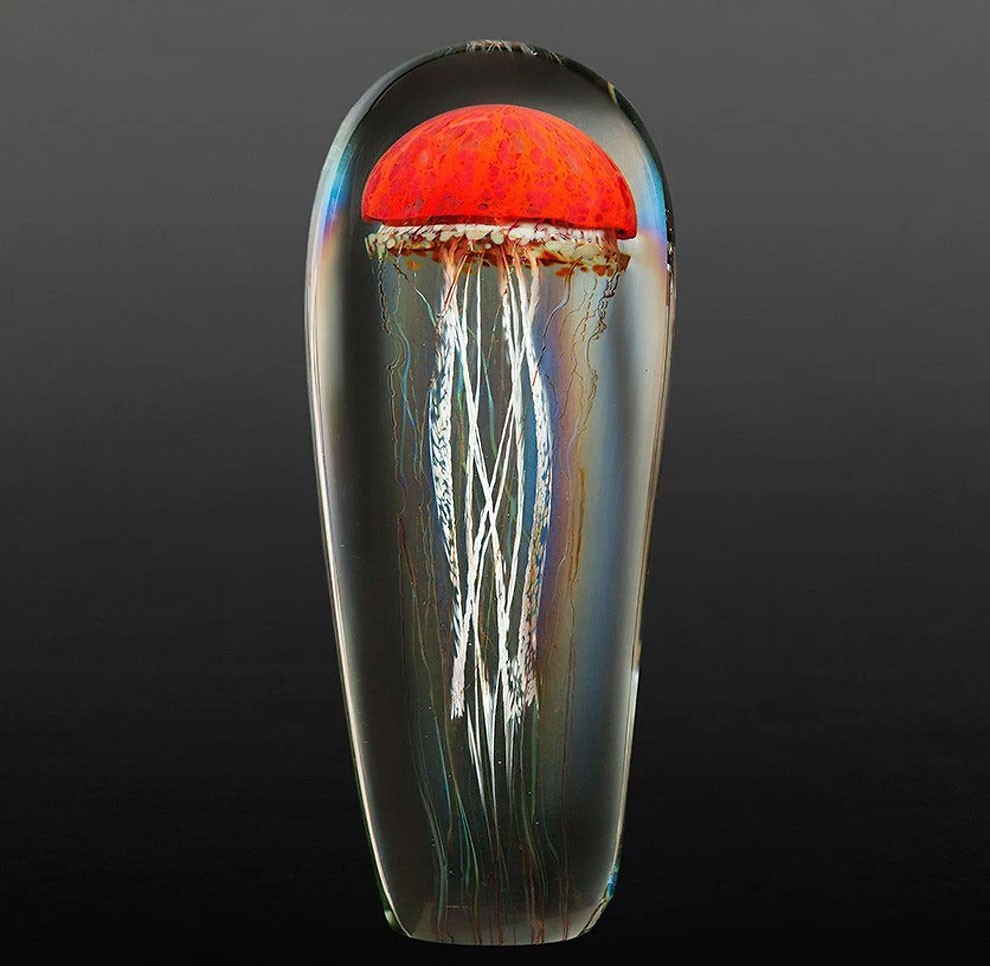 He describes his sculptures as: “Vertically oriented, colorful, fanciful jellyfish with tendril-like tentacles and a rounded bell encased in an outer layer of rounded clear glass that is bulbous at the top and tapering toward the bottom to form roughly a bullet shape, with the jellyfish portion of the sculpture filling almost the entire volume of the outer, clear-glass shroud”.

Satava’s jellyfish sculptures were finally ready to be sold in public in 1990. And by 2002, he was designing and producing an average of 300 sculptures monthly. 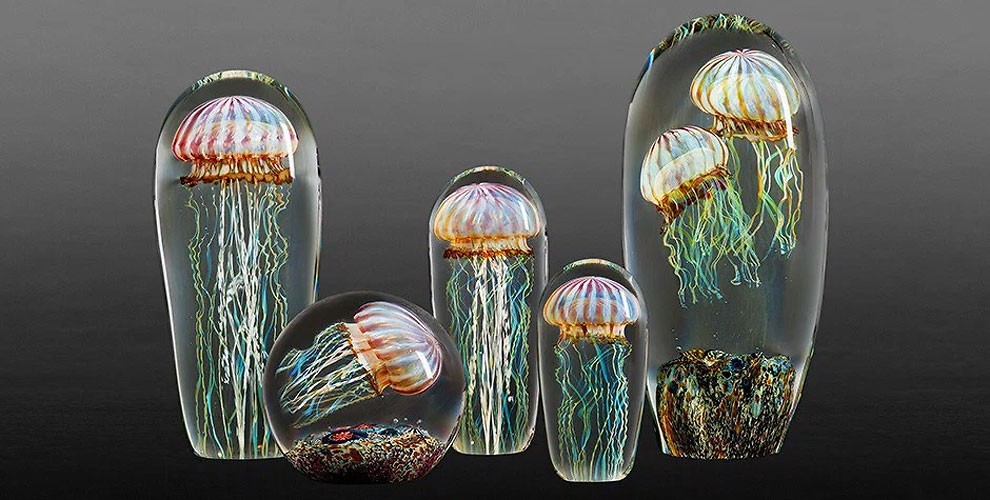 The jellyfish sculptures have become so popular that two of them even made an appearance in Marvel’s ‘Guardians of the Galaxy’. 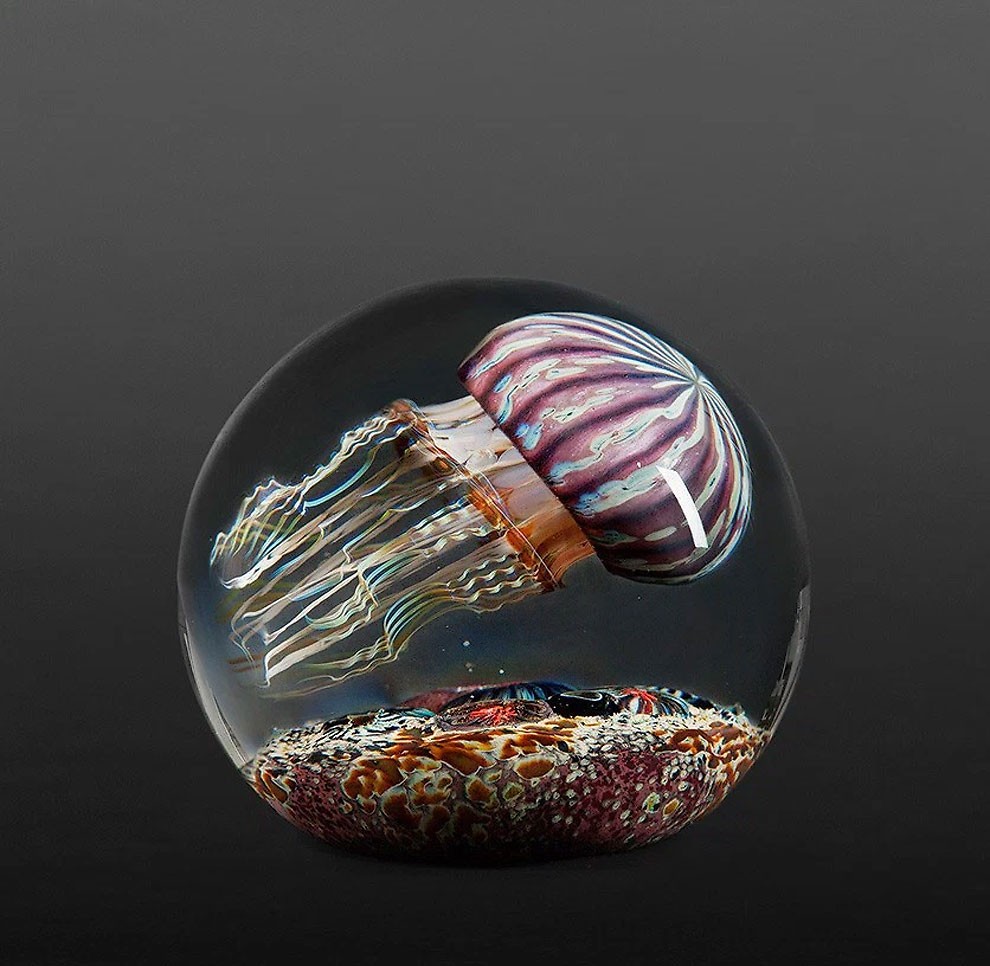 “Our jellyfish sculptures are in the recent movie, ‘Guardians of the Galaxy’, during two scenes in the broker’s gallery and we are thanked in the film’s credits. They used two pieces, one small Ribbed Purple Jellyfish and the other a Magnum Moon Jellyfish. If you had a chance to see the film, we hope you spotted them.” 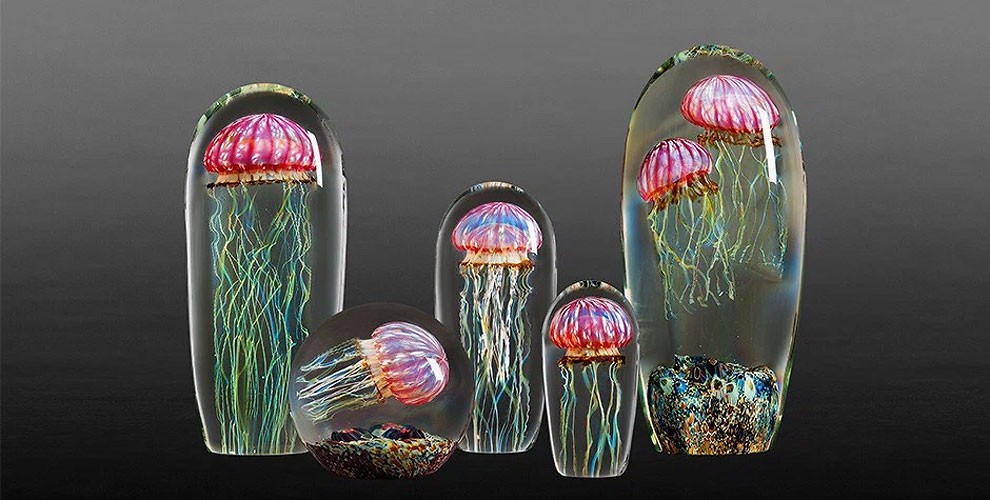 Via Pultastic, My Modern Met

Talbotics: Original Robot Sculptures Made from Found Objects
These Photographs Of Fathers And Their Sons Reveal The Full Wonder Of Human Genes
This Japanese Artists Creates Realistic 3D Portraits Of People’s Cats
Incredibly Unique Shadow Doodles By Vincent Bal
The Wood Art Of Mark Doolittle
Hand-Built Porcelain Sculptures by Nuala O’Donovan Mimic Fractal Patterns Found in Nature
These Architects Wanted To Work Outside, So They Made A Mobile Office In A Caravan
These Photos Will Blow Your Mind – Russia In The 90s Through The Lens With French Photographer Lise Sarfati
Handsome Devils Puppets: These Eerie Puppets Are Made With Human Hair, Antique Lace, And A Dead Grandmother’s Jewelry
"I'm With Her": These Hillary Clinton Portraits Were Taken On The Campaign Trail
Song Dong's Waste Not at the Barbican
Ostankino Tower Celebrating Victory Day
Donald Trump Really Doesn't Want You To See These Photos
Jessica Stoller: Flesh, Feminism and the Sublime
Artist Shoetree Creates Living, Breathing Sculptures From Old Nike Sneakers
Vladimir Franz - Completely Tattooed Czech Presidential Candidate
Meet The Father Who Makes Amazing Sculptures Out Of Toast For Daughter Who Has Severe Food Allergies
These Artists Makes Belgian Lake Mysteriously Glow
Otagi Nenbutsu-ji Temple: A Secret Garden In Kyoto Features 1200 Stone Sculptures
The Skeleton Krewe
This Artist Creates Dazzling Realistic Portraits Of Pictures In Pictures
Artist Studies Psychoanalysis And Visualize The States Of The Subconscious In Her Bizarre Sculptures
Bone Shamans and Ogre Spirits: The Thrilling Madness of Eskimo Figurines
These Ridiculous Propaganda Postcards Warn Men About The Dangers Of Women’s Rights From The Early 20th Century
appear, incredibly, jellyfish, realistic, sculptures, these