Photo of the Day: Steve Jobs Giving His Middle Finger To IBM, 1983 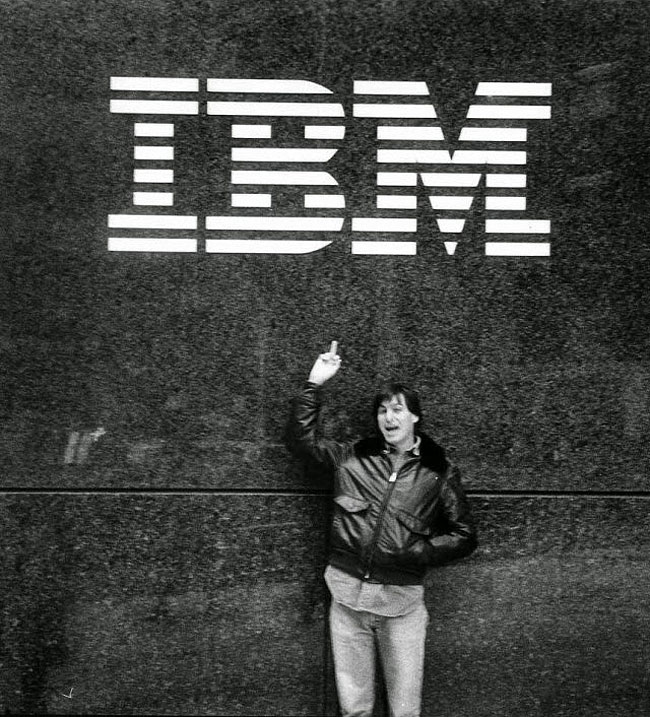 This rare photograph of Steve Jobs demonstrates the Apple co-founder’s infamous rebellious spirit as he “flips the bird” outside an IBM building in New York City.

It was taken in 1983 when the Macintosh team visited the city for a meeting with Newsweek, and was posted to Google+ by Andy Hertzfield, a member of the original Macintosh development team, “in memoriam for Steve Jobs as 2011 draws to a close”:

“In December 1983, a few weeks before the Mac launch, we made a quick trip to New York City to meet with Newsweek, who was considering doing a cover story on the Mac. The photo was taken spontaneously as we walked around Manhattan by Jean Pigozzi, a wild French jet setter who was hanging out with us at the time. Somehow I ended up with a copy of it. My editor begged me to include it in my book, but I was too timid to ask for permission, especially since IBM was still making CPUs for Apple at the time.﻿”

Via Vintage Everyday, Cult Of Mac

"Return To Magenta": Photographer Xavier Portela Captures Asia In A Neon Pink Glow
Powerful Photos Show Pope Francis Praying Alone In St. Peter's Square
David Bowie In Mustard Yellow Suit, Photograph By Terry O'Neill In 1974
"Into the Storm...": Daredevil Photographer Captures Incredible Storm Chasing Images
Mushroom, UFO or Superstorm?
BePic.net - Your Source to HD Inspirations
Beautiful 1980s Portraits Capture The Vibrant Residents Of A Single East Berlin Street
This Artist Creates An Abstract Illusion Using Only Black And White Bodypainting
Photographer Found An Abandoned ‘Palace’ In The Desert, It’s Actually A Gameshow Set
Gaze Into the Eyes of Animals Through Stunning Macro Shots
Italian Photographer Expresses His Inner World Through Emotional Photographs
Photo of the Day: Duck Guard
Ivorian Photographer Joana Choumali Shows Modern African Women Dressed In The Traditional Clothes Of Their Ancestors
Choose The People’s Choice Award For Wildlife Photographer Of The Year
Photographer Kevin Fleming Finds Beauty in the Wild
Photographer Omar Reda Captures a Unique Kenyan Tribe
Striking Black And White Photographs Of Venice Beach Eccentrics In 1984
French Dentists Are Protesting That They Are Told To Return To Work Without Proper PPE - They Getting Naked To Protest
Photo of the Day: Hey, Doggy, Bring Back that Ball at Once!!
Spectacular Winners Of The US Nature’s Best Photography Contest 2017
Smartphone Snaps Surprise in The 2021 Mobile Photography Awards
A Man Studied Photography In Prison. These Are The Photos He Took When He Got Out.
Belarusian Swimmer In A Potato Field Turned Out To Be A... Polish Model
Sun Magazine Underwater Photo Shoot
finger, giving, middle, photo, steve

Photographer Explores Abandoned Places At Night And Captures Them In The Most Colorful Way
Muslim Lolita Fashion Is A New Trend Inspired By Japan
Ivorian Artist Sculpts Her Hair Into Hand Gestures In Stunning Photo Series
2013 National Geographic Photo Contest, Part 1: "Places", Weeks 1-3
This is What Photographers Look Like When You Take Away the Camera
This Is Known To Be The Only Photo Of Van Gogh As An Adult
Spectacular Winning Photos Of The 2018 Nikon Small World Contest Reveal The Hidden Beauty Of A Microscopic World
"Lavatory Self-Portraits In The Flemish Style": Artist Recreates 15th Century Paintings In Airplane Toilets
Photographer Chris Cline Can’t Get Enough Of His Dog So He Supersizes Him
Photographer Zachariah Epperson Captures The Magical World Of Ballet And Dancers
2007 ‒ 2023 by Design You Trust. Proudly hosted by WebHostingBuzz.
Privacy Policy · Terms of Service · Content Removal Policy ❤️ 🇺🇦