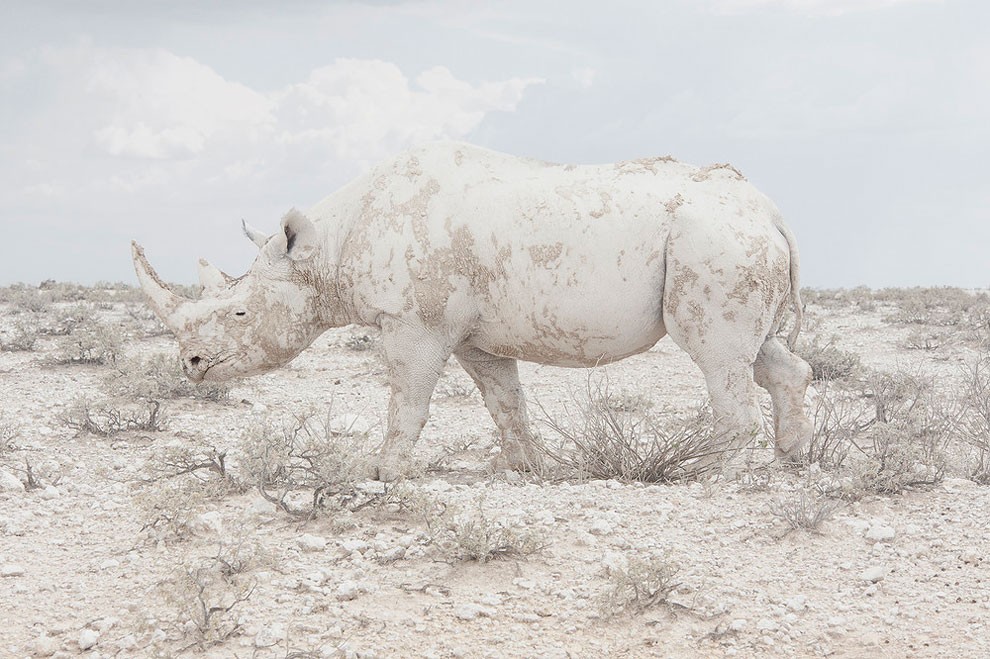 Maroesjka Lavigne, Belgium. Shortlist, Professional, Landscape. A country named after a desert. One of the least densely populated places on earth. Defined by its rich variety of colors yet in a forever changing, yet completely barren landscape. Namibia’s landscape draws you in, through a vast brown plain of scorched earth, and steers you over the white surface of a salt pan to finally arrive in the gold tones of the sand dunes. Patience is required to discover the wide range of Namibia’s subtle scenery. It literally takes you hours, driving though nothing, to at long last arrive at…more of nothing.

The sight of other people is rare and only the strategically located gas stations are a reminder of the world beyond. This country is in another time zone, time seems to move slower but it feels more logical, somehow. Captivated by these washed out yet delicately colored landscapes, you can drive for hours. Chaperoned by herds of giraffes or zebras, shadowed by flocks of flamingos, suddenly stumbling upon a family of elephants. The animals look up curiously, but soon forget about you and slowly continue their journey, unhurried by your presence, at their own pace. (Photo by Maroesjka Lavigne/Sony World Photography Awards) 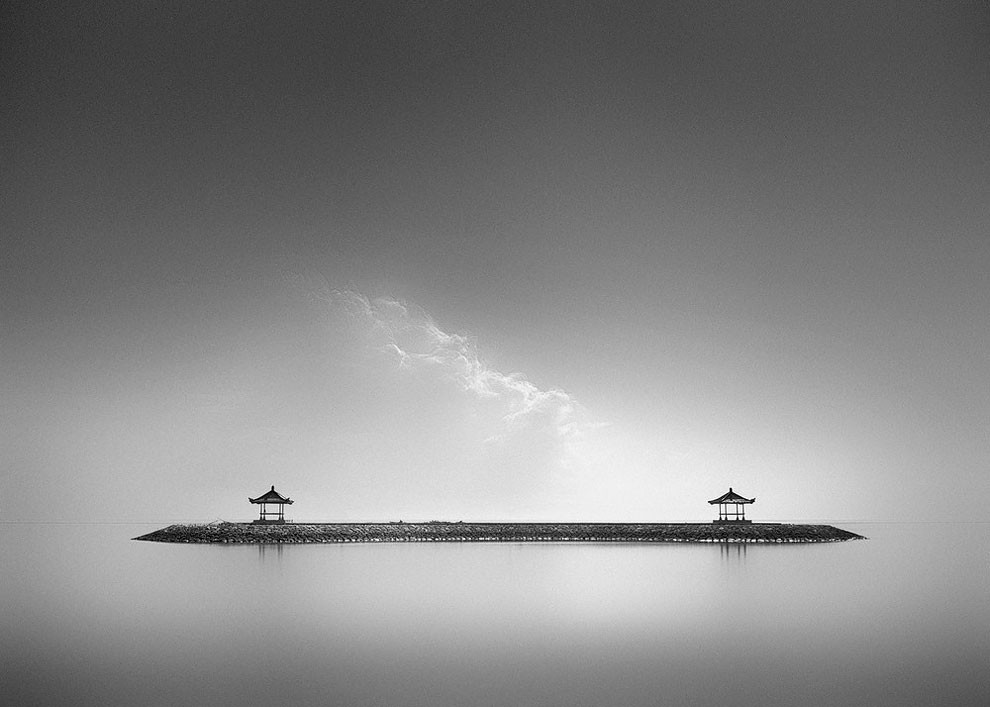 Tugo Cheng, China. Shortlisted, Open Competition, Travel. A fisherman is farming the sea in between the bamboo rods constructed for aquaculture off the coast in southern China. (Photo by Tugo Cheng/Sony World Photography Awards) 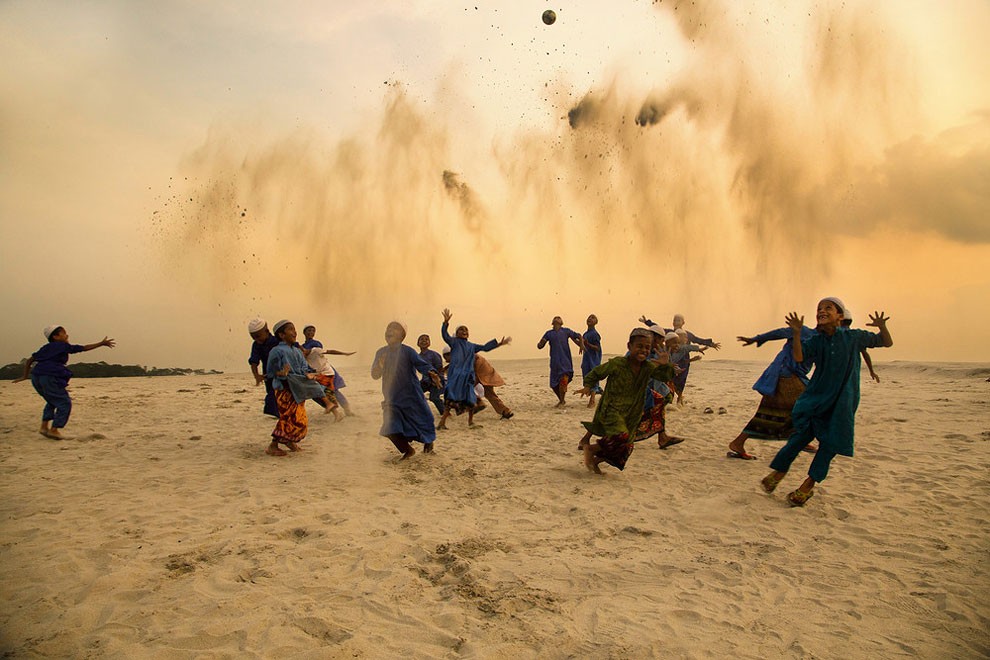 Tanveer Rohan, Bangladesh. Shortlisted, Open Competition, Smile. After a long tiring day a group of kids who are studying in Madrasa (school for religious studies) find solace in a make shift football game. It didn’t matter to them who won or lost after the game but to cherish the soft rays of the evening sun by what they might call as the celebration with sand and joy. This photograph was taken from near Dhaka, Bangladesh. (Photo by Tanveer Rohan/Sony World Photography Awards) 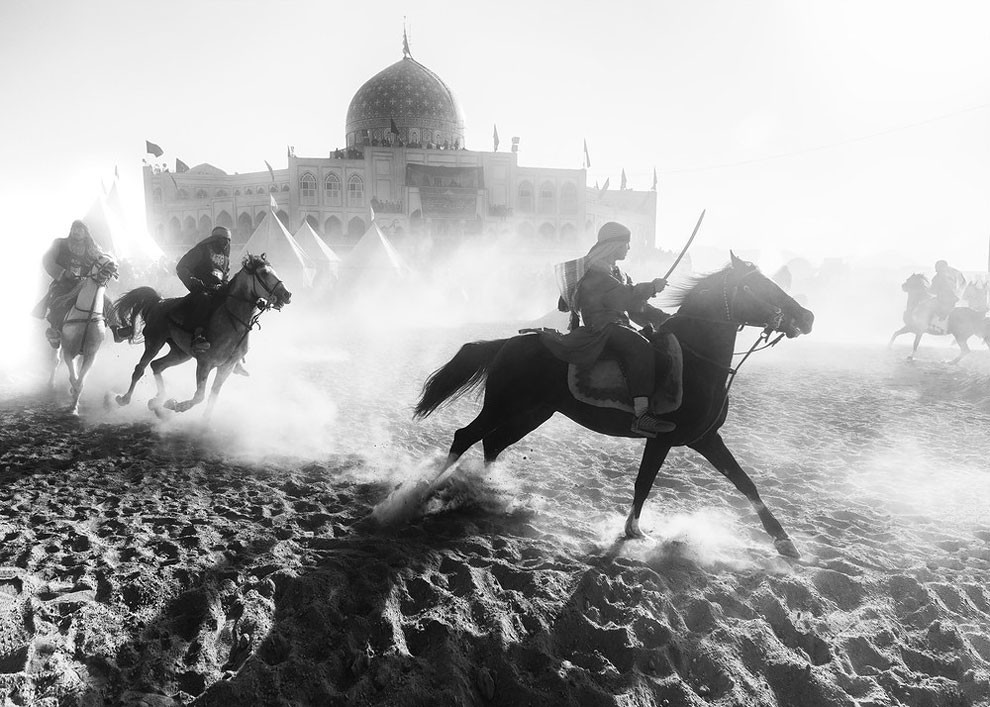 Amir Hoosein, Iran. Shortlisted, Open Competition, Arts and Culture. Religious views on the land of Muslims, always has been and will remain. In Persian culture it refers to condolence theater and Naqqali which are traditional Persian theatrical genres in which the drama is conveyed wholly or predominantly through music and singing. It dates from before the Islamic era and the tragedy of Saiawush in Shahnameh is one of the best examples. In Persian tradition, Tazieh and Parde-khani, inspired by historical and religious events, symbolize epic spirit and resistance.

The common themes are heroic tales of love and sacrifice and of resistance against the evil. While in the west the two major genres of drama have been comedy and tragedy, in Persia, Tazieh seems to be the dominant genre. Considered as Persian opera, Tazieh resembles European opera in many respects. Persian cinema and Persian symphonic music have been influenced by the long tradition of Tazieh in Iran. Abbas Kiarostami, famous Iranian film maker, made a documentary movie titled “A Look to Tazieh” in which he explores the relationship of the audience to this theatrical form. Nasser Taghvaee also made a documentary on Tazieh titled Tamrin e Akhar. (Photo by Amir Hoosein/Sony World Photography Awards) 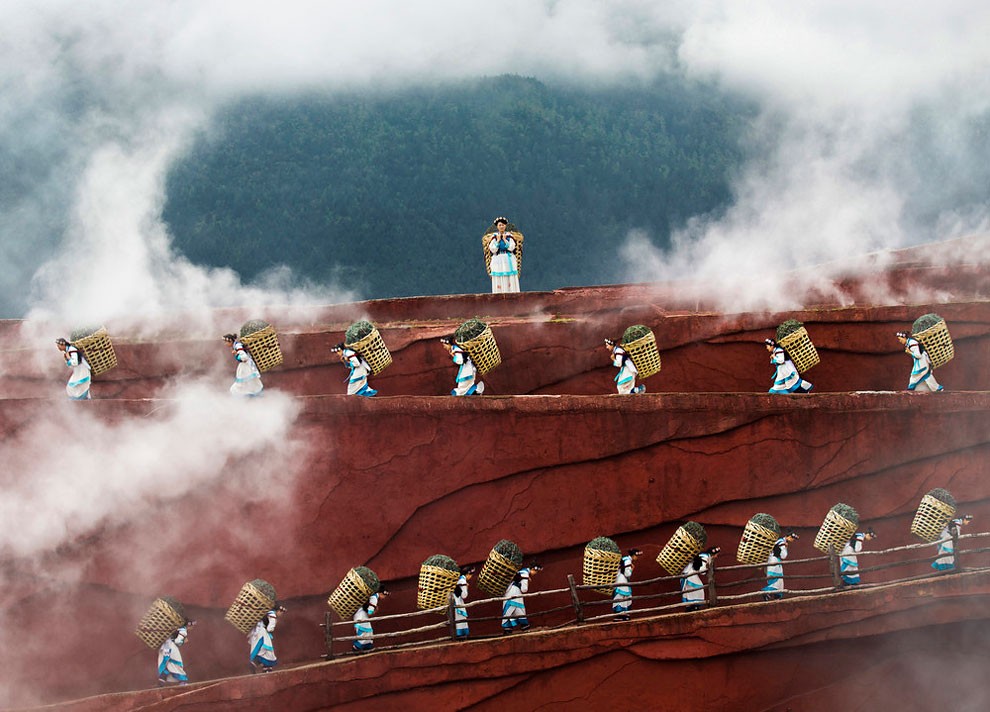 Nader Saadallah, Egypt. Shortlisted, Open Competition, Arts and Culture. This is the Impression Lijiang, it is a cultural theatrical show that describes the lifestyle and several interesting traditions of the Naxi, Yi and Bai people in a colourful and flamboyant outdoor production.The show is innovatively staged in the morning and afternoon. Lijiang city, China. (Photo by Nader Saadallah/Sony World Photography Awards) 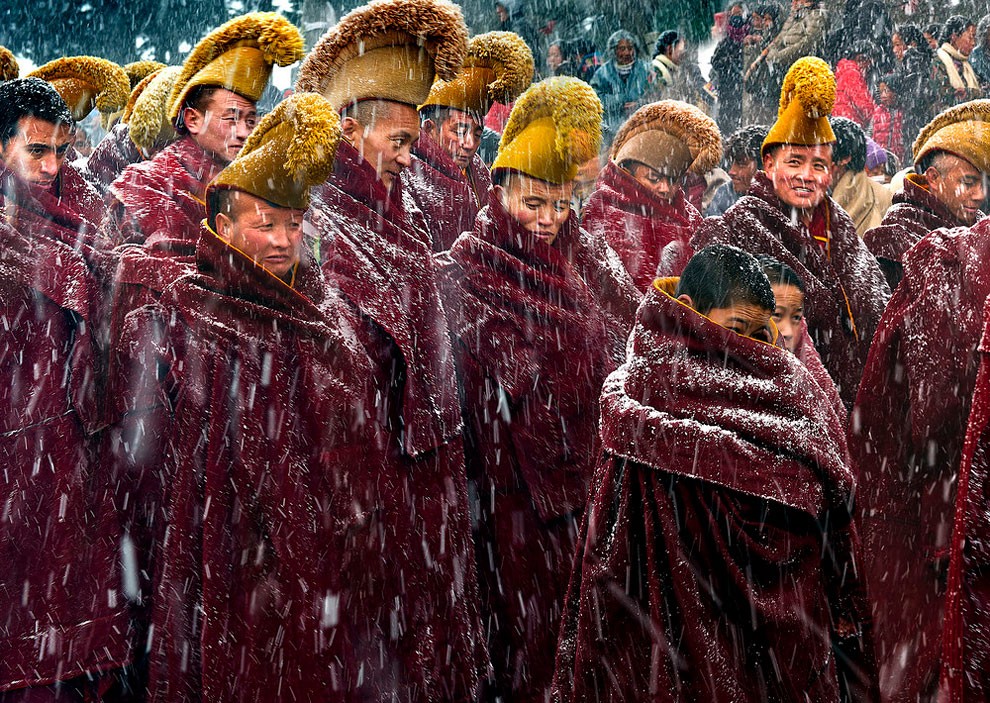 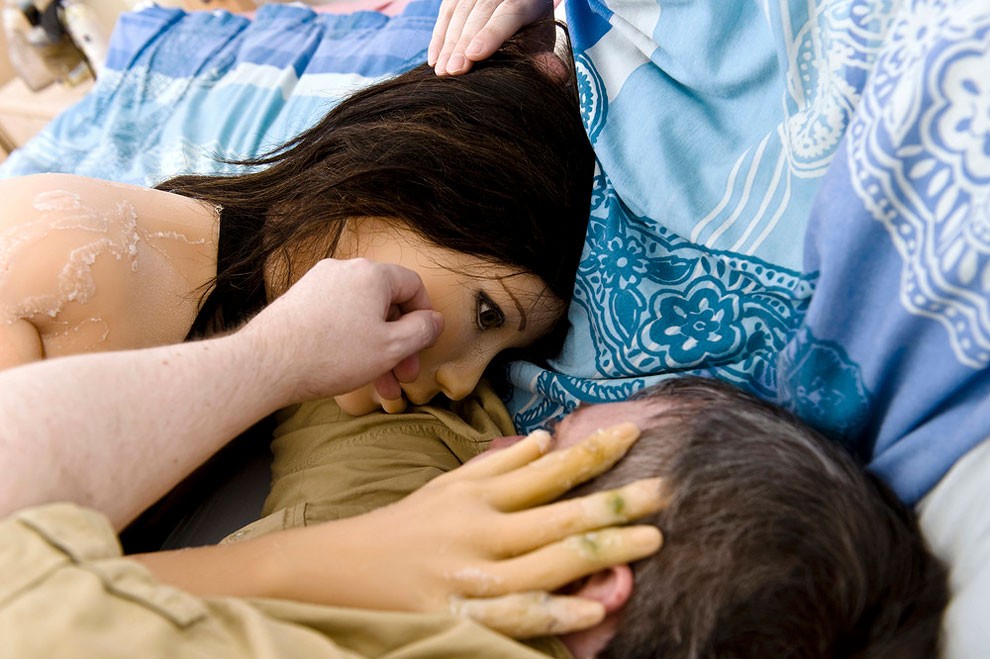 Sandra Hoyn, Germany. Shortlist, Professional, Daily Life. Jenny and Dirk cuddling in bed. The series “Jenny’s Soul” shows the relationship between a man and his silicone doll. Is it possible for a human being to develop feelings for a doll, to love her’ Dirk (name changed) has been living together with his silicone doll Jenny for four years now. He bought the doll for 6000 Euros after suffering a breakdown and because he was feeling lonely.

Because the doll looks so real, she is not just a sex toy, she has become a partner to him. Dirk has forged a strong emotional relationship with Jenny. He is able to hear Jenny, talk to her and perceive her soul. Dirk is happy. His doll gives him a sense of closeness and security. He would not want to live without her. Their everyday life takes place. (Photo by Sandra Hoyn/Sony World Photography Awards) 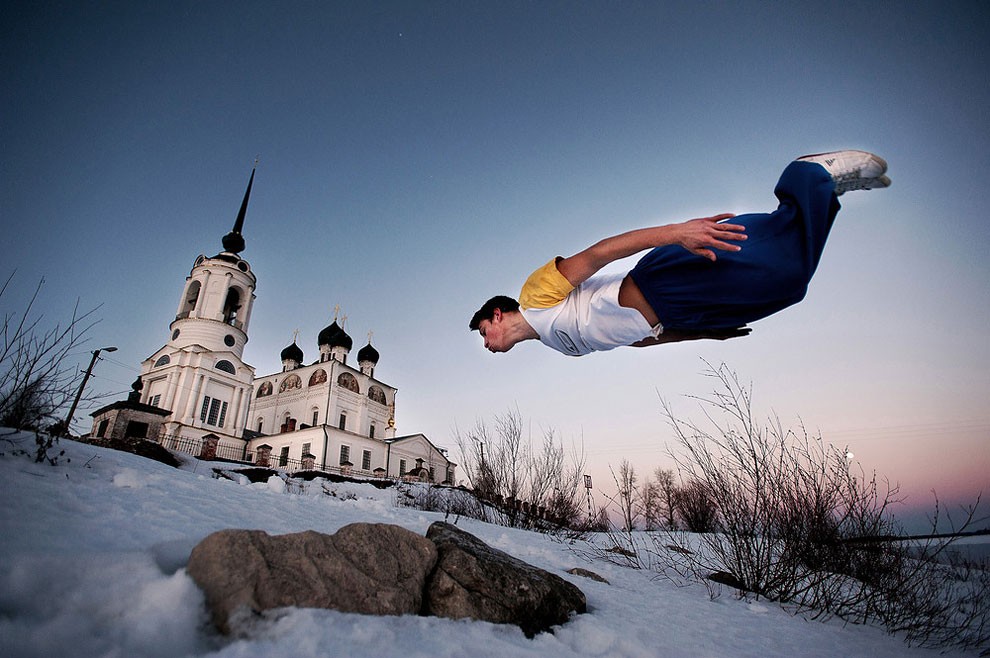 Anton Unitsyn, Russia. Shortlist, Professional, Daily Life. Parkour jumpers on their daily training. On the background – one of the main Solvychegodsk sights – Blagoveshchensky Cathedral. This church is among 3 churches, that survived soviet times. At the begining of 20th century there were 13 churches in Solvichegodsk. After breakdown of the communism, Solvichegodsk as many small towns in russia is stuck in it’s past. Despite everything, people in Solvichegodsk still belive in their positive future, and wait for wind of change. (Photo by Anton Unitsyn/Sony World Photography Awards) 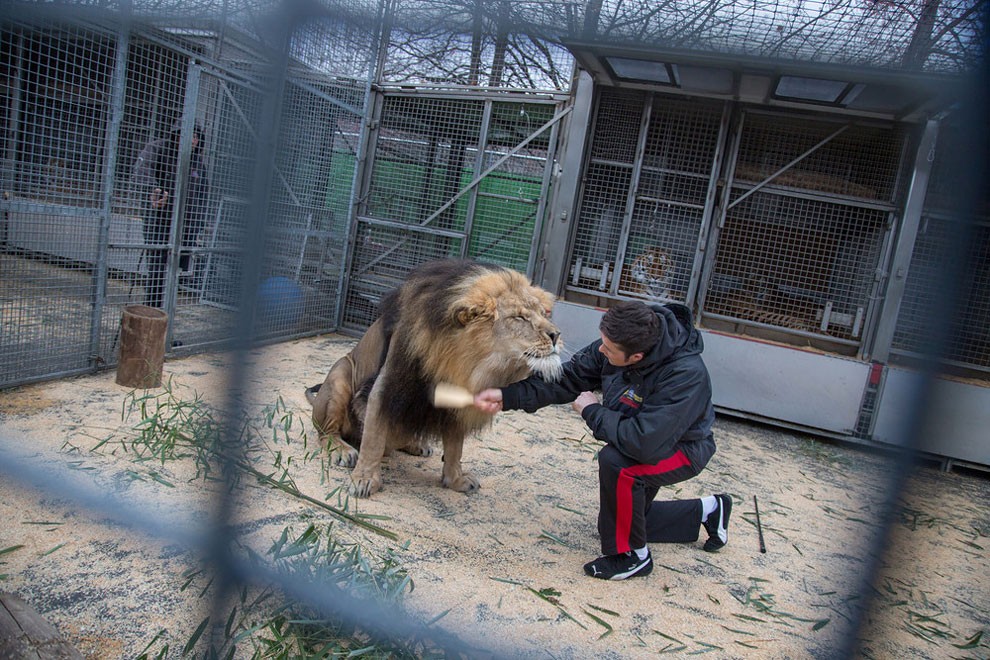 Sandra Hoyn, Germany. Shortlist, Professional, Daily Life. Big Cats Trainer and Presenter Alexander Lacey brushes the mane of lion Masai before a performance. Ringling Bros. and Barnum & Bailey Circus started in 1919 when the circus created by James Anthony Bailey and P. T. Barnum merged with the Ringling Brothers Circus. Currently, the circus maintains two circus train-based shows, the Blue Tour and the Red Tour, as well as the truck-based Gold Tour. Each train is a mile long with roughly 60 cars: 40 passenger cars and 20 freight. Each train presents a different “edition” of the show, using a numbering scheme that dates back to circus origins in 1871 – the first year of P.T. Barnum’s show. (Photo by Sandra Hoyn/Sony World Photography Awards) 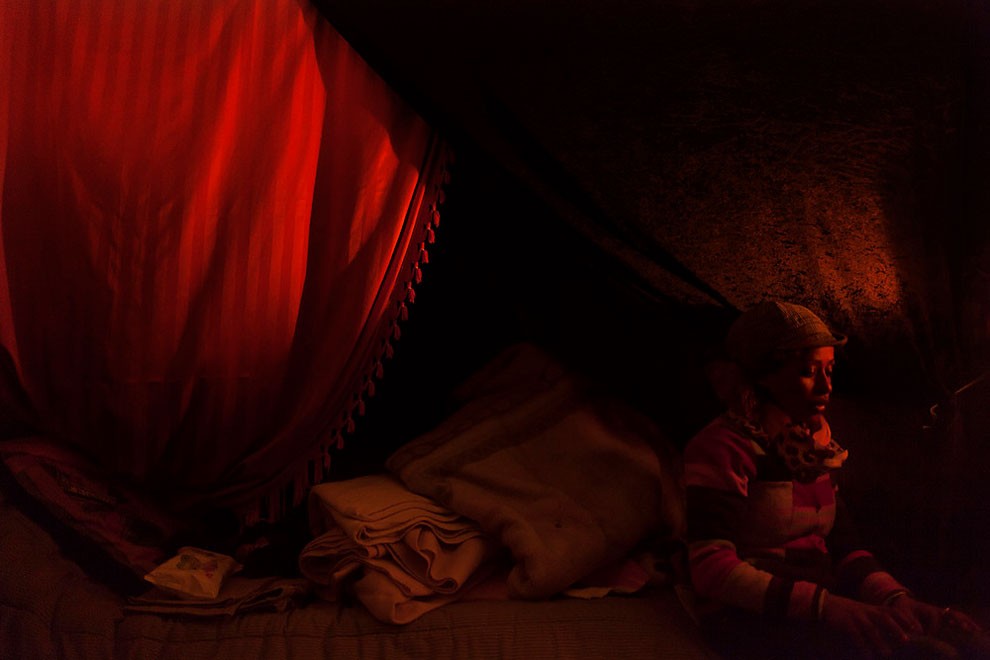 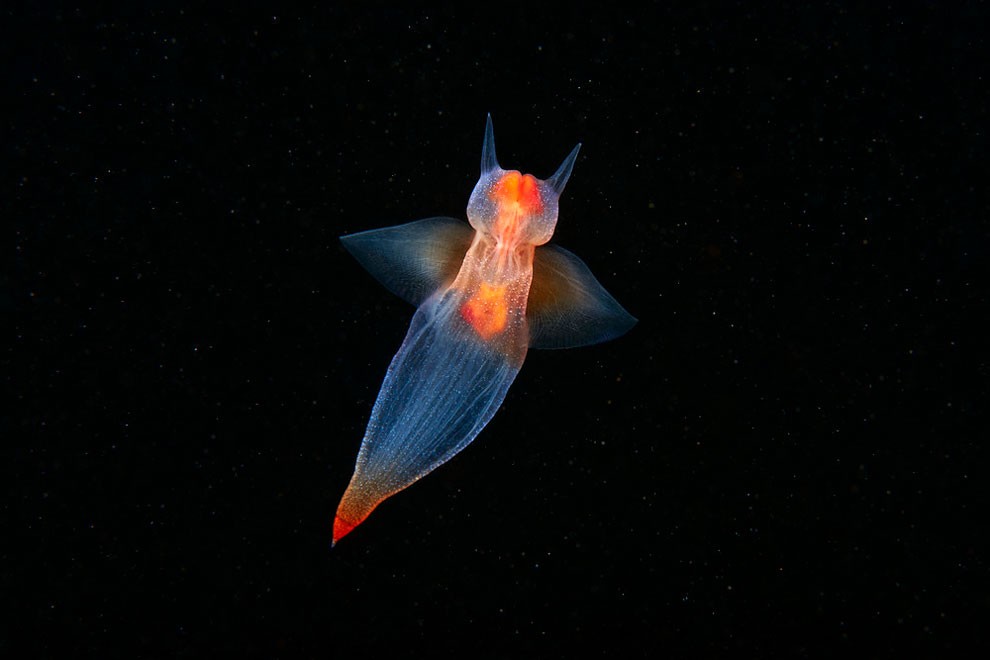 Alexander Semenov, Russia. Shortlist, Professional, Environment. This series represent exploration of the most extreme and far cold-water seas, washing the coasts of Russia, because only few people in the world had chance to dive there. These seas are true pearls of nature, hiding mysteries and treasures not only for divers and scientists – there is another universe with it’s own aliens and fantastic creatures. These strange animals are mostly undescribed.

Some of them are tiny, some are hidden because of their complete transparency, some are beautiful and gentle giants – in the underwater world you can find living things for the first time in the history of humanity, but they were there for millions of years. Modern diving and photo equipment give us a chance to reveal this beauty hidden in the dark. (Photo by Alexander Semenov/Sony World Photography Awards) 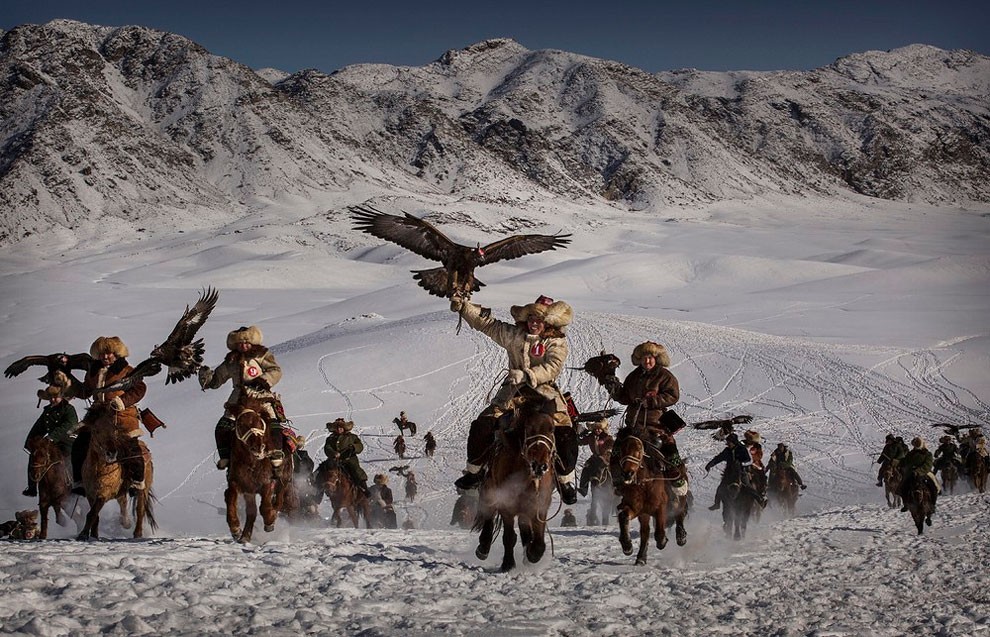 Kevin Frayer, Canada. Shortlist, Professional, Environment. January 30, 2015 in Xinjiang, China. The Eagle Hunting festival, organised by the local hunting community, is part of an effort to promote and grow traditional hunting practices for new generations in the mountainous region of western China that borders Kazakhstan, Russia and Mongolia. The training and handling of the large birds of prey follows a strict set of ancient rules that Kazakh eagle hunters are preserving for future generations. (Photo by Kevin Frayer/Sony World Photography Awards) 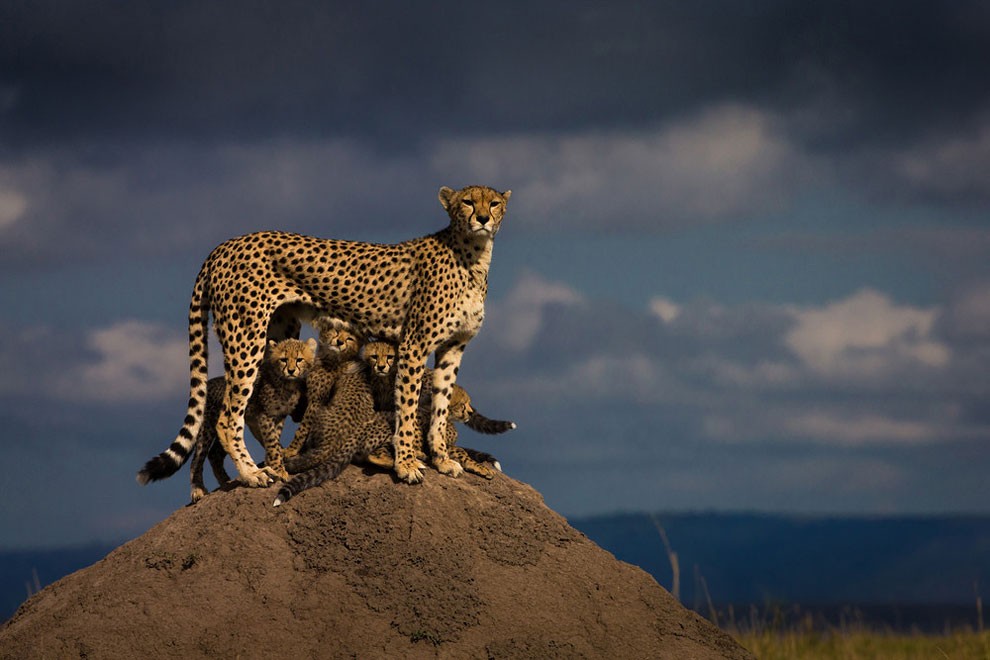 Mohammed Yousef, Kuwait. Shortlist, Professional, Environment. Her name is Malaika. She is well known in Masai Mara reservation (Kenya). her behavior towards her cubs is a great example of perfect motherhood. She spends the whole day trying to keep her cubs safe. After a lioness killed one of her cubs, she is left with five cubs. Series of wildlife images taken in Masai Mara reserve in Africa. (Photo by Mohammed Yousef/Sony World Photography Awards) 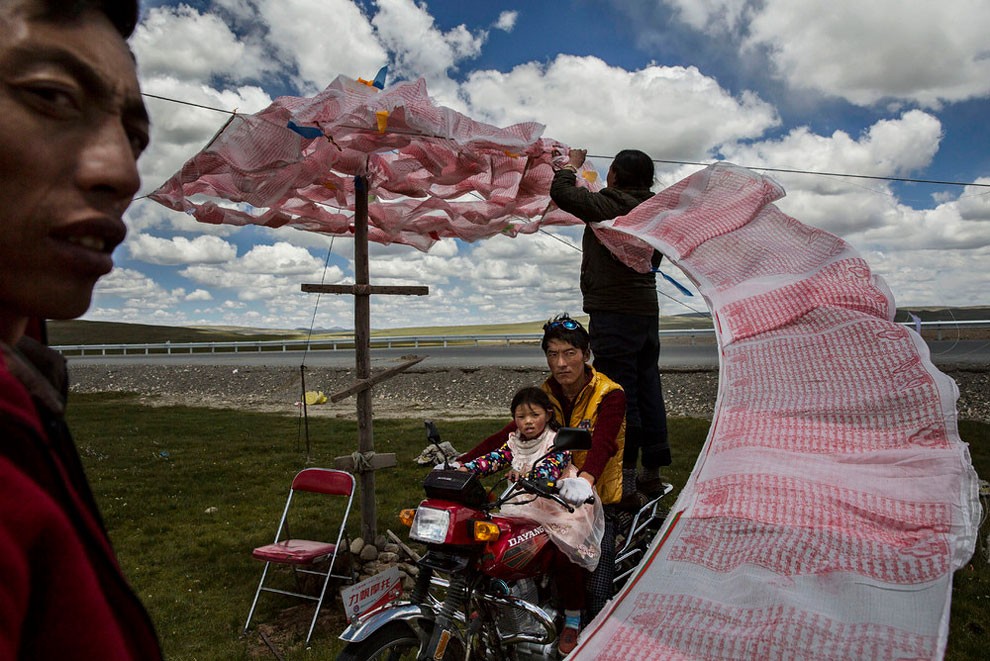 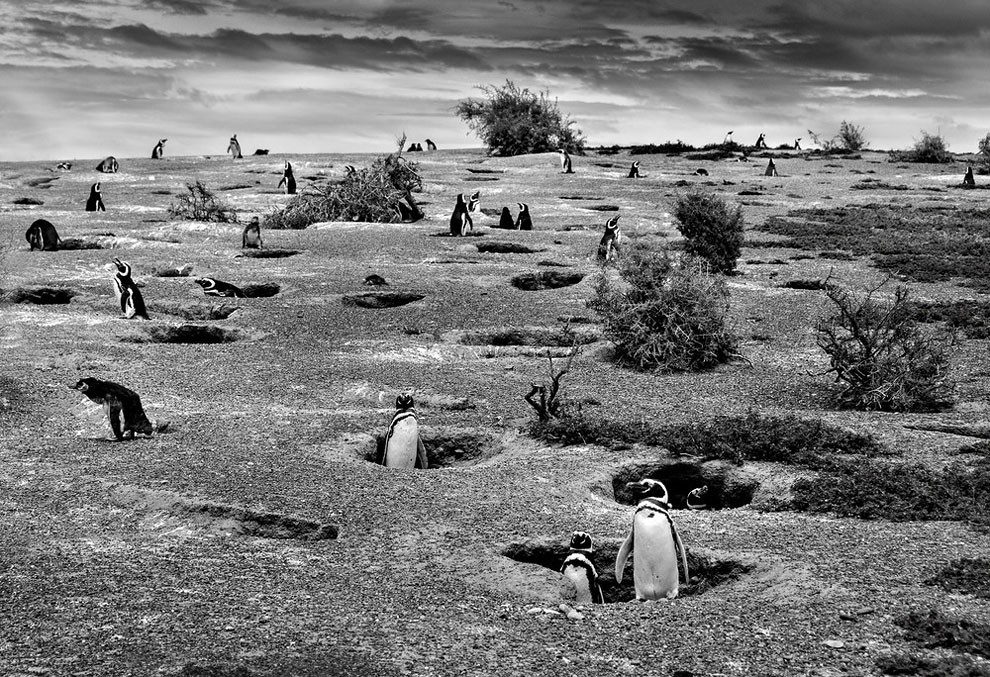 Christian Massari, Italy. Shortlisted, Open Competition, Nature and Wild Life. Penguin chicks in Argentina are dying as a direct consequence of climate change, according to new research. The picture shows the large colony of Magellan Penguins in Punta Tombo peninsula in Chubut Province, Argentina. The colony is the largest in South America and stay at the site until April, incubating their eggs, raising their chicks, and preparing for migration to south Brazil. Due to the effect of increased rainfall and temperature extreme which cause altered fish behaviour and make penguins nests similar to swimming pools the dead of the chicks has increased significantly in the last decades. (Photo by Christian Massari/Sony World Photography Awards) 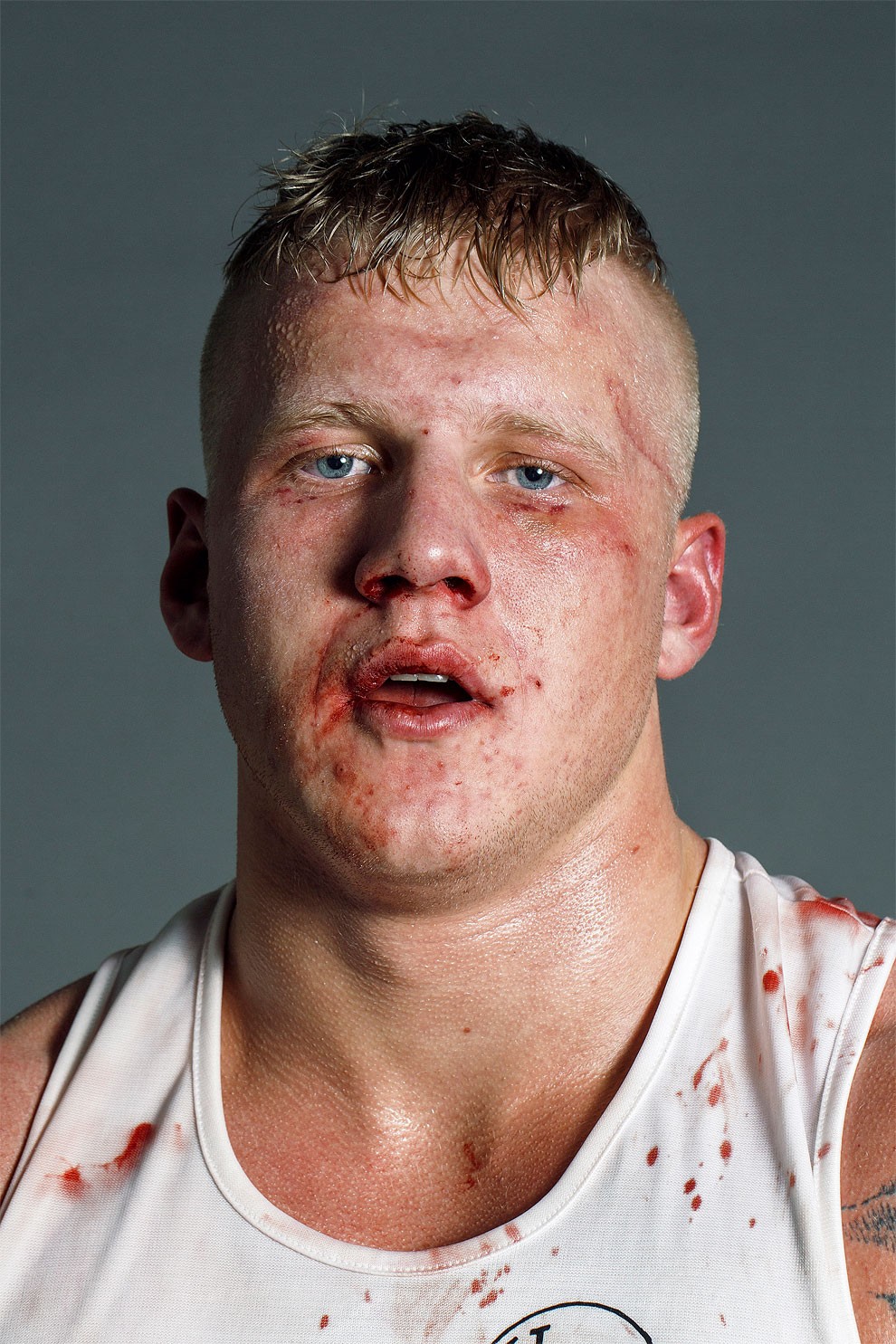 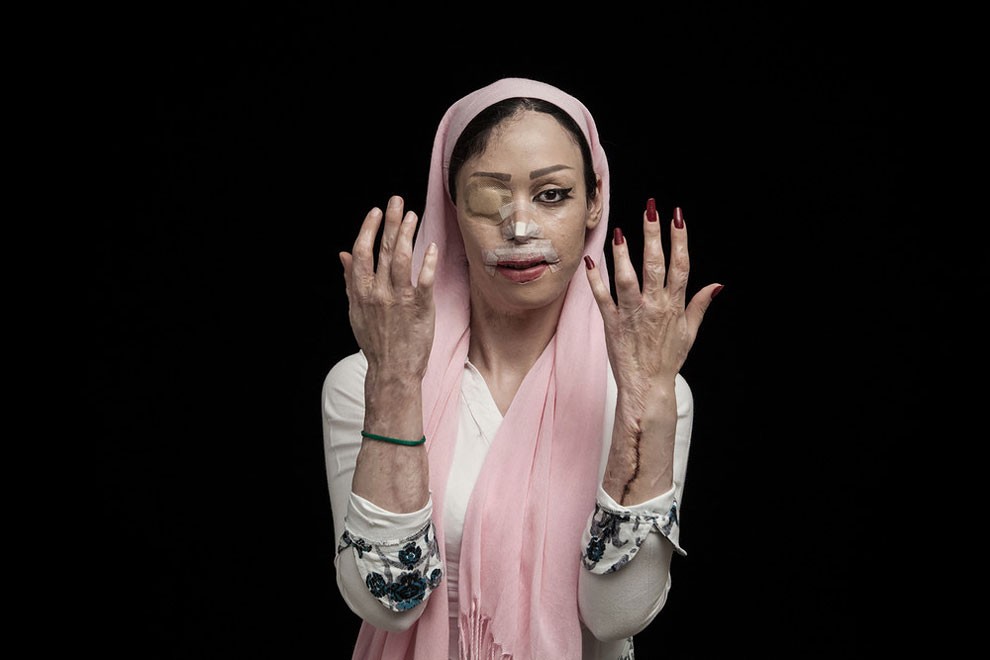 Asghar Khamseh, Iran. Shortlist, Professional, Contemporary Issues. Acid throwing is a kind of violence and according to the official statistics and local news increased compare to the past Iran. This kind of violence is mostly against women and children. These attacks have been done with intent to disfigure, maim, torture and destroy the social life and the future of the victim. The motivation to commit this type of violence is cultural destitiution, intolerance and happens in situations such as family conflicts, rejected marriage proposal, revenge and divorce requests.

Victims in addition physical and psychological damages are faced the experience of social stigma, blame and social unpleasant tags. The victims are in dire need of medical and financial support and counseling services. Unfortunately there is no governmental and nongovernmental organizations to follow these issues in the country and they have to treat themselves only by public aid and donations. (Photo by Asghar Khamseh/Sony World Photography Awards) 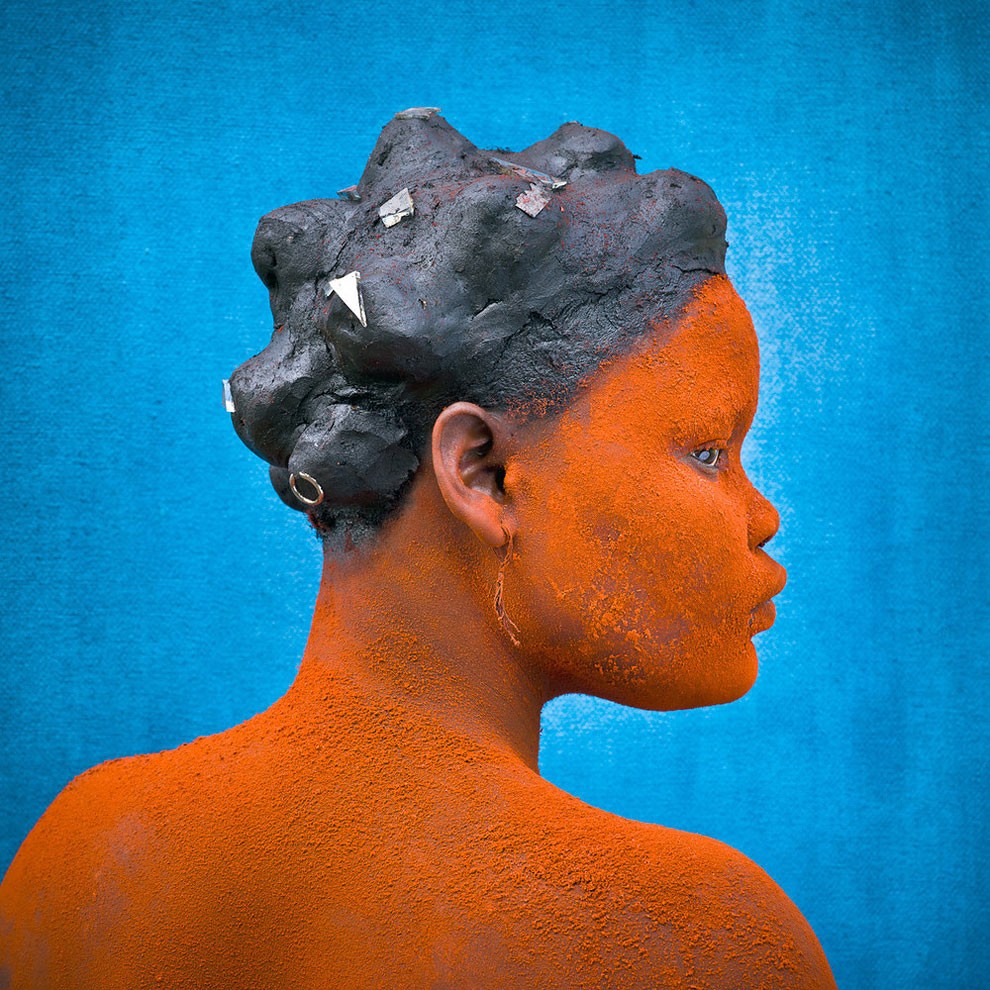 Patrick Willocq, France. Shortlist, Professional, Portraiture. For the Ekondas pygmies in the Democratic Republic of Congo, the most important moment in the life of a woman is the birth of her first child. The young mother is called walé (primiparous nursing mother). A walè carries both responsibilities and status: she returns to her parents, where she remains secluded for a period of 2 to 5 years, and must adhere to several strict taboos during this time.

The ritual is highly competitive, as it’s about having more prestige and power than other walé, so she takes on a nickname to differentiate herself from rivals. Every day the young woman engages in an elaborate beautification ritual to draw attention to herself. She spreads a red preparation, a mixture of powder of ngola wood with palm oil, over her own body. The sophisticated hairstyles, made of a mud like paste, a mixture of ashes from bopokoloko leaves and palm oil, are yet another way for walé to flaunt their uniqueness. Actresses act and stage appearance. (Photo by Patrick Willocq/Sony World Photography Awards)

"Selfie": Photographer Flora Borsi Photoshops Herself Among A Famous Historical Figures
The Winners of The International Landscape Photographer of The Year 2022 Competition Have Been Announced
Marvelous Female Portrait Photography By Katarzyna Markiewicz
Spectacular Winning Photos of The 2022 Underwater Photographer of the Year
Photographer Captures Socialist Architecture Of North Korea In Pastel Aesthetic
These Old Photos of Kit Harington & Emilia Clarke Kissing Has Driven Every “Game of Thrones” Fan Crazy
Striking Drone Photography By Martin Sanchez
Montana Photographer Miles Glynn's Shots Of Buffalo, Wild Horses, And Sweeping Canyons Look Lifted From An Old Western Film
These 64 Colorized Photos From The Past Will Blow You Away
The Oldest Captive Orangutan in the World
Women Paint “Stockings” on Their Legs at a Store in Croydon, London, 1941
Photographer Philippe Echaroux Used A McDonald’s Big Mac Box To Create Stunning Portraits
Color Portraits Of Immigrants At Ellis Island
This Mom Makes Costumes And Takes Awesome Photos Of Her Kids
Amazing Pics From Kyoto "Bullet Tour" Show No Matter How Tight Your Schedule, You Should Go
Amazing Anatomical Photographs from Alec Fraser's Handbook of Brain Surgery, 1890
25 Winners & Finalists Of LensCulture 2021 Street Photography Awards
This Photographer Colorized 30 B&W Photos Of New York From Years Ago
Portrait Photos Of White Wolf AKA Chief John Smith, The Oldest Native American To Have Ever Lived
Fabulous Portraits By Ukrainian Photo Artist Irina Dzhul
Italian Photographer Expresses His Inner World Through Emotional Photographs
Photos of Mark Frechette and Daria Halprin During the Filming of ‘Zabriskie Point’, 1970
Breathtaking Winning Images of The 2021 Drone Photo Awards
Artist Reimagines 5 Disney Fathers As Real Dads, And They’re Hella Handsome
awards, final, photography, shortlist, world