A family of four in their Mercury Monterey automobile on the driveway of their home, 1959. 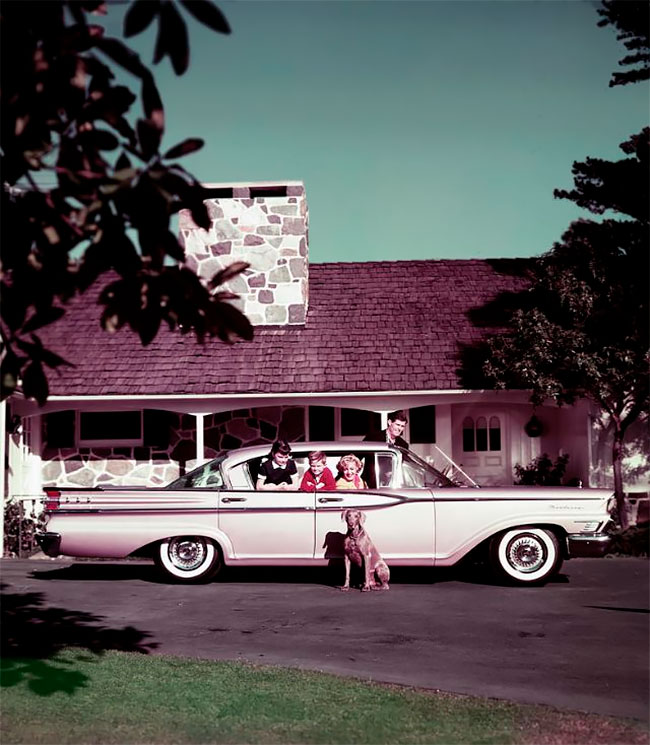 He was best known for his iconic nude photographs of Marilyn Monroe in 1949. Following his long career helping to publicize film personalities, Kelley later shifted to commercial and advertising photography field. Kelley was said to have the gift of establishing instant rapport with his subjects, drawing out the interesting sides of them and making them feel comfortable behind the camera.

Below are 30 commercial photographs taken by Kelley from the late 1950s to the early 1980s.

A family riding in a Ford Monterey automobile watches a helicopter fly above them in an open field in California, 1959. 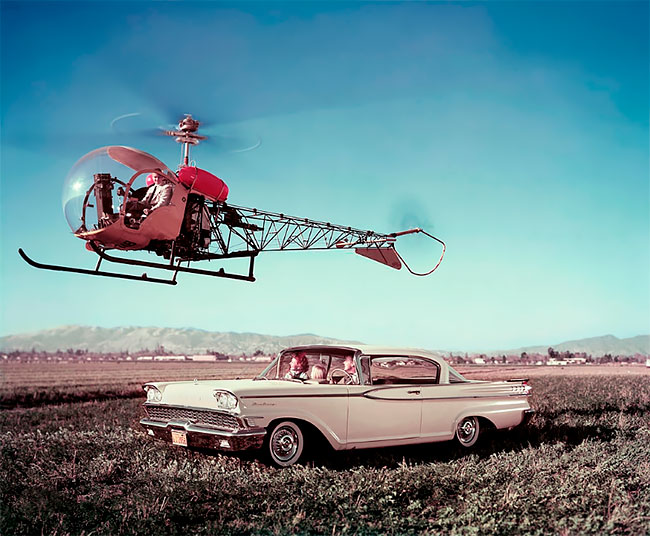 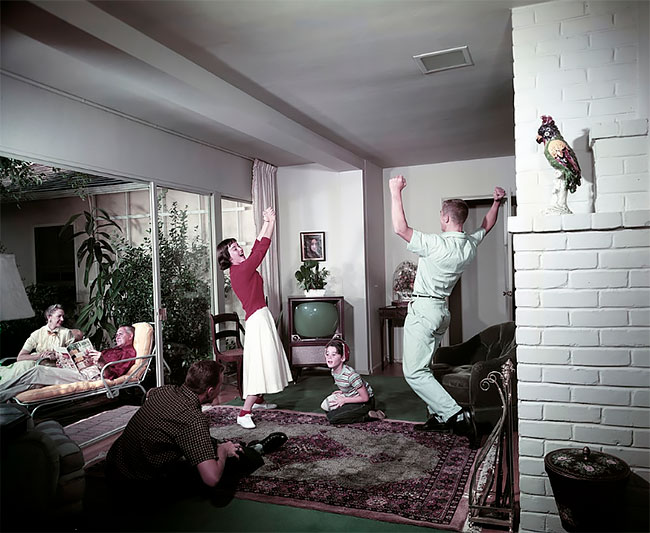 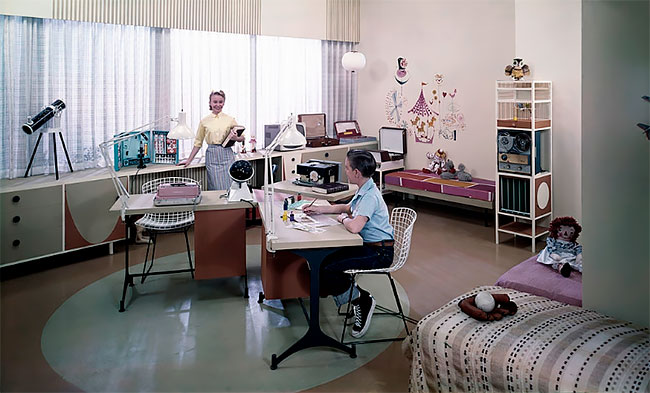 A father and son enjoy some leisure time constructing model cars together, 1960. 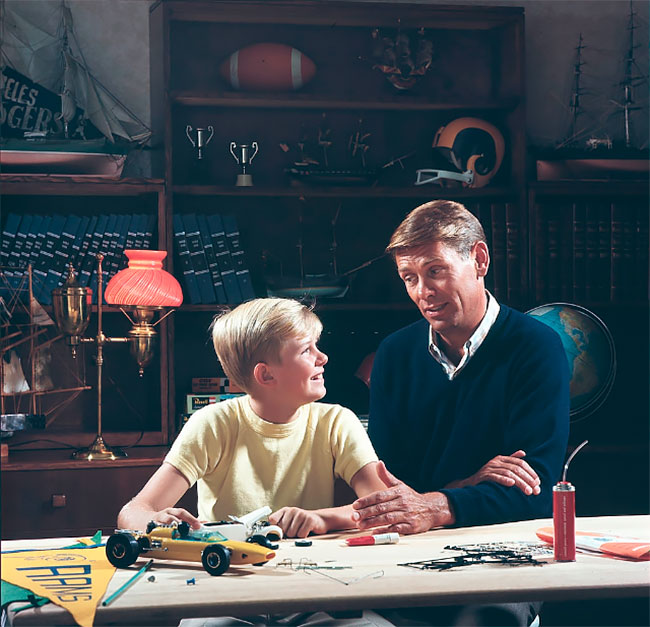 A group of friends enjoy a day outdoors with their automobiles, a Lark Daytona, a Wagonaire, and a Skytopare, are parked in the foreground in Palm Canyon, Palm Springs, CA, 1962. 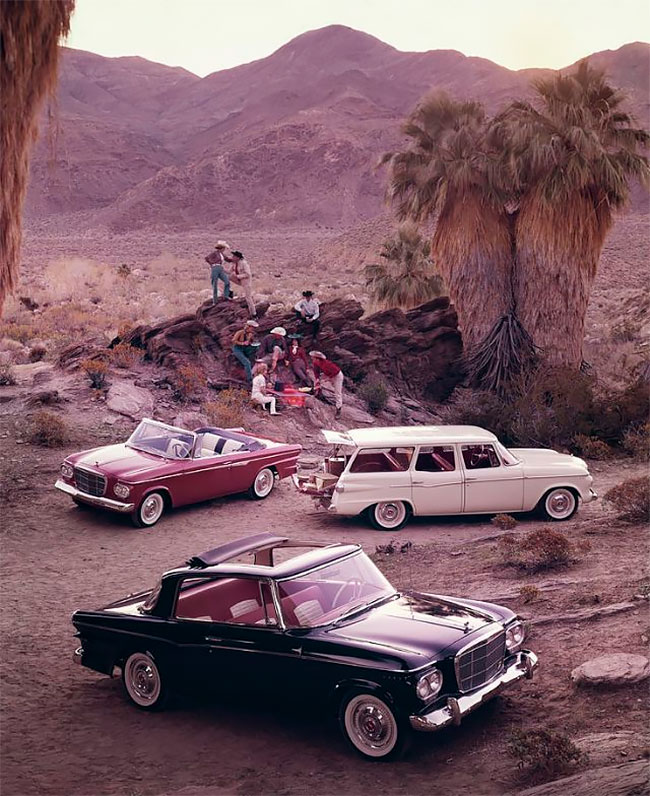 A family enjoys a day out on the lake and unpacks their gear in this advertisement for the 1962 Studebaker Lark Daytona Wagonaire, Santa Barbara, CA, 1962. 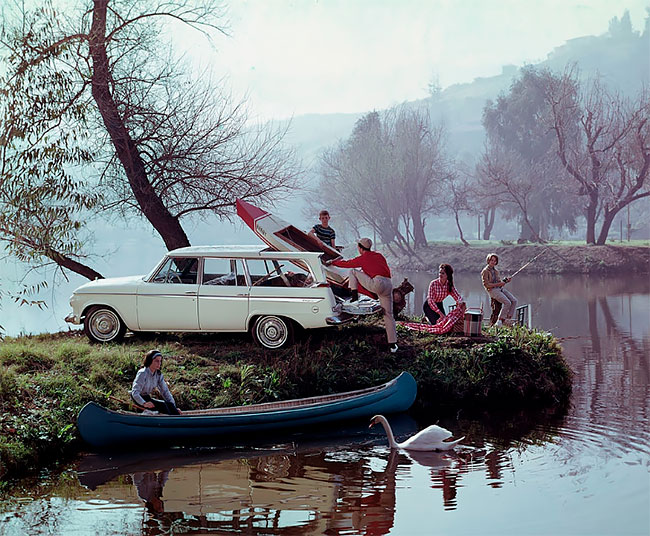 A couple leans against a stone wall while taking a break from their hunt, 1963. Their hunting dog sits between them. 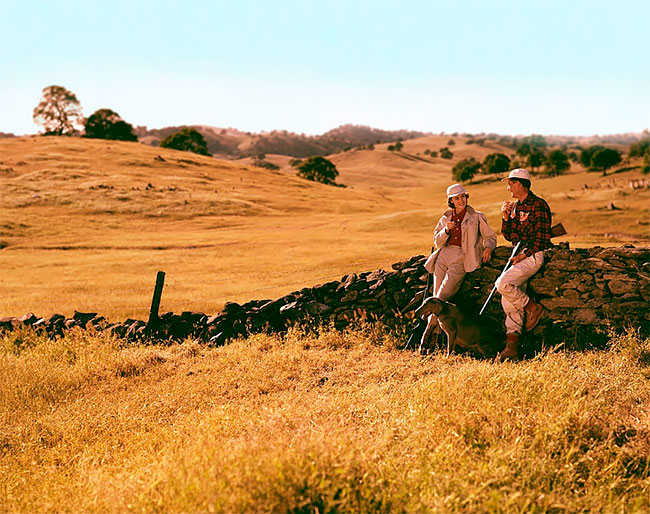 A couple smile while tailgating in hunting clothes and gear with Ballantine beer, 1963. 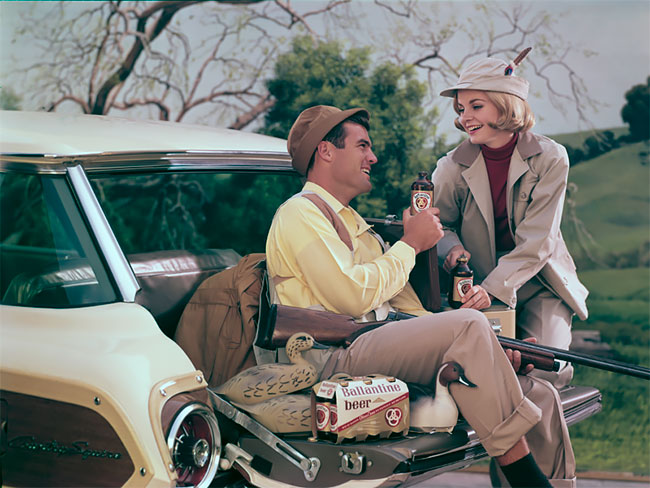 A group of guys and gals and their surfboards gather round a Ford Mustang on the beach, 1964. 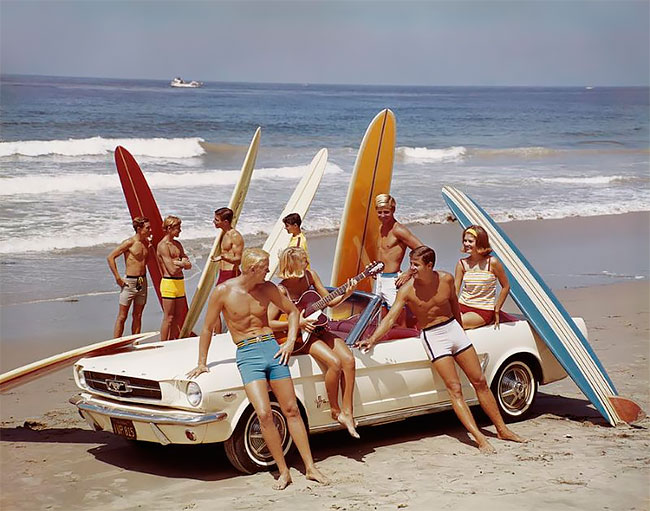 A group of friends sing along at a piano as they enjoy mugs of beer in a staged setting of wood-panelled den, October 1964. 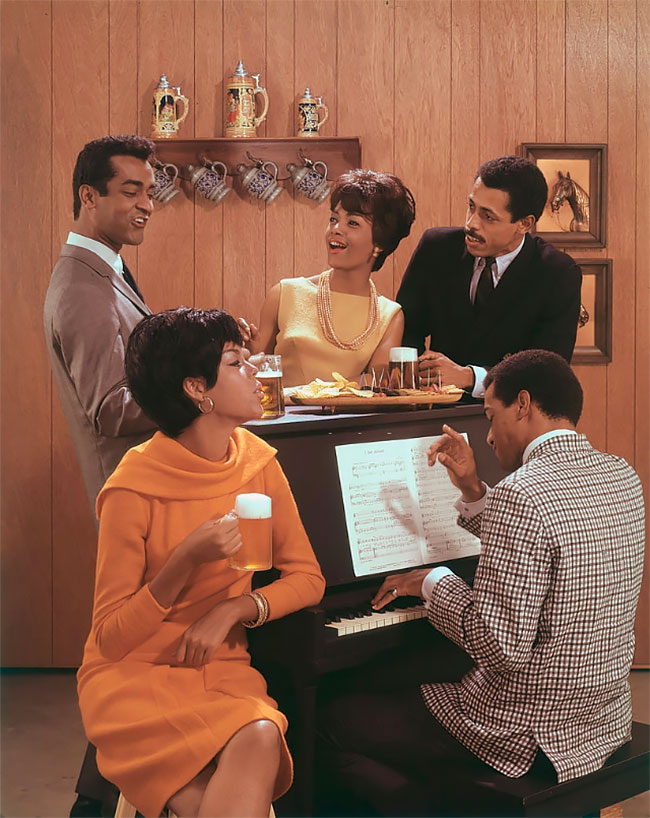 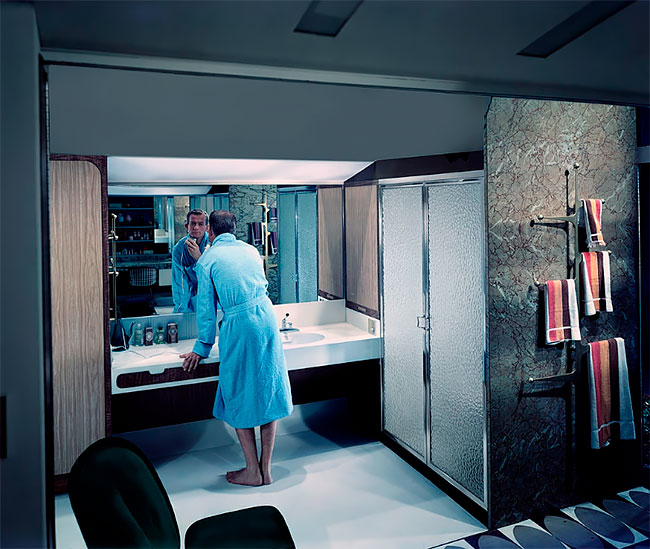 Two male surfers stand facing the ocean, holding their surfboards vertically beside them, while watching other surfers on the water, California, 1965. 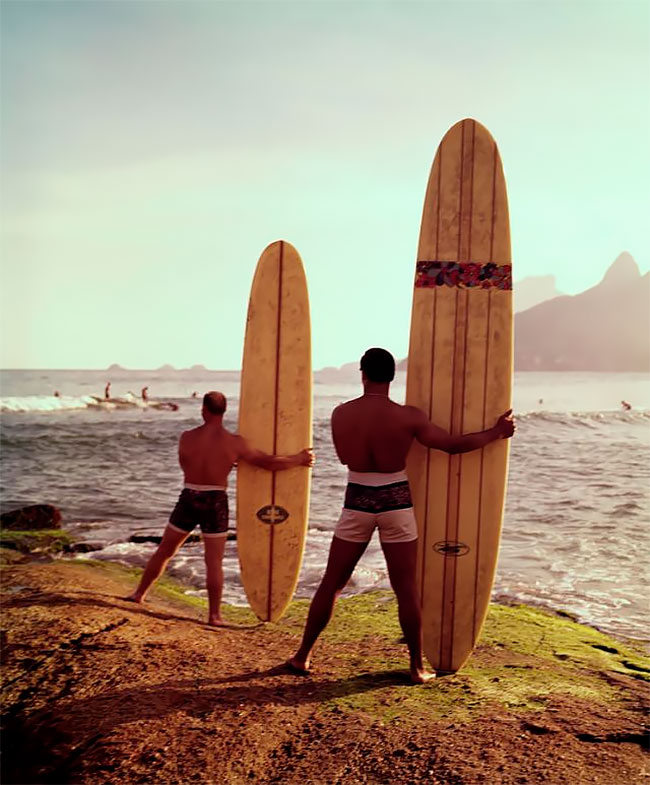 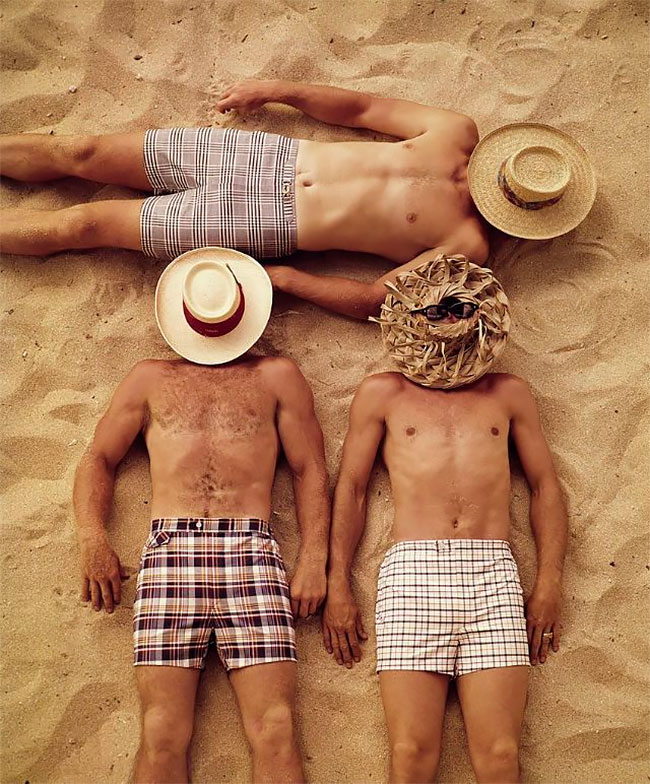 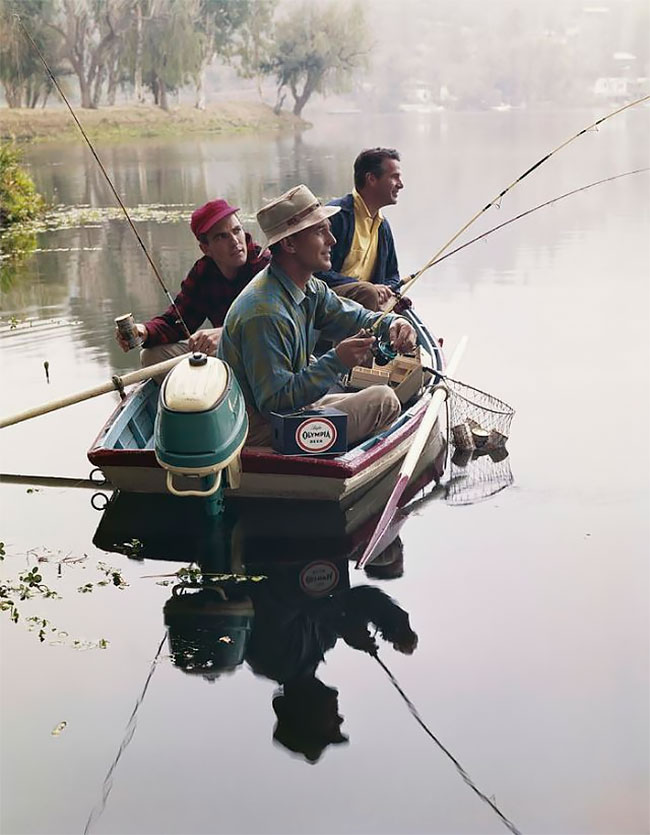 A young woman in a yellow bikini top holds up a tall glass of beer as she leans back in a small sailboat, watched intently by a man in a captain’s cap and a t-shirt, 1960s. 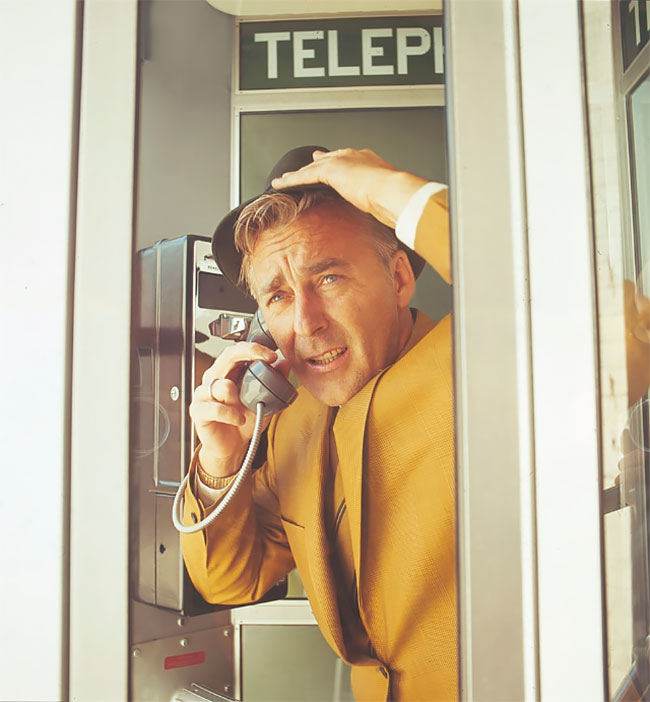 Three men of differing heights, all dressed in tuxedos and all drinking margaritas underneath a large painting of a margarita mounted against a blue velvet curtain, 1960s. 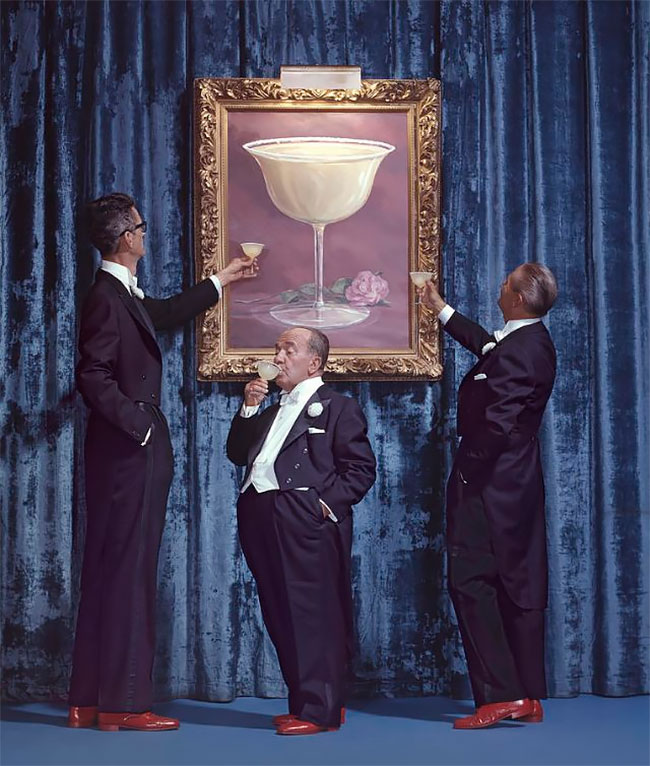 A group of young people cluster around their sand buggy to drink juice straight from a watermelon, 1966. 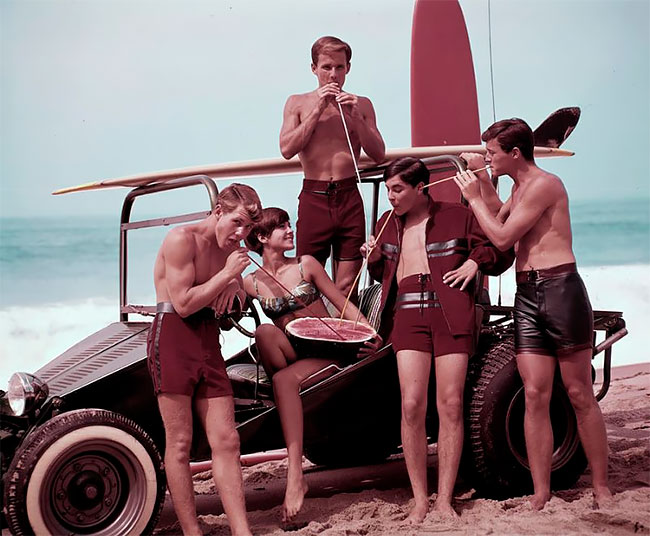 A woman and two children, a boy and a girl, smile ecstatically as they sit at a picnic table and eat from cans of Hunt’s brand snack peaches, November 1966. 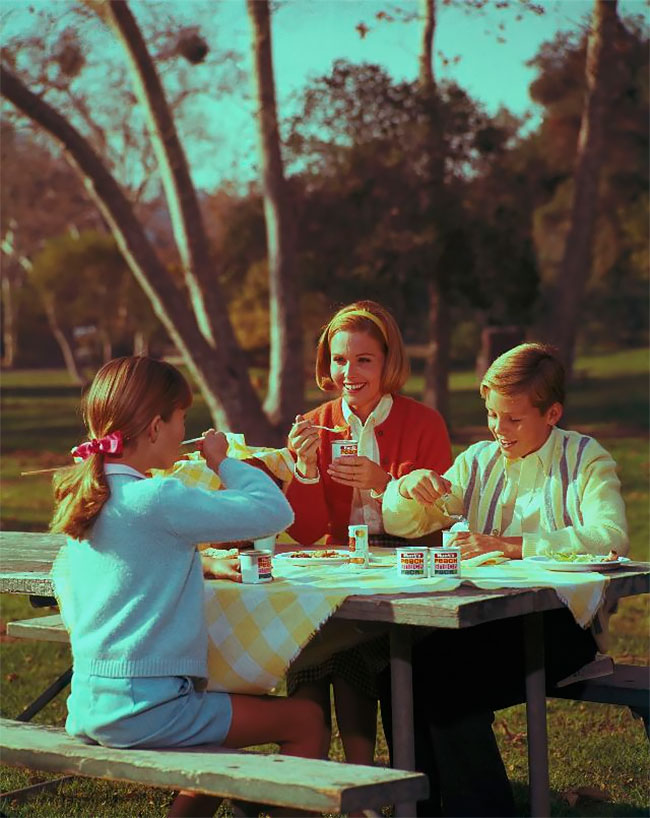 A small boy, wearing a baseball mitt, smiles while hugging his pet dog, 1967. 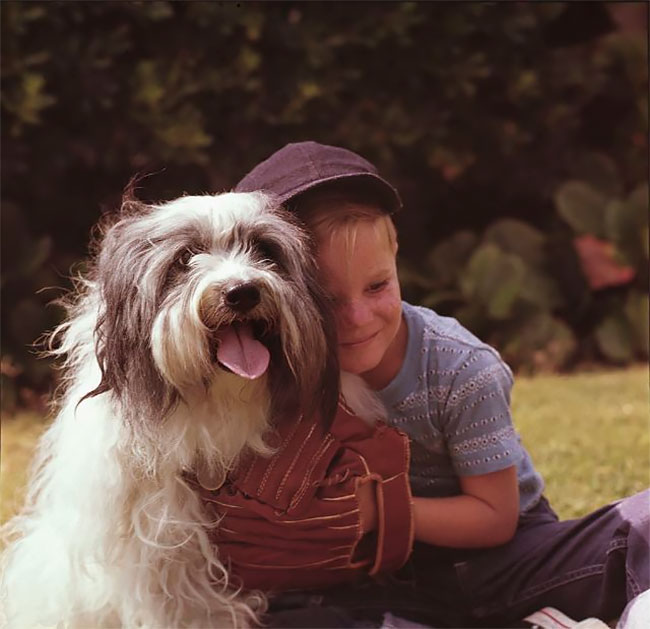 A couple rests under the shade of a tree, while picnicking by a lake, 1968. Sandwiches and other foods are laid out on a red checked blanket, and a cooler is visible. 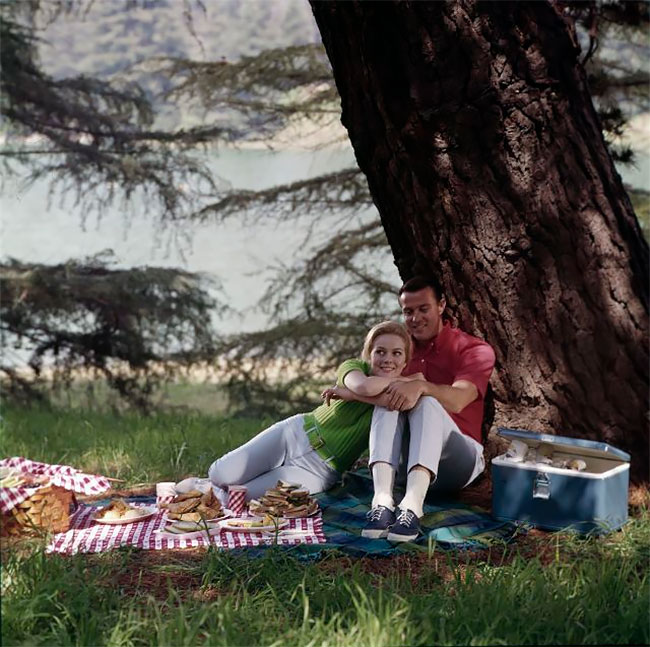 With his golf clubs propped against the wall of a glass phone booth, a model in a sweater and golf cap smiles as he listens on the telephone, June 1968. 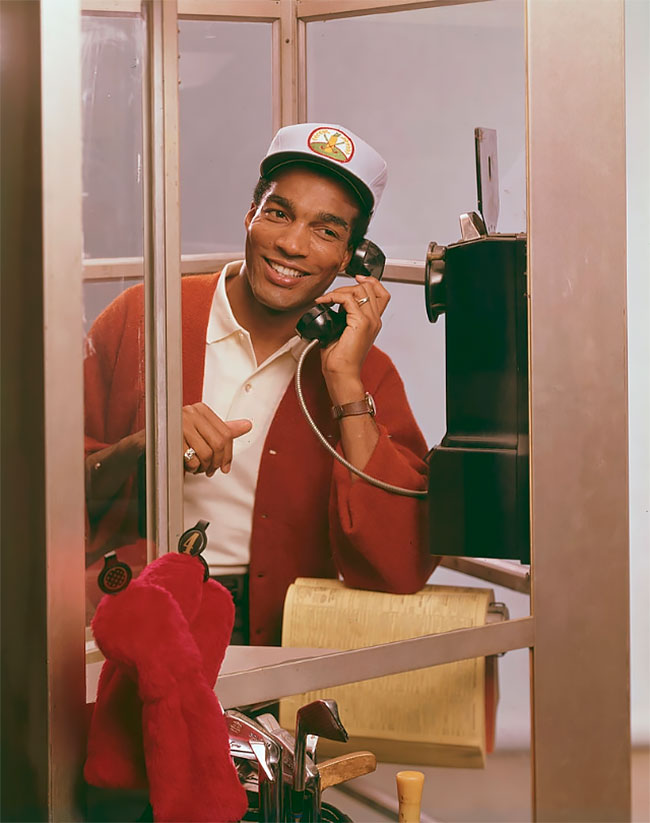 A young woman in a pink and orange dress lies on the floor and watches an episode of ‘The Honeymooners’ on a console television set, late 1960s or early 1970s. 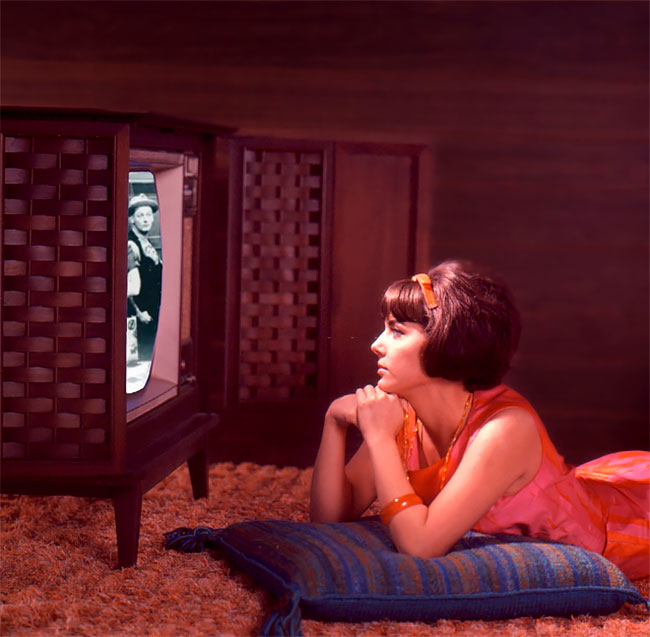 Businessman hails a cab at an airport taxi stand while a porter minds luggage in the background, early 1970s. 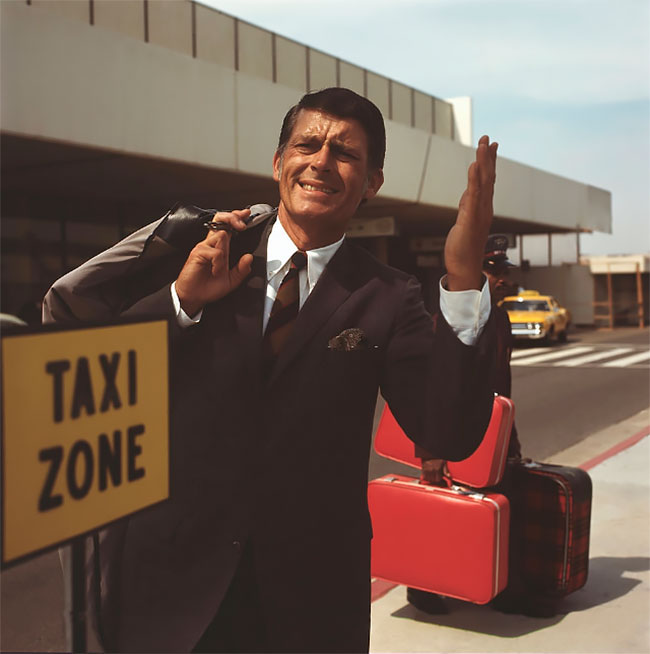 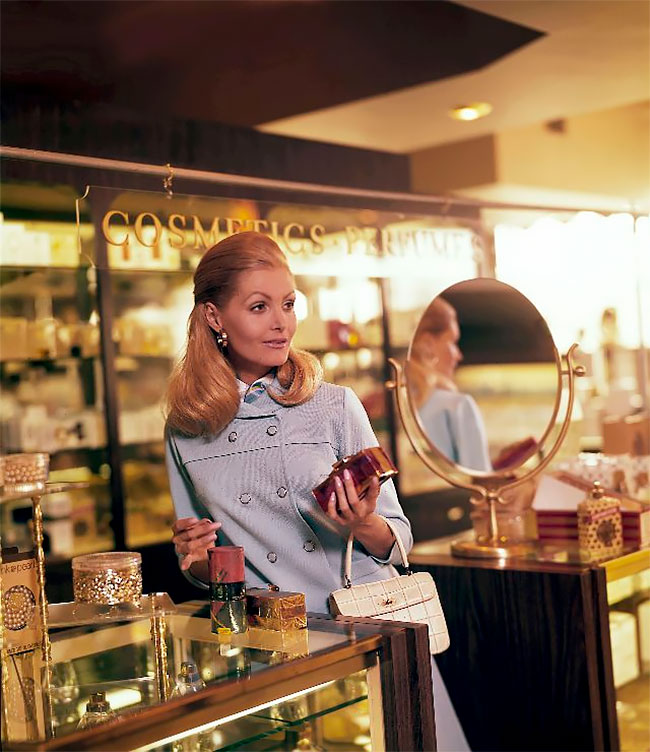 A group of friends in a bar gather around a table for conversation and drinks, 1978. 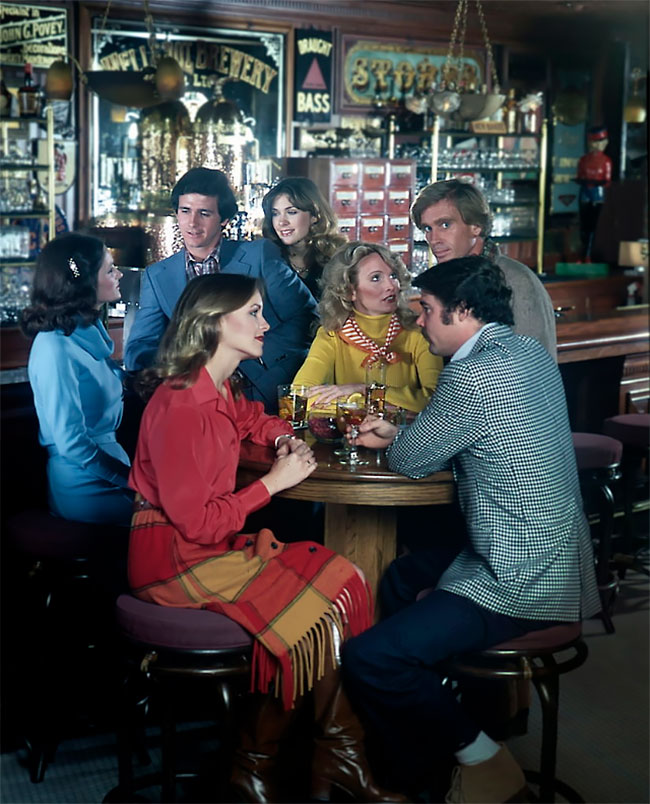 Medical workers and nurses in a computer room with early IBM computer, 1980. 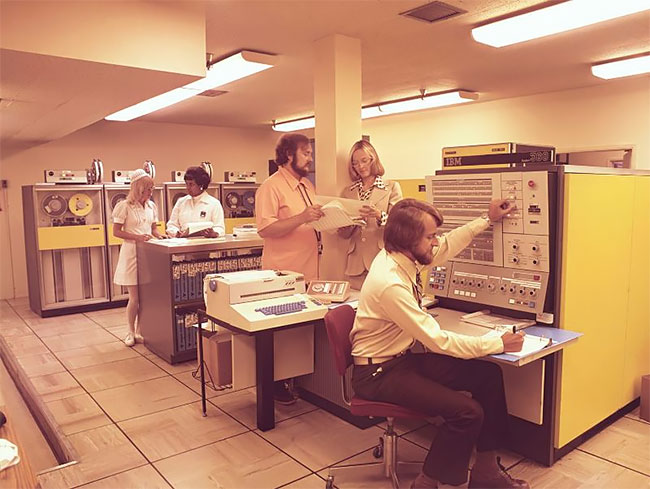 A couple with a Honda CVCC and a moped in their driveway, 1980. 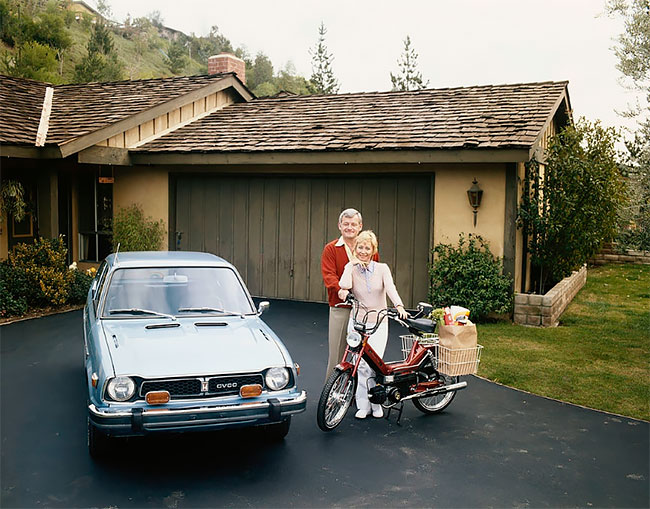 A couple smile at each other, they are sitting on a Harley-Davidson FLSTC Heritage Softail Classic motorcycle, 1980s. The car behind is a 1957 Chevrolet Bel Air convertible. 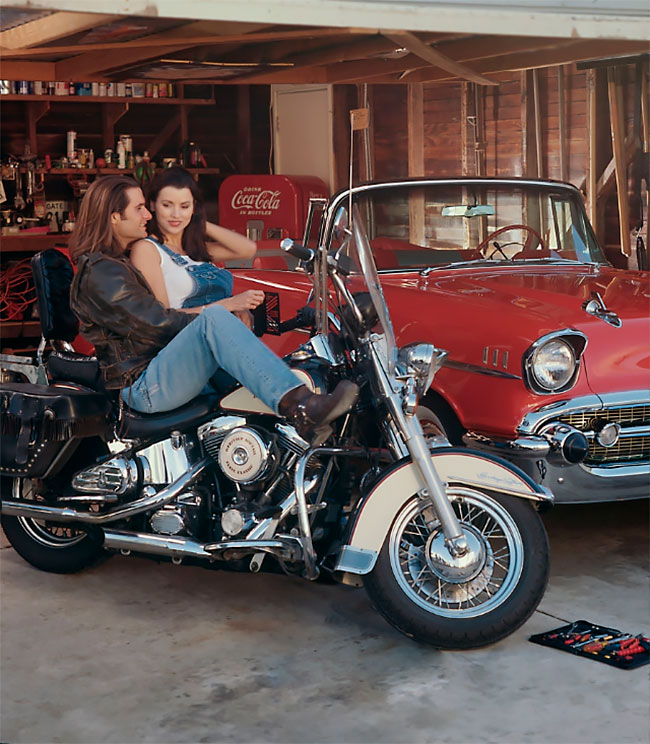 Brazilian Photographer Captures New York City Winter In Black And White
Amazing Vintage Photographs Of Cat's Meat Sellers In London In The Early 20th Century
Shortlist Photographs Of The 2020 Bird Photographer Of The Year Competition
A Photographer Is Using A Unique Method To Show The Shift From Day To Night Across Famous Cities In Spectacular Images
Stunning Vintage Photos Show The Beauty Of African-American Women From Between 1920s And 1940s
Stunning Photos Showing NYC Subway Cars Being Dumped Into the Ocean
Beautiful Ethiopian Headwear Made From Your Trash
Photographer Takes Funny Pictures Of Herself And Her Dog In Silly Costumes
Cinematic And Moody Portrait Photography By Ryan DeKorver
Supercool Pics Of Bugatti Cars In The 1920s And 1930s
Japanese Instagrammer Performs Bicycle Tricks On One Wheel
Canadian Photographer Shows Life In The Chernobyl Exclusion Zone Today
Photographer Amanda Jones Shows A Dog’s Love Is Timeless
"Wilhelm Brasse’ Mugshots": Photographer Took Up To 50,000 Chilling Photos In Auschwitz For The Nazis During World War II
Beautiful Flower Photography By The Polish Photographer Barbara Florczyk
“Got Toddlered”: This Humorous Instagram Account Shows Parents Before And After Kids
Photo of the Day: Let's Go Shopping!
Coco Rocha By Craig McDean
Wonderful Color Photos Of American People In The 1950s
Night And Day: Striking Street Photography In Japan By James Takumi Shyegun
Never Before Seen Photos of Bruce Lee From The Family Archive
Minimalist And Cinematic Drone Photography By Simeon Pratt
Two Spain-Based Photographers Playfully Interact With Geometry Of Architecture In These Images
NASA Just Released Some Absolutely Spectacular New Photos Of Jupiter
commercial, retro, stock

Incredible Colorized Photos Show What Life of the U.S. Looked Like in the 1930s and ’40s
Evocative Photographs Of London In 1969
Beautiful Black And White Portrait Photography By Daria Pitak
Scenes From A Tiny World Where Everything Could Happen: Photograher Turns Everyday Objects Into Fun Miniature Worlds
The Fifty Fifty Selfie Barber Shop
Cinematic And Cyberpunk Urban Photography By Felipe OA
Remarkable Behind-The-Scenes Photos From 'Back To The Future' That Will Bring You Back To The '80s
Alex Prager's Hyperreal America In Photographs
"Mersey Paradise": Photographer Tom Wood Spent Decades Photographing The Pubs, Clubs And Bus Rides Of Liverpool – And The People Who Inhabited Them
Photographer Creates A Magical World For Her Children Within Her Photo
2007 ‒ 2022 by Design You Trust. Proudly hosted by WebHostingBuzz.
Privacy Policy · Terms of Service · Content Removal Policy ❤️ 🇺🇦