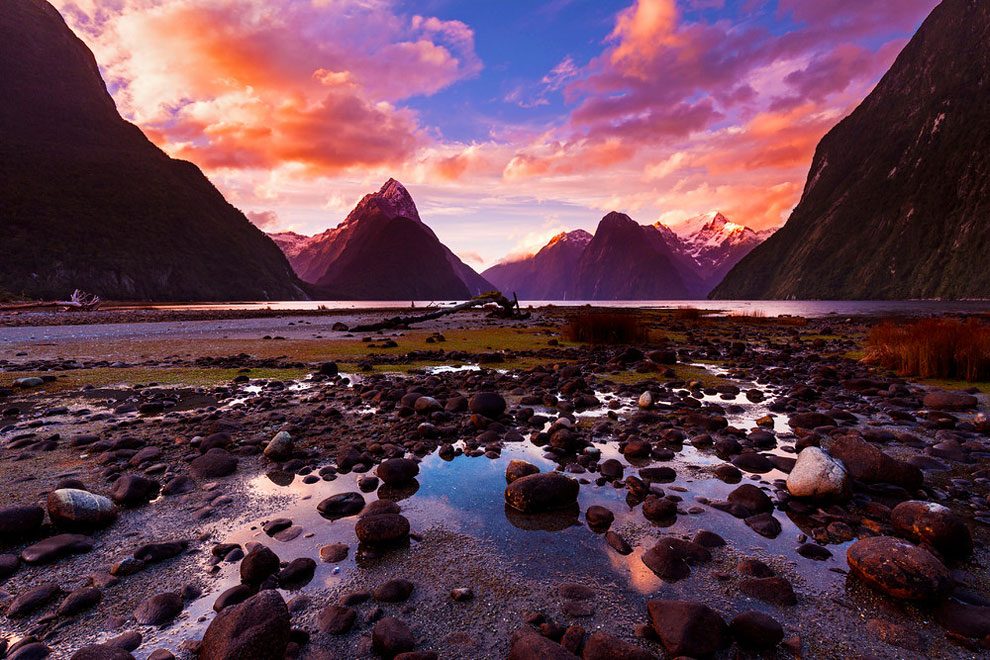 Milford Sound, perhaps New Zealand’s most famous scenic location, was long overlooked by early sailors and explorers, who didn’t realise the narrow entrance concealed an enormous and beautiful interior. It wasn’t discovered by Europeans until 1812. Named the eighth “wonder of the world”, its actually one of the wettest places on Earth, with rainfall creating cascades of waterfalls, some reaching a 1,000m in length. (Photo by Tom Walker/BBC Pictures/The Guardian) 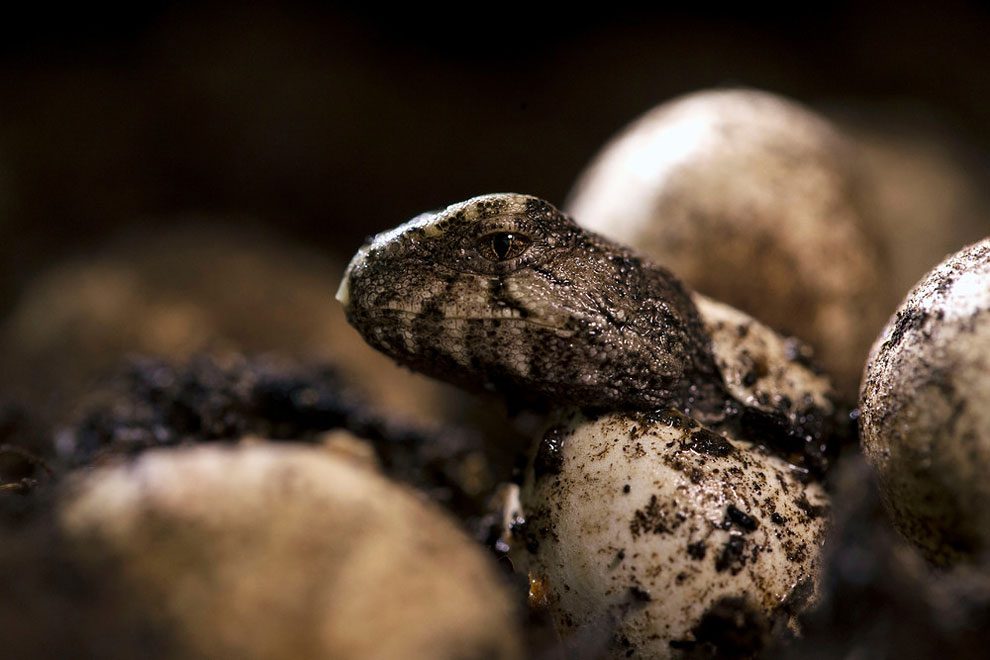 Tuatara hatch after one of the longest incubations of any reptile. Hatchlings clamber out from an underground egg chamber which their mother dug around 16 months ago. (Photo by Christina Karliczek/BBC Pictures/The Guardian) 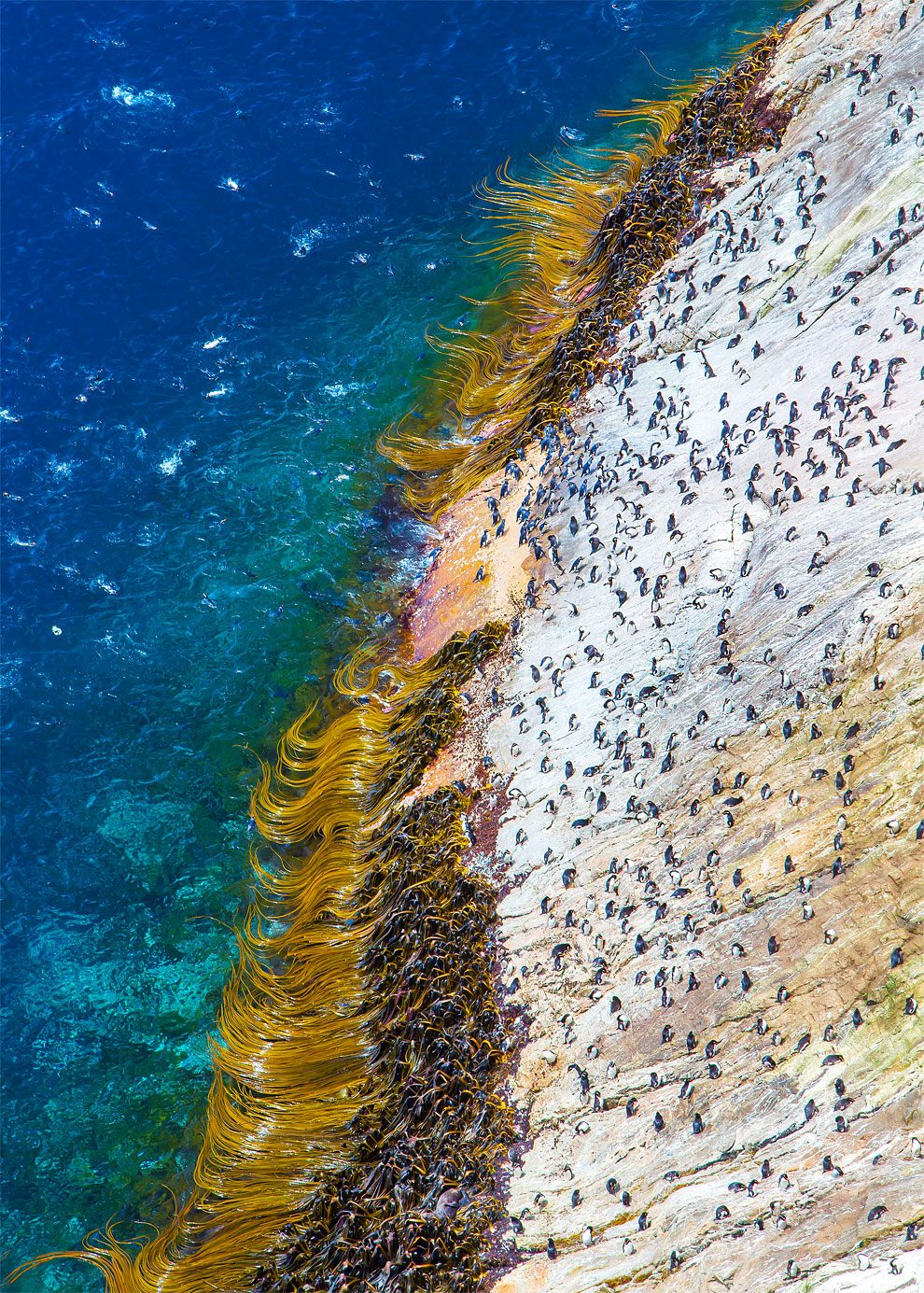 Steep cliffs reaching heights of up to 130m define the coastlines of the Snares Islands, making it an arduous climb for the penguins that breed there. (Photo by Mark Macewen/BBC Pictures/The Guardian) 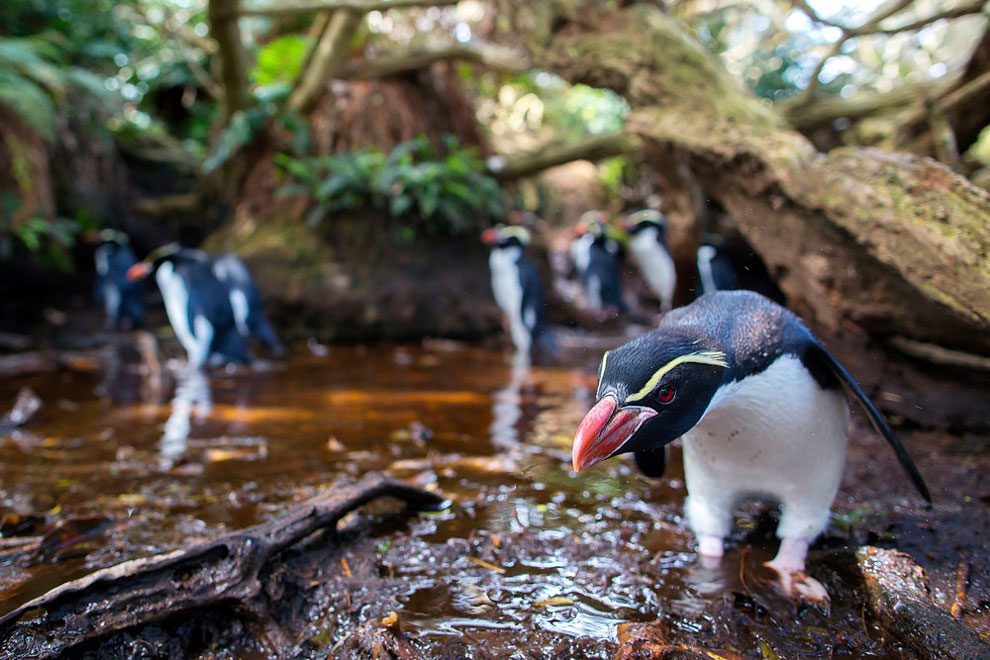 Snares penguins have carved out a labyrinth of well-trodden paths through the forest to their nest sites, creating the unique spectacle of streets of penguin commuters in what looks like a dwarf jungle. The gnarled trunks they walk under are unusual too as they belong to trees of the daisy family. (Photo by Mark MacEwen/BBC Pictures/The Guardian) 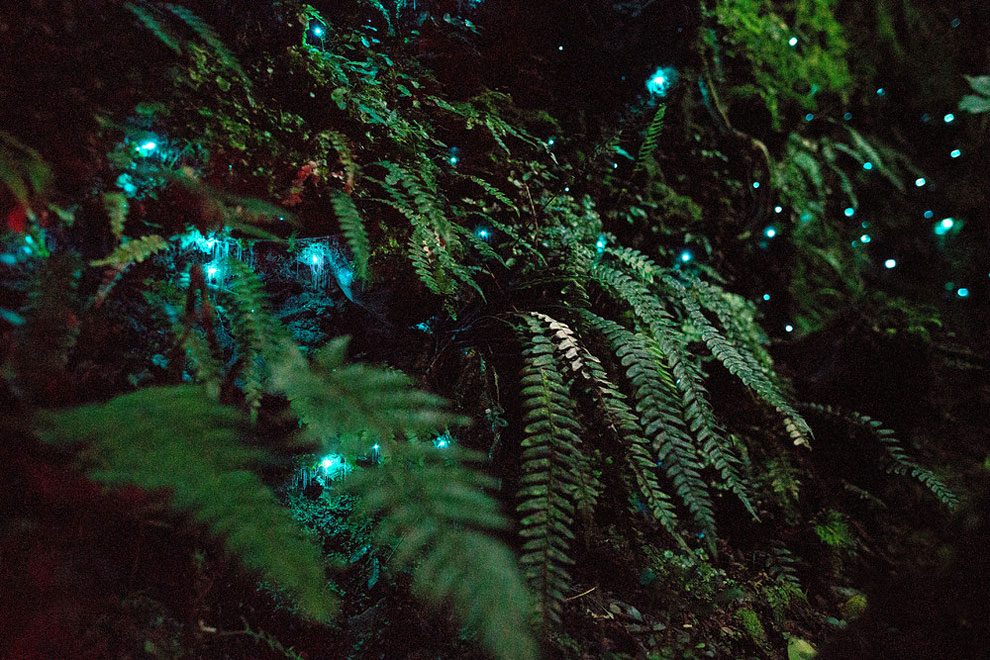 Glow-worms are the larvae of a species of fly called a fungus gnat. Up close, they are worm-like in appearance and use their lights to attract flying insects into a trap of sticky threads. (Photo by Alex Hasskerl/BBC Pictures/The Guardian) 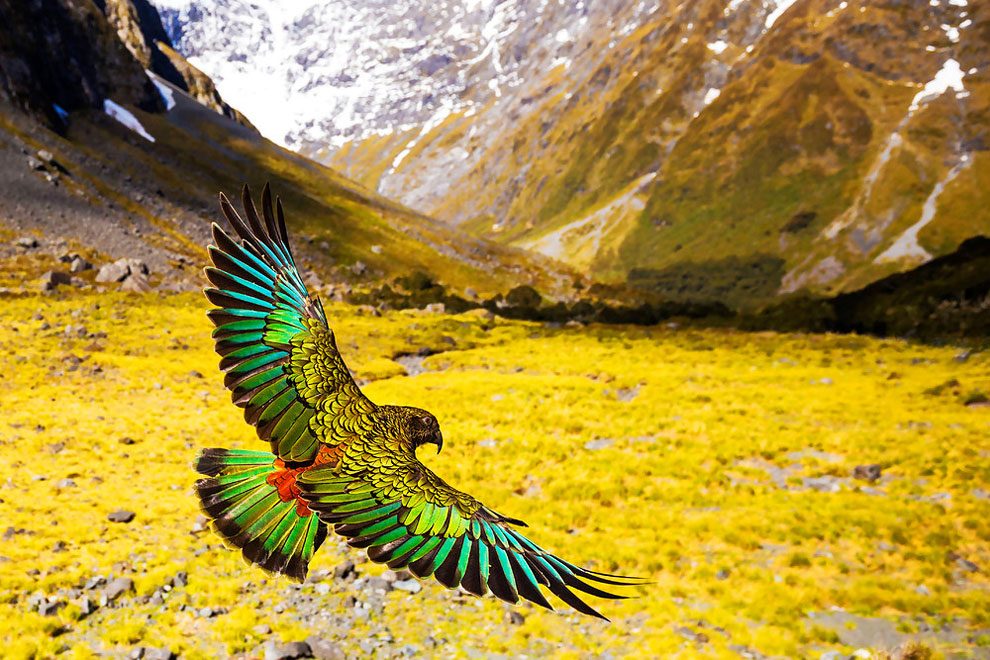 Kea are the only true alpine parrots in the world and thrive as cunning opportunists in the freezing conditions of the Southern Alps. Kea are thought to have developed their wide array of food-finding strategies during the last great ice age, where they learned to adapt using their unusual powers of curiosity. (Photo by Tom Walker/BBC Pictures/The Guardian) 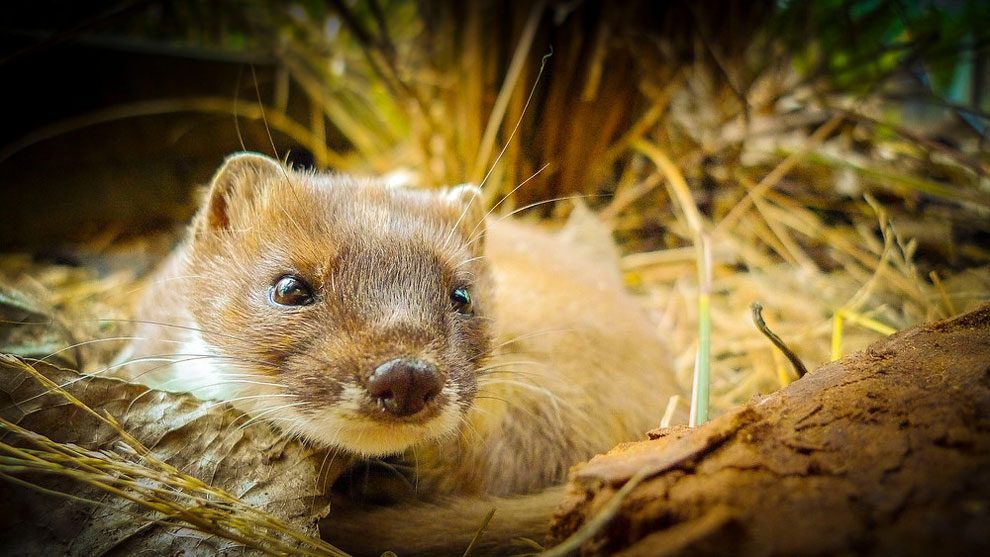 Nimble and agile climbers, stoats hunt by following their nose at any time, day or night, requiring nearly a quarter of their body weight in prey on a daily basis. Stoats were introduced to New Zealand in 1883, many coming from Lincolnshire in the UK. (Photo by Nick Easton/BBC Pictures/The Guardian) 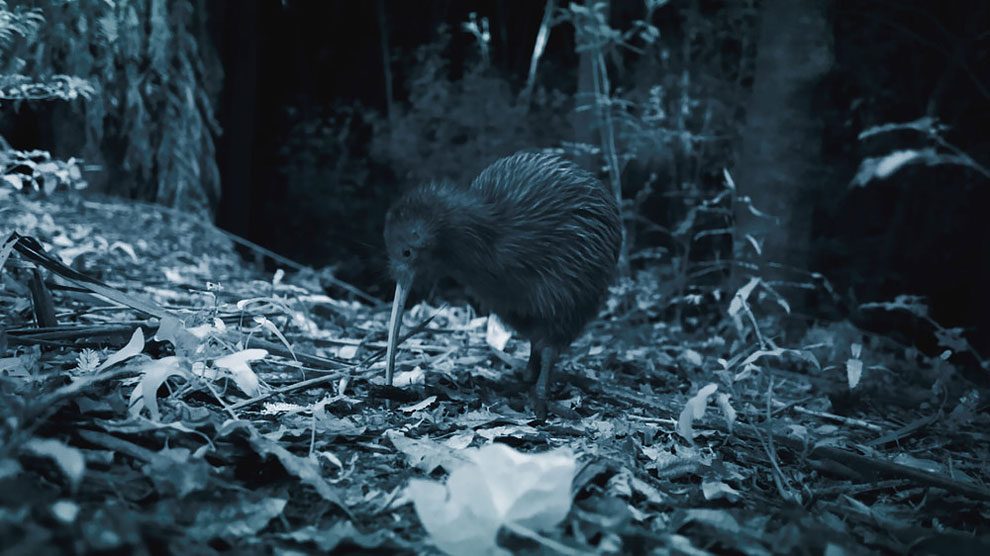 A kiwi lays an enormous egg which takes up about 20% of the mother’s body weight- a human baby takes up only 5% in comparison. The unique bird also has nostrils at the tip of its bill, enabling it to sniff out invertebrate prey underground. Around the same size and shape as a stout chicken, a kiwi is in fact related to the ostrich. (Photo by Screen Grab/BBC Pictures/The Guardian) 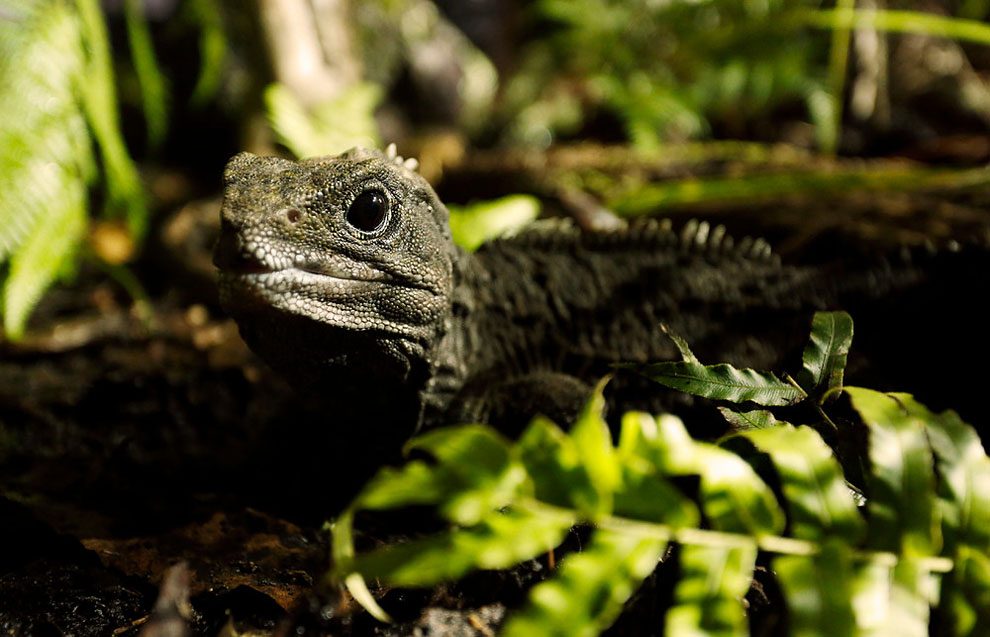 The sole surviving member of an ancient lineage of reptiles which flourished on Earth during the Jurassic period, tuatara are uniquely specialised to the temperate climate of New Zealand. (Photo by Claire Thompson/BBC Pictures/The Guardian) 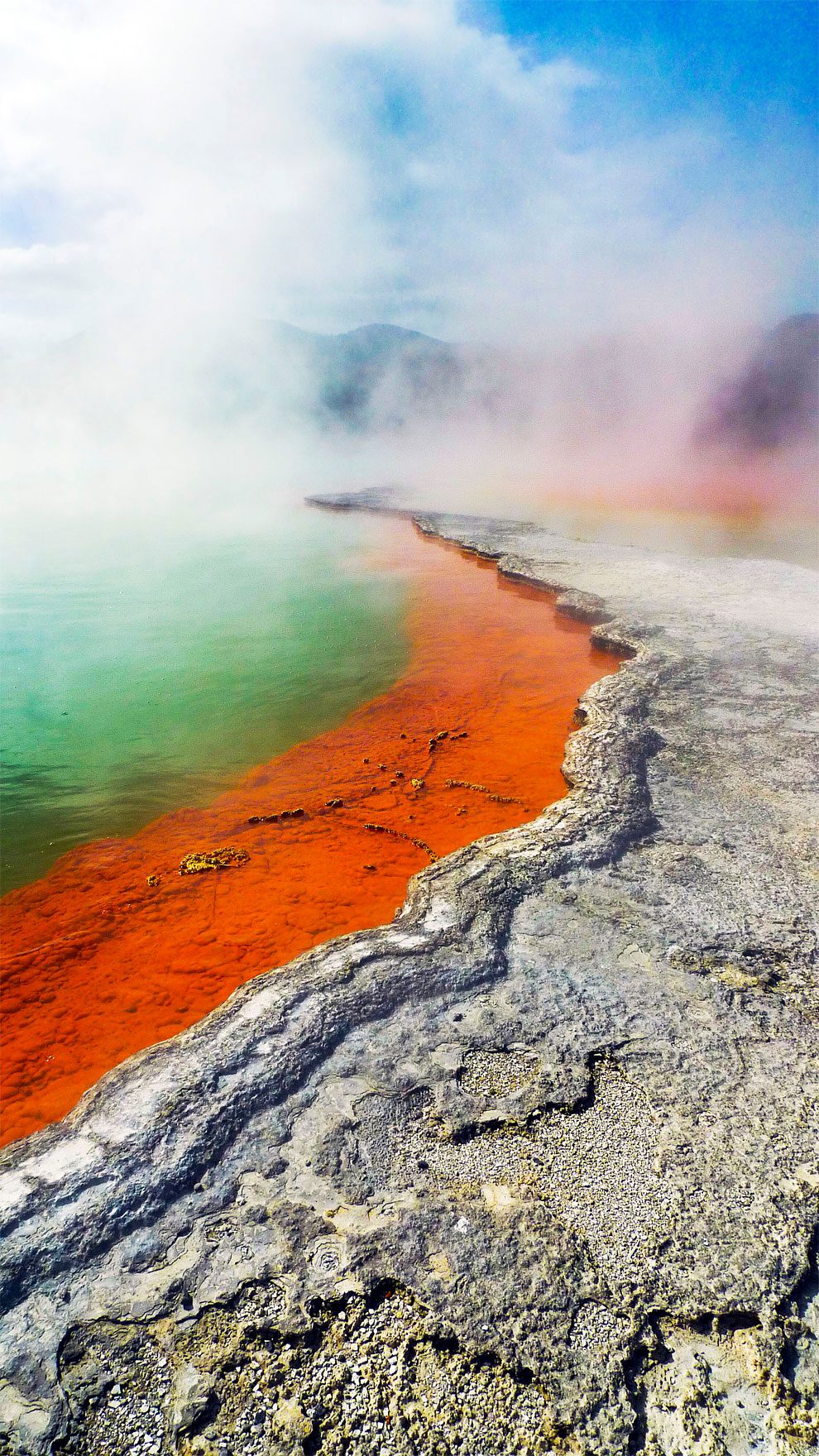 Named after its constant fizzing of carbon dioxide bubbles reminiscent of champagne, “Champagne pool” is one of New Zealand’s most well-known geothermal features. Despite it being 900 years old, it’s relatively young for a hot spring and gets its distinctive orange colour from toxic mineral sulphides. (Photo by Nick Easton/BBC Pictures/The Guardian) 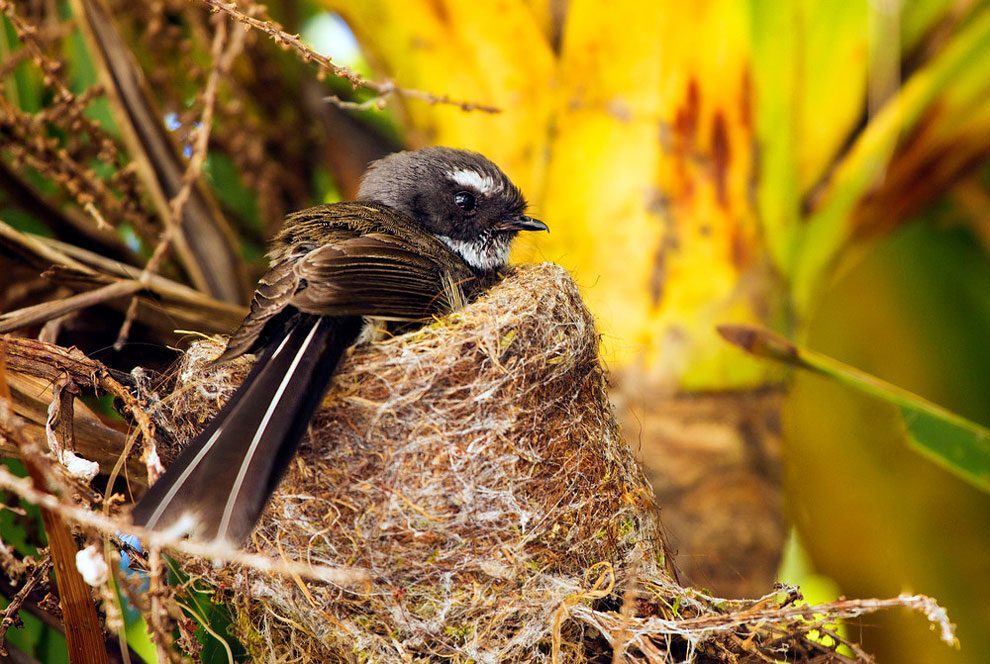 Fantails are some of New Zealand’s smallest and most agile birds, surviving in some of the most toxic and corrosive environments in New Zealand. (Photo by Tom Walker/BBC Pictures/The Guardian) 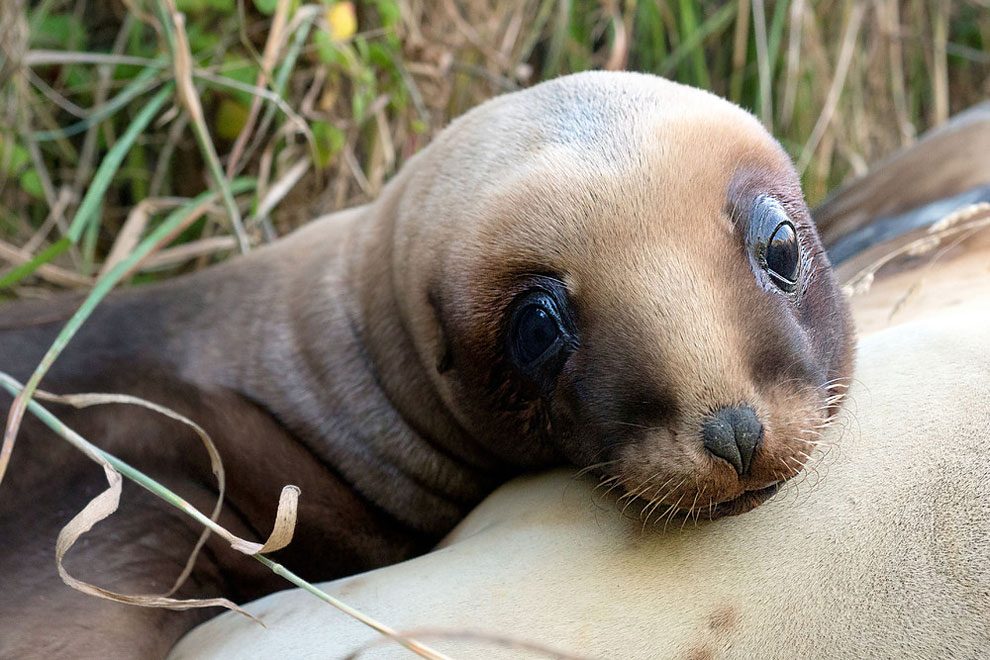 New Zealand’s sea lions are one of the rarest and most threatened sea lions in the world. In 1993, a single female nicknamed “Mum” recolonised the mainland after being absent there for the last 100 years. Now most of the mainland population are her direct descendants. (Photo by Christina Karliczek/BBC Pictures/The Guardian) 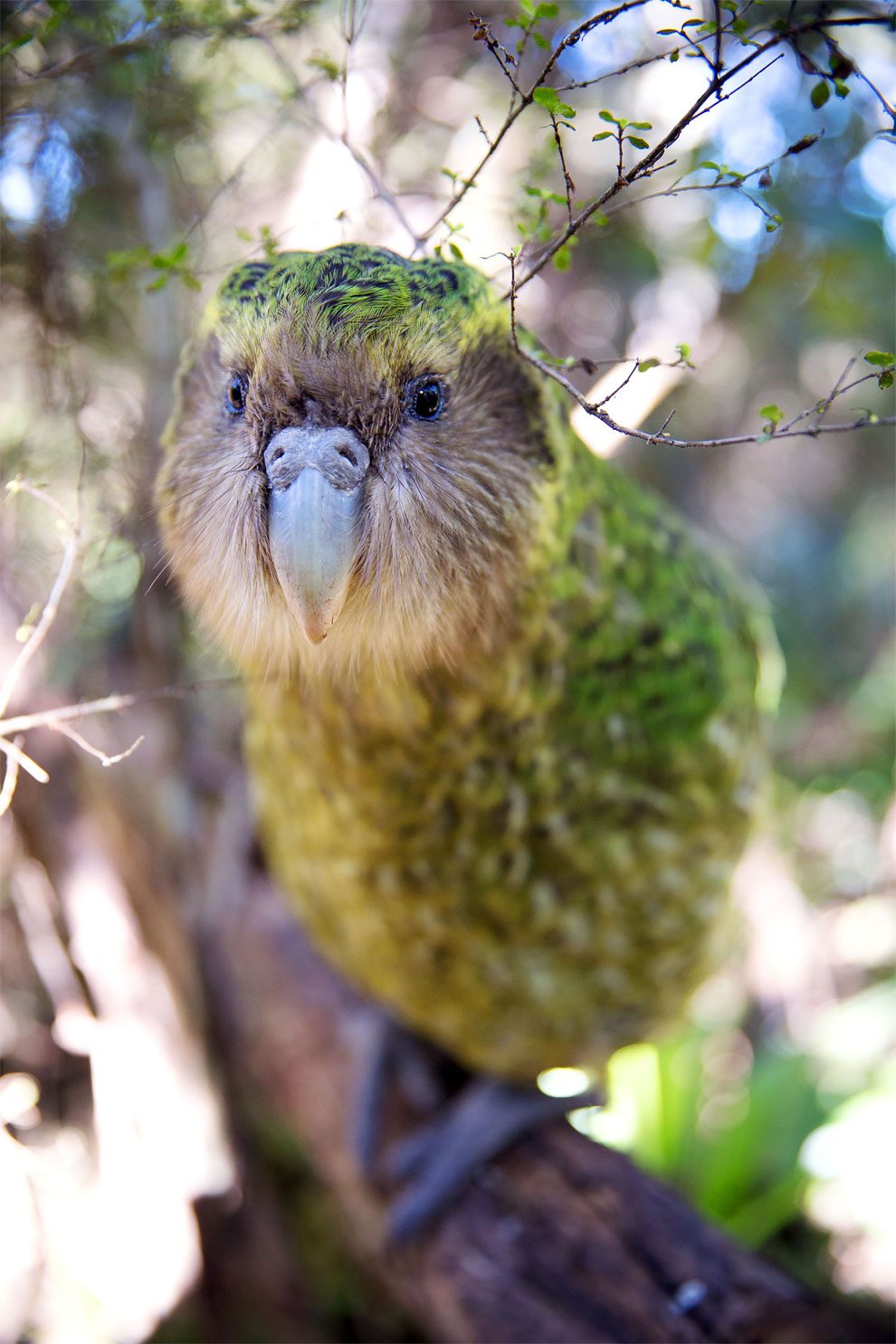 Sirocco is a kakapo, a large nocturnal parrot, who has his very own Facebook page with more than 170,000 likes. (Photo by Holly Wallace/BBC Pictures/The Guardian) 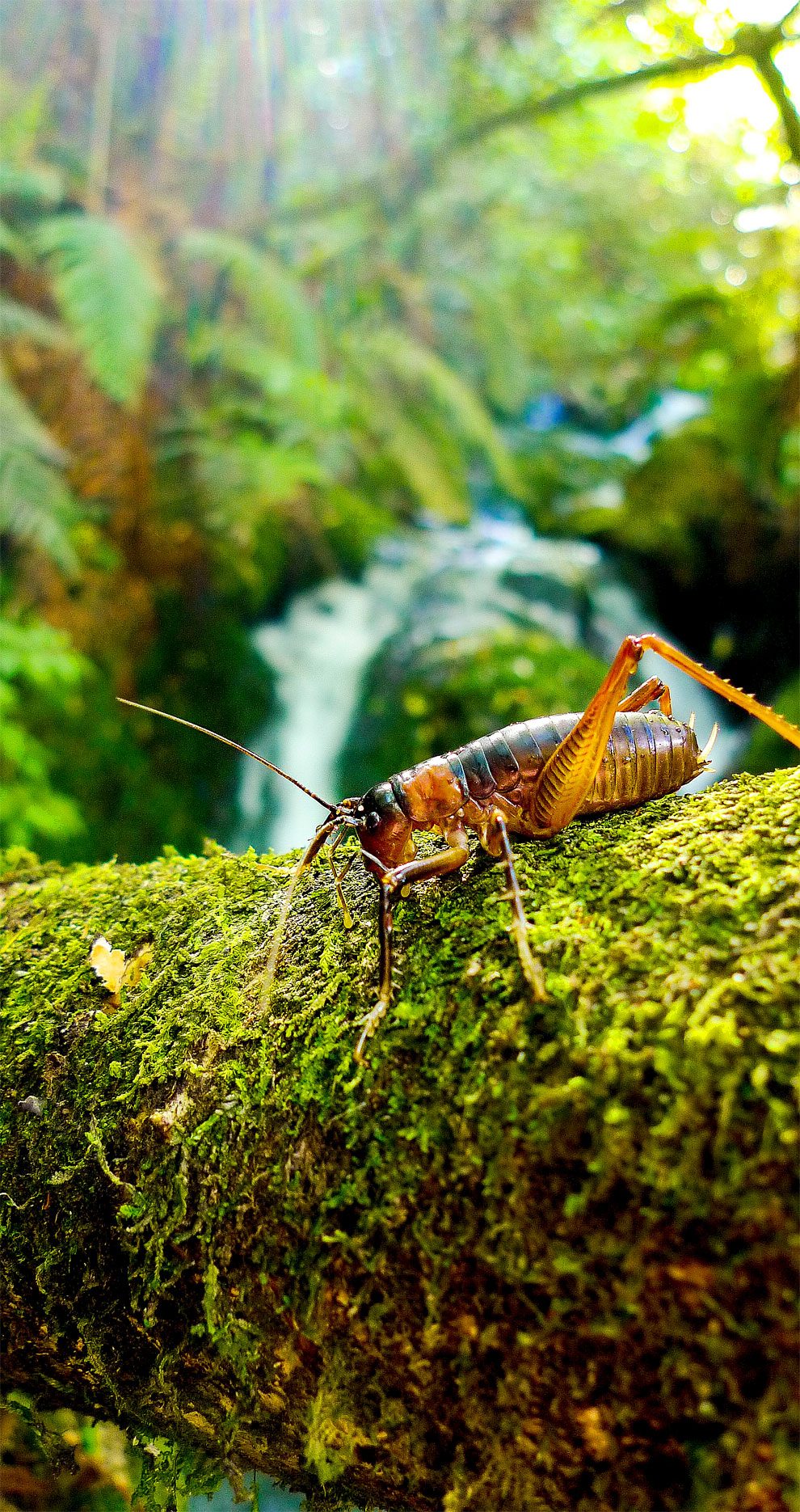 This species of tusked weta can grow up to 3.6cm in length. In a land over-run with land-based predators, its ingenious strategy to escape danger has proved very useful. It jumps into water and can hold its breath for more than five minutes – enough time for predators to give up and move on. (Photo by Nick Easton/BBC Pictures/The Guardian) 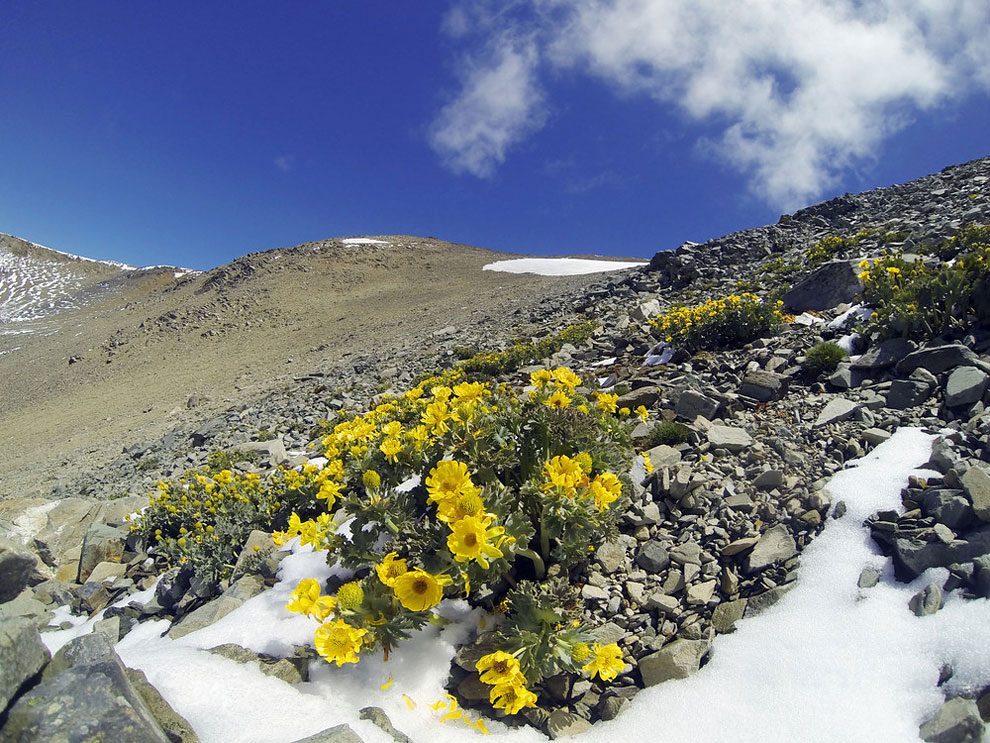 One of the highest-living buttercups in the world, this species is a scree-slope specialist which can only live at altitudes upwards of 1,500m. Specific to a few regions of the South Island, they bloom in the summer months. (Photo by BBC Pictures/The Guardian) 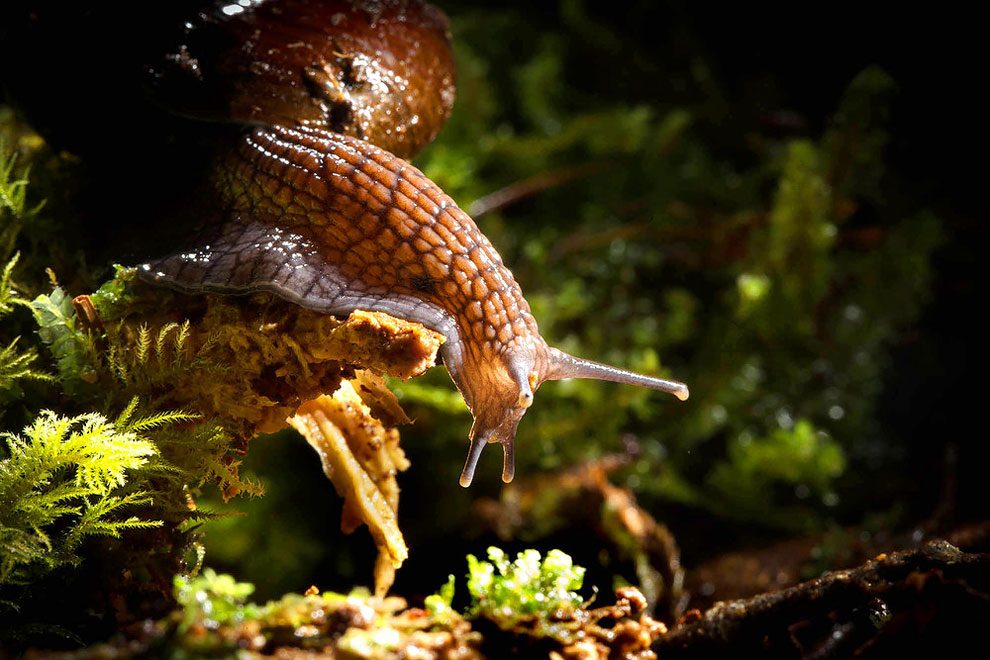 Carnivorous and capable of sniffing out prey in their mossy forest homes, these snails feed mainly on earthworms. (Photo by James Reardon/BBC Pictures/The Guardian) 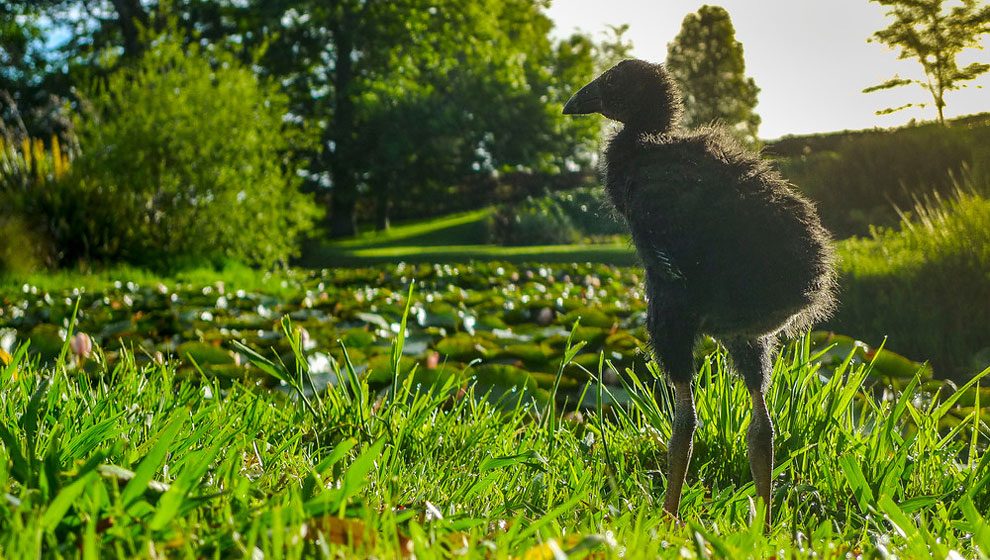 Pukeko chicks are raised in multi-parent families. Incubation of eggs is predominantly by the males, but all parents contribute to the care of young chicks. This can mean they hatch in a nest with up to 18 other siblings. (Photo by Nick Easton/BBC Pictures/The Guardian) 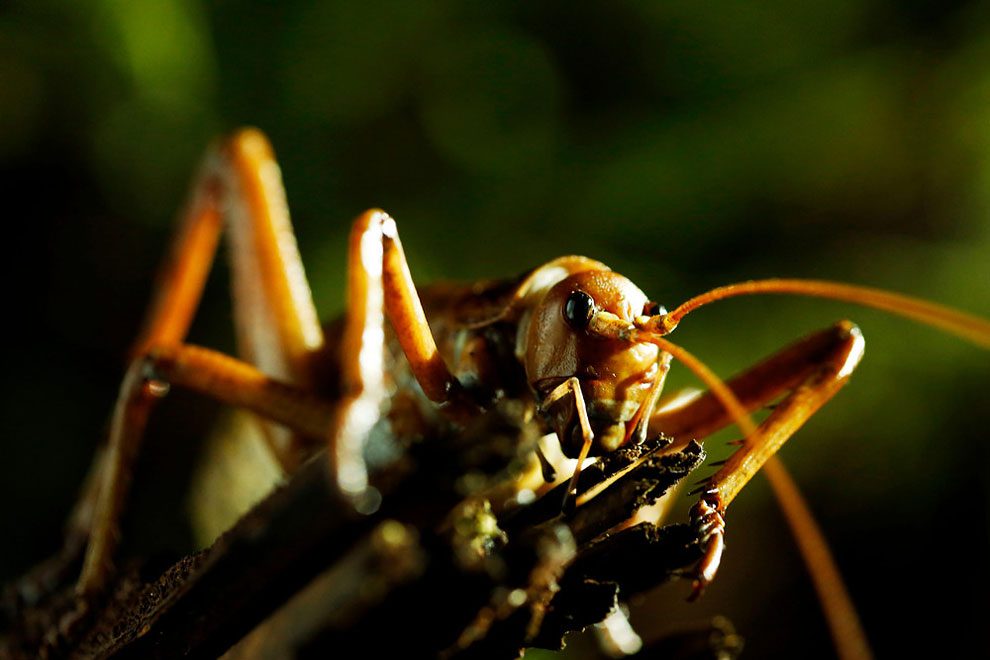 Giant weta are some of the heaviest insects in the world and a prehistoric speciality of New Zealand. They can weigh as much as a small bird. (Photo by Claire Thompson/BBC Pictures/The Guardian) 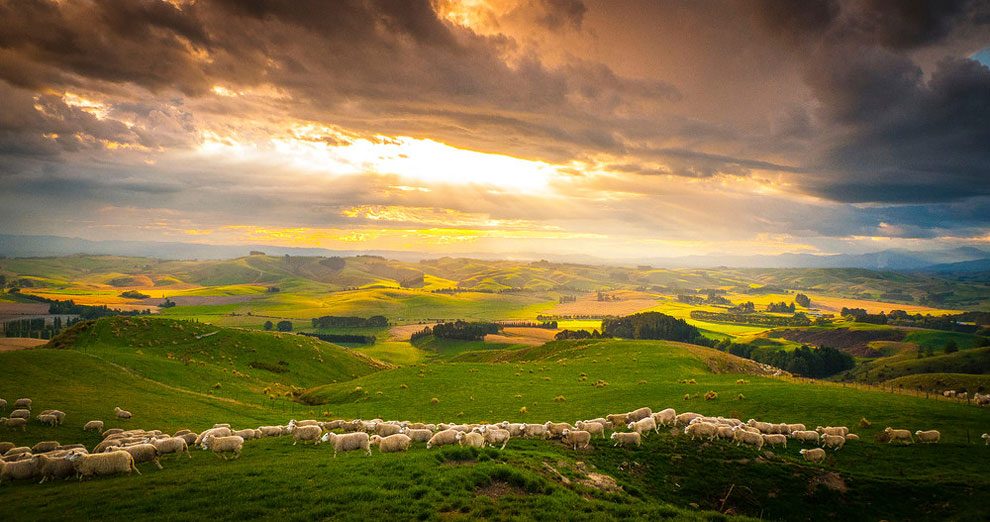 New Zealand’s first sheep were set ashore by Captain Cook in 1773. At their peak in 1982, there were 22 sheep for every person in New Zealand. Nowadays, the numbers have fallen by a third and are now estimated at just over seven sheep per person. (Photo by Nick Easton/BBC Pictures/The Guardian)

This Adventurous Couple Who Are Paid To Explore The World Will Give You A Serious Case Of Wanderlust
Probably, You Should Stay Inside This Big Idaho Potato
McDonald's Introduces Chocolate-Covered French Fries To Japan
Artist Joanna Hedrick Transforms Dead Leaves Into Beautiful Land Art Creations
2013 National Geographic Photo Contest, “Places”, Week 4
Honest Photo Facts That Will Help You Understand The Size Of The Earth A Little Better
Queen Mary 2's Captain Perches On The Bow Of His Vast Ship
In An Old Village In Southern Bavaria, A Unique Ancient Pagan Tradition Is Still Alive
Beautiful Kirsten Dunst As A Teenager In 1995
Surreal Abandoned Building From Kamchatka
50 Of The World's Best Breakfasts
Balloonists Take To The Skies To Launch The Bristol
Half A Century In The Making: Tree ‘Crop Circles’ Emerge In Japan
Ready to Move In? Mystery ‘Furnished Apartment' Found In Berlin Subway
Tokyo Hotel Launches Futuristic Lantern Dining to Beat Coronavirus
The International Flag of Planet Earth
Amazing Portraits Of Elspeth Beard, The First British Woman To Ride A Motorcycle Around The World
Japanese Photographer Has Created Amazing Panoramic Images Of The World's Largest Salt Flat In Bolivia
Book A Stay On Your Own Robinson Crusoe Island
The Abandoned Refrigerators of Katrina
Let's Discover Sweden's Icehotel Incredible Bedrooms Made Of Ice And Snow
Watch a Plane Take Off from This Runway in the French Alps
This 87-Year-Old Grandmother Creates Her Beautiful Artworks Using Microsoft Paint
Real Ice Carousel Made On A Frozen Lake Using A Chainsaw In Finland
beautiful, earth, islands, mythical, zealand