These are the most memorable underwater images from the prestigious Wildlife Photographer of the Year competition. They have been specially selected for this unique book from the hundred of thousands of images received over the last 50 years. The collection gives us a glimpse into an often unseen world containing many strange and beguiling creatures. Each image is accompanied by a story from the photographer, explaining what the image means to them and how they were able to capture it. This portfolio reveals a spectacular panoply of life, which is as diverse and colourful as anything found on land. 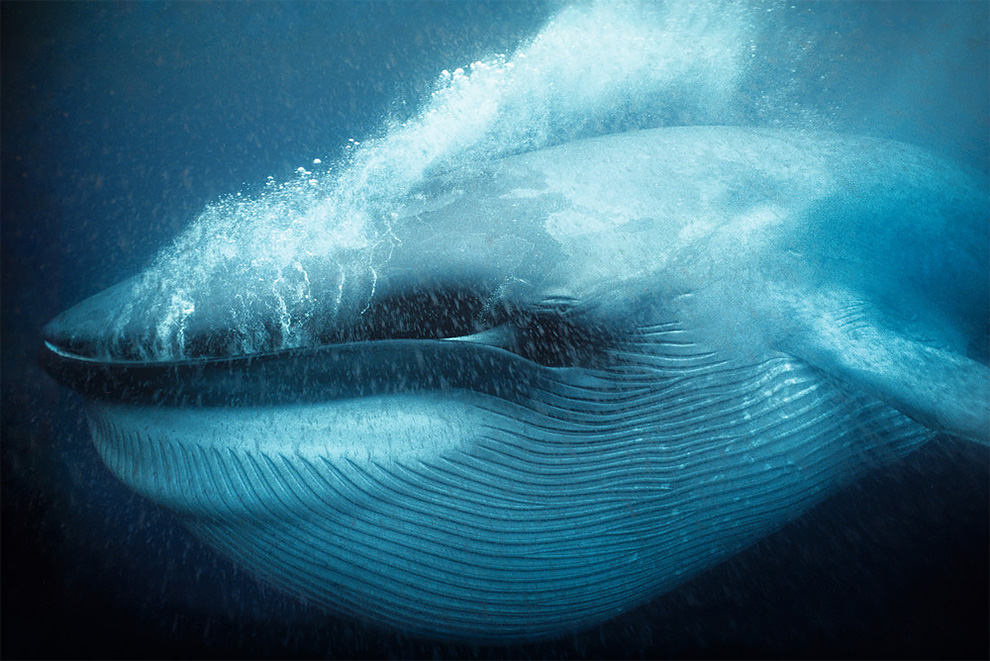 Big blue mouthful by Doc White. “This picture was the first ever to show, full frame, a blue whale with its throat pouch expanded, the pleats forced open by the engulfment of a gargantuan amount of water and shrimp-like krill. Having lunged through the krill swarm, the whale is expelling the water, forcing it through the massive sheets of hair-like baleen material, which hang from its mouth. To find large enough aggregations of krill, a blue whale is forced to travel great distances. But when a large swarm is located, the lunge-feeding technique is highly energy-efficient”. (Photo by Doc White/Unforgettable Underwater Photography/NHM) 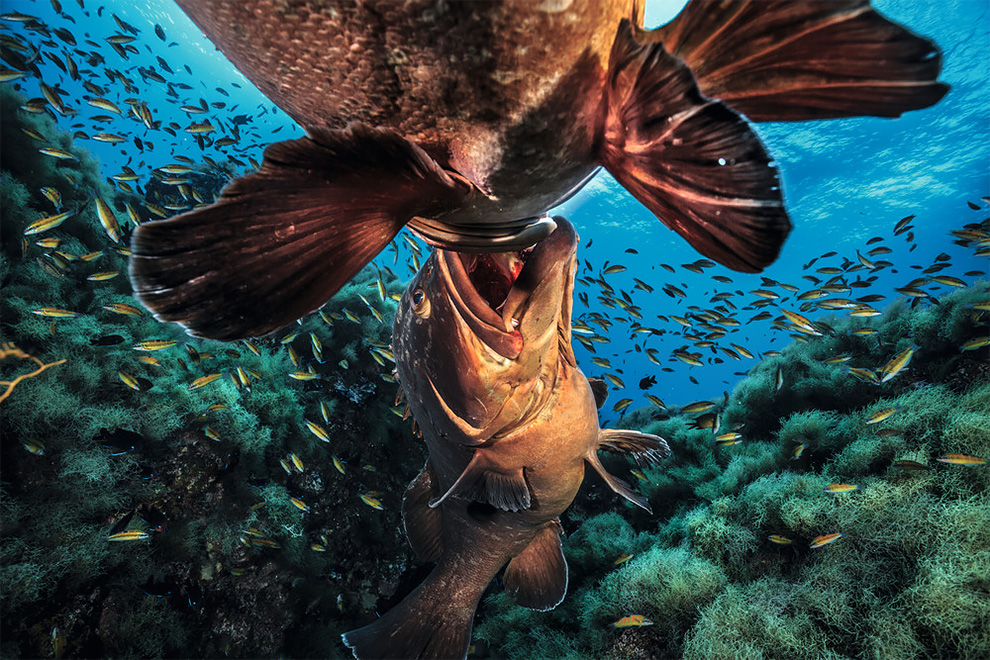 Big fish fight by Jordi Chias Pujol. “These two huge dusky groupers are in a violent struggle. The prize, overlying an undersea volcanic pinnacle off the Azores, is a strip of prime spawning territory into which the owner can attract females. It encompasses a rocky retreat, but the key aspect is that a strong current runs overhead – ideal for carrying away fertilised eggs. Males start out as females, but when they get to be 10-15 years old, and if there aren’t too many males around, they change sеx”. (Photo by Jordi Chias Pujol/Unforgettable Underwater Photography/NHM) 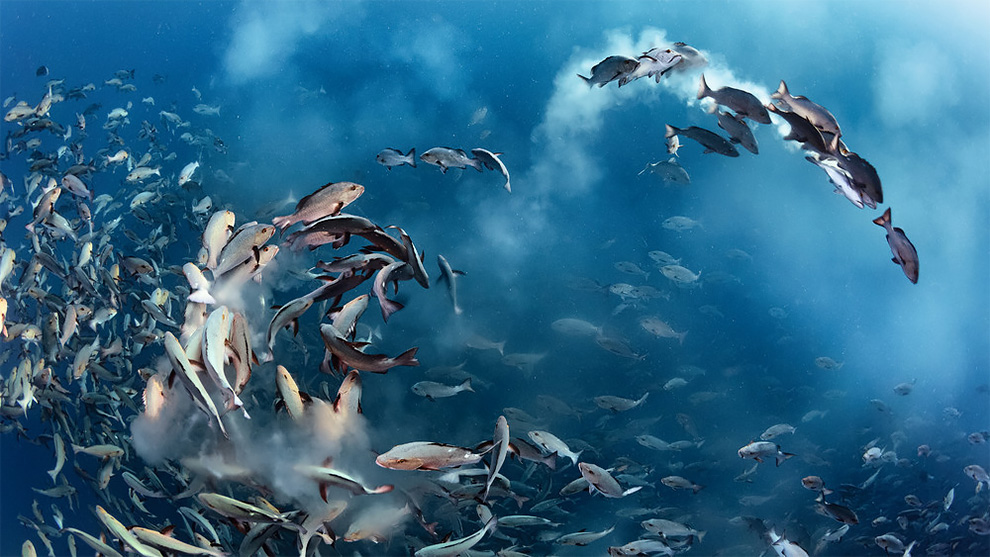 Snapper party by Tony Wu. “Sperm and eggs cloud the sea as a multitude of two-spot red snappers swirl in a fast-moving frenzy of synchronised spawning. It’s a drama that takes place over a few days each month off the Pacific island nation of Palau, coinciding with the full moon, when tidal currents are strong. These reef-dwelling snappers gather together to engage in an oceanic orgy that gives the normally solitary fish the best chance of successfully exchanging genes at a spot and time that gives the fertilised eggs the greatest probability of being swept into the open ocean”. (Photo by Tony Wu/Unforgettable Underwater Photography/NHM) 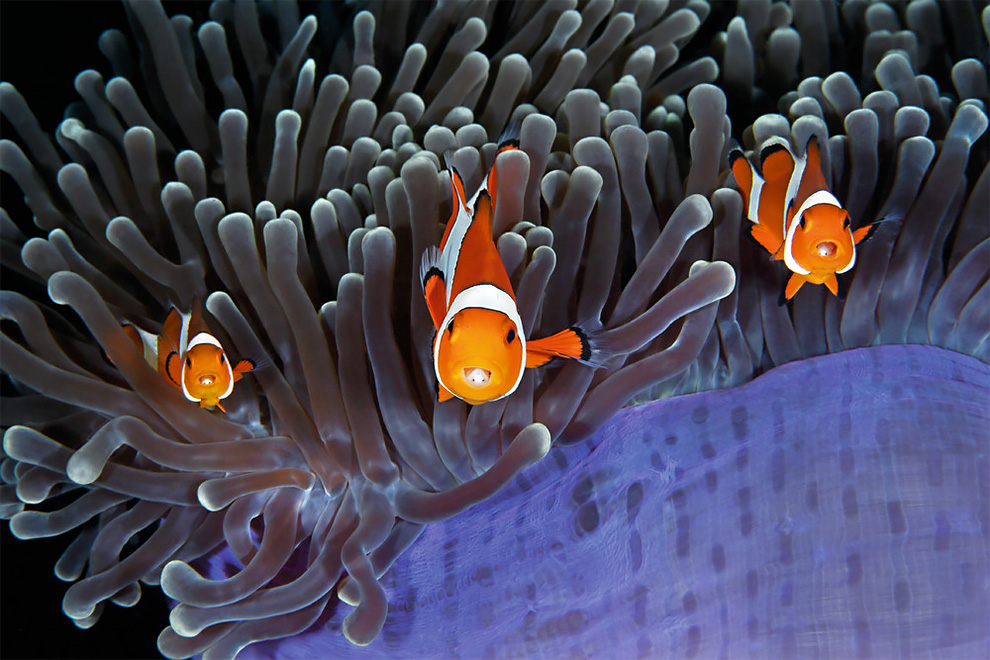 The insiders by Qing Lin. “Peeping out of the tentacles of a magnificent sea anemone, off North Sulawesi, Indonesia, are clown anemone fish. They live within the confines of the anemone, immune to its stings, thanks in part to a thick covering of mucus. The social arrangement is such that, not only does their host protect them, but they feed on debris among the tentacles and may even snack on a tentacle. In return, they eat parasites, may drive off harmful fish and aerate the water with their fins; it could even be that they attract fish which the anemone stings and eats”. (Photo by Qing Lin/Unforgettable Underwater Photography/NHM) 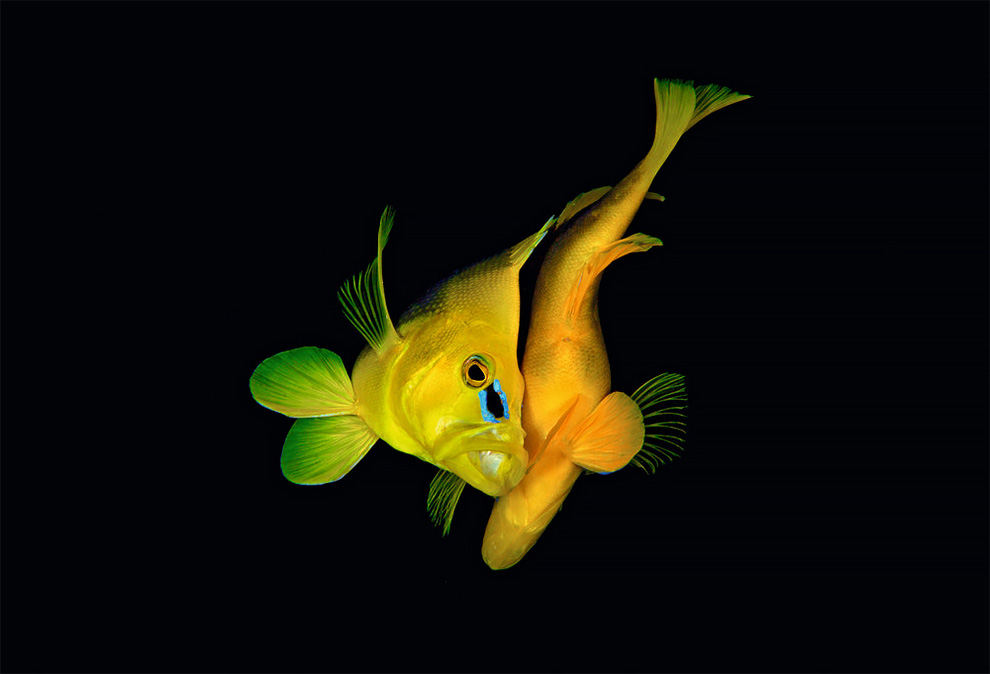 The beauty of gender-bending by Alexander Mustard. “This is a moment of ecstasy, seconds before spawning, in the extraordinary mating ritual of shy hamlets. The male is calling out as he caresses the female, who is curved around him, head-down, about to extrude her eggs. He is fanning his pectoral fins to create a current, which will draw the eggs towards him as he releases his sperm. This coral-reef fish, possibly the most beautiful of the 13 Caribbean species of hamlets, spawns at dusk – a dangerous time, when the most predators are about”. (Photo by Alexander Mustard/Unforgettable Underwater Photography/NHM) 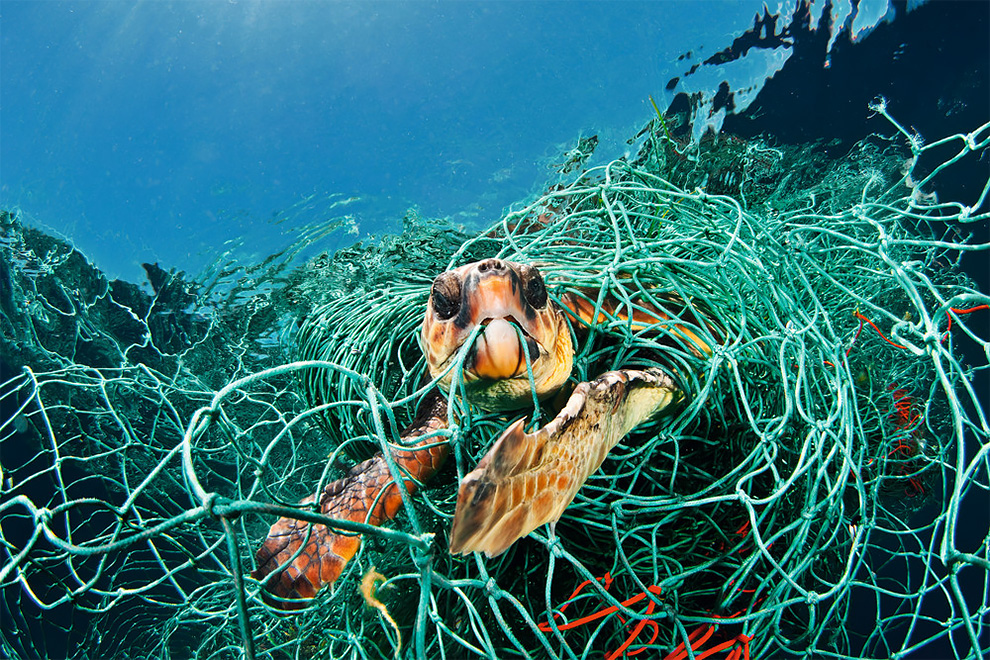 Turtle in trouble by Jordi Chias Pujol. “The photographer spotted a floating mass of netting holding a still-living loggerhead turtle, completely entangled. Though a loggerhead spends most of its life at sea, it has to surface to breathe. As this net was floating, the turtle could just about stretch up to breathe. The photographer tried to cut it free but eventually the netting was hauled on board and after 20 minutes the turtle was set free. The ocean is littered with such “ghost” fishing gear, and this was not the first time the photographer had rescued a snared animal”. (Photo by Jordi Chias Pujol/Unforgettable Underwater Photography/NHM) 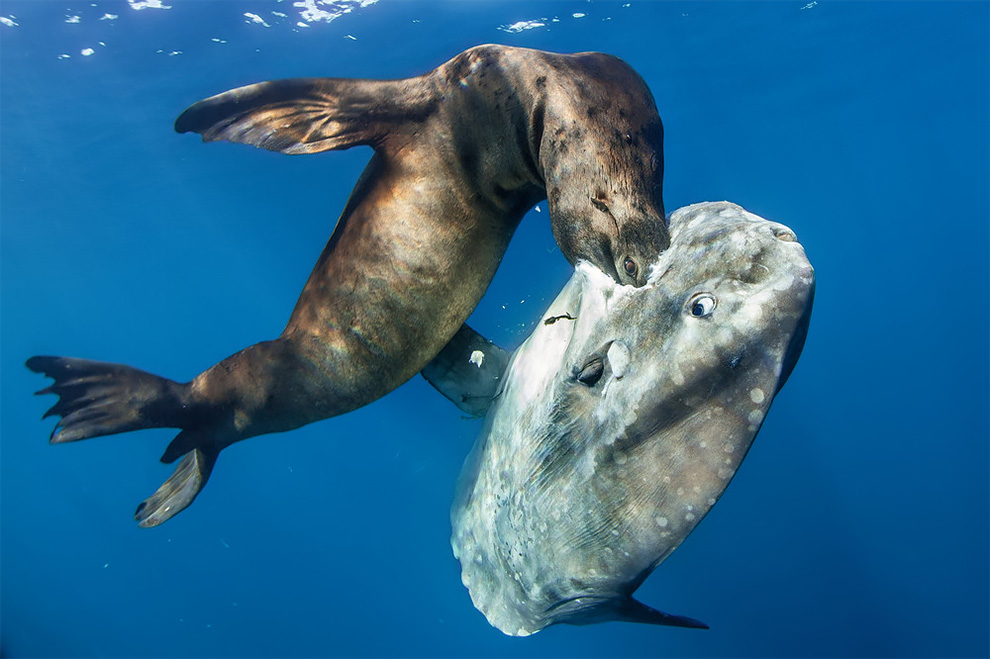 Giant killer by Ralph Pace. “If a fish can express emotion with its eyes, this ocean sunfish surely can. The youngster was desperate to dive, and the California sea lion was equally determined that it shouldn’t. The resulting thrashing at the surface attracted seabirds, which in turn brought the photographer to the scene, over Nine Mile Bank, way off the coast of California. … This photograph was taken in 2015, when the extreme El Niño event meant much of the sea lions’ usual fish prey had moved north to cooler waters, making the sunfish a prize worth struggling for”. (Photo by Ralph Pace/Unforgettable Underwater Photography/NHM) 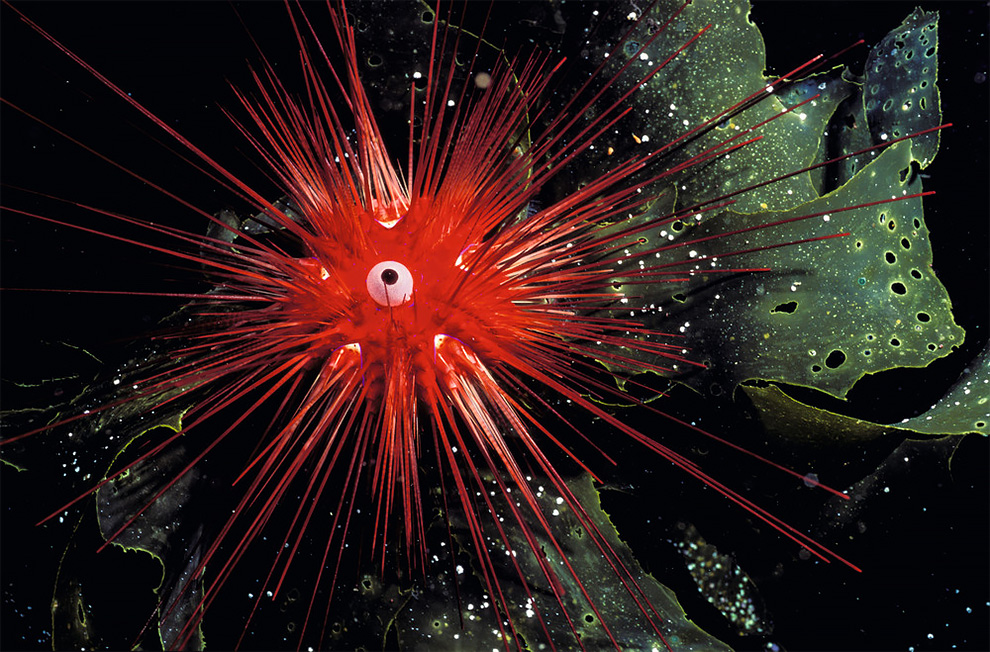 The startling warning by Darryl Torckler. “Illuminated, this is the world’s most spectacular sea urchin, yet it remained undiscovered until 1965. That’s partly because the fiery sea urchin only inhabits deeper reefs off northern New Zealand and southern Australia. But it is also because it hides away in the day, and in deeper water, where red wavelengths are filtered out, it appears black or deep brown rather than fiery red. Its obvious defence, of course, is its needle-like spines”. (Photo by Darryl Torckler/Unforgettable Underwater Photography/NHM) 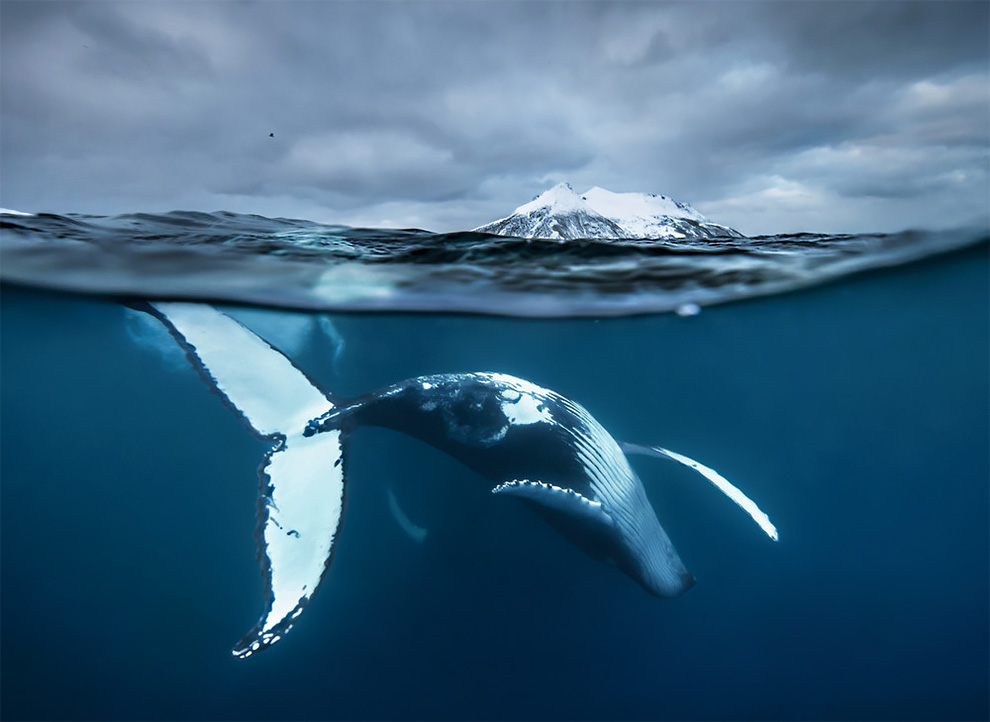 Arctic showtime by Audun Rikardsen. “An exuberant male humpback whale cavorts in the Barents Sea off northern Norway. It’s a unique split-level image, shot in low light, freezing conditions, near the end of the polar winter. The humpback is displaying his prowess to both females and rival males, singing as he pirouettes, breaches and dives. It’s behaviour that increases ahead of the migration south of at least some of the humpbacks who will head to warmer, southern locations, where pregnant females give birth and mating occurs”. (Photo by Audun Rikardsen/Unforgettable Underwater Photography/NHM) 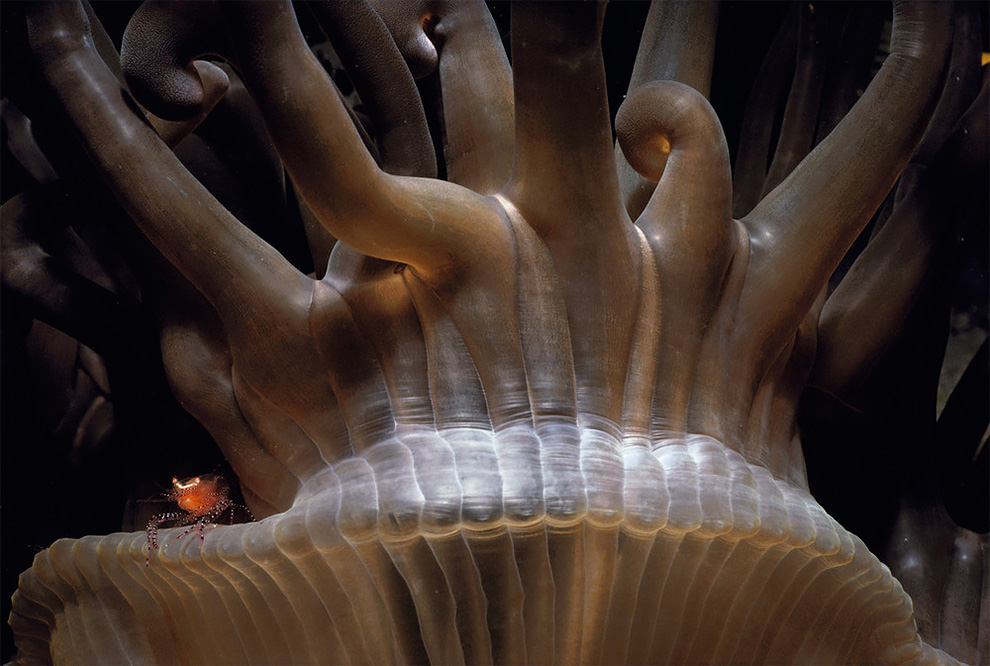 The ornate and the magnificent by Jeff Rotman. “Peeping out of the gloom, a shrimp perches on its fortress-like refuge – a magnificent sea anemone, at up to a metre (3ft) wide, the second-largest of all sea anemones. It’s a powerful picture created by an extreme low angle and gentle lighting that adds polish to the structure and a glow to the 2cm ornate anemone shrimp. The magnificent sea anemone is indeed the shrimp’s citadel, providing shelter and protection from predators, which won’t try to catch it when it’s tucked in among the umbrella of tentacles with their stinging cells”. (Photo by Jeff Rotman/Unforgettable Underwater Photography/NHM) 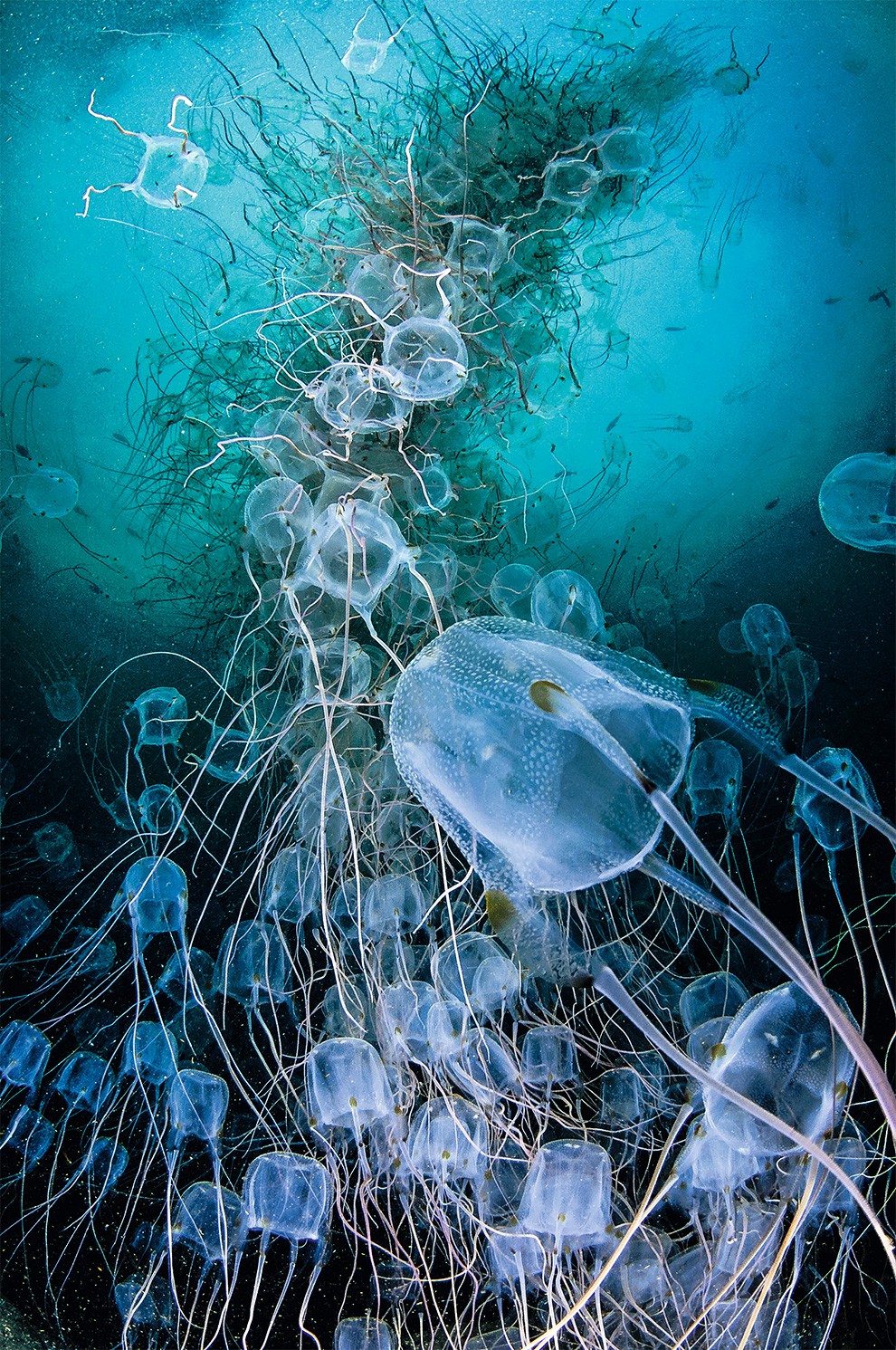 Tentacle tornado by Geo Cloete. “This is a spectacle few have seen, especially from within the swarm. Here thousands of Cape box jellyfish are swirling together in a packed column that descends deep into the water off South Africa’s Cape peninsula. Other columns are performing the same rhythmic, pulsing dance nearby, using jet propulsion to move in and out. Cape box jellies are common in the region, but seldom has such a massive aggregation been seen and certainly never photographed”. (Photo by Geo Cloete/Unforgettable Underwater Photography/NHM) 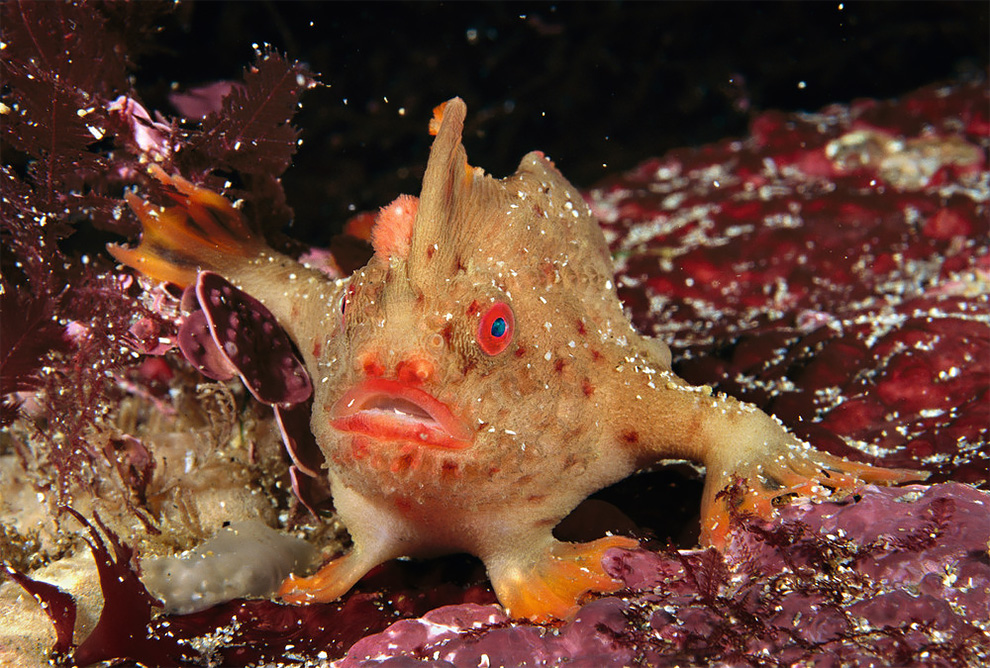 The fish that walks on its hands by Fred Bavendam. “Rather than swim, a red handfish waddles on its “hands” and “feet” over rocky reef off south-east Tasmania, Australia – the species’ only known location. Its hands are actually highly modified pelvic fins. Numbers have significantly declined from an estimated 1,000 in the 1990s. Handfish can’t walk far, so the populations that exist remain isolated. Its preferred coastal habitat is being silted up, dredged by trawling and smothered by fast-multiplying animals. The increasing water temperature is also affecting it”. (Photo by Fred Bavendam/Unforgettable Underwater Photography/NHM) 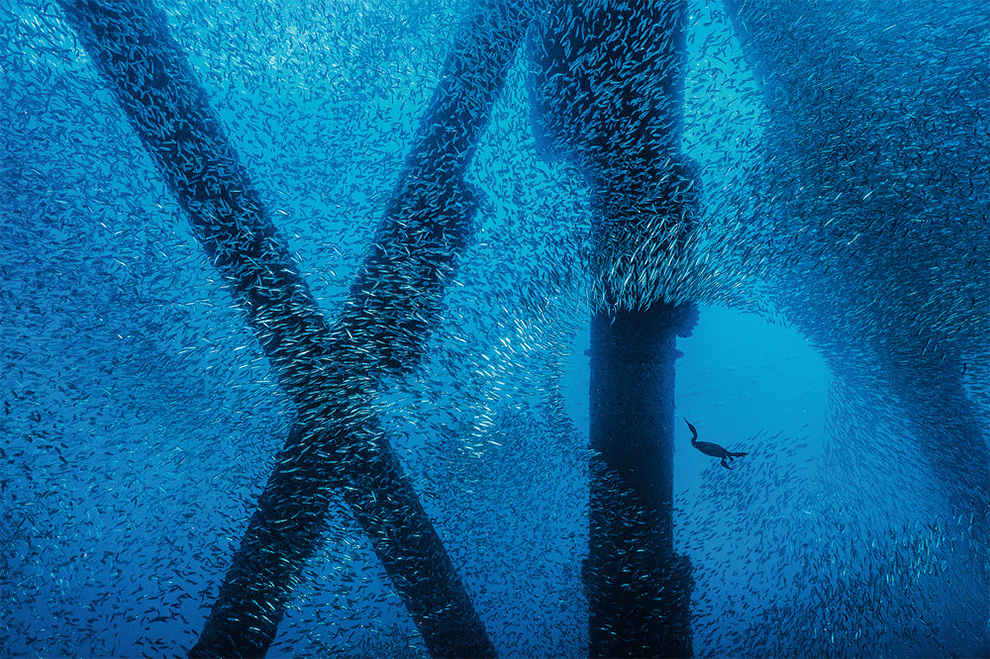 Rig diver by Alexander Mustard. “The legs of a giant oil rig off the coast of California form the structure for this swirling scene of hunted and hunter. Flying through the shoal of Pacific chub mackerel is a Brandt’s cormorant. During the day, the fish make use of the rig as shelter. But larger predators such as sea lions, porpoises and dolphins also learn that rigs can be prime fishing grounds. In this case, Brandt’s cormorants use the rig as both an underwater larder and a platform for roosting and for drying their wings after diving”. (Photo by Alexander Mustard/Unforgettable Underwater Photography/NHM) 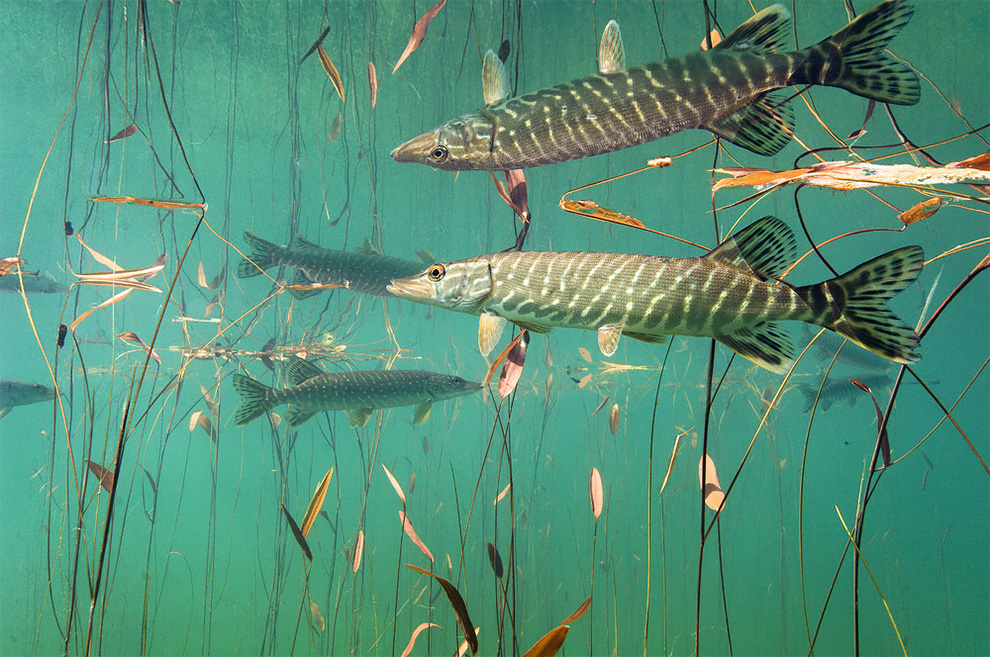 Hanging around by Michel Loup. “Motionless, as if suspended, young male pike hang close to the surface of a lake-edge creek high in the Jura Mountains of France. Though the water is crystal-clear – filtered from the peaks as it percolates through the limestone – the markings and colour of these predators help camouflage them among the pondweed. As solitary hunters, they would normally be spread out in territories, often in places with more plants”. (Photo by Michel Loup/Unforgettable Underwater Photography/NHM) 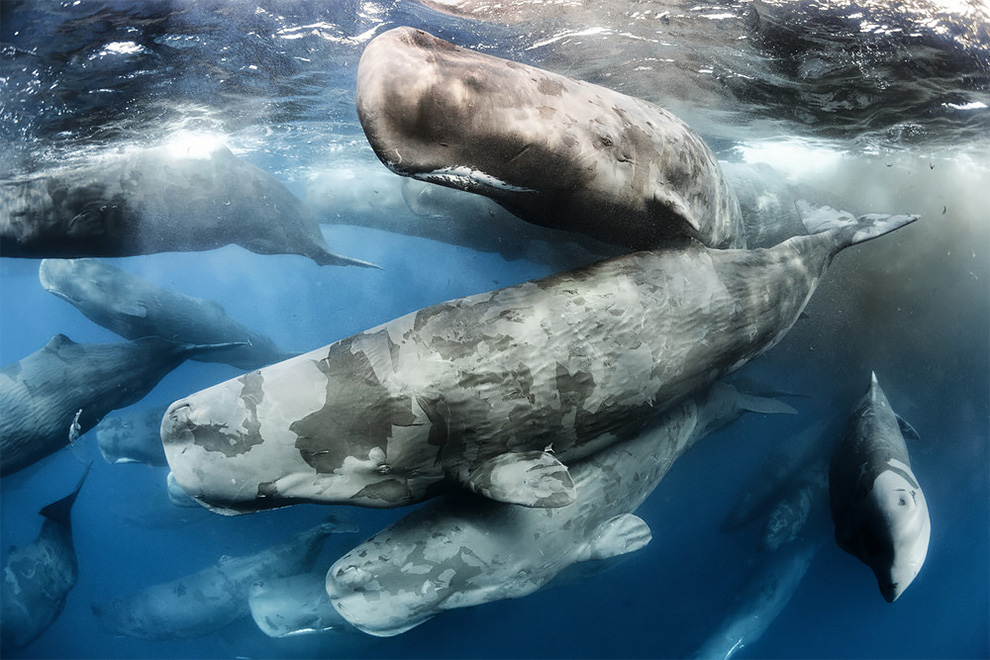 Giant gathering by Tony Wu. “The first indication that something extraordinary was going on were the blows, huge numbers of them – the exhalations of huge numbers of whales. Entering the water, the photographer witnessed an extraordinary scene. Hundreds, possibly thousands, of sperm whales were twirling and twisting through the water, bumping and rubbing against each other, and there was a cacophony of sound – the pulsation, buzz, creak and crackle of whale communication. The picture shows just a fraction of the scene, with the whales stacked up below. Undoubtedly, this was a clan gathering”. (Photo by Tony Wu/Unforgettable Underwater Photography/NHM) 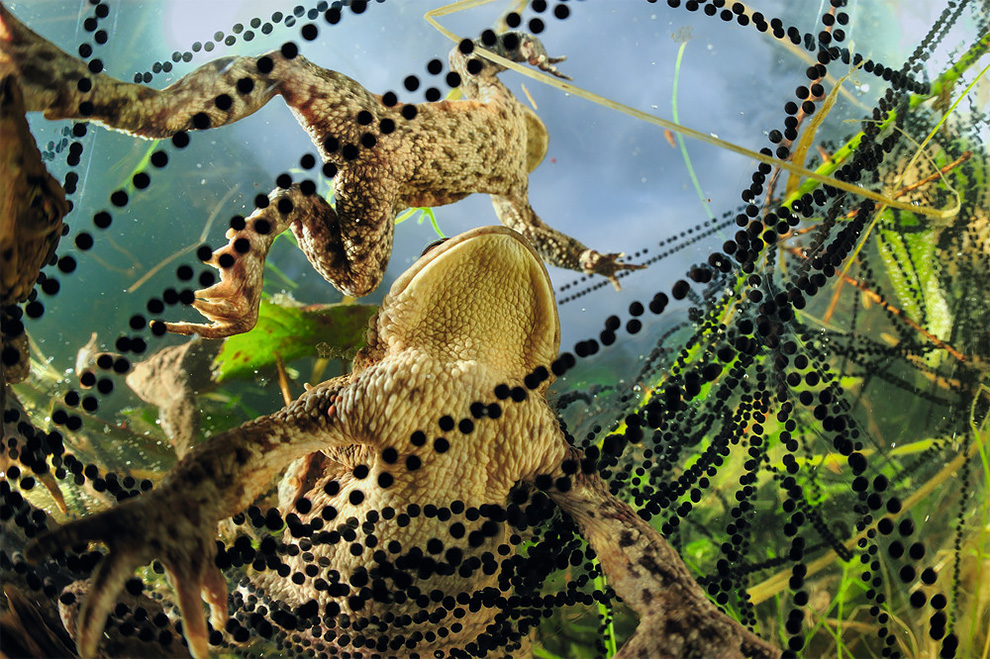 Pearls of spring by Solvin Zankl. “It’s March – peak migration time for European common toads when most are returning to the ponds and lakes where they were spawned. The move would have begun in autumn, before hibernation, in readiness for the spring push. The temperature now is a trigger, signalling that the water is likely to be ice-free. Here, in a pond in Germany, spawning is in full swing. The photographer is watching the activity on his laptop via a USB‐wire link to his camera at the bottom of the pond”. (Photo by Solvin Zankl/Unforgettable Underwater Photography/NHM) 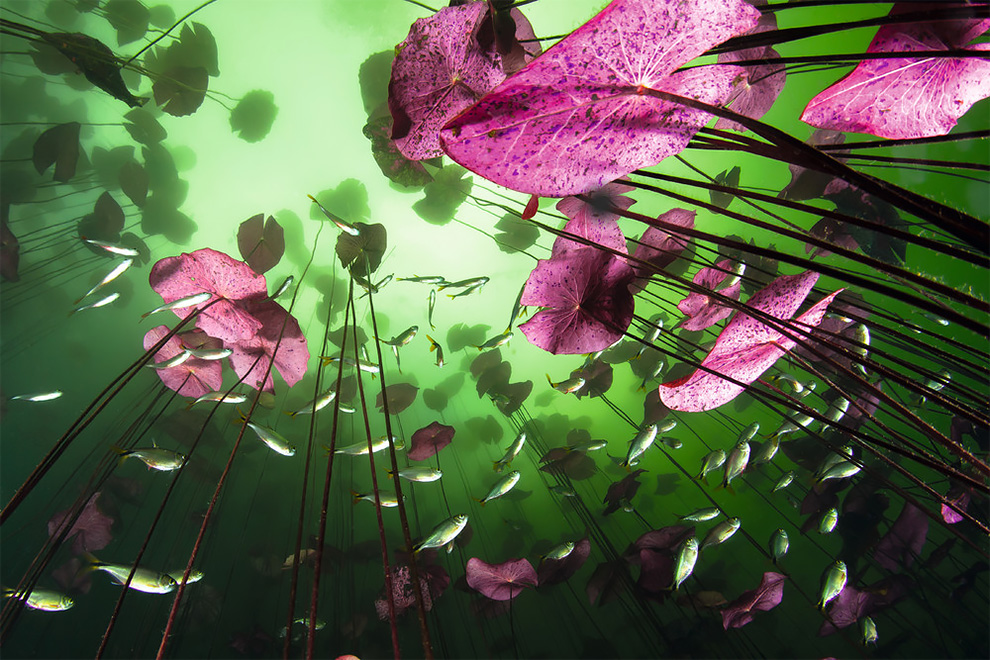 Opening to the underworld by Christian Vizl. “The view from below in the still water of the Aktun Ha cenote in Mexico is like looking into a magical aquarium. A natural summer algal bloom colours the top layer of water green, and though the undersides of the ageing lily leaves have been lit by a low light from strobes, they are truly pink. Their stems reach up several metres from the bottom of the wide cenote pool, but though most of them never reach the surface, for much of the year the water is so crystal clear that there is enough light for them to photosynthesise”. (Photo by Christian Vizl/Unforgettable Underwater Photography/NHM)