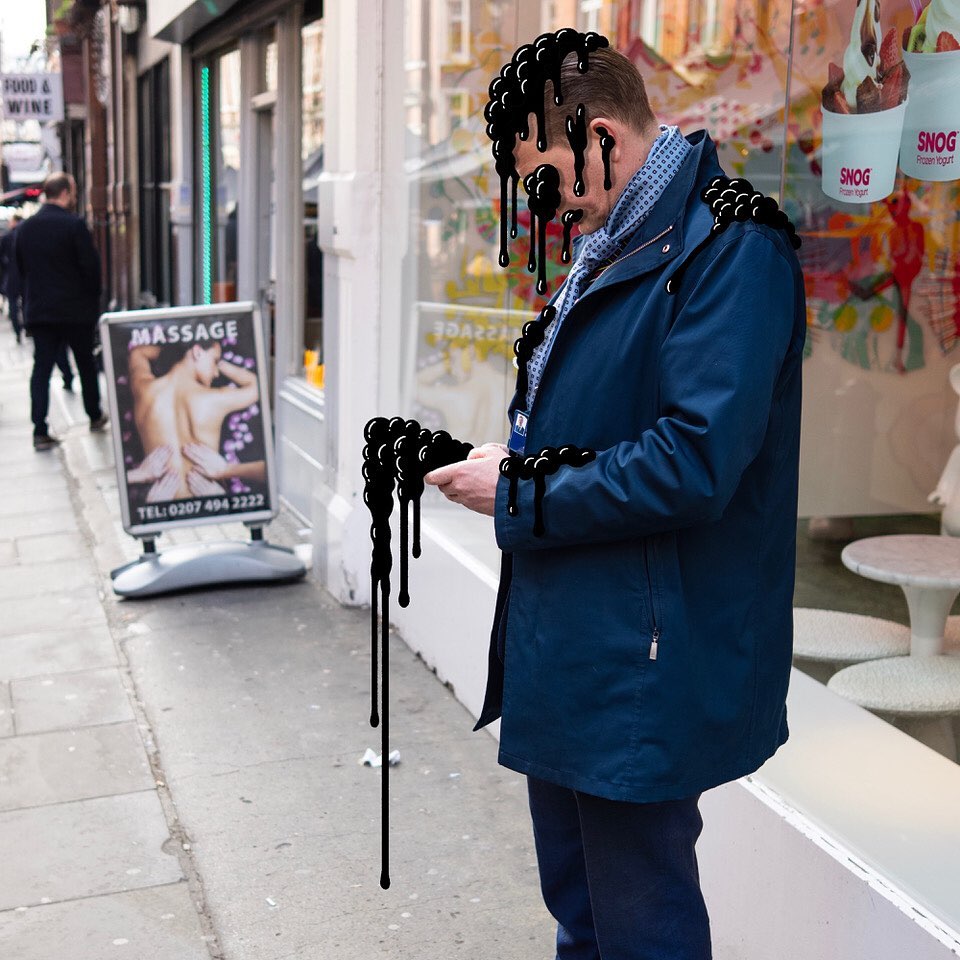 Aaaaagh! Monsters! They’re in our phones! And they’re trying to get out! Aaaaagh! But don’t panic just yet because they’re not real monsters—they’re ‘Phone Buddies!’ Incredibly colorful and imaginative illustrations of fantastical beings by artist Andrew Rae who drew them on photographs taken by his friend.

He wanted to present cellphones as portals to other worlds, as bridges between our world and the digital world. It’s also a commentary about the amount of time we spend looking at our phone screens, completely zoning out real life in favor of a pixelated version of reality.

“I try to have a walk every morning to counter my sedentary lifestyle and it’s hard not to bump into all the people immersed in their phones. I started picturing the phones as if they’re little pets or creatures and people are tickling their bellies to keep them happy,” Rae told Bored Panda.

“I mentioned this to my friend Ruskin one day when we were out with our kids and he liked the idea and we thought it could make a nice collaboration, he’d been doing a lot of street photography, so not long after we talked he sent over a selection of photographs.”

The illustrator continued about how he and his photographer friend Ruskin Kyle, who also lives and works in London, came up with the project: “After our initial discussion he sent the pictures over but at first I couldn’t get the idea to work and was worried I’d wasted his time, the phones were too small in shot and I couldn’t get it to look like the people were holding the little creatures.”

“So I sat on the project for a while until I was listening to Joe Rogan interviewing Edward Snowden and the idea of the NSA monitoring us through our mobile phones made me see the project in a new light. Instead of replacing the phones I’d draw objects or creatures coming out of the phones looking back at us and the different styles of the photograph and the drawing would make sense together as the phone screen is like a portal where the real world and the digital world meet.”

French Street Artist Paints 3D Creature Graffiti And It’s Not For The Faint Of Heart
Stuck In The Real World: Characters From Cartoons And Movies Placed In Real Photos
For Men With Balls
Fantastic Worlds of John Brosio: Tornadoes, Twisters, and a Jerk in a Road
Hyper-Realistic Liquid Oil Paintings By Sarah Harvey
Combat Mechs of The Future (and Some Robot Trashmen): Art by Sheng Lam
Skoda Fabia – The Original Cake Car
Emerging Artist Chases Her Dreams By Painting Wild Scenes Of Horses
The Story of Pin
The Many Faces of Death in Monochromatic Artworks of CVSPE
Ukraine-born Tattoo Artist Stanislava Pinchuk Inks Her Friends With Minimalist Tattoos For Food, Lessons Or Books
Sensual Female Portraits By The Russian Painter Andrei Markin
Athletic Clothing Company Has Launched A Controversial Ad Campaign Shows Marine Vet With Hogtied ‘Trump’
"Don't Think About The End At The End": Weird Advertising For An Orthodox Cemetery
During The Pandemic, This Artist Decided To Start Making Portraits Of Her Cat, Later Turned Into A Calendar
'Welcome to Wales'
How A Heart Attack Changed Artist Alex Garant's Life
1,252 Floating Balls Form An Eye When Looking From The Right Angle
Child Prodigy Aged 13 Creates The Most Amazing Nature-Inspired Drawings You’ve Ever Seen
"A Time Of Love And War": Amazing Digital Art By Wang Ling
"Zwei Katzen": Hilarious Cats Calendar By Otávio Santiago
Green Slime and Bizarre Creatures: Sam McKenzie's Acid Art
Punking The Past: The Steampunk Aesthetic Of Victorian London In Superb Paintings Of Vadim Voitekhovitch
The Absurd West, the Strange East: The Grotesque Paintings of Lui Liu
mobile, monsters, phones, society, technology

This Guy Uses Sunsets as Inspiration for Creative Selfies
The Starry Heavens Above Me And The Moral Law Within Me: Atmospheric Paintings By Nicola Caredda
Illustrator Reimagines Famous Fast Food Brands As Manga-Style Characters
These Korean Bubble Face Masks Can Get Hilariously Out Of Control
"When God Comes Back": Dark Brutal Macabre Illustrations by Ash Thorp
Two Friends Start Free Mobile Laundry Service For Homeless
From Death Cab to the Grateful Dead, an Artist Reimagines the Classic Rock Posters
Why is Your Millenial Crying? A Guide for Parents.
9 Painfully True SEX-Pectations Vs Reality
Inspired By The Pop Culture: The Explosive And Colorful Paintings Of James Rawson
2007 ‒ 2023 by Design You Trust. Proudly hosted by WebHostingBuzz.
Privacy Policy · Terms of Service · Content Removal Policy ❤️ 🇺🇦