A Los Angeles Artist Is Selling $180 “Karen” Halloween Masks, Calling Them “The Real Monsters of 2020” 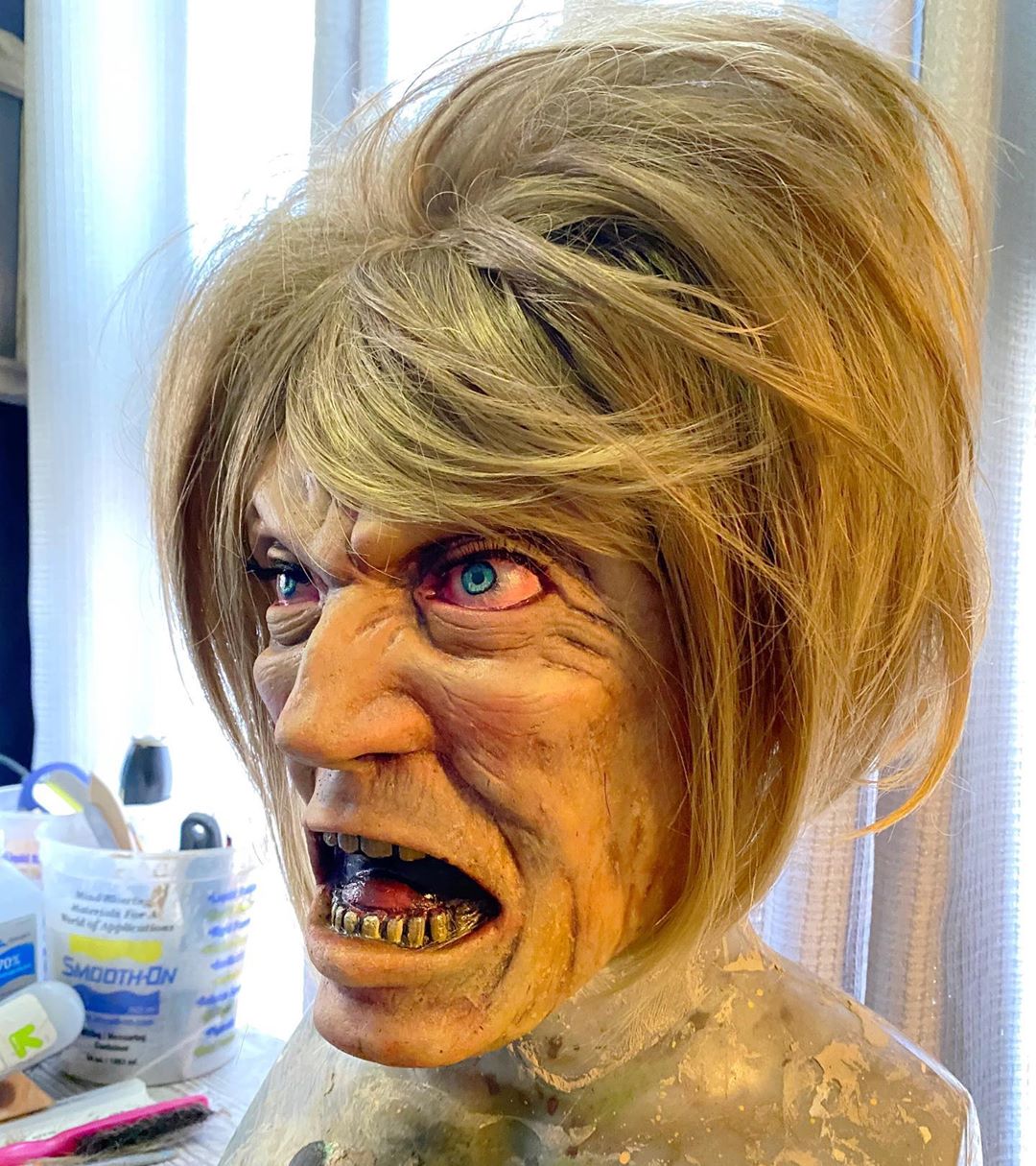 Halloween is just around the corner and, as expected, costumes highlighting the most prominent moments of 2020 are sprouting up — including “Karen” masks.

“Karen” has become an umbrella term to describe middle-aged white women who assert their sense of entitlement when they commit actions that some perceive as racist. “Karens” that have been in the news recently include Amy Cooper, who called the police on a Black man in New York in May, as well as a San Francisco woman who called the cops on her neighbor, who was writing “Black Lives Matter” in chalk on his own property. 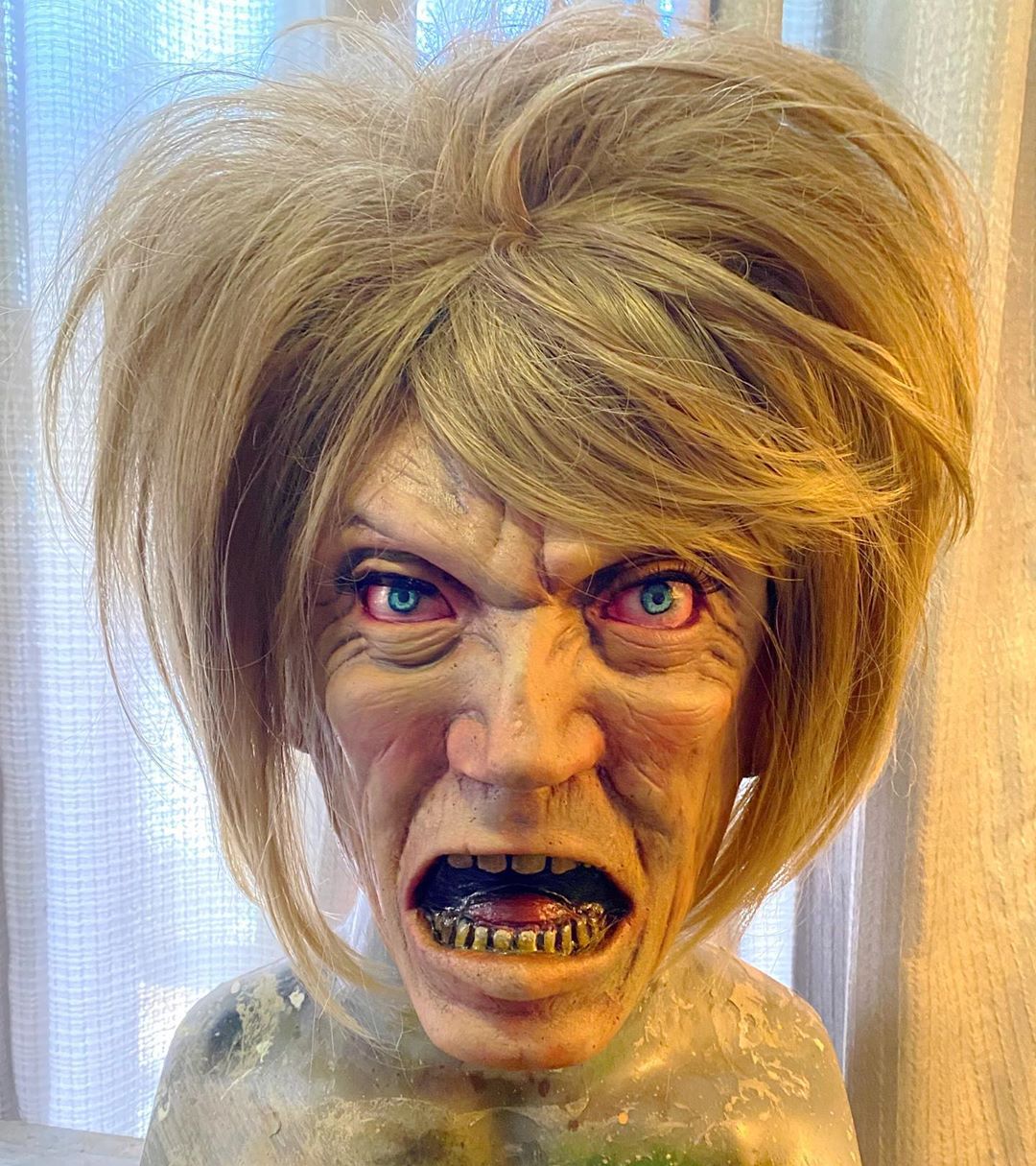 The “Karen” Halloween masks were created by Jason Adcock, a Los Angeles-based artist for hire according to his Instagram. They’re made with latex and come with styled hair, lashes, and a personal paint job, according to the Etsy description. 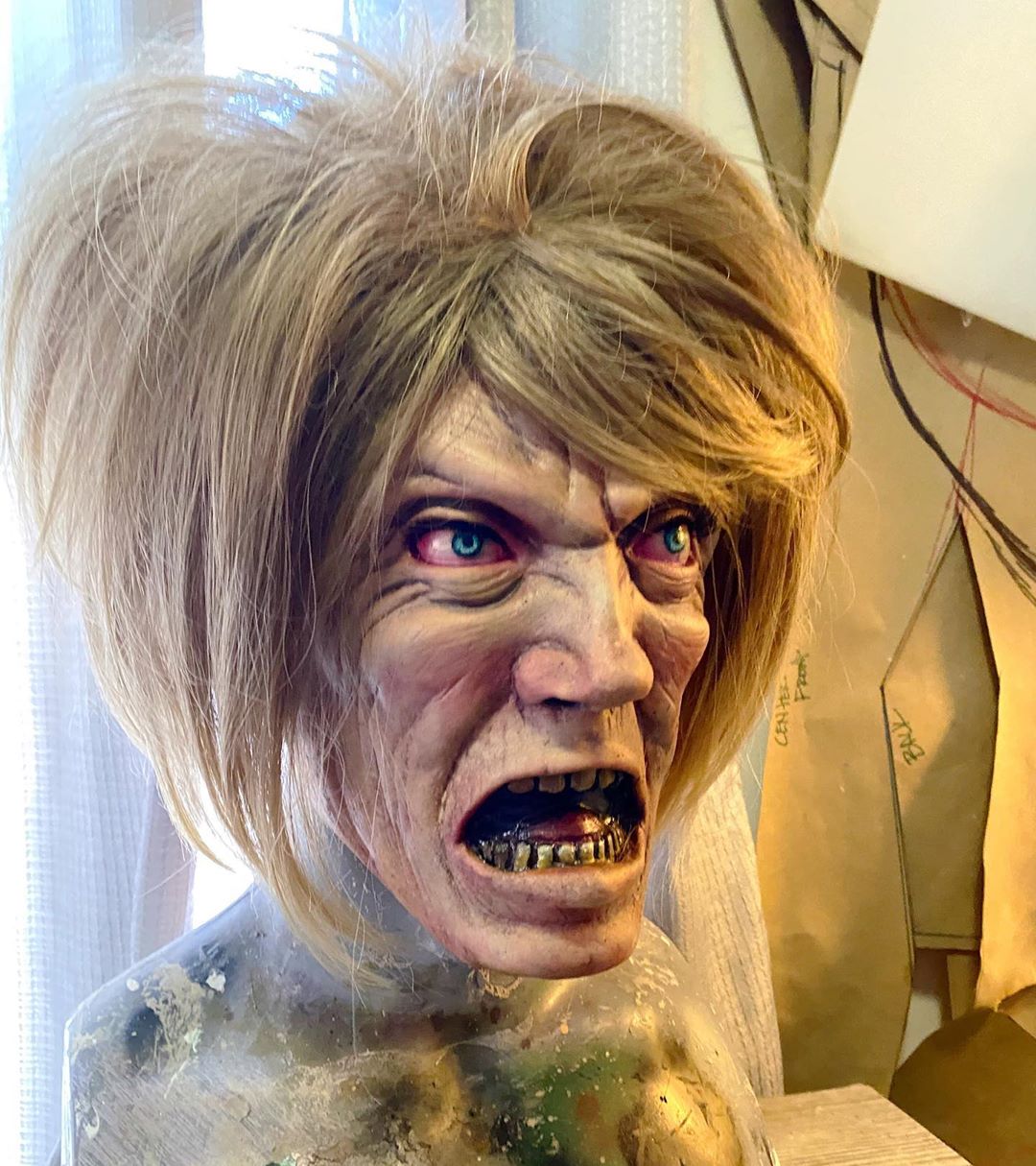 “I was starting on this year’s Halloween projects and kept seeing “Karens” pop up in my news feed and thought, ‘Damn this is the real monster of 2020,'” Adcock said.

The artist is selling two different versions of the “Karen” mask on his Etsy shop. 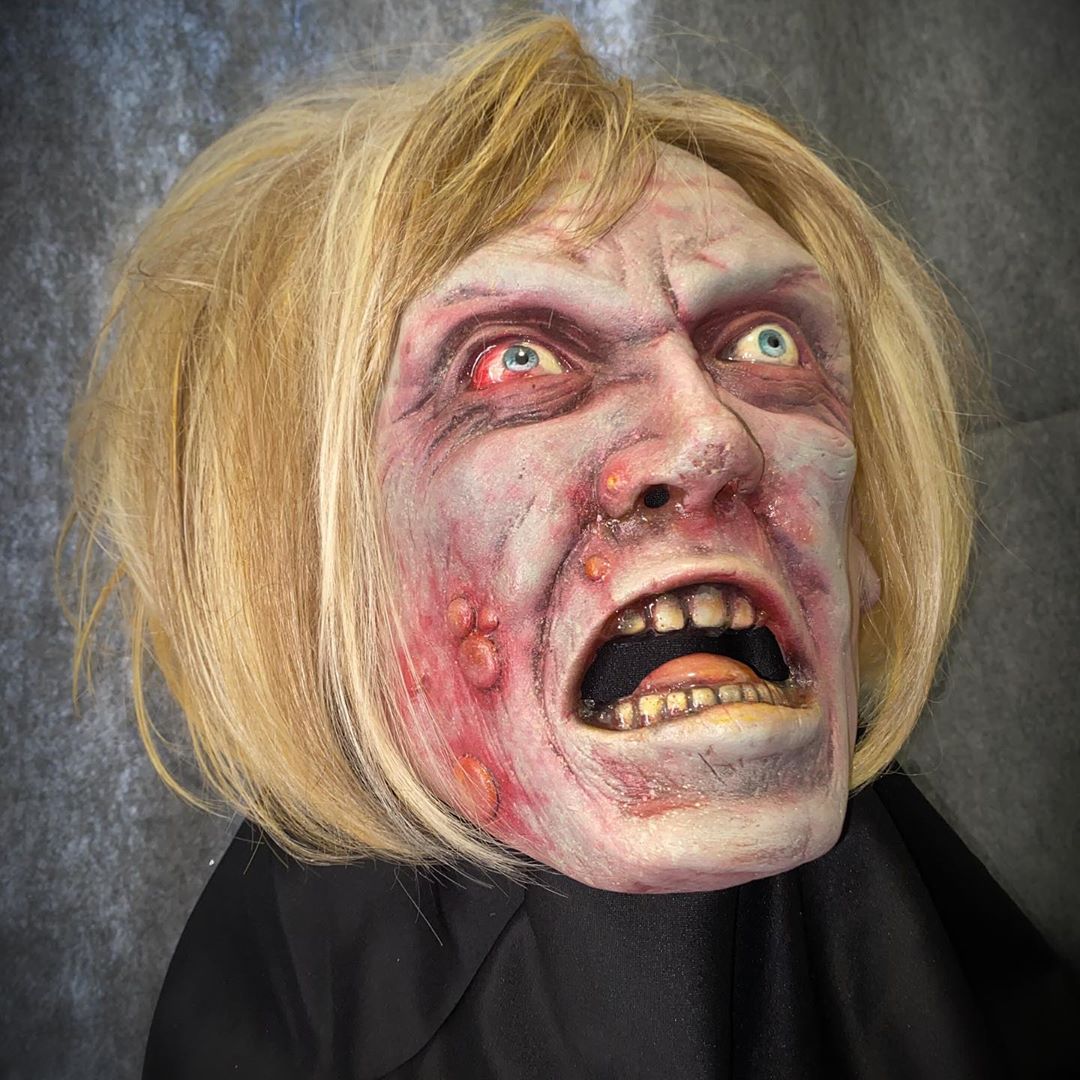 One is more in the scary realm, with the face twisted into an angry expression, complete with bulging red eyes and the inescapable blonde wig.

The other, which the artist noted on Instagram is the KAREN-19, is similar but is covered in warts and looks sick. The caption describes KAREN-19 as someone who “thought she was slick calling you all sheep and look what happened,” likely referring to those who downplay the COVID-19 pandemic. “Karens” sometimes sport the “Can I speak to your manager?” haircut, a bob that has become associated with the trope. 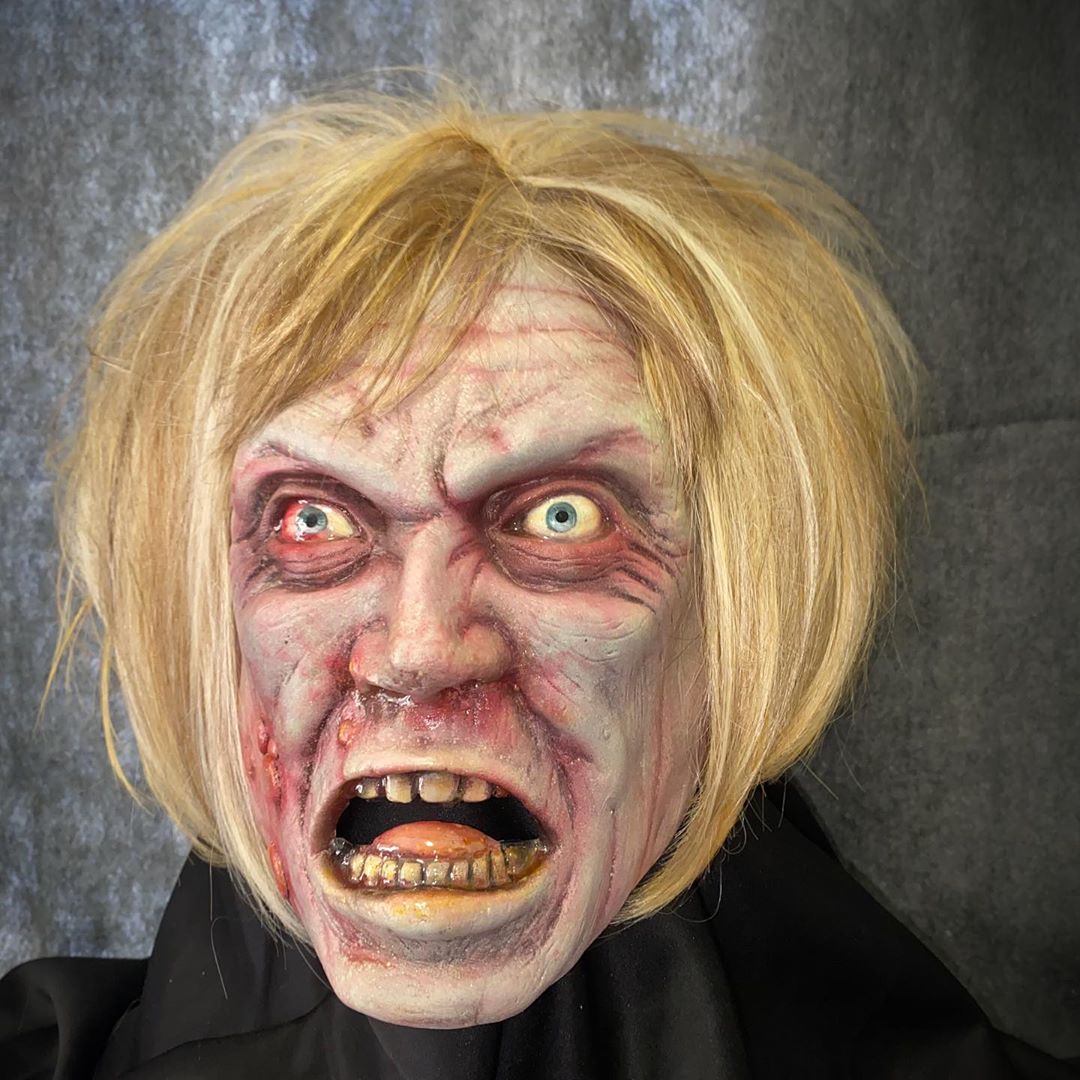 Finally, "Friends" Is Getting Their Own LEGO Set
How Do the Inhabitants of Hell Fare? Sant V. Schreiber's Infernal Portraits of Demons
This Rug Is Designed To Create An Optical Illusion That Looks Like There’s A Hole In The Floor
Man Creates Custom Fish Tank So He Can Take His Goldfish For a Walk
This Beautiful Collection Of Decorative Paper Clips Is Inspired By Turkish Motifs
Banksy Designs New Souvenirs For Hotel With The ‘Worst View In The World’
Cute Cookie Shots With Pop Culture Characters Come Filled With Milk Or Cream
Famous Female Pornstars and Twitter
It’s Tempting, But Don’t Try Eating Anything Made By This Artist — You Might Break Your Teeth!
Futuristic Large-Scale Installations Built In The Heart Of Al Ula Desert In Saudi Arabia
Giant Lion Carved From Single Tree By 20 People In 3 Years Becomes The World’s Largest Redwood Sculpture
Bizarre Beauty Pageants: Vintage Photos Of Hot Dog Queens From The Mid-Century
An Artist Has Created A Giant Mosaic Made From Recycled Plastic Bottles Depicting Vincent Van Gogh’s Famous Painting 'The Starry Night'
This Artist Reimagines Old Myths & Legends In His Unique, Dark Style
Glass Memorials That Contain The Ashes Of The Dead
Meet The Russian Who Walks Around The City During The Coronavirus Pandemic - Dressed As A Plague Doctor
Chinese Architect Designs Wearable Shield To Protect Against Coronavirus Outbreaks
Anonymous Artist ‘Wanksy’ Draws Penises On UK Potholes To Make Government Fix Them
Miniature Paper Cut Scenes By David Allen Reeves
The Pastry Chef From St. Petersburg Bakes Cakes In The Form Of KFC Wings, Chinese Noodles & Dead Pigeons
Amazing Swirling Landscapes Made From Air Dry Clay By Alisa Lariushkina
"Fear Must Abyss": A Coronavirus Sculpture Was Burned in Russia
Fashion Designer Creates Paris Landmark and Skyscraper Puffer Jackets for Louis Vuitton
This Woman Made A Cake That Looks Like A Real Raw Turkey, And It’s The Best Prank For Thanksgiving
bizarre, halloween, horror, mask, monster