Musician Builds Guitar out Of His Dead Uncle’s Skeleton, Uses It to Play Black Metal! 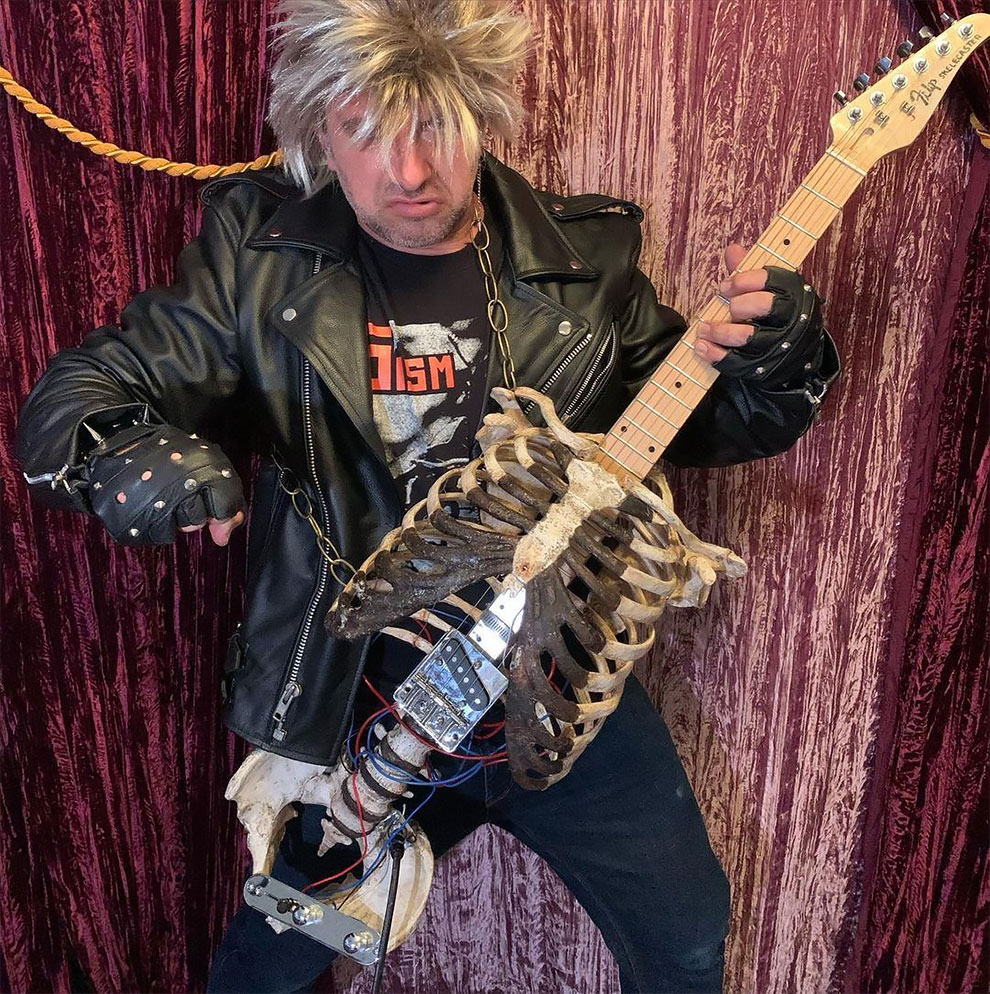 A man by the name of ‘Prince Midnight’ decided to use the skeleton of his dead uncle, Filip, to make a guitar. He has documented the creation of what he calls his ‘Skelecaster’. He appears to have attached a neck, pickups, volume knobs, strings, and electronics to the skeleton. The rib cage serves as the body of the instrument and the spine and pelvis make up the rest of it. On the headstock are the words: ‘Filip Skelecaster’. According to Prince Midnight, the guitar plays perfectly and “sounds awesome”.

“So, my uncle Filip died in the 90’s and donated his body to science. However, the schools in Greece discontinued using actual skeletons and he ended up in a box in a cemetery that the family has had to pay rent on (permanent grave was $150,000) So, we finally made the move to bring him to the US. Happy to be reunited!” he writes. 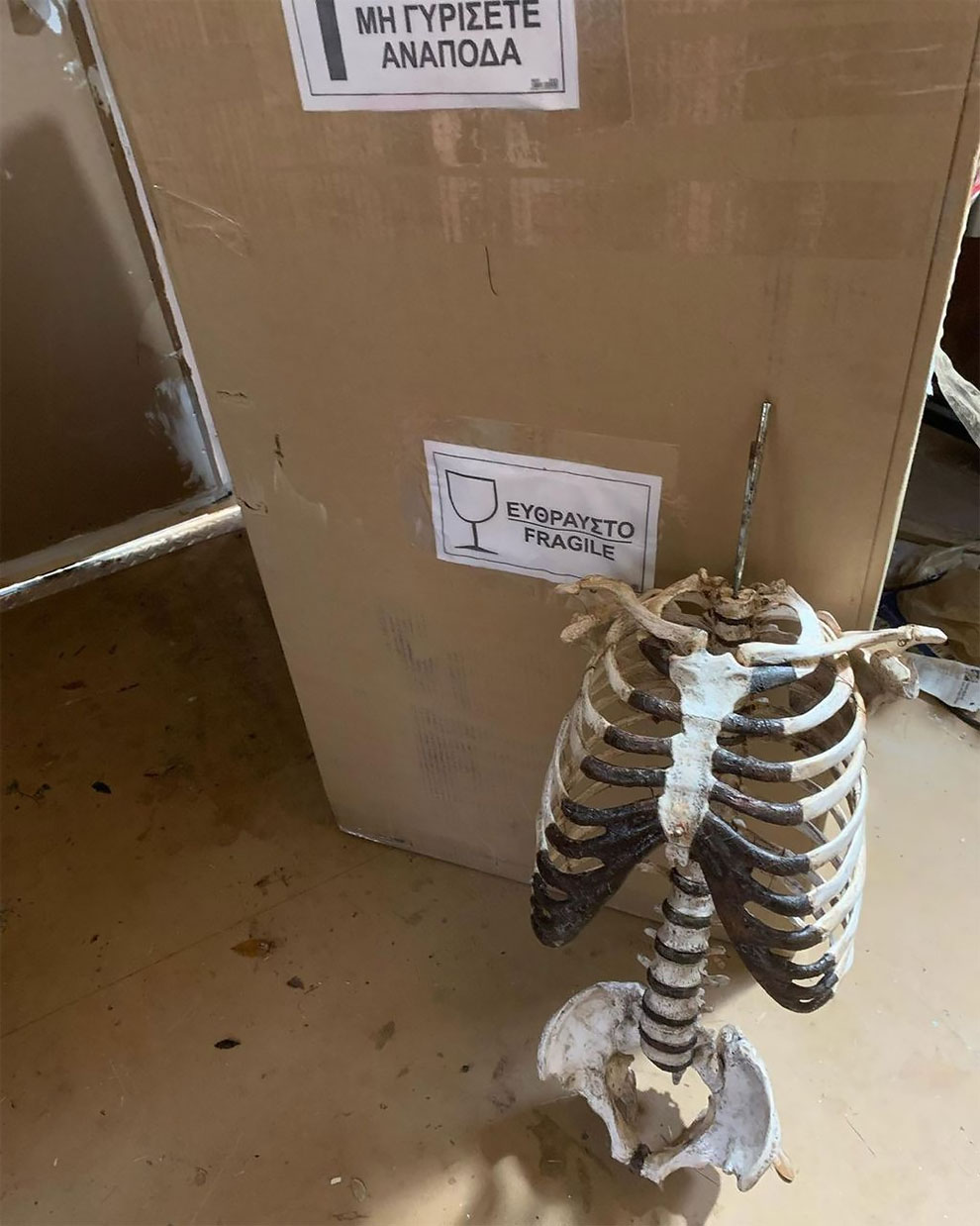 “As many of you know, my uncle Filip was a big metal head and very influential to me growing up. Since repatriating his remains, I’ve struggled with what to do with them. I have decided that I will be turning uncle Filip into the first actual human skeleton guitar so he can continue to shred forever.” 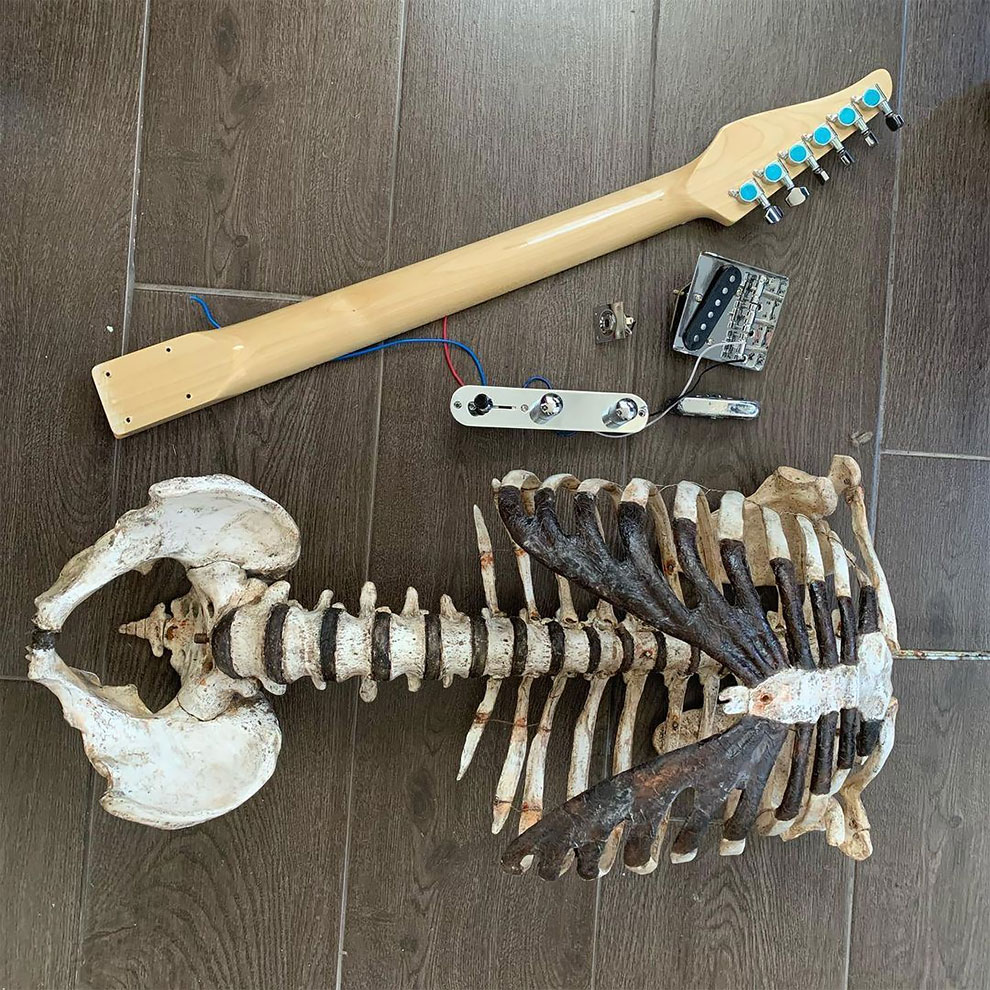 “So, even with a steel rod through the entire spine, uncle Filip’s skeleton is too rickety to be a functional guitar. Wouldn’t stay in tune. So, adding some steel brackets to support the structure.” 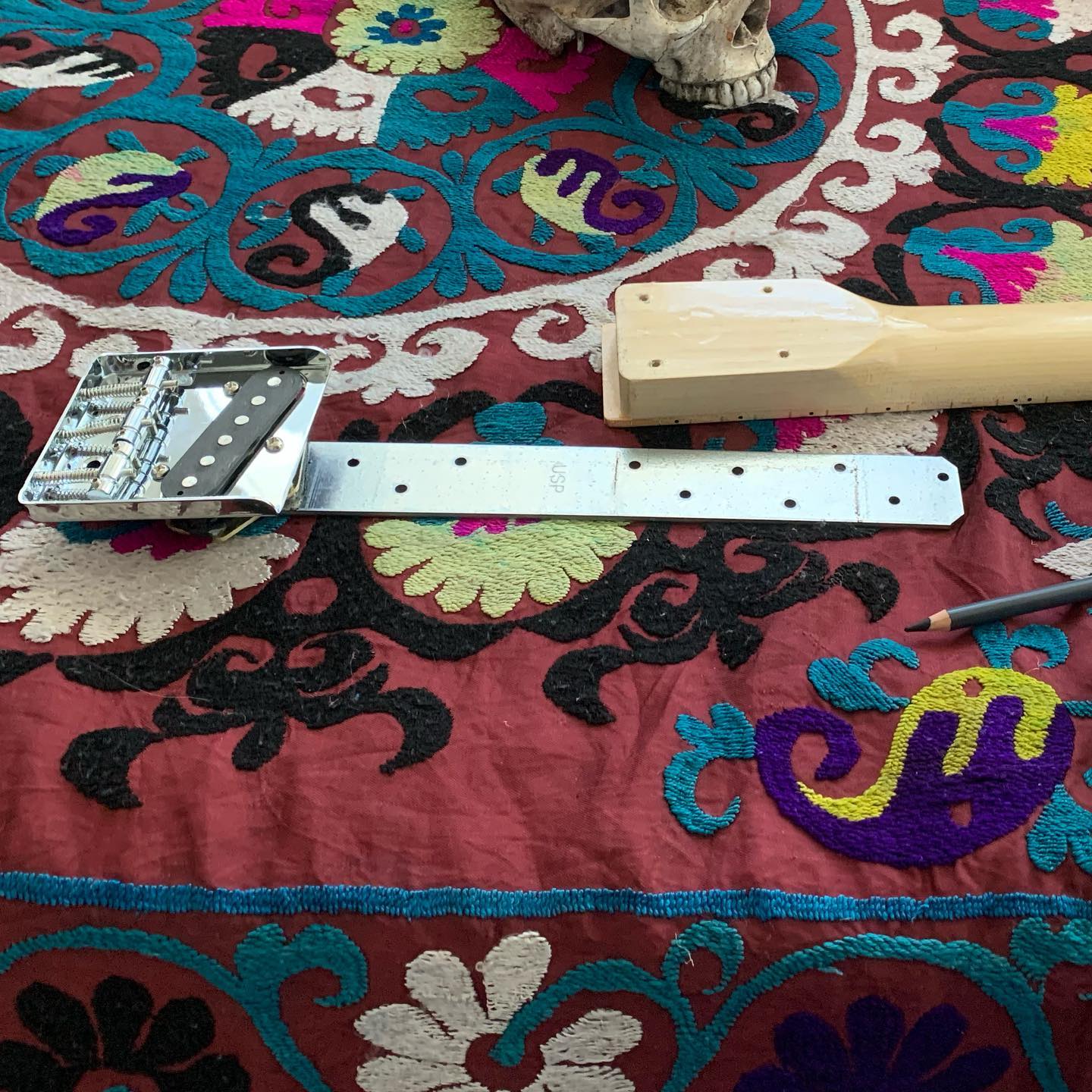 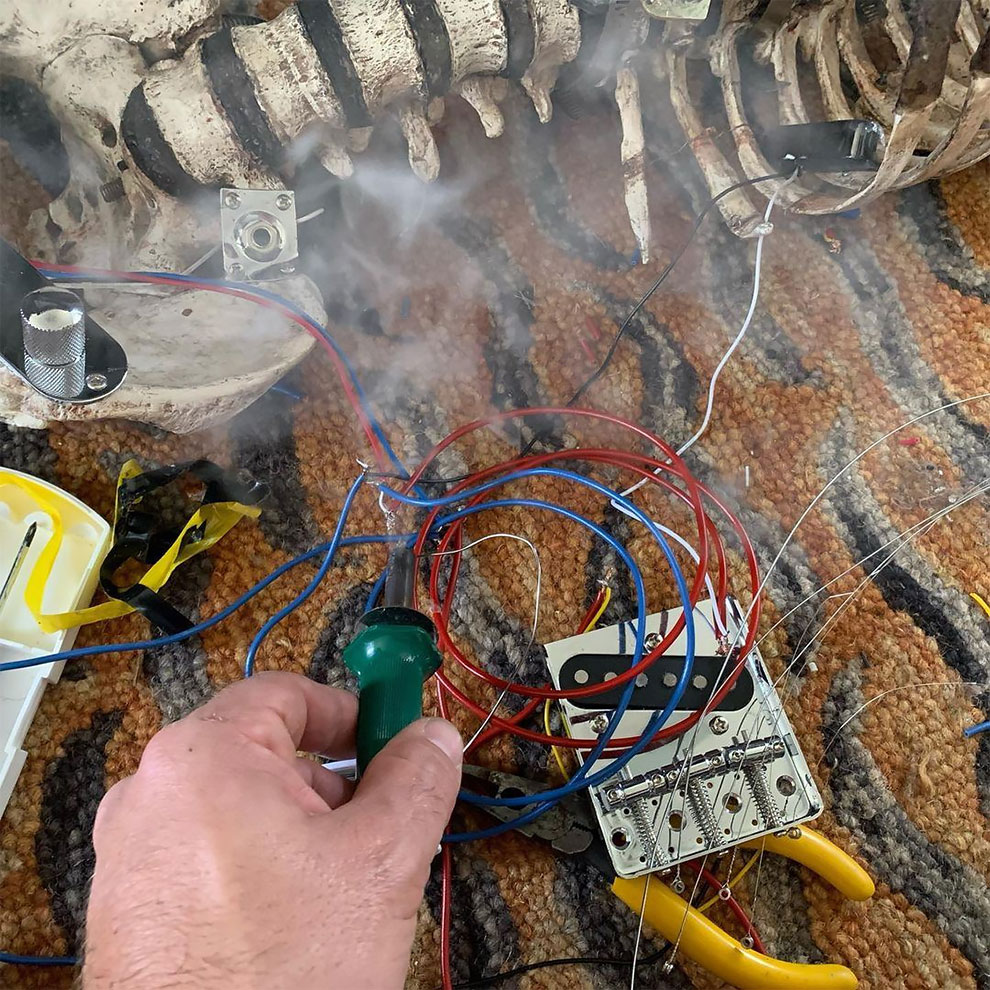 “Mounted the output jack on Filip’s iliac crest and lumbar vertebrae five. Gotta go to Home Depot and get some wires. Appreciate all the support and suggestions. Keep them coming!” 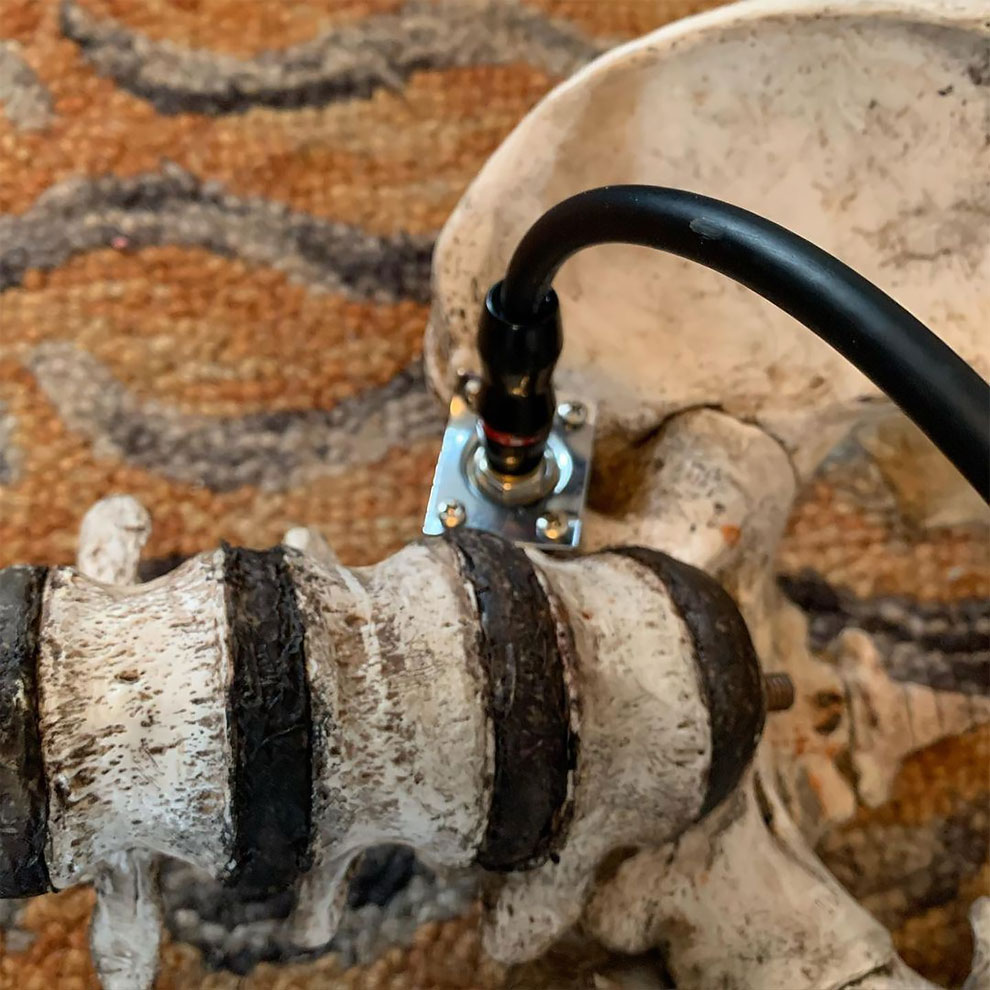 “Finished wiring the pickups, jack and soldering all the connections. Filip will soon live again!” 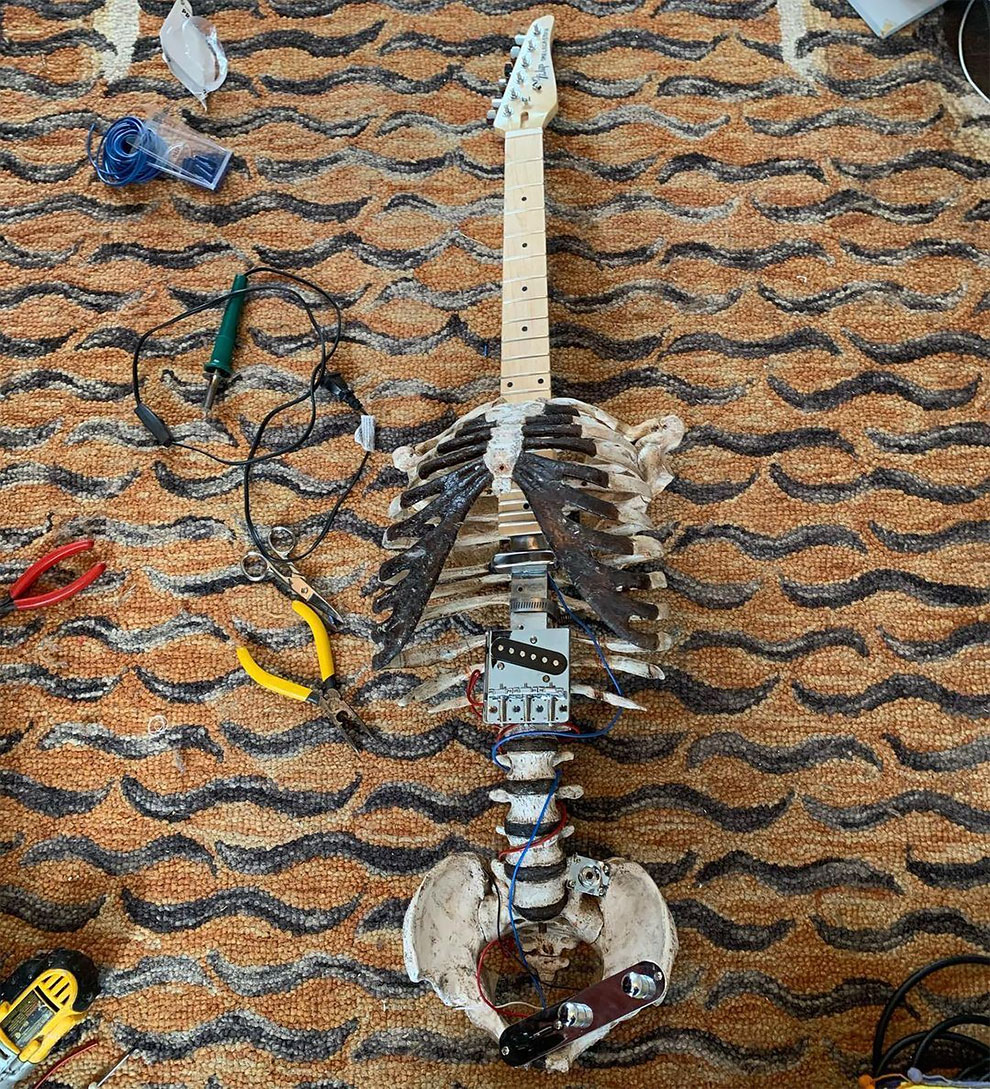 “Some have asked about the construction of the guitar, wondering how to action is, if it stays in tune, ease of play. So, the neck and bridge are mounted level and evenly to the same 1/2 inch steel bar and the spine of the skeleton also has a steel rod in it. I’ve welded them all together. It’s totally stable and functions as a normal guitar with the exception of having to move your hand inside the ribs to ply above the 12th fret. I will post some videos playing it soon. Uncle Filip R.I.P. (Rock In Perdition).” 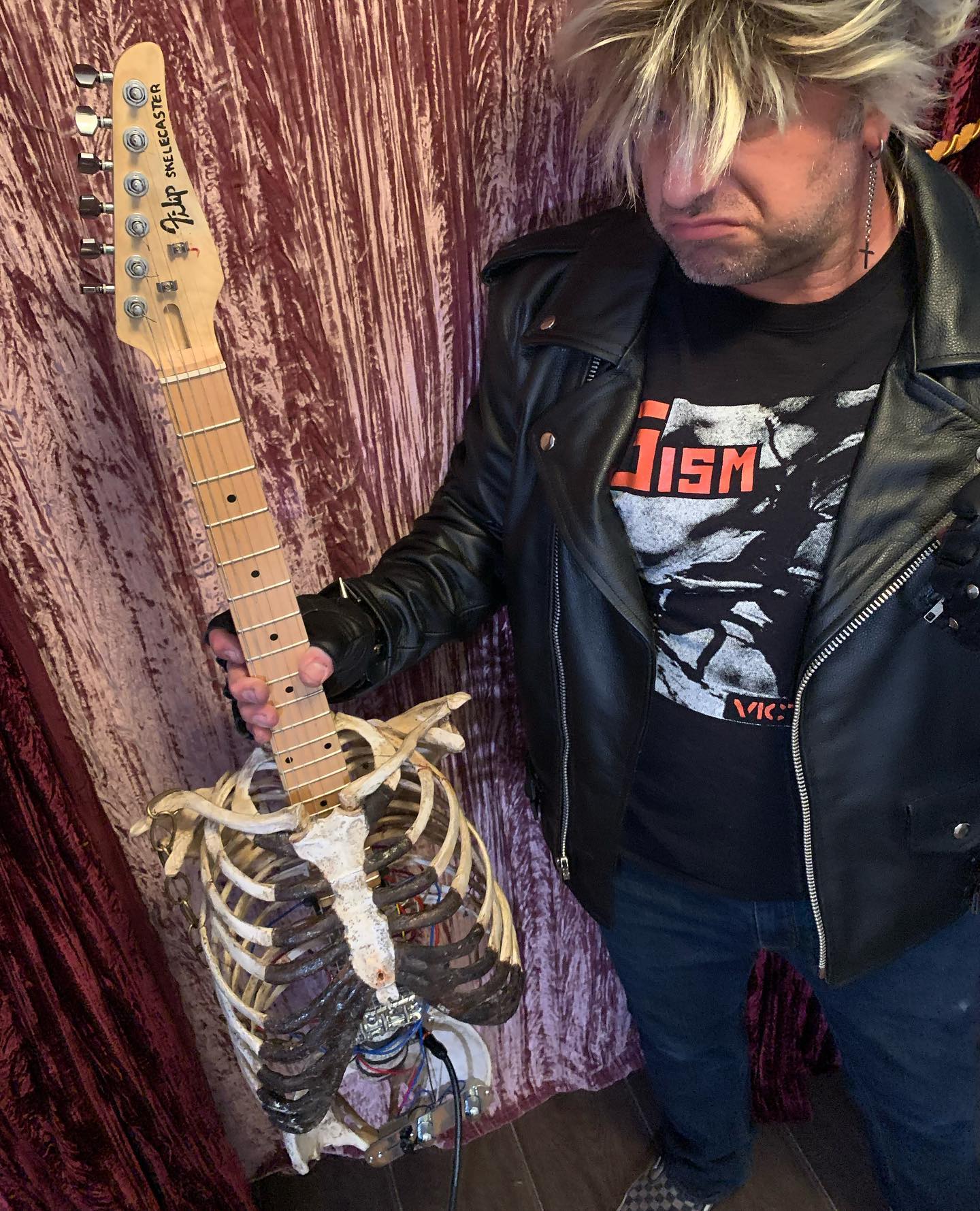 This Mind-Numbing Machine By Blake Fall-Conroy Lets You Experience Making The Minimum Wage
"How Do You Feed Spirits?": These Haunting Sculptures Of Children Will Send Chills Down Your Spine
Artist Creates Lighting Fixtures Inspired From Star Wars Movies
Cradling Hyper-Realistic Babies In Uncanny Valley
Artist Janet Echelman Installed A Voluminous Sculpture Floating Above The Streets Of London
Unevenly Stitched Jeans Will Make You Do a Double Take
Stunning Welding Art By 23-Year-Old Welder From Chicago
The Catshmallows - Japan's Felissimo Are Selling Marshmallows That Look Like Cats
Meet The Trikini, Beach Fashion’s Answer To Coronavirus
Bone Church of Rome: Amazing Vintage Photos Show Inside Rome’s Capuchin Crypt From the Late 19th Century
Outstanding 80s Hairstyles That You Can Almost Smell The Aqua Net Hairspray
This Guy Uses Cardboard As His Artistic Tools And People's Cars As His Canvas
This Artist Has Made A Portrait Of Accordionist From Real Accordions
Cristiano Ronaldo’s New Bust Will Give You Nightmares
Artist John Marshall Made These Selfie Cardboard Cutouts At Sunset To Get You In The Mood
These Christmas Boobles Are Just The Injection Of Festive Humour We Need This Week
This Entrepreneur Makes Anti-Mask Masks For Anti-Maskers
Black Velvet Galaxy Nebula Cake
Eco Street Murals By NEVERCREW Duo
This Instagram Account Collects The Worst Interior Designs Ideas
When Architecture Meets Nature: Fantastic Giant Wooden Objects Of Henrique Oliveira
Steampunk Animal And Insect Sculptures By Igor Verniy
Designer 3D Prints Famous Logos Into Items You Can Use Everyday
Artist Redesigned Famous Logos, Printed Them Out And Repackaged Them In A Way That Will Mess With Your Head … In A Good Way
bones, guitar, Prince Midnight, Skelecaster, skeleton, uncle