The British Ecological Society has released a collection of winning and highly commended images from their annual Capturing Ecology competition. These photos, taken by international ecologists and students from around the world, showcase the beauty and complexity of nature. The selection includes a mother leopard hunting and a bird floating peacefully on water, highlighting the intricate relationship between humans and the natural world. 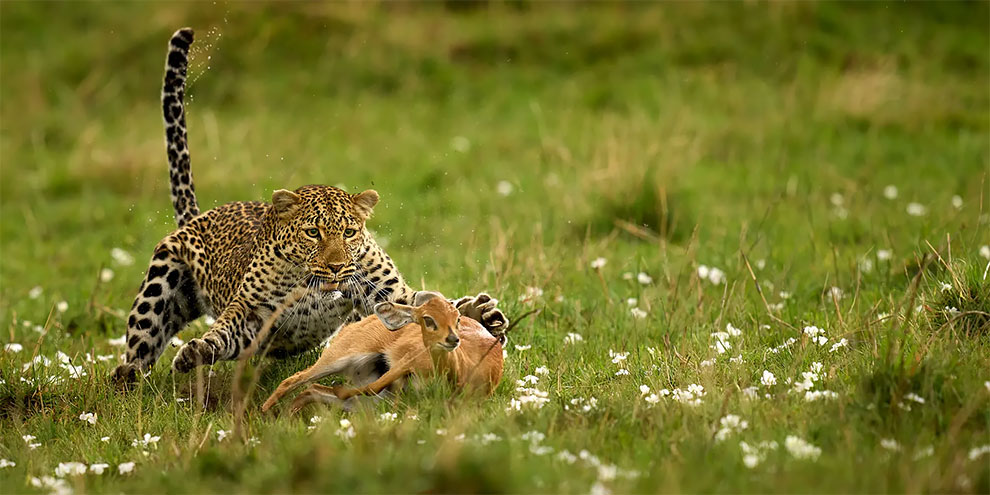 Leopards don’t often hunt during the day but demand from her cub meant Luluka had to have a go. Steenbok are not easy prey; they exhibit multiple adaptations to avoid predation, so the hunt was long and careful. It took Luluka four attempts to secure her prey. Photograph: Peter Hudson/BES Capturing Ecology 2022 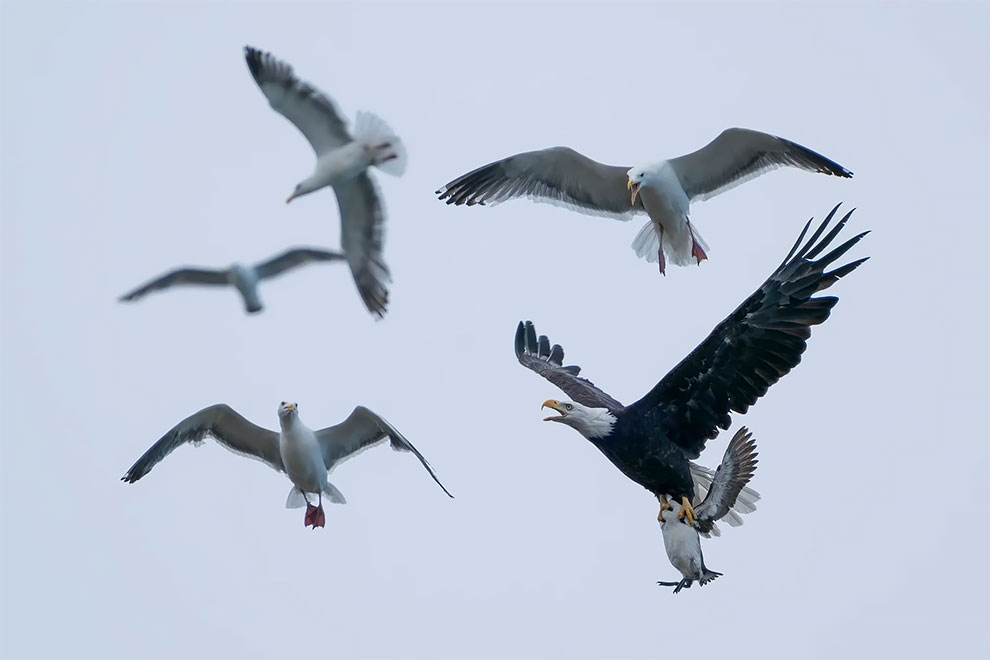 A bald eagle navigates the harrowing process of escaping from Haystack Rock on Cannon Beach, Oregon, US with a common murre that it snatched from the top of the rock. Photograph: Sam Eberhard/BES Capturing Ecology 2022 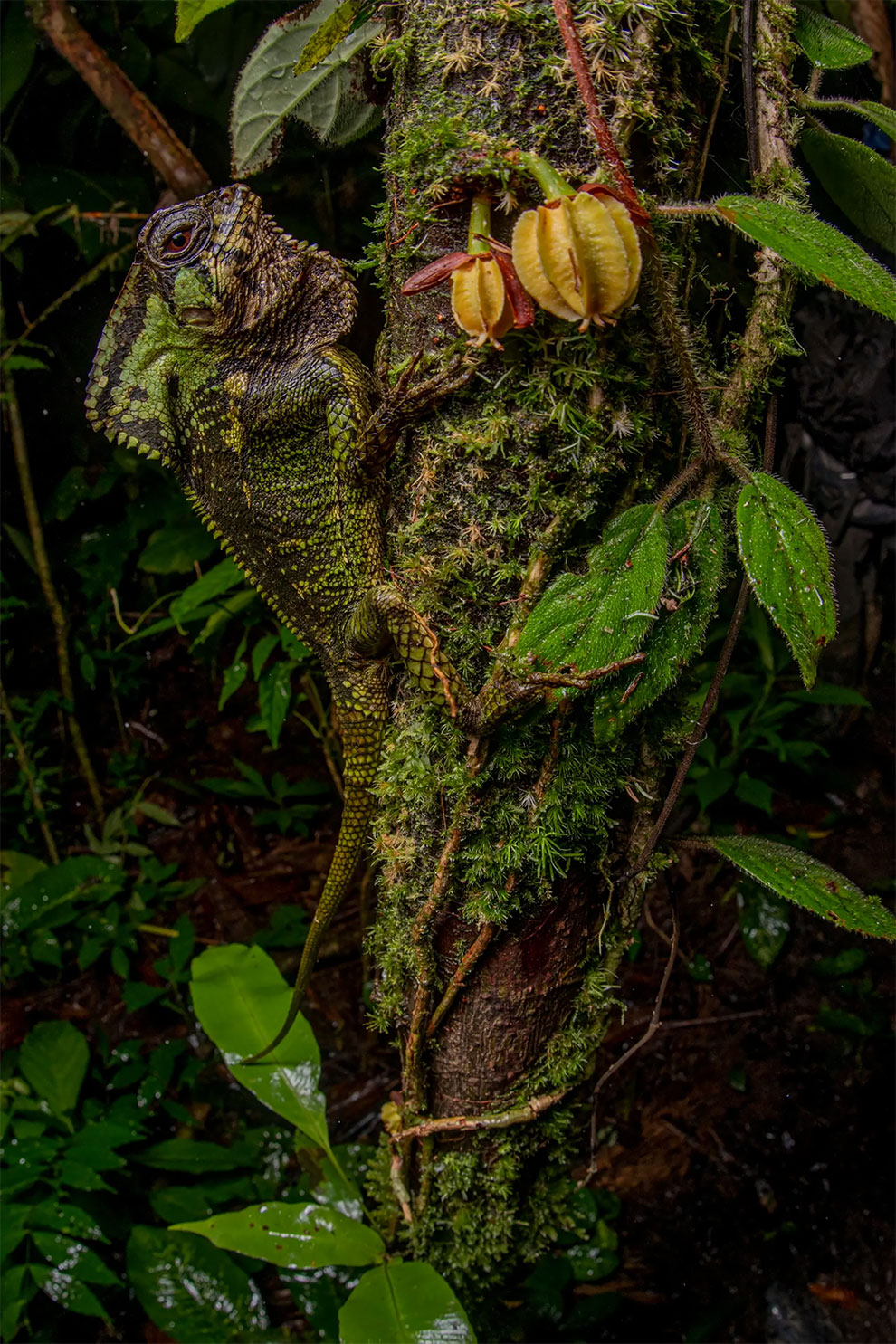 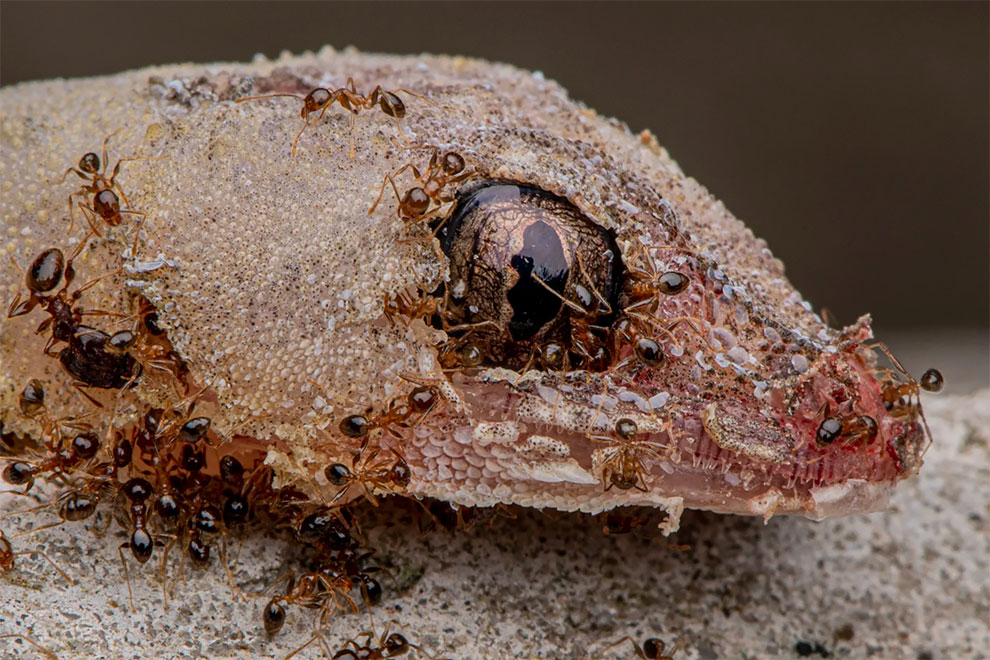 Lobon-Rovira said: ‘Isn’t it utopian that two invasive species cross paths in the race for survival? That is the case that crossed my lens when I found an army of fire ants immobilising, killing and causing the disappearance of a house gecko (Hemidactylus mabouia) in my backyard in Florida’. Photograph: Javier Lobon-Rovira/BES Capturing Ecology 2022 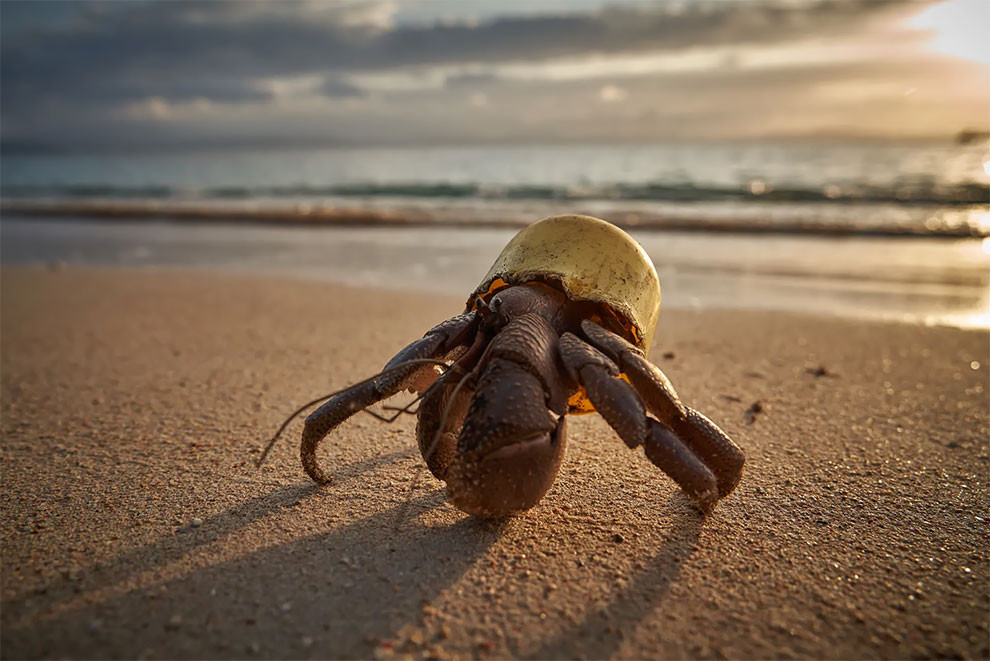 A terrestrial hermit crab (thought to be of the species Coenobita) finds a new home at a beach in Pulau Bangka, Indonesia. Photograph: Andreas Eich/BES Capturing Ecology 2022

Up close and personal winner – Wild Pearls by Javier Lobon-Rovira 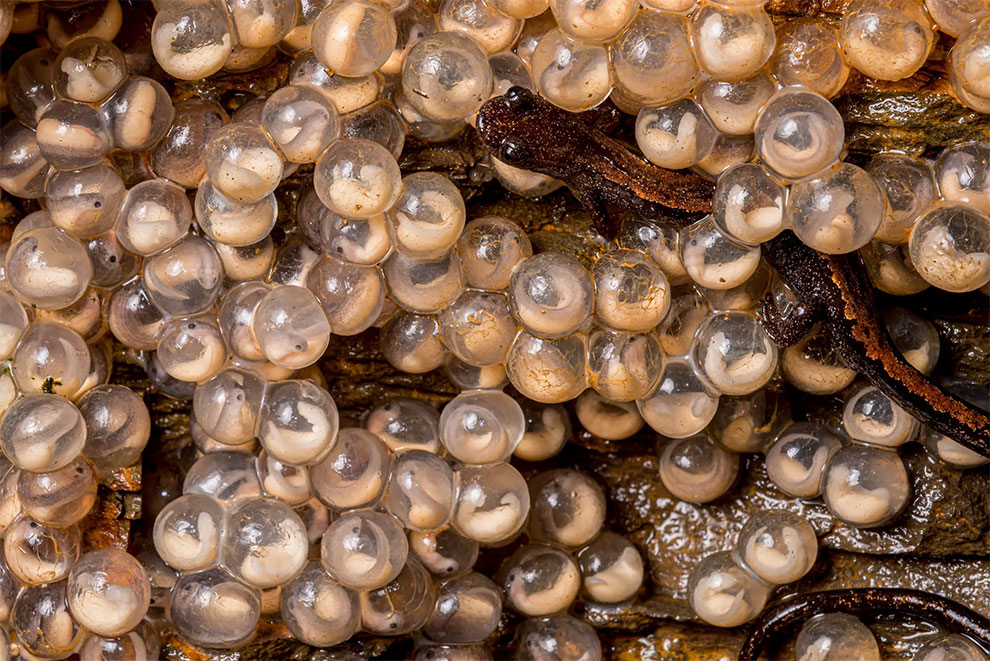 The golden-striped salamander is one of the species most vulnerable to water contamination, which is why its presence is used as a bioindicator. As vulnerable as it is elusive, this species breeds in caves and rock cracks, where pure water runs out of the rock bed. One single female can lay more that 500 eggs in every reproductive season, lining the walls with living pearls. Photograph: Javier Lobon-Rovira/BES Capturing Ecology 2022 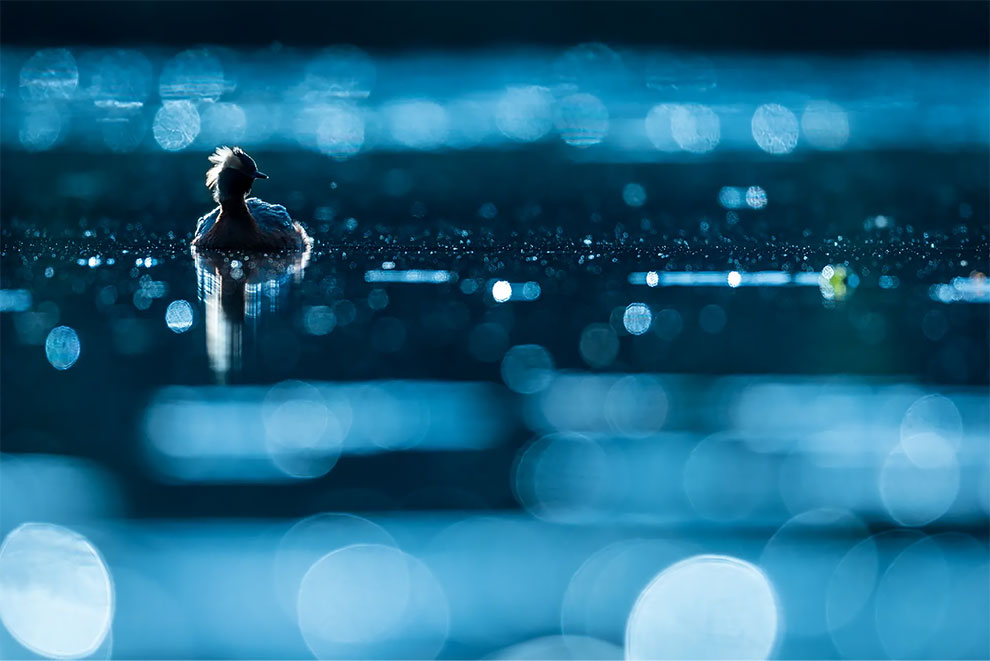 Hardenbol said: ‘The image shows a horned grebe (Podiceps auritus), photographed from a floating hide near Tampere, Finland. I took this image in the early morning with a low white balance as the sun was rising behind the bird, creating a beautiful reflection on the water and the lily pads’. Photograph: Alwin Hardenbol/BES Capturing Ecology 2022 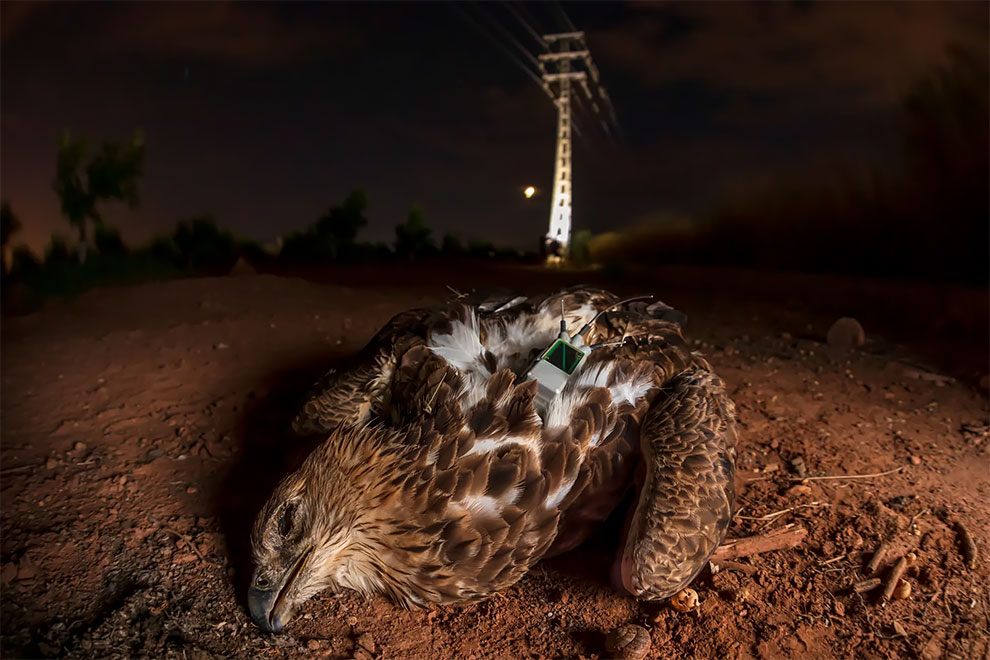 Bruma is a female Bonelli’s eagle who died from electrocution. She was tagged with a GPS transmitter by the Movement Ecology lab (led by Pascual López at the University of Valencia) when born. It helped scientists and authorities identify the power lines responsible for her death so that they can be fixed to avoid future eagle electrocutions. Photograph: Roberto Garcia Roa/BES Capturing Ecology 2022 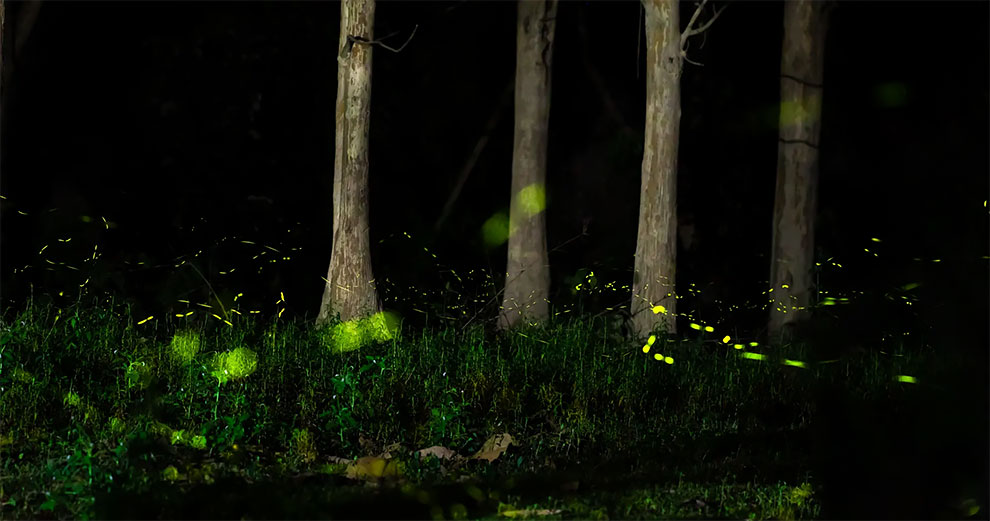 Patel said: ‘Diwali is a festival of lights. These adorable little fireflies were creating their own festival of lights by gently glowing green and creating undulating trails of light on the forest floor.’ This image was captured near Kaziranga national park, Assam, India. Photograph: Naitik Patel/BES Capturing Ecology 2022 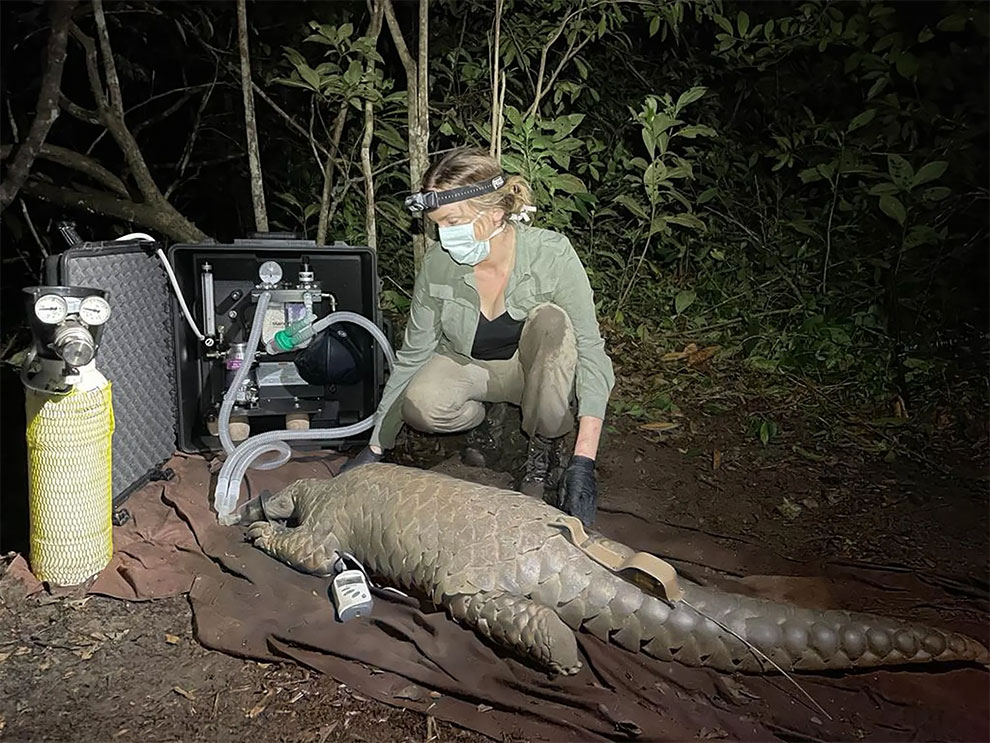 PhD student Smith with a 42kg male giant pangolin (Smutsia gigantea), the largest on record, found in Gabon, Africa by Dr David Lehmann and the Agence Nationale des Parcs Nationaux. The pangolin had just had tissue samples taken and a GPS fitted in order to learn more about this incredibly elusive and rare species. Photograph: Ruth Smith/BES Capturing Ecology 2022 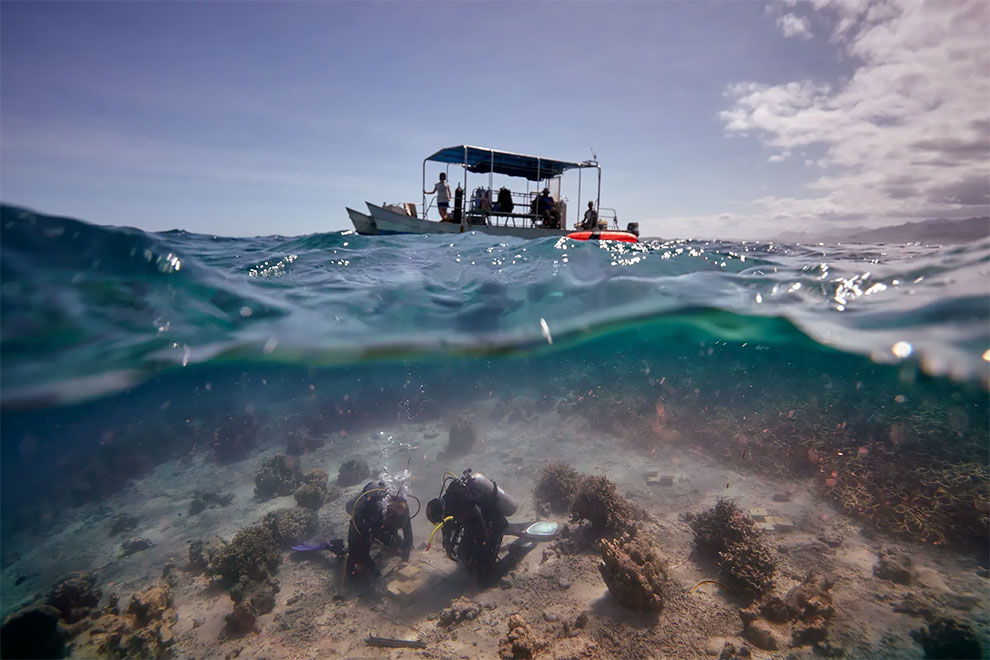 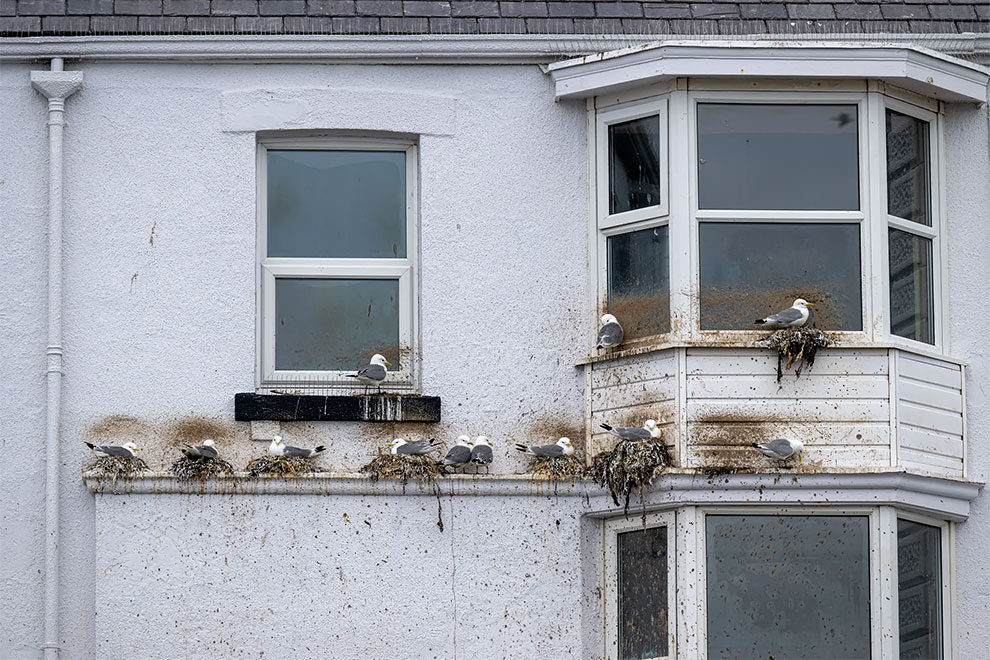 A group of black-legged kittiwakes nesting on the side of a building in Bridlington, England. It has become increasingly common for this species of seabird to breed in coastal urban areas, on manmade structures which represent the cliffs they would traditionally call home. Photograph: Joshua Copping/BES Capturing Ecology 2022 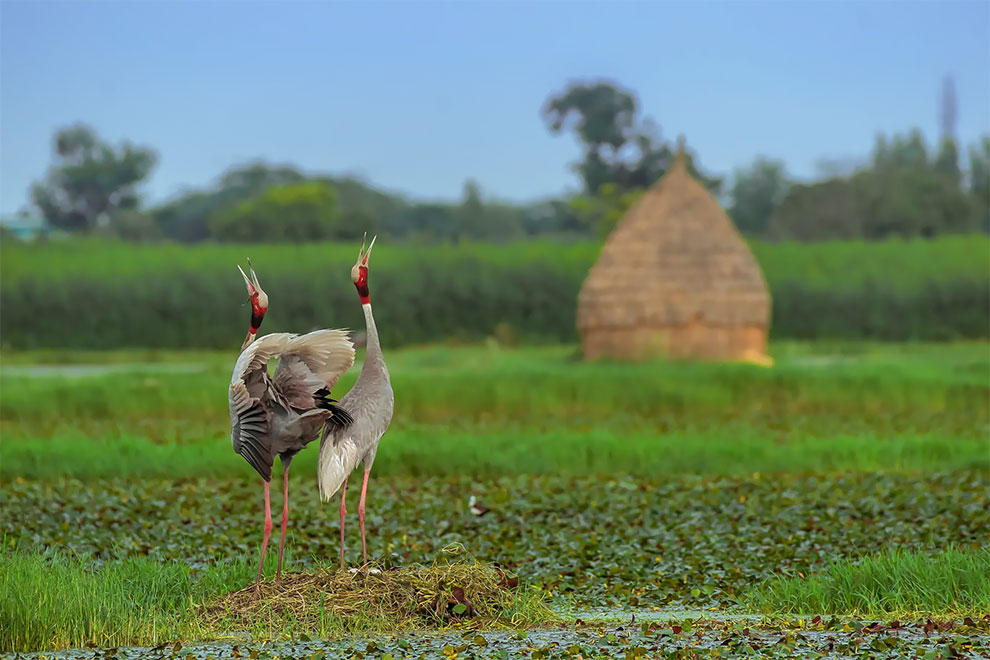 Halder said: ‘The sarus crane is known for its majestic courtship display – if you look closely, you can spot the eggs as well. A pair for life! If unharmed, they return to the same nest for breeding. What I found more interesting, however, is the dome-shaped structure, amidst the crop field, in the background indicating that this pair co-habit.’ This picture was taken in Rajasthan, India. Photograph: Subhashis Halder/BES Capturing Ecology 2022 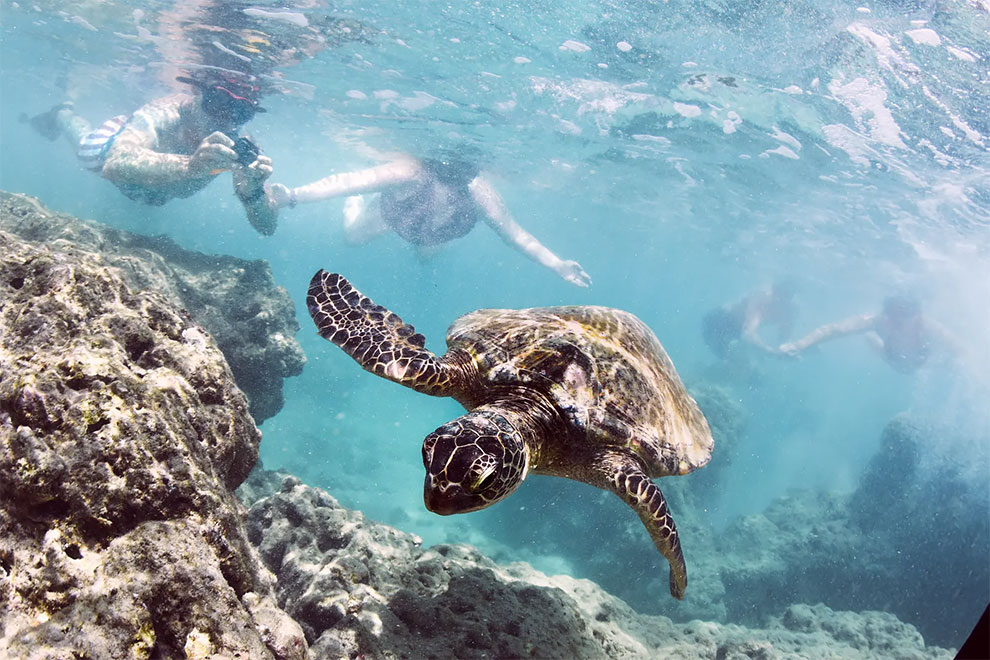 A turtle swims through Hanauma bay in Hawaii with a group of tourists watching from behind. Photograph: Mackenzie Meier/BES Capturing Ecology 2022 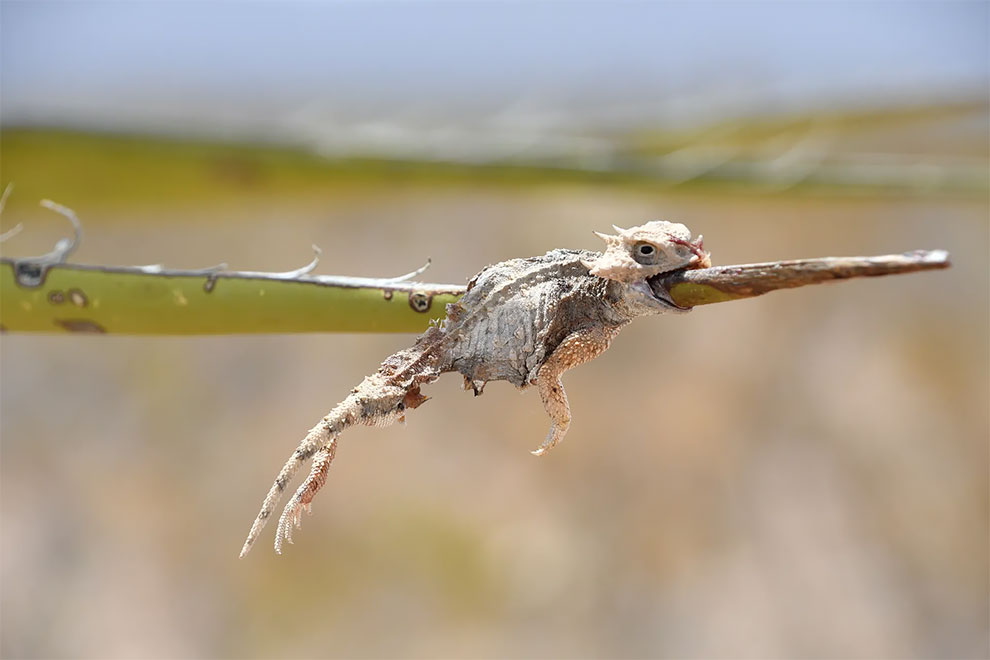 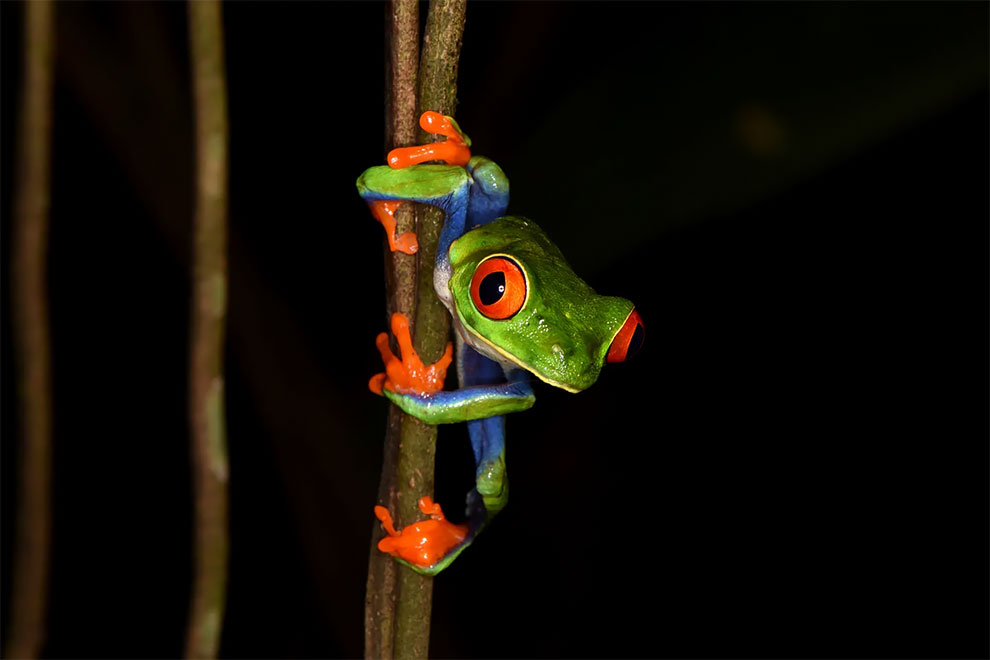 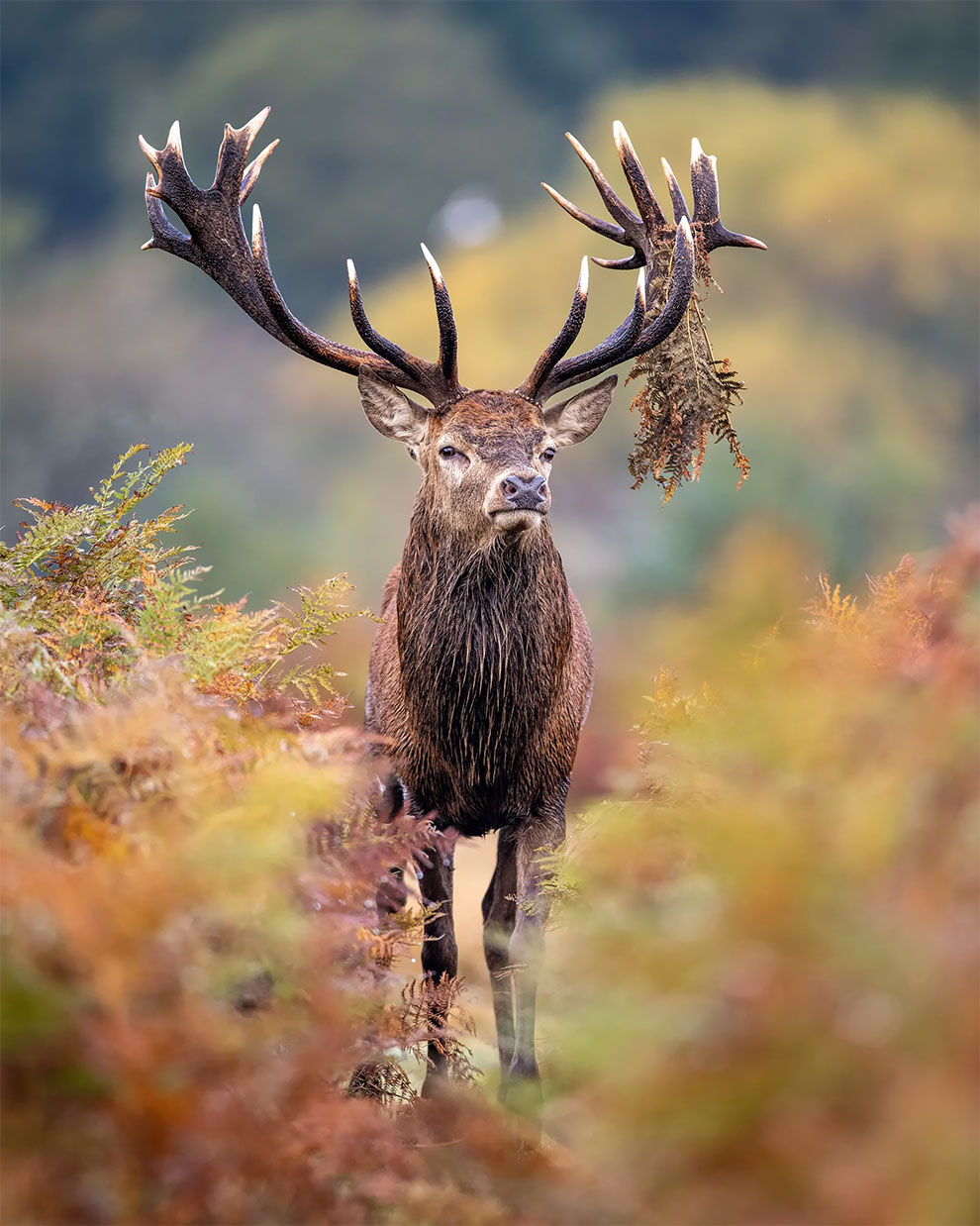 Individuals and populations highly commended – The Chase by Côme Denechaud 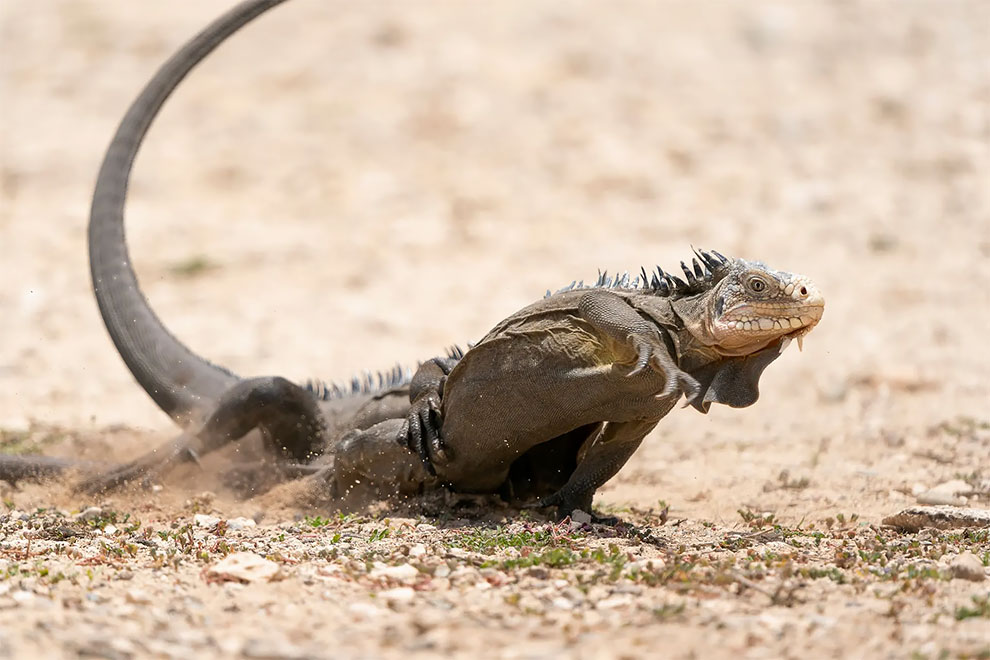 Petite Terre hosts the single biggest population of the critically endangered Lesser Antillean iguana, with more than 10,000 scattered across this protected yet small uninhabited island. It is threatened by habitat destruction from human activities, and competition from its sister invasive species, the green iguana. This small female came racing through an opening in the thorny bushes, chased by an inquisitive male trying to mate. Photograph: Côme Denechaud/BES Capturing Ecology 2022 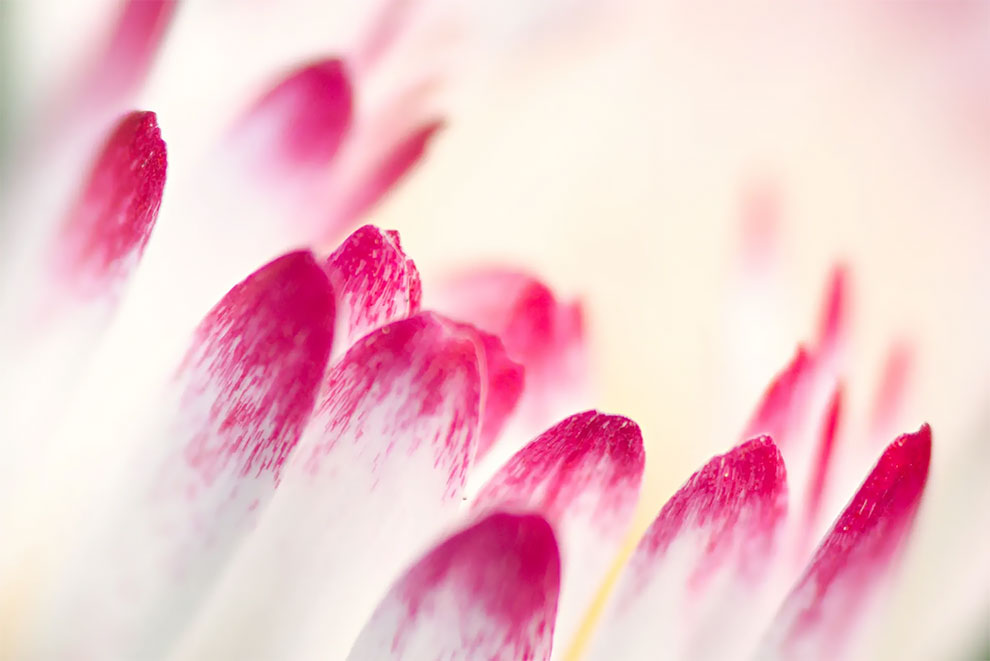 As the day comes to an end, the common daisy (Bellis perennis) closes its inflorescence. The bright red contrasts against the pure white of the ray florets. The Latin name of this species translates to perennial beauty, a plant that can persevere even during harsh times. This picture was taken on a garden lawn in Brentford, UK. Photograph: Mathew Rees/BES Capturing Ecology 2022 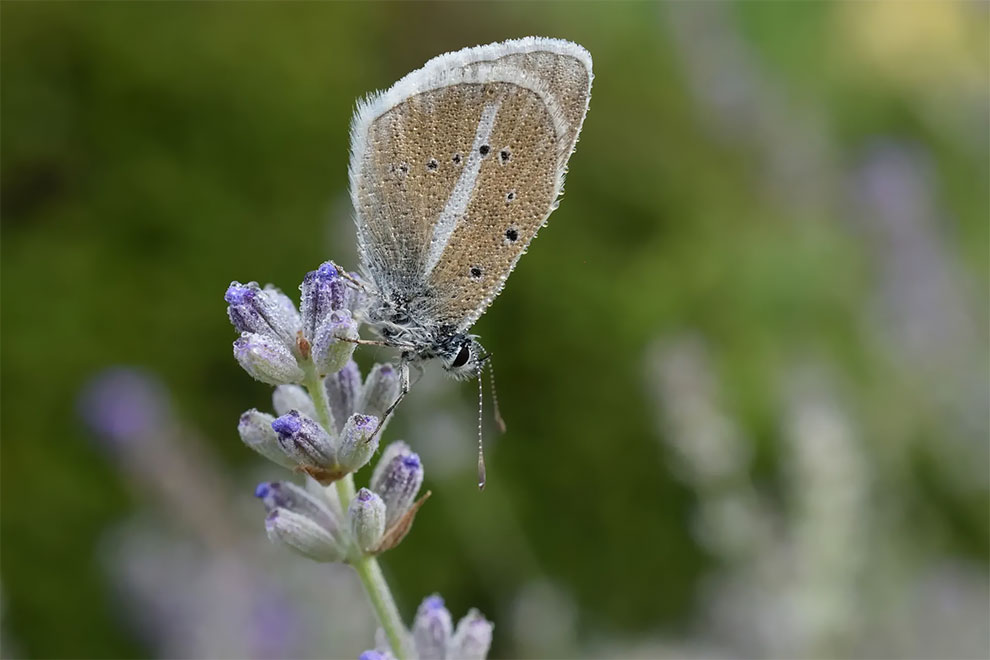 A Damon blue butterfly (Polyommatus damon) – a common late summer species in mountainous regions of Europe – is covered by dew drops at dawn, as it patiently waits to be warmed by the day’s first sunlight in Cogne, Italy. Photograph: Francesca Martelli/BES Capturing Ecology 2022 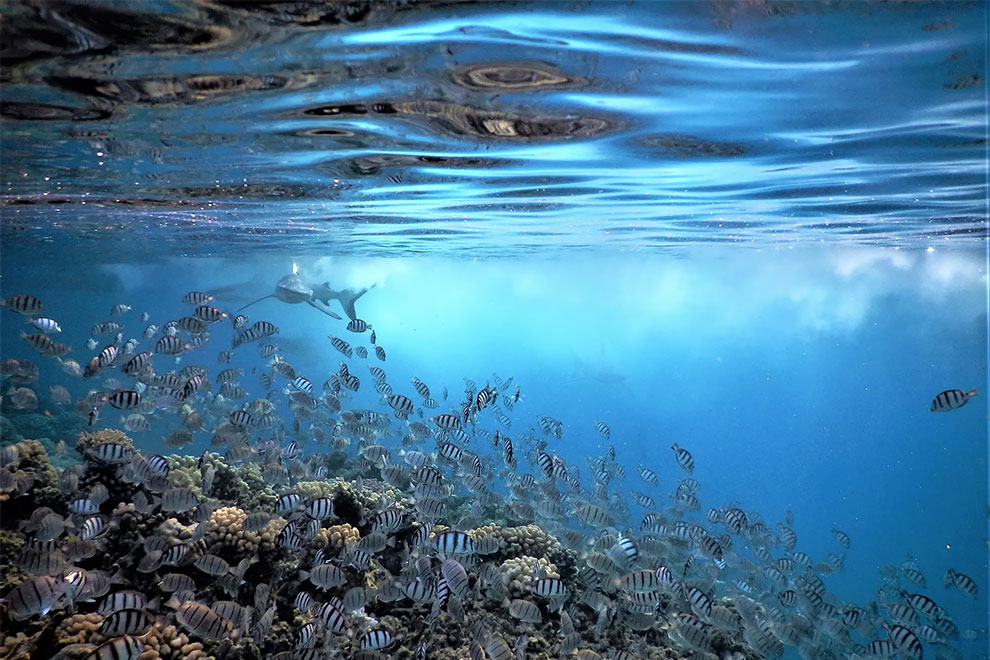 Overall winner – A Light in the Shadows by Roberto Garcia Roa 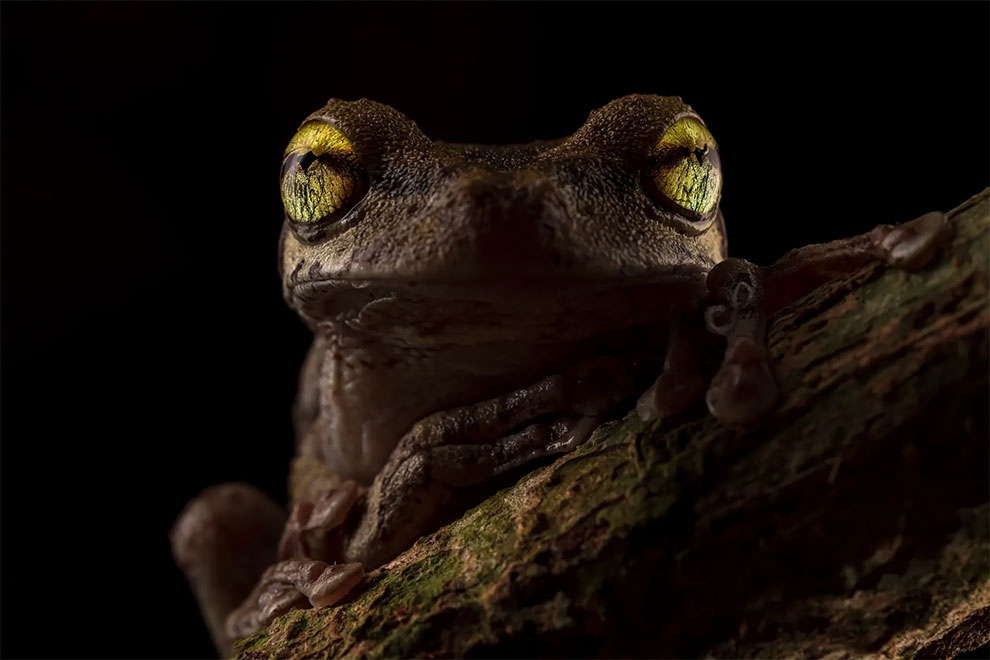