Celebrating the Beauty of Australian Birds: A Look at the Winning Images from the 2022 BirdLife Australia Photography Awards

The 2022 BirdLife Australia Photography Awards have recently revealed their winning images, selected from a pool of over 5,600 submissions from photographers worldwide.

The competition not only served as a way to raise funds for bird conservation efforts, but also as a celebration of the beauty and diversity of these amazing creatures. This year’s categories included “Bird Portrait,” “Special Theme (Australasian Robins),” “Bird Behavior,” and “Birds in Backyards,” just to name a few. Take a look at some of the stunning photos that made it to the winning list in the gallery below. 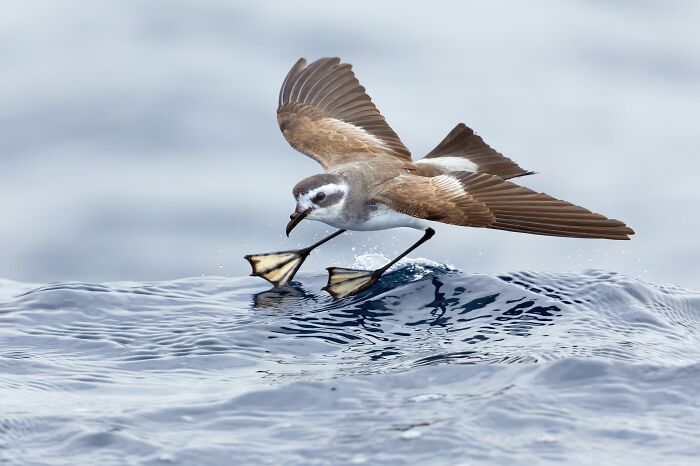 “Storm petrels regularly exhibit this water-skiing behavior whilst searching for food on the water’s surface, but I have never seen such a perfectly timed photo of the moment of impact.” White-faced Storm Petrel, Near Eaglehawk Neck, Tas 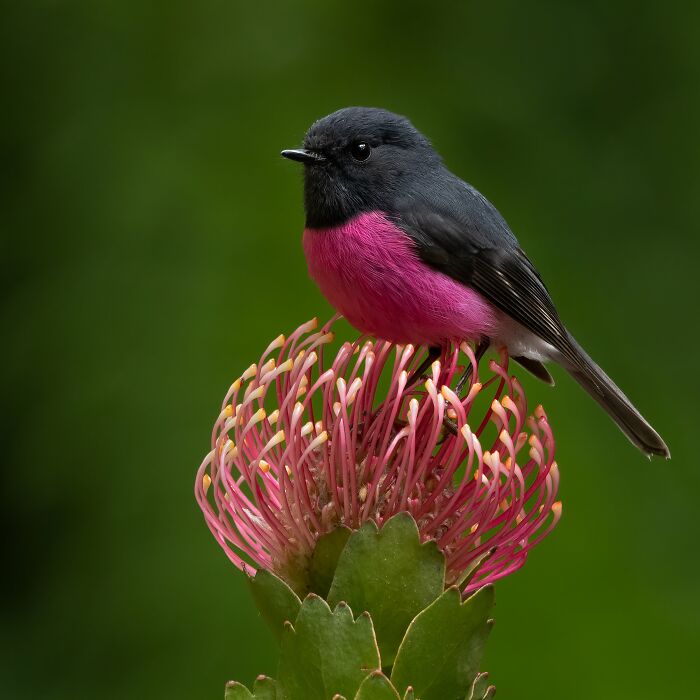 “I had this image in mind way before I actually took it, I always imagined how this pretty bird would look on a flower and what would catch the eye: the flower or this bird, and hands down it is always the bird. I knew this bird’s spot, and I knew that if I waited patiently nearby it would eventually come down. This took almost around 6 months for this to happen and I was lucky I had almost the perfect flower in place when God smiled upon me.” Pink Robin, Otways, Vic 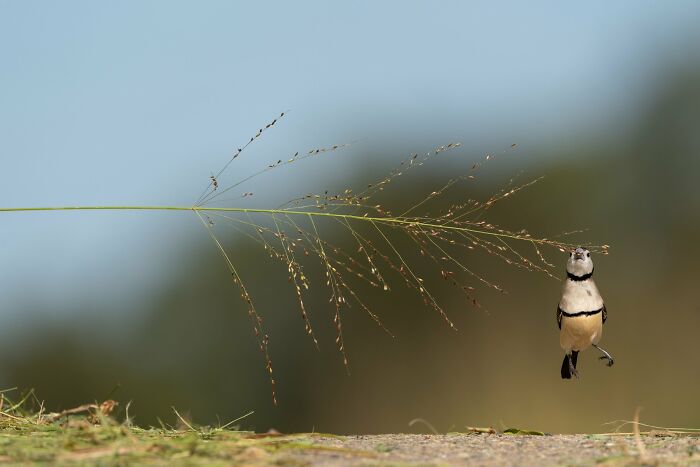 “Sometimes you come across a subject that is so focused on what they are doing, they don’t really care if you are close to them. This was the case with this little Double-barred Finch which was on a mission to get to as many seeds as it could. As I lay a few meters away, it started to pull down a large grass seed head, which I captured here, then it held it down with its little foot and started eating the seeds. It was a moment I was happy to witness and showed how many characters these little birds possess.” Double-Barred Finch, Manly, Brisbane, Qld

Birds In Flight: “My Pearl” By Lawrence Chan (Shortlist) 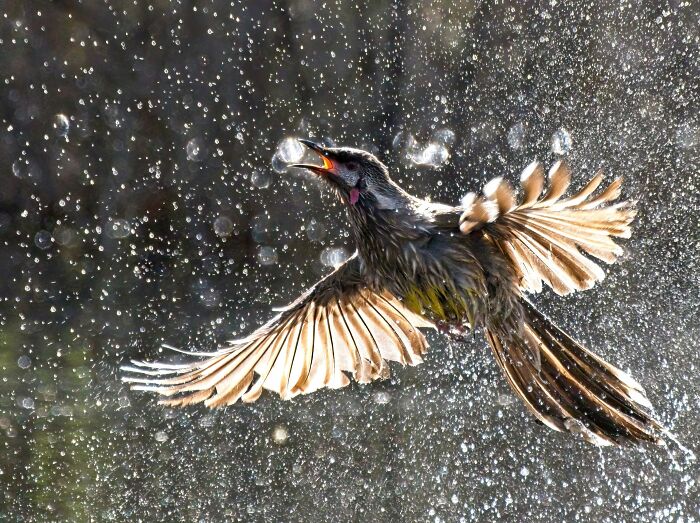 “I was lucky to capture this special moment. This Red Wattlebird was drinking and splashing water. It was the optical illusion that the brightest and largest bokeh superimposed the bird’s open mouth. I positioned myself about 15 meters away facing a darker background. This helped the camera to focus and track the bird. Although wattlebirds are very commonly found in the city parks, I have tried to capture a beautiful moment from a different perspective.” Red Wattlebird, Newport, Vic

Backyard Birds: “Good To Be Alive!” By Patrick Kavanagh (Shortlist) 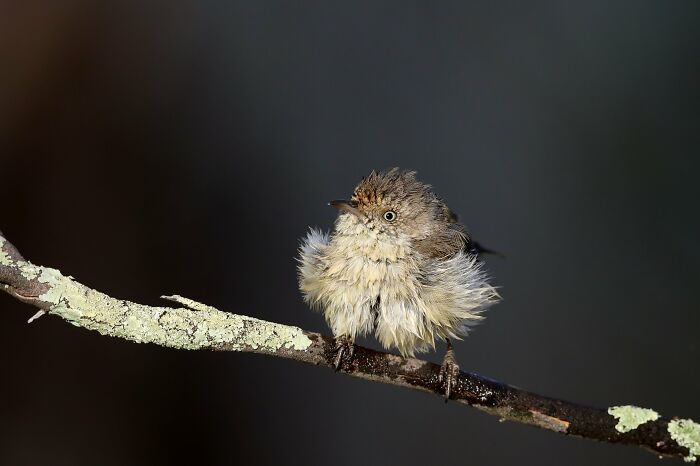 “Our backyard birdbath attracts many species of woodland birds, but Thornbills rule the roost. And they seem to get so much more soaked than other birds. Their voluble chatter as they splash around may well have other meanings, but it sounds to me like a true expression of delight. No matter how many times I see them or how many photos I have of them when I hear their calls I just have to go and watch them.” Buff-rumped Thornbill, Strangways, Vic 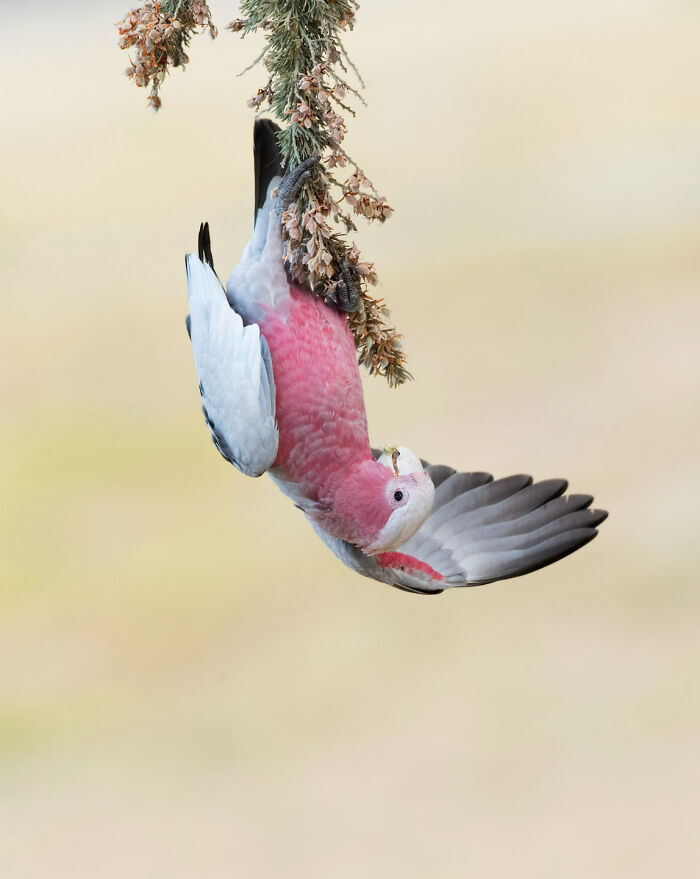 “Galahs are very playful birds and first thing in the mornings they fly around making lots of noise and generally being a little crazy. I captured this Galah messing about as it suspended from a small tree branch feeding. It was very low light and difficult to photograph, but the behavior was so funny and it was worth attempting an image. It happened very quickly, so I didn’t get ideal settings but managed this shot.” Galah, Coodanup Foreshore, Mandurah, WA 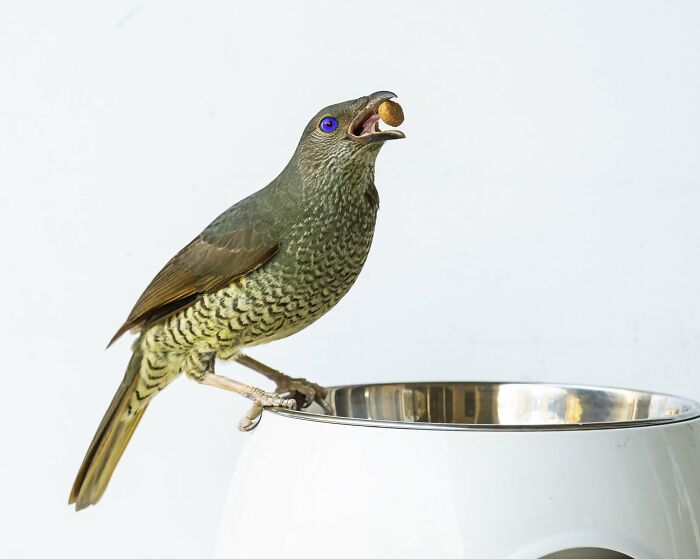 “Each afternoon this Bowerbird watches in anticipation as I feed my dog in the backyard. It skulks around until it sees an opportunity to rush in and steals a kibble or two from the bowl before my elderly dog can respond to this classic case of daylight robbery.” Satin Bowerbird, Woollamia, NSW 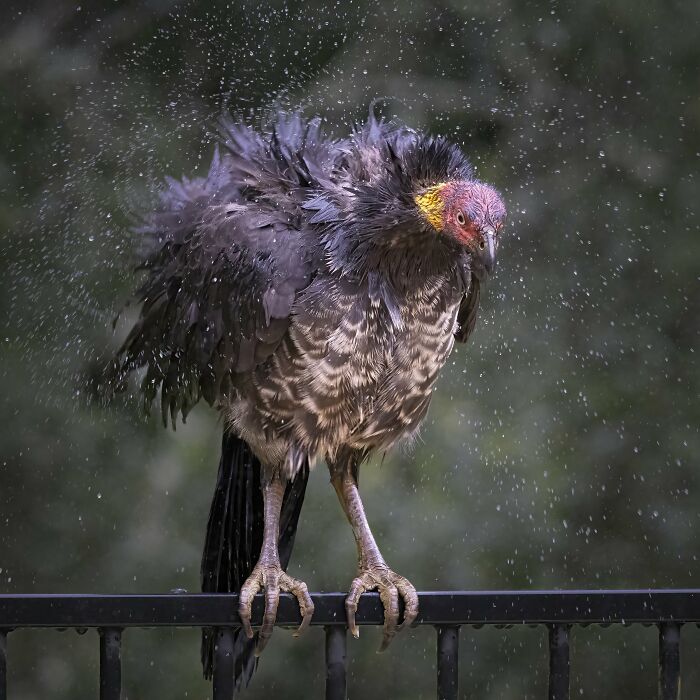 “It was raining heavily and this Brush Turkey stood on our back fence with the rain dripping off it, looking miserable! Every now and then it would give a vigorous shake with feathers and water droplets going in all directions. The light was low and to keep the shutter speed up I had to work with a high ISO, causing noise which I reduced in post.” Australian Brush-turkey, Brisbane, Qld 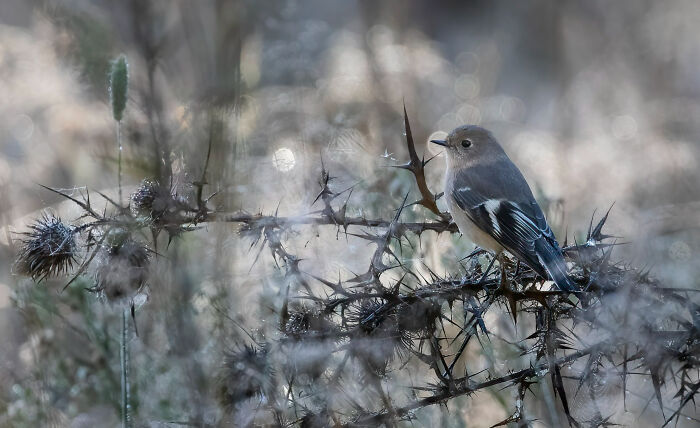 “I hope the viewer of this image enjoys the muted winter colors and the textures of the ominous spikes and prickles that this delicate, beautiful little bird finds safety in. The subtle bokeh and glistening morning dew add a contrast of softness to the image which brings a nice balance.” Flame Robin, Bicentenial Trail to Red Rock Gorge, Canberra, ACT 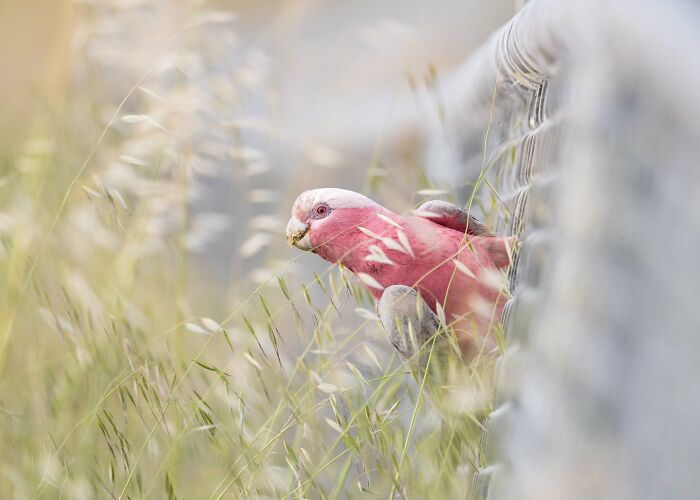 “The Aussie in me calls Galahs ‘Pinks’; they are always a wonderful sight to see ambling along median strips nibbling on flowers, or screeching at each other over the best position on tree branches. This clever female Galah had worked out how to get to the tasty grass seeds by climbing up the side fence and leaning out as far as she could to grab them swaying in the breeze.” Galah, Coogee, WA 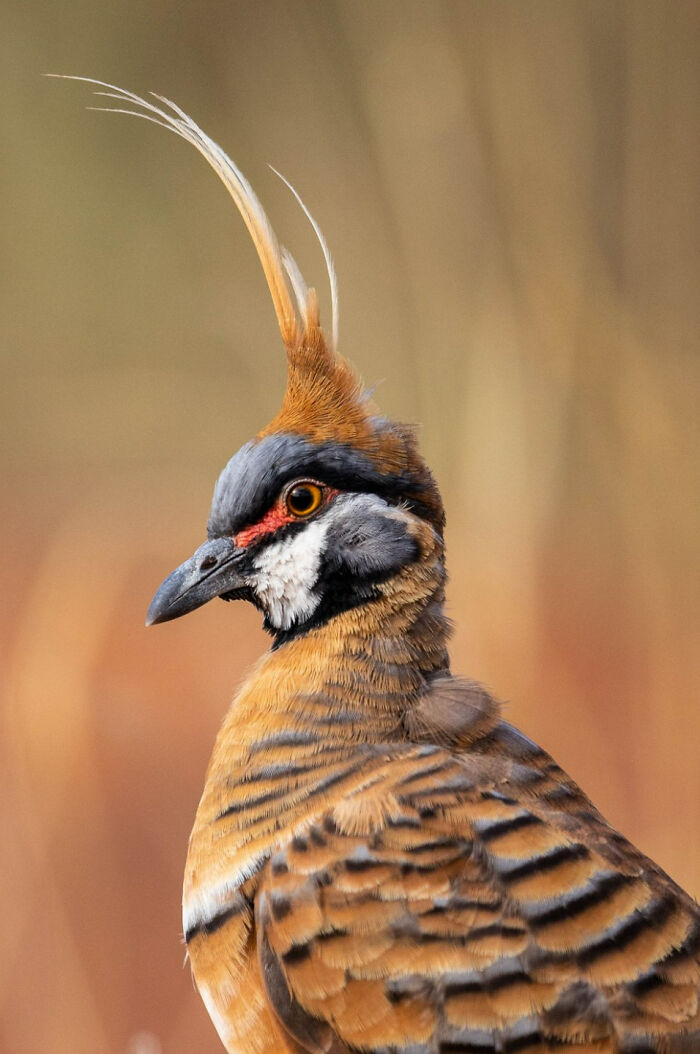 “Ormiston Gorge is situated in the ancient landscape of Tjoritja / West Macdonnell Ranges, which boasts spectacular rock formations, native fauna and flora. On the 8.5km walk around Ormiston Pound which meanders through the scenic gorge and large flat expanses I came across a few Spinifex Pigeons. Most were unwilling to hang around for a photo, but this one gave me enough time to crouch down and fire off a few shots. The distinctive plumage of the Spinifex Pigeon and the stunning crest makes it a perfect match for these arid landscapes. It easily blends in amongst the rocks and spinifex of central Australia. This particular shot appeals to me because the background colors perfectly reflect the colors of the Spinifex Pigeon.” Spinifex Pigeon, Alice Springs, NT

Human Impact: “You Had Me At Hello” By Suzanne Bray (Shortlist) 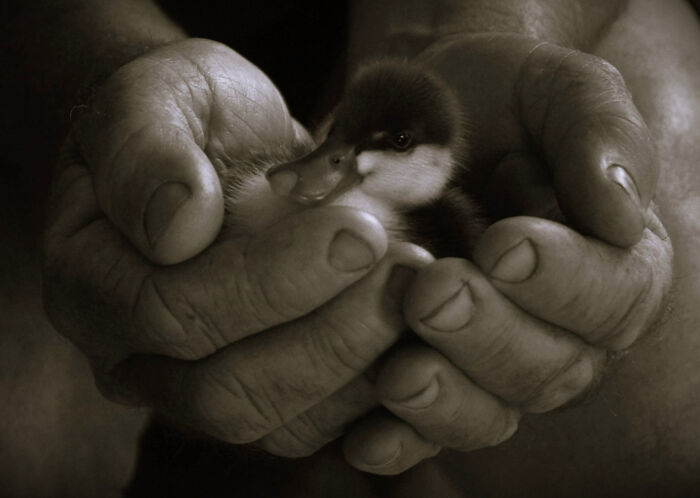 “This unplanned photo was taken while visiting a friend who volunteers with wildlife rescue. Four tiny babies were rescued after Mumma was attacked by a feral cat …. all four babies were found wet and shaking in nearby grass beside the road at Hay Point. “Spike” was the smallest of the four and needed assistance with feeding. Sadly, little Spike being already frail was attacked by his larger bossier brothers and did not survive to be released into the wild.” Radjah Shelduck, Mackay, Qld

Birds In The Landscape: “Emu Mist” By Christian Spencer (Shortlist) 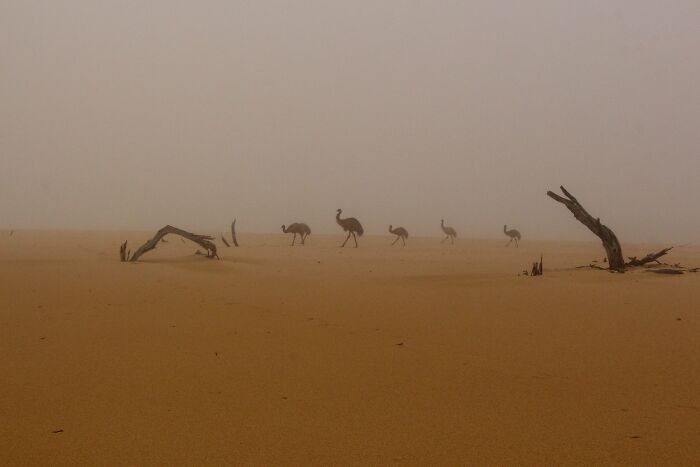 “While walking through the spectacular sand dunes in the Eyre Peninsula a thick mist descended turning the light into a sepia color. A small group of Emus emerged. I waited for them to pass behind the twisted and half-buried trees and managed to capture this unique photograph.” Emu, Coffin Bay, SA 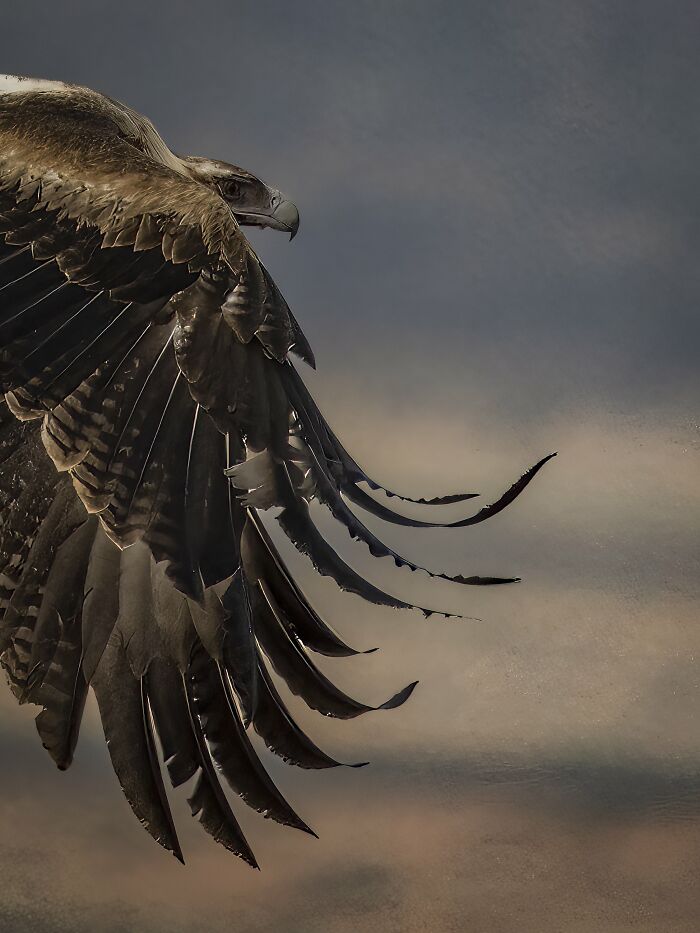 “I drive my husband nuts when traveling as he is forced to stop at EVERY Wedge-tailed Eagle spied on, usually for no reward. This one was on the roadside feasting on some roadkill. As we approached, I could see the bird was preparing to take off. I quickly got out of the car and got down low just in time to capture him taking flight. I cropped the photo closely to focus on the wings as I love the way their fingers curl up in flight.” Wedge-tailed Eagle, Hawker, SA 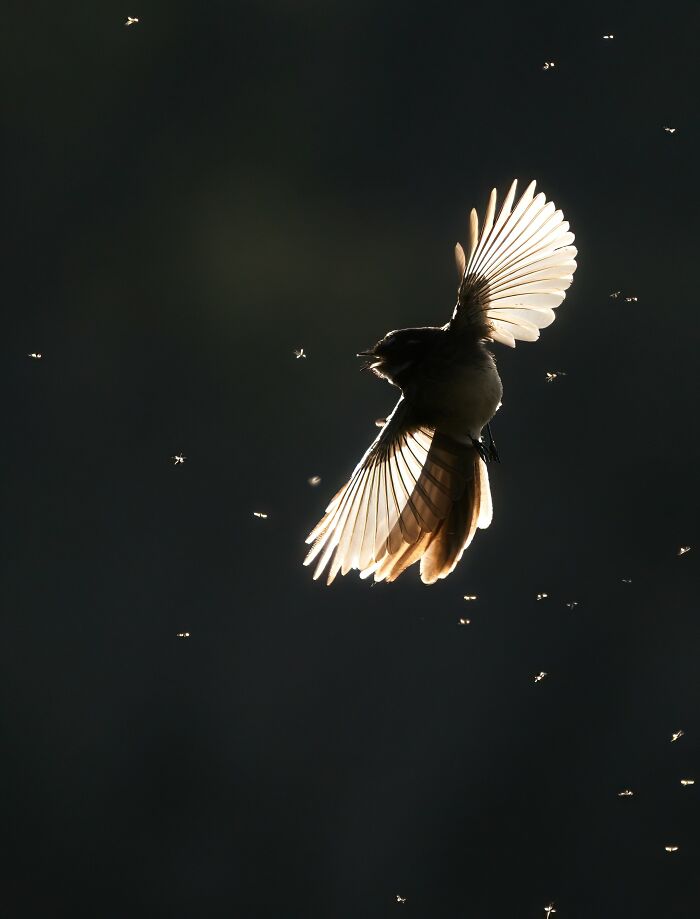 “Grey Fantails are common birds in our city parks. Through the light, actions, and back-lit wingspan, I have tried to express the beauty of this common bird. I was able to choose a darker background to highlight the wings and the beautiful dance. It was a great challenge for me to capture the fast movement.” Grey Fantail, Port Melbourne, Vic 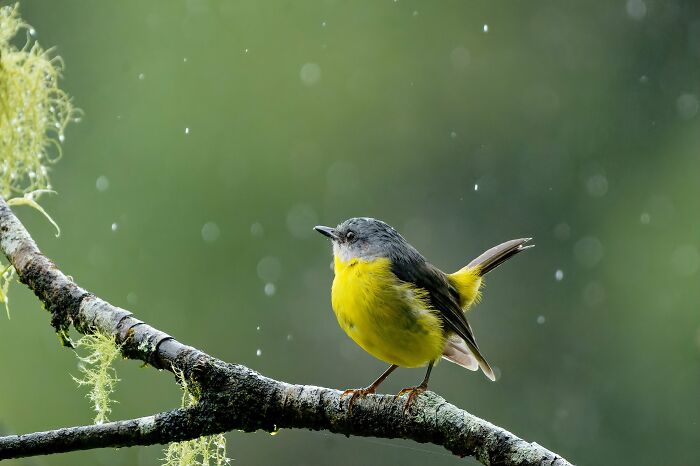 “I actually took this photo mostly by chance. At the time I was hoping to photograph a catbird which had been waking me early each morning. As I waited for the catbird to fly down into the tree I was watching, this little robin just popped up onto a nearby branch. The resulting photo is a little under-exposed, and if given the chance I would have exchanged the teleconverter for a wider aperture. In the short moment the robin was on the branch I got in a few handheld shots, one of which is this entry here. I love this photo because the robin is showing off their stunning yellow while looking wistfully into the distance, seemingly not bothered by my camera clicks. I never got that catbird shot in case you were wondering.” Eastern Yellow Robin, Possum Creek, NSW 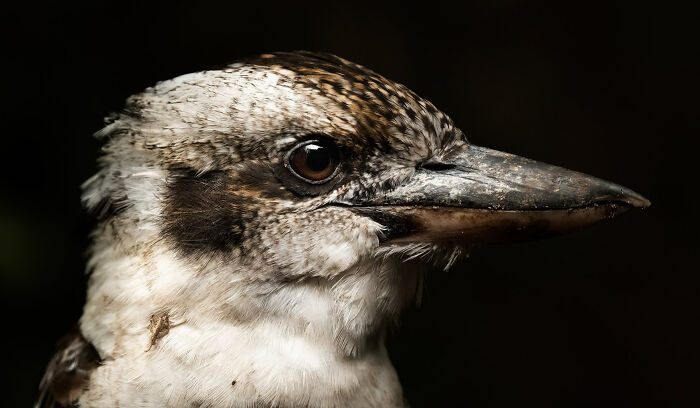 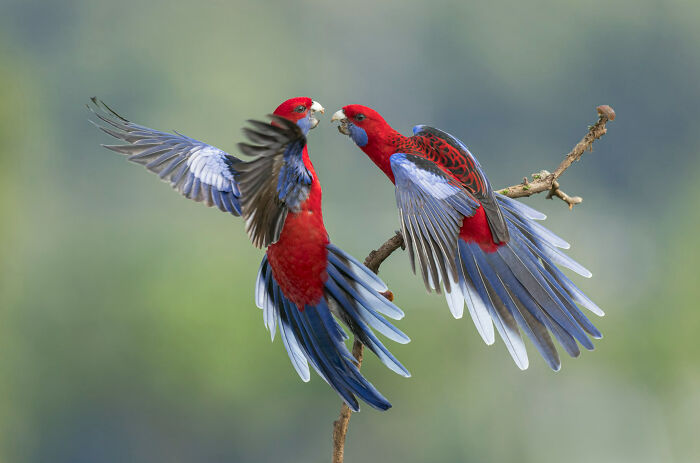 “The bright, gaudy combination of red, blue and white conjures up images of Uncle Sam’s top hat or “The Stars and Stripes”. I am really attracted to this photo – I love the interaction between the two birds, but I think my favorite feature is the flared tail feathers. We have so many beautiful parrots in Australia, but it’s hard to look past this species when it comes to beauty.” Crimson Rosella, Lamington National Park, Qld

“Salute To The Sun” By Finnian Bissell (Shortlist) 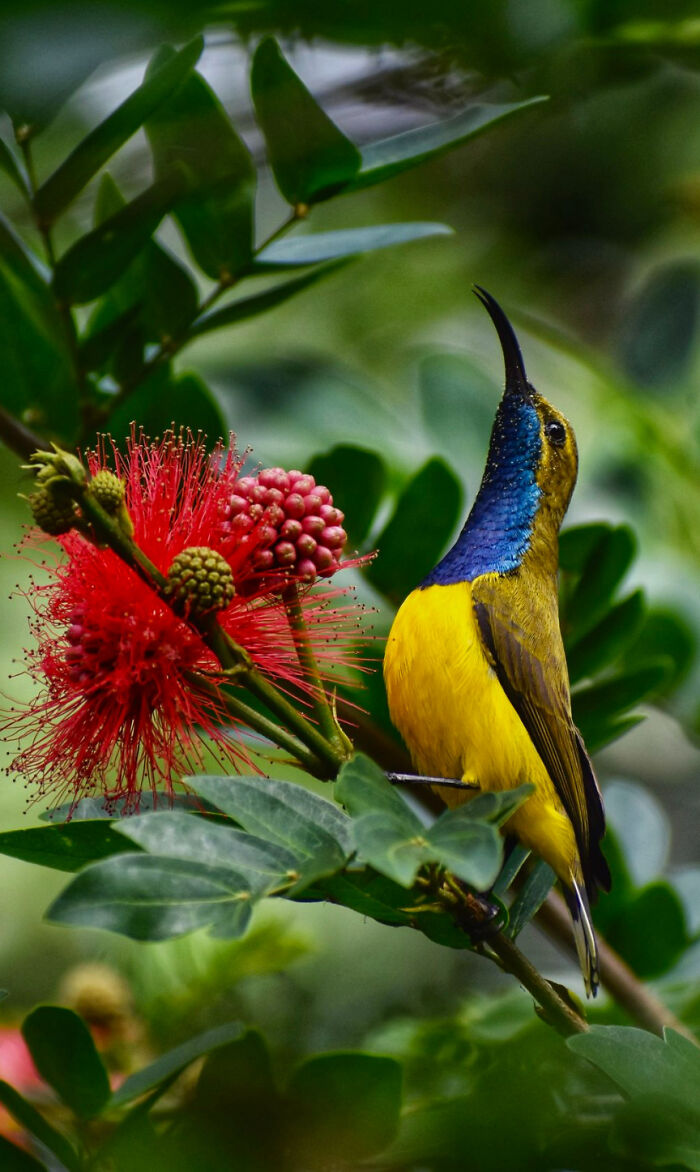 “I was almost late leaving for the airport because of this bird. I waited in the same spot for close to 40 minutes, watching for the sunbirds to land on this particularly tasty-looking Red Powderpuff Flower. Considering this was my last time leaving my grandma’s home of 50 years in Cairns, I was more than happy to wait. The Olive-Backed Sunbird has been one of my Grandma’s favorite birds, one that she will miss dearly when she moves to the Gold Coast. I felt the need to take these photos as a salute to Grandma’s home, as It felt like 50 years of memories were all disappearing so fast. Her home has been host to some crazy and wonderful flora and fauna over the years. From massive diamond pythons slithering through the roof to green tree frogs on the toilet, this place was like my own David Attenborough documentary. So many amazing things to see and hear about. That’s why this photo means a lot. Never once did I not see something that amazed me at my grandma’s house, even up until the last minute.” Olive-backed Sunbird, Edge Hill, Cairns, Qld

Youth: “Pair Of Bee-Eaters With Prey” By Finn Cupper (Shortlist) 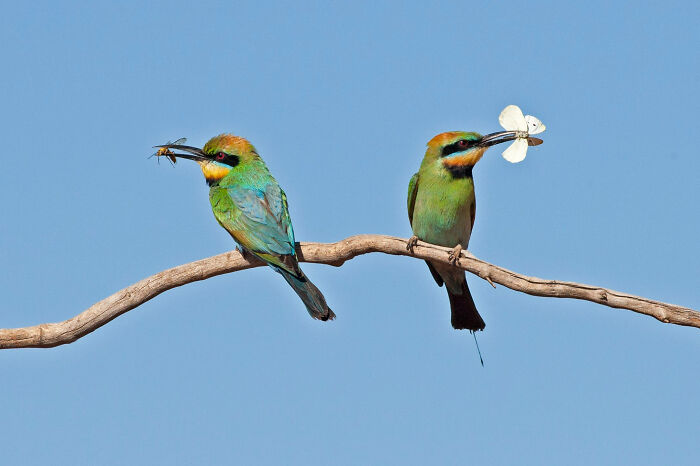