A Martyrology of MH370

“Almost six months have passed since the Malaysian Airlines MH370 disappeared. Although authorities concluded that the plane crashed in the remote Indian Ocean and lost all the passengers, many family members refuse to accept that conclusion. They hope that they are still alive. However, public interest towards this incident has faded, so I decided to record what these family members are still going through and shed light on this mysterious incident once again. I thought that portrait-style pictures showing family members together with the missing passengers’ mementos would tell a story. Before I started the project, I assumed I would find a couple of families at most, but the victims’ relatives really wanted to speak out about the incident and how much they are suffering now.

Finding the right object to show their grief was quite simple because they had already kept objects, or mementos, with them since the incident; objects which now have a special meaning for them. The relatives often had more than one memento and these included a wide variety of things, such as photos, dolls, pets, books, furniture, a whole house, and records of chat messages. Every item held a different meaning for each person. I was very careful not to hurt their feelings or invade their privacy when taking these pictures. My first priority was showing my respect for the family members, so before photographing them, I would wait to ask their permission to take pictures until I felt that they were ready and would always spend some time listening to them talk. Sometimes this brought tears to my eyes.

This incident was different from any other disaster story I’ve covered because we still don’t know what exactly happened to the missing plane and passengers. The family members desperately want to know what happened to their loved ones and where the missing plane is. I don’t think we should stop searching for the plane until we can find out what happened. That will be the only way to comfort the grieving family members and stop their crying”. – Kim Kyung-Hoon via Reuters. 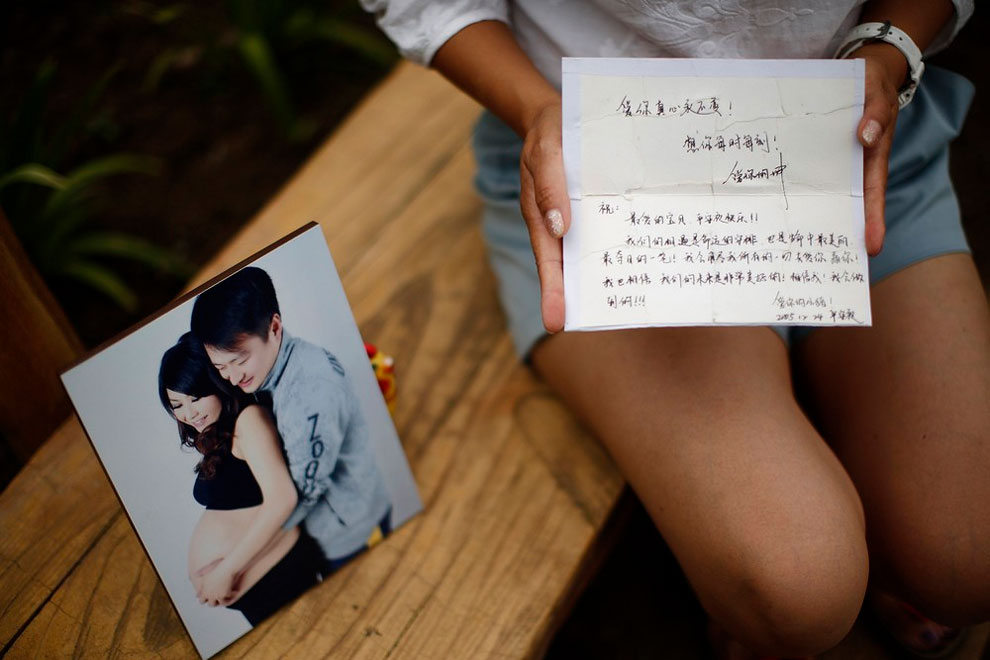 Cheng Liping, whose husband Ju was onboard Malaysia Airlines Flight MH370 which disappeared on March 8, 2014, shows a picture of she and her husband together and an old card with a message given by her husband, at a park near her house where she and her husband used to visit during an interview with Reuters in Beijing July 24, 2014. Cheng said her life has been totally changed since the incident. Their two little sons, who don’t know about this incident, keep asking her when their dad is coming back. Six months after Malaysia Airlines Flight MH370, with 239 mostly Chinese people on board, disappeared about an hour into a routine journey from Kuala Lumpur to Beijing March 8, loved ones of missing passengers derive what comfort they can from what’s left behind after the world’s greatest aviation mystery. More than two dozen countries have been involved in the air, sea and underwater search for the Boeing 777 but months of sorties failed to turn up any trace – even after narrowing the search area to the southern Indian Ocean – long after batteries on the black box voice and data recorders had gone flat. (Photo by Kim Kyung-Hoon/Reuters)
END_OF_DOCUMENT_TOKEN_TO_BE_REPLACED