A Chilling Recipe for Eternal Life 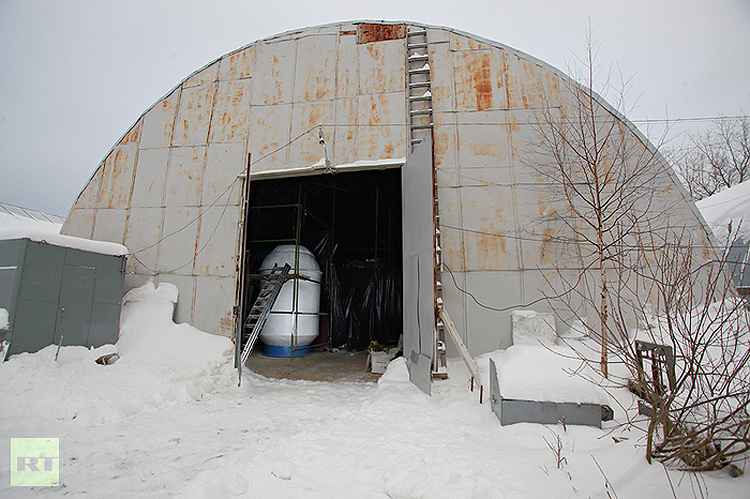 What if it takes one single pill to rewind your clock of life? No more health issues, you are no longer getting old… Impossible? According to some, not in the future. And as a Russian cryonics firm insists, they have the way of taking you there. 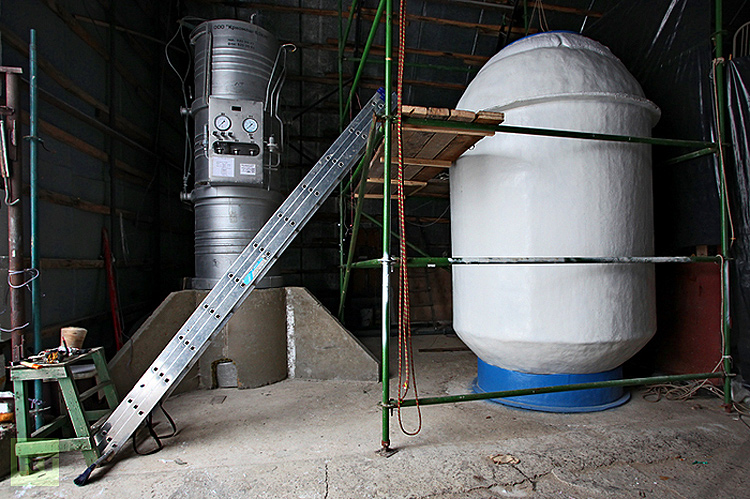 A cryostat with customers’ bodies.

Cryonics is a complex of knowledge aimed at low-temperature preservation of bodies of those humans or animals that can no longer be sustained by contemporary medicine, with a view to their possible reanimation in the future, when appropriate technologies and cures will supposedly be available.

The backbone of this ideology is based on the assumption that people who are considered dead by today’s medical and legal standards may not necessarily be dead from the point of future medicine – the one based on deeper knowledge and supported by appropriate techniques. This is the reason why at the Russian cryonics firm they refer to their clients as “patients”… even to the dead ones. 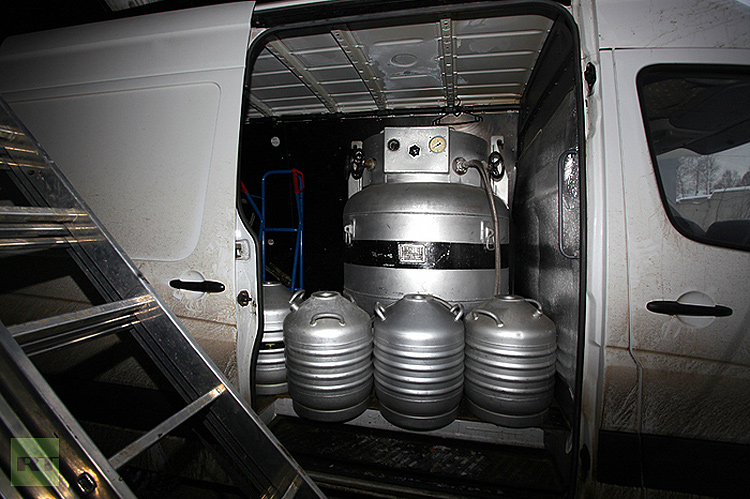 A vehicle with liquid nitrogen. 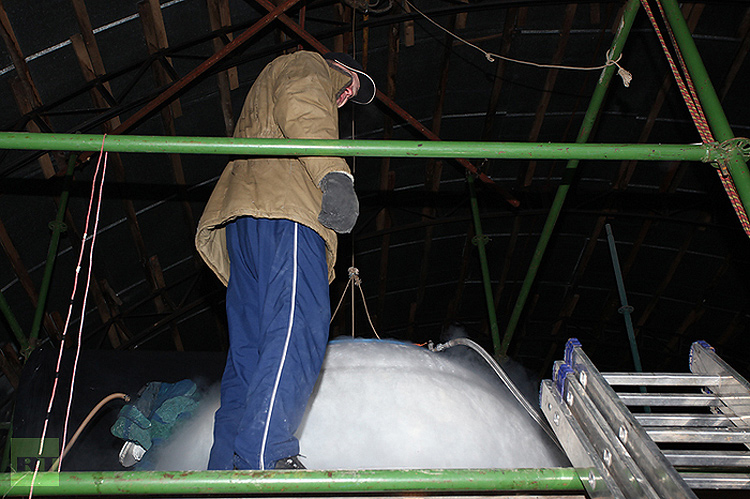 A worker is getting ready to fill the cryostat with nitrogen. 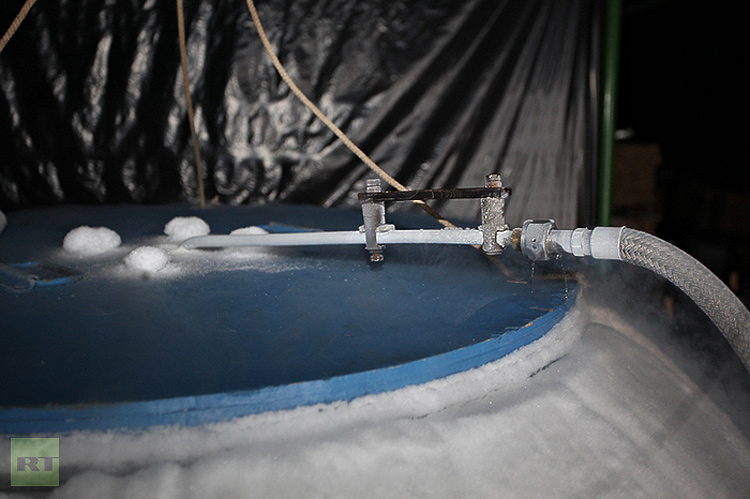 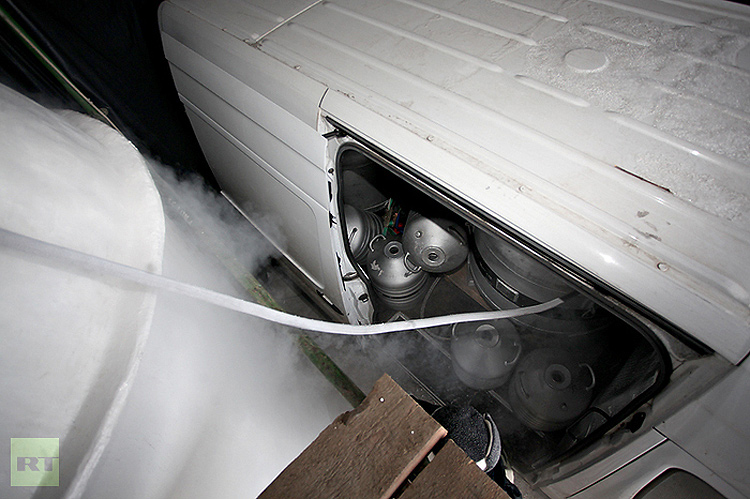 Due to liquid nitrogen, the temperature in the Dewar vessel. 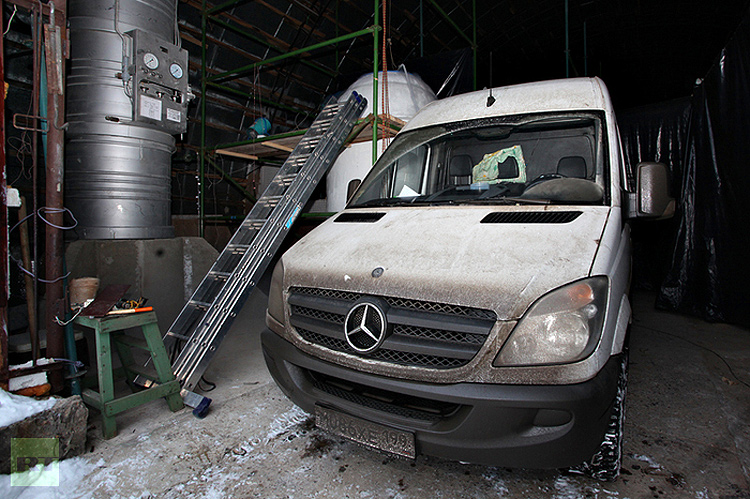 A vehicle that has delivered the nitrogen. 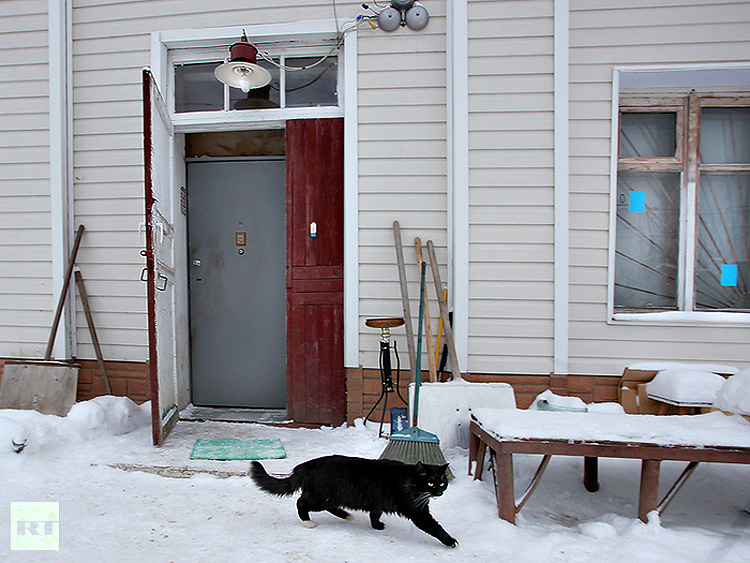 An entrance to the out-of-town KrioRus office. 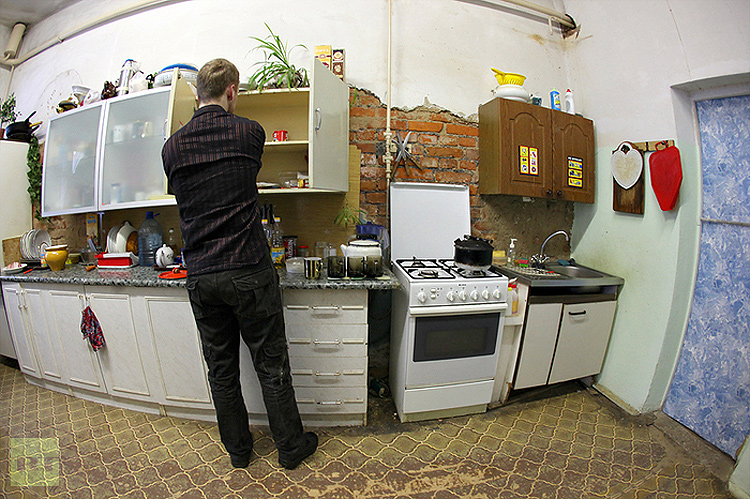 Speaking in an out-of-town, somewhat shabby storage facility that belongs to KrioRus, Danila Medvedev, the head of the company’s board of directors, was putting all his effort into trying to assure me that rejuvenation is not going to be a problem in the future.

“Aging is a problem of today, because we don’t know how it works,” Dr. Medvedev begins. “In 100 years or so it will only take one single pill to alter the epigenetic regulation in all cells of your body in accordance with a required program.” 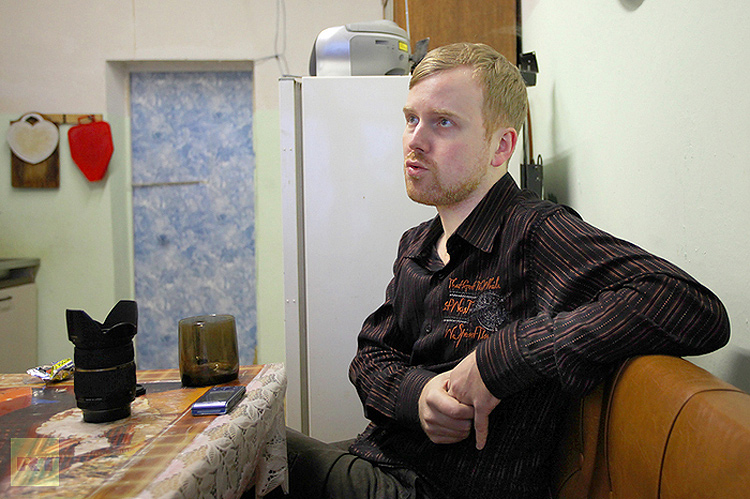 The managing director talks about the company’s work.

“In other words,” he continued, “the smart pill, depending on how exactly you are aging, will make, for instance, liver cells increase the expression of a particular gene three-fold, while nanocapsules with necessary proteins will do their job and activate the required genes. If you have excess fat deposits in your body, the cells of fat will be instructed to dedifferentiate into stem cells and creep away to where they are needed to increase regeneration processes, and so on.” 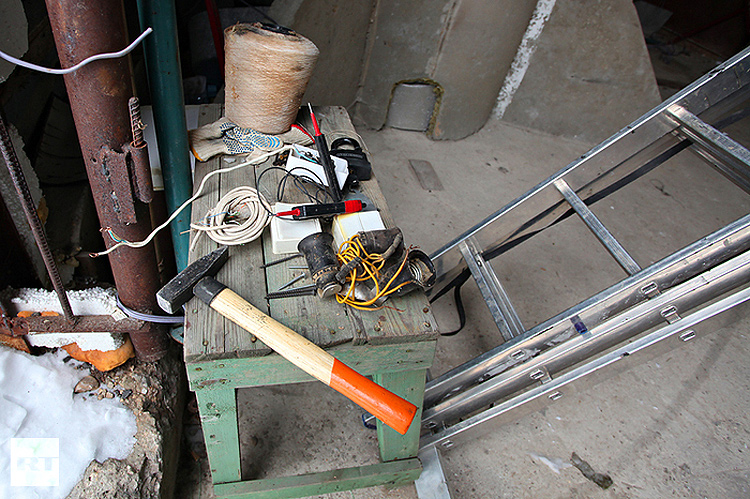 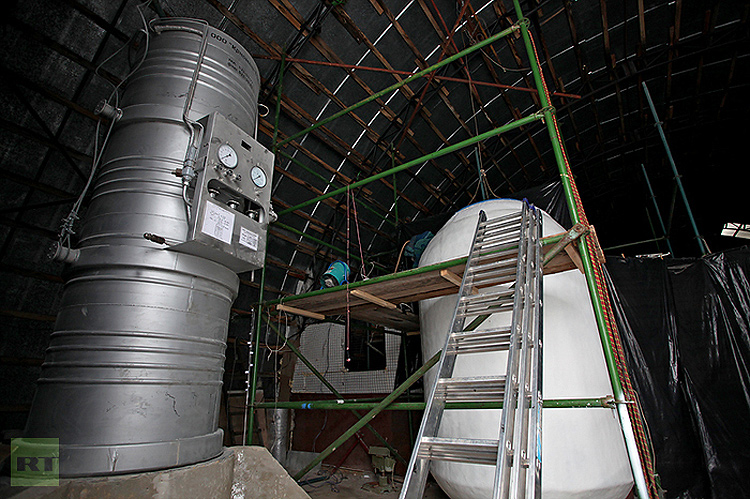 A ladder toward the unknown. 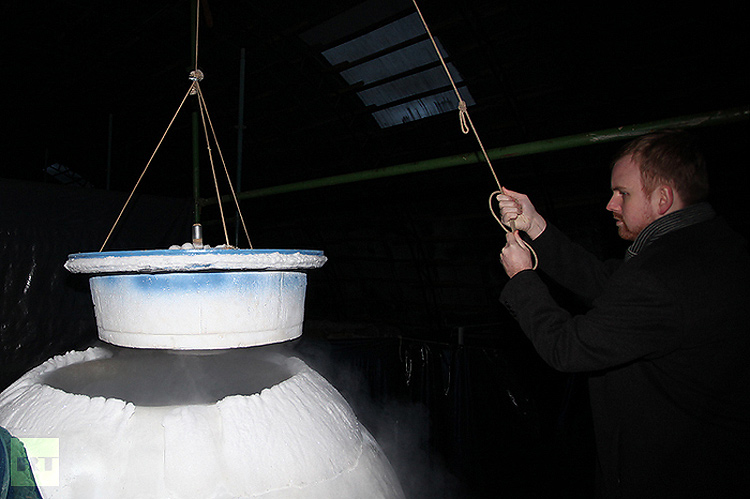 The door to the future is nearly open. 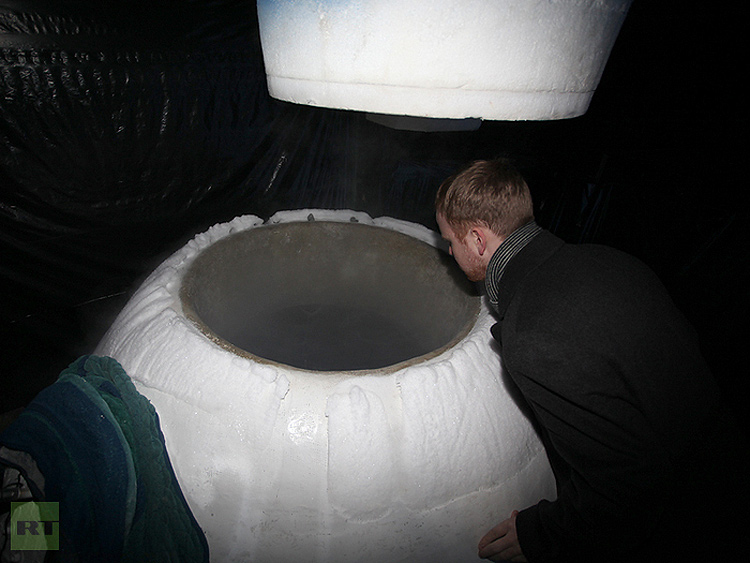 The company director peeps inside and checks if all is okay. 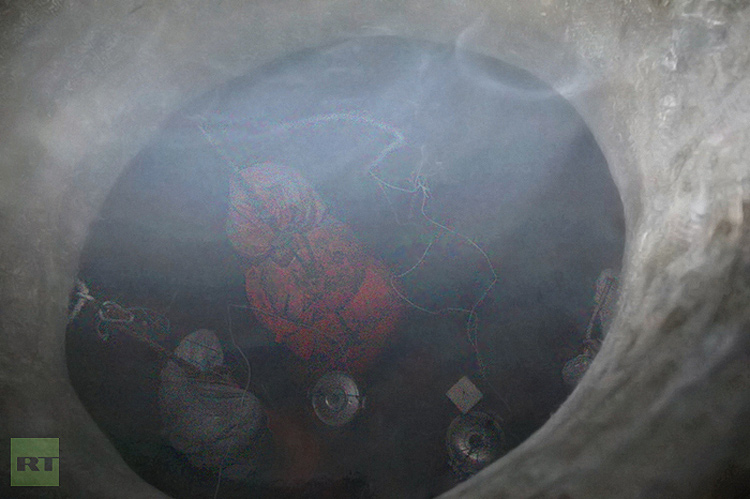 Frozen bodies are kept in orange sleeping bags, and heads or extracted brains are kept in metallic containers.

David Glasheen: A Real Life Robinson Crusoe
Girls of Octoberfest 2012
Drive Through
The “Lost” Steve Jobs Time Capsule
Edinburgh Fringe Festival 2014
President Obama Held His First Ever Twitter Town Hall
Zombie March
Auction of Pop Memorabilia
The International Lorraine Mondial Air Balloons Festival
One of the Most Beautiful Places in America
Southern California Enjoys Unseasonably Warm Temperatures
'Drool in the Pool' Day in Kansas
Taking a Bath is so Much More than Just Getting Clean
Shocktober Fest: People Attempt a World Record for the Most Zombies in One Place
David Blaine in "Electrified: One Million Volts Always On"
National Flipper Race, Running with Fins!
Londoners Enjoy The Warm Weather
Lifestyle, Surreal and Editorial Photography by Margeaux Walter
700th Anniversary of the Battle of Bannockburn
South Florida Fair 2012: The 100th Anniversary Edition
Life Inside One of the Largest Favela in Rio de Janeiro
Photographer Shows Some Lessons With These Before And After Photos
"Wilhelm Brasse’ Mugshots": Photographer Took Up To 50,000 Chilling Photos In Auschwitz For The Nazis During World War II
The Badass And Chilling Watercolor Paintings Of Misha Vyrtsev
chilling, eternal, recipe