Wildlife Photographer of the Year 2011 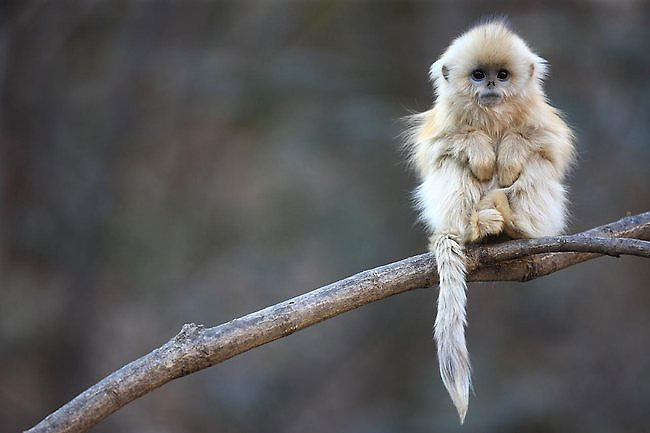 Folded up into a fur-ball, this youngster is warming its extremities in between bouts of play and feeding. He is part of a band of about 70 or so Qinling golden snub-nosed monkeys living high up in Chinas Qinling Mountains, surviving on lichen, leaves, bark and buds. If mother is not around to cuddle up to, then sitting like this is the best way to keep warm in the extreme winter cold, says Cyril. Sitting apart from its mother also makes such a little monkey vulnerable to attack by goshawks or golden eagles. The species is endangered, and this subspecies probably numbers no more than about 4000. The total population of all races of golden snub-nosed monkeys is only 8000-20,000. 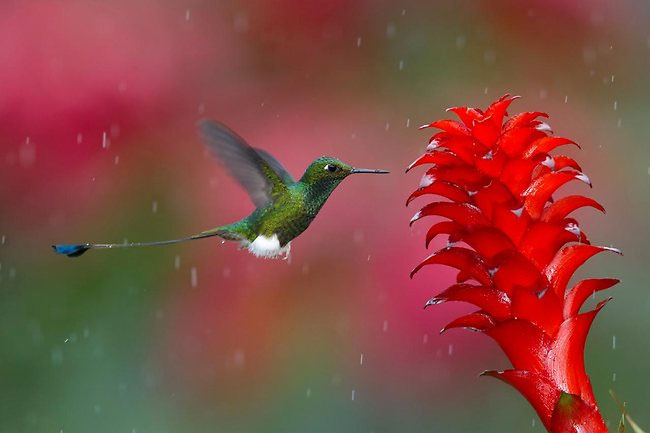 Petr has become addicted to hummingbirds. One of his favourite species is the booted racket-tail – tiny, quick and a real challenge to photograph. He recently spent more than two weeks at a lodge in Ecuador watching hummingbirds, obsessed with getting the quintessential image. Each day, he watched the birds feeding, getting to know their routines which bird feeders and flowers they visited and when. Muted light gave the best results, and this shot of a male booted racket-tail feeding at a bromeliad was taken in the late afternoon. Petr used flashes to highlight the birds dazzling plumage and a fast shutter speed to slow its rapid wing-beat. The soft rain added a sparkling touch to the scene. 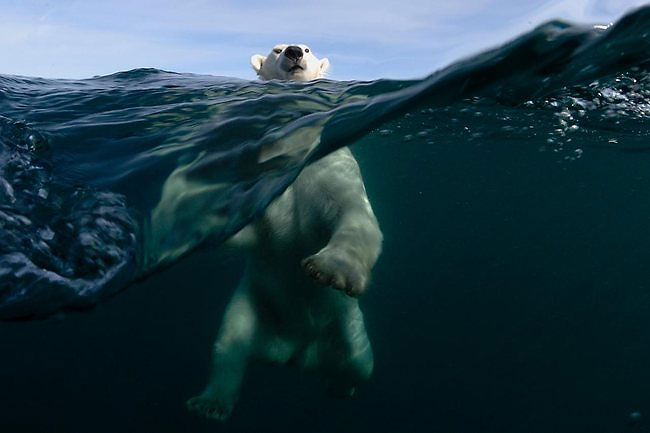 After three days on a small boat looking for polar bears in Repulse Bay, Nunavut, Canada, Joe finally got lucky. “We cruised at a distance, so we didn’t disturb the bear. Then, once we were sure it was relaxed with our presence, I slipped quietly into the water with just a mask and fins, attached to the boat by a rope. The polar bear now started to swim towards the boat, powering itself with its front legs, the toes of its huge paws spread wide.”

It didn’t appear to notice Joe, and for 20 minutes he was able to take photographs from the water. But then the bear caught sight of its own reflection in the dome port and swam up to Joe. Its amazing when a huge, powerful animal comes beside you. It came so close that its nose touched the housing, startling it. The second after Joseph took this shot, the bear reached out and touched the dome with its paw. Then it turned and swam away, leaving Joe with an unforgettable split-level image of a swimming polar bear – symbolic, he says, of the power and elegance of a wonderful creature struggling to survive in a fast-changing climate. 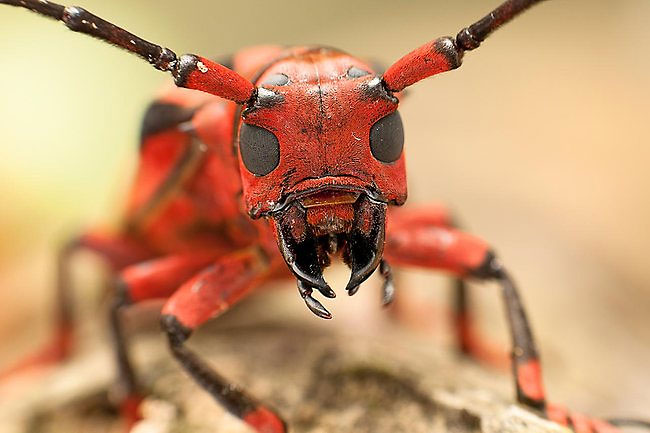 Hui Yu photographed this imposing portrait of a tropical flat-faced longhorn beetle on a family photography trip to a tropical rainforest at Gunung Jerai in Malaysia. A light bulb in a mosquito net attracted local invertebrates during the night, and in the morning there were lots of them to look at. Hui Yu is keen on macro-photography and chose the most colourful animal to take a portrait of. It had a strange look, like an alien, but it wasn’t angry. “It sat still on the branch all the time,” she says. “I want people to know that all creatures, even small ones, count.” 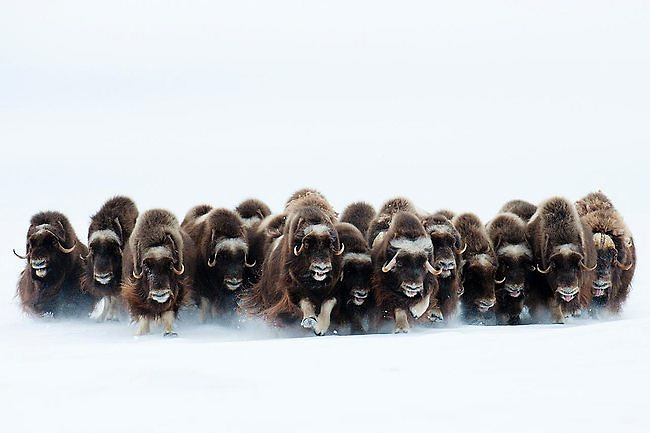 Eric had been tracking Arctic wolves on Victoria Island, Canada, when his guide spotted a herd of muskoxen some 5km away. Approaching, Eric could see that the herd was nervous, probably because wolves were also on its trail. So he made a detour and stopped about 1km away upwind. Suddenly, he realized that the herd was now running towards them, oblivious of them. “I’ve seen muskoxen run away,” says Eric. “I’ve seen them react to a threat by forming a circle, and I’ve even seen a male charge. But I’ve never seen a herd spread out into a charging line like this. I could hear the thundering of their hooves. It was one of those situations where it really mattered that I made the right choice between technical accuracy, aesthetics and security.” 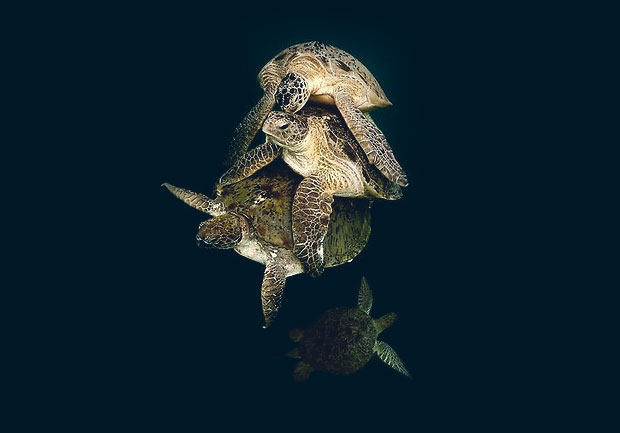 Sipadan Island, off the east coast of Sabah, Borneo, is renowned for its relatively pristine coral reefs and rich marine life. It’s also a hotspot for sea turtles, which gather there to mate and nest. And it was turtles that Marcel was after. As he returned to his boat at the end of the very last dive of his trip, after several days searching for a mating pair, Marcel noticed a green turtle floating nearby. “As I watched,” he says, “I realised it was being pushed out of the water by something underneath. This was the moment I’d been waiting for.” He grabbed his snorkel, mask and camera and plunged back in.

“I couldn’t believe my luck when I discovered it wasn’t just two but a stack of turtles mating.”

They didn’t appear bothered by Marcel’s presence, and while he was photographing the cooperative female and her suitors, other males drifted in to join the party. Female green turtles may have multiple matings and produce eggs sired by different males, but they can also be choosy about whose sperm they use and are capable of storing sperm in their oviducts for long periods. 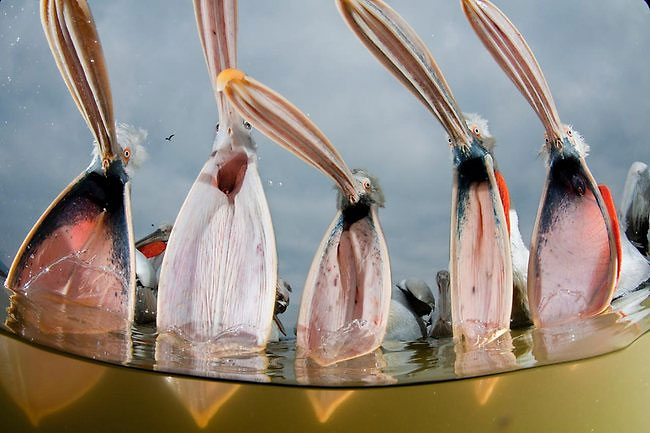 Usually only fish get to see the inside of a Dalmatian pelican’s beak at such an angle. But on Lake Kerkini in Greece, local fishermen feed the pelicans, which means part of the population is particularly bold and anticipates the meals of fish offal that are thrown to them. Bence planned his trip for February – when most of the pelicans are in their breeding plumage – which includes vibrant orange throat pouches. He constructed a special floating system that would enable him to take unusual perspectives using an underwater camera with a fish-eye lens, operated from a boat some 10 metres away. “As the pelicans lined up for fish scraps from the fishermen,” says Bence, “I couldn’t believe my luck when they lunged forwards in unison, mouths wide open.”

This Couple Has The Most Unusual Horrifying Engagement Photoshoot Ever
The Best Animal Images Of The Decade From The British Wildlife Photography Awards
This Is How A Person’s Appearance Can Change In Just One Day
Beautiful And Never Seen Vintage Soviet 'Antonov' Plane Ads
Viktoria Manas - Victoria’s Secret Plus Size Model
An Instagram Account Dedicated To Japanese Walls
Marvelous Beauty Portrait Photography By Eric Hückstädt
Before And After: Lithuanian Photographer Showed How Motherhood Changes Women
Stunning Real Photo Postcards Captured Street Scenes at Night in the 1960s
The Artistic Selfies Of Ivanka Danisova, Slovakian Lady Born With Half Face
A Photographer Takes Photos Of Toys That Are So Epic, They Can Outshine Any Blockbuster Movie Shot
Stunning Early Deadliest Tornado Photographs From The 19th Century
Golden Christmas Tree
Spectacular Winning Photos From The Travel Photographer Of The Year Awards
Half-Underwater Photos Show The Aquatic Life Hiding Beneath The Water’s Surface
Cameron Diaz: First Look for Esquire UK, November 2012
Photographer Peter Thorne Captures Adorable Photos Of Toronto’s Chubby Cats
Beautiful Portraits of Highland Park High School Teenage Girls, 1947
DEKOCHARI: The Youth of Japan Customise Their Pushbikes in Extreme Ways
Photographer Omar Robles Captures Ballet Dancers On The Streets Of Puerto Rico
Beautiful Portraits of Vietnamese Girls From the Youth of the Republic, 1961
Photographer Mayan Toledano Captures Daily Routines Of Female Israeli Soldiers
Beautiful Nordic Nature Through The Lens Of Photographer Roger Brendhagen
A 58-Year-Old Lady Creates Magical Costumes That Can Transport You to Another World
photographer, wildlife