Living On a Dollar a Day

“One in six people in the world live at or below the poverty threshold of one dollar a day. At a time of great social and economic disruption in the world, people on the brink of survival can be easily pushed over the edge, or just as easily pulled back to safety. The people who generously shared their stories in Living On A Dollar A Day inspire us to change lives for the better. “Living On A Dollar A Day”, (Text by Thomas A. Nazario, Photographs by Renée C. Byer and Foreword by the 14th Dalai Lama), is a passionate call to action, presenting 348 pages filled with over 200 color photographs, profiles, explanatory charts and graphics that deliver an unprecedented and thought-provoking examination of global poverty, and how it impacts the poor and the rest of the world community”. – The Quantuck Lane Press 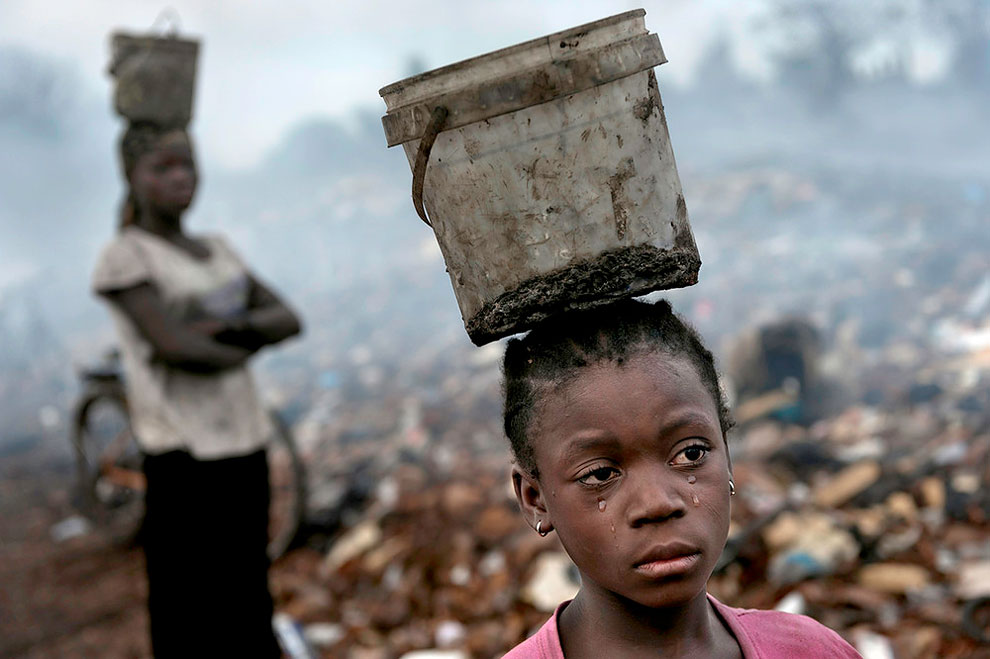 In an e-waste dump that kills nearly everything that it touches, Fati, 8, works with other children searching through hazardous waste in hopes of finding whatever she can to exchange for pennies in order to survive. While balancing a bucket on her head with the little metal she has found, tears stream down her face as the result of the pain that comes with the malaria she contracted some years ago. This is work she must do to survive. (Photo by Renée C. Byer/Living on a Dollar a Day) 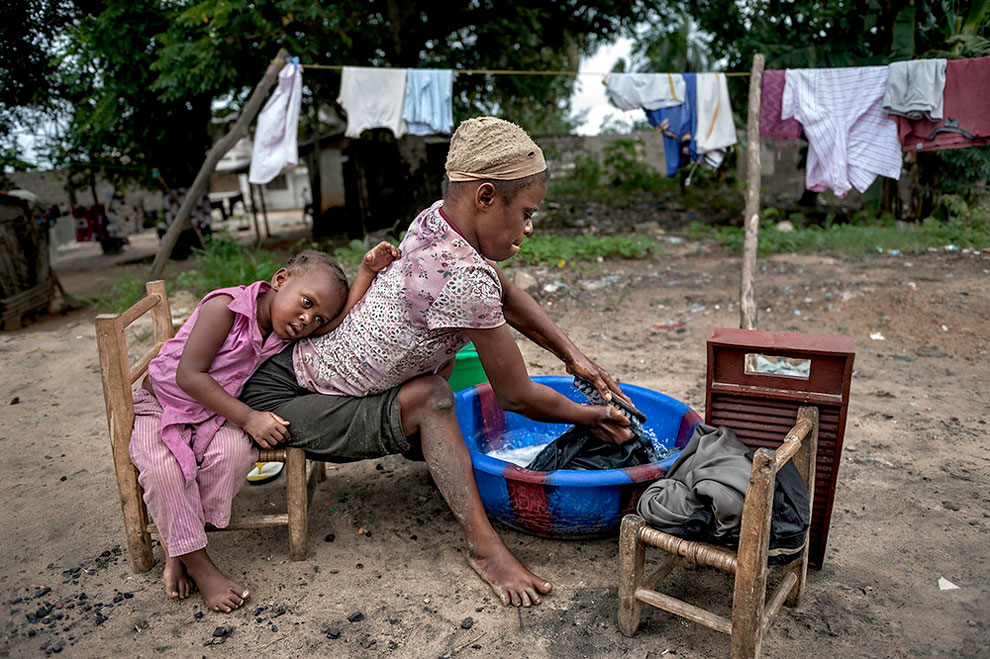 Jestina Koko, 25, with her daughter Satta Quaye, 5. Crippled since the age of three, she depends on her arms to lift and drag herself. She survives by doing laundry for others, selling cookies on the street, and begging in Monrovia, Liberia. Both of them suffer from malaria. She wishes for a wheel chair, a private room to live in and for her daughter to go to school. They sleep in the hallway of a home that has no electric, toilet or running water and own nothing. August 29, 2010. (Photo by Renée C. Byer/Living on a Dollar a Day) 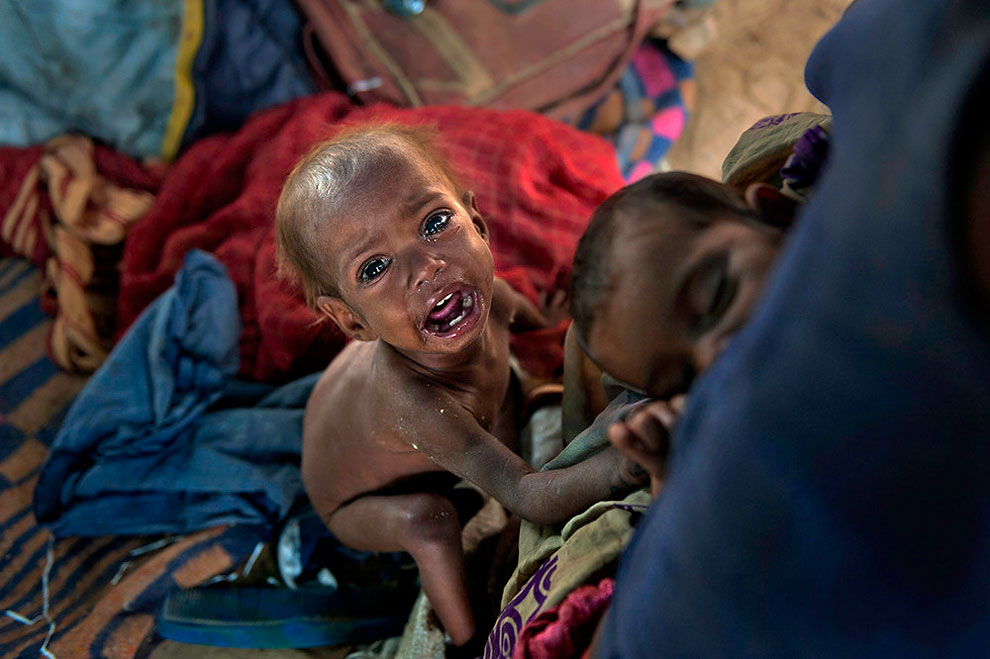 In the Charan slum settlement of northern India, Kalpana, 20, starves one of her children Sangeeta, 2, while her sister Sarita, 5-months-old, right, sleeps in comfort, above right, in her mother’s arms. Sangeeta only weighs 9 pounds. Children are more likely to appeal to the sympathy of those inclined to give to beggars, so those who beg use children for this purpose. Worse, sometimes as in this case a child is staved and carried about by the child’s parent while she begs on the streets or rented out to another beggar to be used as an object of sympathy in the hope of generating more income over the course of a given day. Sometimes these “extra funds” are used to feed other children, thus, in practice, one child is sacrificed for he sake of others. Sangeeta has since been helped by the Tong-Len Charitable Trust’s mobile medical clinic at the Charan slum settlement, Dharamsala, India. But according to the World Bank 19,000 children die a day from preventable causes. (Photo by Renée C. Byer/Living on a Dollar a Day) 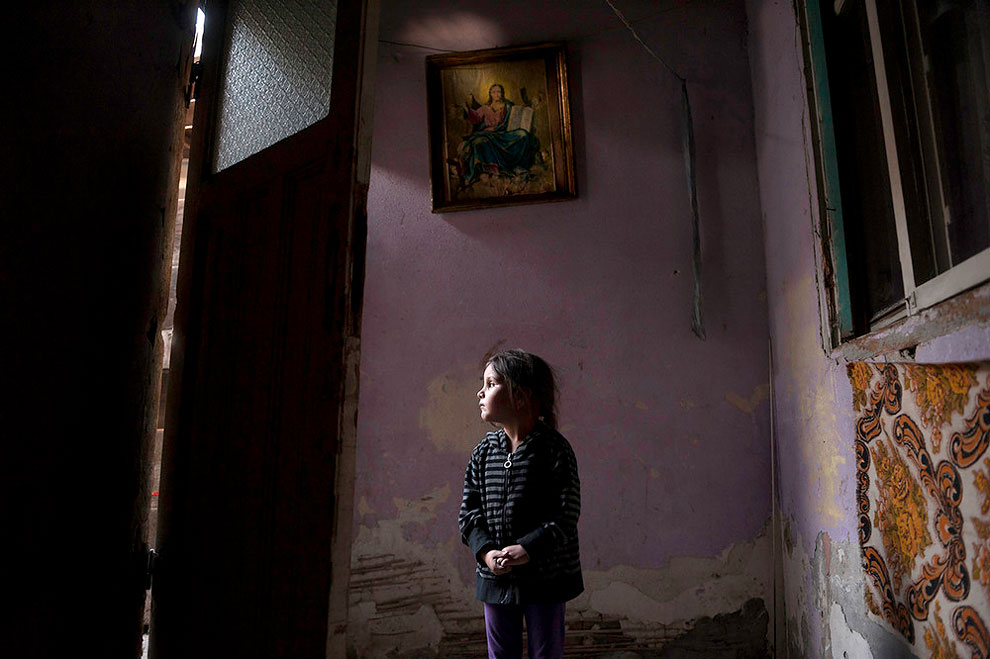 Four-year-old Ana-Maria Tudor, above, stands in the light of her doorway in Bucharest, Romania, hoping for a miracle as her family faces eviction from the only home they have ever had. Her father recently had a gall bladder surgery that resulted in an infection and left him unable to work. The one room they live in has no bathroom or running water. (Photo by Renée C. Byer/Living on a Dollar a Day) 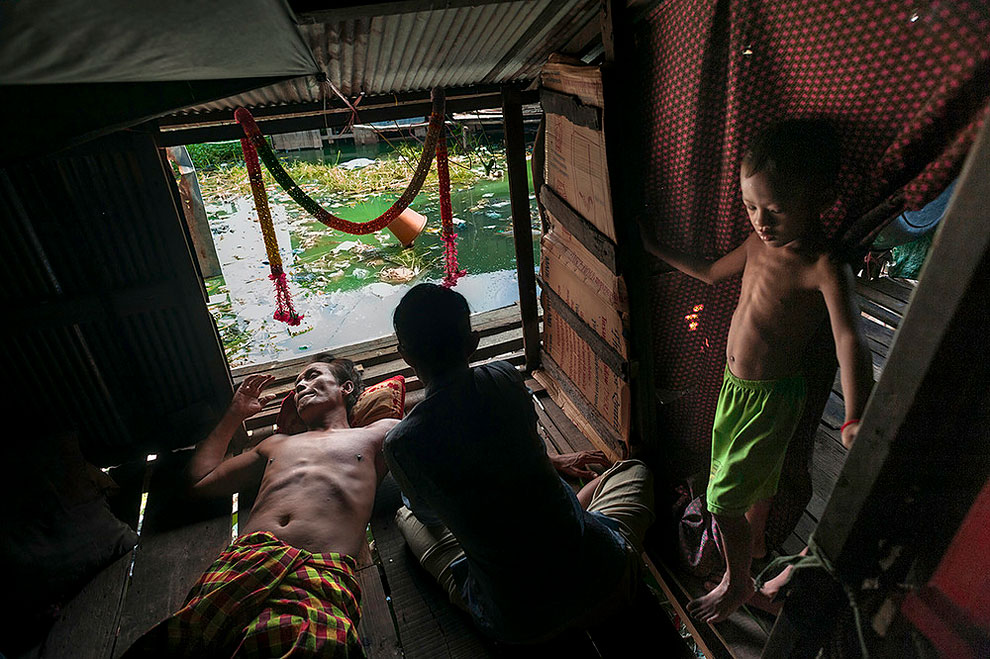 Phay Phanna, 60, lost his leg when he stepped on a land mine in 1988 near the Cambodian-Thai border. He is a widower and is the sole head of his family, caring for 11 children in a home he does not own. It has been scheduled for demolition since being purchased by a private developer in 2008 in Phnom Penh, Cambodia. (Photo by Renée C. Byer) 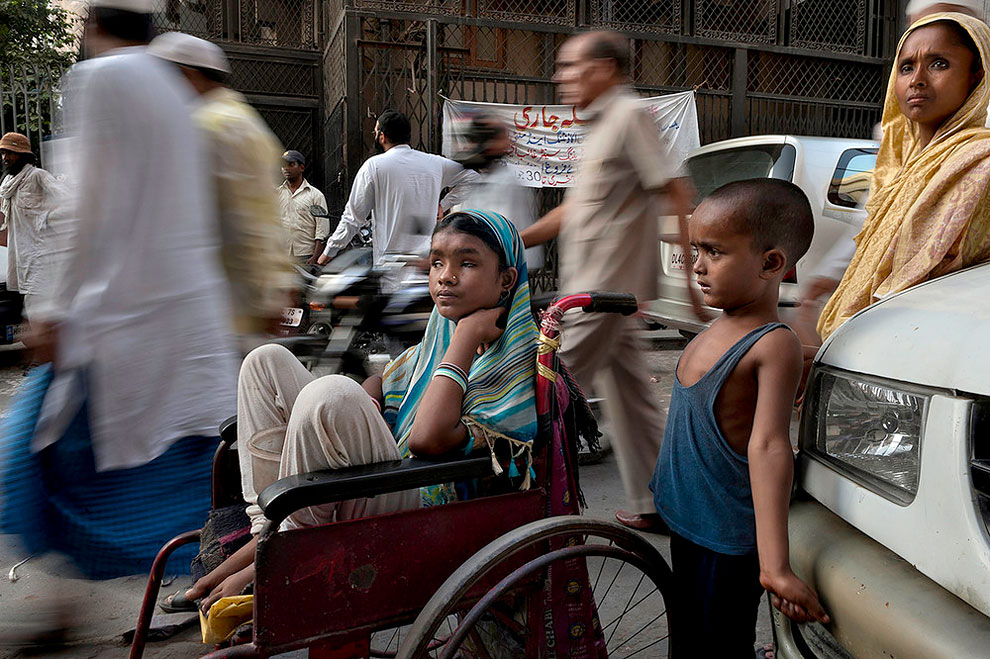 A sea of people passes by Hunupa Begum, 13, who has been blind for the past 10 years and lives close to the Nizamudin Bangala Masjid (Mosque) in New Delhi, India. She begs as the only source of income for her family that consist of a brother Hajimudin Sheikh, 6, center, who suffers fluids that accumulate in his head and her mother Manora Begum, 35, right, who suffers from Asthma, and she has a womb ailment and can’t do manual labor. Their father Nizam Ali Sheikh died ten years ago of Tuberculosis. Her wheelchair was donated by a passerby. (Photo by Renée C. Byer/Living on a Dollar a Day) 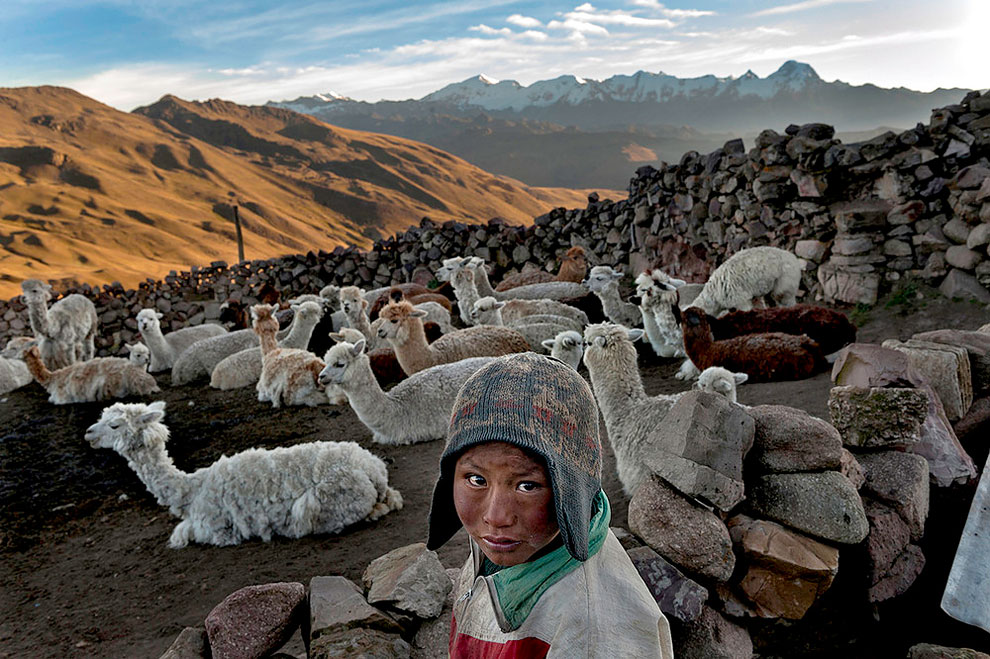 Following the death of his father, Alvaro Kalancha Quispe, 9, helps his family survive by herding. He opens the gate to the stone pen that holds the family’s alpacas and llamas each morning so they can graze throughout the hillsides during the day. He then heads off to school, but must round them up again in the evening in the Akamani mountain range of Bolivia in an area called Caluyo, about an hour from the city of Qutapampa. In this part of the world, the highlands of Bolivia, approximately 13,000 feet above sea level, residents live in homes with no insulation, no electricity, and no beds. Their water comes from streams that run off the snow-covered mountains. Their livelihood lies with their animals, for each animal produces about three pounds of fur each year, and each pound of fur is sold for 18 bolivianos, which amounts to about $2.50 U.S. All in all, this family may earn about $200 of income each year from the herd they watch over. (Photo by Renée C. Byer/Living on a Dollar a Day) 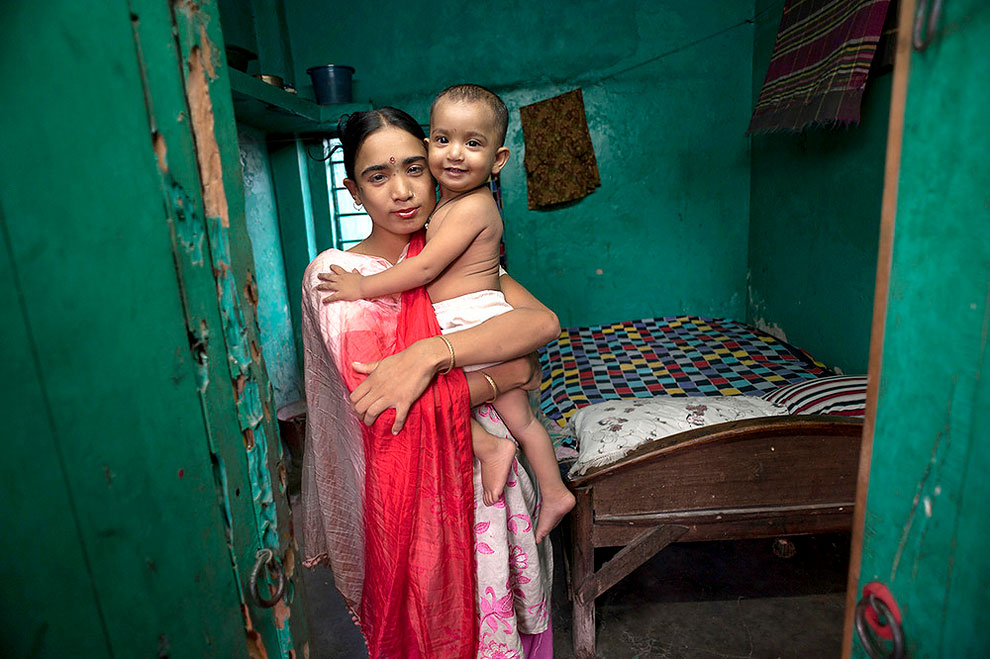 Labone, 27, takes a moment to hold her young daughter Nupur, 1, who was fathered by a client, before she has to return to her evening’s work in a brothel in Jessore, Bangladesh. (Photo by Renée C. Byer/Living on a Dollar a Day) 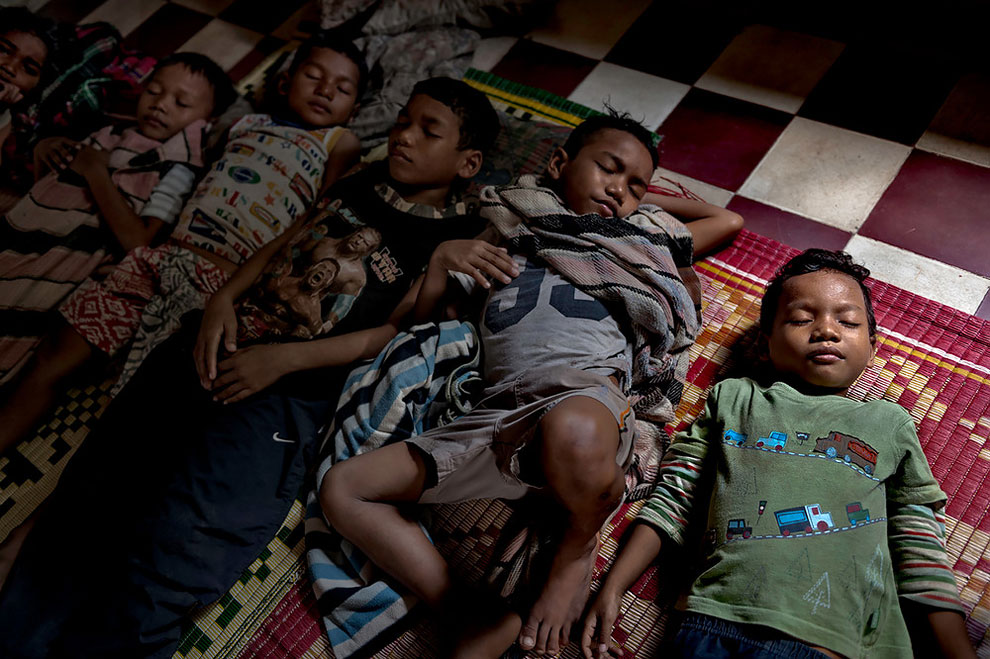 Five brothers, ranging in age from 5 to 12, sleep together on the floor at At the Krousa Thmey Center, a temporary orphanage. The shelter serves as a safe house for children who have been abandoned and found wandering the streets. Space is limited, so the children cannot stay for long, but they are offered temporary refuge from the influences of the city streets. Phnom Penh, Cambodia. (Photo by Renée C. Byer/Living on a Dollar a Day) 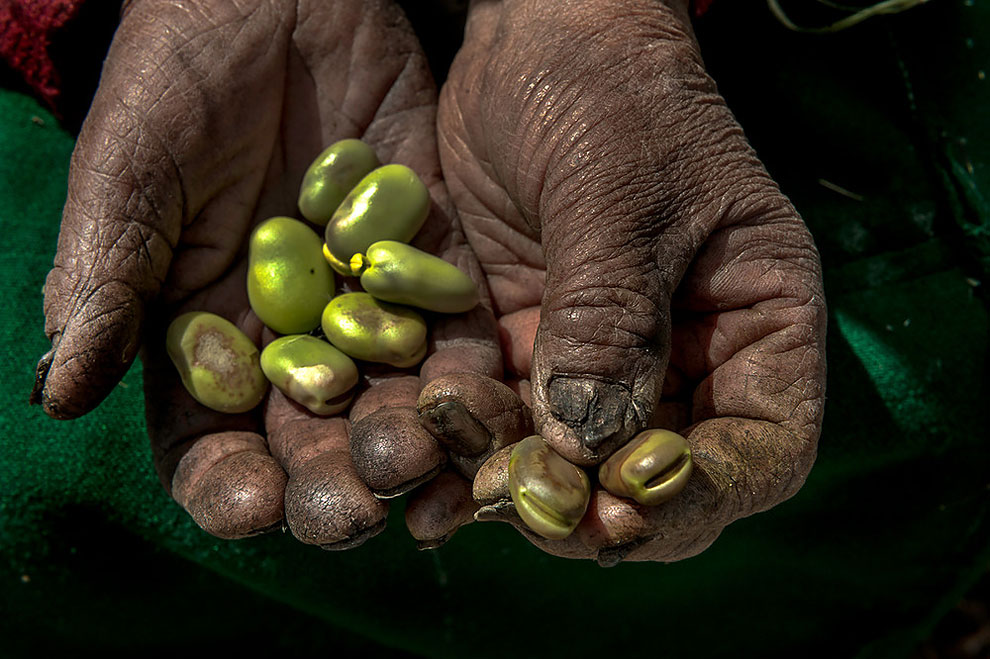 The hard-worked hands of Jacaba Coaquira, 80, holding the green beans she grew on her land. This year the production of her land was affected by lack of rain and early cold weather that froze the crops before they finished growing. Santiago de Okola, Bolivia. (Photo by Renée C. Byer/Living on a Dollar a Day) 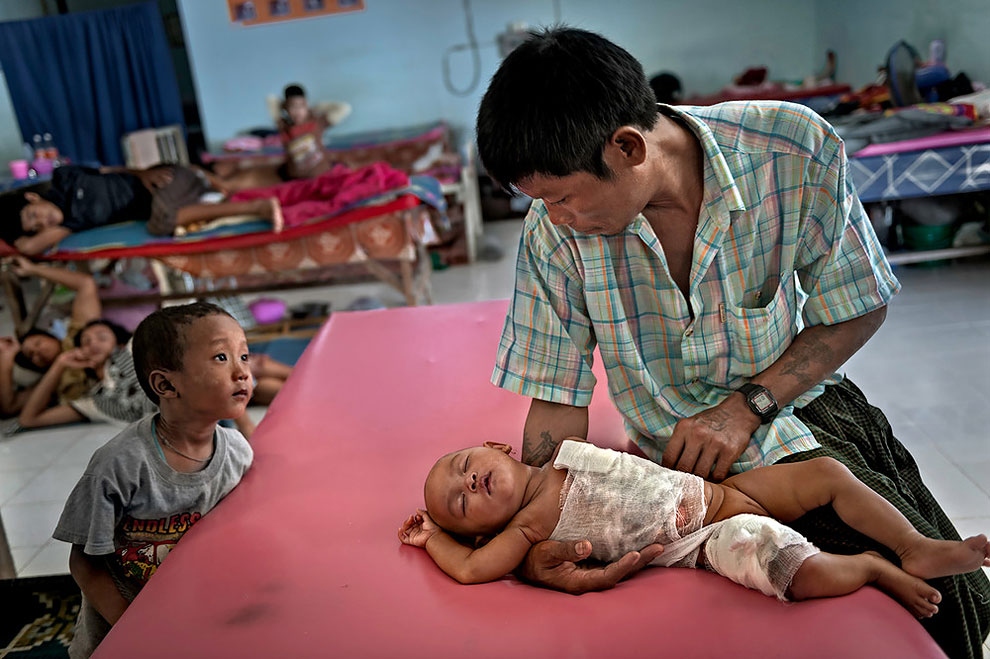 At the Mae Tao Clinic this 5-month old child receives free medical care for her burns. The child pulled a pot of hot water on herself as she was being watched by her 11-year old sister while her parents farmed. Here, her father, Zaw Win, and another child anxiously hope for her recovery. Mae Sot, Thailand. (Photo by Renée C. Byer/Living on a Dollar a Day) 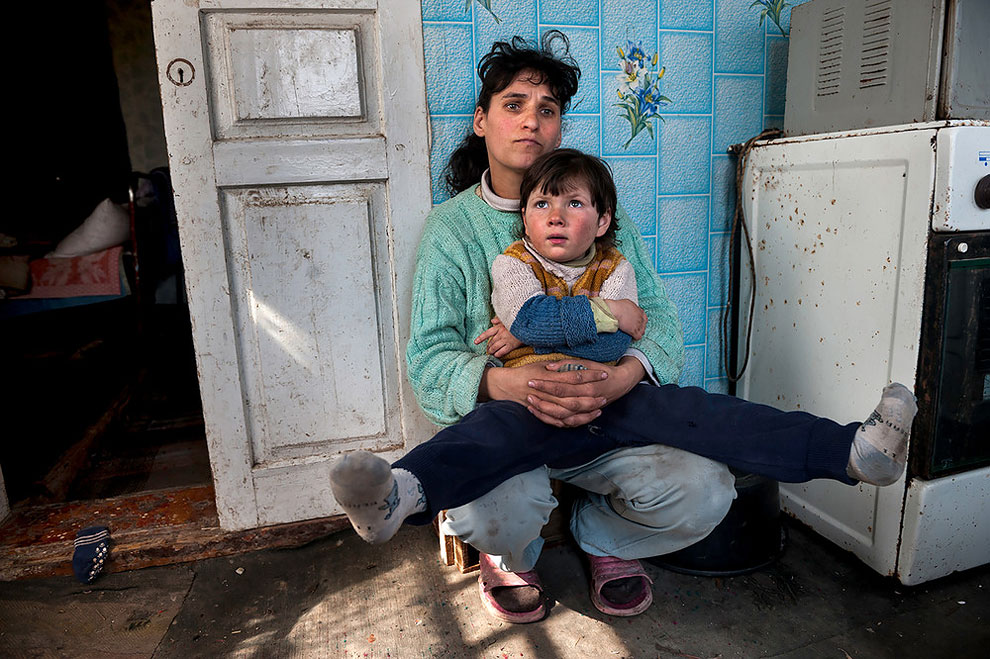 Lidia Potcovirova can’t afford to send her daughter, Anastasia, 4, to school so she often accompanies her mother to work in the fields. Fintinita, Moldova. (Photo by Renée C. Byer/Living on a Dollar a Day) 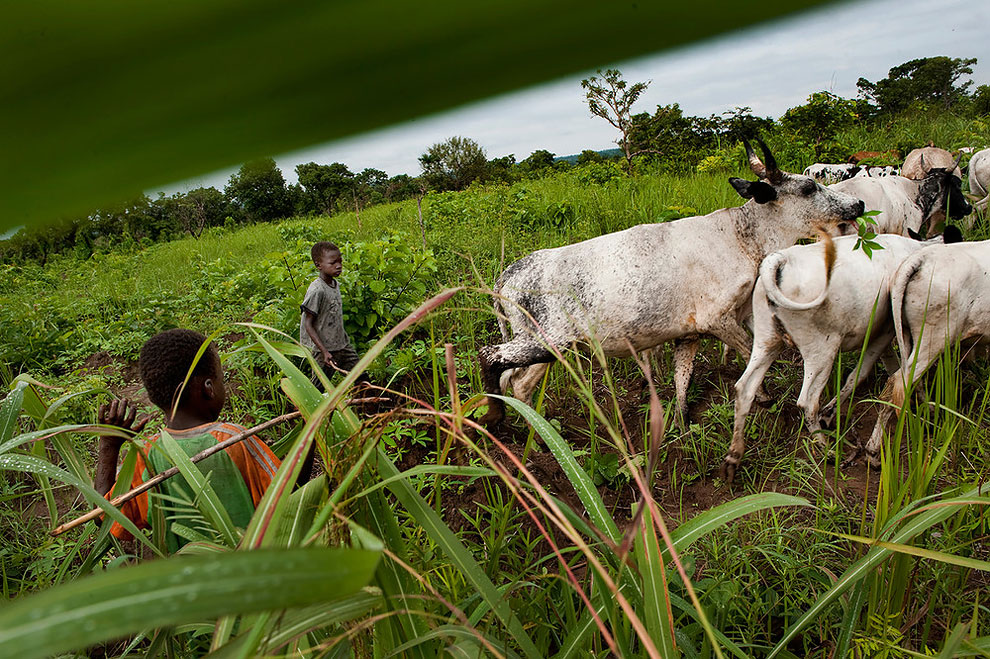 Two small boys are dwarfed in the African bush as they try to herd cattle. They herd the cows from sunrise to sunset with no hope of ever attending school. The village of Dawa in the Volta Region of northern Ghana. (Photo by Renée C. Byer/Living on a Dollar a Day) 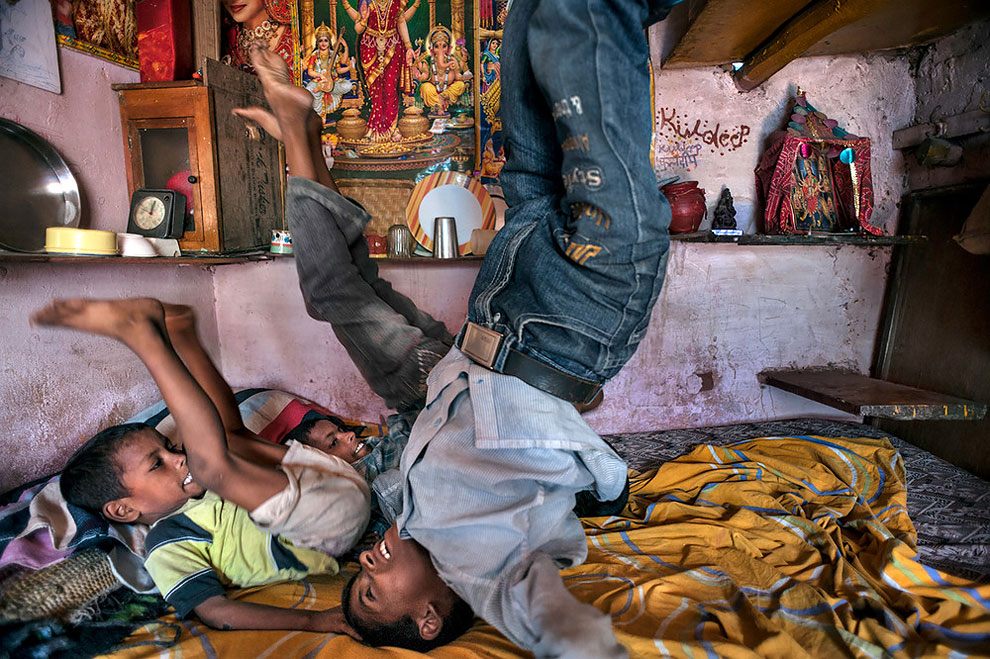 Three boys play on the bed their entire family shares. From the left are Ajit Kumar, 5, Dilip Kumar, 9, and Kuldeep Kumar, 10. The bed occupies their entire living space. Their home is located on a garbage dump. Kusum Pahari slum, South Delhi, India. (Photo by Renée C. Byer/Living on a Dollar a Day)