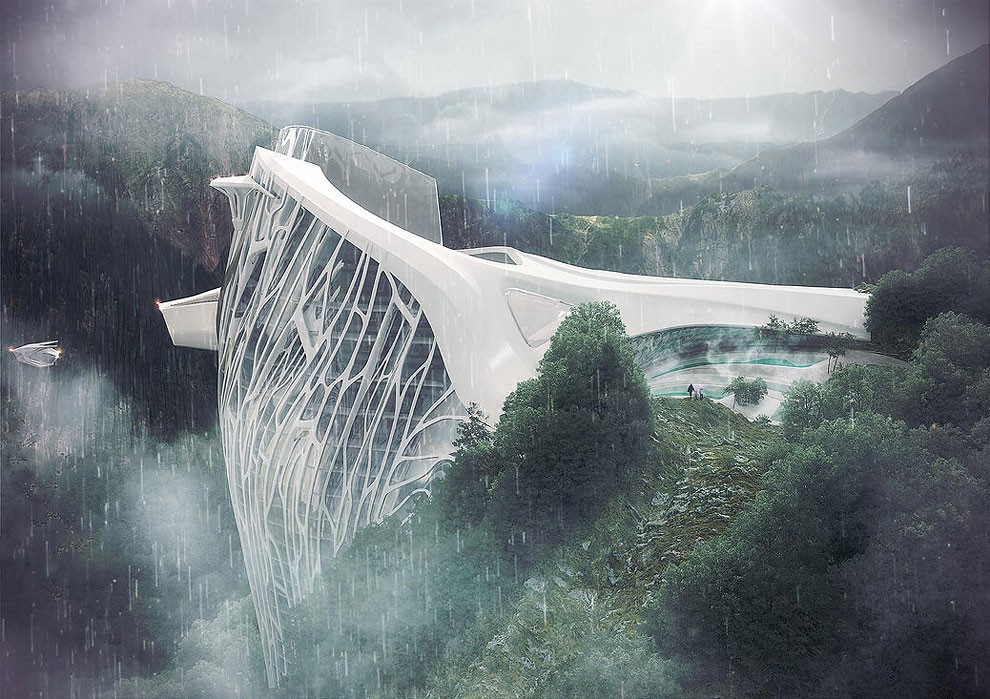 According to Armin Senoner, Italian architect: “My Diploma is a semiological project applied on the program of a hotel as such reflects very significant difference in terms of comfort demand within the same class. The subclassification into three classes, namely economy, business and superior is a consequence of the social establishment and wealth distribution.” 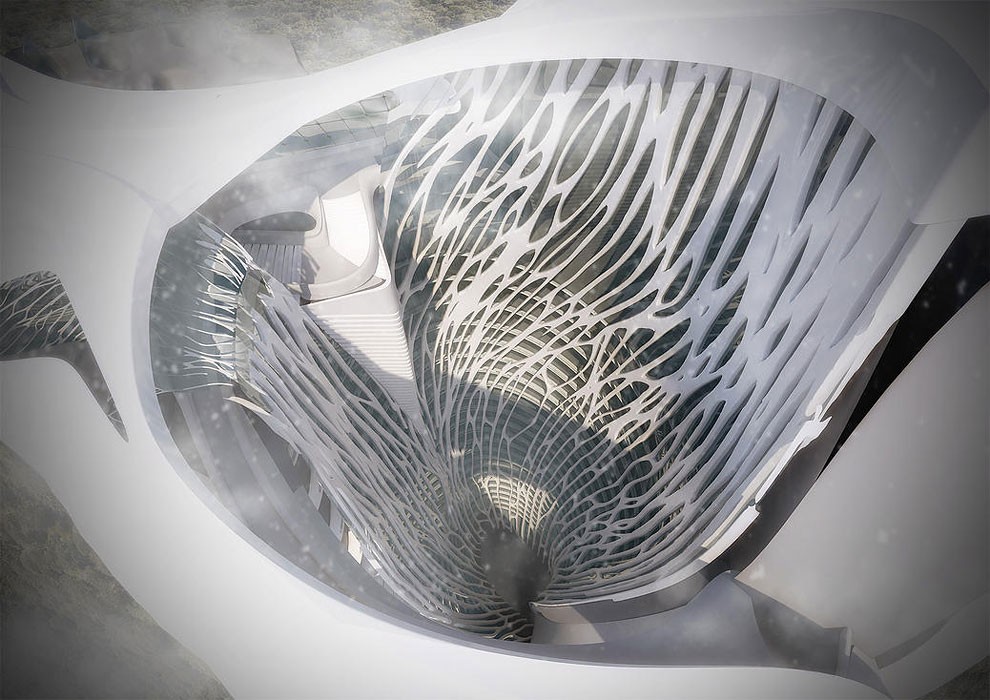 “A hotel can be considered being a reflection of society, where a slice of such can be addressed to a particular luxury class, in the hotel sector expressed with a star- rating system. Contrast within society in terms of wealth distribution becomes better visible in the upper class, namely the last 5%, which addressed to the hotel sector means six to seven stars.” 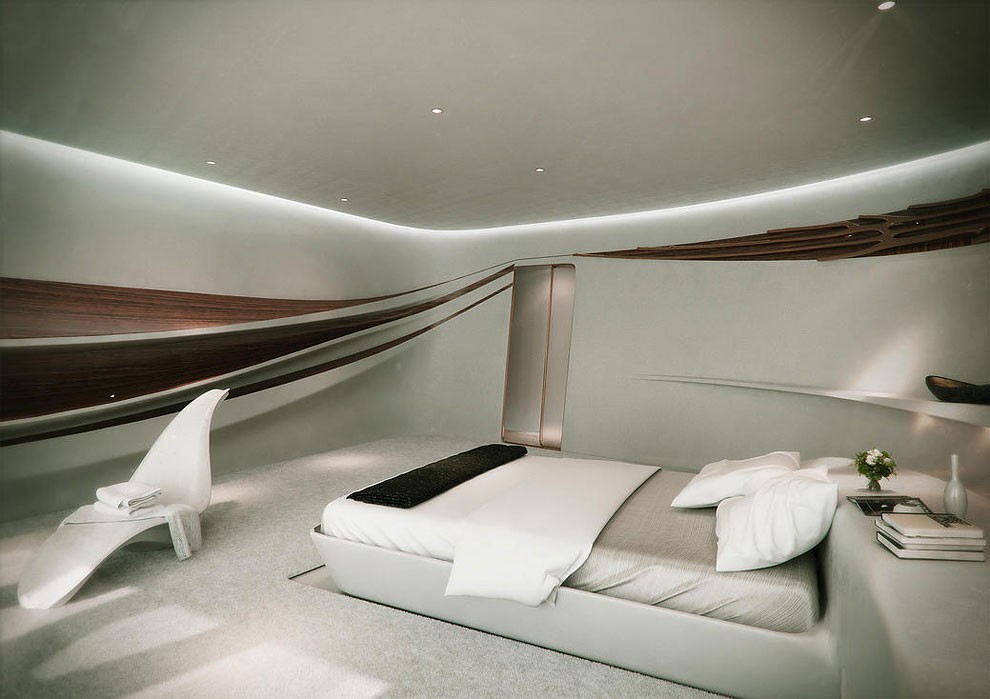 “The project is a critical reflection of the question about through which parameters luxury or comfort can be achieved and then gradually been differentiated according to class.” 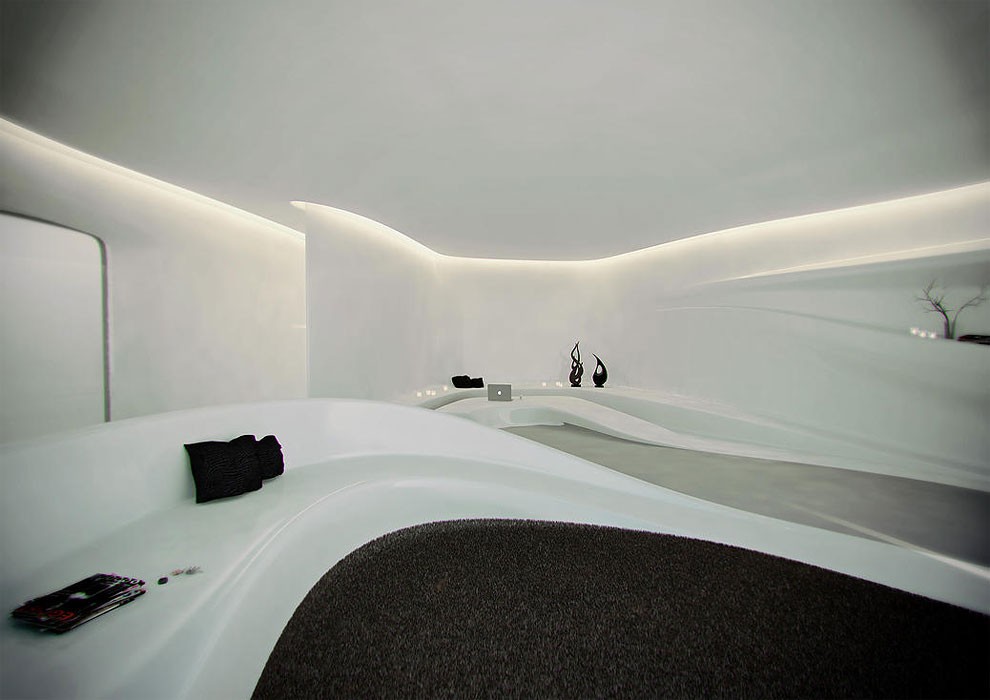 “Such parameters affect primarily the privacy degree of the space, but other physical parameters such as materiality as well as topographical and environmental conditions are taken into account.” 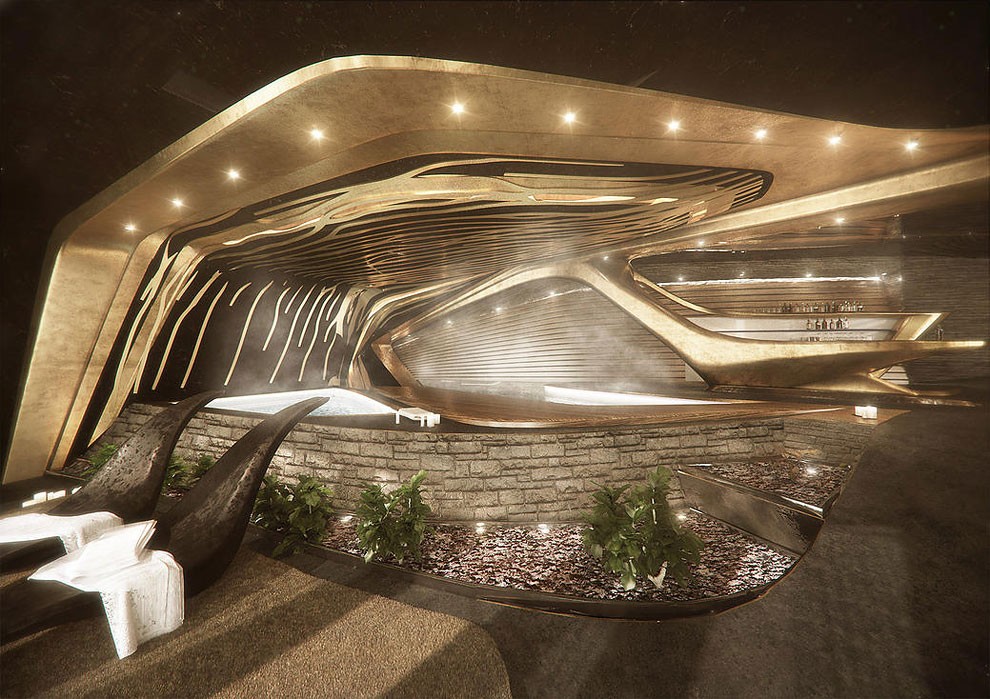 “Furthermore psycological effects such as height, orientation towards most privileged views are key for the arrangement of the three classes.” 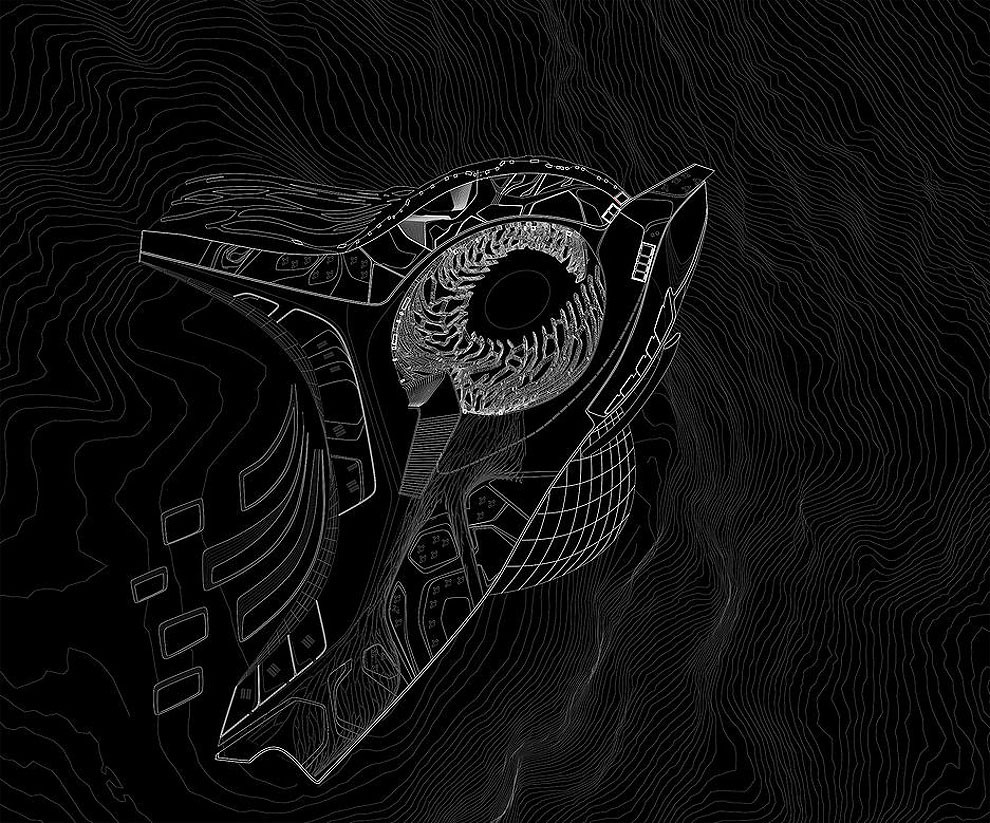 “The wide amount of program composed of retail shopping, the restaurants, theater and the services,
will erect at 2000m height in the Dolomites having a ropeway station as primer access point.” 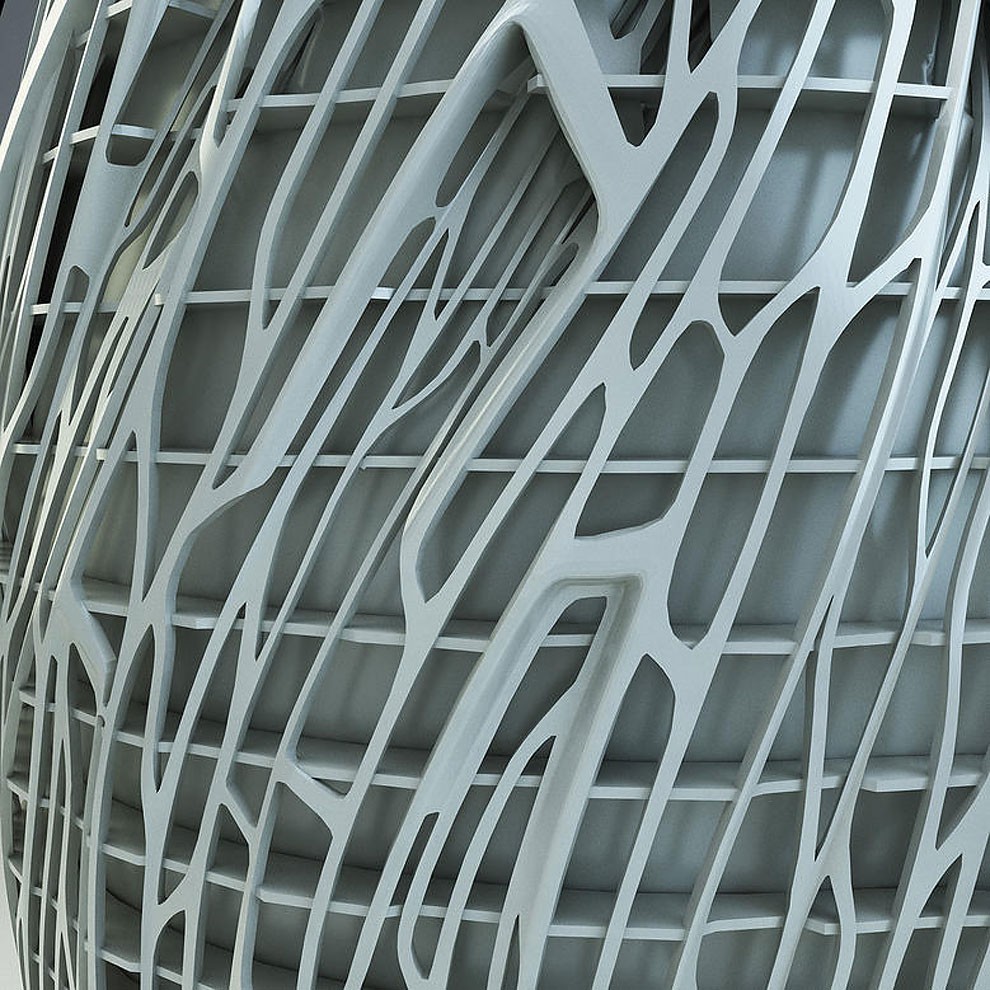 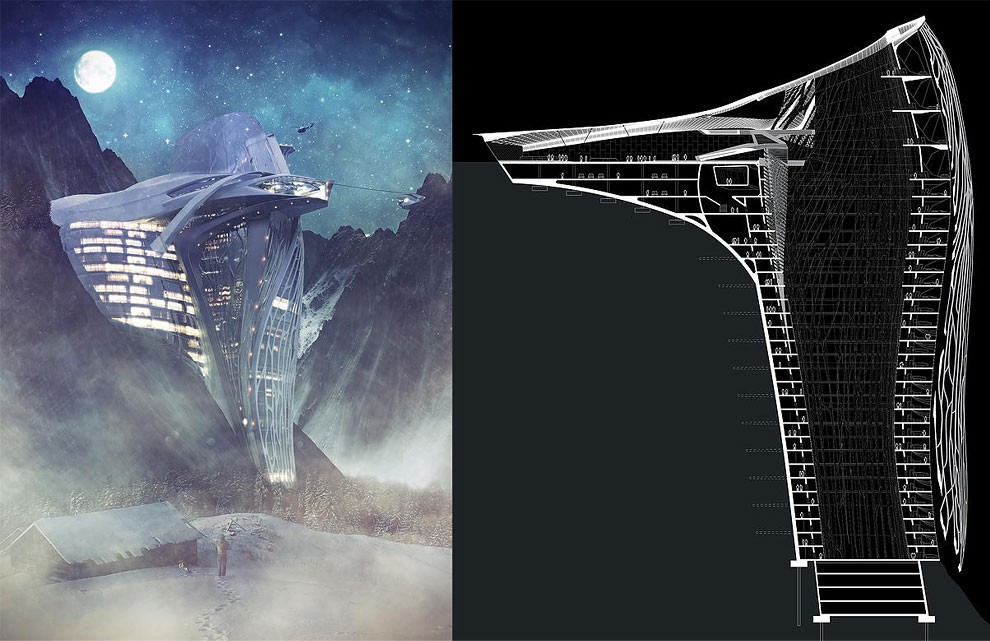 “The topography is main driver for both orientation and program distribution using both horizontal- and verticality as possibility for the luxury resort.”

Breathtaking Stained-Glass Cabin Looks Ripped From A Fairytale
An Artist Has Created A Brilliantly Detailed Manhattan Desk That Glow In The Dark
"Heaven's Hell": The Book Of Afterlife Adventures By Anthony Jones
Concept Ice Vehicle by Lotus
Through The Looking Glass: Designer Created Futuristic Silk Scarves Inspired By The Expressive Refraction Of Shape And Colours
The Superb Architectural Concepts by Łukasz Brzozowski
Libyan Leader's Life of Luxury Overrun by Rebels
An Architect Who Illustrates The Secret Life Of Giants In The Streets Of Turkish Cities
Bioclimatic Architecture
Stunning Photographs Of The Old Cincinnati Library Before Being Demolished, 1874-1955
Retro And Futuristic Illustrations By James Gilleard
A Photographer Has Created A Series Of Paw-Traits Of Hungry Dogs Pulling Hilarious Faces As They Try And Catch Treats
A 1960 Era Atlas E Missile Site that Has Been Converted Into a Self-Sufficient Home
Ancient Wooden Churches Of Karelia Land
Surreal Sliding House Created By Artist Alex Chinneck
Facebook's New Headquarters in Menlo Park, CA
"Stage Of Forest": Futuristic Ski Resort Lookout By Meta-Project
People Went Crazy Taking Selfies In This Mirrored Beach Hut
Incredible Concept Art Of Our Favorite Pop Culture Characters And More By Michael Kutsche
15 Finalists Of The Art Of Building Architectural Photography 2016
'Vertical Forest' in Chinese Residential Complex Becomes Mosquito-Infested Jungle
This Unique New Bookstore In China Is Filled With Optical Illusions
An Artist Has Created A Giant Mosaic Made From Recycled Plastic Bottles Depicting Vincent Van Gogh’s Famous Painting 'The Starry Night'
Homes of the Future: Exploring the Future of Modern Homes
alpine, architect, concept, created, futuristic, hotel