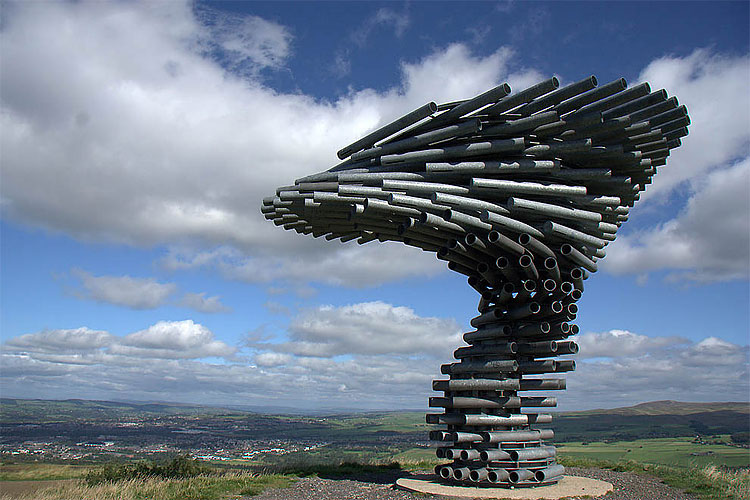 The Singing Ringing Tree is a wind powered sound sculpture resembling a tree set in the landscape of the Pennine mountain range overlooking Burnley, in Lancashire. 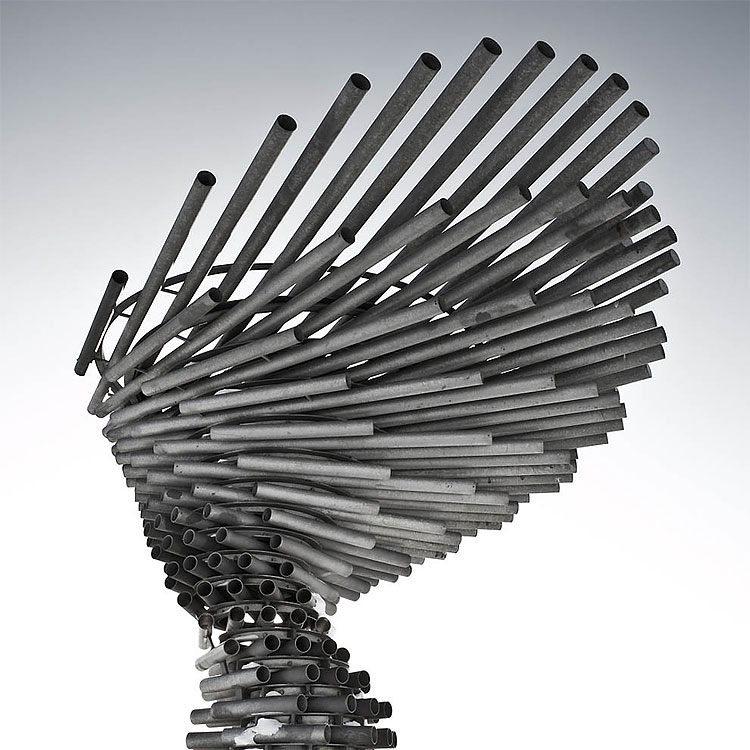 Completed in 2006, it is part of the series of four sculptures within the Panopticons arts and regeneration project created by the East Lancashire Environmental Arts Network (ELEAN). The project was set up to erect a series of 21st-century landmarks, or Panopticons (structures providing a comprehensive view), across East Lancashire as symbols of the renaissance of the area. 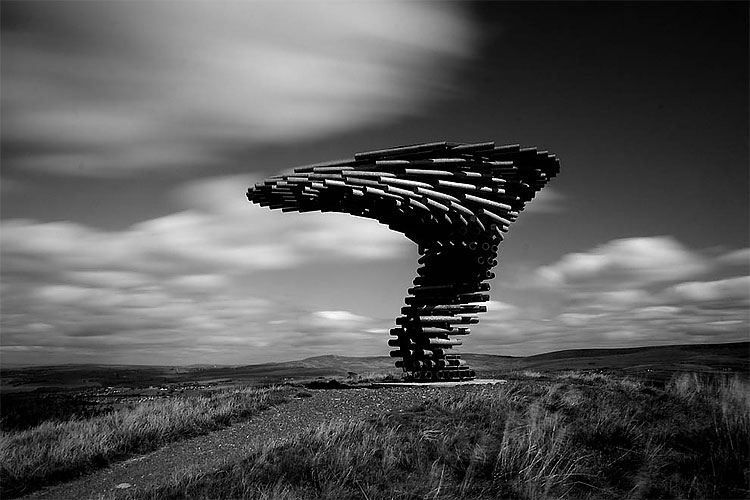 Designed by architects Mike Tonkin and Anna Liu of Tonkin Liu, the Singing Ringing Tree is a 3 metre tall construction comprising pipes of galvanised steel which harness the energy of the wind to produce a slightly discordant and penetrating choral sound covering a range of several octaves. Some of the pipes are primarily structural and aesthetic elements, while others have been cut across their width enabling the sound. The harmonic and singing qualities of the tree were produced by tuning the pipes according to their length by adding holes to the underside of each. 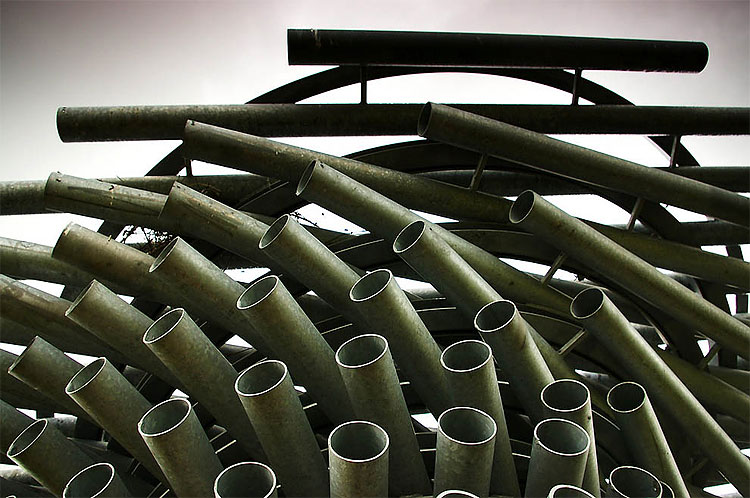 In 2007, the sculpture won (along with 13 other candidates) the National Award of the Royal Institute of British Architects (RIBA) for architectural excellence.

'World's Worst' Waxworks Collection Sold
The Ironic Loss Of The Postmodern BEST Store Facades
What is the WEEE Man and What does He Represent?
Bizarre Modern Russian Housing Complexes Examplified By Samara City
The "Rain Room" in MoMA
People On This Group Are Sharing Examples Of ‘Urban Hell’ That Look Like A Dystopian Movie But Are Sadly Real
Brad Pitt Has Built Over 100 Homes For Families Who Had Lost Everything During The Hurricane
Rather Than Cut It Down, Family Builds House Around 150-Year-Old Tree
'Blu Tack' Sculpture by Elizabeth Thompson
Legendary London’s Thinnest House is for Sale
This Artist Spent 10 Years Carving A Giant Cave – Alone With His Dog
Vintage Restored 1927 Bowling Alley In Los Angeles
The Dragon Maker
An Environmental Island Floating on the Equatorial Pacific
Majestic Sails Benches Will Transport You To The Open Sea
Great Masters Having Great Times: Miniature Art Of Lorenzo Castellini
Joel Weber's Tiny House Will Help Him Save At University of Texas In Austin
A Beautiful Abandoned Casino In Constanta, Romania
An Amazingly Sculptural Spiral Staircase Has Been Installed In The Lobby Of This Office Building
Amazing Then-and-Now Photos Show How London Has Changed From Between the 1920s and 2010s
Is It A Billboard? No, It's A Building!
Google Art Project
47-foot M&M Piñata Lifted in NY
Summer House Designed With A Pool On Its Roof Can Be As Open Or As Closed As The Homeowner Desires
ringing, singing

Let There Be Light
This Artist Spent 10 Years Carving A Giant Cave – Alone With His Dog
Why Is This Little House In The Middle Of The Street In New York?
New Vancouver’s Towers Looking Like Jenga
Mirrored Ceiling Makes Bookstore Look Like an Infinite Library
Accidents Waiting To Happen Thanks To These Architects And Designers
Amazing Views From These Wave-Shaped Apartment Buildings In Denmark
Handbags and Sliced Bread: Hans-Peter Feldmann at the Serpentine gallery
Vintage Restored 1927 Bowling Alley In Los Angeles
Giant Globe Made From Matches By Andy Yoder
2007 ‒ 2022 by Design You Trust. Proudly hosted by WebHostingBuzz.
Privacy Policy · Terms of Service · Content Removal Policy ❤️ 🇺🇦