The Veolia Environnement Wildlife Photographer of the Year Competition 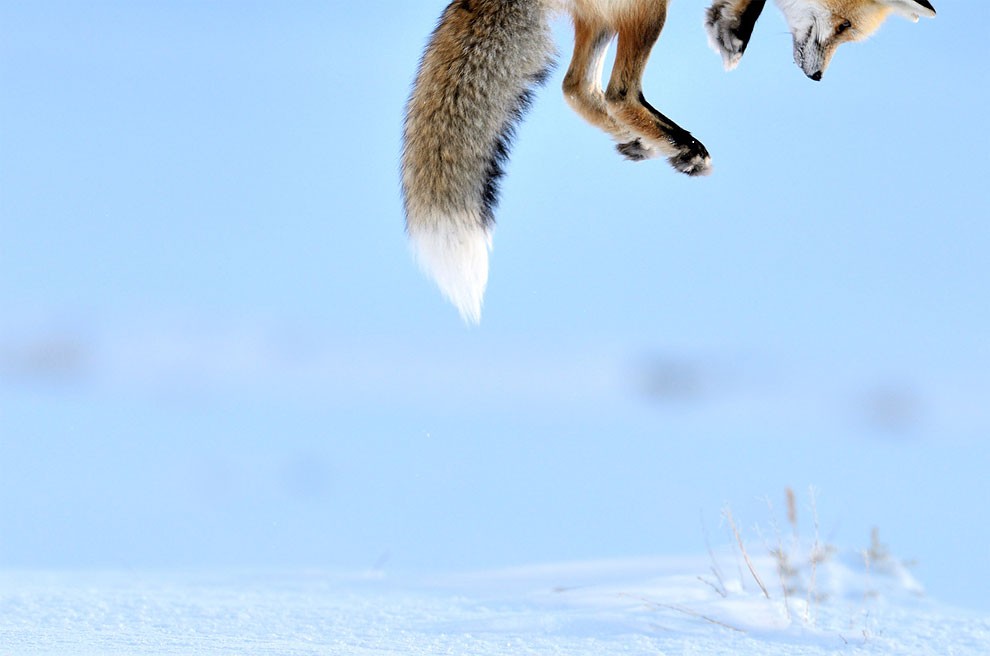 Commended. Photographer Richard Peters sat in his car and from a distance watched the fox hunting, just enjoying the performance. He was in Yellowstone National Park, in Wyoming, and there was snow on the ground. The fox was listening for rodents under the snow, then leaping high to pounce down on the unsuspecting prey. It was too far away to photograph, and so when it disappeared and suddenly reappeared, on a snow bank level with the car window, Richard was taken by surprise. “It was already in pounce position, and I barely had time to lift the camera before it leapt up into the air almost clean out of my field of view. I managed to get a sequence of the leap, but I love this quirky image best, which gives a real sense of just how high these wonderful animals can jump”. (Photo by Richard Peters/Veolia Environnement Wildlife Photographer) 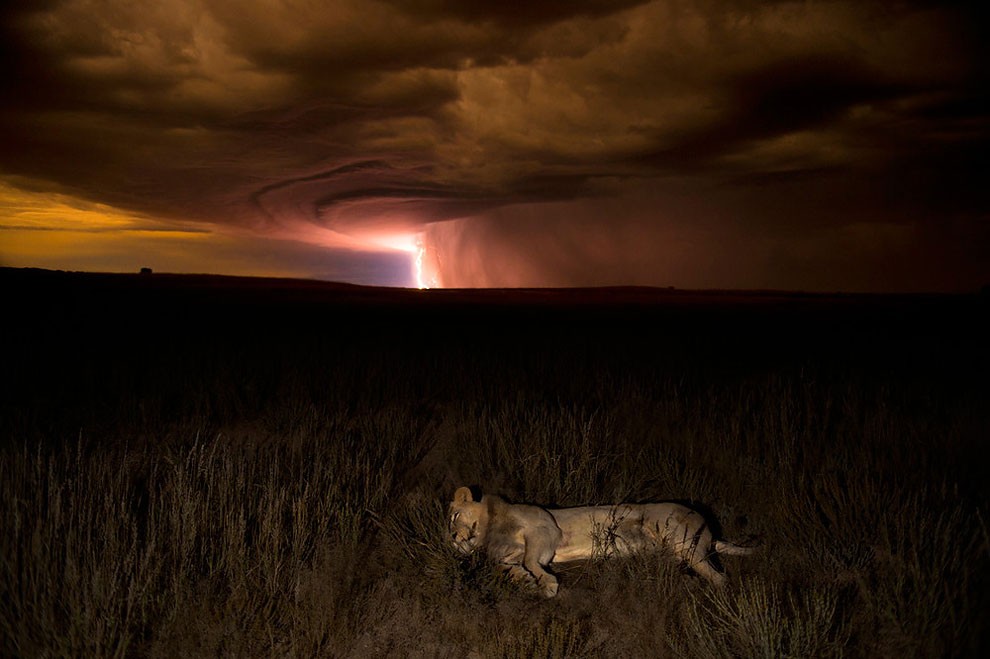 Runner-up. This young male seemed blissfully unconcerned by the lightning and thunder rolling in across the Kalahari. Hannes Lochner, who was taking night shots in the South African part of the Kgalagadi Transfrontier Park, came across him stretched out beside the track. “He raised his head to stare at me a couple of times”, says Hannes, “but he wasn’t really interested in either me or the dramatic goings-on behind him.” Hannes worked fast, framing the lion against the illuminated night sky at the moment a bolt of lightning flashed to the ground. Just after I took this picture, there were a few more lightning bolts and then everything went still and dark again”. (Photo by Hannes Lochner/Veolia Environnement Wildlife Photographer of the Year 2012) 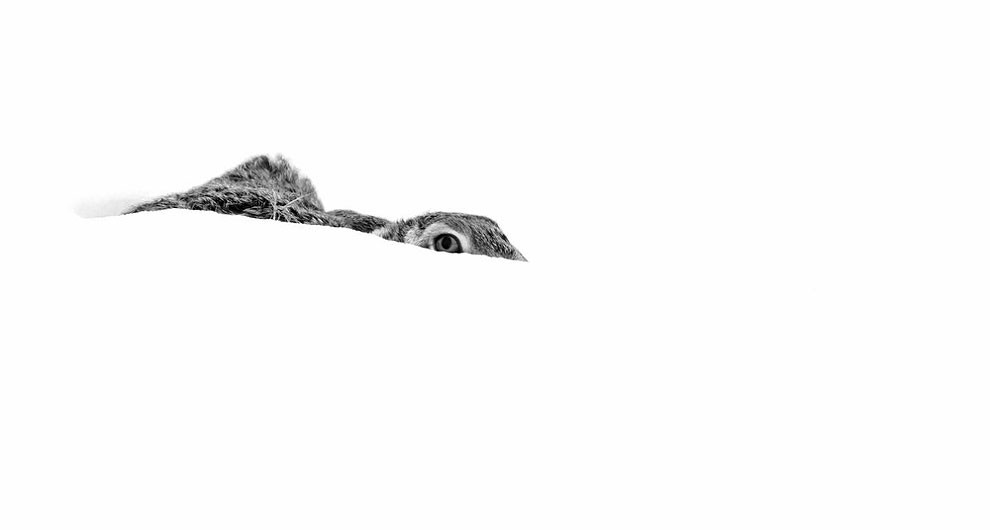 Runner-up. It was a night of snow that gave Owen Hearn the advantage. “After spending countless hours lying in hedges and long grass trying to photograph hares”, says Owen, “I couldn’t believe my luck when I came across this hare just meters away, crouched down in the snow”. Owen also crouched down in the snow and slowly moved forward until he was close enough to fire off four frames. “I am sure it thought it was camouflaged”, he says. Owen’s hare-stalking ground is his grandparents’ Bedfordshire farm. “I like the challenge of trying to get close to hares, as they are so alert and so fast. They have taught me a lot about fieldcraft”. (Photo by Owen Hearn/Veolia Environnement Wildlife Photographer) 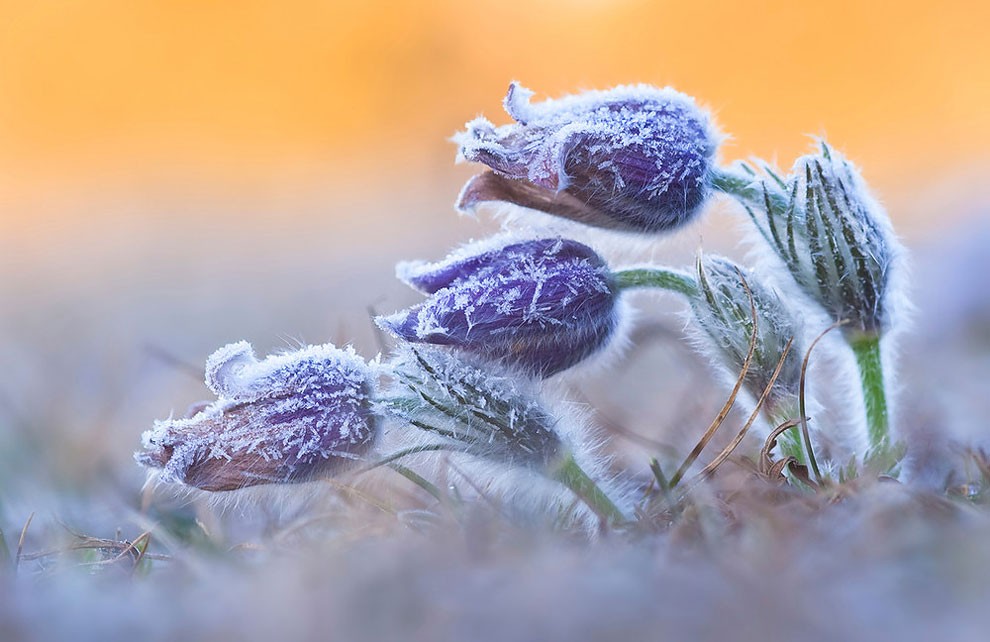 Runner-up. Ever since Daniel Eggert first fell in love with pasque flowers, among the first flowers of spring, he had wanted to photograph them covered in hoar frost. Now it was pasque-flower time once again. He had already identified a spot of chalky grassland near his home where the plants grew, on the rim of the Nördlinger Ries crater (a meteor crater) in Bavaria, Germany. So as soon as a cold, frosty, sunny dawn was forecast, Daniel headed up the hill. “I found the ideal flowers to photograph, but I didn’t have much time”, he says, “because I knew that as soon as the sun rose, the frost would quickly melt”. He took this image just as the rising sun began to bathe the hill in a wonderful orange light. “I love the colors”, he says, “and the contrast between the warm background and the cold ice”. (Photo by Daniel Eggert/Veolia Environnement Wildlife Photographer) 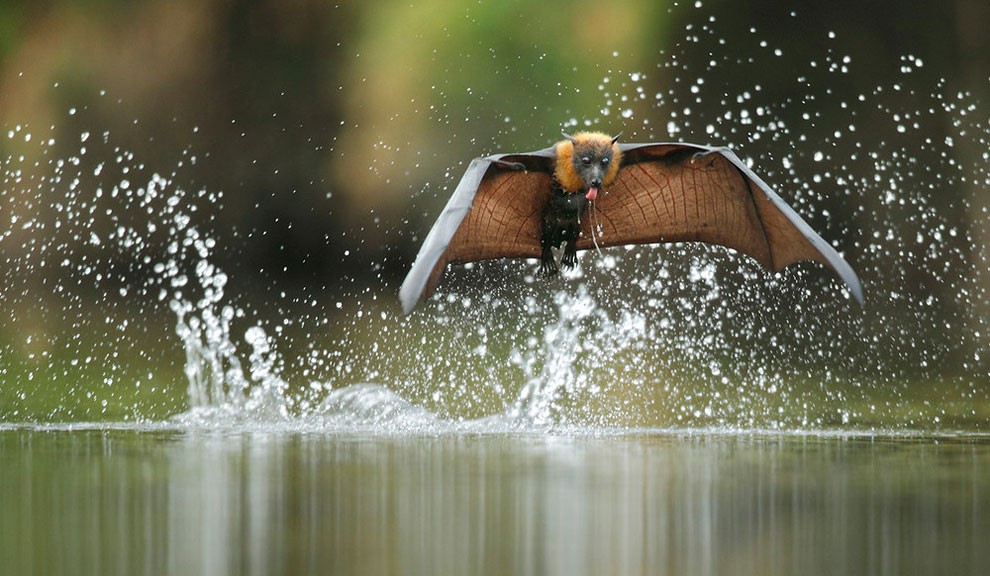 Specially commended. The grey-headed flying fox is the largest bat in Australia – and one of the most vulnerable. Once abundant, there are now only around 300,000 left. The main threats include loss of habitat, extreme-temperature events and human persecution (roosting in numbers, eating cultivated fruit and an undeserved reputation for bearing disease brings it into conflict with people). The bat is now protected throughout its range, but its future remains uncertain. Photographer Ofer Levy spent several days in Parramatta Park in New South Wales photographing the bat’s extraordinary drinking behavior. “At dusk, it swoops low over the water, skimming the surface with its belly and chest”, he says. “Then, as it flies off, it licks the drops off its wet fur”. To photograph this in daylight, Ofer had to be in the right position on a very hot day, with the sun and the wind in the right direction, and hope a bat would be thirsty enough to risk drinking. “This required standing in chest-deep water with the camera and lens on a tripod for three hours a day for about a week in temperatures of more than 40 degrees”. (Photo by Ofer Levy/Veolia Environnement Wildlife Photographer)

Specially Commended. As the snow started to melt, a thick fog began to wrap itself around the forest near Sandra Bartocha’s home in Potsdam, Germany. Envisaging the photographic potential, she grabbed her camera and went straight to the forest. The scene was even more beautiful than she’d expected. “The evening sun created a glow around the tall, wet trunks of the Scots pines”, she remembers. “It was breathtaking”. She experimented with several different focal planes and lenses to try to capture the effect. Eventually, she settled on a mirrorless camera with a tilt lens, allowing her to change the layers of sharpness from parallel to horizontal, so the unsharp areas were not in front but behind and below the main focus. She played around with the focus “to keep the warm, broken light at the top of the frame and the trunks below relatively sharp”. (Photo by Sandra Bartocha/Veolia Environnement Wildlife Photographer) 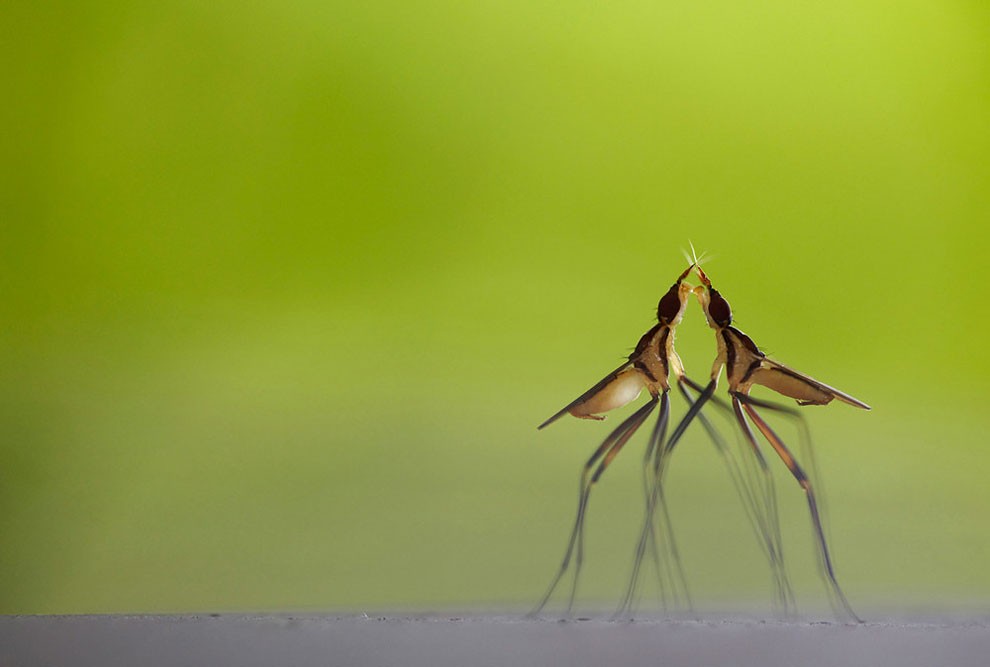 Commended. A scattering of gecko droppings on the sunny veranda of Klaus Tamm’s holiday apartment near Etang-Sale-les-Hauts, on the French island of Réunion, had attracted some unusual-looking insects. They were neriid long-legged flies. Klaus settled down with his camera to watch as they interacted. “Every so often, a couple of males would take a break from feeding and engage in a kind of combat dance that involved spinning around each other”, he says. “They would finish by stretching up to their full one and a half centimeters, then pushing with their mouthparts, shoulders and forelegs until one gained height, before flying away or mating with nearby females. I was so impressed by the harmony in the combat dance that I ended up photographing them for several hours”. (Photo by Klaus Tamm/Veolia Environnement Wildlife Photographer) 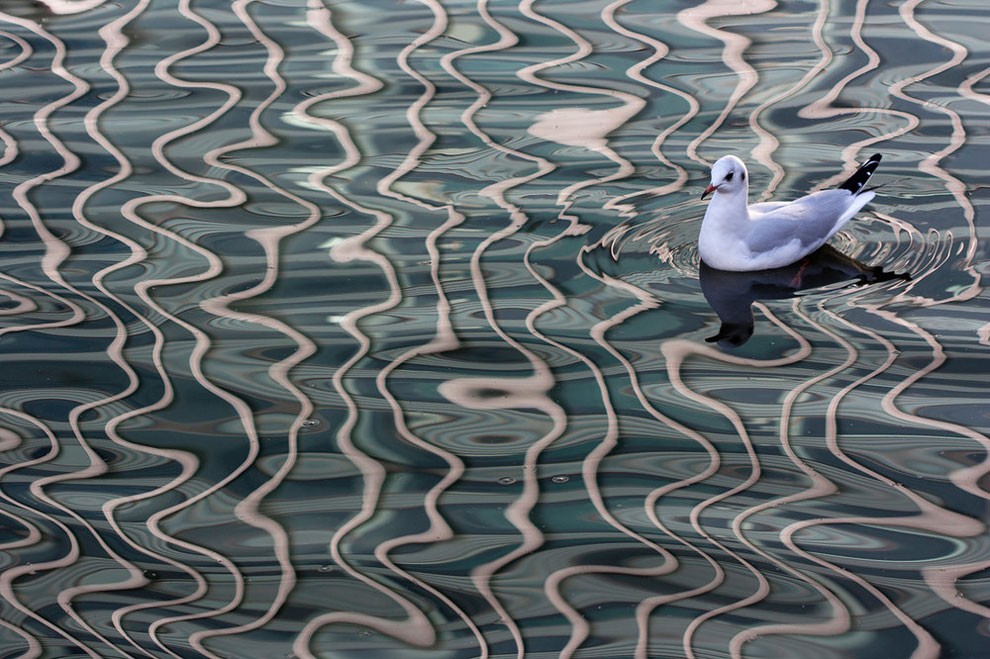 Winner. Some of the tallest buildings in London surround the docklands at the heart of the business and financial district of Canary Wharf. As Eve Tucker walked along the wharf, a bird caught her eye. It was a black-headed gull, of which there are many in the city. But this one was resting on a very remarkable area of water. Eve realized that she was looking at reflections of the straight lines of the nearby office block, distorted into moving swirls. “The effect was so unusual – it gave a beautiful setting for an urban wildlife image”. Like all true photographers, Eve had noticed what others most often fail to see, even when it’s right in front of them. (Photo by Eve Tucker/Veolia Environnement Wildlife Photographer) 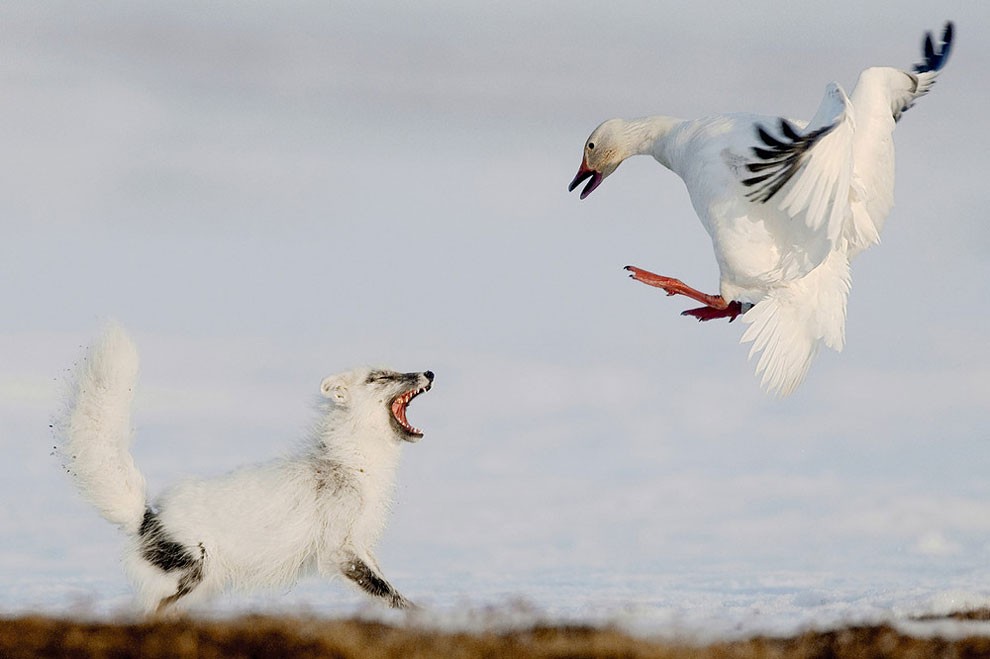 Commended. In late May, about a quarter of a million snow geese arrive from North America to nest on Wrangel Island, in northeastern Russia. They form the world’s largest breeding colony of snow geese. Photographer Sergey Gorshkov spent two months on the remote island photographing the unfolding dramas. Arctic foxes take advantage of the abundance of eggs, caching surplus eggs for leaner times. But a goose (here the gander) is easily a match for a fox, which must rely on speed and guile to steal eggs. “The battles were fairly equal”, notes Sergey, “and I only saw a fox succeed in grabbing an egg on a couple of occasions, despite many attempts”. Surprisingly, “the geese lacked any sense of community spirit”, he adds, “and never reacted when a fox harassed a neighboring pair nesting close by”. (Photo by Sergey Gorshkov/Veolia Environnement Wildlife Photographer) 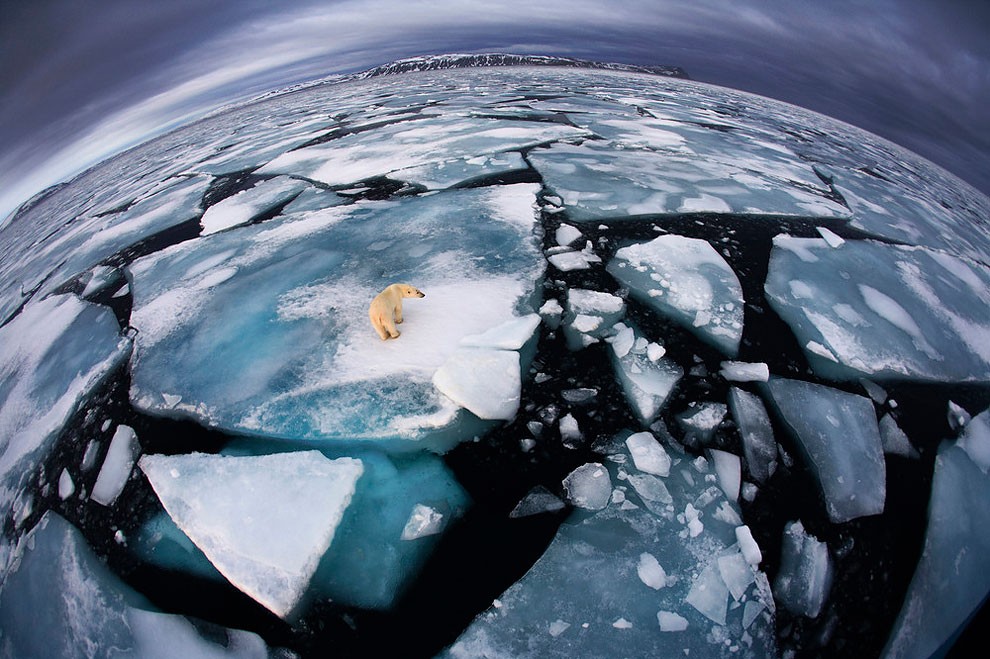 Winner. Photographer Anna Henly was on a boat in Svalbard – an archipelago midway between mainland Norway and the North Pole – when she saw this polar bear at around four in the morning. It was October, and the bear was walking on broken-up ice floes, seemingly tentatively, not quite sure where to trust its weight. She used her fisheye lens to make the enormous animal appear diminutive and create an impression of “the top predator on top of the planet, with its ice world breaking up”. The symbolism, of course, is that polar bears rely almost entirely on the marine sea ice environment for their survival, and year by year, increasing temperatures are reducing the amount of ice cover and the amount of time available for the bears to hunt marine mammals. Scientists maintain that the melting of the ice will soon become a major problem for humans as well as polar bears, not just because of rising sea levels but also because increasing sea temperatures are affecting the weather, sea currents and fish stocks. (Photo by Anna Henly/Veolia Environnement Wildlife Photographer)