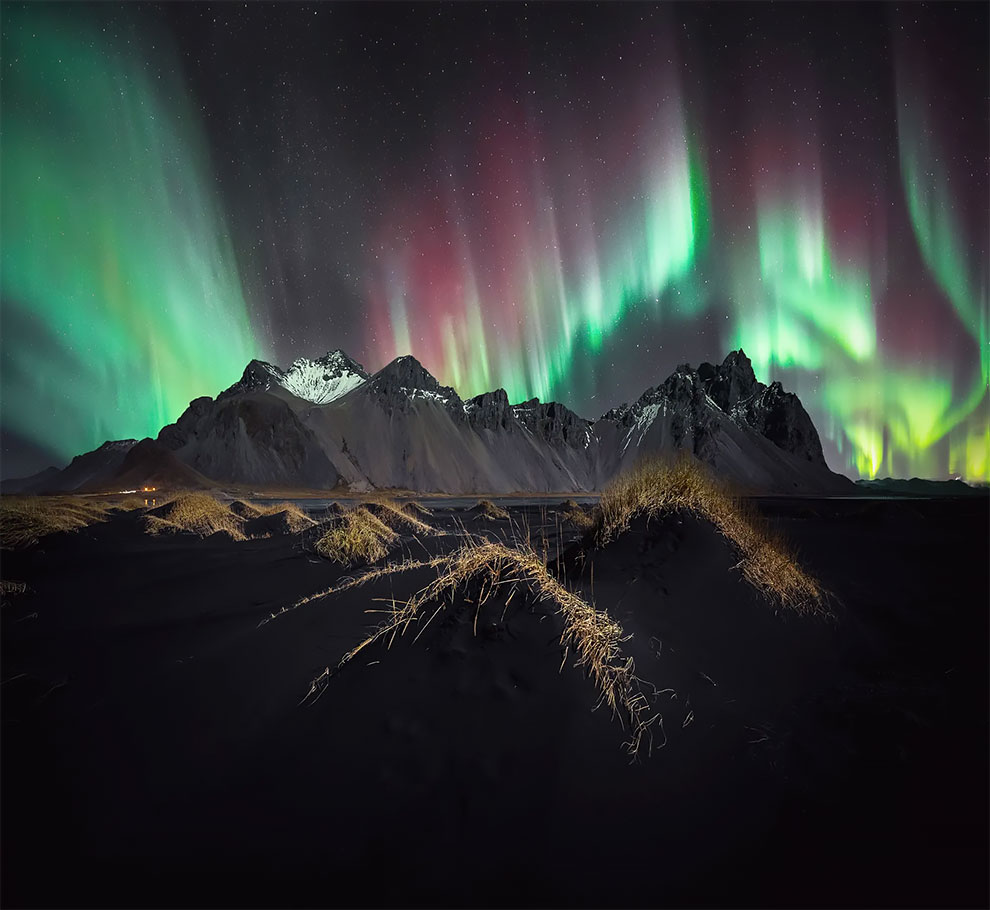 Stefan Liebermann
“The full spectrum of the northern lights over the iconic Vestrahorn location in Iceland. What a dreamlike experience! A G3 strong geomagnetic storm hit the earth on 31 October and produced these wonderful colours” 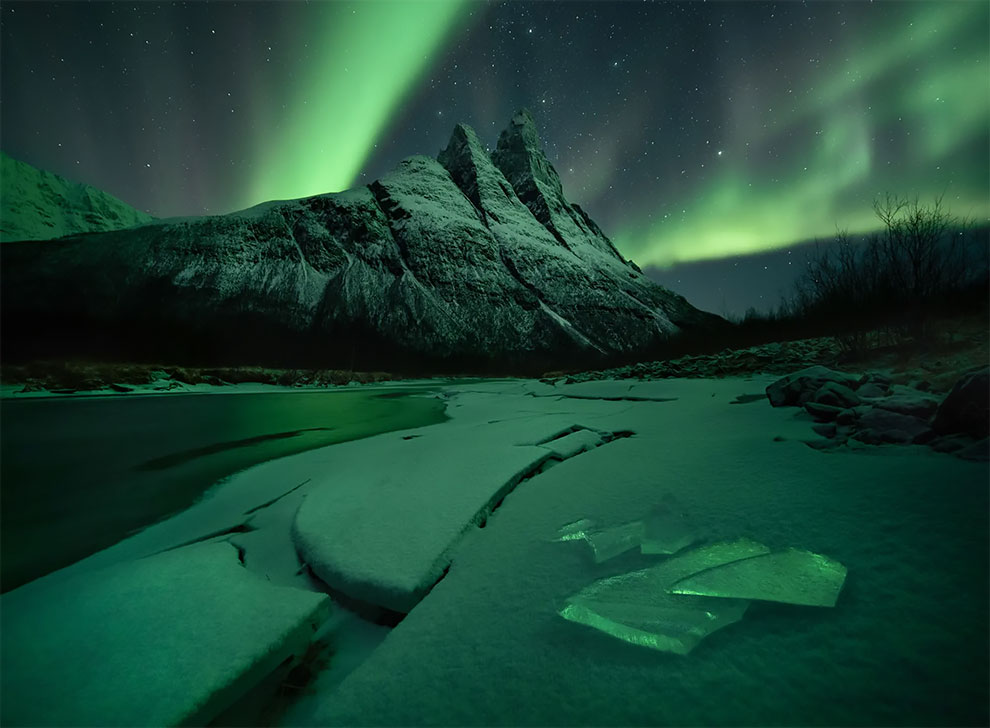 Virgil Reglioni
“Northern Norway hosts some of the most beautiful and dramatic sights you can find in northern Europe. Some nights, strong intensity auroras are predicted, which leads to incredible, bright displays spreading across the sky. The cold temperatures form ice shapes by the riverbank and these structures help direct your eyes in the right direction”

When the Stars Align – Tombstone territorial park in Yukon, Canada 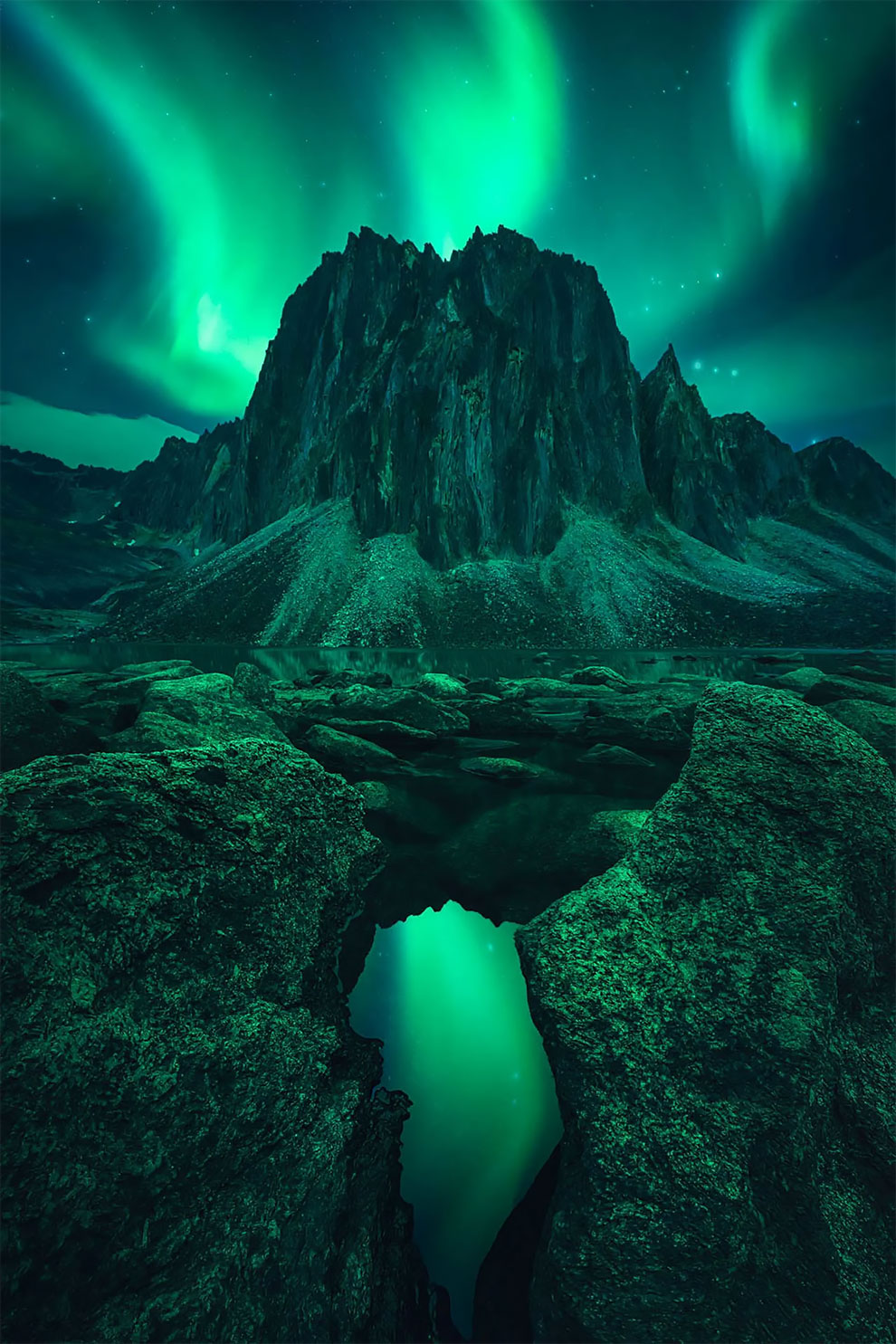 Joshua Snow
“What a sight to behold. The incredible majesty of the aurora borealis. Lights that move and dance through space. Fleeting moments of vibrancy and shimmery glow. Life is much the same experience if you let it be. Learn to savour the little passing moments. Learn to ebb and flow with space and time, and glow when the inspiration strikes” 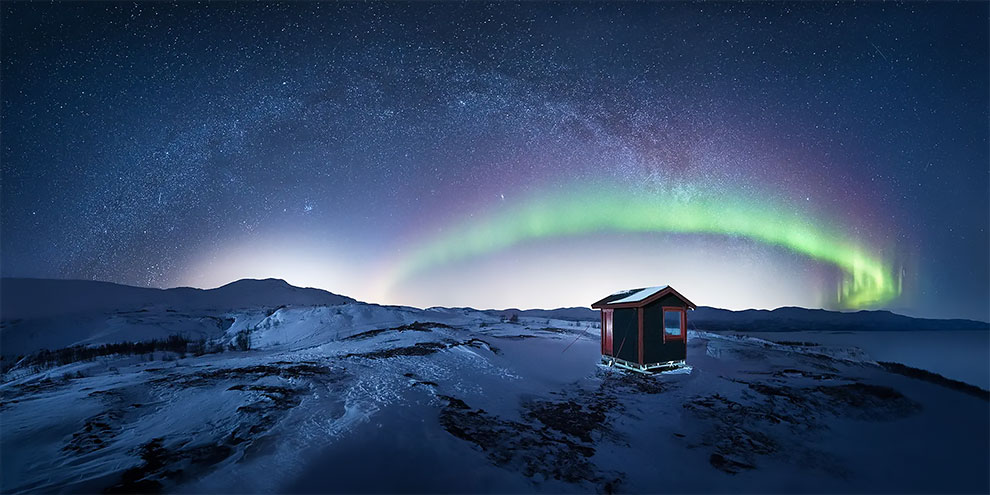 Stefano Astorri
“Shooting the Milky Way and the aurora together was one of my resolutions for 2021. I never imagined I would fulfil this one so soon. It was a freezing, windy night and I went to a location where I hoped to see the lights rising between two mountain peaks. The “green lady” started dancing suddenly and then the Milky Way, in her winter dress, joined the party. I readjusted the composition to include the red cabin in the shot. The result is a photo that merges 12 vertical shots at 14mm (about 270 degrees) to fully cover the two overlapping arches” 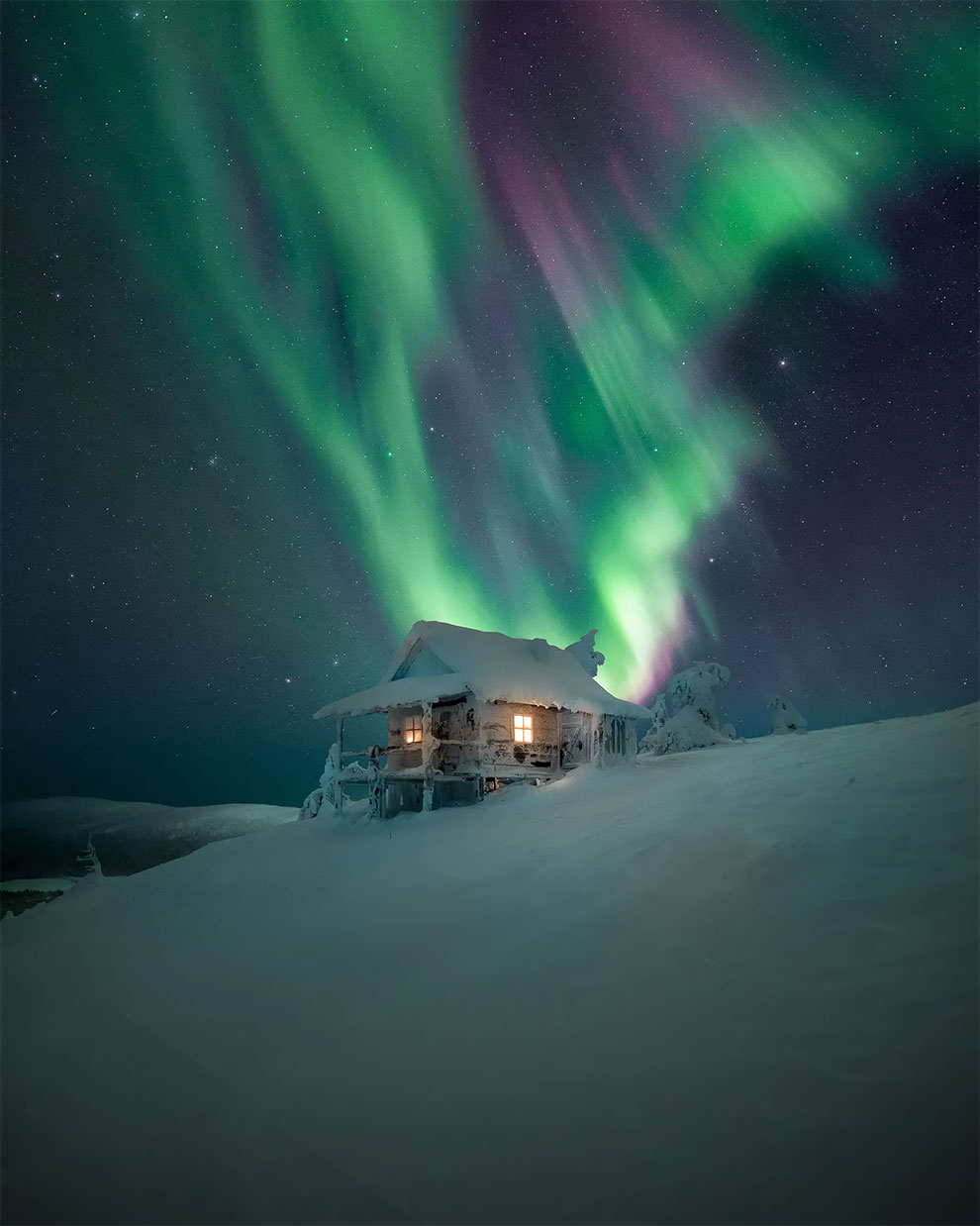 Olli Sorvari
“I know the journey is often more important and memorable than the results, and after taking this picture I think this was a trip to remember. It wasn’t a long hike but when you don’t have snowshoes and you sink half a metre with every step you take, it feels 50 times longer. The next time I go there, I’ll follow the skiing routes. The whole way up it was partly cloudy with no signs of the northern lights. Then suddenly I could capture what I was looking for. I also managed to get decent shots of the winter Milky Way before the real show started, which was the cherry on the cake of this night” 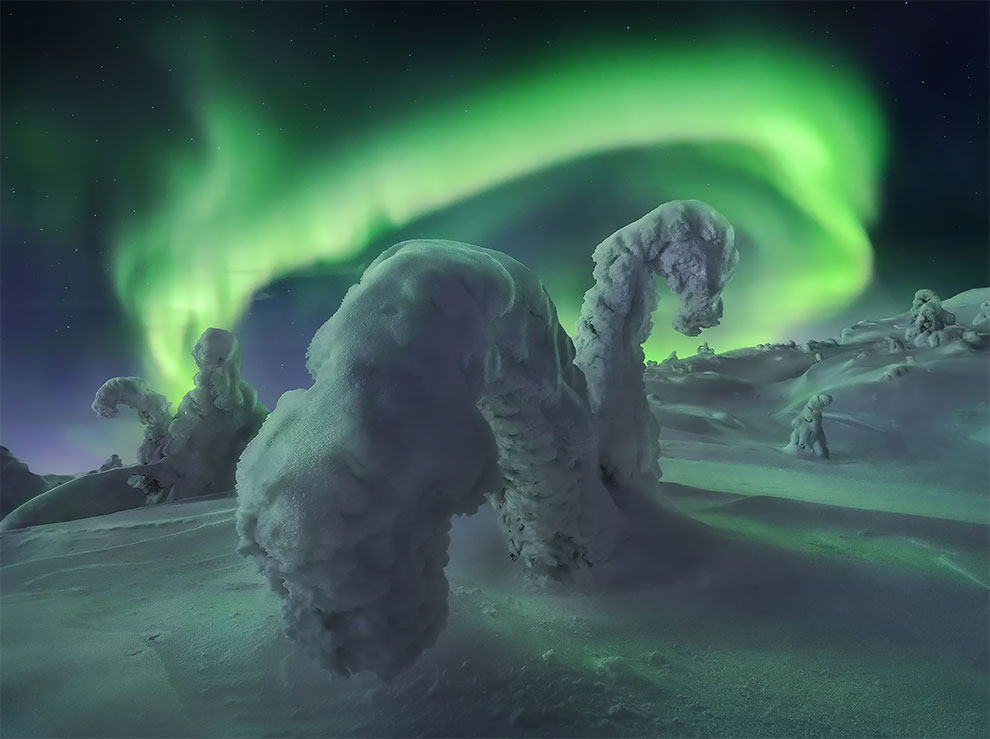 Sergey Korolev
“When I started learning how to take landscape photographs, I wasn’t impressed by images of the northern lights because most contained nothing in the composition other than the lights and the sky. But one day I saw Marc Adamus’s photographs with the aurora borealis over beautiful mountain scenery and I was impressed. Since then, I have had a new passion – taking northern lights pictures where the landscape and its composition play the main role and the aurora is in harmony. I focused on the “snow monsters” to make this shot look like an alien scene” 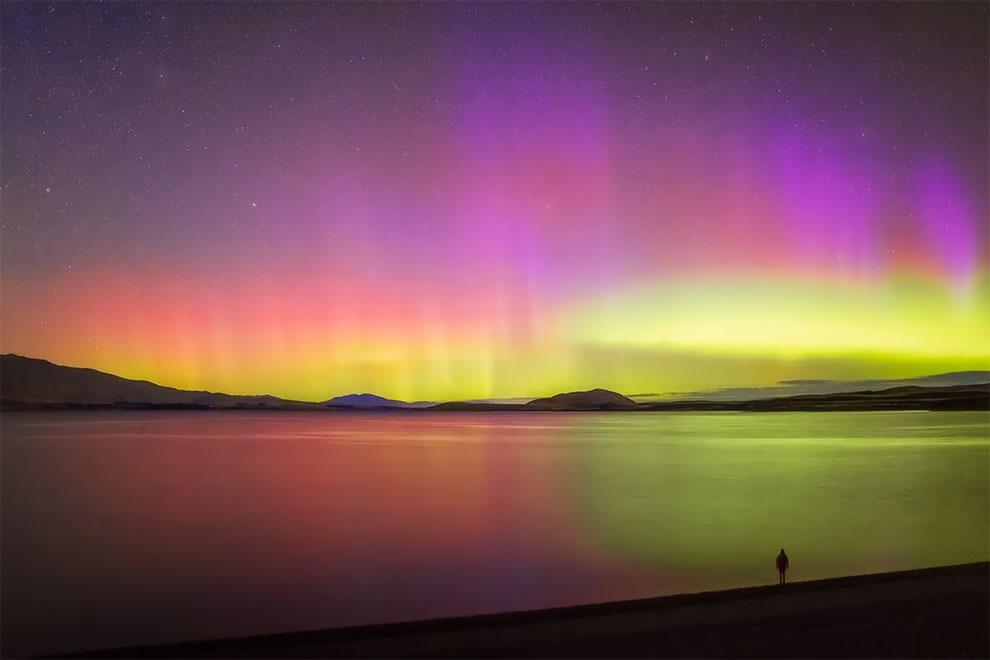 Larryn Rae
“I was on a photography trip when aurora alerts began popping up on my phone, so we started searching for a unique place to shoot them from. We ended up at this lakeside location, and as soon as the sunset faded and dusk fell, we could already see the colour and shape of the aurora happening. The next few hours, the sky was filled with incredible hues as the pillars danced across the sky in one of the best displays I have seen for years. The aurora is my favourite night-sky phenomenon to capture, and this night was simply incredible” 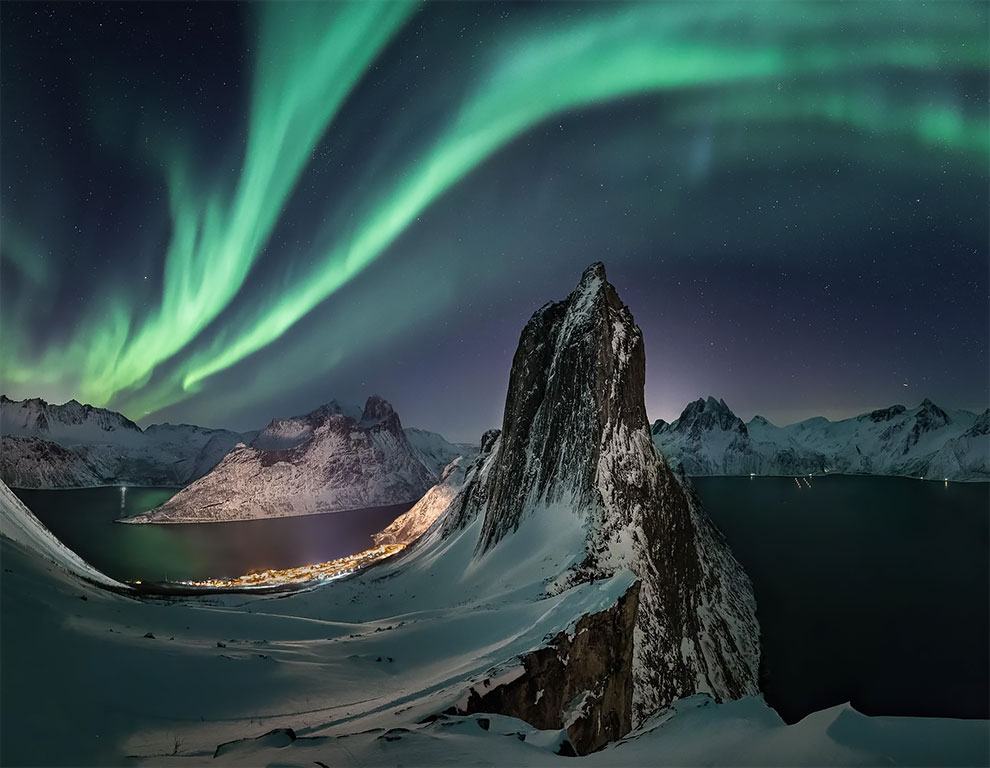 Frøydis Dalheim Senja
“This image is the perfect representation of one of my best nights seeing the northern lights in Senja, northern Norway. The views were stunning, with snow-capped landscapes, spectacular mountains, and a dancing aurora that coloured everything green. It was truly a night to remember. The conditions were perfect this evening in March, not too cold. The northern lights appeared not long after I arrived and lasted for a long time. I returned home really happy and grateful for this amazing experience” 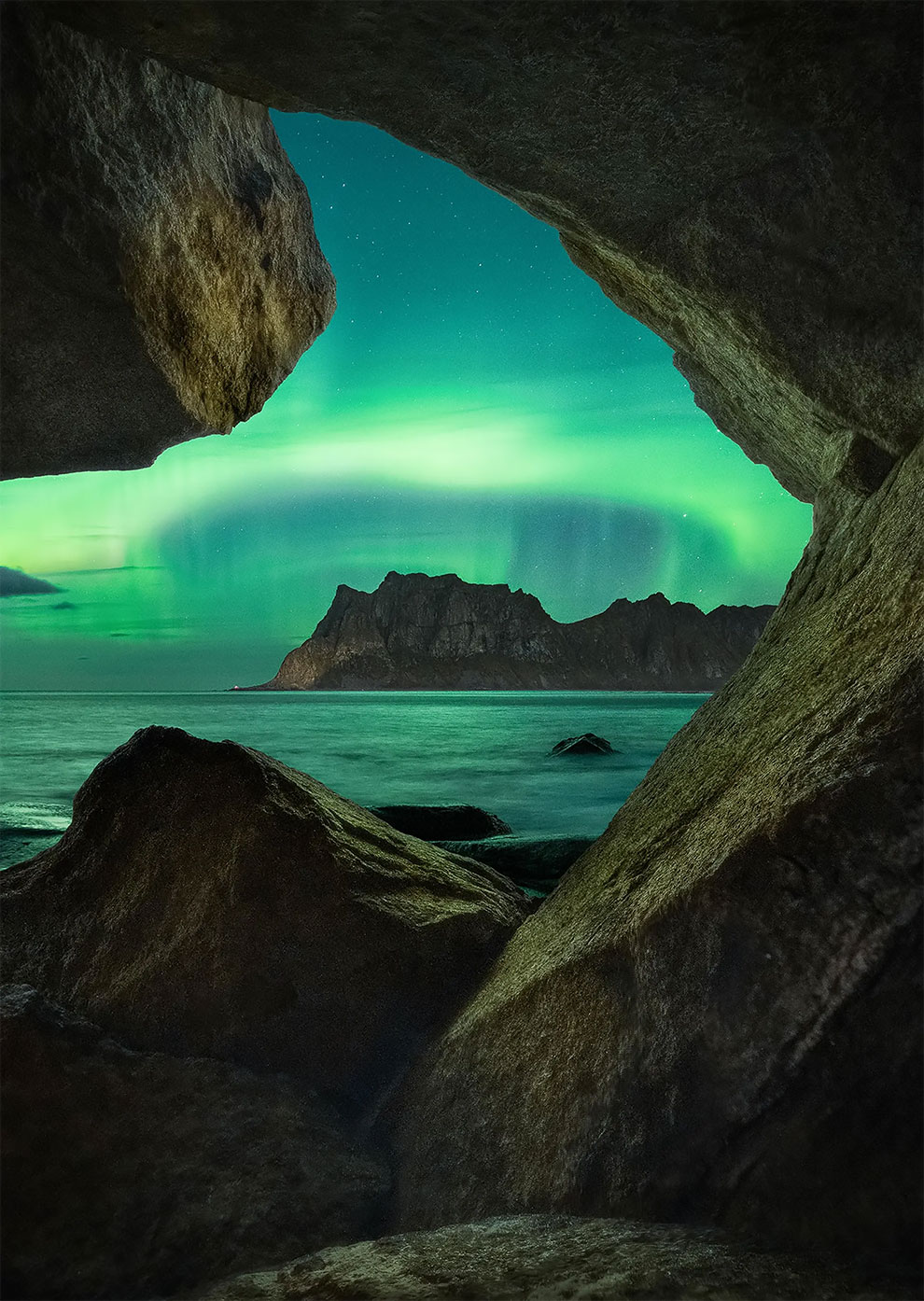 Giulio Cobianchi
“This was one of the most beautiful green nights I have experienced since living in Lofoten. This was just the beginning of a long night of chasing the aurora until sunrise. I have been inside this hidden cave in all seasons since I like to explore locations and find new compositions that have never been seen before. Inside the caves, it is never easy to photograph; you have to use more techniques in the shooting phase, such as focus stacking and multi-exposure, for example, but I must say that these are the compositions I appreciate the most. I love the natural frame and the three-dimensional effect that they give” 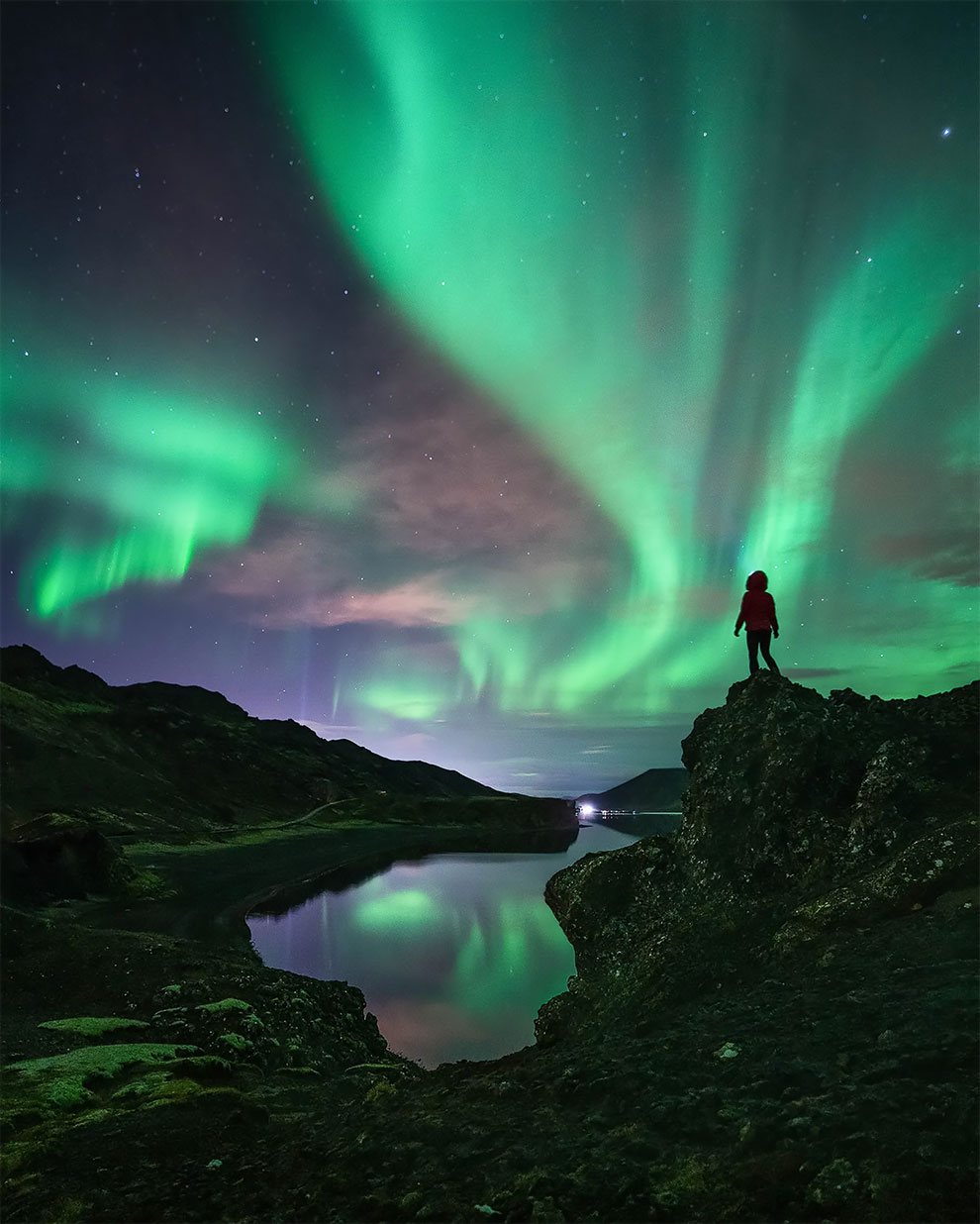 Agnieszka Mrowka
“Another long and beautiful night in Iceland. I had had the foreground for the northern lights in mind for some time already and just waited for the perfect condition to come and capture it. I needed strong northern lights, a clear sky on the Reykjanes peninsula, and calm, windless weather, which is quite rare in Iceland. The photo was challenging in the sense that I had to run back and forth to adjust the settings on my camera, depending on the strength of the northern lights. The place I was standing was also a bit tricky, as there was not enough space for my feet, so I could not even fully stand straight. When the lights came, however, I was able to freeze, staring at the mesmerising sky above”

Aurora Sherbet in the Apostles – Bayfield, Wisconsin, US 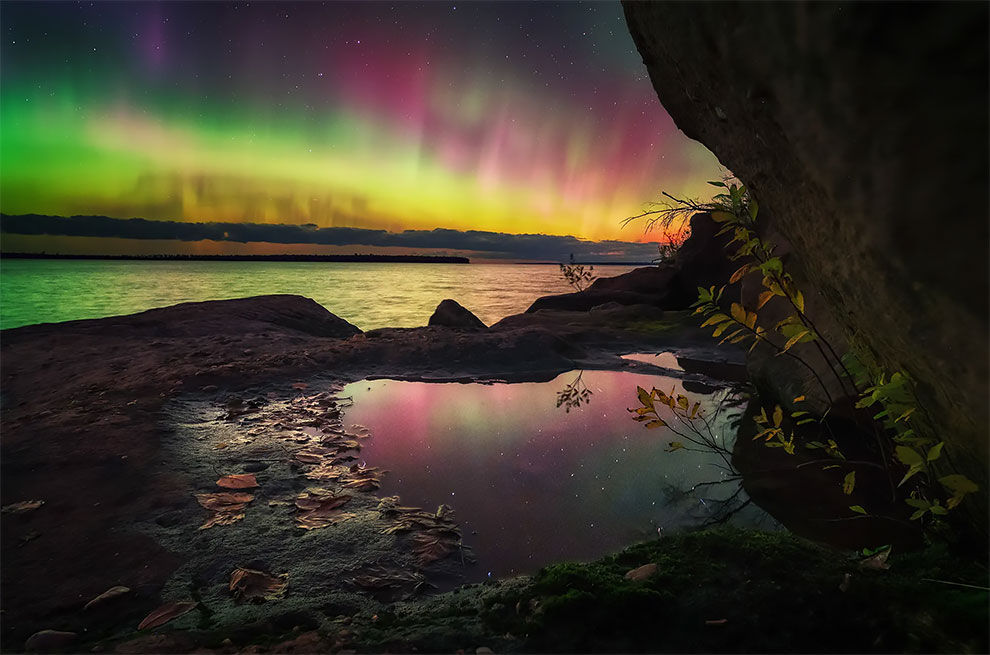 Marybeth Kiczenski
“The events of 3 November will stay with me for ever. The aurora sparked on this night was from a combination of an M-class solar flare and a CME and together they packed a punch. I saw the initial ‘hit’ in the data, jumped into the car and drove eight hours north to escape the cloud cover over the Midwest Great Lakes region. Hunting for compositions in the dark is always a challenge. The amount of colour detail in this image is amazing. I’ve never seen so much teal and purple. The whole night felt like a dream”

For the Northern Lights – Kolsky district of Murmansk Oblast, Russia 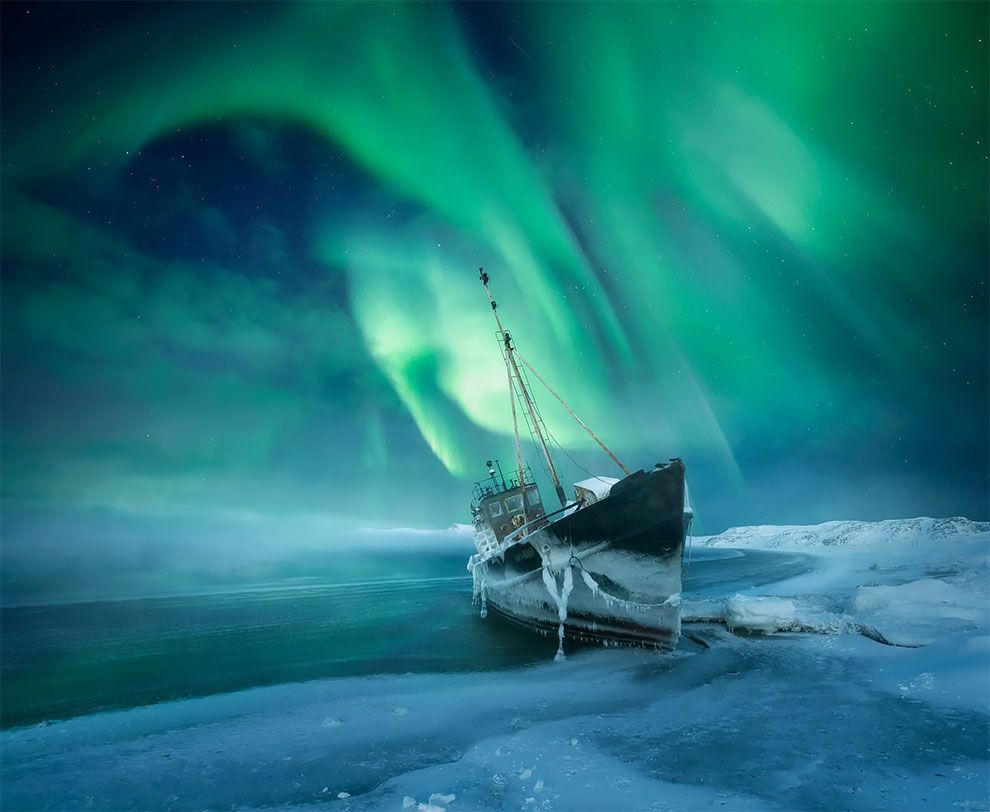 Aleksey R.
“Nature is mysterious and unpredictable, and often leaves us open-mouthed at the inexplicable manifestations of its power. This image was captured in February in Teriberka, on the Barents Sea coast. This night was definitely special. The perfect conditions for shooting the northern lights came together: frost, ice, a full moon, a clear night and no wind. The weather was extremely difficult; the temperature was -34C but flames like these make you forget the temperature” 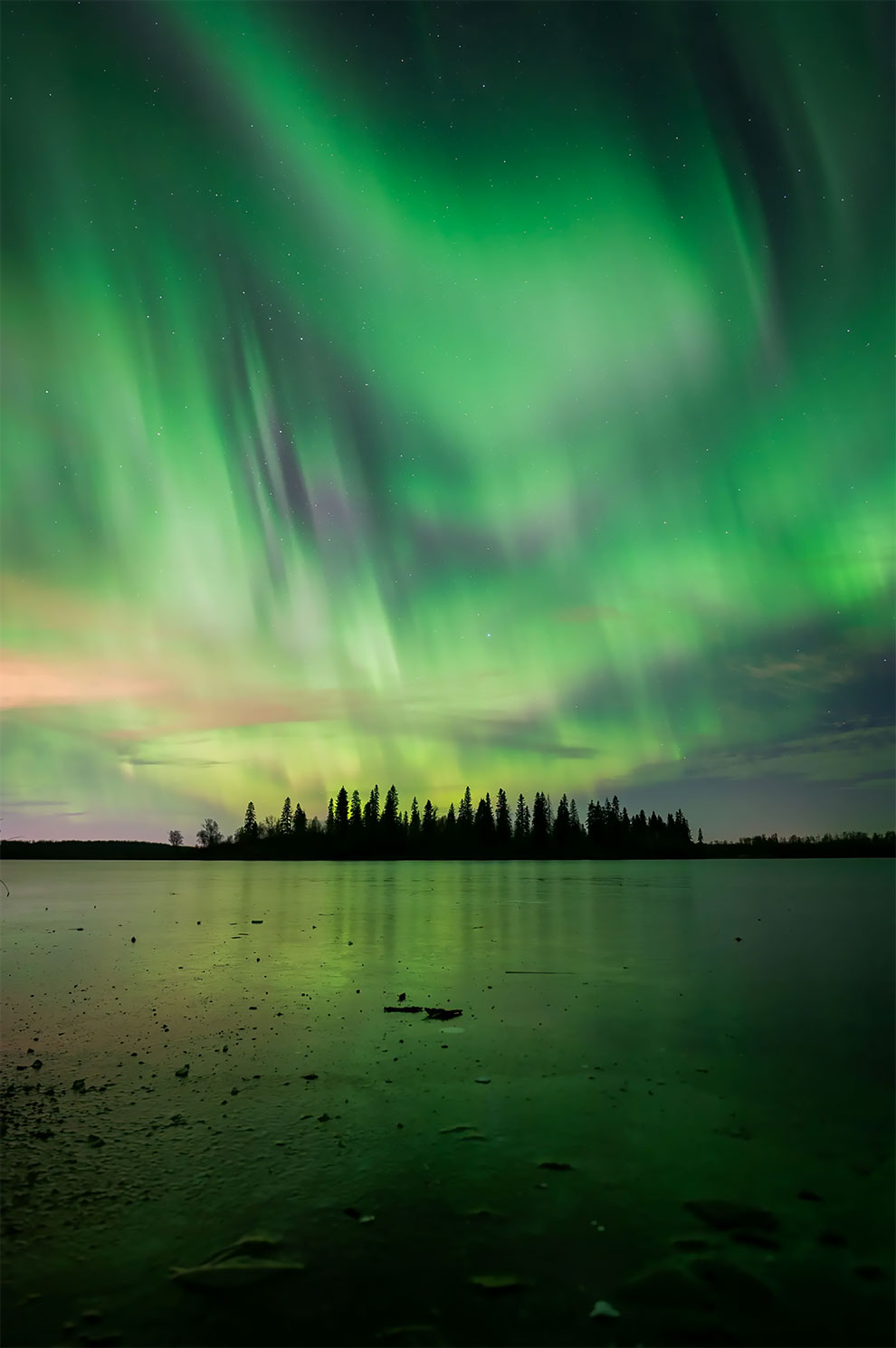 Mark Jinks
“In the overnight hours of 3 and 4 November 2021, we experienced one of the most powerful displays of aurora at mid-latitudes. I had always wanted to capture the lights over this island. After four hours of mediocre aurora, the skies finally came alive. The aurora danced and shimmied across the thin sheet of ice covering the lake, and varied in intensity as sub-storms flared. Coyotes howled as if to voice their approval, and during the quiet lulls a great-horned owl could be heard in the distance. I took this image during an intense period before 2am” 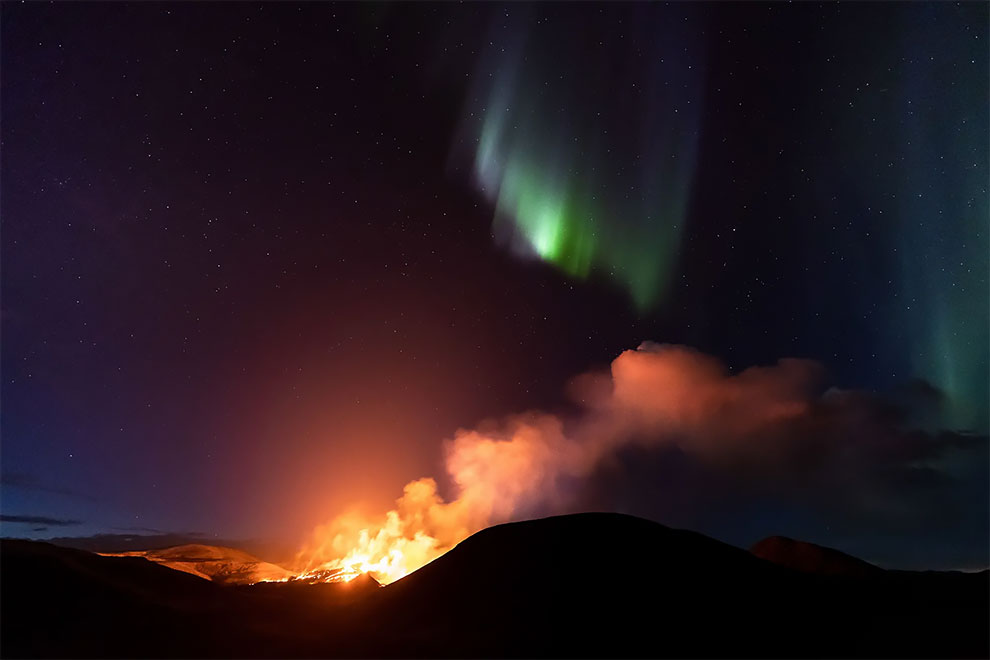 Jeroen Van Nieuwenhove
“One month into the eruption of the Geldingadalir volcano, I wondered whether it would be possible to photograph the aurora above it. It’s the holy grail of photography in Iceland, a once-in-a-lifetime capture. That night seemed like one of the last opportunities before the nights got too bright again. Waiting in the freezing wind made my body temperature plummet. Suddenly everything changed. The clouds opened and I saw the aurora dancing above. I couldn’t believe my luck! I took shot after shot of the event that unfolded before me”

Forest of the Lights – Alaska, US 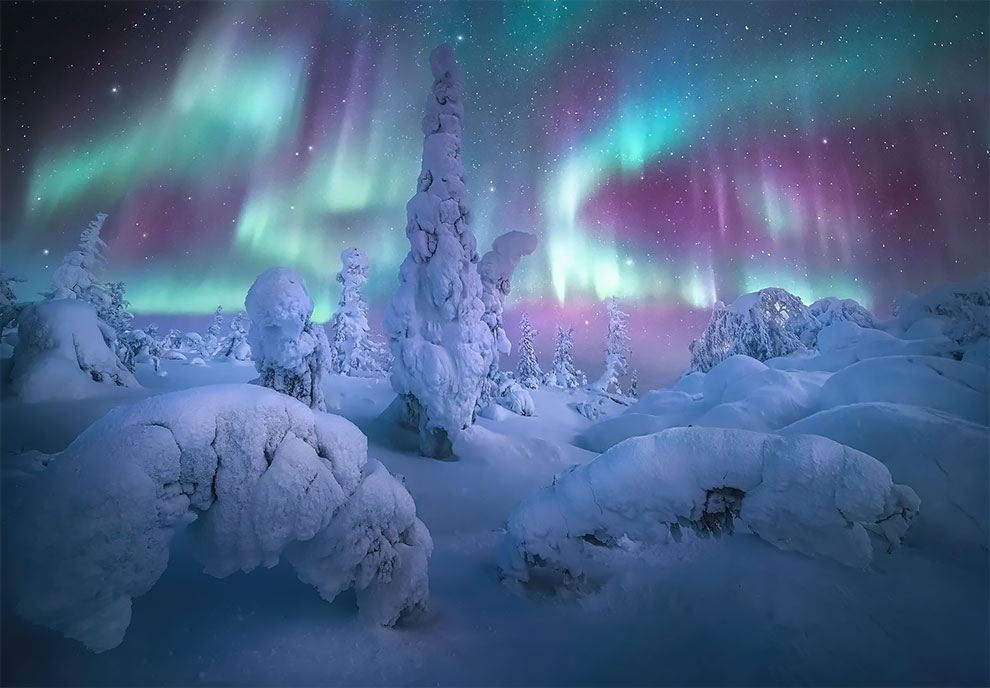 Marc Adamus
“Wandering around these forests coated in rime ice is one of the most magical experiences but also one of the most difficult to capture. Temperatures are often -30C and below, and negotiating the easily broken, crusty snow on snowshoes with nothing but a headlamp makes for great challenges in hiking and composing. I used the last light of twilight to set up the shot you see here and returned to it hours later as the lights were dancing overhead”

Photo Manipulations by Geir Akselsen
"Mersey Paradise": Photographer Tom Wood Spent Decades Photographing The Pubs, Clubs And Bus Rides Of Liverpool – And The People Who Inhabited Them
Bad Girl Mugshots From Between The 1940s And 1960s
Getty Images Pictures Of The Year 2018: Sports
Portrait Photos Defined Hairstyles of American Young Men in the 1970s
Anthropocene Mapping: The Human Influence On Earth
Photographer Noe Alonzo Shoots Stunning Rainy Photos Of Seoul With His Phone
Primary Colors
Frame and Glory: Artist Captures Improvised Goalposts Around the World
"Tattoos" Project by Scott R. Kline
Brilliant Automotive Photography By Daniel Cali
Different Types of Rebirth: Stunning Underwater Series by Marta Syrko
Stunning Photos Capture Bicycles From Underneath In Rarely Seen Angles
Sullen Waters: The Surreal Poetic Photo Artworks Of Nádia Maria
2016 Wildlife Photographer Of The Year Winners
Truthful Images That Show Why Holocaust Memorial Selfies Are So Disrespectful
Hilarious Photos Of Pet Antics From The Comedy Pet Photography Awards 2020
Someone Found An Old Photo Album Full Of Pics Of This Woman And Hollywood Celebrities In A Thrift Shop
The Royal Photographic Society's 2019 Science Photographer Of The Year Shortlist
Funniest Photos From The Comedy Pet Photography Awards 2021
Rare Photographs Of The Dancing Devils Of Liberia
Explorer’s Stunning Photographs of The Arctic Sun from 100 Years Ago
This Travel Account Will Make You Feel Like A Kid Again
Colorful Photos Of The Latin America's Interiors From The 1980s And 1990s
awards, contest, lights, northern, winners