Light and color, he says, “inspire people to live and open their hearts to the world.” And so his ethereal art sets out to showcase the lives and dreams of the international community and the fairy tale wonder of the world. And it succeeds remarkably well. For the past decade he’s been traveling the globe as a renowned landscape photographer—not just on his own, but as a guide for other soul-seekers interested in finding themselves in the light and lives of the farthest gorgeous remote corners of our fair planet. Each photograph, each captured instance of life, has a story. 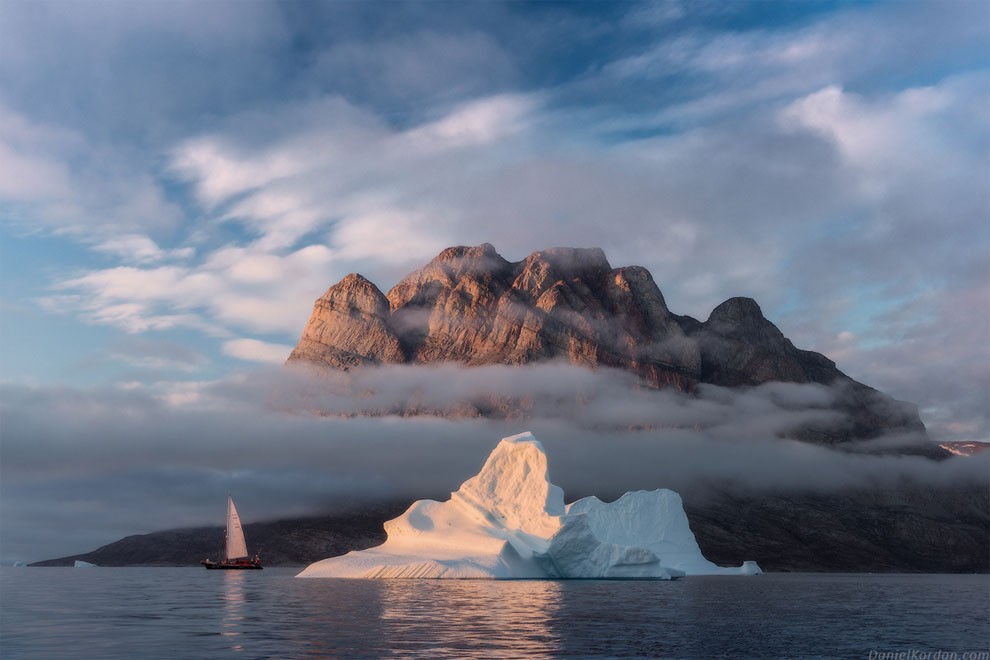 “Photo from my recent expedition to Greenland. Our yacht Peter the First sailing near Umanak island. I have arrived to Canada today for one month. I am making a project in Rocky Mountains.” 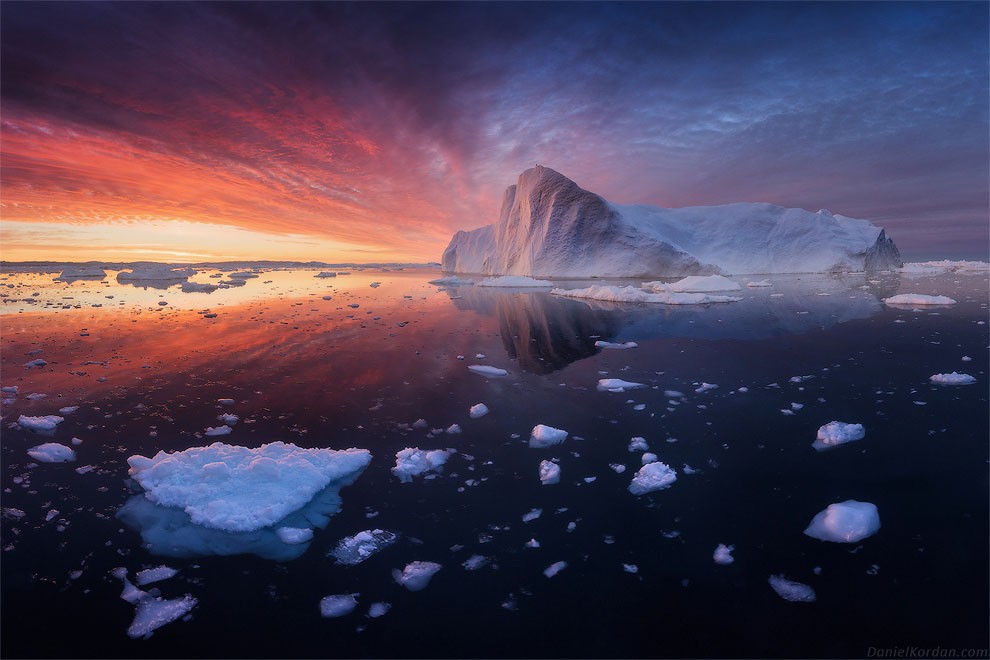 “One of the flaming sunrises at Disko bay. My Greenland yachting expedition in august 2015.” 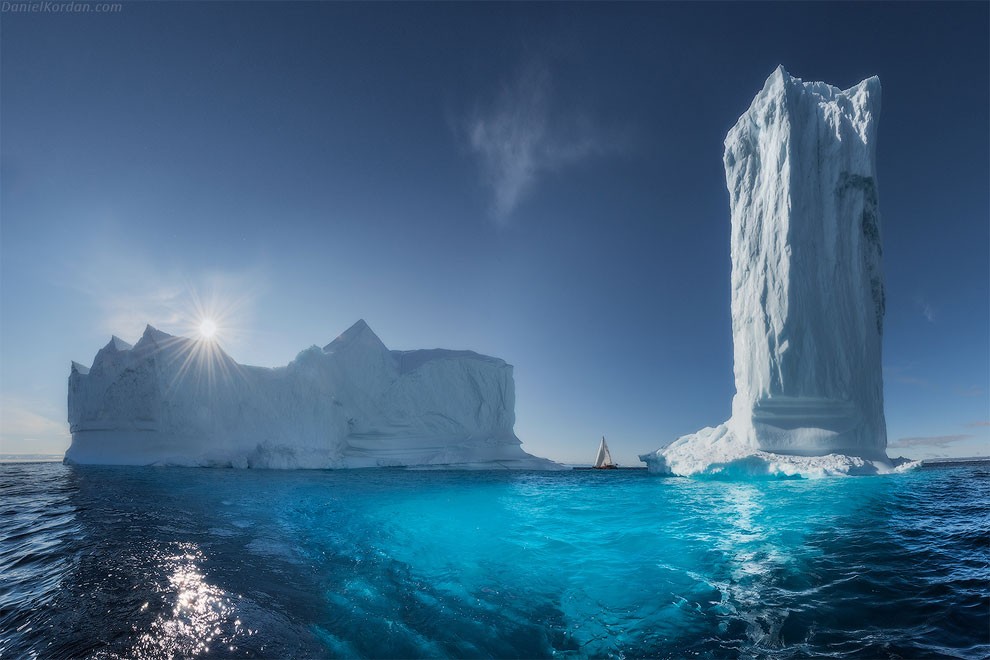 “I’ve just landed in Ilulissaat from our yacht after 2 weeks of my Greenland photo workshops. It took us 2 months to sail on our special yacht “Peter the 1st” from Saint-Petersbourgh to Disko bay and 3 more weeks to explore the area. Our Greenland expedition reminded me of Jack London stories which I admired so much in my childhood. We looked for whale cemetery, marmor caves, we hiked up to 1-km edges above the icecap. We have found an old whale-hunters’ pub and our crew gave there a guitar concert. We’ve even encountered a new thermal pool at Disco island. I felt like an explorer of hidden treasures each time of landing. I bet no one shoot most of these places I’ll show you next few weeks. Stay tuned and do not forget to follow the story of our unique yachting expedition throughout the Greenland.” 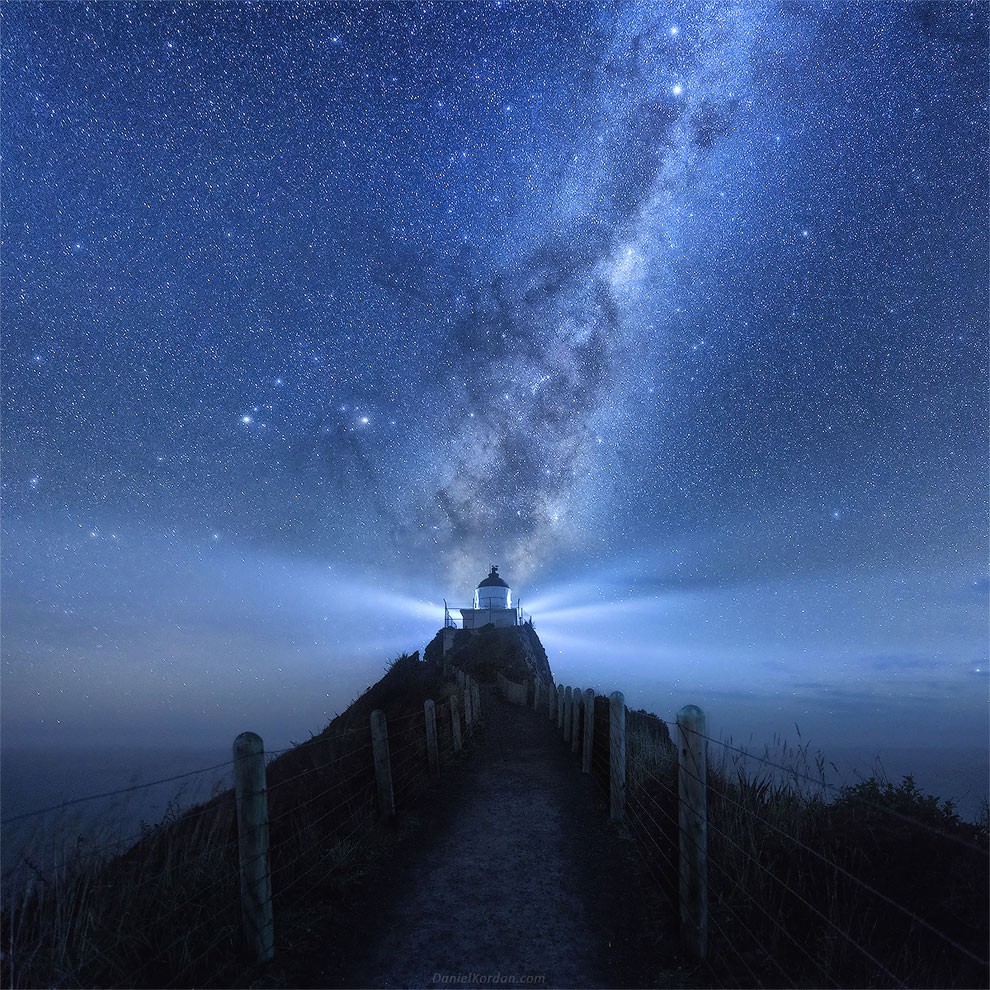 Birth of the Universe 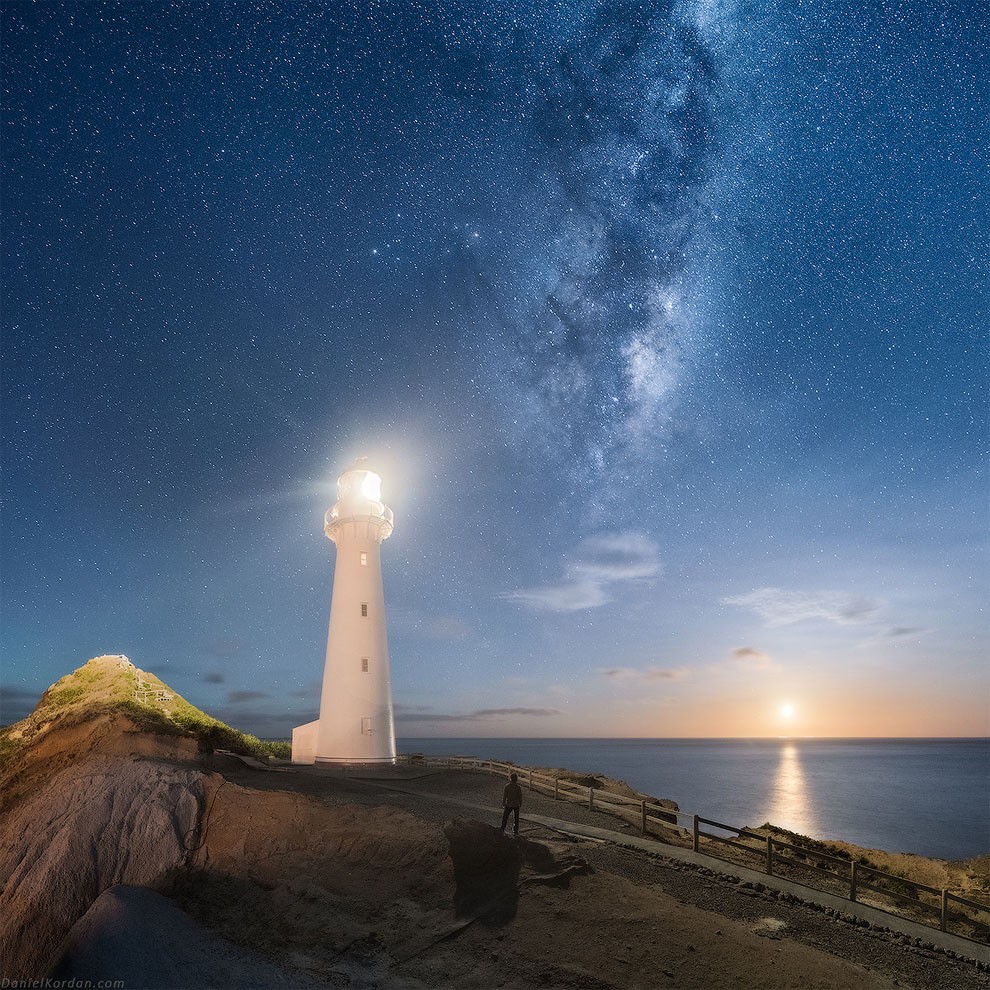 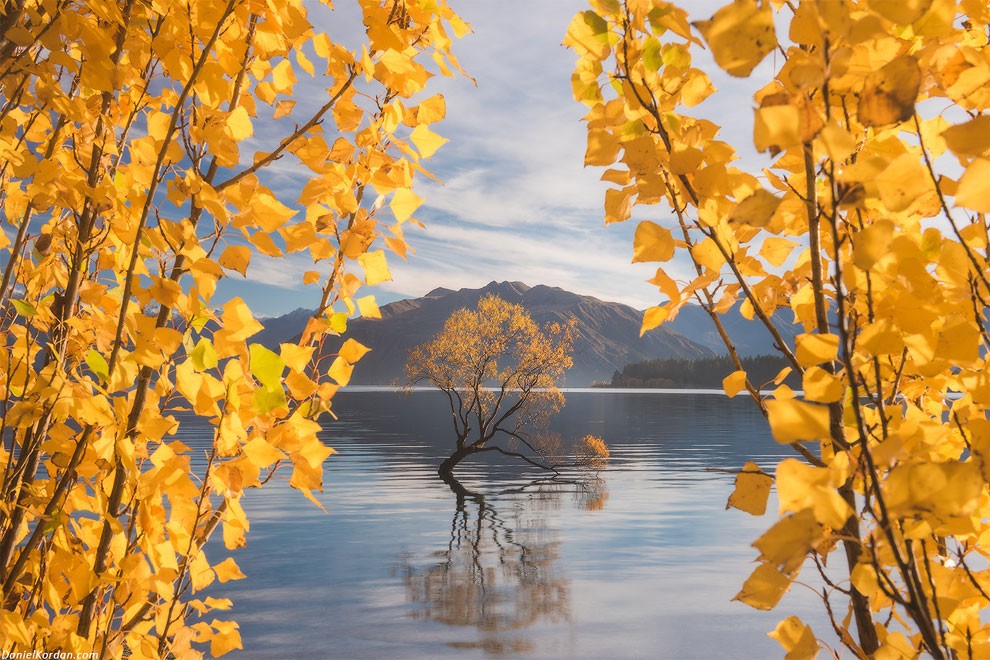 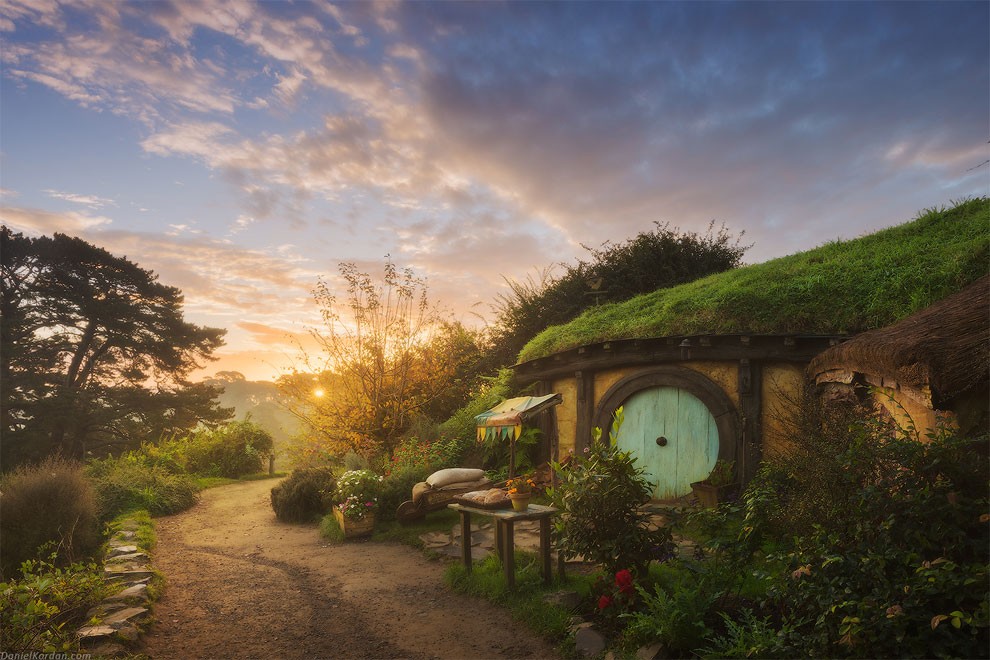 “Another dream came true! I’ve organized morning walk at Shire for participants of my New Zealand photo workshop. Sunrise was amazingly beautiful: we were absolutely alone in the park while hobbits were dreaming at their cozy homes.” 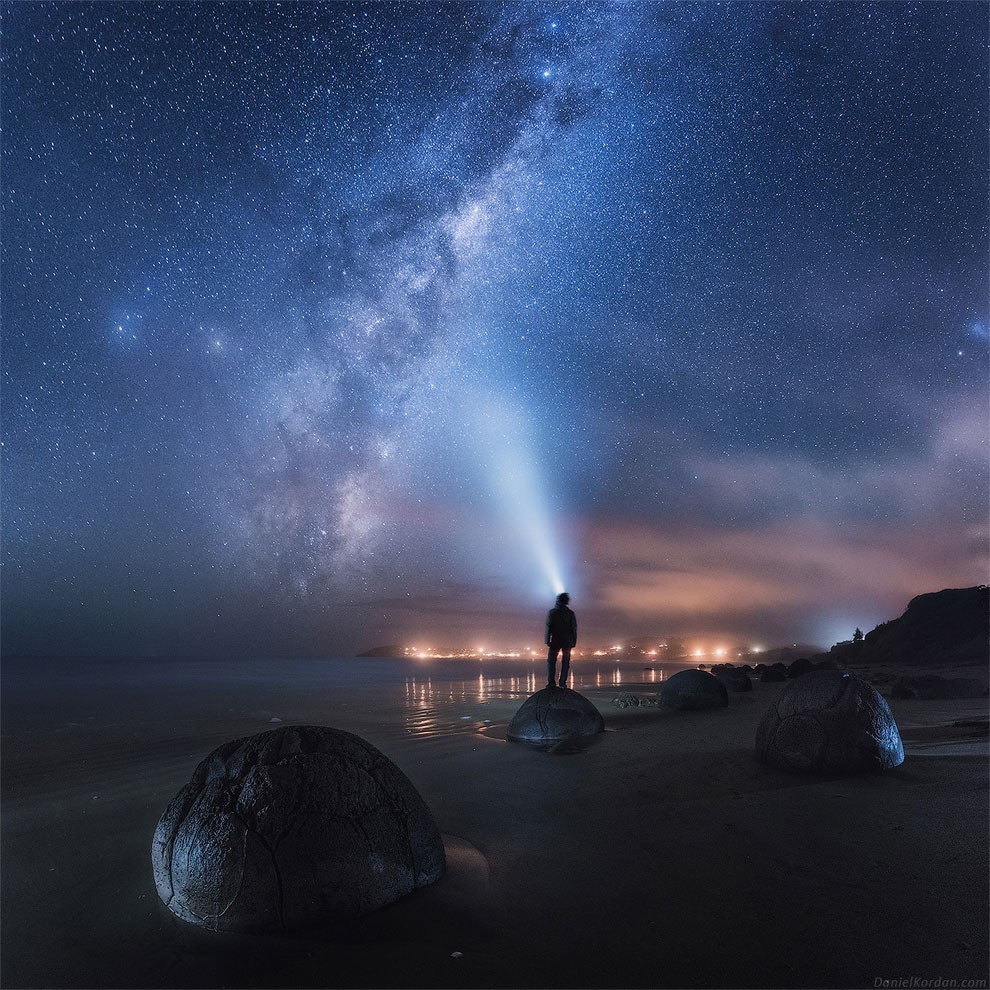 “There is one amazing place in New Zealand called Moeraki boulders. This is a great collection of rounded boulders with perfect shape. At night they look absolutely alien and fantastic! Nikon d810, nikkor 14~24, iso 3200, f/2.8, 30 s, 2 horizontal shots panorama.” 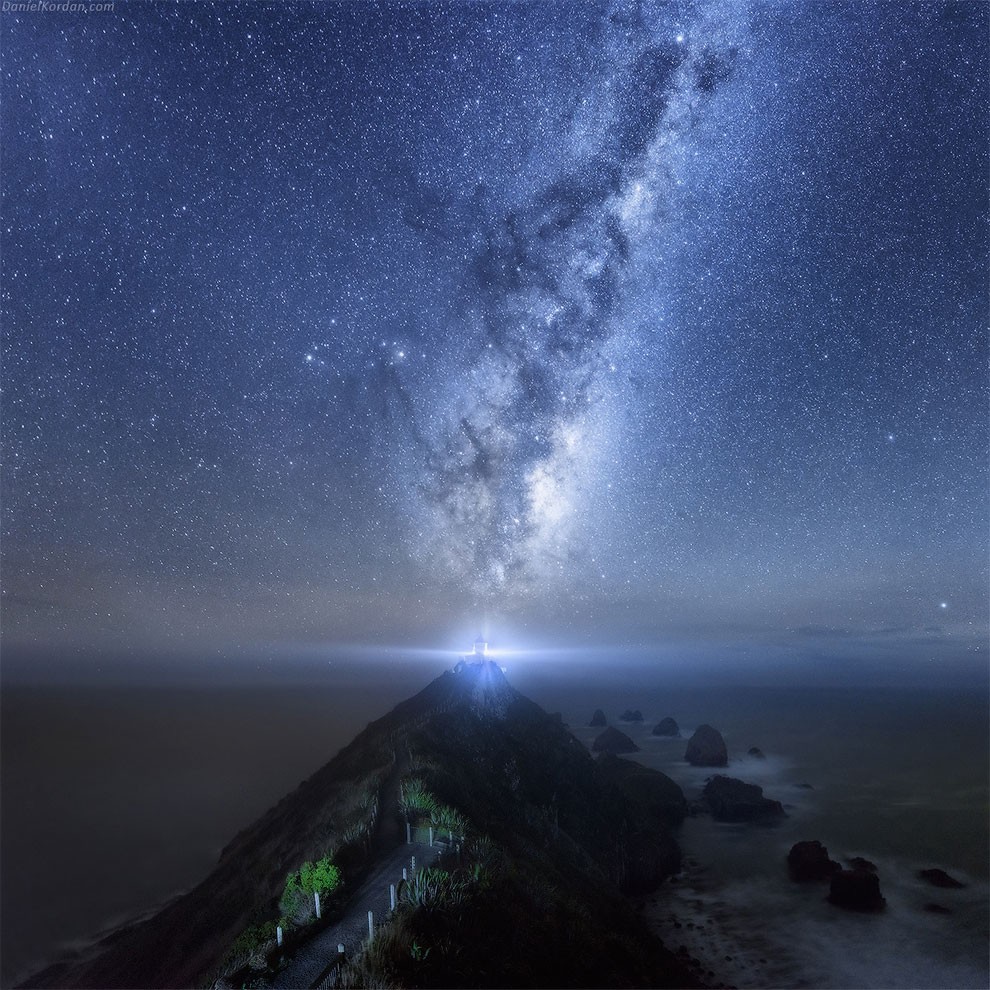 Birth of the Universe

“Last 3 days were amazing. We made a long way from Moeraki boulders through Nugget Point and South shore and Milford sound to Wanaka. A long adventorous journey through stunning New Zeraland landscape. 3 nights we were shooting milky way of South hemisphere, beautiful clear sky, and finally at Milford sound we have fallen in bed, after 3-4 hours of sleep per night. We were granted by 500 mm of rainfall, looking out from our perfect Milford lodge to the water coming from the skies.” 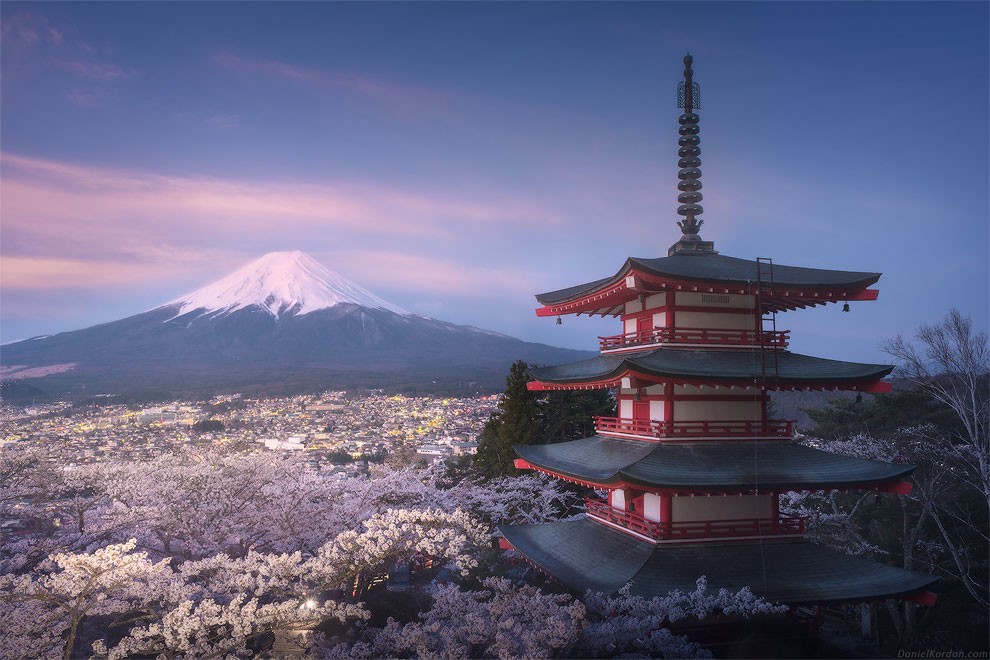 “In the morning we met amazing sunrise over fully-blooming sakura garden under Chureito pagoda with a perfect view towards Mt Fuji. Tomorrow is the last day of my photo-workshop in Japan. I am leaving my group in the airport and flying to New Zealand, to start my South Island workshop.” 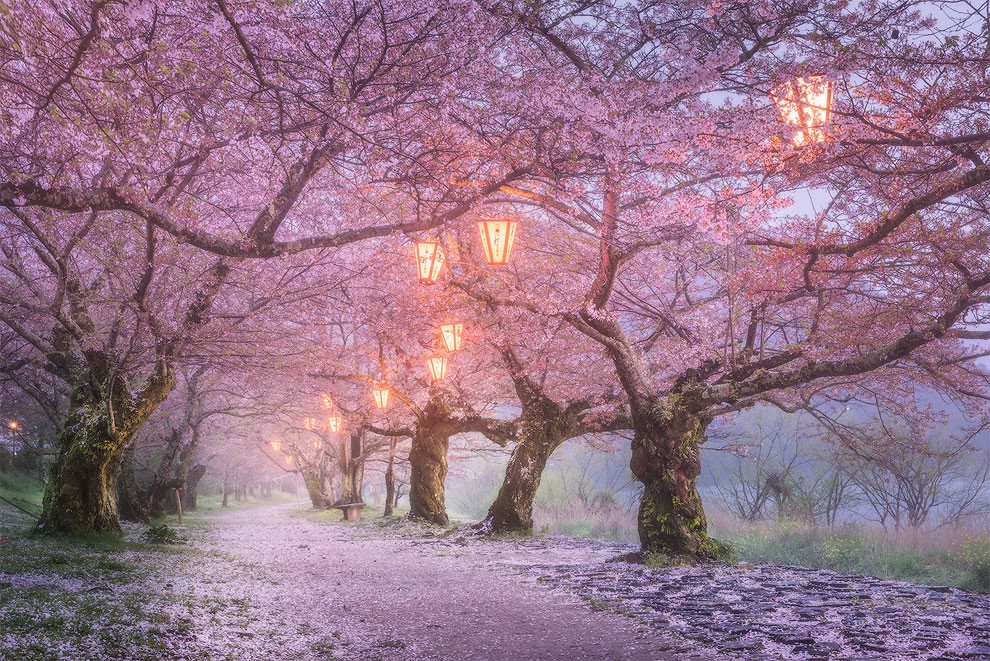 “Its raining in Osaka the whole day. Sakura petals are still flying in the air, but we are recalling the amazing start of our journey in Iwakuni and Miyajima a week ago! Tomorrow we are going to Mt Fuji to catch blossoming in highlands.” 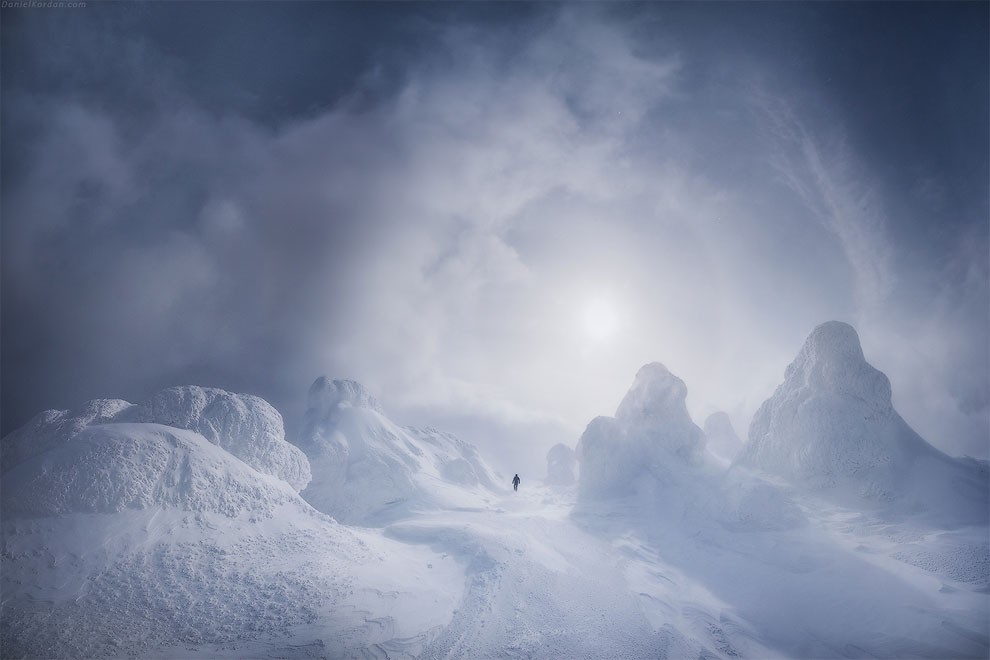 “Otorten mountain, North Ural expedition. This mountain located very near to the Dead Men Mountain Kholotchakhl, where Dyatlov’s group made their last stop…” 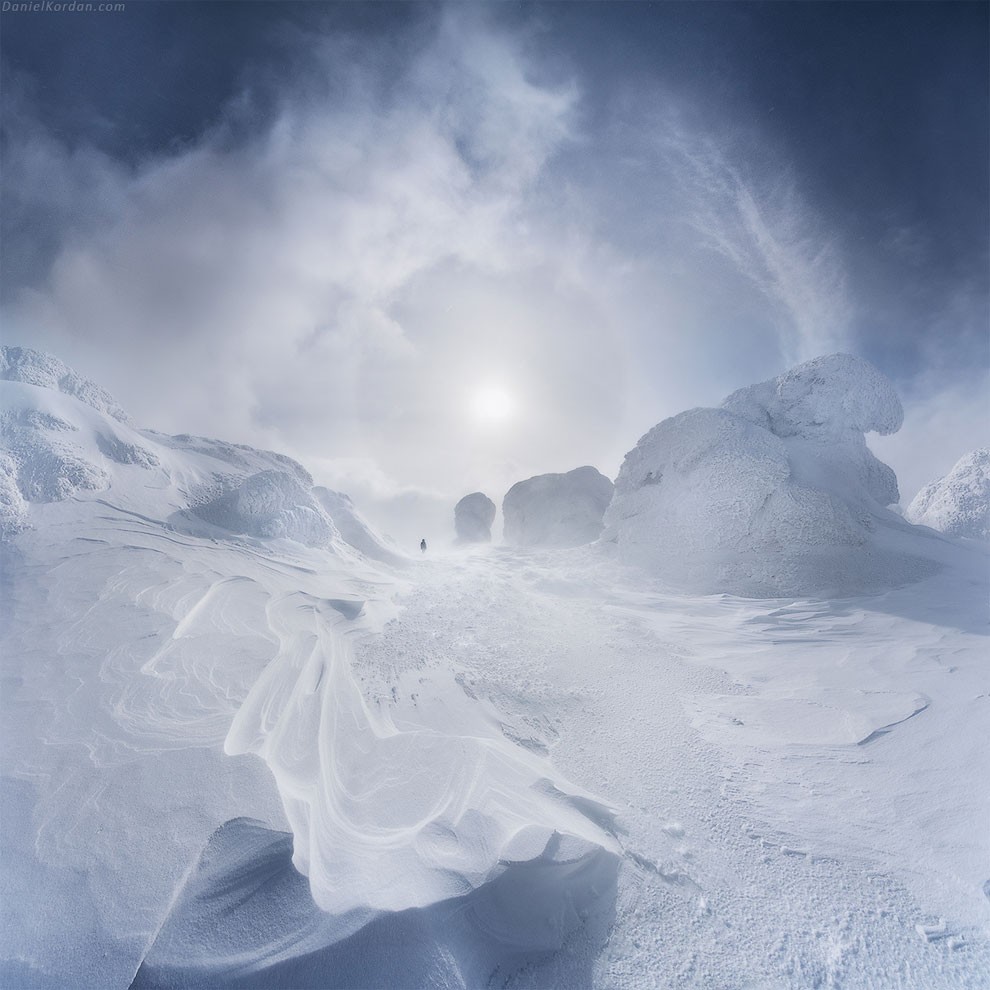 “Otorten mountain, North Ural expedition. We had only 7-10 minutes of pause in snow blizzard to jump out of cover and make several shots of this amazing “snow city”.” 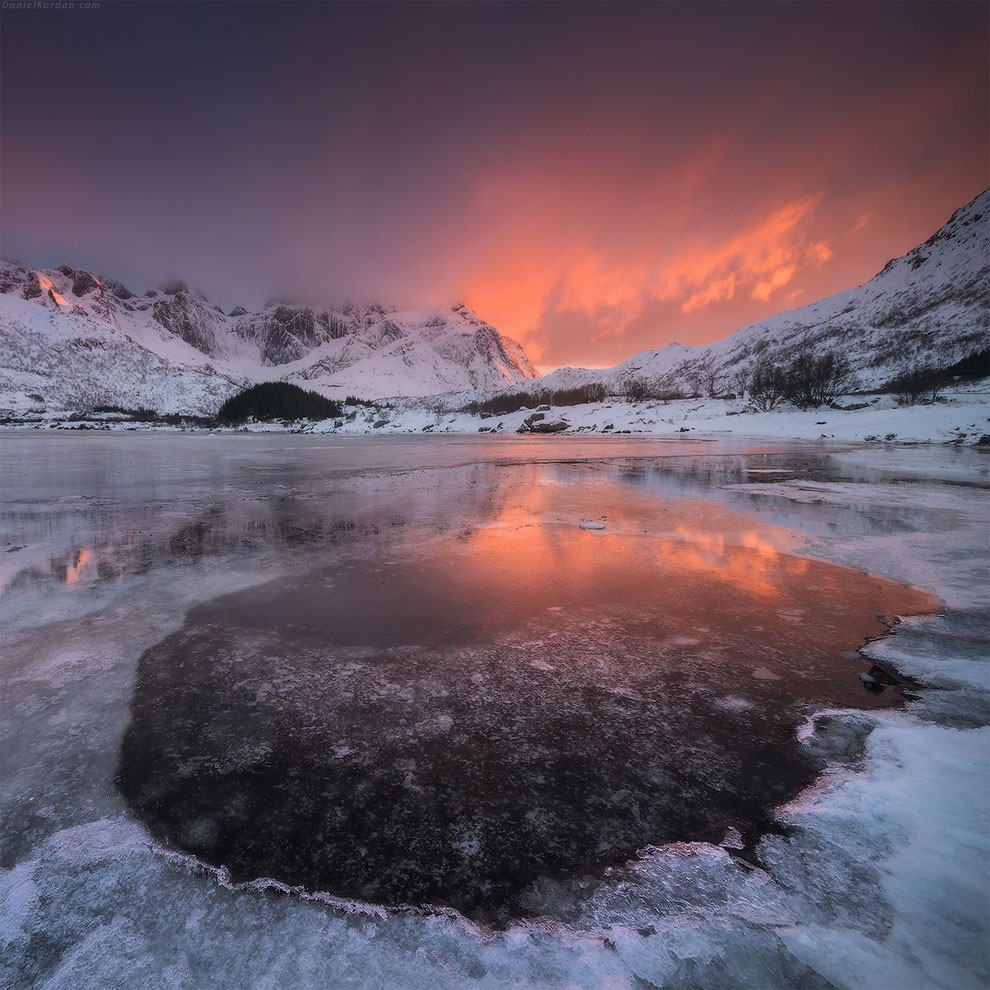 “Lofoten islands, Flakstadpollen. We returned safe back home today from Seven Giants of Ural mountains. A lot of adventures past 2 weeks: temperatures up to -30 C with tents, 150 km of skiing with 35 kg backpack and snow blizzards. But we endured and survived this harsh conditions coming back home safely and healthy.” 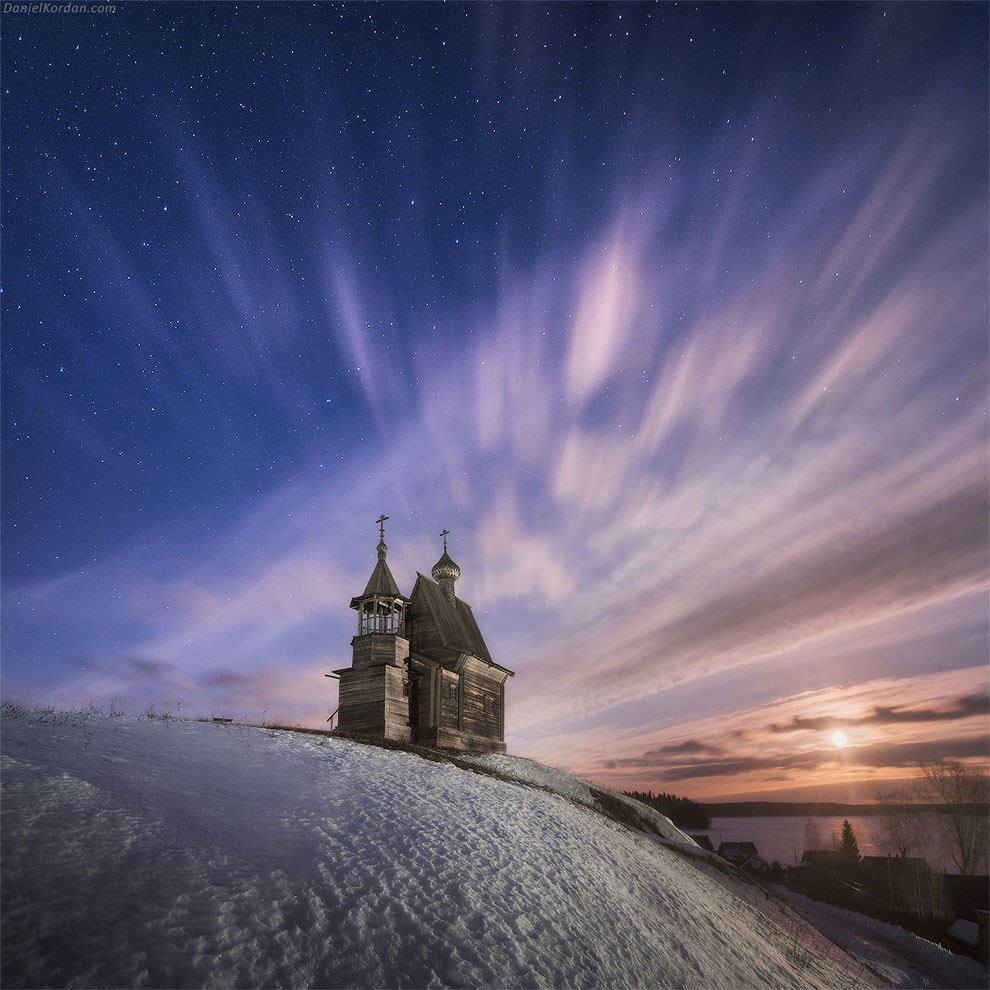 Moonrise over the chapel 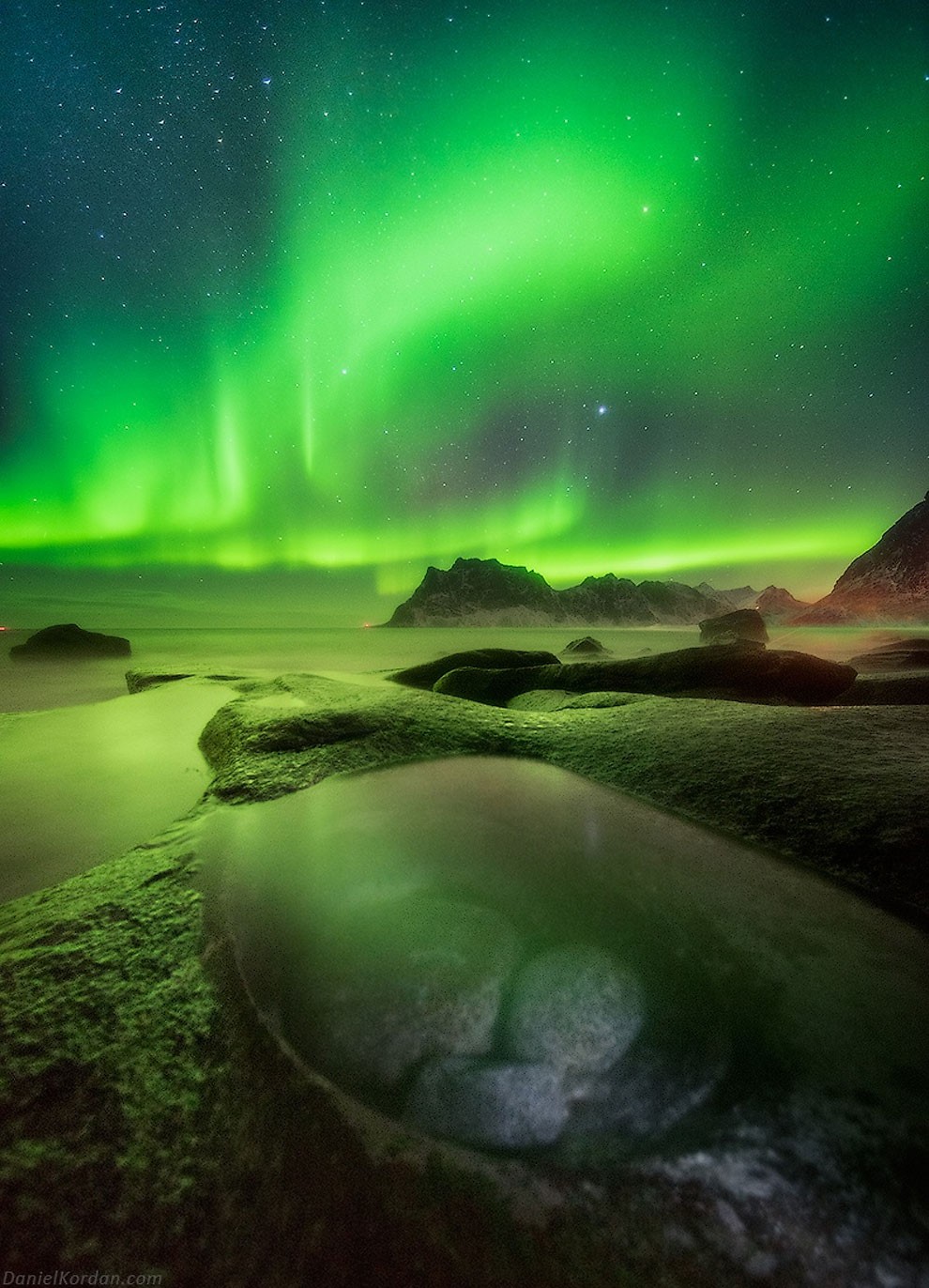 “Amazing aurora was tonight! The sky was set on green fire for almost 2 hours. My second Lofoten photo-workshop group was as lucky as the first one!” 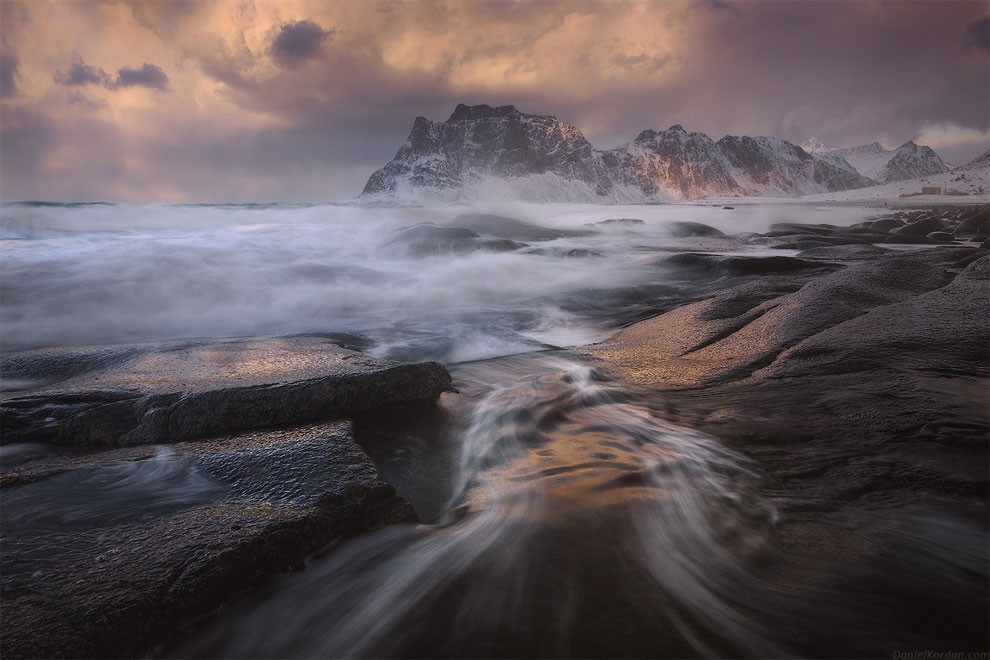 “Uttakleiv beach, yesterday. A perfect snow storm at sunset. The wind speed was up to 25 m/s, severe conditions. We felt minus -1 like -20 at polar circle…” 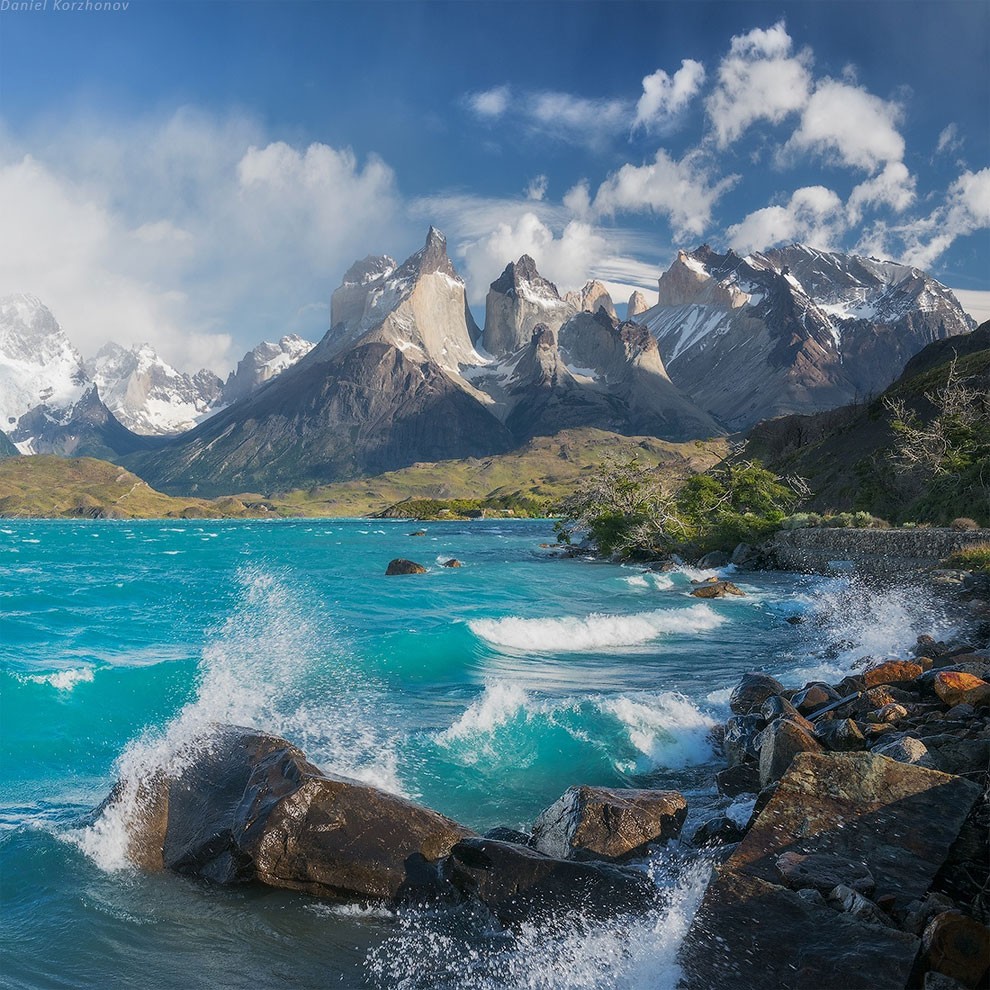 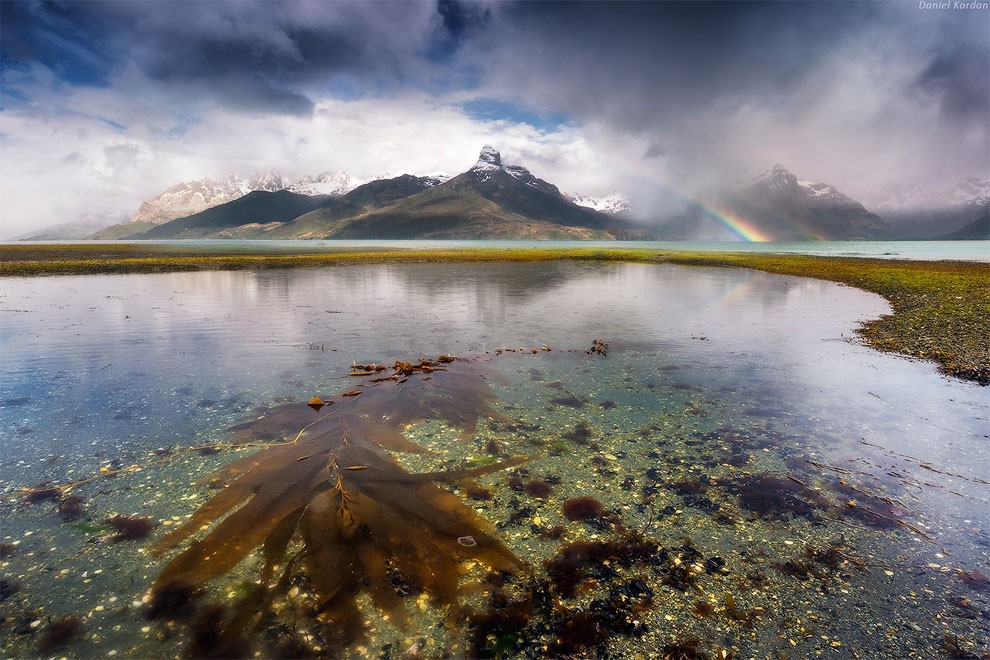 “We have reached Torres del Paine yesterday! For 5 days of our Patagonia expedition we had explored remoted Chilean fjords. This one shot is from Alberto Agostini fjord, completely remote and only reachable by vessel.” 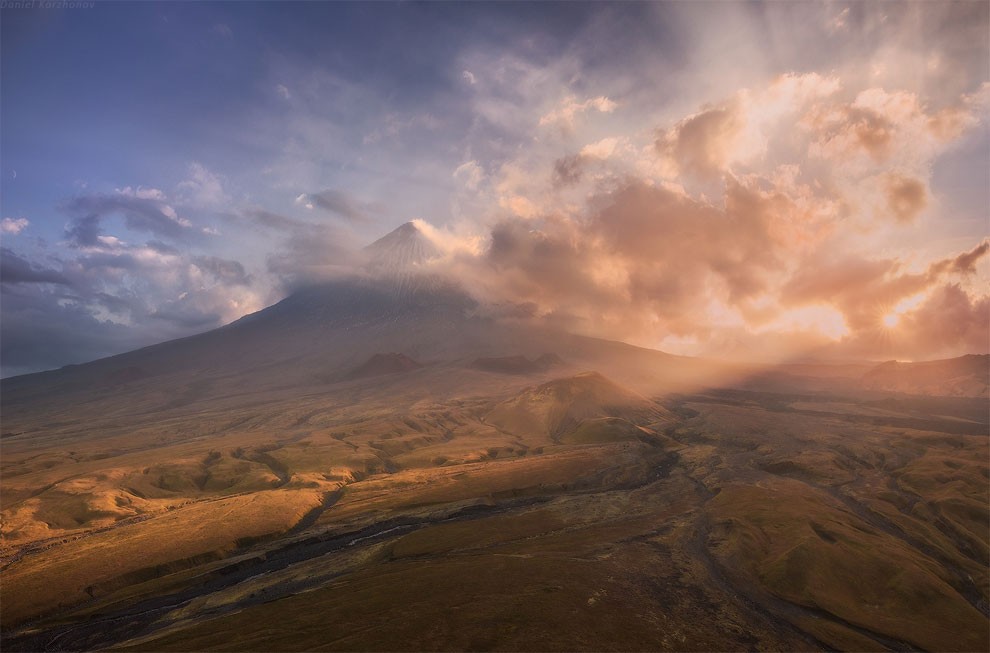 The land of Giants

“Giants valley, Russia, Kamchatka. We climbed onto one of these huge conuses to meet the sunset above Klyuchevskaya volcano. On our return back to tents we noticed a surprise: the huge brown bear headed directly towards our camp! We were lucky brown bear was scared by us as we by him – so he just run away as we shouted loudly on him.” 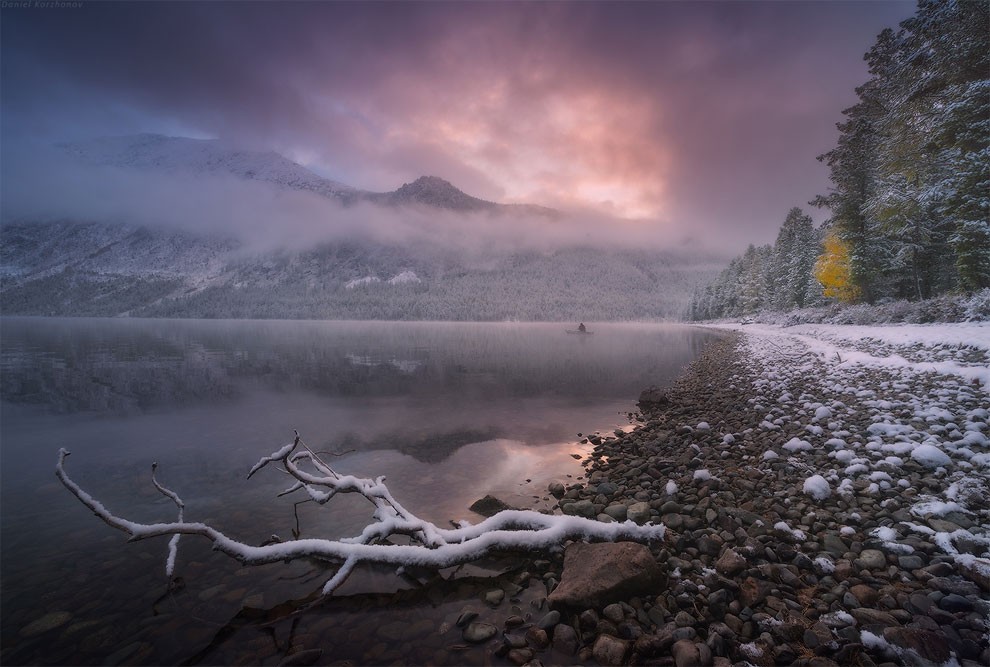 “Altay, Russia. Multinskoye lake. I felt incredibly happy, running like a kid and feeling joy of the first snow in mountains. When it falls with huge soft flakes, the first snow for 3 months, you feel this serenity and freedom far in the land of Golden mountains, Altay. This is remote land between Russia and Mongolia. It is hard to reach so you can find just a few photos and descriptions in the net. This is the sunrise after a night of snowfall, calm and warm. Only 2 hours left to melt this astonishing beauty.” 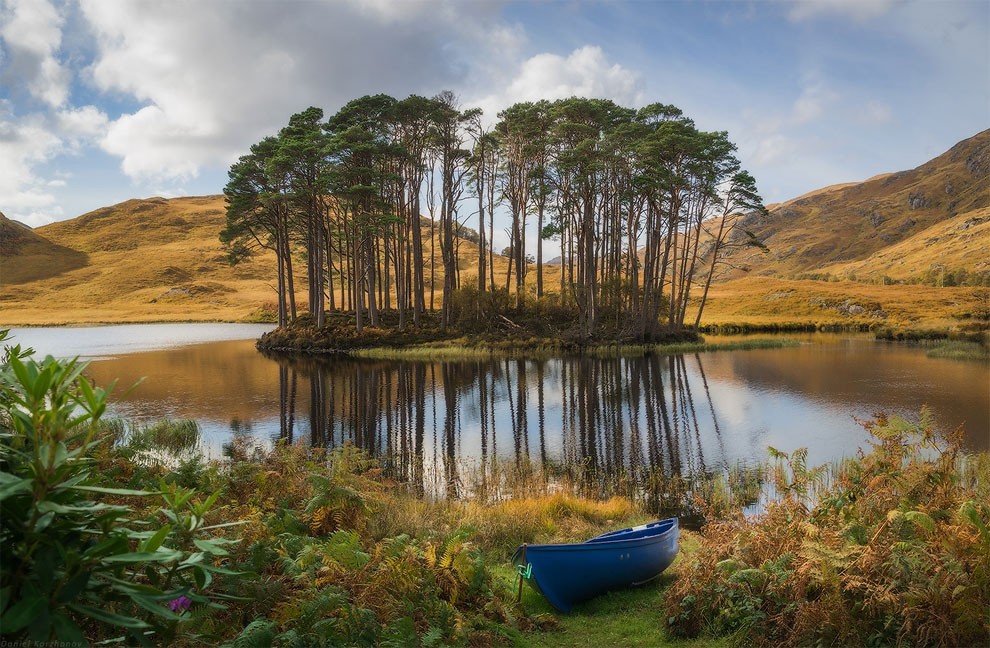 “Scotland, october 2014. Sunny island in Scotland, my October photo workshop. We had a session at Loch Etive and just drove to the back road to turn over to Harry Potter train. Suddenly we noticed this amazing island through the bush.” 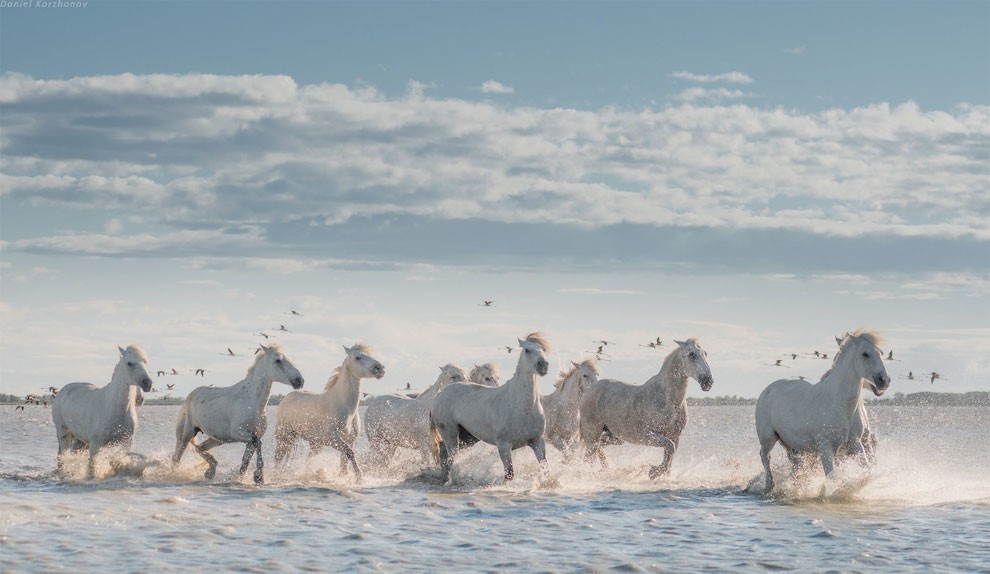 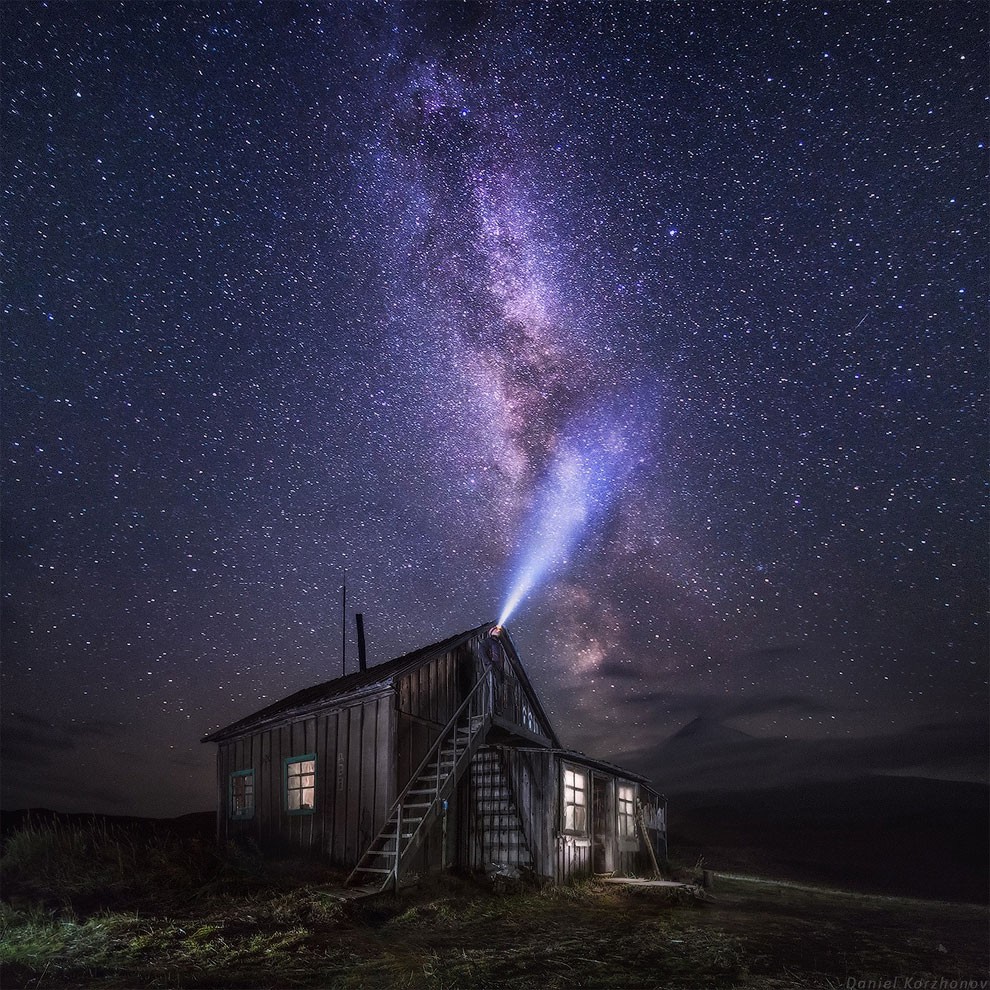 “Kamchatka wild nature expedition, september. We camped here to hide from a huge bear, walking near us all day long.” 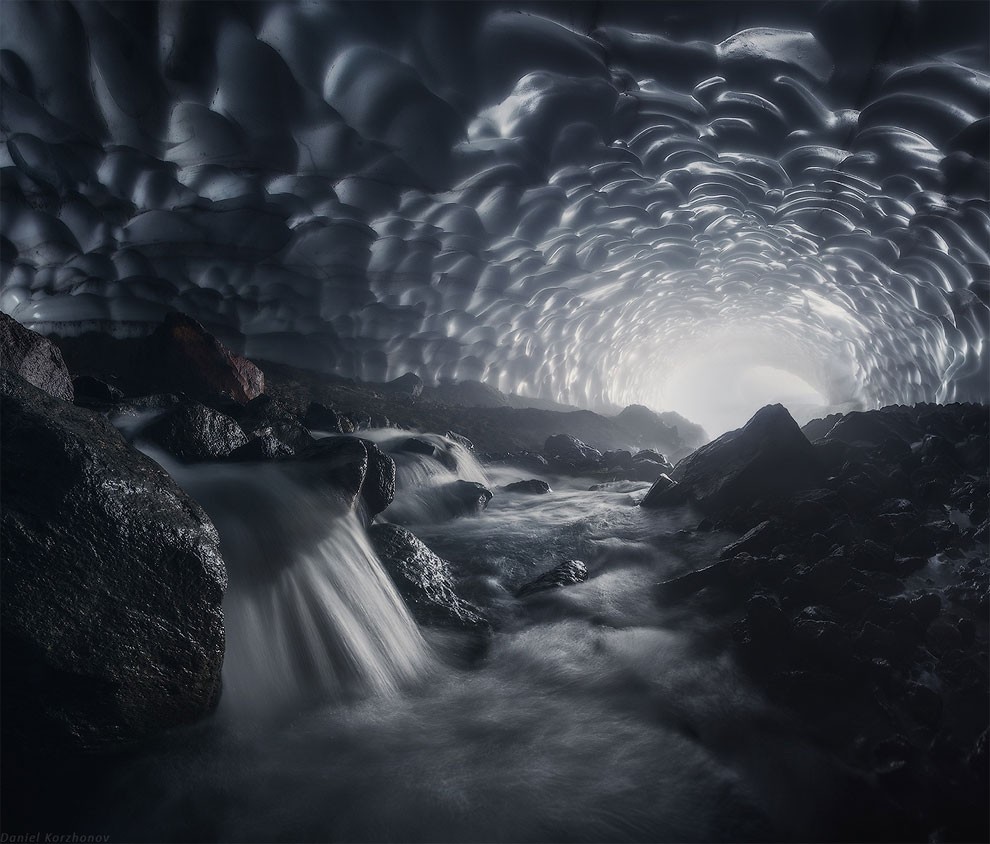 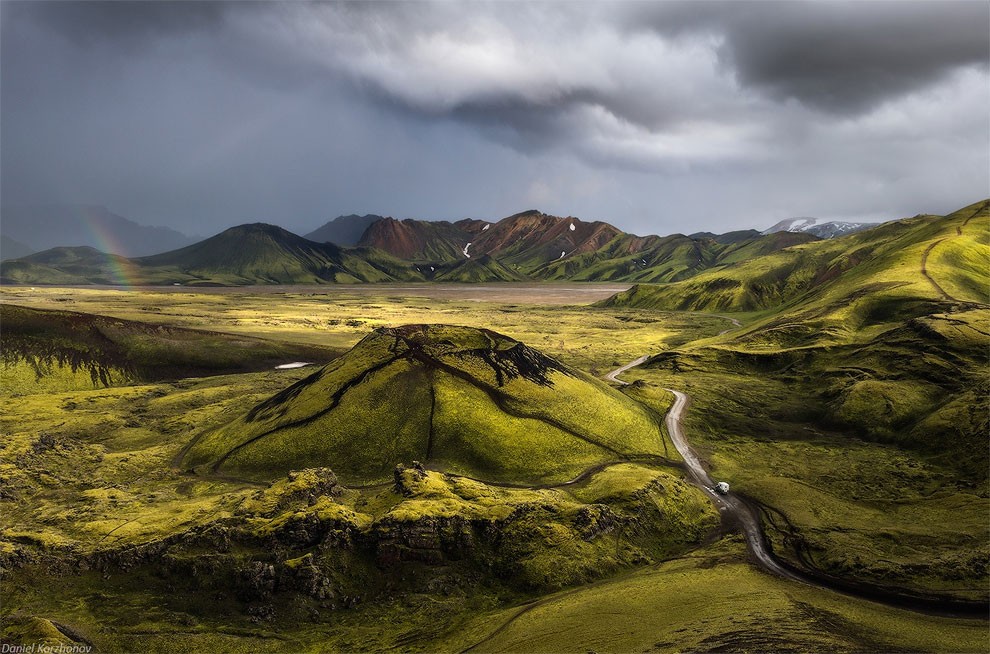 “I’ve just returned home from my photo workshop in Iceland. Amazing adventure for over 18 days. At this place near landmannalaugar we were caught by severe snow storm. After a few minutes the snow just disappeared! I love Iceland for this beautiful moments.” 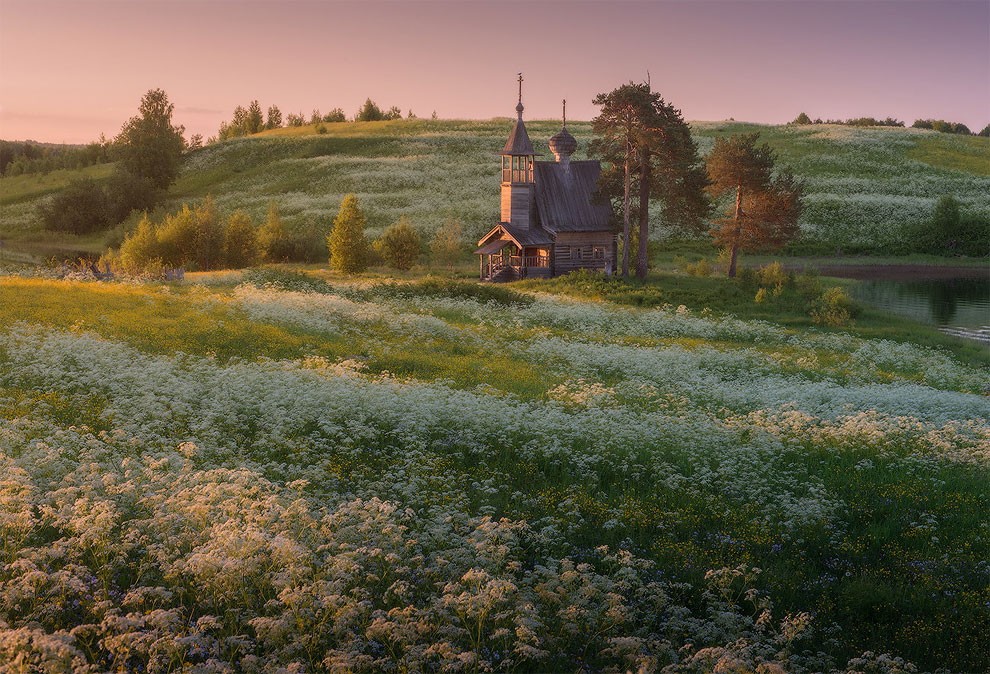 “A few days ago at Kenpzerje national park at Russian North.” 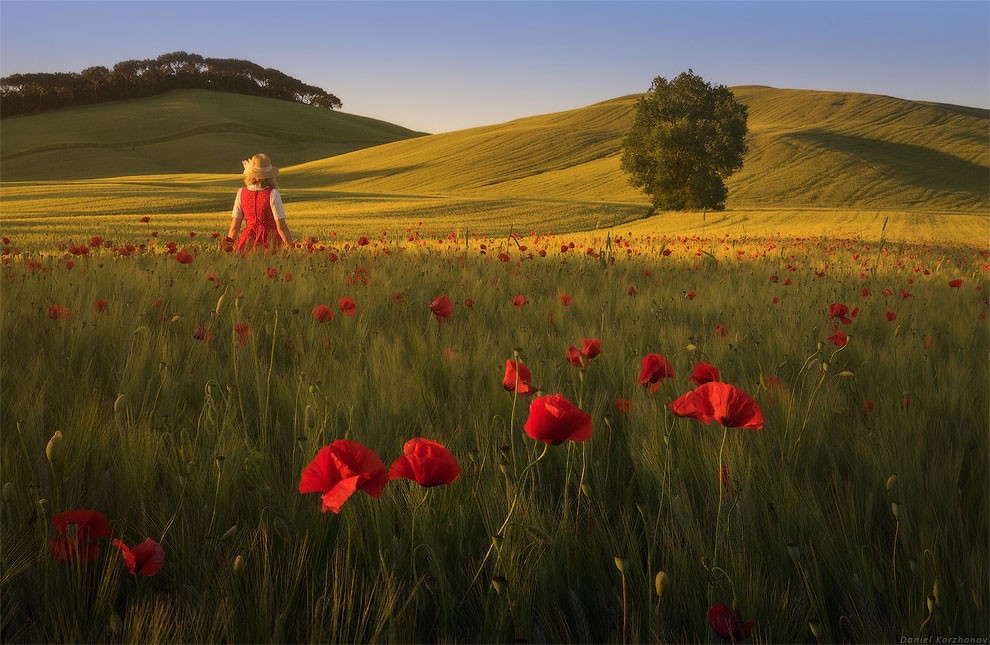 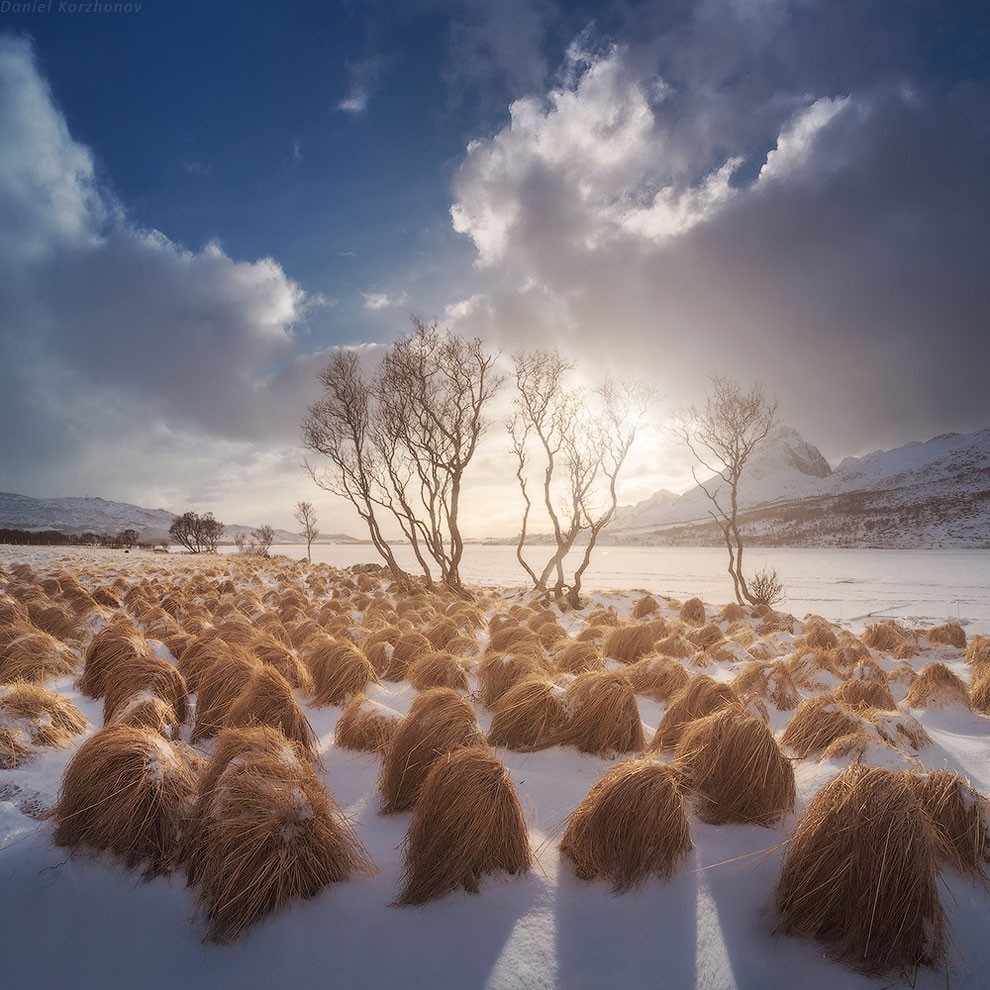 Trolls in the Theater

“Trolls are very educated and intelligent persons. Have you ever met one? If don’t – I advise you to get to Norway ;)”

Horrible Distorted Portraits Of Celebrities As You've Never Seen Them
The Beautiful Pictures of Waves
The International Society of Professional Wedding Photographers Awards
Photographer Jeremy O'Sullivan
Beautiful Portraits Of Women During The Later 19th And Early 20th Centuries
These Photographs Of Tattooed Senior Show That Body Art Looks Beautiful On Everyone
Warm Oscars 2018 Photoshoot By Mark Seliger
Something Unique: The Superb Humorous, Creative And Advertising Photo Works Of Frank Uyttenhove
Photographer Took Stunning Macro Pictures Of Beautiful Dew Drops
Man Develops 120-Year-Old Photos Of Cats Discovered Inside A Time Capsule
Photographer Gets Lost In The Beauty Of Tokyo's Neon Streets At Night
Spectacular Winning Images of The Siena Creative Photo Awards 2021
The Spectacular Winning Photos From Underwater Photographer Of The Year 2019
Holyland
Amazing Winners Of The African Wildlife Foundation Photography Awards
A 78ft 'Coronavirus Ogre Castle' was Burned at Shrovetide in Russia, Here Are The Incredible Photos
To Change People’s Negative Perceptions Of Rats, Photographer Started Picturing Them In A Nice Way
This Greek Man Living in Malta Has Been Posting Photos of His Forehead on Instagram for Six Years
An Alabama Mom Turned Her Baby Girl And Husband Into Terrifyingly Realistic Zombies
Silence/Shapes - Award-winning Smoke Bomb Photos by Filippo Minelli
Dad Transforms His Adorable 4-Month-Old Son Into A Real-Life Elf On The Shelf
The Surfing Trooper
Photographer Emily Lauren Wants To Change The Way We See Female Beauty
Photo of the Day: Airborne
daniel, ethereal, kordan, landscape, photography