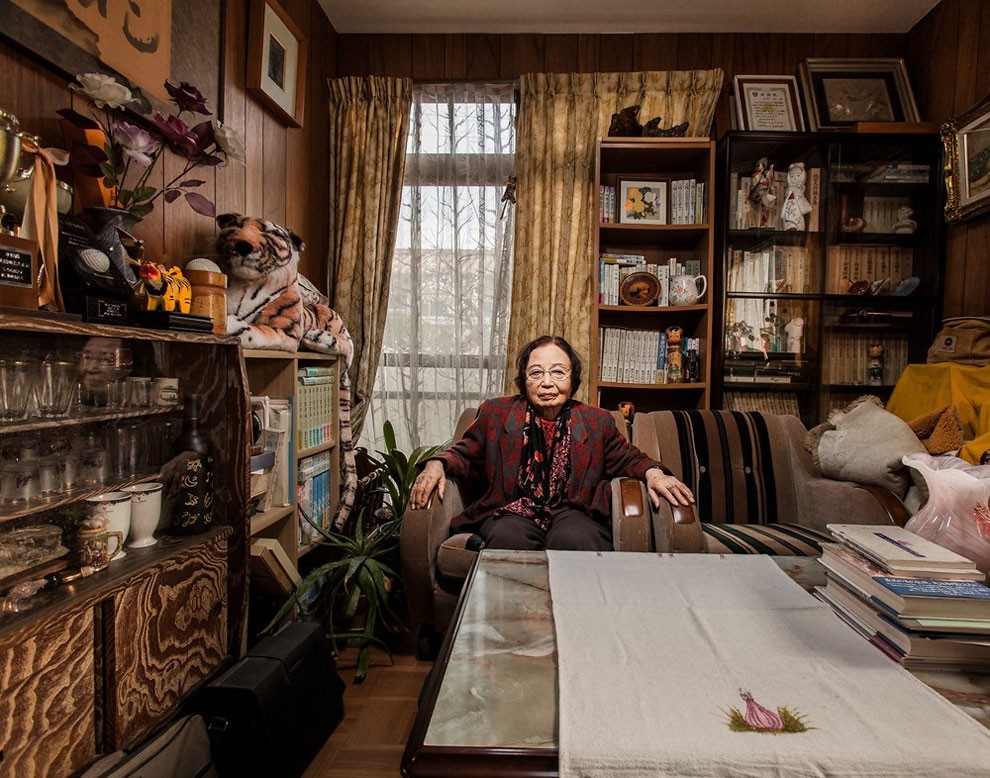 Takeoka Chisaka, Hiroshima, Japan. “One morning in August 1945, I was walking home from the night shift at a factory in Hiroshima. As I reached my door, there was a huge explosion. When I came to, my head was bleeding and I had been blasted 30m away. The atomic bomb had detonated. When I found my mother, her eyes were badly burned. A doctor said they had to come out, but he didn’t have the proper tools so used a knife instead. It was hellish. I became a peace-worker after the war. In the 1960s, at a meeting at the UN, I met one of the people who created the atomic bomb. He apologised”. (Photo and caption by Sasha Maslov) 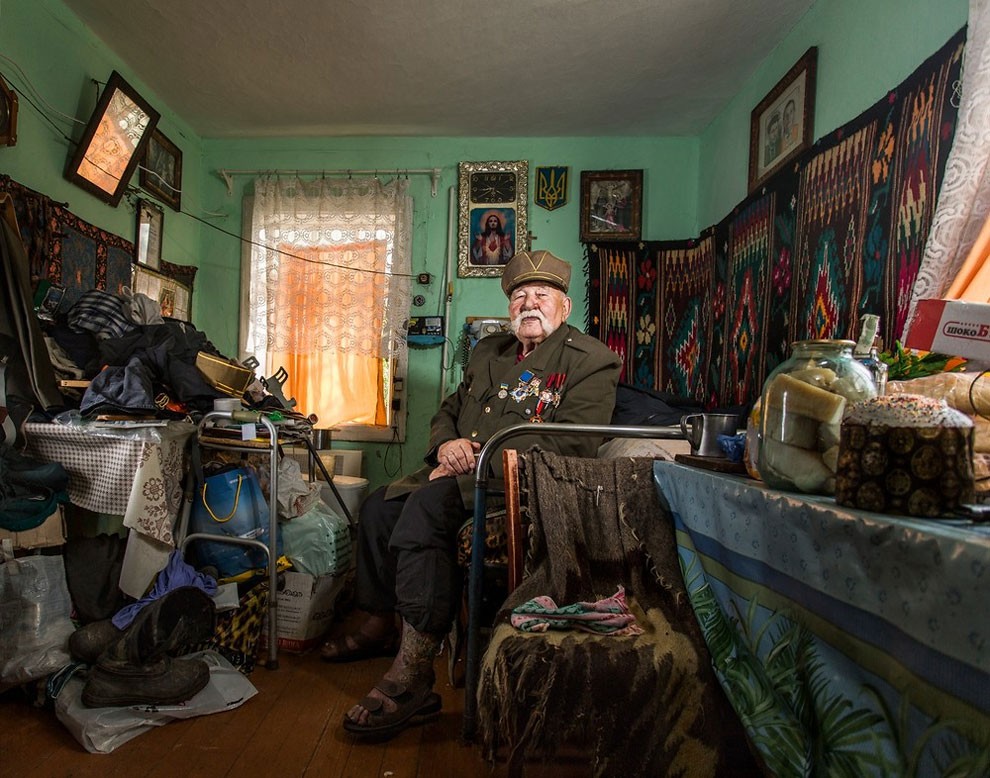 Dmytro Verholjak, Markova, Ukraine. “I was a kid when I joined the Ukrainian Insurgent Army. I was living in a forest with a few other kids when we were busted by the People’s Commissariat for Internal Affairs. They fired at us and I got five bullets in my foot but escaped. Nobody cleaned the wound. After three weeks it was crawling with bugs. Even after the war ended, we carried on fighting the Soviets. I was arrested in 1952 and sent to a camp for 25 years in Mordovia. It was 1980 when I finally got back to Ukraine”. (Photo and caption by Sasha Maslov) 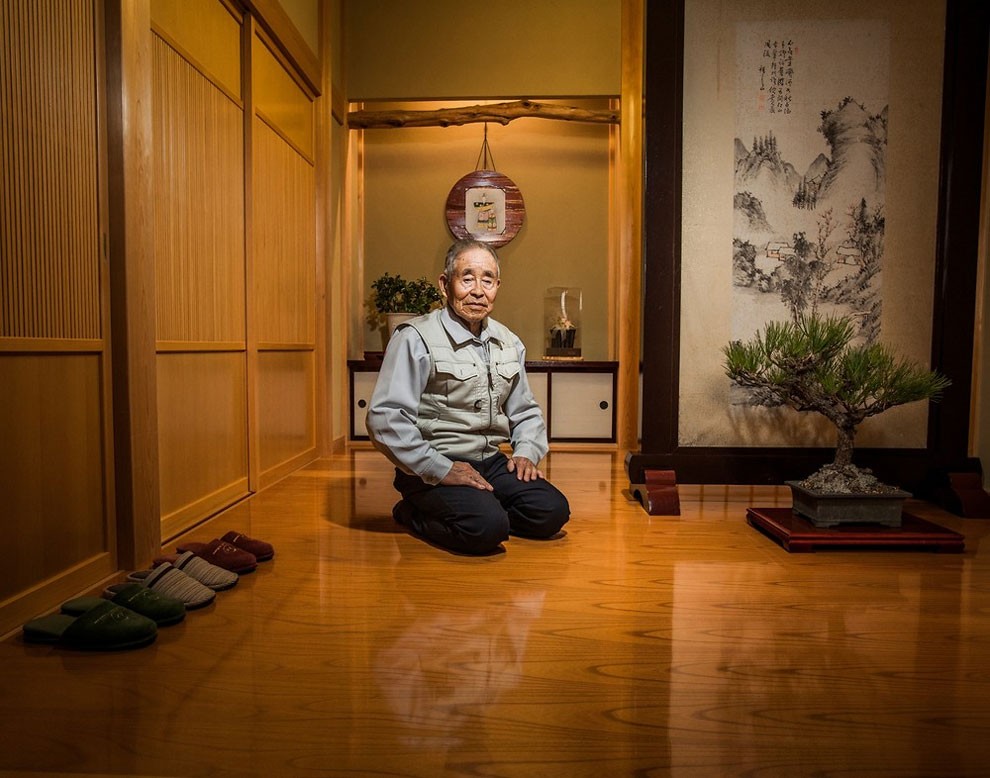 Ichiro Sudai, Takayama, Japan. “I was in a kamikaze squadron, but the war finished before I was deployed. Kamikaze pilots would have farewell parties to drink sake. By the end of the war, we didn’t even have sake, only water. They didn’t return the bones of the kamikaze pilots to their families. So we cut our hair and nails and put them in an envelope with a message for our families. I wasn’t afraid to die. If I did, it would be my destiny as a pilot. Everyone was brainwashed then. After the war, I lived for my hobbies. I wrote poetry, grew flowers and ran a lot. I still have a very strong body”. (Photo and caption by Sasha Maslov) 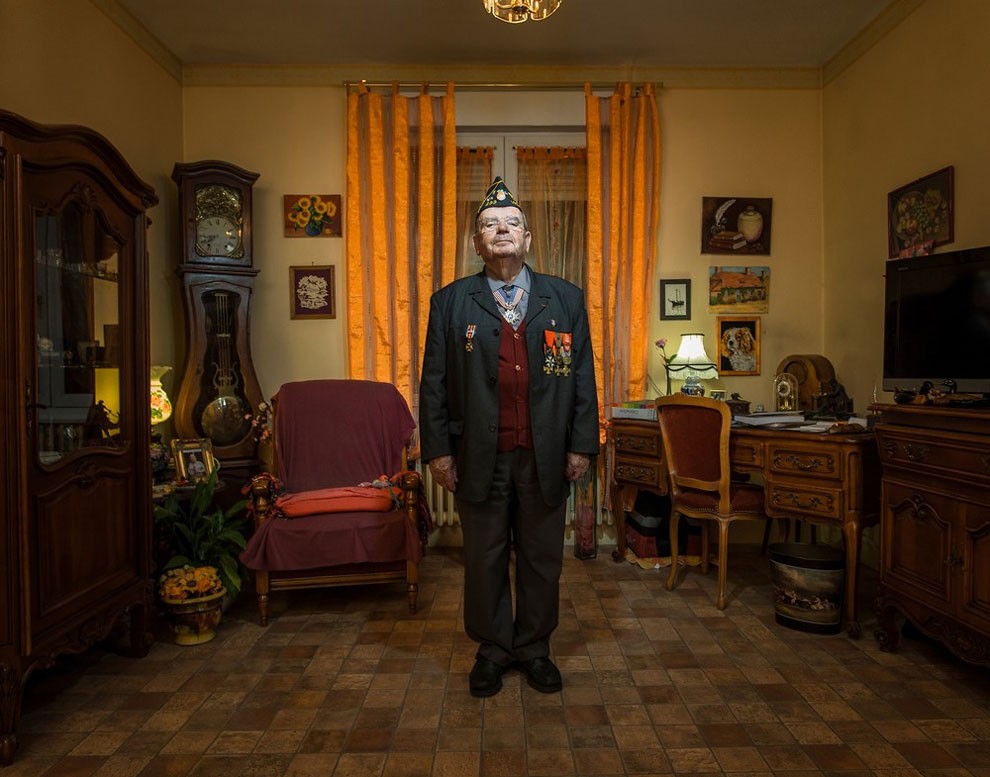 Jean-Jacques Auduc, born in Le Mans, France, 1931. “I was 13 when I joined the resistance. One of my missions came from the British. They had seen a fleet of planes and were worried about their purpose. I went there with my kite and realised the planes were fakes, made of wood. The British retaliated by dropping fake wooden bombs. My parents were sent to concentration camps in 1943. I had to keep moving to hide from the Gestapo. My father managed to return. While my mother was in a camp, she was sold to a lab for experiments; 98% of these women were killed, but she came back. She died aged 41”. (Photo and caption by Sasha Maslov) 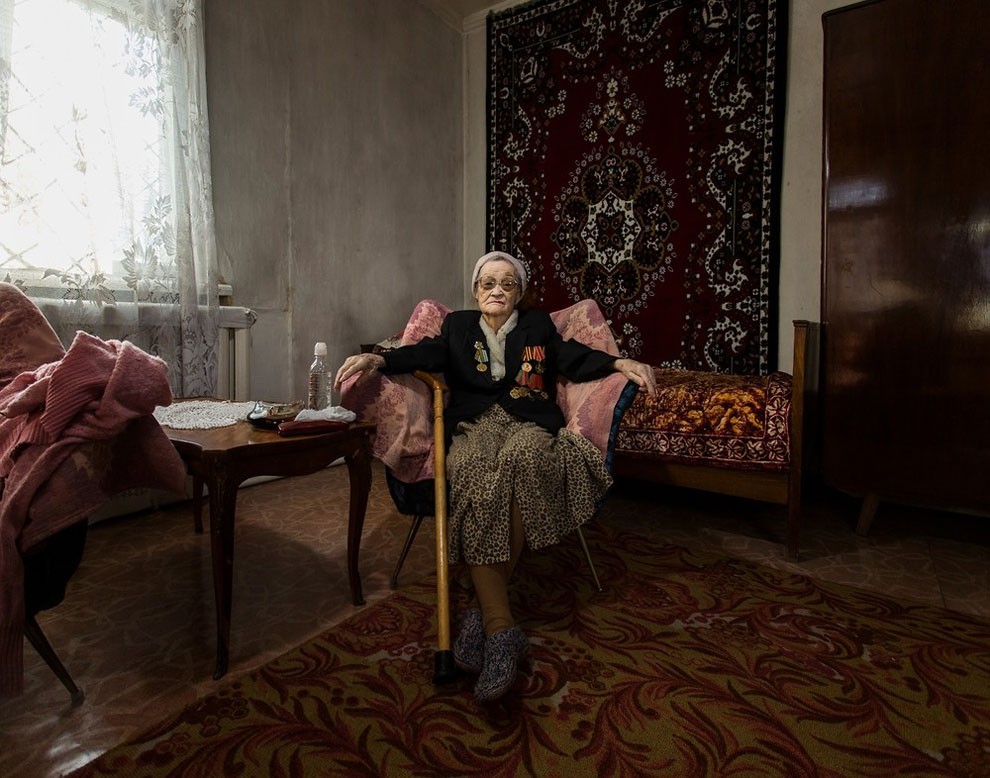 Anna Nho, Almaty, Kazakhstan, born in 1927. “In 1937, lots of Korean families were deported from the USSR. Mine was moved from Vladivostok to Kazakhstan. We lived in tents; it was so cold someone died every day. My uncle couldn’t take it, so he walked to Moscow to see Stalin. They’d met before. We all thought he died, but he made it. He dressed as a homeless man to get into the Kremlin. Finally, he got in – and Stalin remembered him. Stalin sent him to help people grow rice in Caucasus. Later, we saw in the paper that he was looking for us, so we went to join him”. (Photo and caption by Sasha Maslov) 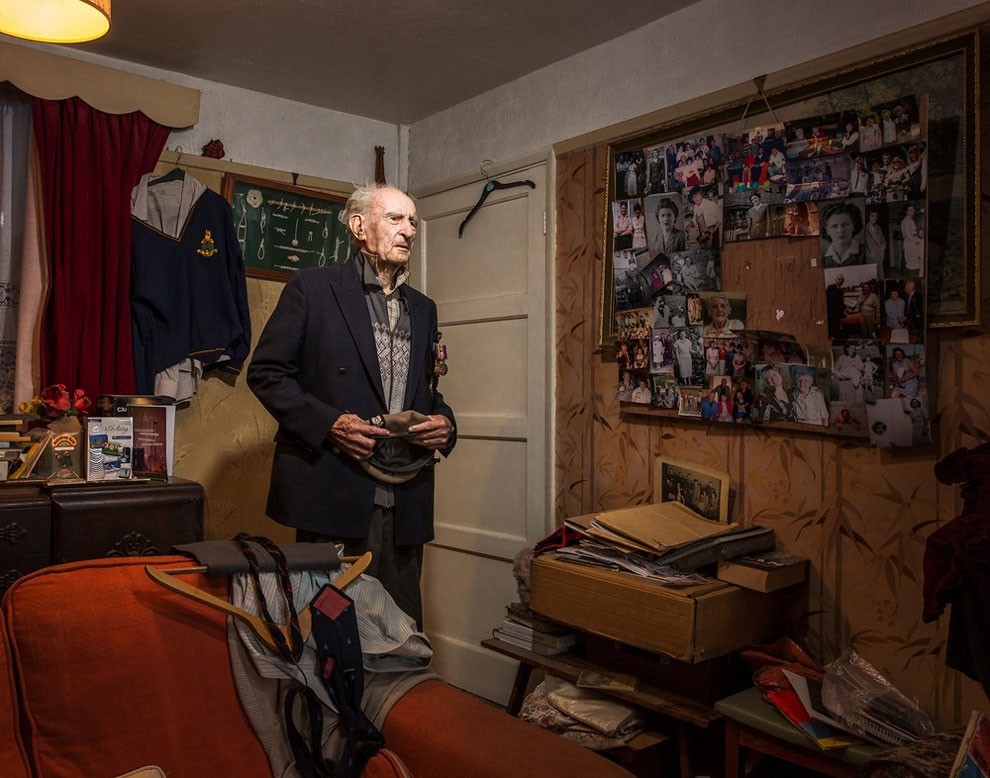 Ken Smith, Portsmouth, England, born in 1922. “I got a bullet in the arm in 1944 when I was a sniper. It’s still there now. We had climbed a mountain on the island of Lusin to blow the place up, but the Germans were waiting and opened fire. I knew I’d been hit; my hand was all sticky. Later, we discovered a German in the bushes. I slung him on my shoulder. Then I heard a bang in my ear – he’d shot himself. I heard his gun drop and thought, “I’m going to have a souvenir”. We paddled back to our ship, and I was bleeding a lot. But then I saw all these badly wounded chaps. I wasn’t a serious case”. (Photo and caption by Sasha Maslov) 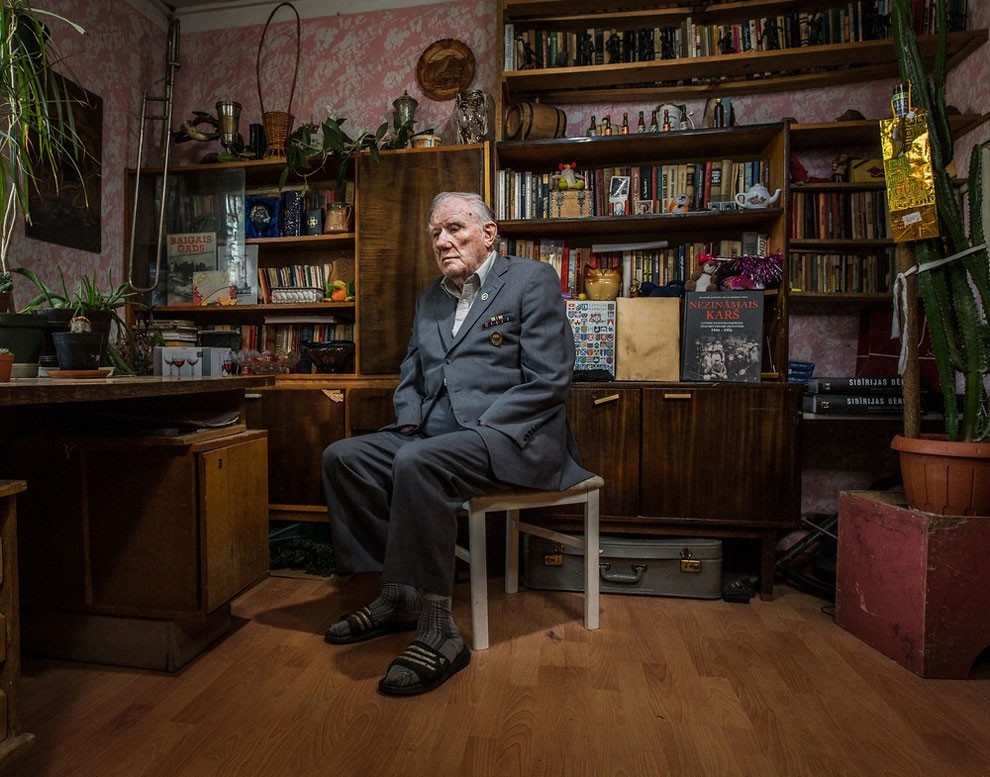 Imants Zeltins, born in Bauska, Latvia, 1922. “When Germany attacked Russia in 1941, we thought they would liberate us from Soviet occupation. By 1944, the Red Army was closing in on us, so I joined up. That September I was injured in a fight that was 28 Soviet tanks against 200 Latvian conscripts. I woke in a German hospital. They had to cut off my right arm. By April 1945, the Americans had come; we were freed. But I ended up in concentration camps in Germany, Poland and Russia. Most of the people around me ended up in Siberia – for decades. I was the only one that didn’t”. (Photo and caption by Sasha Maslov) 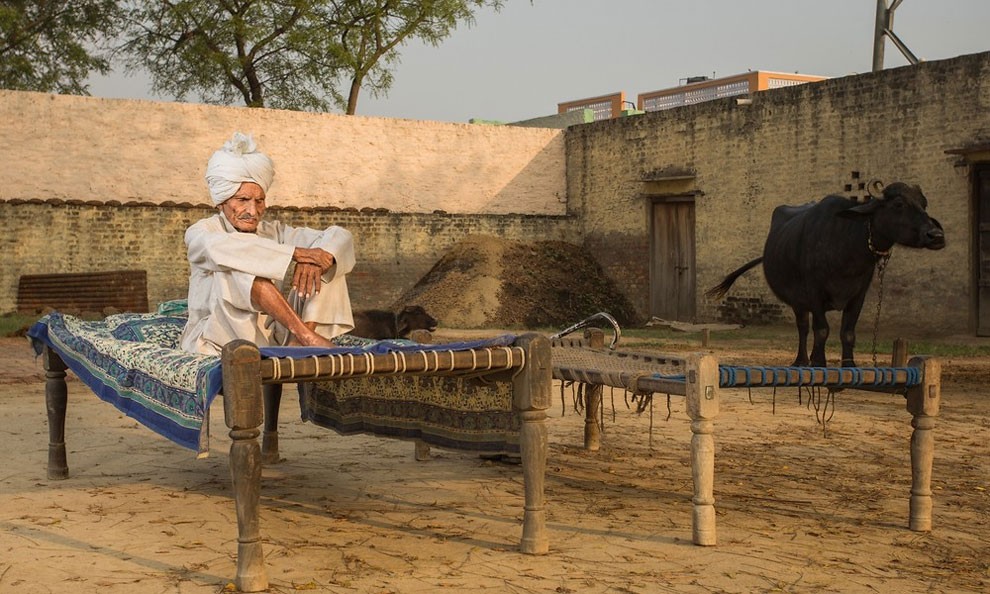 Munshi Ram, born in New Delhi, India, 1921. “I was born in to a family of farmers. In 1939, our entry into the war was declared and I happily volunteered to serve. I was sent to Bareilly for six months’ training. We were taught to be relentless, ready to fight to the death. After that, I went to Europe. Luckily, the Nazis were starting to have difficulties. Our regiment put up a tremendous fight. Time has faded both my memories and my sight, but history shows our side was successful. After I left the army, I rejoined the family business, then my wife and I had two sons and a daughter”. (Photo and caption by Sasha Maslov) 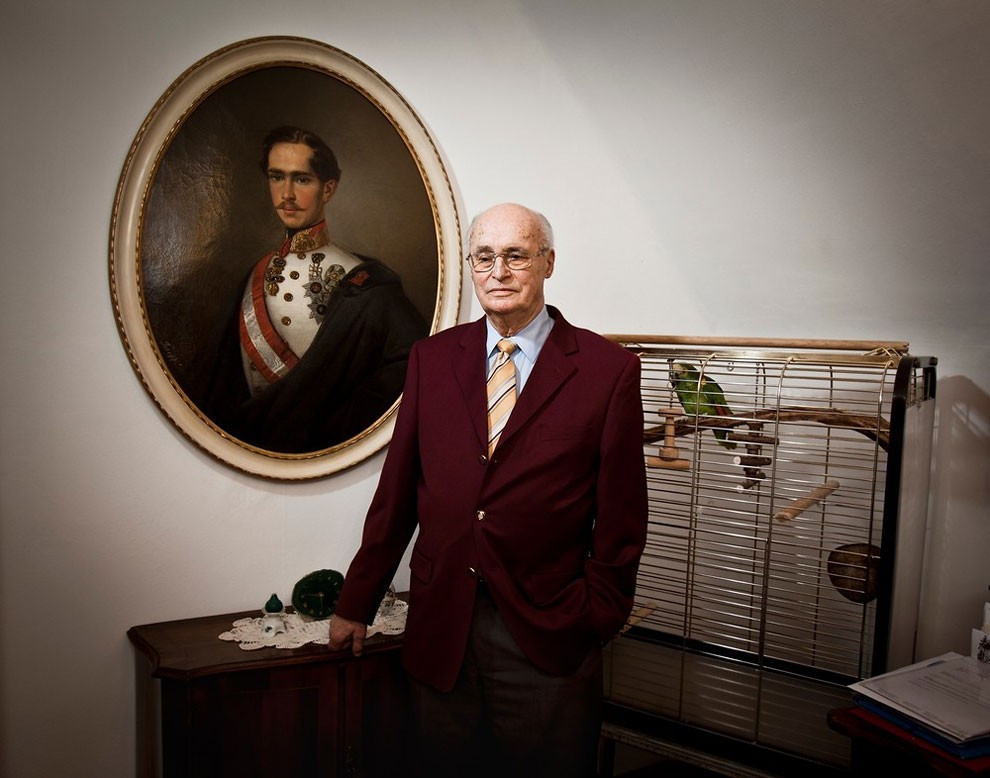 Herbert Killian, born in Korneuburg, Austria, 1926. “For 12 years, I was in the Hitler Youth. I was not fanatical, but I did admire the regime. At 15 I was conscripted. By 1943, I was in the Luftwaffe. By December 1944, I was in a military unit that had to march from Germany to Belgium because all the means of transport had been destroyed. We were starving. We spent our whole journey hunting deer to feed the soldiers. We had to sew our own winter clothes out of curtains and cushions. I am so lucky to have survived”. (Photo and caption by Sasha Maslov) 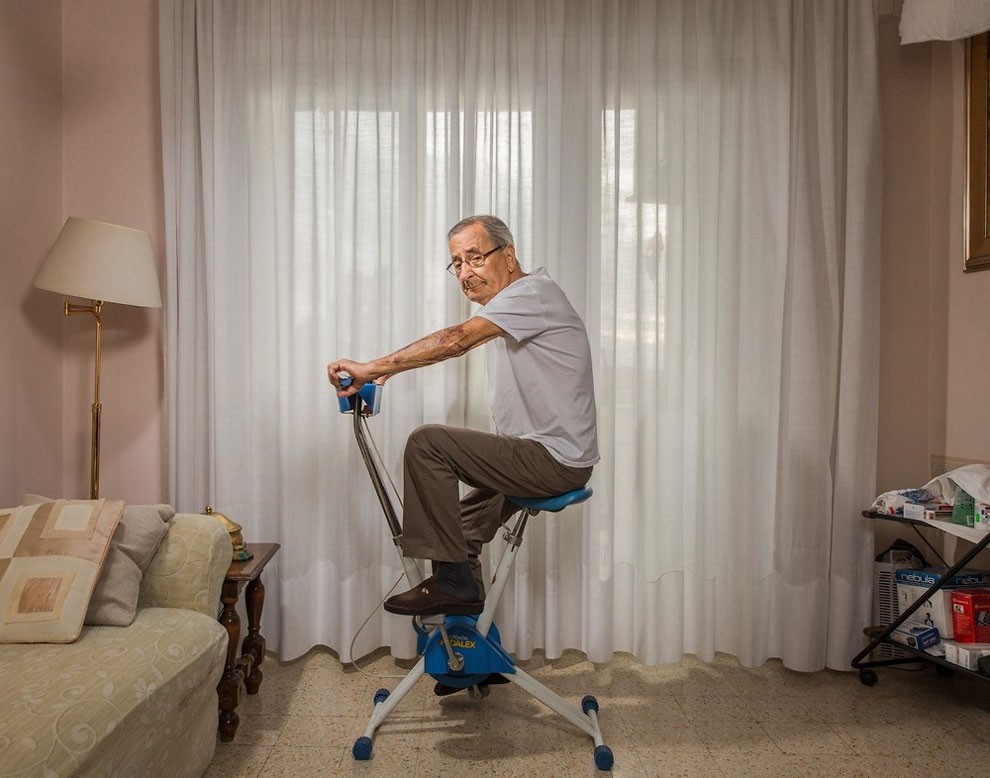 Nicola Struzzi, born in Rome, Italy, 1923. “I was a tram ticket collector in San Lorenzo when I was called up in 1942. I did parachute training then got transferred to Tunisia. Our aircraft came under attack and crashlanded before we got there. We were captured by Allied soldiers. After that, I was moved around prison camps. In a camp in Casablanca, I escaped and was found hiding in a mail plane bound for Italy. I was tortured with electric shock. I made it home by hiding in a freight ship. Astonishingly, my family never gave up hope”. (Photo and caption by Sasha Maslov) 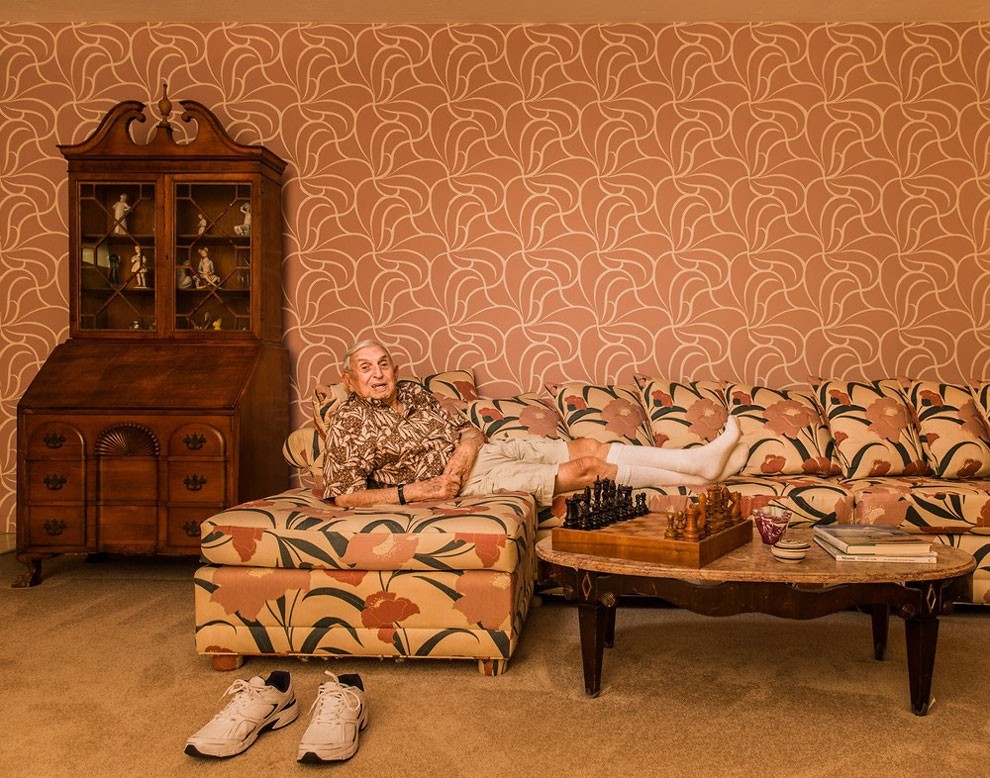 Jack J. Diamond, Miami, US. “I got captured and the US army sent a telegram to my home stating that I’d gone missing in action in Germany. It was received by my sister, who was 13, and she did not want to upset my mother, who was already a widow, so she kept it to herself. My mother only found out when the army sent another telegram saying I’d become a prisoner of war. I was freed by the Russians in May 1945 and shipped back to Miami. But when I went round to my mother’s, she was out – visiting relatives in New York”. (Photo and caption by Sasha Maslov) 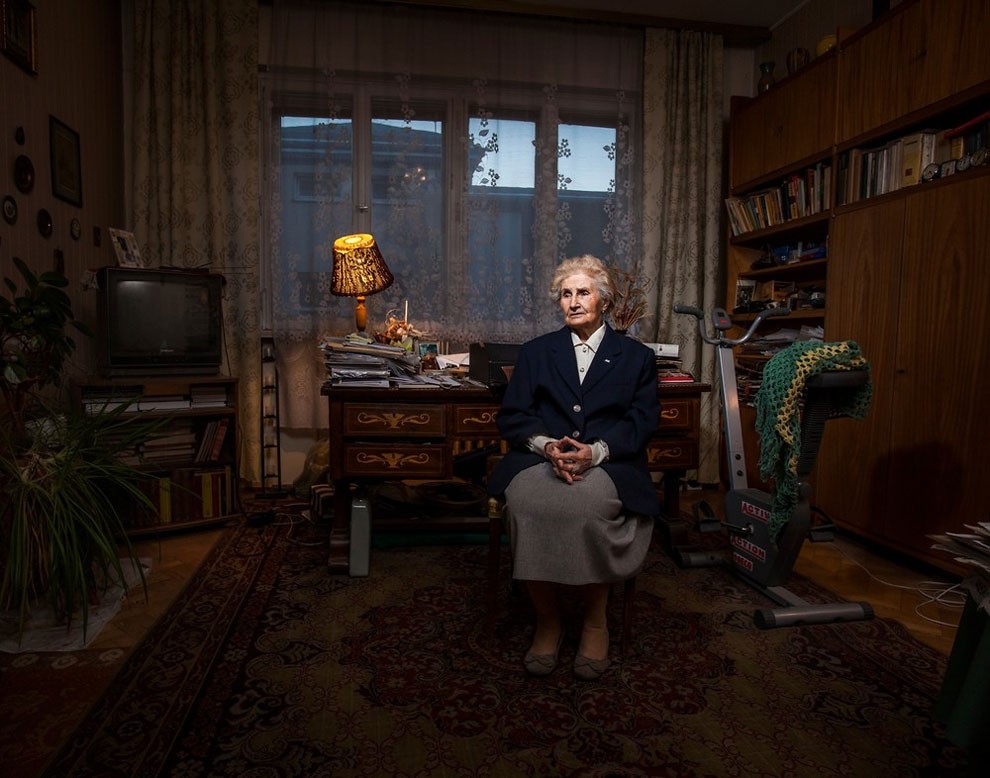 Ursula Hoffmann, born in Poznan, Poland, 1922. “When the war started, I was part of the Związek Harcerstwa Polskiego (Polish Scouts). We soon integrated into the Gray Ranks – the resistance. We moved our HQ into the same building as Arthur Karl Greiser, who was overseeing the German occupation of Poland. We were so brave back then. In 1940, we began reporting to Armia Krajowa, the primary resistance force. We did mail deliveries and sabotage. We were reckless and some of us were caught and killed. But some, like myself, were lucky to make it. A few even came to my 90th birthday party”. (Photo and caption by Sasha Maslov) 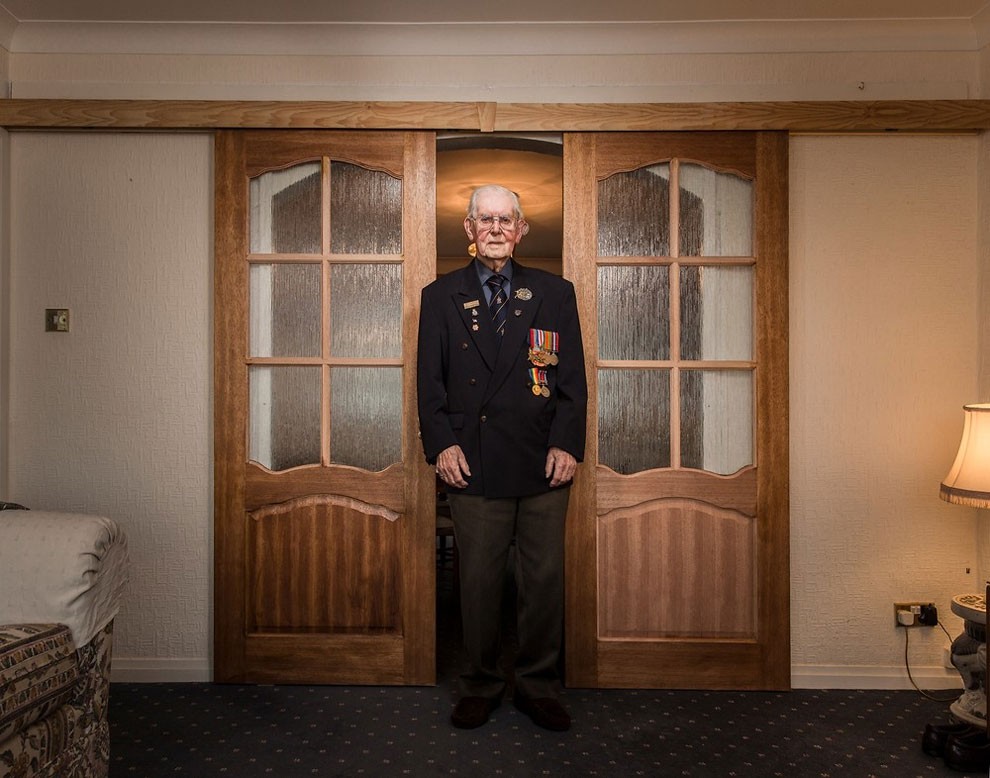 Alistair Cormack, born in Aberdeen, Scotland, 1921. “My parents had a hair saloon, and were both hairdressers. My father died when I was 11, so it was hard growing up until I joined the RAF in 1940. By then, the war had begun and Churchill suggested Britain have a defence of our own and leave professional soldiers to do their jobs, rather than hang around in the air force. So there were a lot of new volunteer RAF regiments, and I was in one of them. We all wanted to join the Scottish regiment, but we weren’t allowed to do that so we had to make our own way”. (Photo and caption by Sasha Maslov) 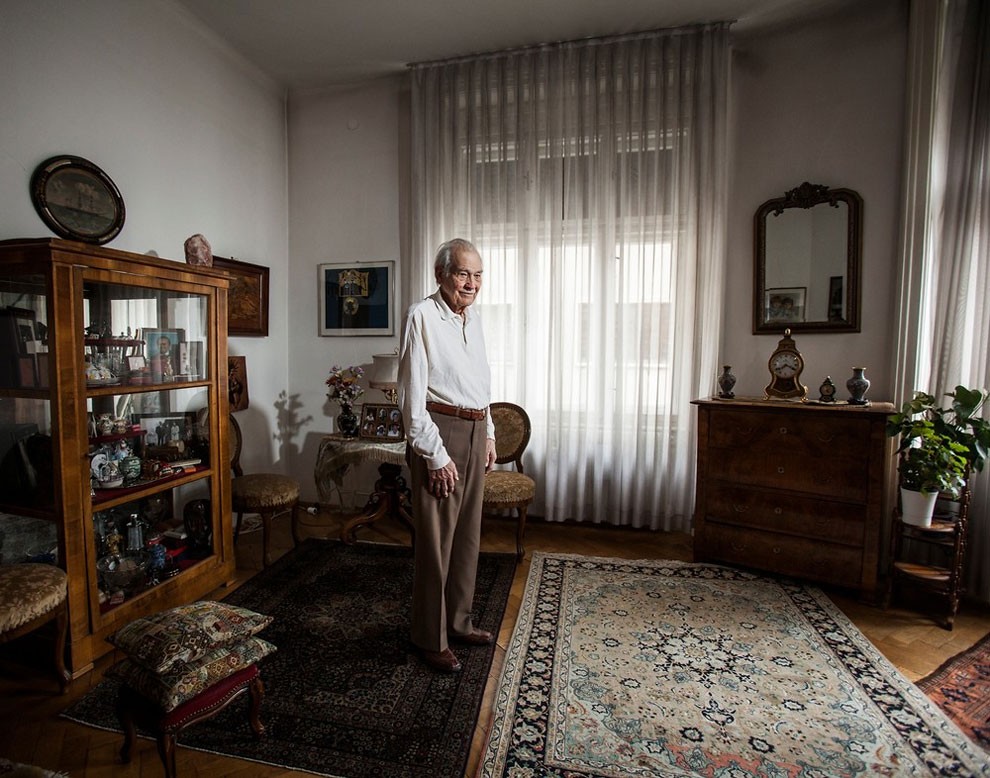 Marko Vruhnec, born in Ljubljana, Slovenia, 1922. “In 1940, the Italians occupied, then the Germans and Hungarians arrived. In 1941, my father was sentenced to 30 years in prison. My mother was sent to a concentration camp. I was taken to Italy and imprisoned. Soon after that I joined the Slovenian partisans with my sister. My father escaped from prison; we were reunited in 1945. After the war, I returned to Ljubljana and searched for my girlfriend; we married immediately. She had also been imprisoned and tortured. Five days before the war ended, I learned my sister had been killed”. (Photo and caption by Sasha Maslov) 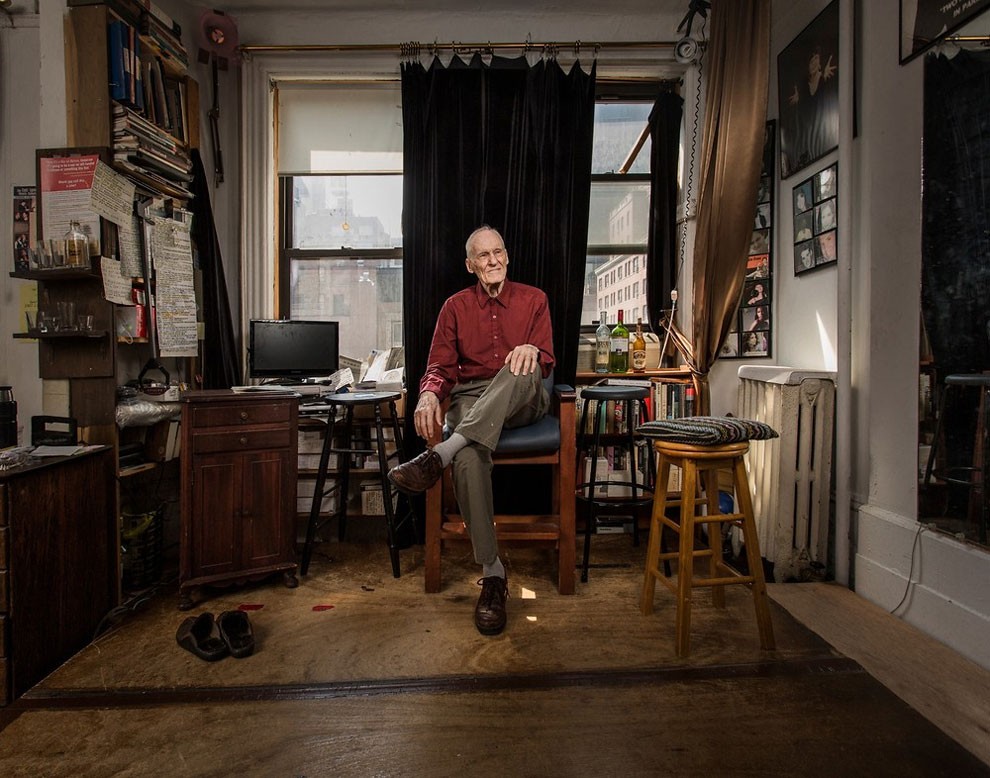 Stuart Hodes, born in New York City, US, 1924. “I remember Pearl Harbor very well. My brother and I were in the kitchen, and we jumped up and down in excitement. I wanted to be a pilot so I joined up aged 17. I almost missed the war; when I got to Italy, we were two months from the end. It was great to come home, see my folks and go back to college. Long story short I became a dancer. I signed up for a month of lessons with Martha Graham. I stayed a dancer most of my life. Until I was 85. When you fly, you’re magically taken away from the everyday world. When you dance, the same thing happens”. (Photo and caption by Sasha Maslov)