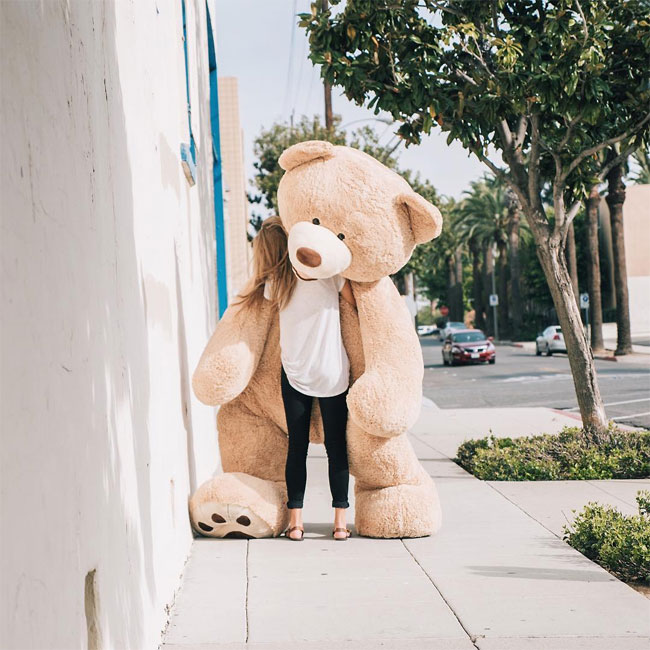 “We adventure a lot,” Schmutz said. “We hike and go anywhere on the weekends. Once we got the bear we decided we would try to figure out a place where we can go adventure, but also somewhere we could bring the bear.”

Findlay originally purchased the bear from Costco as a gift for his girlfriend, Schmutz. He then had the idea of creating an Instagram account when he realized the potential it had, since many were drawn to the bear’s massive size and warm smile.

“I don’t think anyone has not been surprised when they see how big (the bear) is, especially when you see him in person,” she added. “It’s crazy.”

Both Findlay and Schmutz shoot and model for their account, which they say has become a fun activity they enjoy doing together.

“We’re planning to keep it up over the summer and just seeing it grow is so encouraging,” Findlay said. “We have an audience now that enjoys it.”

I think we have the same shoe size. ?

Casual day in the park. ?

This is one of my most flattering positions. #bearbelly ?

Depressed because I broke my diet and ate 7 pizzas. ??

I stubbed my toe and needed a hug. ?

Bear hugs are the best hugs. ?

Went for jog around the park, made it 0.1 miles, and had to be carried home. ? #couchto5k

Just another day in the neighborhood. ?

If I don't seem to be listening to you, be patient, I may have a small bit of fluff in my ear. ?

Who could resist hugging 120 lbs of pure fluffiness. ?

Every time I go out in the sun, I use the whole bottle of sunscreen. #firstworldproblems ?

Sometimes I don't like kisses because they tickle too much. ?

This is what dreams are made of. ?

I'm still working on my hugs… ?

Photographer Combines Movie Scenes With The Actual Places In A Single Frame
Impressive and Tiny Villa on Dunbar Rock Opens in Honduras
Backpacked: Explore New Zealand Through The Lens Of A Belgian Photographer
Is This The Ultimate And Most Dangerous Infinity Pool In The World?
Wide Seats And Plenty Of Legroom: These Old Pan Am Photos Show How Much Airline Travel Has Changed
Japanese Illustrator Imagines A World Where Humans Live Among Giant Animals
Children From A Remote Village In China Have To Take A Dangerous Path To Get To School
Haunting Photos Of Moscow’s Young Ravers And Their Lives After Dark
Haunting Photos Of A Deserted Island In Japan
Kiki Fernandes Captures The Poignancy Of De Saint-Exupéry’s Work In Gorgeous Photos Of Scenes From "The Little Prince" — In LEGO
2007 ‒ 2022 by Design You Trust. Proudly hosted by WebHostingBuzz.
Privacy Policy · Terms of Service · Content Removal Policy ❤️ 🇺🇦