From Tibetan monks playing basket ball with ice thawing high up in the Himalayas, to the pollution that hides behind the Taj Mahal, here’s pick from 60 exceptional environmental photographs, by photographers and filmmakers from 70 countries, that will go on show at the Royal Geographical Society in London from 29 June to 21 August. The winners will be announced on 28 June. 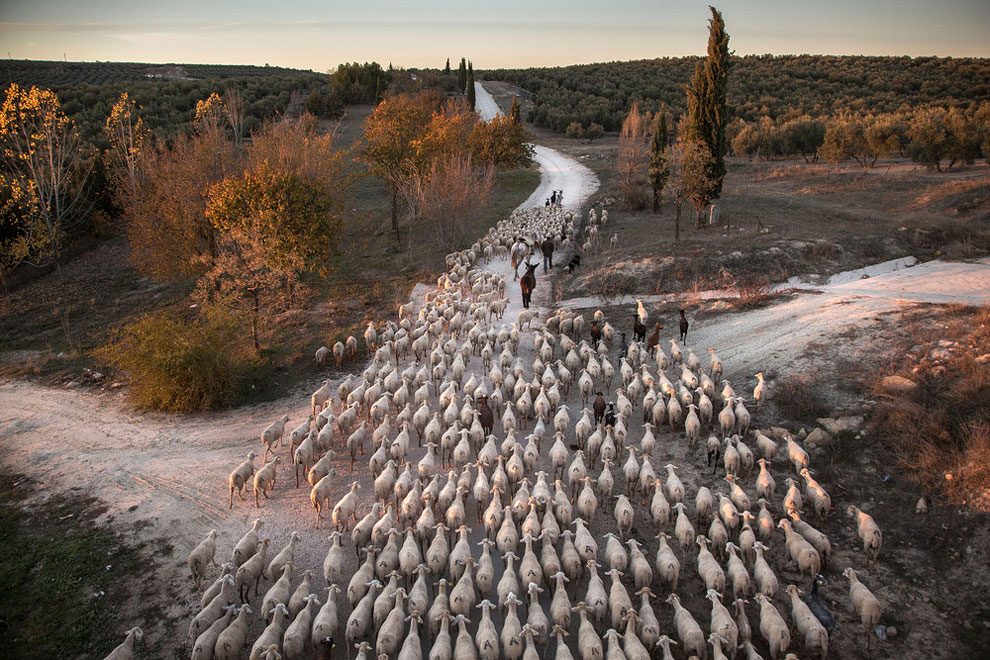 Transhumance in Spain by Susana Girón. Transhumance is a centuries old tradition of moving livestock many miles in search of better pasture in winter and summer. Above, the Alarcon family are taking their sheep from their home in Fatima (Granada) to Las Navas de San Juan (Jaen), a 124-mile journey on foot. More than 100 Spanish families continue the transhumance tradition every year. (Photo by Susana Girón/2016 Atkins CIWEM Environmental Photographer of the Year) 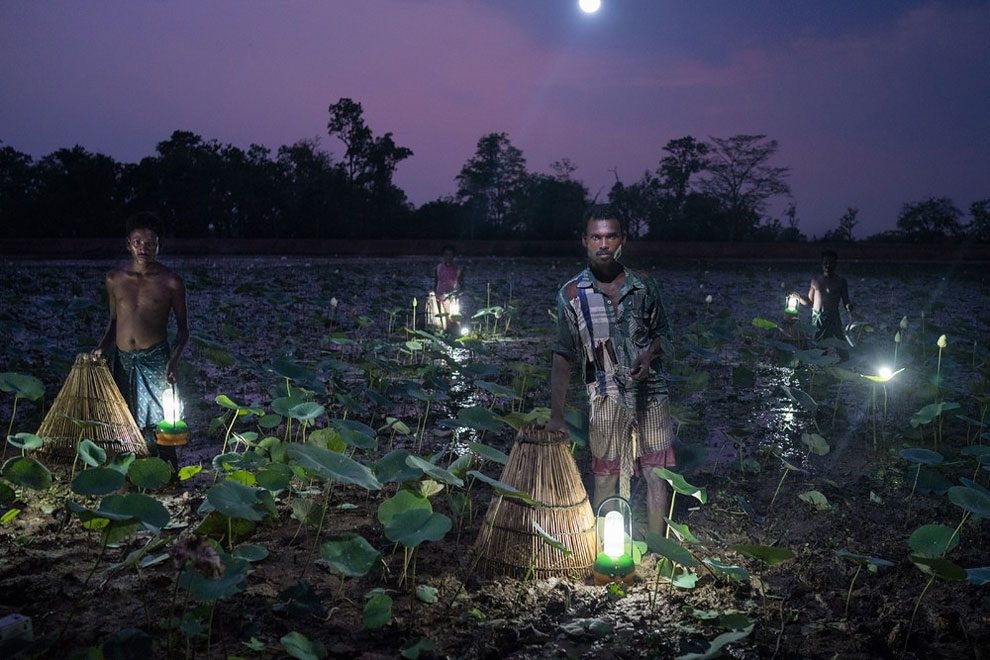 Solar Portraits, India, by Ruben Salgado Escudero. Villagers trap fish using cone-shaped baskets and solar light in Odisha. Fewer than half of the state’s 42 million residents use grid electricity. Roughly 1.1 billion people in the world live without access to electricity, and close to a quarter of them are in India. The portrait was set up using solar lights as the only source of illumination. (Photo by Ruben Salgado Escudero/2016 Atkins CIWEM Environmental Photographer of the Year) 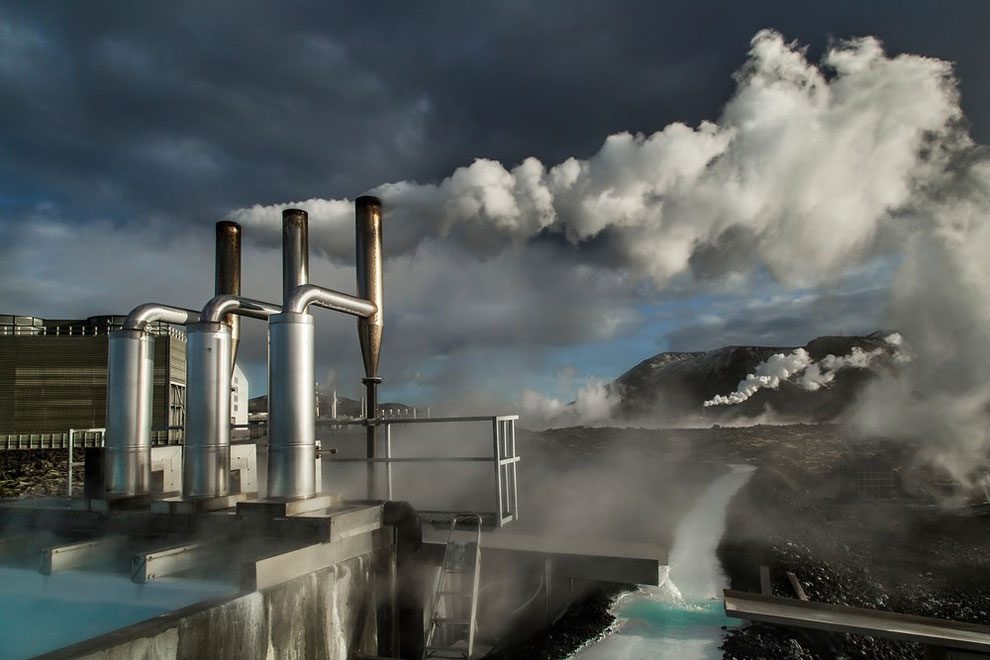 Geothermal Energy, Iceland, Larry Louie. Over 90% of the homes in Iceland are heated by geothermal energy and powered by hydro electricity. With the effects of global warming, rapidly melting glaciers in Iceland are providing an incredible amount of hydro energy. But harvesting power from nature is not without environmental consequences. (Photo by Larry Louie/2016 Atkins CIWEM Environmental Photographer of the Year) 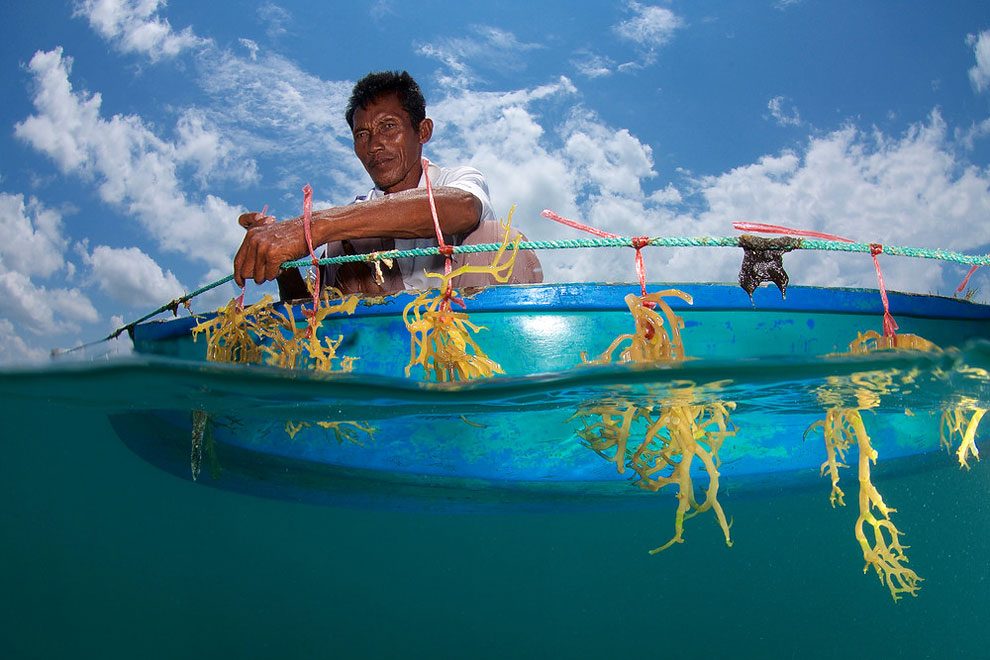 Seaweed Farming in Malaysian Borneo by Eric Madeja. Seaweed farming has been heavily promoted to be an alternative, stable and sustainable income for fisherman in the Semporna region, taking pressure off the overfished reefs. (Photo by Eric Madeja/2016 Atkins CIWEM Environmental Photographer of the Year) 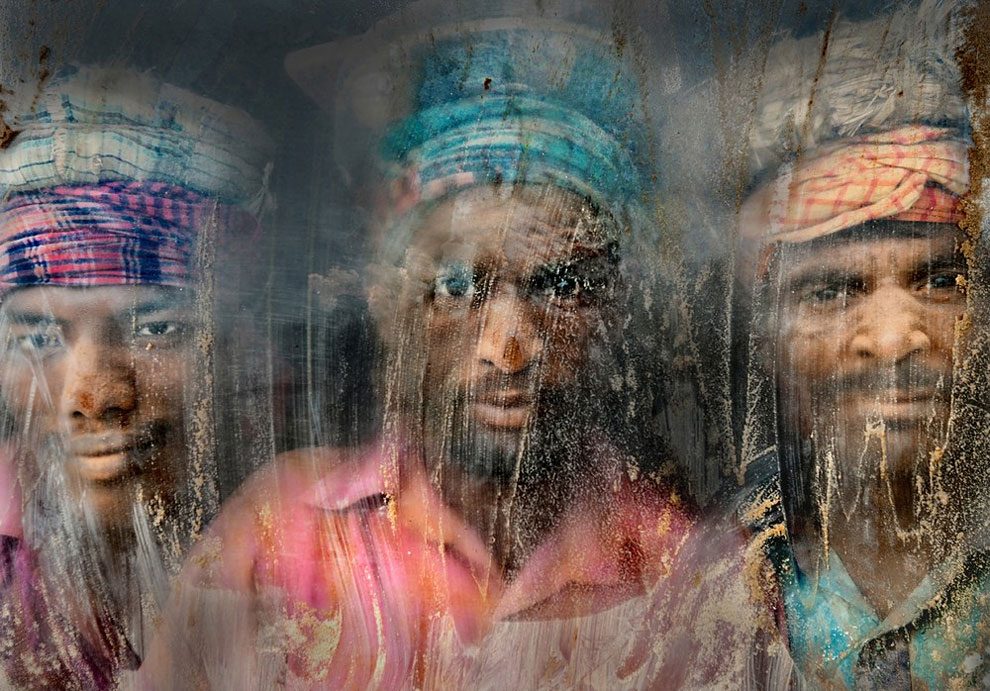 Gravel Workmen of Chittagong, Bangladesh, by Faisal Azim. Gravel workmen look through a glass window at a gravel-crushing yard in Chittagong. Full of dust and sand, it is an extremely unhealthy environment for working, but still hundreds of people work here for their livelihoods. (Photo by Faisal Azim/2016 Atkins CIWEM Environmental Photographer of the Year) 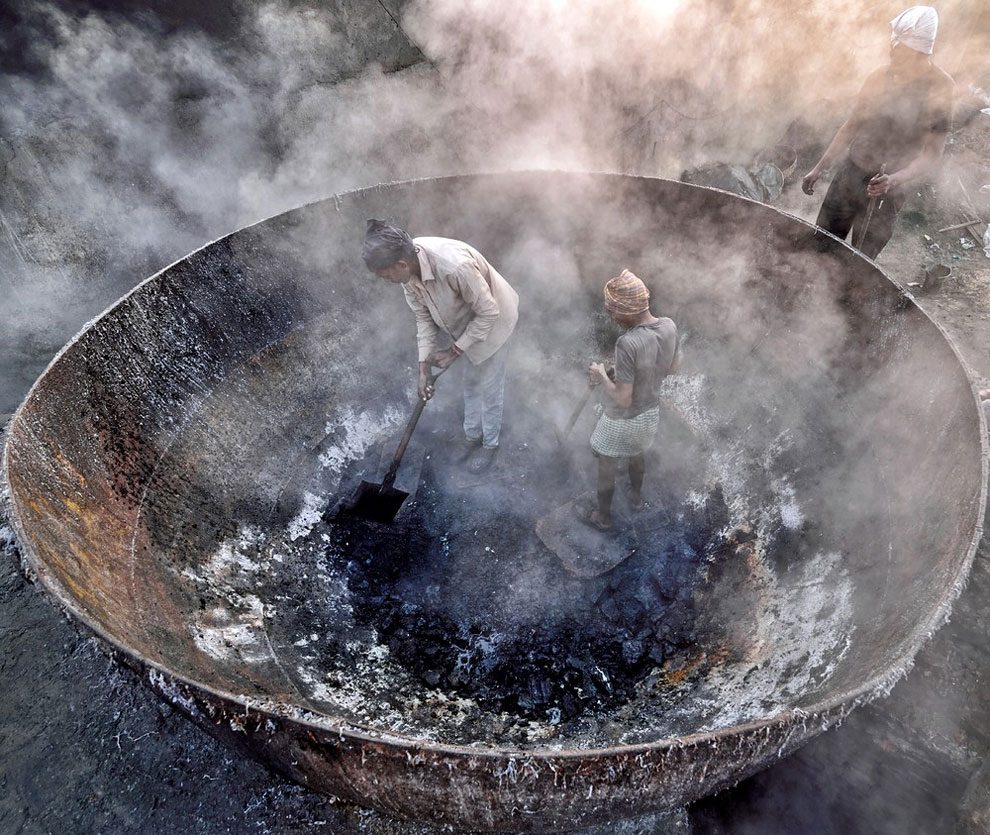 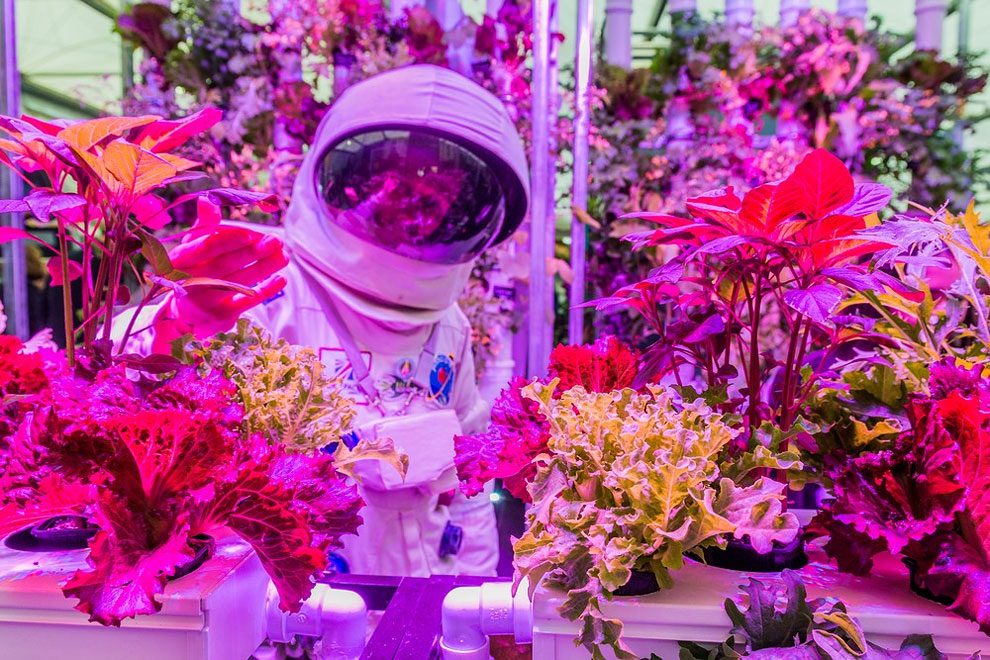 Hydroponics at RHS Chelsea Flower Show, UK, by Guy Bell. The future of food? Hydroponic plants on the Rocket Science stand are being developed for use in space and as one of the many ways to feed an ever-expanding population on Earth. (Photo by Guy Bell/2016 Atkins CIWEM Environmental Photographer of the Year) 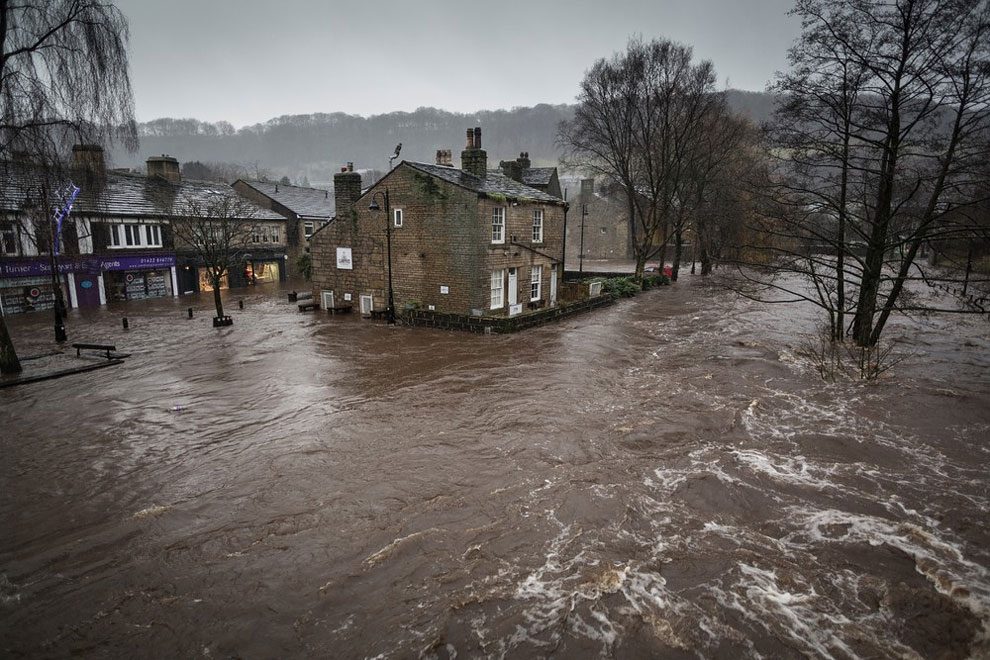 Floods in West Yorkshire, UK, by Steve Morgan. On Boxing Day 2015, a thriving former mill town in the Calder valley, Hebden Bridge, was flooded. Sirens echoed around the valley at 7.30am alerting sleeping residents to the rising waters about to engulf the town. (Photo by Steve Morgan/2016 Atkins CIWEM Environmental Photographer of the Year) 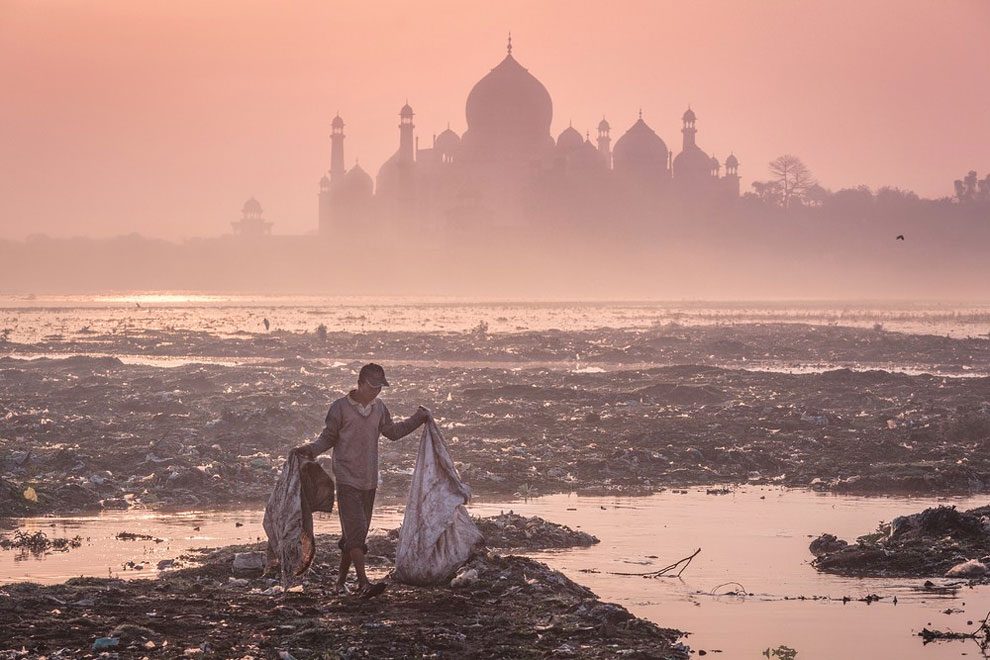 Behind the Taj Mahal, India, by Mustafa AbdulHadi. The early morning silhouette of Taj forms a backdrop to a garbage-strewn bank of the Yamuna river in Agra where a man scans the rubbish for valuables. (Photo by Mustafa AbdulHadi/2016 Atkins CIWEM Environmental Photographer of the Year)

This is the End... Bitch!
Photographer Merges Hundreds Of Images To Create A Chaotic Over-Populated World
Stunning Photos Capture Bicycles From Underneath In Rarely Seen Angles
Powerful Photos Show Pope Francis Praying Alone In St. Peter's Square
Photographer Documented More Than 1,000 Intricate Afro Hairstyles In Nigeria During The 1960s And 1970s
Photographer Luc Kordas Captures The Iconic Coney Island During The Most Vibrant Time
Dreamy Photos Of Boston And Massachusetts Suburbs By Greg DuBois
Paragliding Photographer Captures Stunning Landscape Images From High In The Air
Black Model Recreates Famous Fashion Campaigns To Highlight Lack Of Diversity In Fashion Industry
Amazing Bike Made of Ice
A Celebration Of British Wildlife: Spectacular Winners Of The Wildlife Photography Awards 2019 Contest
Unique Portraits Of Russians In 1868
2012 Miss Reef Calendar
Controversial Photos Inside The Homes Of Russia's Ultrarich Show The Country's Problem With Wealth Inequality
Bram Stoker's Chair Series by Sam Taylor-Wood
Artist Creates Surreal Images That Balance Between Reality And Imagination
Scotch Trooper: Photographer Combines Love For Storm Troopers And Whiskey In Hilarious Series
Beautiful Photographs Of Marilyn Monroe As The Fabulous Enchantresses, 1958
Chicago From Above: Stunning Drone Photography By Razvan Sera
Amazing Award-Winning Photos Of The Wildlife Photographer Of The Year 2017 Contest
Snow In NYC: Photos Of The Winter Wonderland By Joseph O. Holmes
Behind the Scenes Photographs From a 1950s Casting Call for a Long-Haired Model
Gorgeous Series Of Flowers Encased In Ice
The 11 Winners Of The Prestigious 2021 Audubon Bird Photography Contest
Choose The People’s Choice Award For Wildlife Photographer Of The Year
Photo of the Day: Let's Go Shopping!
Titanic Artifacts To Go To Highest Bidder At 100-Year Anniversary Auction: Who Will Buy $189 Million Collection?
"A Colorful Day Out To Coney Island": Color Photographs Of A Summer's Escape From New York City In 1948
Sunny Photos Of Skateboarding In California During The 1970s
Japanese Photographer Captures Beautiful Dreamy Landscapes of Kamakura in Infrared
atkins, ciwem, environmental, photographer, shortlist