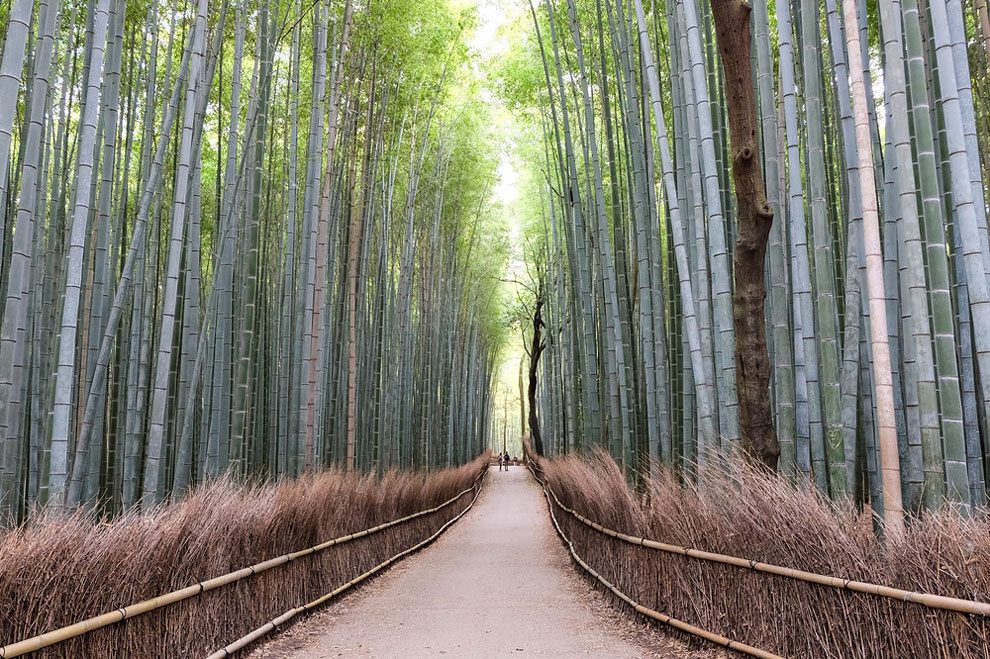 “I took this at 7am during an unusually quiet moment in the Arashiyama Bamboo Grove, in Kyoto, Japan. Mick Ryan, judge – The classic lead-in and vertical lines of this walkway through a bamboo forest are made complete by the two figures in the distance and the light illuminating the pale green of the canopy”. (Photo by Doug Stratton/The Guardian) 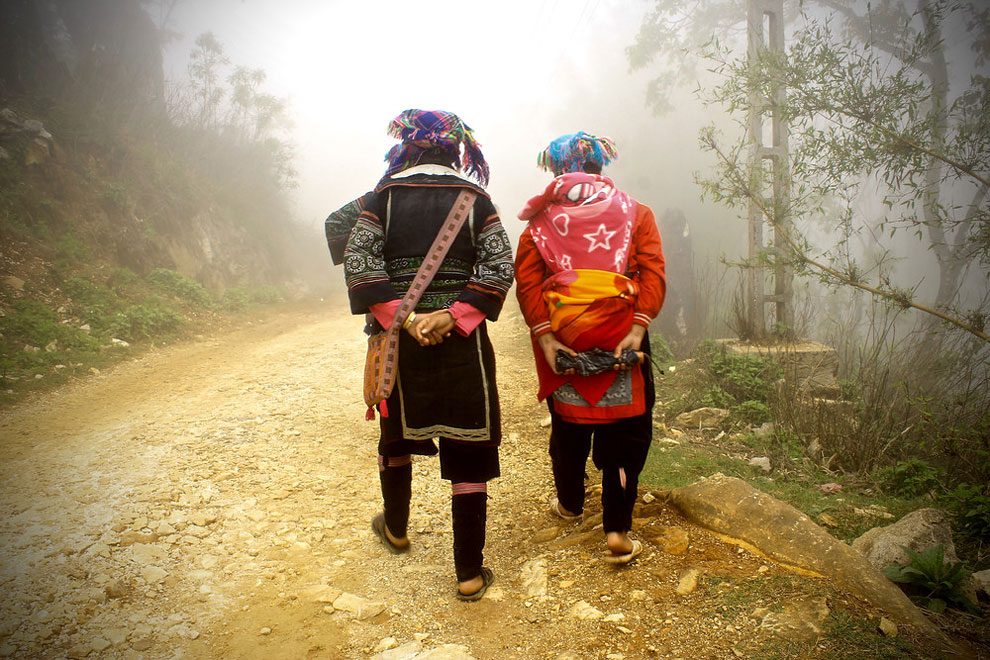 “Hmong ladies walking me to the village of Tivan, in Sapa. During my four-week trip to Vietnam I spent three days at one of the hill tribe’s homestays, and it was one of the best experiences I had in Vietnam”. (Photo by Giulia Ghinelli/The Guardian) “On the island of La Gomera, in the Canaries, in January every year there is a celebration of its patron: Saint Sebastian. The inhabitants descend upon the town for the Romería, a weekend of parading, dancing, singing and feasting in traditional dress. This is a fortunate, candid photograph, taken at midnight. I was drawn to the “ancientness” of the imagery juxtaposed with the use of the mobile phone”. (Photo by Ondre Nowakowski/The Guardian)

“While driving to the east of Vienna, towards Bratislava, I came across a large wind farm, and felt the low light and clouds added to the dramatic scene”. (Photo by Jonathan Snowball/The Guardian) 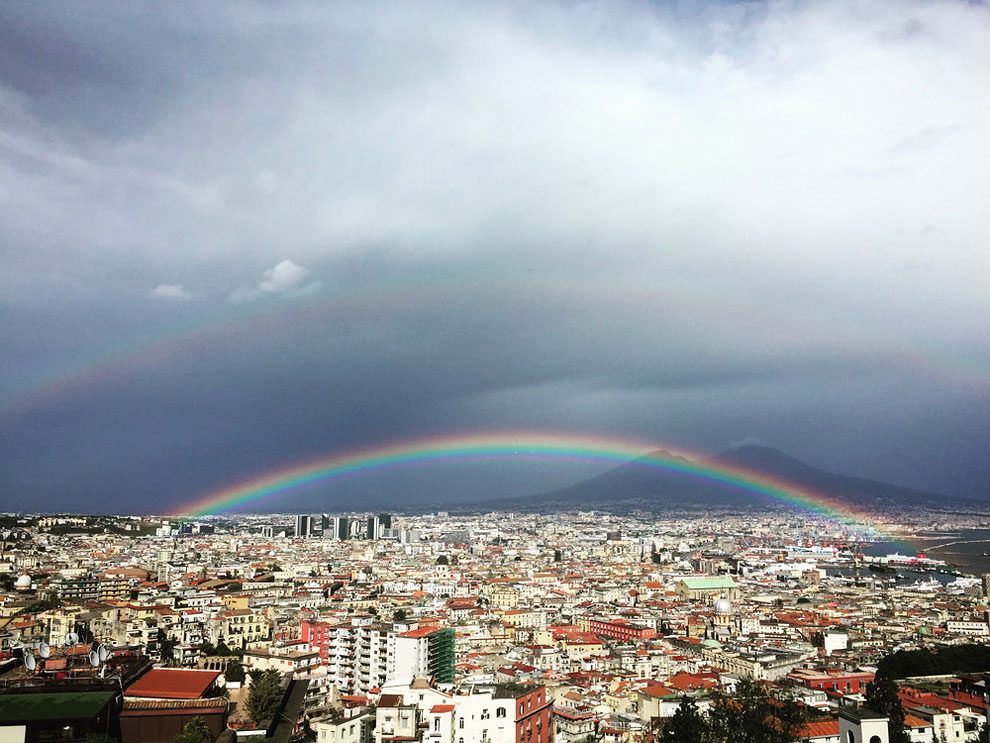 “A double rainbow that I felt was showering luck and love over Naples – with Mount Vesuvius looking on”. (Photo by Alexandra Louise Clintworth/The Guardian) 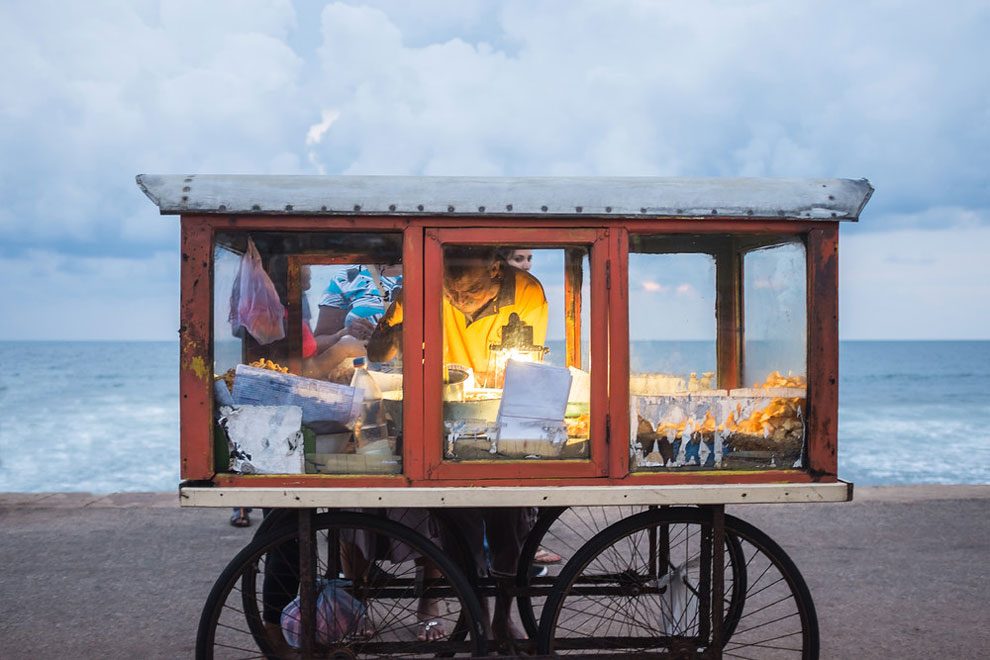 A man sells homemade snacks from his cart on the promenade by the Galle Face Hotel, Colombo, Sri Lanka. Shortly after this image was taken there was a huge downpour and everyone had to run for shelter”. (Photo by John Marsland/The Guardian) 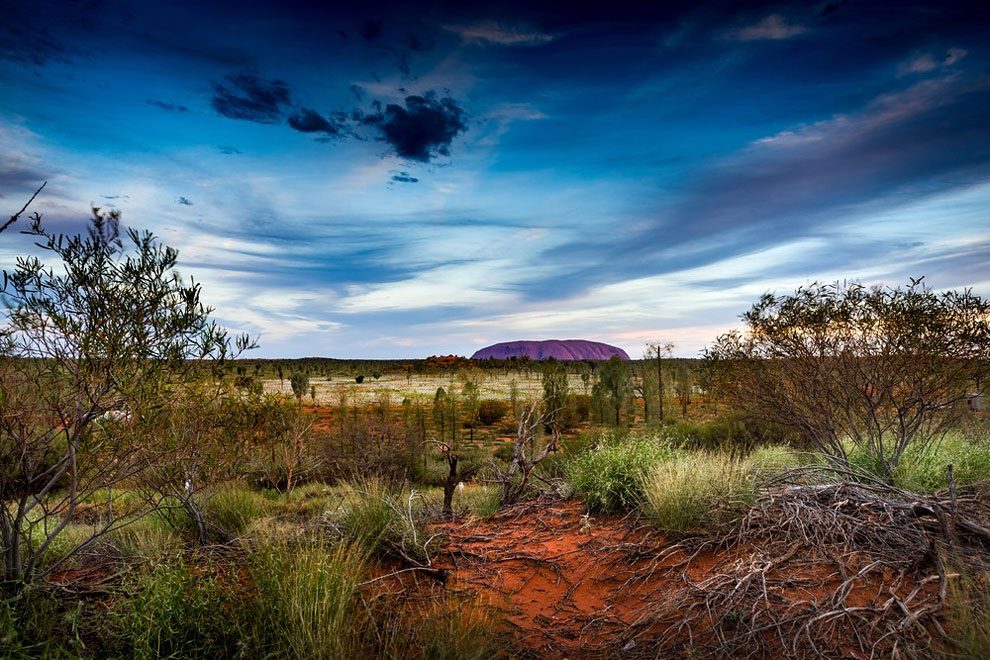 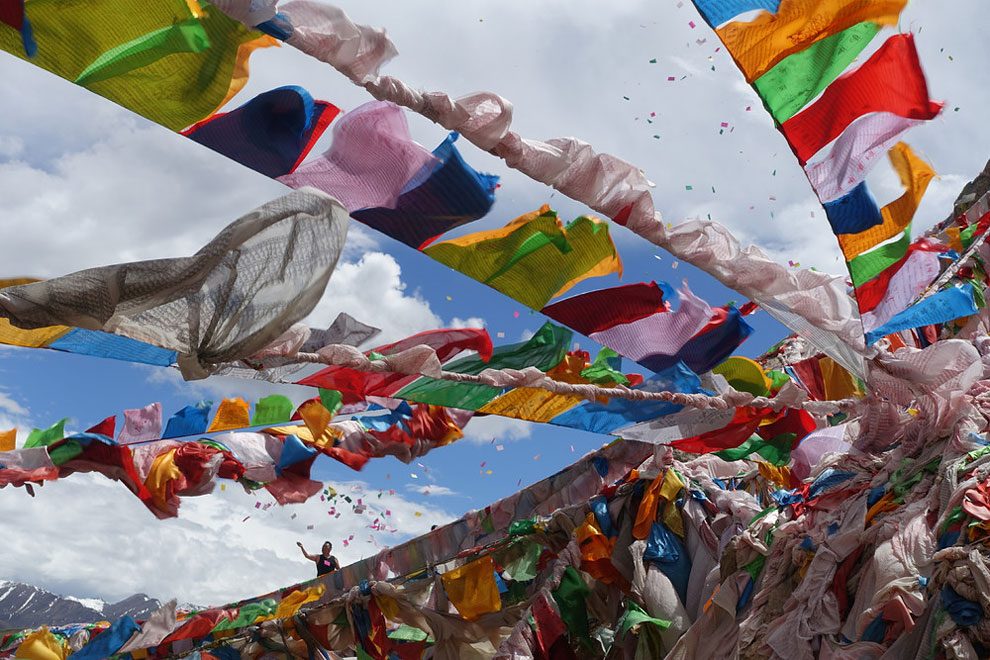 “Above the chaos of thousands of flapping prayer flags, in Tibet, a buddhist throws prayer slips into the wind”. (Photo by Luke Pilkington/The Guardian) 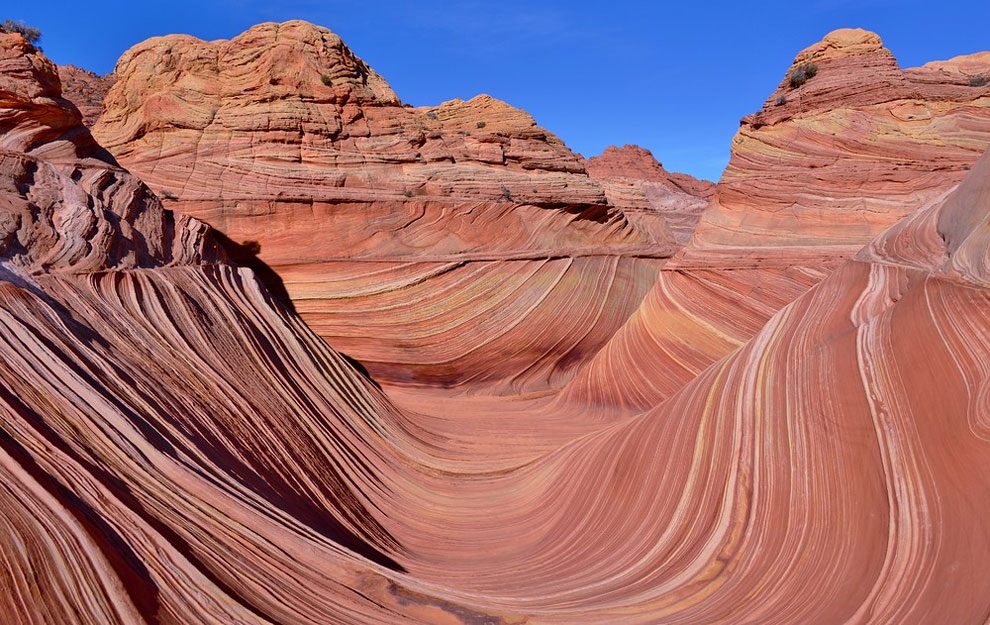 “I’ve been trying to get to this place, Coyote Buttes in Utah and Arizona, US, for many years. I finally got there in January this year. It was worth waiting for. Dreams do come true”. (Photo by Christa Lamb/The Guardian) 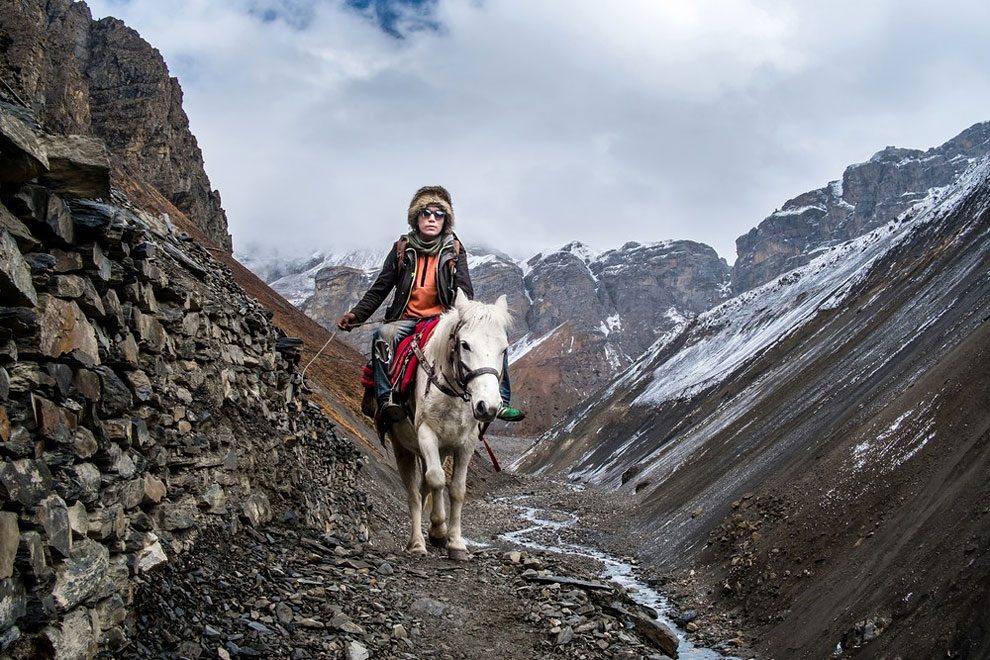 “As we approached the start of the Thorong La pass in Nepal this horseman came towards us. I managed to get a shot before he got by us on the narrow path”. (Photo by Keith Urry/The Guardian) 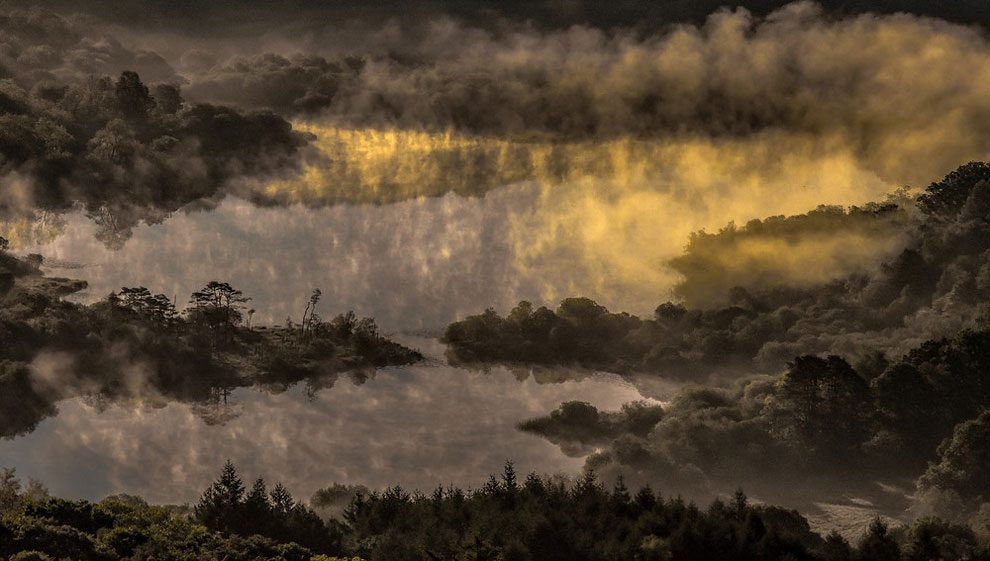 “Golden Mist on Elterwater in the Lake District. After a 4am alarm and a two-mile run to the top of the fell behind our campsite, I waited for the moment when just enough of the lake started to reappear from behind the mist and the sun reached out from the other side of the valley”. (Photo by Mike Cooke/The Guardian) 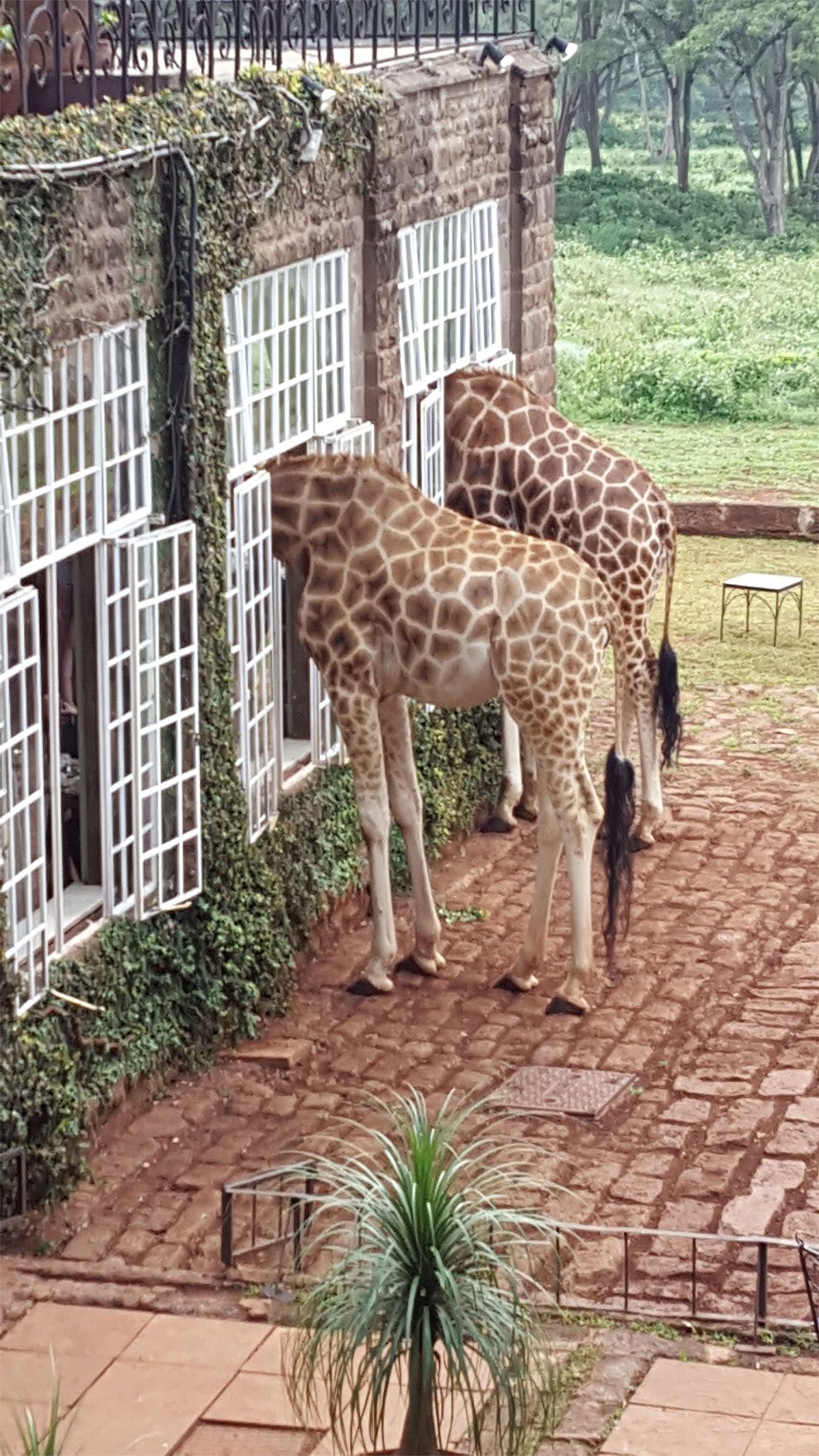 “This photograph was taken while staying at Giraffe Manor in Nairobi, Kenya, at Christmas 2015. Every morning the Rothschild giraffes come up to the manor for breakfast”. (Photo by H.M. Jackson/The Guardian) 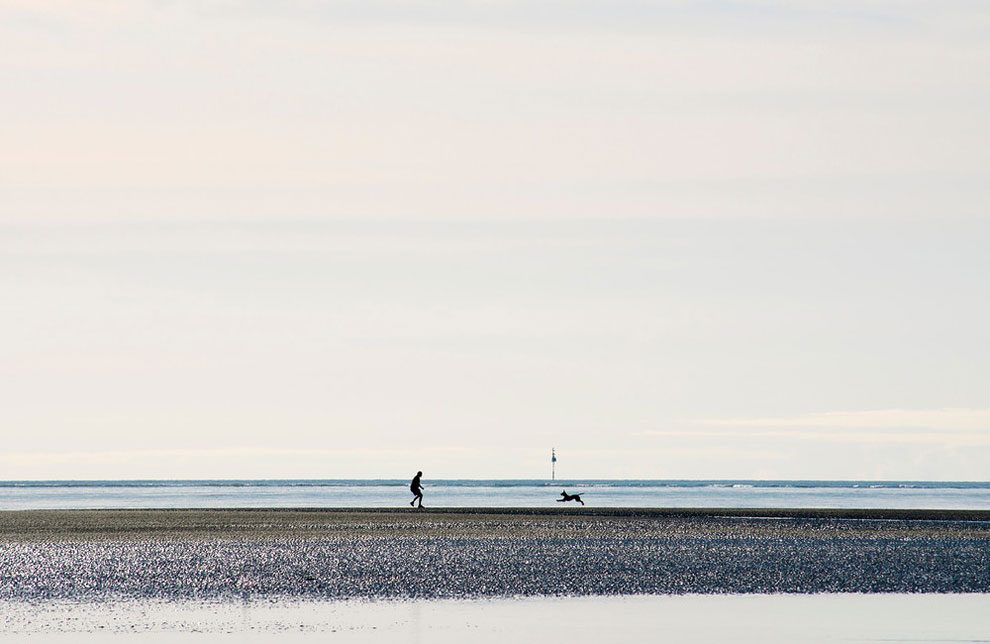 “Taken on a bright, sunny day in winter, on Tahunanui beach in Nelson, New Zealand. The beach was full of people enjoying the long weekend for the Queen’s birthday; but nobody was having as much fun as this man and his dog playing by the sea. Mick Ryan, judge – A peaceful image with subtle, pastel tones and lots of negative space – the frame doesn’t always have to be filled – highlight a powerful focal point of man and dog. Perfect timing, too”. (Photo by Ed Clarke/The Guardian) 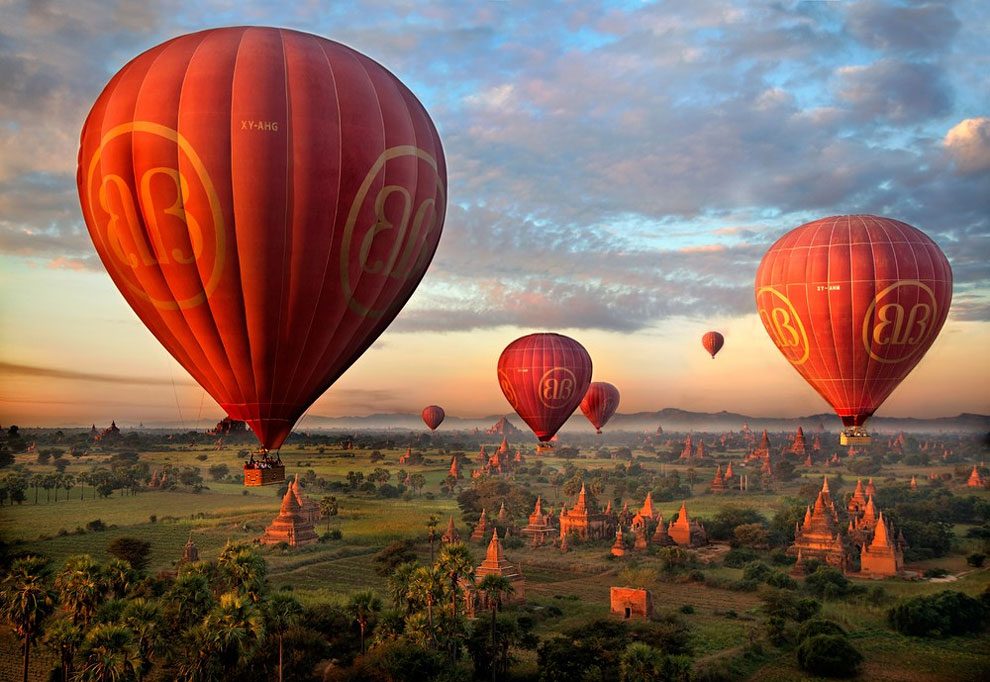 “The fantastic landscape of Bagan in Myanmar features hundreds of temples and pagodas as far as the eye can see. Experiencing this sight at dawn from the basket of a hot air balloon will remain engraved in my memory for ever. Mick Ryan, judge – What a magical photograph and place. The Buddhist temples and pagodas fill the plains of Bagan in Myanmar at sunrise… the golden hour providing beautiful light to illuminate the retrogression of the temples and balloons toward a misty, mountainous distance. An excellent, exotic photograph that makes you want to book a flight”. (Photo by Alastair Swan/The Guardian)

"The Struggle For Utopia": Everyday Soviet Life In Magnificent Photos By Semyon Friedland
Vintage Photos From Between The 1940s And 1970s Show How Glamorous Flying Used To Be!
Photographer Captures Amazing Pictures of Poal Bears, Guardians of the Abandoned Polar Station
Photographer Created A Dark Fantasy Photography Series About Mermaids Forced To Live On Land
UK Astronomy Photographer Of The Year 2016 Shortlist
Best NASA Pictures of 2020
Through Photographer Jesse Rieser’s Lens, The Architectural Fallout Of The E-Commerce Revolution Is Beautiful
Laragh McCann for Elle France, April 2012
Meet Rava Ray, The Sexy Queen Of The Stingrays
"Discover Tokyo": Stunning Candid Street Photos Of Tokyo By RK
A Photo Serie Where The Dancer And Photographer Arthur Cadre Twist His Body Into Mesmerising Position
The Visual Poetry Of Sébastien Rivest In Black And White
Outdoor Photographer Of The Year 2017: Category Winners Revealed
No, This Is Not Skyrim, This Is Czech Prachov Rocks In Bohemian Paradise
This Ukrainian Photographer Captures A Fairytale Photo Masterpieces
Close Up Pictures Of Tennis Players Just Look Like People Trying Really Hard To Control Their Telekinetic Power
Spectacular Winning Images of The Astronomy Photographer of the Year 2022
Stunning Photos Of The Abandoned Armoured Repair Factory In Kharkiv, Ukraine
Walking with Giraffes
A Celebration Of British Wildlife: Spectacular Winners Of The Wildlife Photography Awards 2019 Contest
The Most Epic Entries From The 2016 National Beard And Moustache Competition
Neon, Moody And Cinematic Nightscapes Of Shanghai And Beyond By Victor Chiang
20 Amazing Photos Of A Young And Hot Axl Rose In The 1980s
Censorship Tells the Wrong Story
competition, guardian, photography, readers, travel