Breathtaking Aerial Photos That Will Alter Your Perception Of Our Planet

The Daily Overview is a project that celebrates our planet and aims to highlight human impact through stunning aerial shots of locations around the globe. Considering that its central focus is on Earth, you might be surprised to learn that the inspiration for this venture initially began in outer space. Founder Benjamin Grant began thinking about this idea when he found out about the “overview effect”, an experience shared by astronauts who have just seen Earth for the first time as a tiny, blue sphere surrounded by darkness. 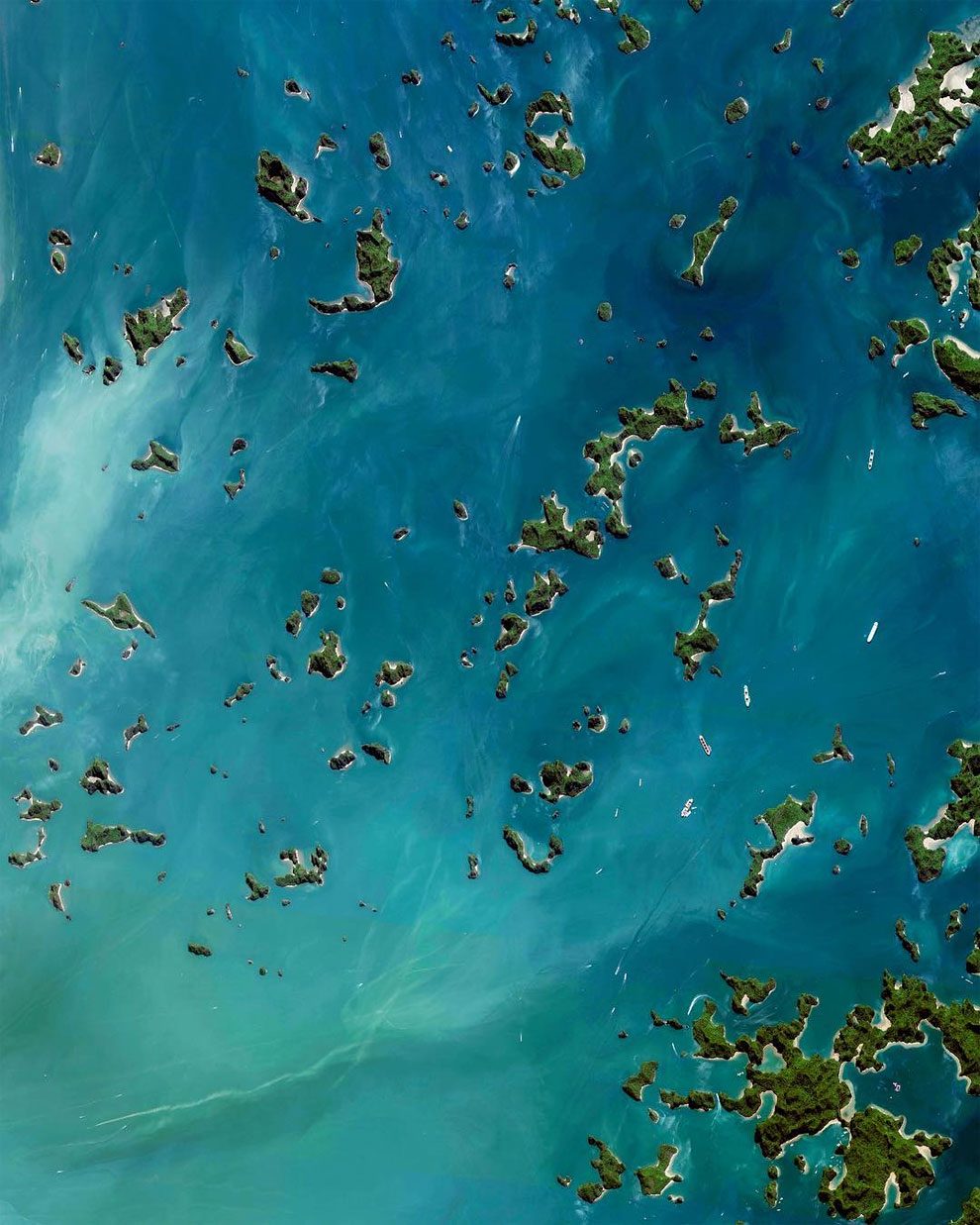 Hạlong Bay, located in the Quảng Ninh Province of Vietnam, is a stunningly beautiful destination. Here, towering limestone pillars and tiny islands topped by a rich, green forest rise from the beautiful waters of the Gulf of Tonkin. Halong translates as ‘where the dragon descends into the sea’ and local legend suggests that this seascape was created when a great mountain dragon charged towards the coast, its flailing tail gouging out the valleys and crevasses in its path. 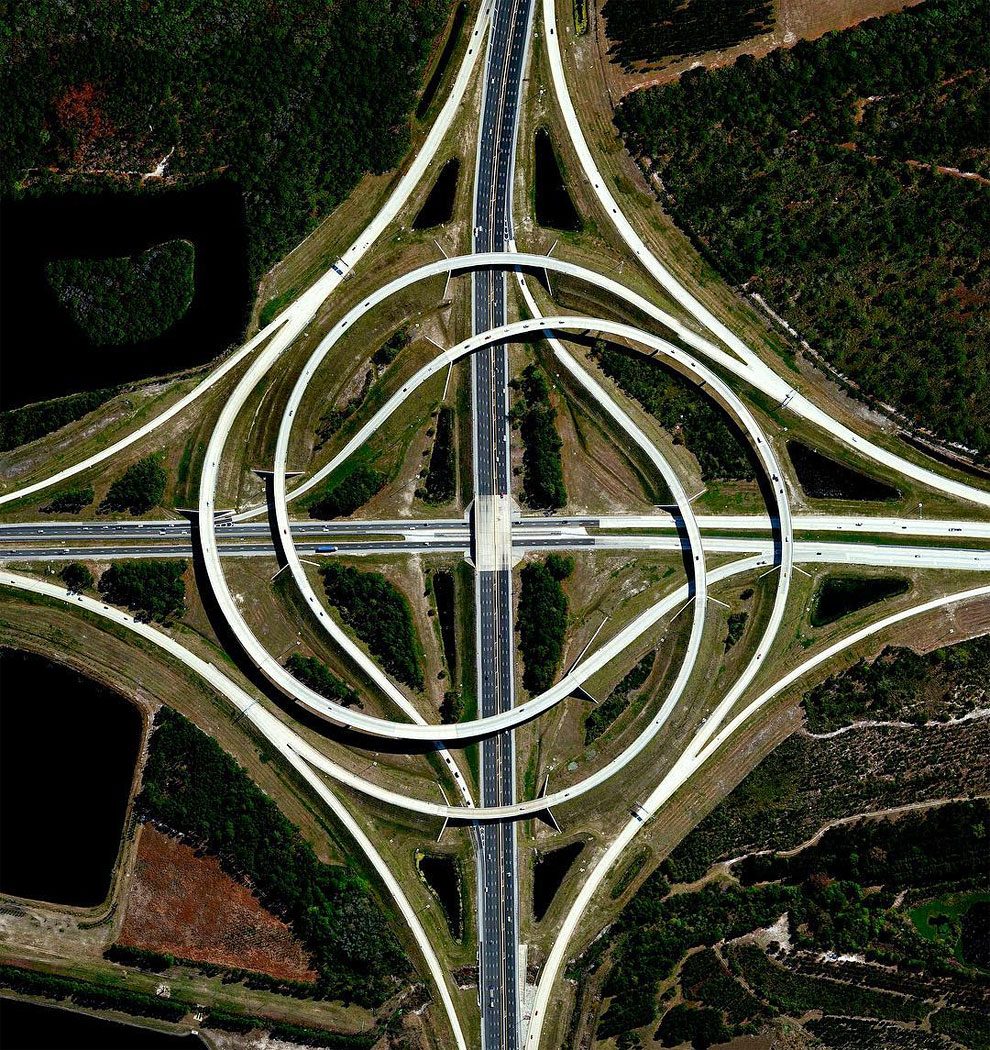 Zoom in and check out this turbine interchange connecting SR 9A and SR 202 in Jacksonville, Florida, USA. Also known as a whirlpool interchange, this structure consists of left-turning ramps sweeping around a center interchange, thereby creating a spiral pattern of right-hand traffic. 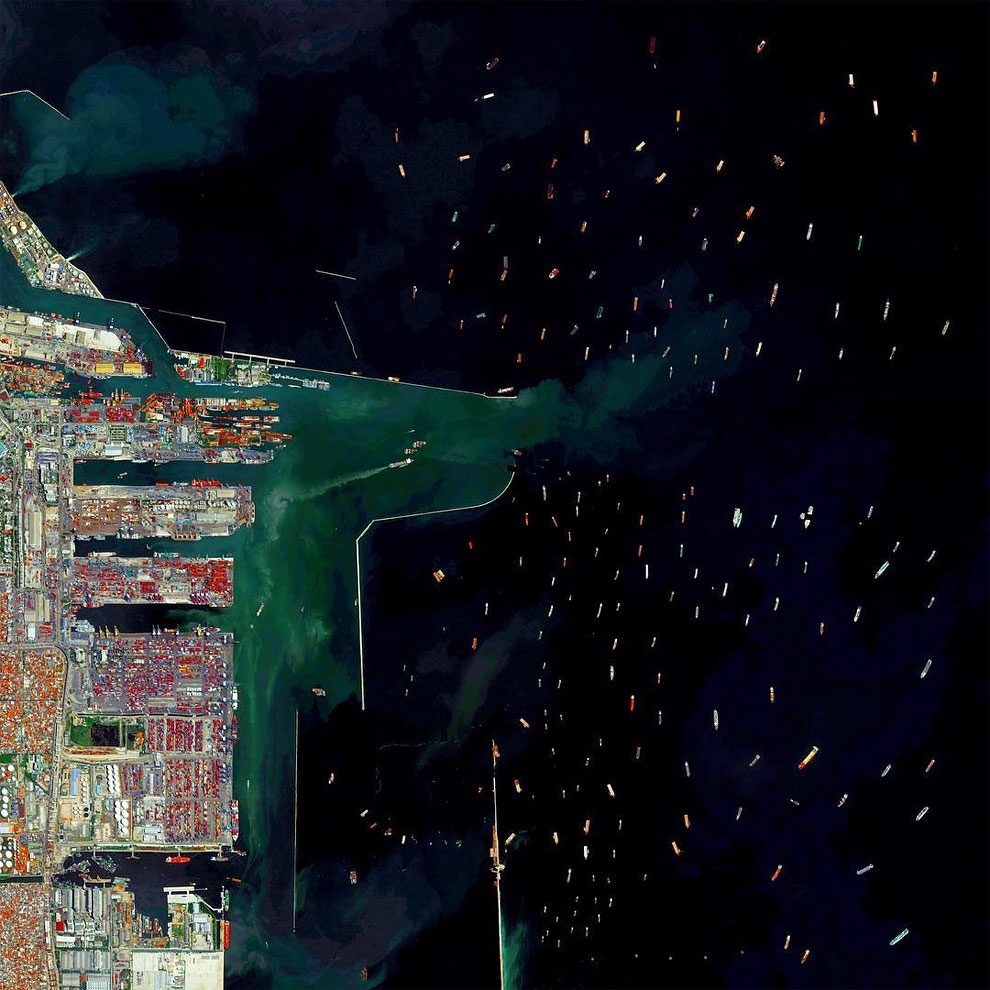 Dozens of massive cargo ships and tankers – some weighing up to 300,000 tons – are anchored outside the Port of Tanjung Priok in Jakarta, Indonesia. The facility is the country’s busiest and most advanced seaport, handling more than 50% of Indonesia’s trans-shipment cargo. The port is also among the least efficient in all of Southeast Asia, due to slow customs handling and limited docking capacity. 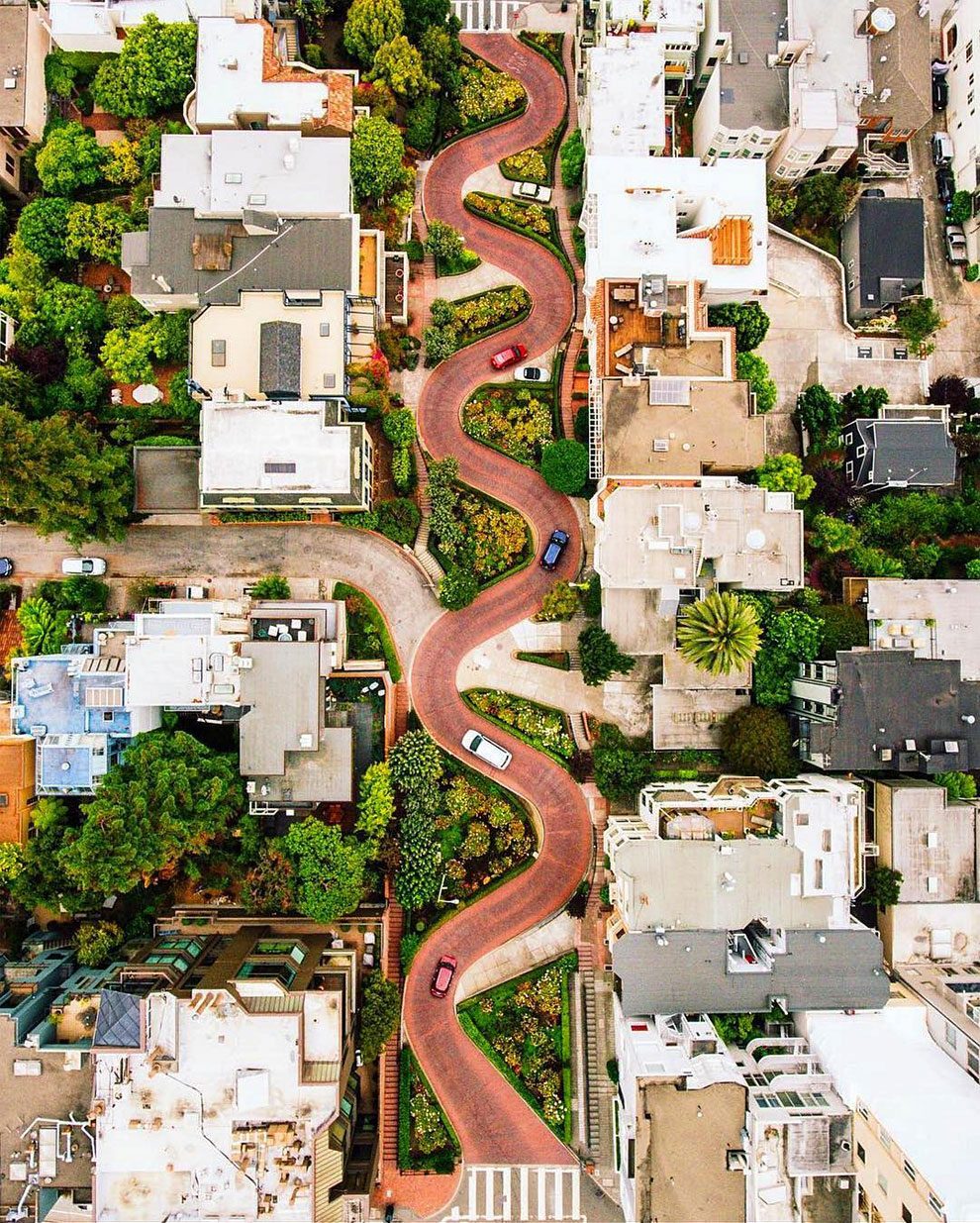 Lombard Street runs from east to west in San Francisco, California, USA. With eight hairpin turns dispersed over a one-block section in the Russian Hill neighborhood, Lombard is often referred to as “the most crooked street in the world.” 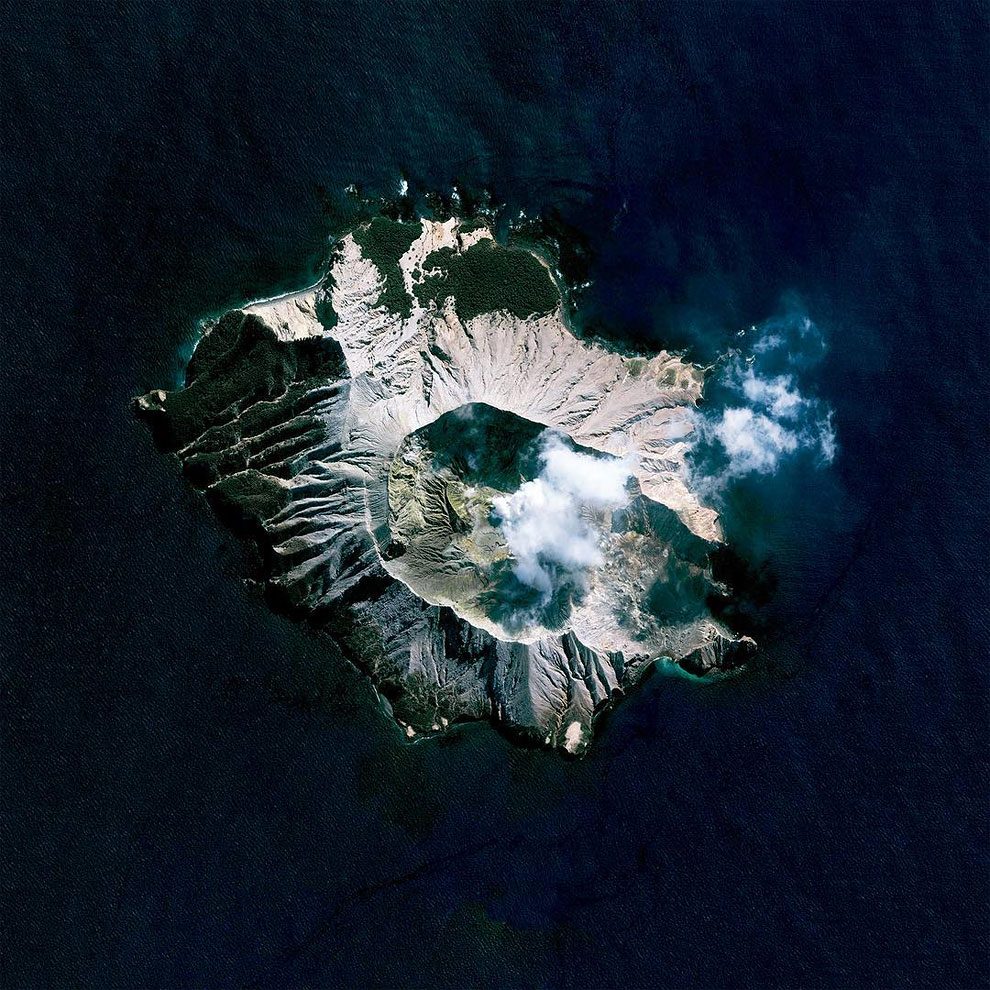 Whakaari, also known as White Island, is an active stratovolcano, situated 48 km (30 mi) from the North Island of New Zealand in the Bay of Plenty. Whakaari is New Zealand’s most active volcano, and has been built up by continuous eruptions over the past 150,000 years. The island is approximately 2 km (1.2 mi) in diameter and rises to a height of 321 m (1,053 ft) above sea level. 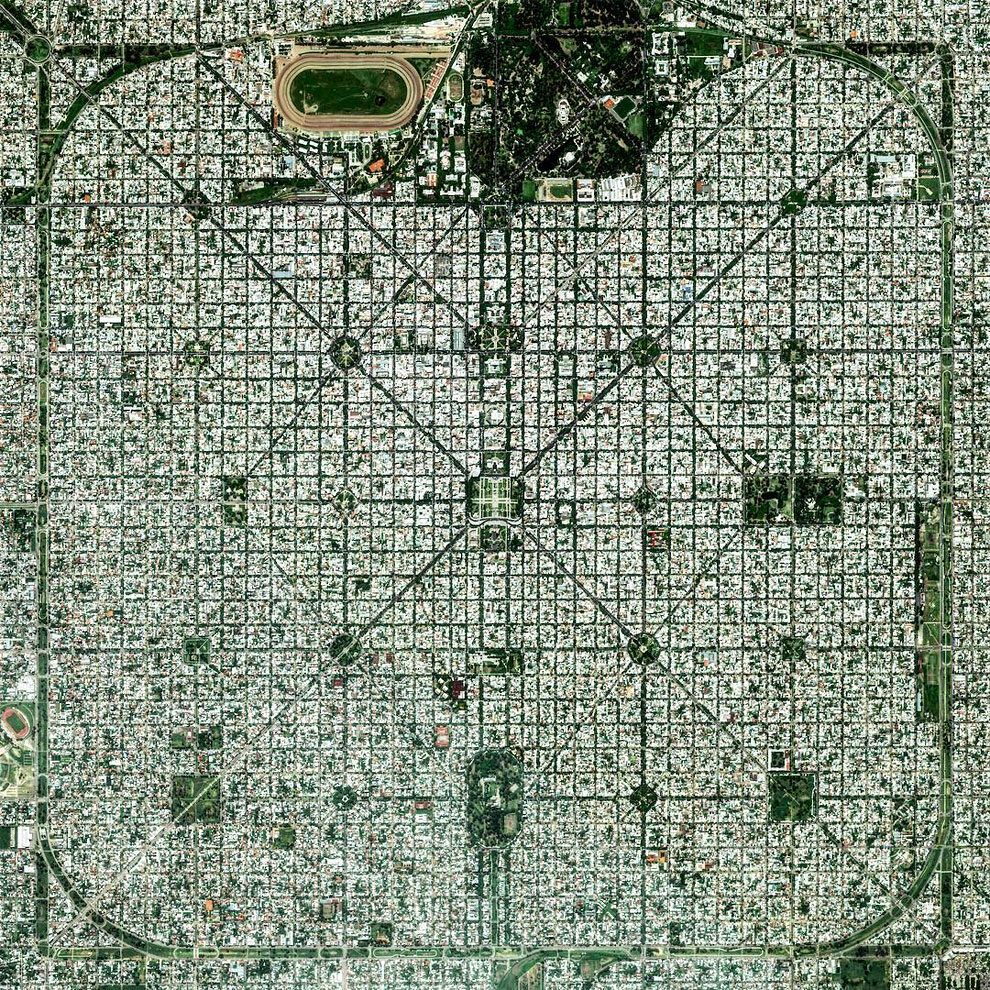 The planned city of La Plata, the capital city of the Province of Buenos Aires, is characterized by its strict grid pattern. At the 1889 World’s Fair in Paris, the new city was awarded two gold medals for the “City of the Future” and “Better performance built.” 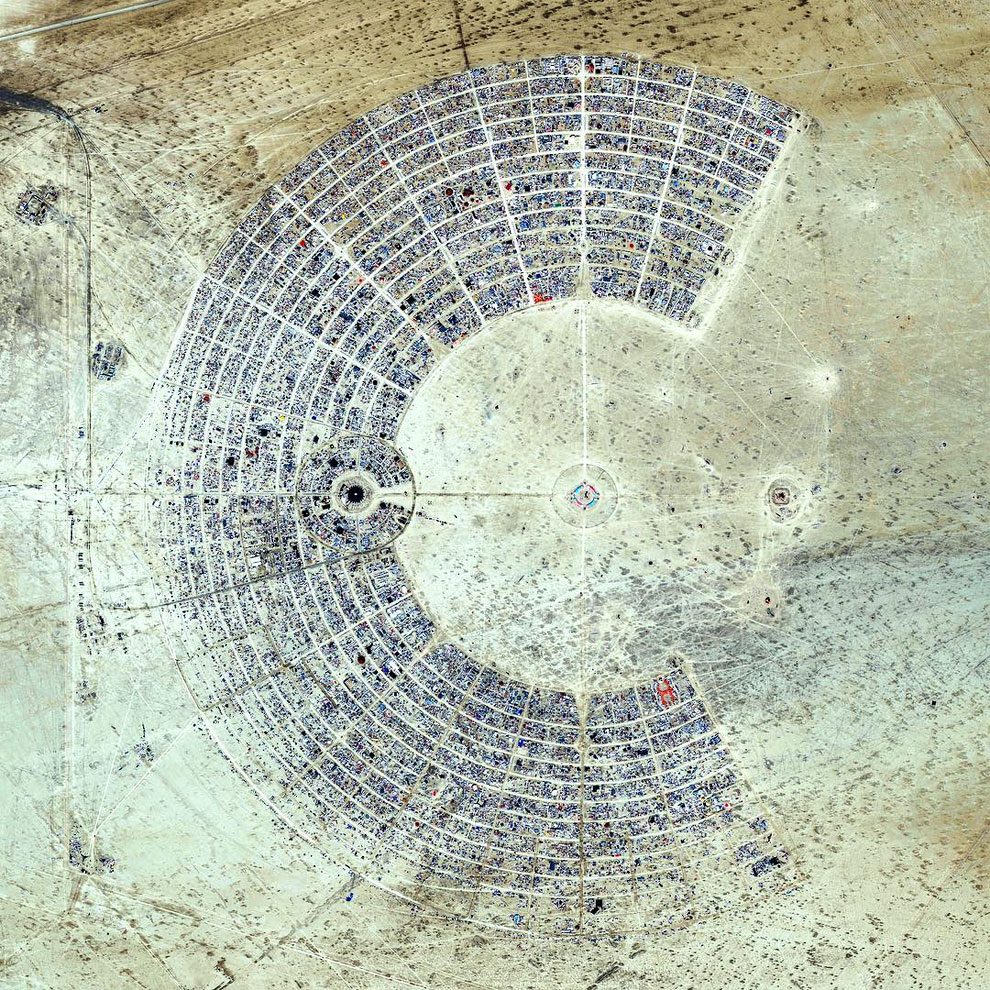 Over the next few days, thousands of people from around the world will head to the desert in Nevada, USA to construct Black Rock City. Laid out in a grid plan with radiating avenues named after the numbers on a clock, the city serves as home to roughly 60,000 people for Burning Man, an annual week-long event. 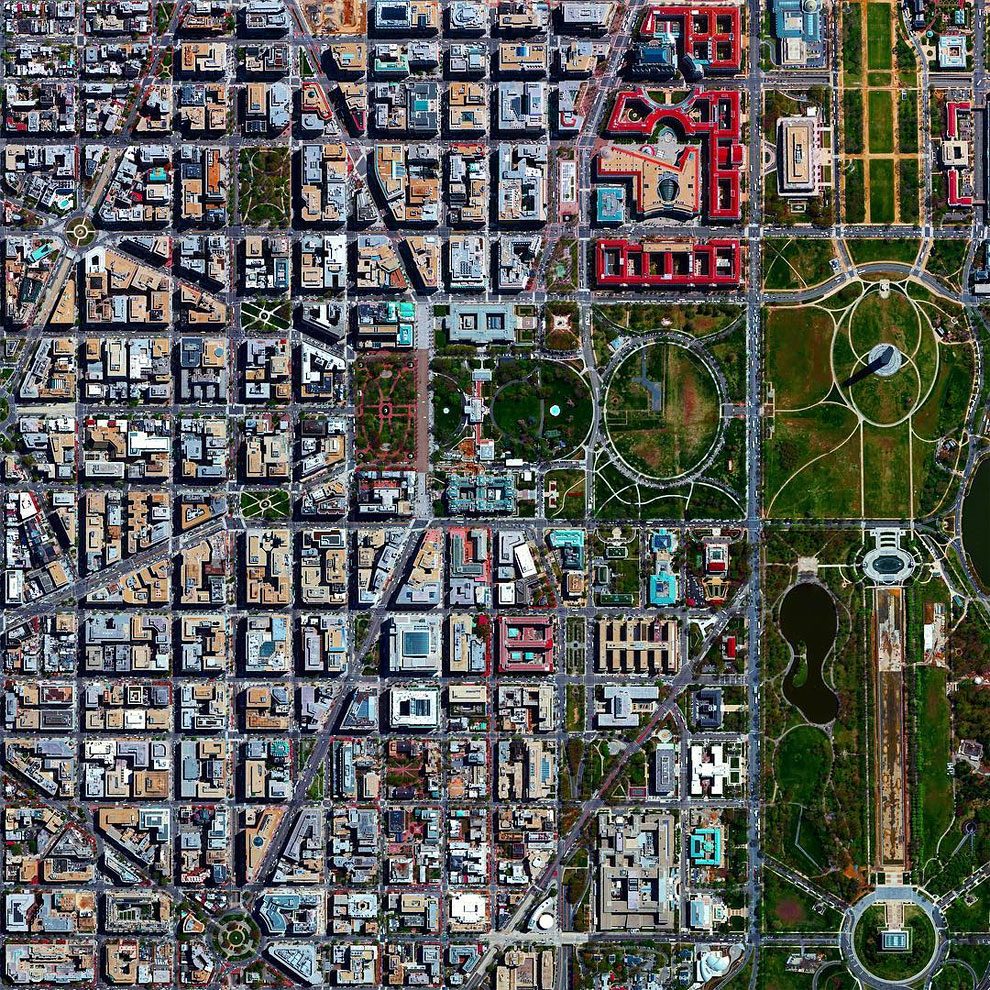 Overview of Washington, D.C., USA. The city’s L’Enfant Plan was developed in 1791 by Major Pierre Charles L’Enfant for George Washington, the first President of the United States. L’Enfant designed a compass-aligned grid for the city’s streets, with intersecting diagonal avenues that were later named after the states of the union. The diagonal avenues also intersect with the north-south and east-west streets at circles and rectangular plazas in order to create more open, green spaces. 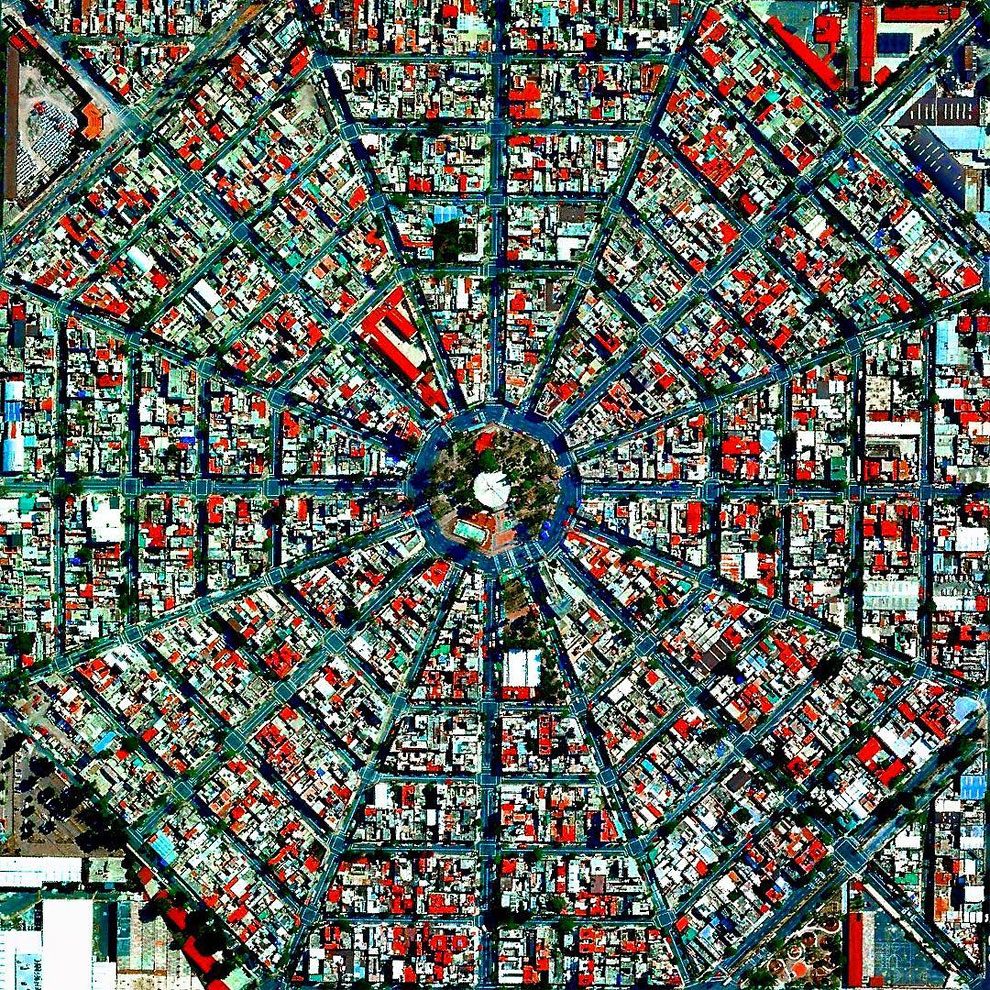 The radiating streets that surround the Plaza Del Ejecutivo in Mexico City, Mexico. 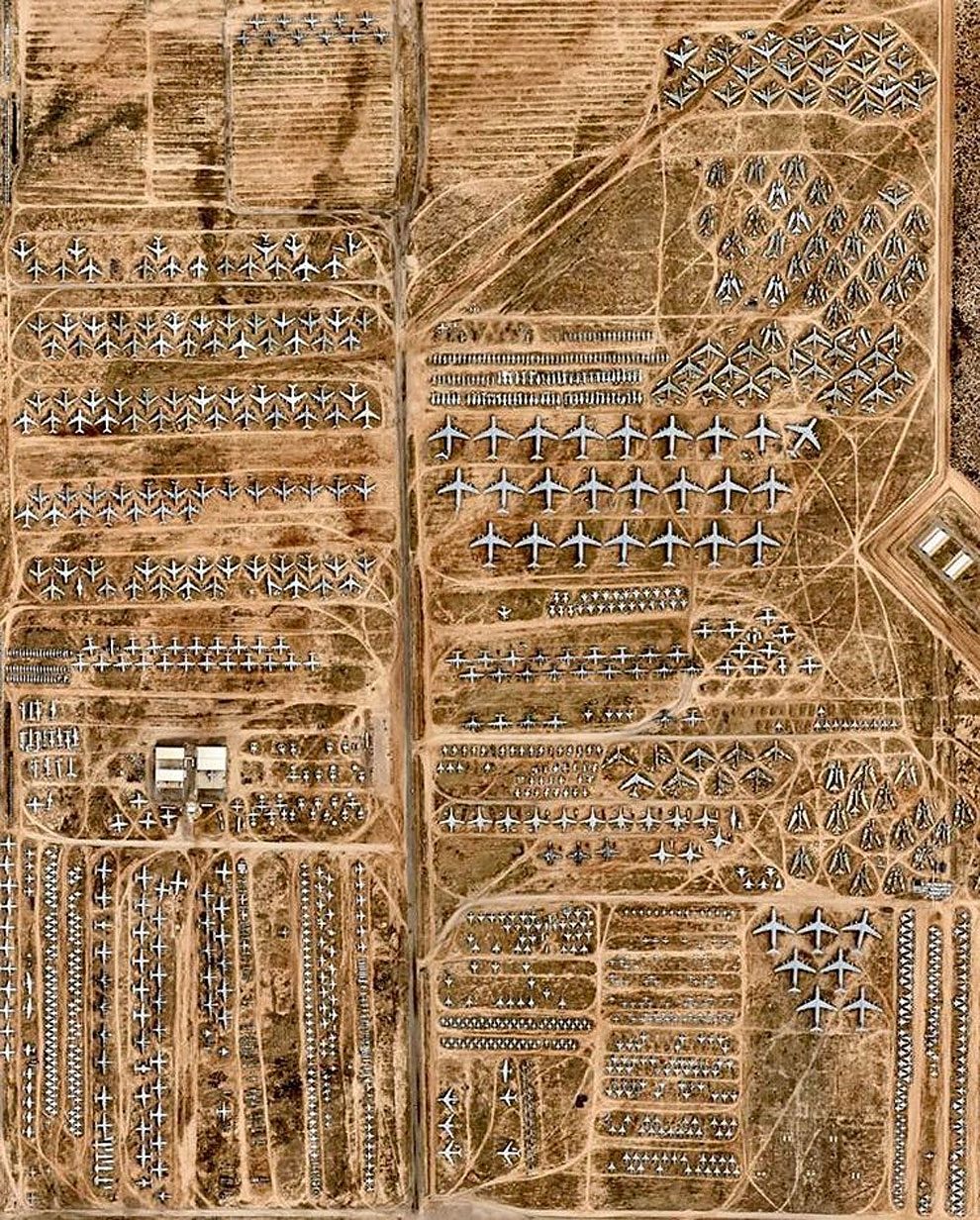 The largest aircraft storage and preservation facility in the world is located at Davis-Monthan Air Force Base in Tucson, Arizona, USA. The boneyard — run by the 309th Airspace Maintenance and Regeneration Group — contains more than 4,400 retired American military and government aircraft. 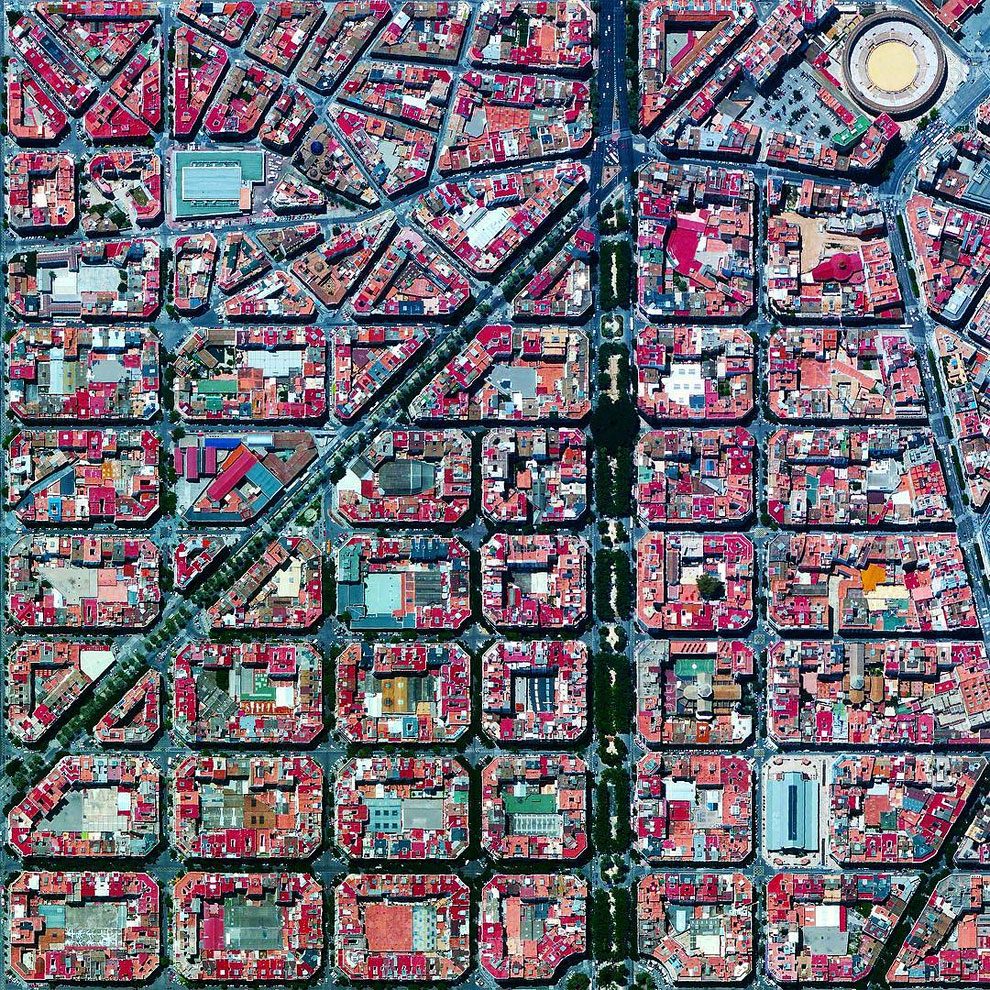 The urban plan of the L’Eixample district in Valencia, Spain is characterized by long straight streets, a strict grid pattern crossed by wide avenues, and apartments with communal courtyards. 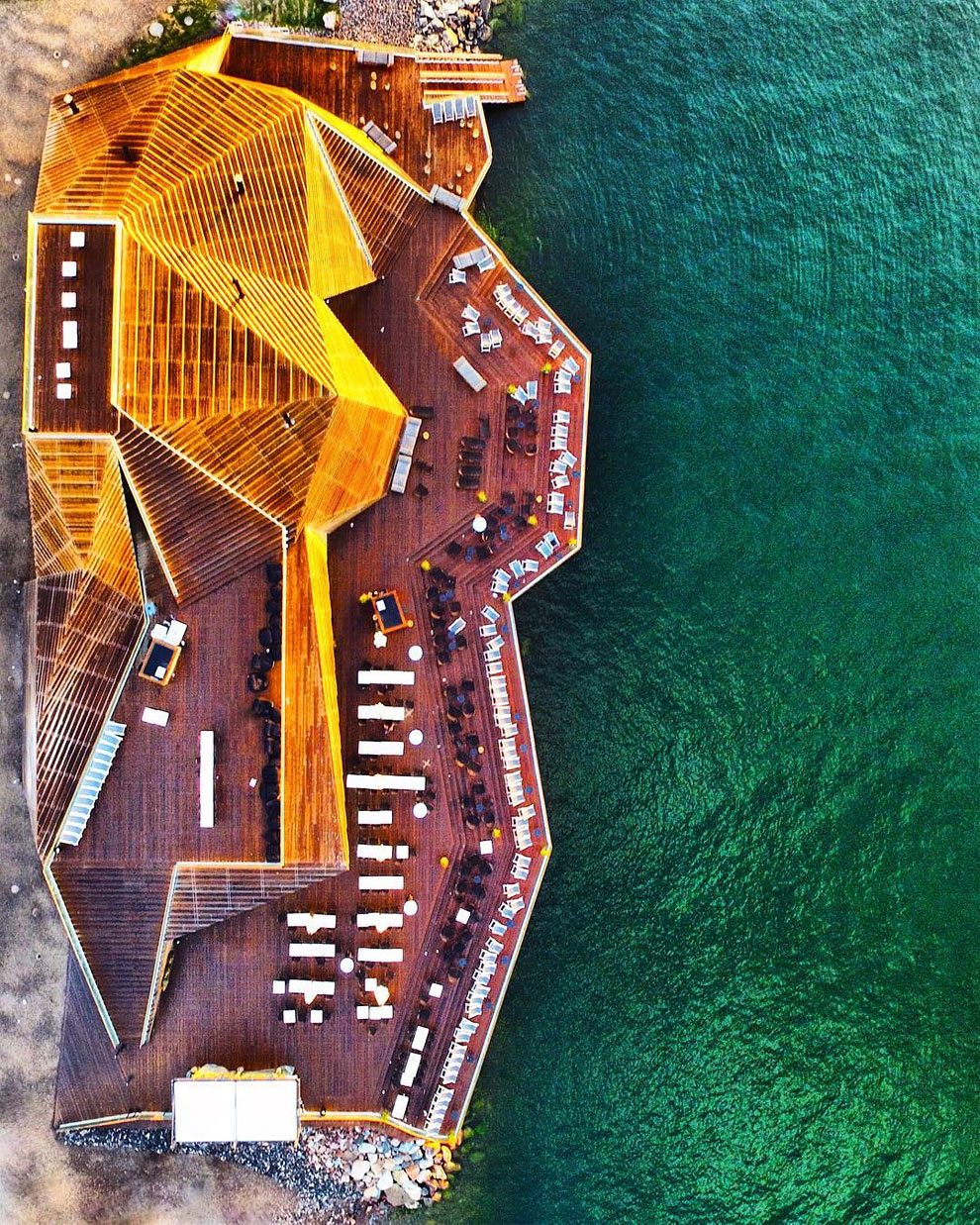 Löyly is a public sauna located on the edge of the Baltic Sea in Helsinki, Finland. The building, constructed with repurposed wood, features a shell-like design that has been described as a “tunturi” – the Finnish word for something in between a hill and a mountain. 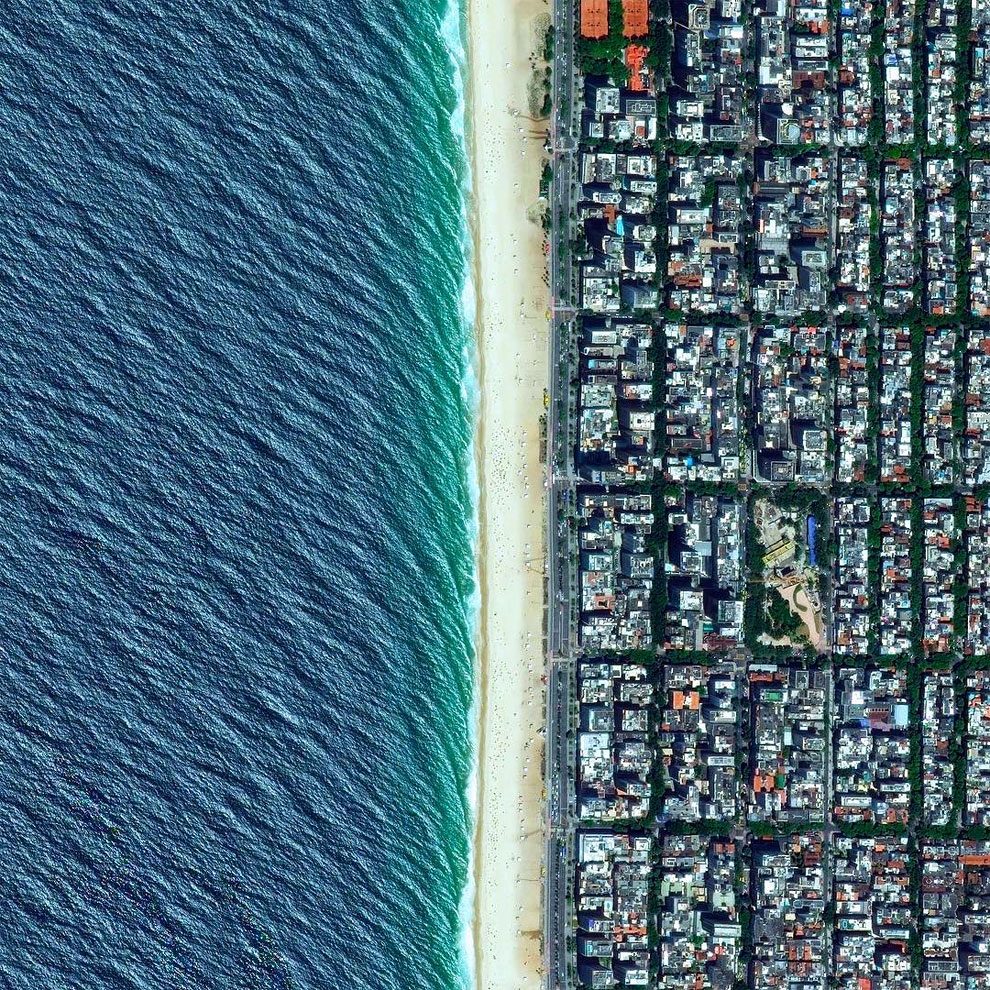 All of the exciting coverage at the Olympics has us thinking of this beautiful Overview of Ipanema Beach in Rio de Janeiro! Frequently recognized as one of the most beautiful beaches in the world, its 2.25 miles of sand are divided into segments by lifeguard towers known as “postos.” 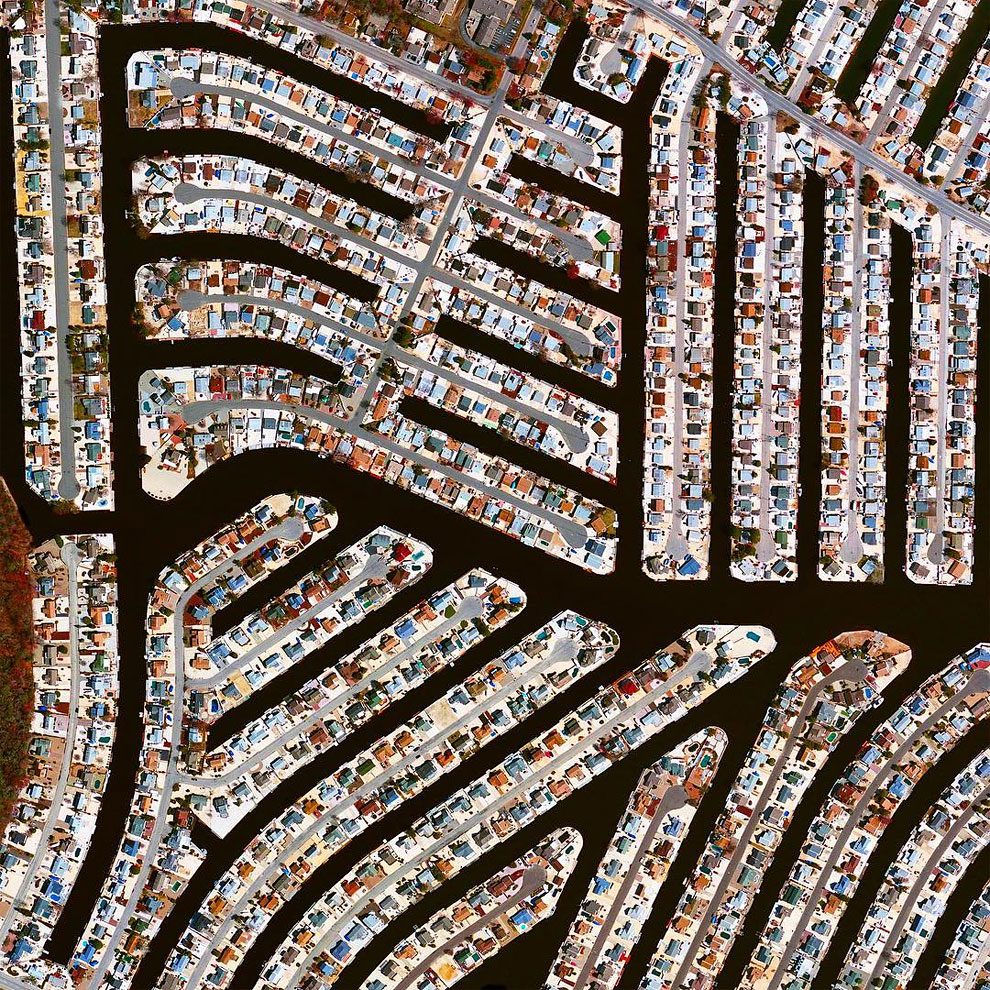 Residential houses are built along canals in Manahawkin, New Jersey, USA. The town’s name is believed to have come from a Lenape word meaning “fertile land sloping into the water.”

25 Beautiful Winning Photographs Of The Northern Lights Contest By “Capture The Atlas”
17 Seriously Intriguing Photographs That Will Trick Your Eyes
Guy And Pug Take Couply Photos Cuz Sometimes Your Dog’s Your Valentine
Photoshoot Imagines The Little Mermaid's Wedding In Real Life
Stunning Photos Of American Women At Work During World War II
Stunning Aerial Photographs Find The “Hidden City” Inside New York City
Beautiful Female Portrait Photography By Caio Borém
One57 Gets Glassy: Photos Of Midtown's Newest Supertall Skyscraper
The Incredibly Talented Photographer Who Takes Gorgeous Photos With A Touch Of Rain
Artist Travels To Scenic Locations Only To Paint The Pattern Of His Own Shirt
Craig Burrows Photographs Plants and Flowers Using an Ultraviolet-Induced Visible Fluorescence Photography Process
Amazing Winners Of The African Wildlife Foundation Photography Awards
Albino Twins From Brazil Are Challenging The Fashion Industry With Their Unique Beauty
Portraits Of Homeless People And Their Dreams Of Old
London Zoo Staff Conduct Their Annual Weigh In For the Animals
Boxers Before And After The Fight: Beautiful Photography Project By Nicolai Howalt
Underwater Giants: The Magnificent Manta Rays of the Maldives
Photograher Captures Photos From The Highest Places In Tokyo Show The Beauty Of The City
Rare Photos Of Melania Trump As A Model At 16-Years-Old In Slovenia
Up All Night By Mariya Novakova: Nighttime Is Beautiful In A Series Of Moody City Snapshot
18 Photos Of America Like You’ve Never Seen It Before
Fantastic Conceptual Photography by Megan Christine
Long Exposure Turn Budapest Trams
25 Iconic Photos Of Rock Stars From The 1960s And 1970s Taken By Henry Diltz
aerial, alter, breathtaking, perception, photos, planet