UK Weather Photographer Of The Year 2016 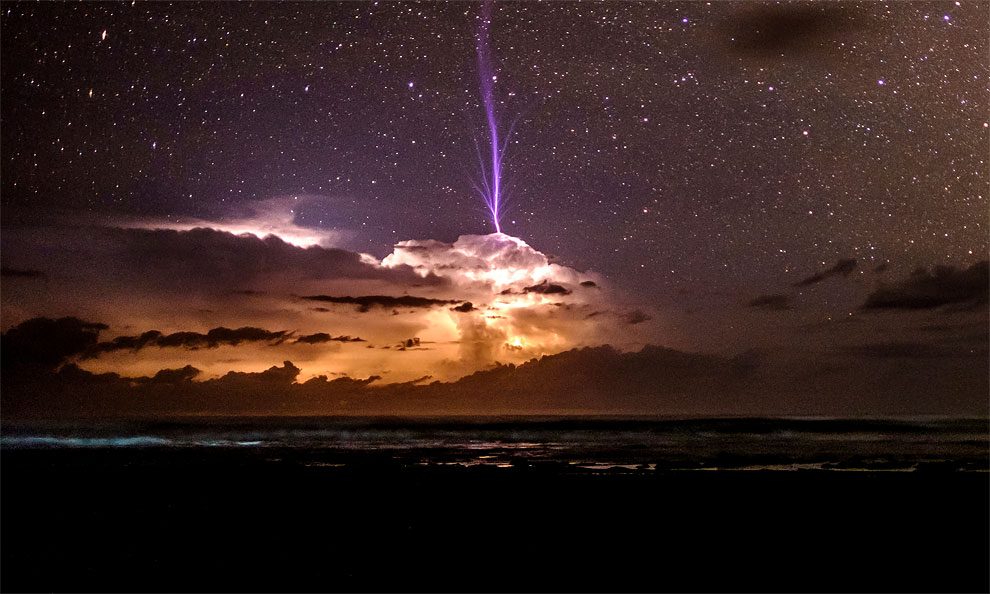 Sprite Lightning by Ben Cherry. “Taken while trying to photograph the milkyway and a pulsing lightning storm for off the coast of Costa Rica on the Pacific side. Midway through the 30 second exposure this shaft of light launched up into the atmosphere, this is called a sprite strike. It was the only one I saw and it was a very special experience”. (Photo by Ben Cherry/Weather Photographer of the Year 2016) 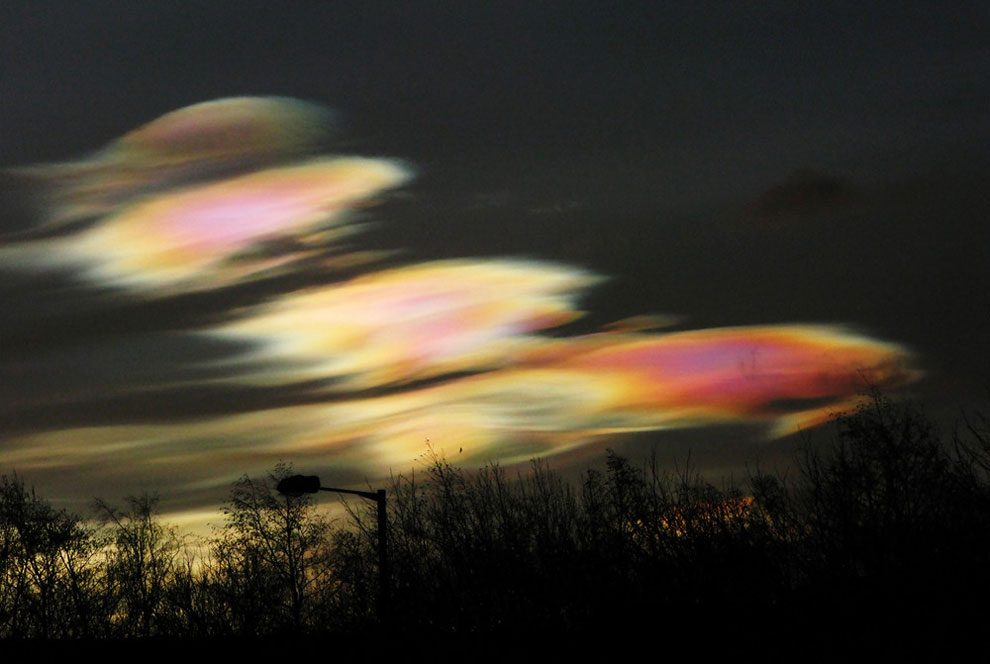 Polar stratospheric clouds by Alan Tough. “In late January, early February 2016, unusually cold Arctic stratospheric air reached down as far as the UK. This triggered sightings of rare and beautiful Polar Stratospheric (Nacreous) Clouds (PSCs). I had to go down to Alloa for a course and took an old compact digital camera with me, just in case any displays were visible from that part of the country. PSCs have a sinister side, though: chemical reactions on the surface of the clouds destroy ozone”. (Photo by Alan Tough/Weather Photographer of the Year 2016) 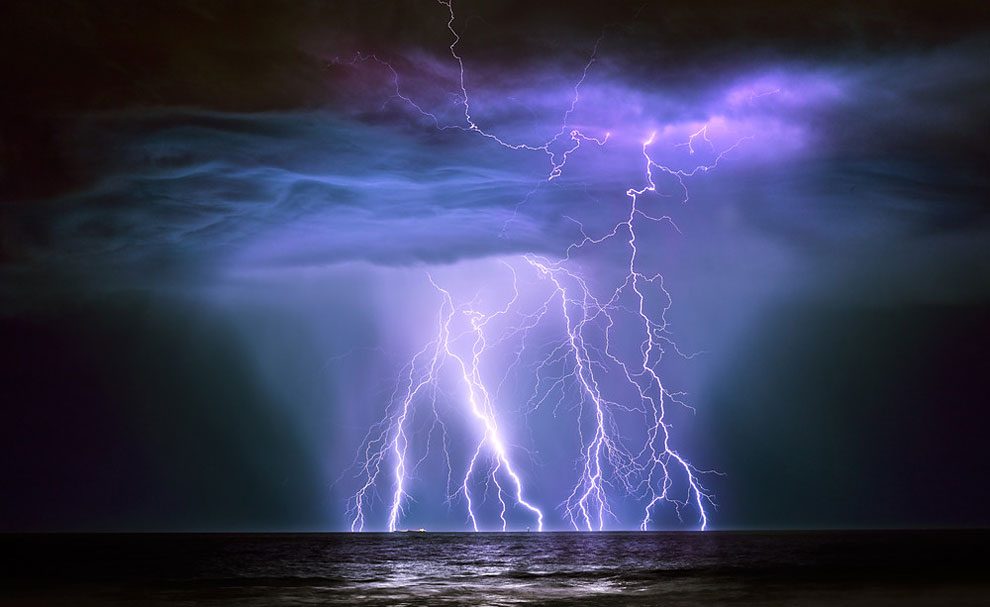 Oil tanker Guanabura hit by lightning, Australia by Graham Newman. “The Guanabra is a 240m-long supertanker and was loaded with crude oil from the Australian north west offshore oil fields at Barrow Island. The ship was approximately 5.3km from the camera when I took the shot at 3.10am. Shortly after taking the shot, the lightning cell closed on my position on the beach and I grabbed up my equipment and ran for my life. I had just closed the car door when the lightning hit close by and took out all the lights in the area”. (Photo by Graham Newman/Weather Photographer of the Year 2016) 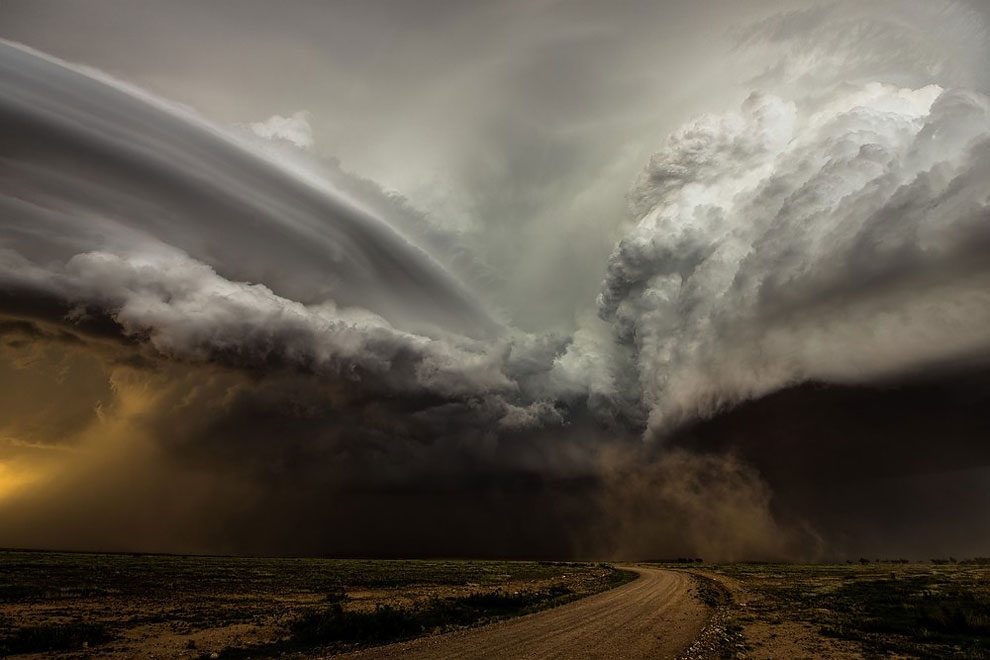 Clash of the storms, New Mexico, US by Camelia Czuchnicki. “A clash between two storm cells in New Mexico, US, each with its own rotating updraft. The curved striations of the oldest noticeable against the new bubbling convection of the newer. It was a fantastic sight to watch and it’s the rarity of such scenes that keep drawing me back to the US Plains each year”. (Photo by Camelia Czuchnicki/Weather Photographer of the Year 2016) 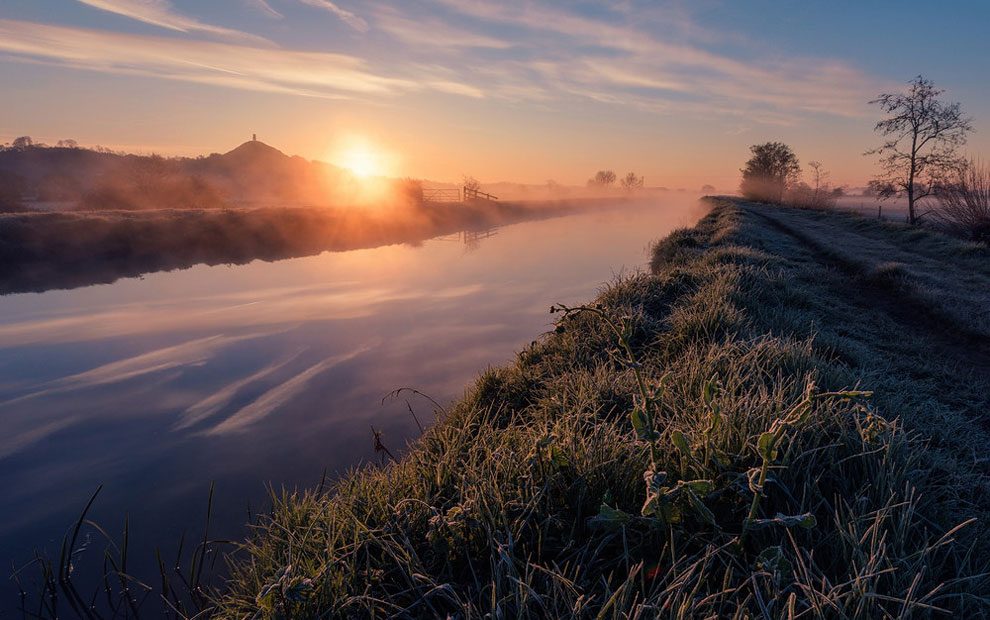 Misty river dawn, Glastonbury by Kevin Pearson. “My image was taken in late April along the bank of the river Brue in Glastonbury, Somerset. The flat, open, exposed landscape of the Somerset levels is punctuated by drainage channels and waterways, which give it a unique character. Cool evenings when followed by clear mornings tend to give rise to a blanket of mist rising off the water and grassland, creating an ethereal feel to the landscape, especially at sunrise before the mist burns away. You can see the frost still clinging to the grassy riverbank”. (Photo by Kevin Pearson/Weather Photographer of the Year 2016) 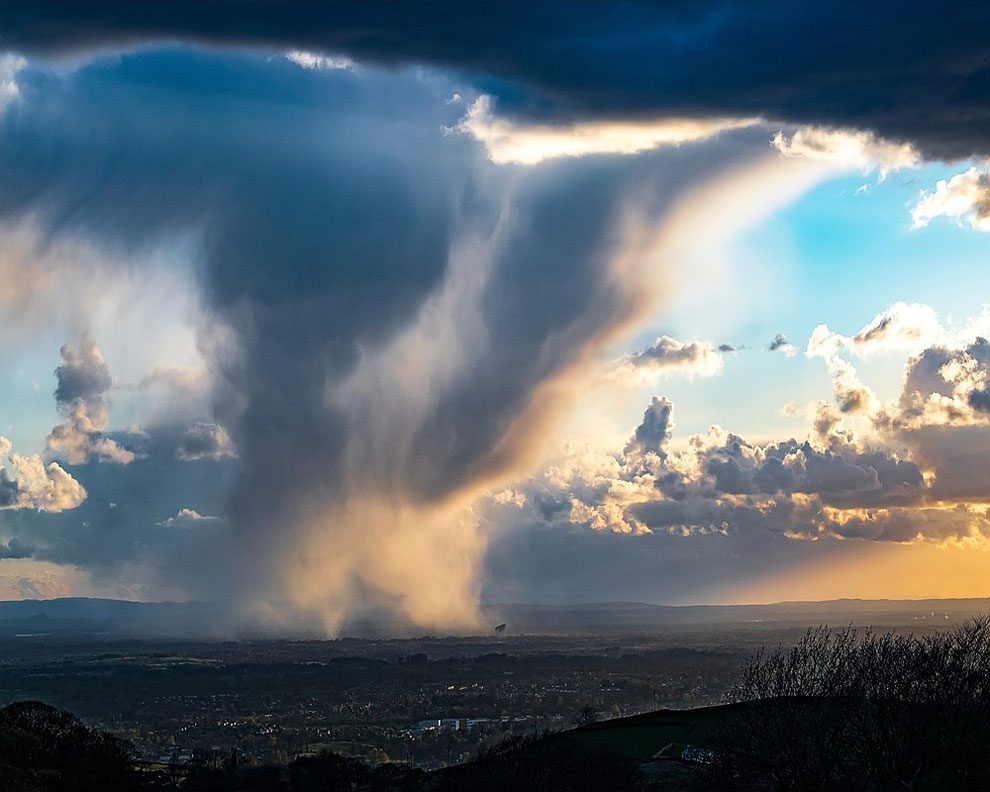 Hail shower over Jodrell Bank by Mark Boardman. “This picture was taken in April from the edge of Macclesfield Forest looking west across Macclesfield towards the radio telescope at Jodrell Bank and beyond. The weather was cold and a north-westerly wind blew this shower of hail to engulf the telescope. The setting sun gives a warm glow to the end of a cold day”. (Photo by Mark Boardman/Weather Photographer of the Year 2016) 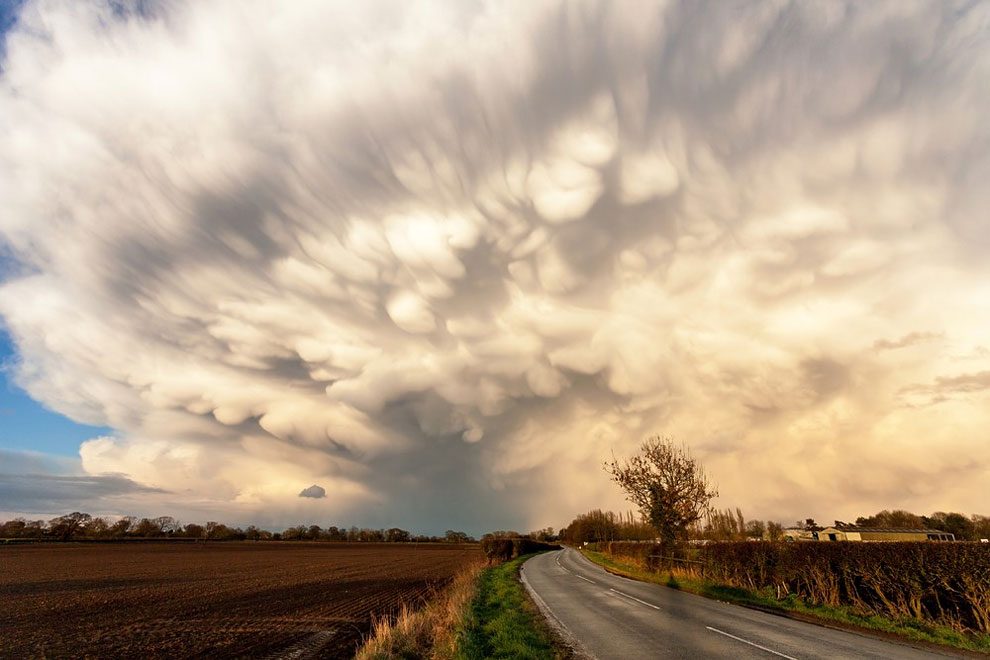 Storm clouds over Yorkshire by Mat Robinson. “This image was taken on a journey back to York after a miserable weekend in the Midlands. Having followed this storm and been temporarily underneath it over the 80 miles up the A1, we finally found ourselves following it, with the setting sun illuminating the mammatus clouds on its back edge. This was taken at the first layby we found on between Tadcaster and York, away from the A64, with the sweep of the road acting as a guide for the eye towards the centre of the storm. How could you not grab the camera from the boot and photograph this scene? ”. (Photo by Mat Robinson/Weather Photographer of the Year 2016) 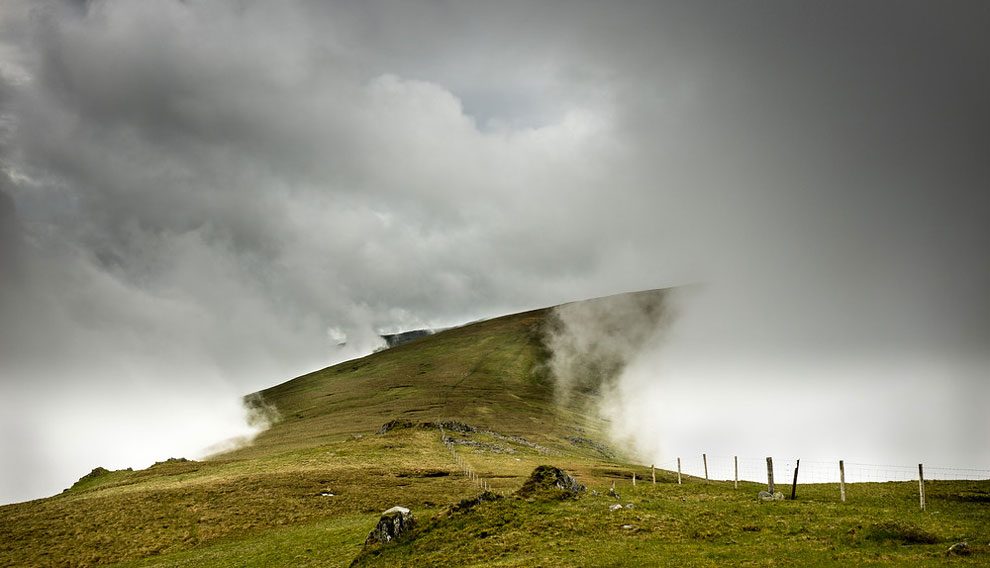 Cloud tunnel, Carneddau, north Wales by Steve M. Smith. “Barometric pressure was high, clear weather was forecast. On the hills we were shrouded until late morning when a clear way emerged along the ridge towards Foel Fras in the Carneddau”. (Photo by Steve M. Smith/Weather Photographer of the Year 2016) 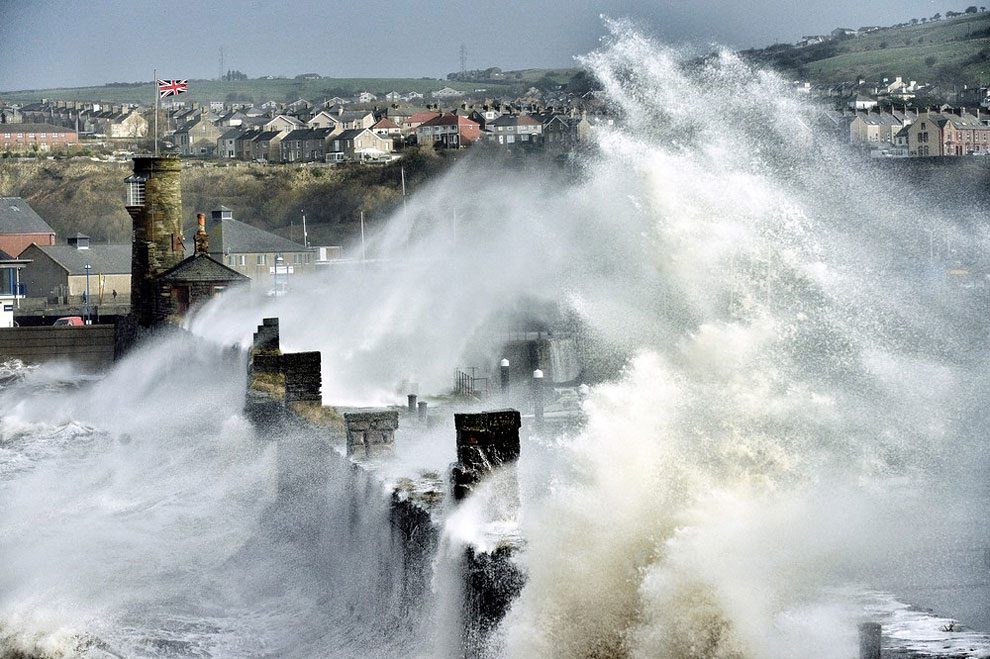 Winner public vote: Monster waves at Whitehaven by Paul Kingston. “Inner harbour wall at Whitehaven, Cumbria, being hit by a monstrous wave, dwarfing the surrounding manmade structures. This occurred on the day I travelled from County Durham to the west coast of Cumbria when the UK was being hit by a series of Atlantic storms sending tidal surges and strong gale force westerly winds”. (Photo by Paul Kingston/Weather Photographer of the Year 2016) 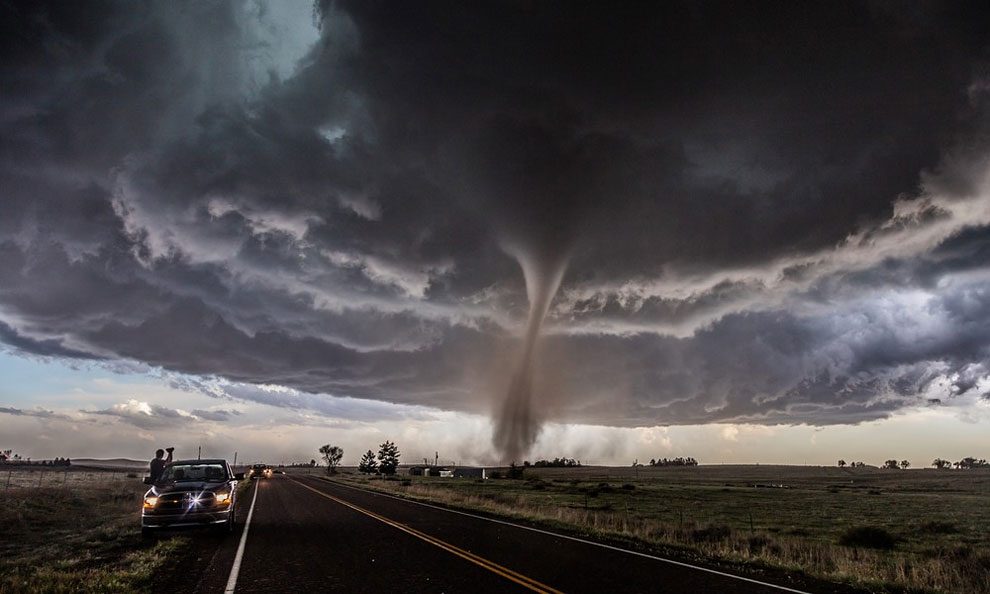 Overall winner: Tornado on show, Colorado by Tim Moxon. “A classic severe weather setup in the high plains of Colorado near the town of Wray yielded one of the most photogenic tornadoes of the year. We were just ahead of the storm as the tornado started and tracked with it as it grew from a fine funnel to a sizeable cone tornado. At this moment, the twister was at its most photogenic. We were among a number of people, including those you see in the shot, nervously enjoying the epic display nature put on for us”. (Photo by Tim Moxon/Weather Photographer of the Year 2016)

Thoughts, Hopes And Disappointments in Kyiv: A Street Photographer’s Photos of Ukraine, 2001-2021
Lay's Summer Days Promotion Puts Your Fav Summer Photo An A Bag Of Chips
15 Wonderfully Satisfying Photographs to Put Your Tired Mind to Rest
Abandoned As A Baby Due To Albinism, Xueli Grew Up To Become A Vogue Model
Shot Face: Photographer Captures Cool Pictures Of People Doing Shots
My Little Friends: Photographer Captures Drops Of Water Reflecting Various Images Beyond
Spectacular Winning Images from The Wildlife Photographer of The Year 2020
Photographer Bleron Çaka Captures Minimalist And Natural Landscapes
Photographer Explores The Artefacts of Abandoned Former USSR Sites
New York Secret Rooftop World
Dreamy and Cinematic New York City Photographs by Dimitri Guédé
"Belfast Kids": Photographer Dave Sinclair Shows Us the Faces and Lives of Children in The City Affected by Social and Political Change and Upheaval
Going Down The London Underground In The Later 1980s
Photographer Michael Massaia Captures Haunting Images Of Central Park When No One Is Around
British Wildlife Photography Awards 2016 Winners
Spectacular Winning Photos Of The Astronomy Photographer Of The Year 2018 Contest
Beautiful Photos of Jane Birkin at Home Taken by Jean-Claude Deutsch in 1971
Photographer Spent 12 Years Taking Pictures Of The Foetus Developing In The Womb
If The Moon Were Replaced With Some Of The Planets From Our Solar System
Wait, What? The Spectacular Winning Images of the Potato Photographer of the Year 2021!
British Wildlife Photography Awards 2014 Winners
In the Days Before Fridges: Vintage Photographs Show Butcher Shop Fronts In The Victorian Era
Spectacular Winning Photos Of The National Geographic 2018 Photo Contest
Woman Stages Very Intimate Postpartum Photo Shoot To Build Back Her Body Confidence After Having 3 Babies In One Year
photographer, weather