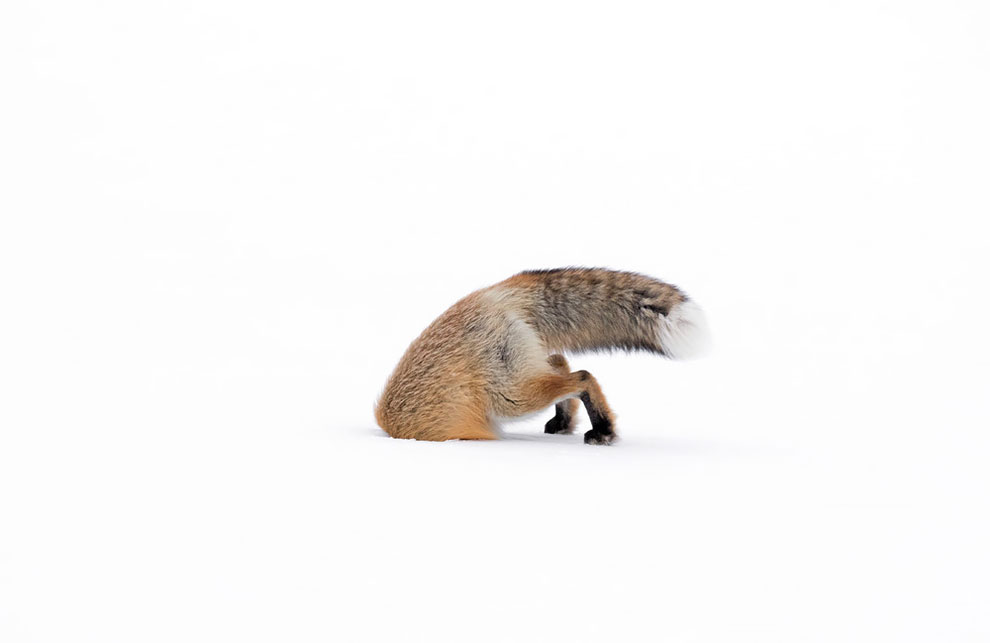 Deep snow had blanketed the Lamar valley in Yellowstone national park, Wyoming, and the day was cold and overcast. This female American red fox was hunting beside the road, stepping quietly across the crusty surface of the snow. The image, says Ashleigh, “illustrates the harsh reality of winter life in Yellowstone”. (Photo by Ashleigh Scully/Wildlife Photographer of the Year 2017) 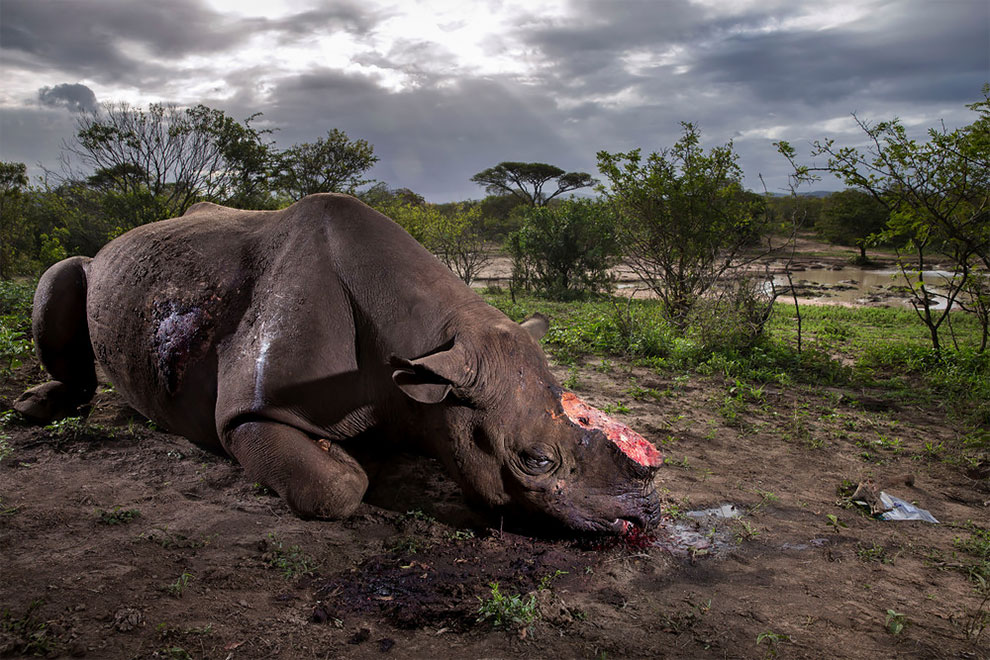 The killers were probably from a local community. Entering the Hluhluwe Imfolozi game reserve at night, they shot the black rhino bull using a silencer. Working fast, they hacked off the two horns and escaped. The horns would have been sold to a middleman and smuggled out of South Africa to China or Vietnam. (Photo by Brent Stirton/Wildlife Photographer of the Year 2017) 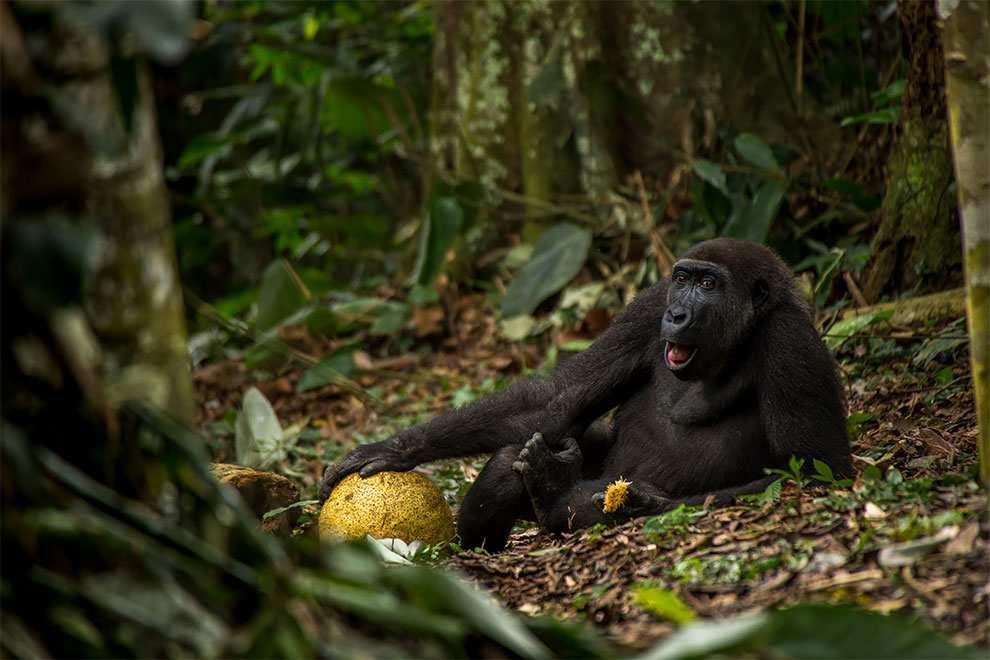 Daniel met Caco in Odzala national park in the Republic of Congo. Here, Caco is feasting on a fleshy breadfruit. He is about nine years old and preparing to leave his family. Western lowland gorillas are critically endangered, threatened by illegal hunting for bushmeat, disease (notably the Ebola virus), habitat loss and the impact of climate change. (Photo by Daniel Nelson/Wildlife Photographer of the Year 2017) 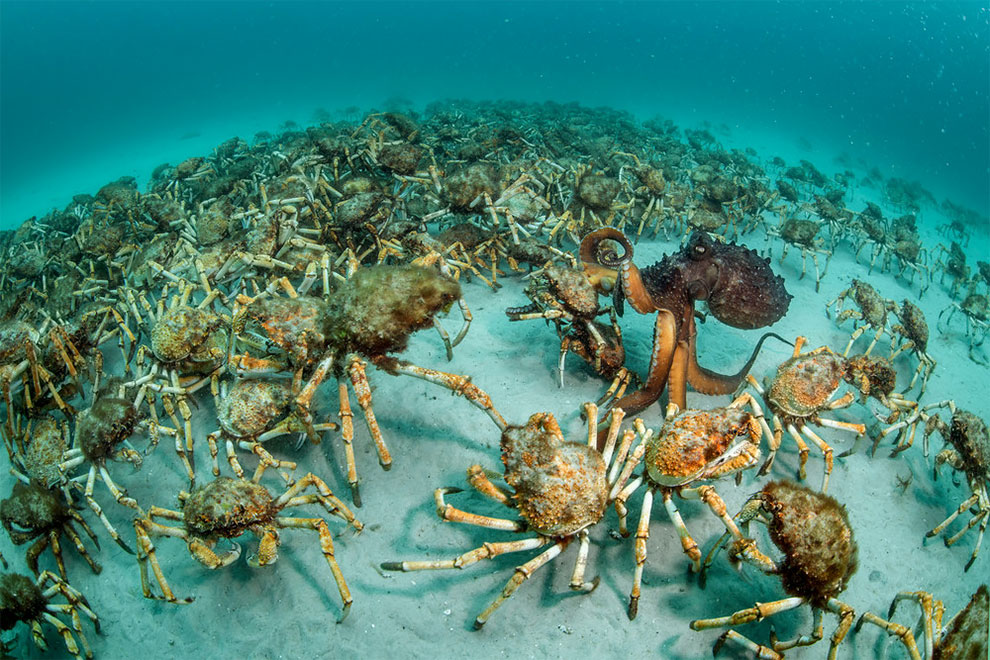 Out of the blue, an aggregation of giant spider crabs the size of a football field wandered past. Justin was documenting a University of Tasmania kelp transplant experiment and was taken by surprise. A Maori octopus seemed equally delighted with the unexpected bounty. It was having trouble choosing and catching a crab. Luckily for Justin, the stage was set with clear water and sunlight reflecting off the sand. (Photo by Justin Gilligan/Wildlife Photographer of the Year 2017)

10 years and under category. The Grip of the Gulls by Ekaterina Bee, Italy. 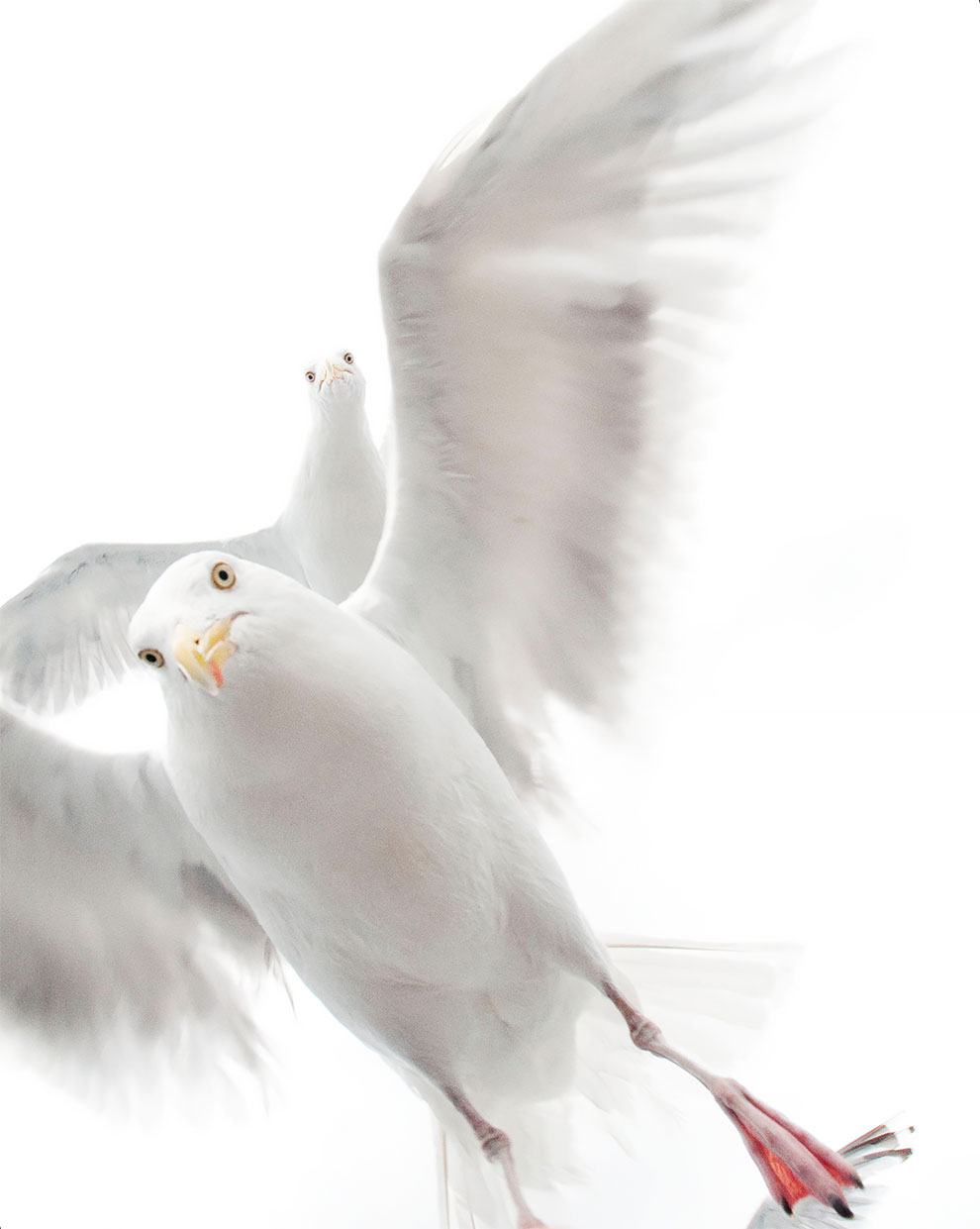 Like all her family, five-and-a-half-year-old Ekaterina is fascinated by nature. On a boat trip off the coast of central Norway, her focus was on the cloud of herring gulls. They were after food, and as soon as Ekaterina threw them bread, they surrounded her. She liked the expression of the bird furthest away: “It looked very curious, as if it was trying to understand what was happening on the boat”. (Photo by Ekaterina Bee/Wildlife Photographer of the Year 2017) 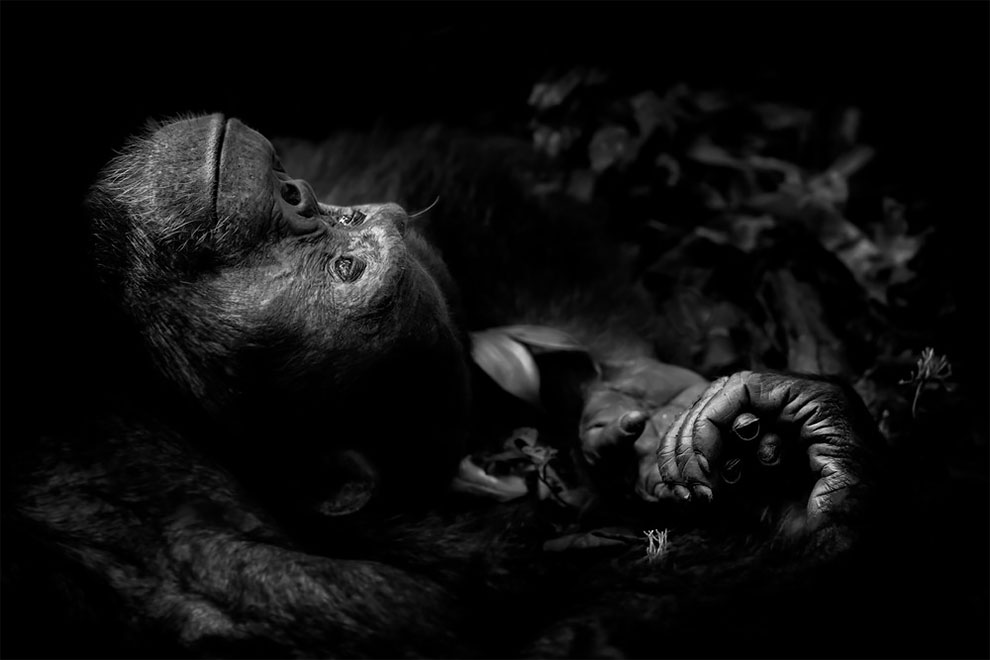 Peter had spent a long, difficult morning tracking chimpanzees – part of a troop of some 250 – through Uganda’s Kibale national park. Totti was busy with vigorous courtship, pacing and gesticulating for a female in the canopy. It was only when he finally flopped down, worn out with unrequited love, that Peter had his chance. (Photo by Peter Delaney/Wildlife Photographer of the Year 2017) 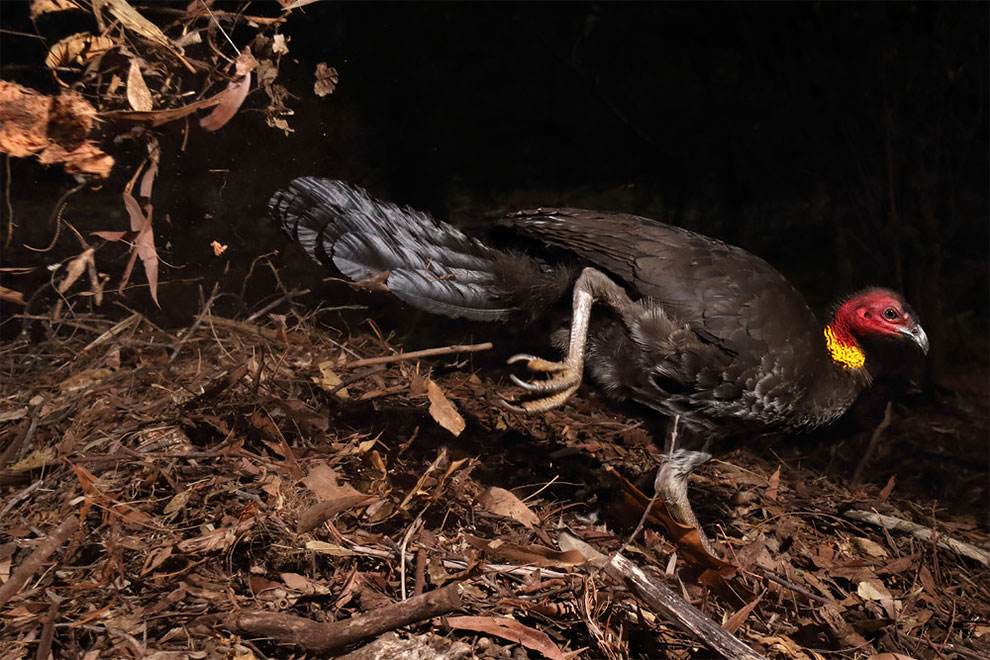 Most birds incubate their eggs with their bodies. Not so the Australian brush turkey, one of a handful of birds – the megapodes – that do it with an oven. Only the males oversee incubation. In this case, a male had chosen to create his nest-mound near Gerry’s home in Sydney, bordering Garigal national park. If he and his mound were to females’ liking, they would lay a clutch of eggs inside. In this picture, he is piling on more insulation to raise the temperature. (Photo by Gerry Pearce/Wildlife Photographer of the Year 2017) 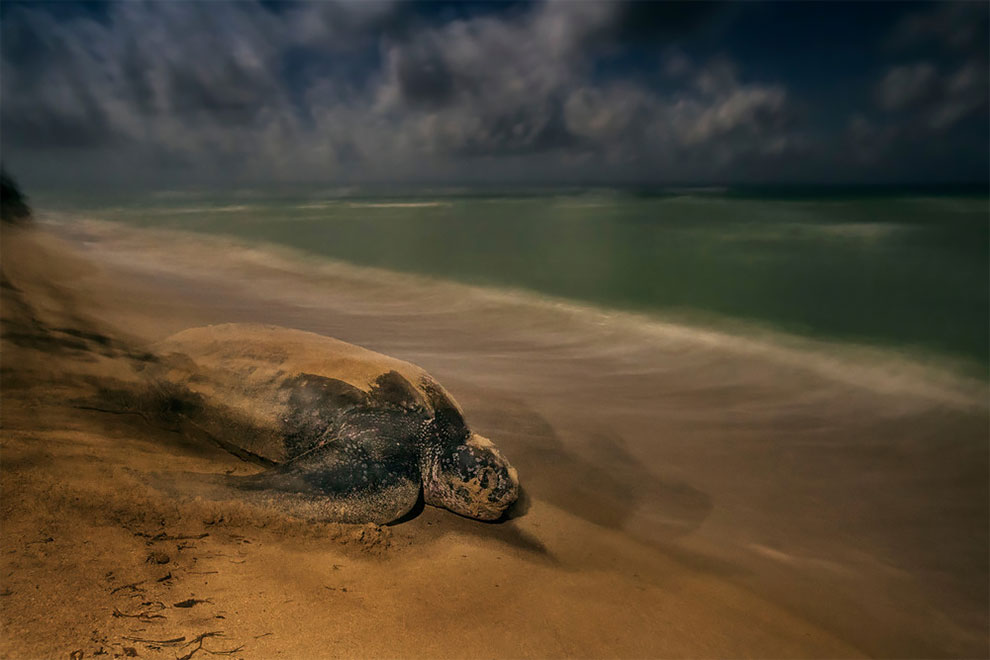 Like generations before her, the leatherback turtle moves steadily back to the ocean. Leatherbacks are the largest, deepest-diving and widest-ranging sea turtles. Much of their lives are spent at sea, shrouded in mystery. When mature, females return to the shores where they themselves hatched to lay their own eggs. Sandy Point national wildlife refuge on St Croix, in the US Virgin Islands, provides critical nesting habitat. (Photo by Brian Skerry/Wildlife Photographer of the Year 2017)

Animals in Their Environment category. The Night Raider by Marcio Cabral, Brazil. 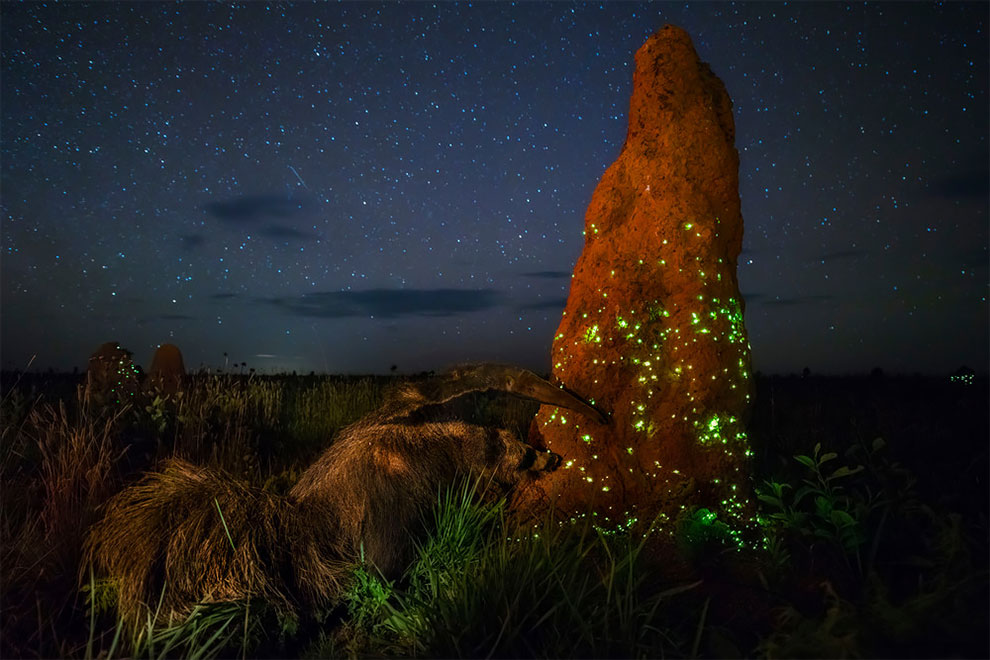 For three seasons, Marcio had camped out in Brazil’s Cerrado region, on the vast treeless savannah of Emas national park, waiting to capture the termite mounds’ light display. Click beetle larvae living in the outer layers of the mounds flash their bioluminescent “headlights” to lure in prey – the flying termites. Out of the darkness ambled a giant anteater, oblivious of Marcio in his hide, and began to attack the tall, concrete-mud mound with its powerful claws to reach the termites deep inside. (Photo by Marcio Cabral/Wildlife Photographer of the Year 2017) 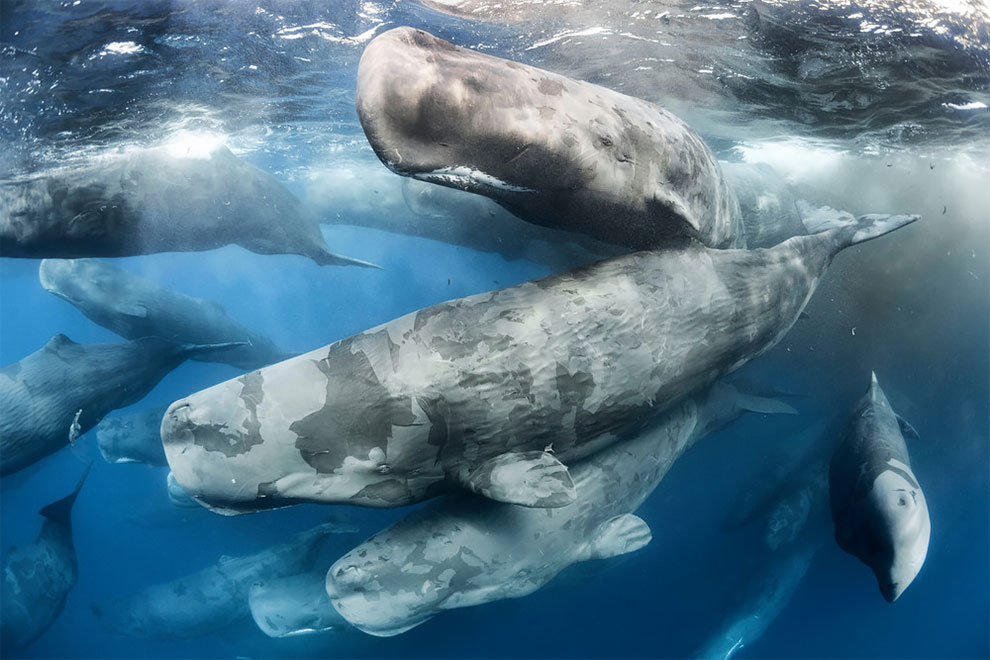 Dozens of sperm whales mingled noisily off Sri Lanka’s northeast coast, stacked as far down as Tony could see. This was a congregation of dozens of social units, like a gathering of the clans. Aggregations like this could be a critical part of the whales’ rich social lives but are rarely reported. Some two thirds of the population was wiped out before commercial whaling was banned in 1986. This kind of major gathering could be “a sign that populations are recovering”, says Tony. (Photo by Tony Wu/Wildlife Photographer of the Year 2017) 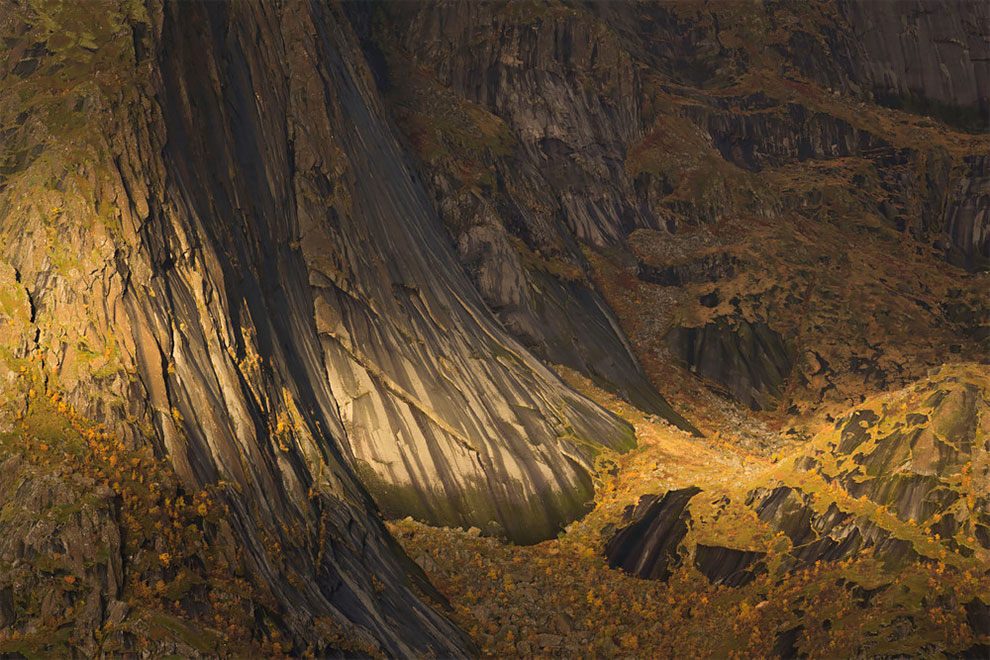 Dorin was in Hamnøy in the Lofoten islands, Norway, when the clouds parted, allowing shafts of sunlight to fall on to the great walls of metamorphic rock, lighting up the swathes of vegetation coating the canyon and its slopes. The mountains here rise steeply from the sea yet mountain birches manage to gain a foothold. This mountain variety of downy birch is relatively small, and here in its autumn colours, is glowing gold. (Photo by Dorin Bofan/Wildlife Photographer of the Year 2017) 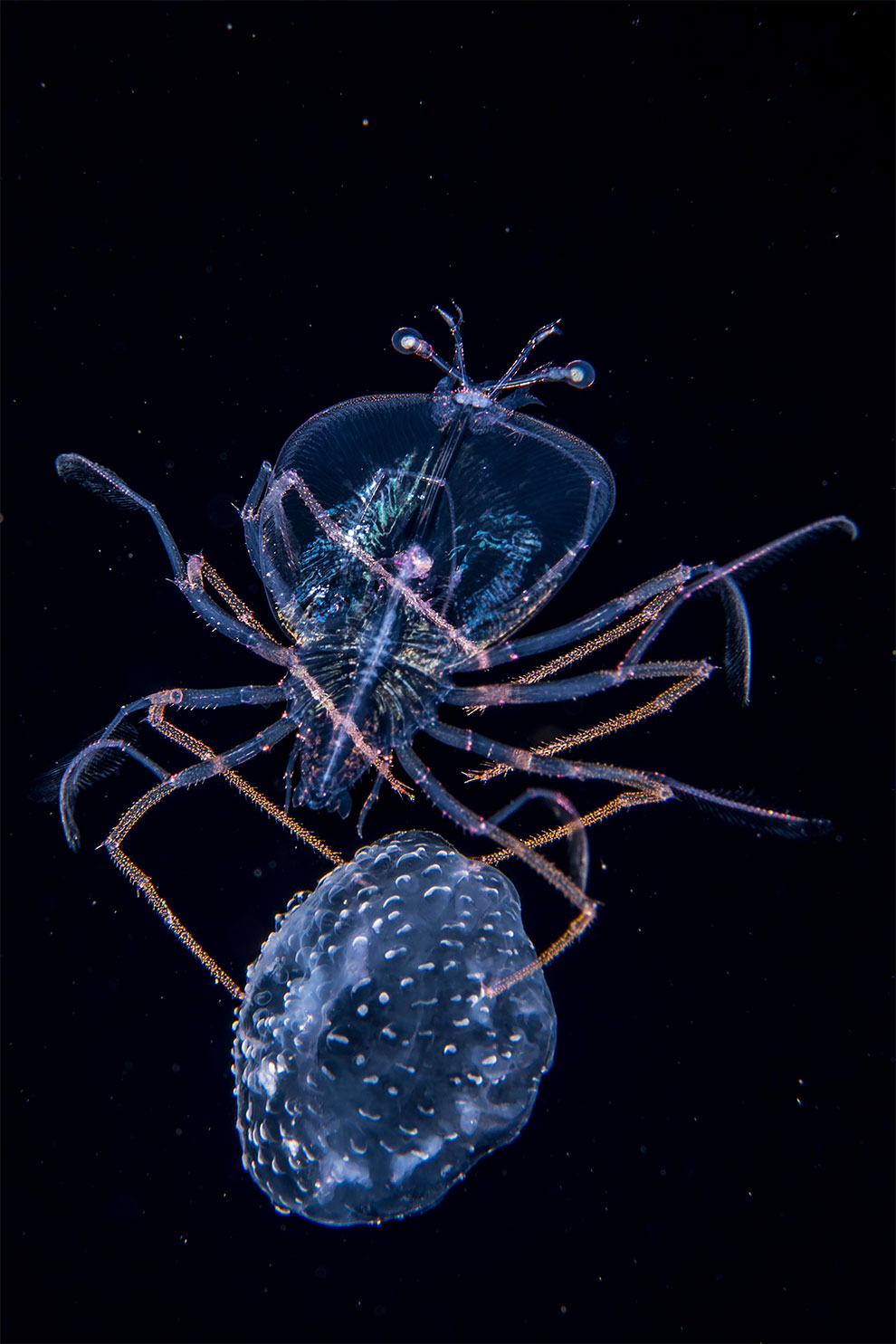 In open ocean far off Tahiti, French Polynesia, Anthony regularly dives at night in water more than 2km (1.2 miles) deep. His aim is to photograph deep-sea creatures – tiny ones that feed on plankton. This lobster larva, at the phyllosoma stage, just 1.2cm across, was gripping the dome of a small mauve stinger jellyfish. The pair were drifting in the current, but the phyllosoma also seemed able to steer the jelly. (Photo by Anthony Berberian/Wildlife Photographer of the Year 2017) 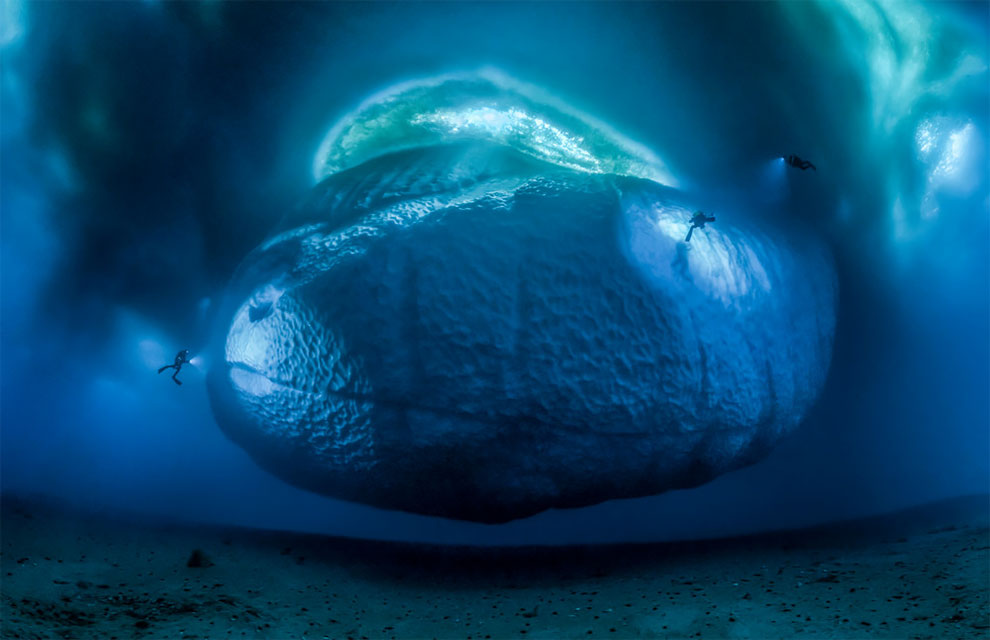 Laurent and his expedition team were working out of the Dumont d’Urville scientific base in east Antarctica. Ice shelves in the East Antarctic ice sheet are melting faster than scientists assumed. When Laurent spotted this small iceberg, he saw the chance to show for the first time the underwater part. It took three days to check the location, install a grid of lines from the seabed to buoys (so that Laurent could maintain a definite distance) and take the series of pictures to capture the scene. (Photo by Laurent Ballesta/Wildlife Photographer of the Year 2017) 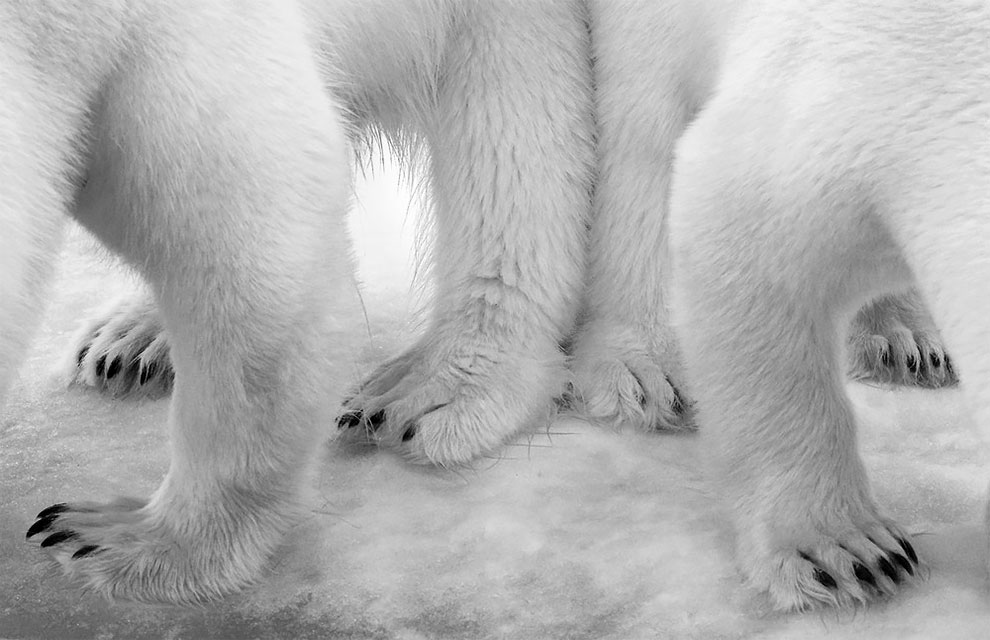 From her ship anchored off Svalbard, in Arctic Norway, Eilo spotted a polar bear and her two- year-old cub in the distance, slowly drawing closer. Nearing the ship, they were diverted to a patch of snow soaked in leakage from the vessel’s kitchen and began to lick it. “I was ashamed of our contribution to the immaculate landscape,” says Eilo, “and of how this influenced the bears’ behaviour”. (Photo by Eilo Elvinger/Wildlife Photographer of the Year 2017) 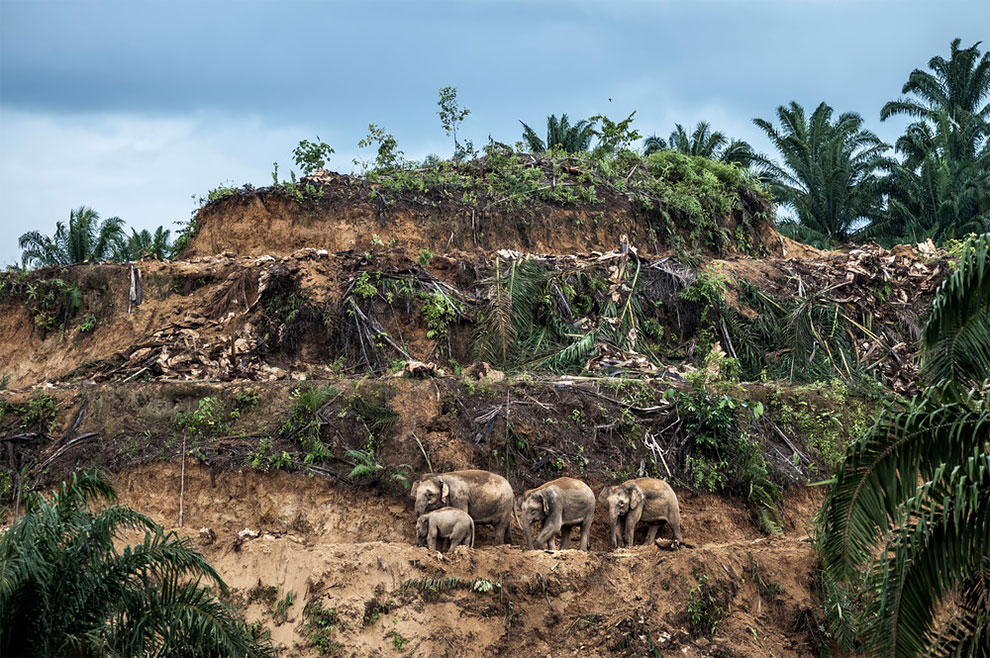 On the island of Borneo, three generations of Bornean elephants cross the terraces of an oil-palm plantation being cleared for replanting. In the Malaysian state of Sabah, where most rainforest has been logged, the palm-oil industry is still a major driver of deforestation, squeezing elephants into smaller pockets of forest. Increasingly they come into conflict with humans, with elephants being shot or poisoned, and attacks on humans are also on the rise. (Photo by Aaron “Bertie” Gekoski/Wildlife Photographer of the Year 2017)