“Under”: Europe’s First Underwater Restaurant To Open In Norway 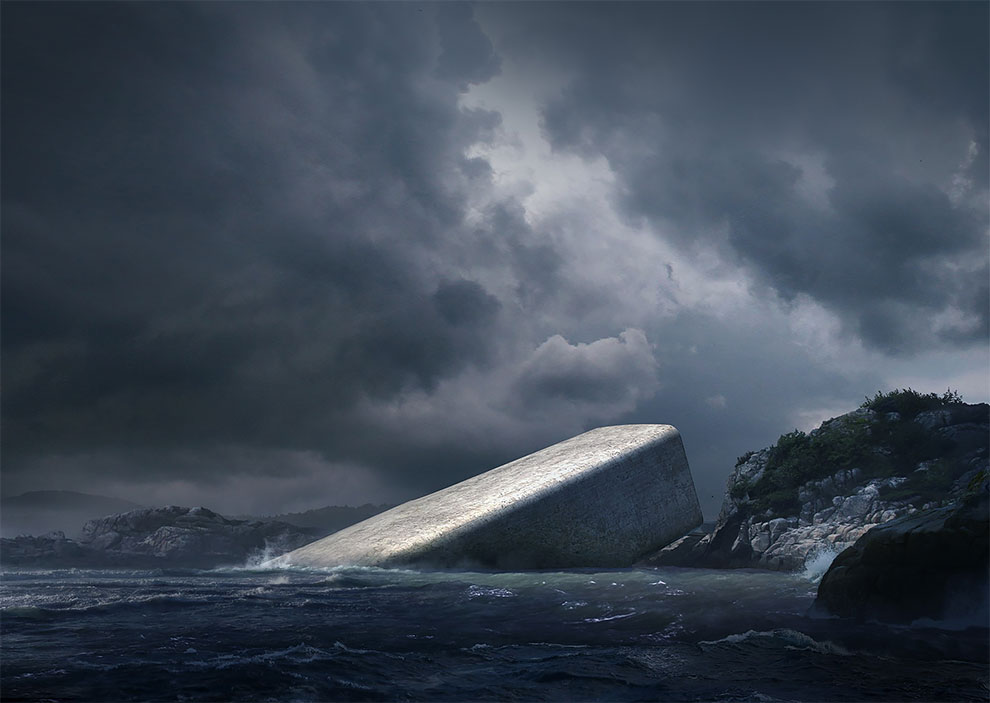 At the southernmost point of the Norwegian coastline by the village of Båly, Snøhetta has designed Europe’s very first underwater restaurant. With its immediate proximity with the forces of nature, the restaurant, which will also function as a research center for marine life, is a tribute to the Norwegian coast and to Lindesnes – to the wild fauna of the sea and to the rocky coastline of Norway’s southern tip.

Under’s namesake holds a double meaning: In Norwegian, “under” can just as well be translated into “wonder.” Half-sunken into the sea, the building’s monolithic form breaks the water surface to lie against the craggy shoreline. More than an aquarium, the structure will become a part of its marine environment, coming to rest directly on the sea bed five meters below the water’s surface. With meter-thick concrete walls, the structure is built to withstand pressure and shock from the rugged sea conditions. Like a sunken periscope, the restaurant’s massive acrylic windows offer a view of the seabed as it changes throughout the seasons and varying weather conditions.

Through its architecture, menu and mission of informing the public about the biodiversity of the sea, Under will provide an under-water experience inspiring a sense of awe and delight, activating all the senses – both physical and intellectual. 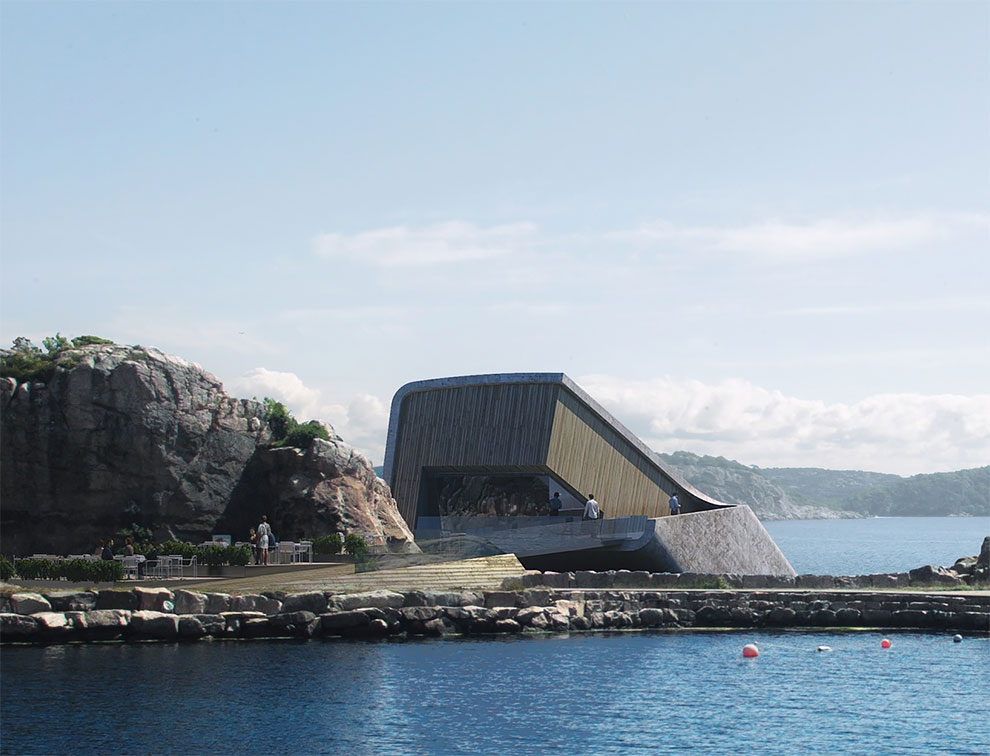 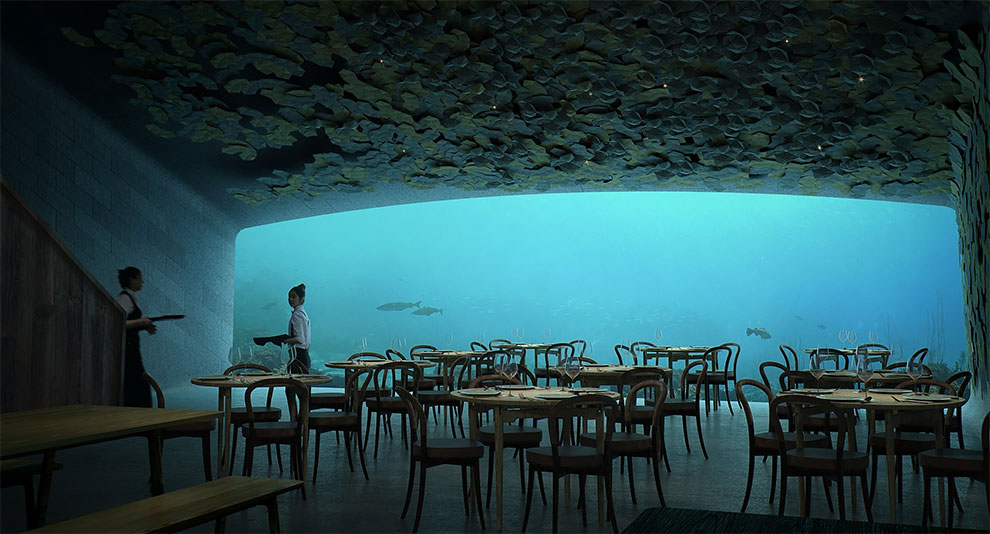 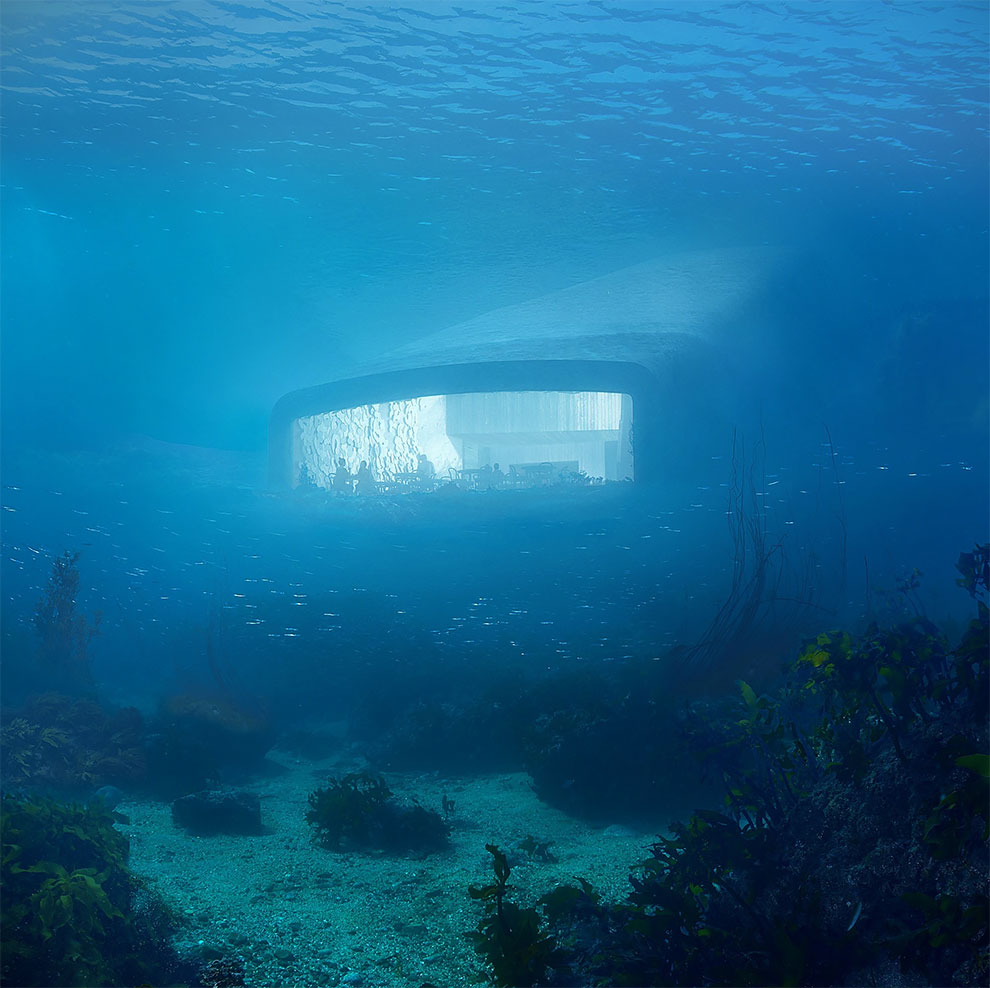 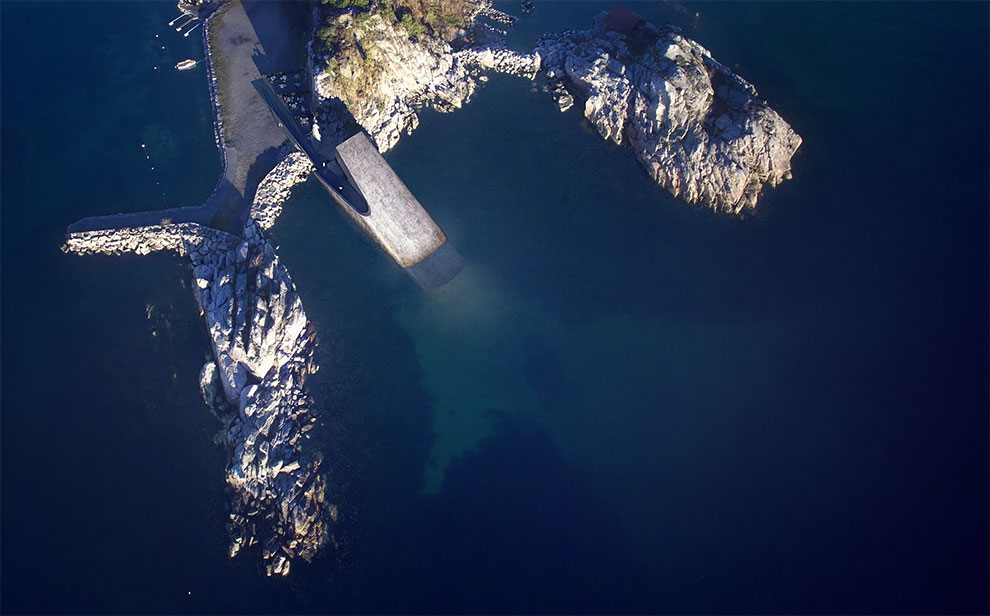 Container Community for Migrant Children
Is this New Hotel in Amsterdam the “Hotel of the Future”?
Shopping Mall Interior by Agence Search
The World's Largest Cruise Ships: A Look Inside
Stunning Images Of The Psychiatric Clinic In Greenland
Colorful Lines, Inspired By The London Underground, Will Lead You To Classrooms At This Language School
Jakarta Built A Surburban Village On Top Of A City Mall
15 Inhumane Ways Cities Are Preventing The Homeless From Sleeping In Public Places
Incredible And Futuristic Bookstore-Themed Shopping Mall In China
This Ingenious Couple Built The House Of Their Dreams — And It’s Amazingly Small!
Architecture And Fantasy In Brutalist France
The Safe House
These Playhouses Are Inspired By Japanese Architecture
This Unique New Bookstore In China Is Filled With Optical Illusions
Graphic Designers Remade Old Buildings Around The World By Using Trends Of The 21st Century
Architects Adds Treetop Cabin With Stargazing Net To Sweden's Treehotel
The Incredible 'Unbalanced Hotel' to be Built into the Side of a Cliff in Peru
Stunning Photos Of The Notre Dame Cathedral Covered By Sandbags During The World War I
An Optical Illusion Bookstore in China
Urbanization in Medellin, Colombia
This Serene Outdoor Sanctuary Has Sculptural Concrete Seating
Transparent Heart-Stopping Glass Sky Slide Starts Trial Runs In North China
Mortsafe: Protection from the Living Dead
The Kingdom of Ice in Romania
USA Architecture: From Ziggurat to Diners
This House Don't Look Like Anything Special, But When You Go Inside...
The Finalists For The 2017 Art Of Building Photography Awards
This Illuminated Arch Rises Up Out Of The Water And Surrounds A Foot Bridge In Texas
This Artist Spent 10 Years Carving A Giant Cave – Alone With His Dog
This Instagram Account Dedicated To... Japanese Water Towers
europe, first, norway, restaurant, under, underwater