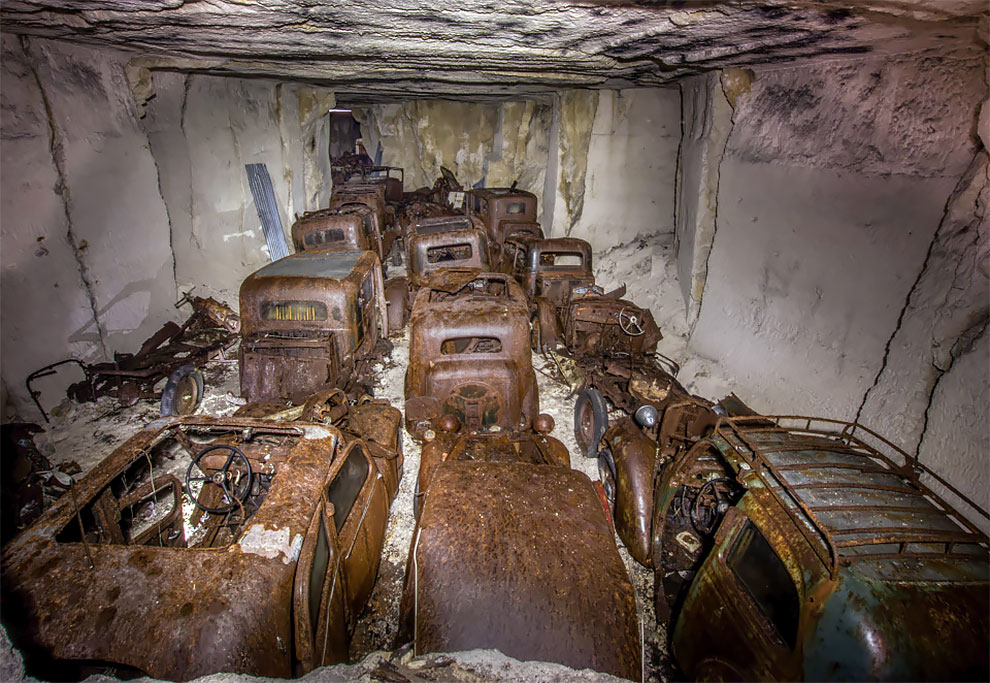 For nearly 80 years these cars have been hidden underground in a quarry in France but they were uncovered by Belgian PE teacher Vincent Michel in 2016. The cars were hidden away during World War II and after the war ended they were never removed.

It is thought the rusting collection was hidden to avoid it being captured by German soldiers.

“We suppose the cars were brought into the quarry at the start of the war to stop them being seized,” Vincent said. “After the war, nobody took them out from there, forgotten forever. The owner of the quarry added a few more cars some years later. Almost all the cars were empty, with the shells the only things remaining.”

Amazing photographs show the rows of cars neatly parked in their underground hideaway. Vincent revealed that since his discovery some cars had been taken out by the quarry owner to sell at auction, but many that are too fragile to move still remain in the quarry. 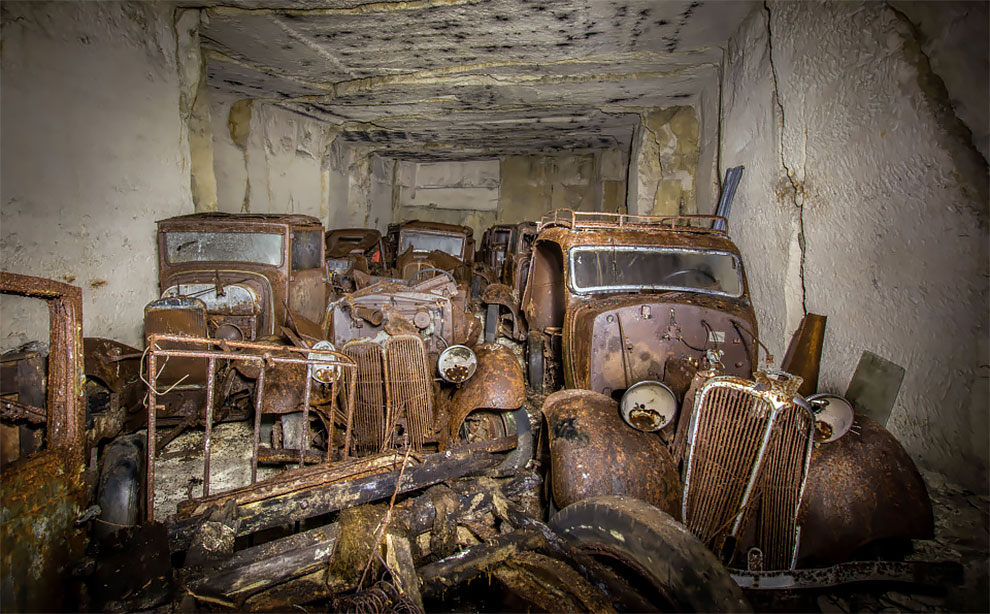 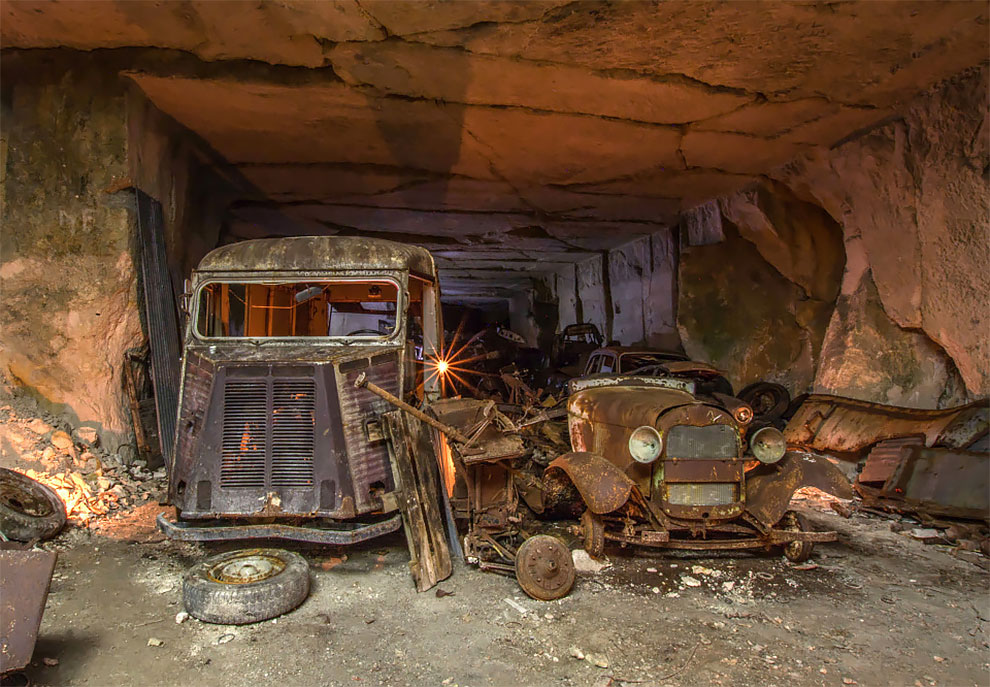 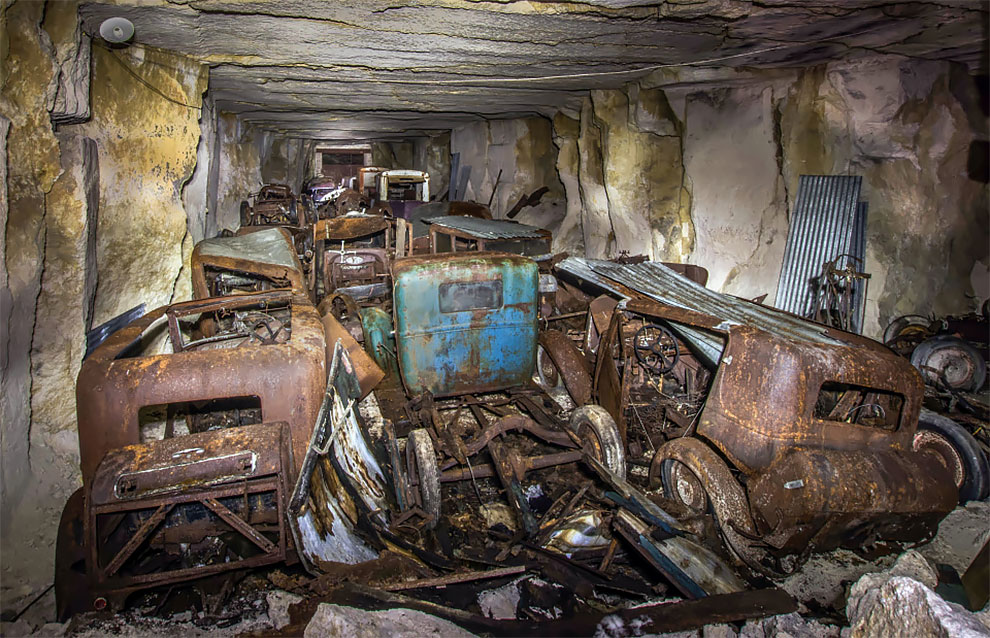 Rusted vehicles have been stowed away for nearly 80 years 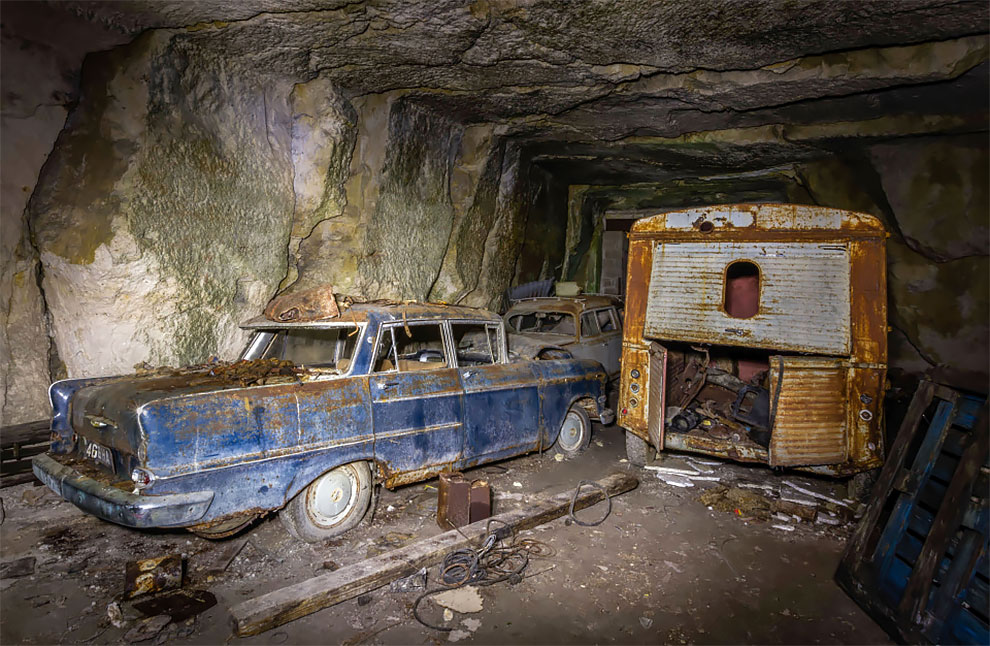 Most of the cars have remained untouched since they were hidden 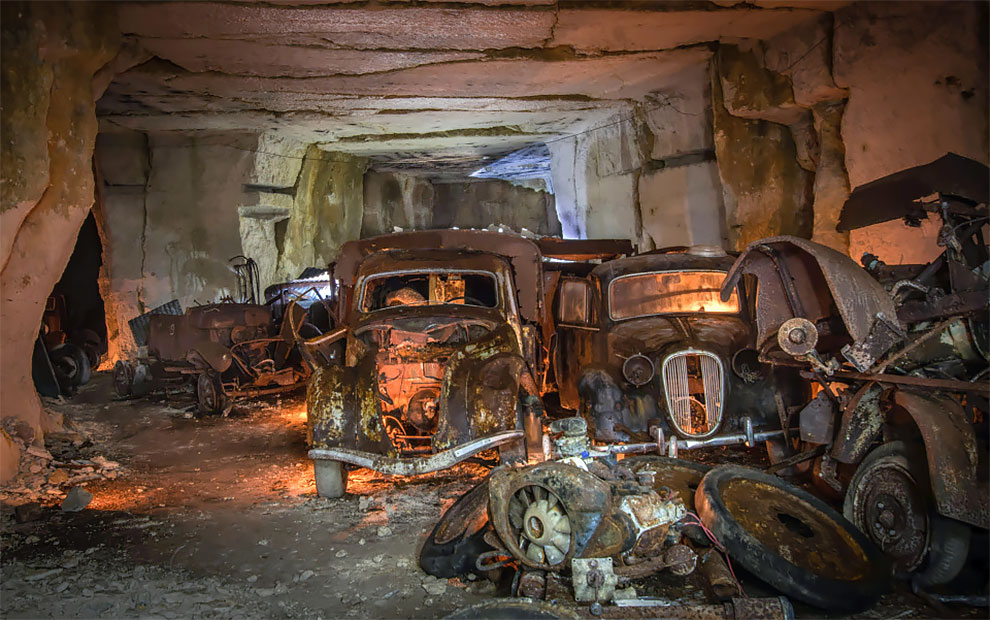 Quarry is jam-packed with rusting motors 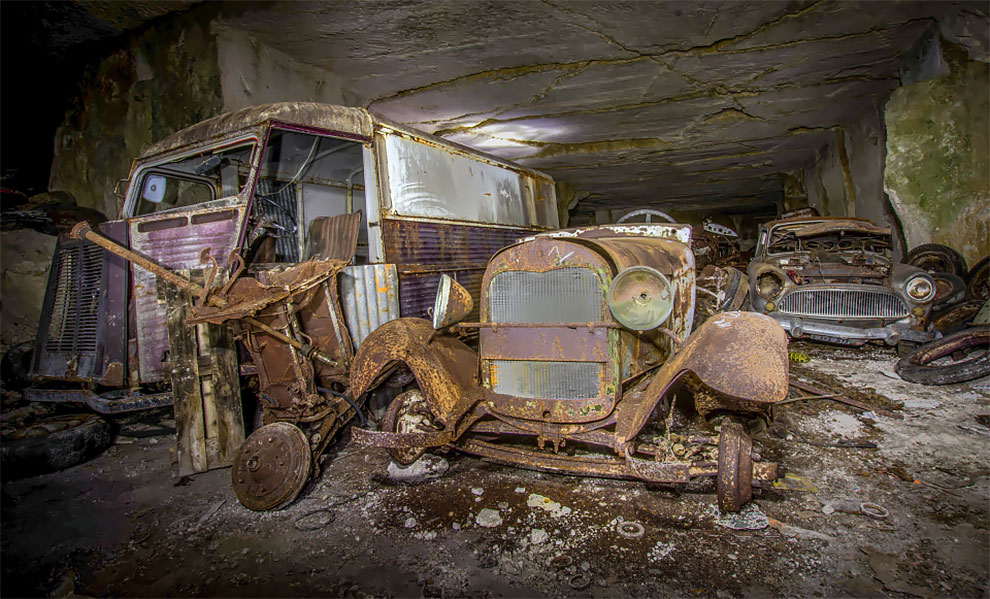 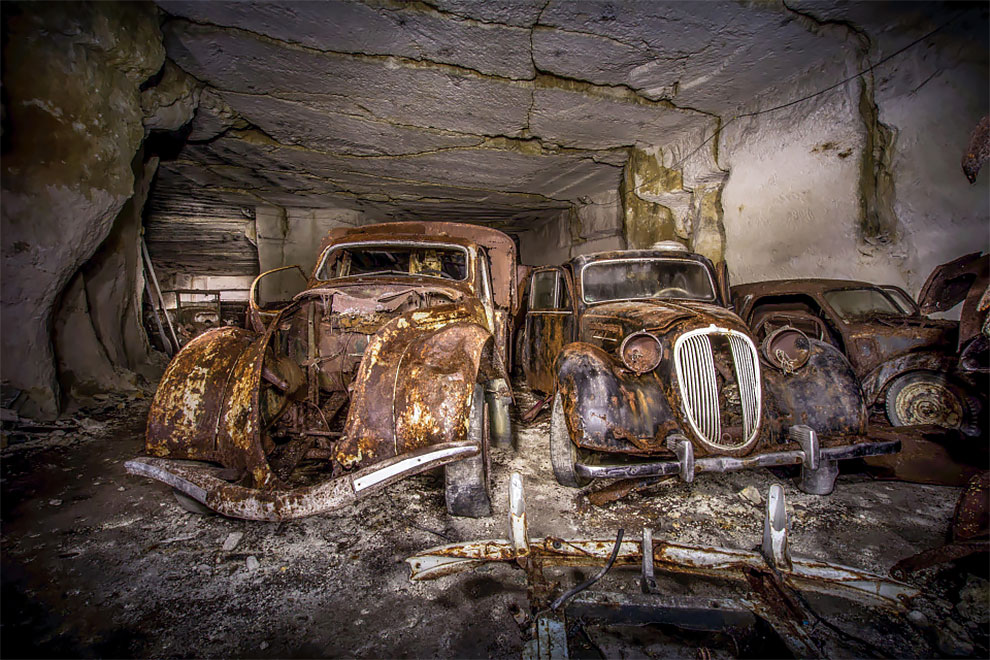 Many of the cars are now far too fragile to move 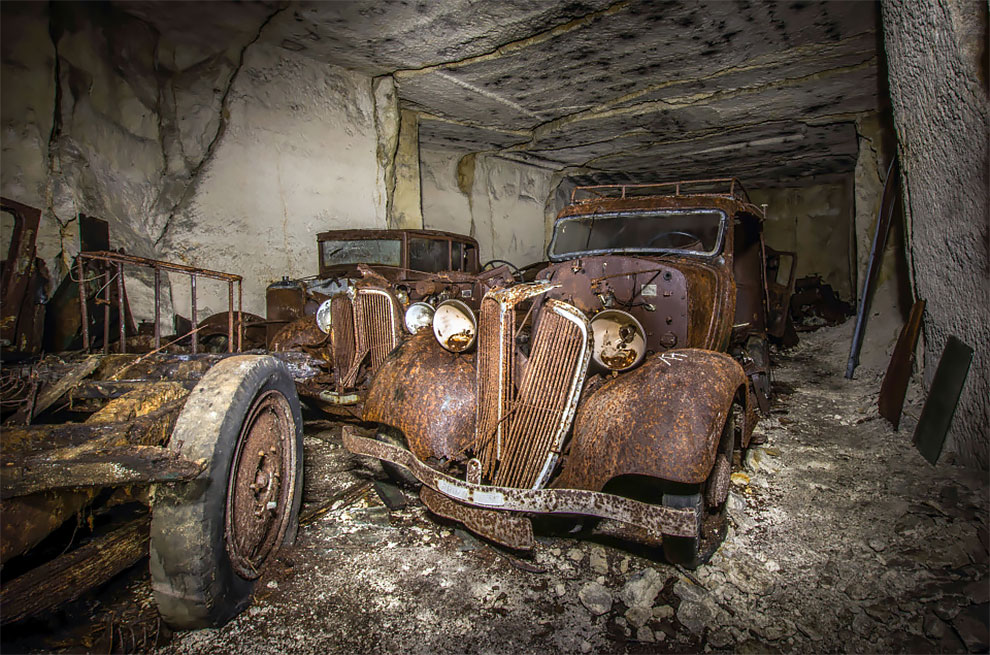 Cars from 1930s France made for an amazing discovery 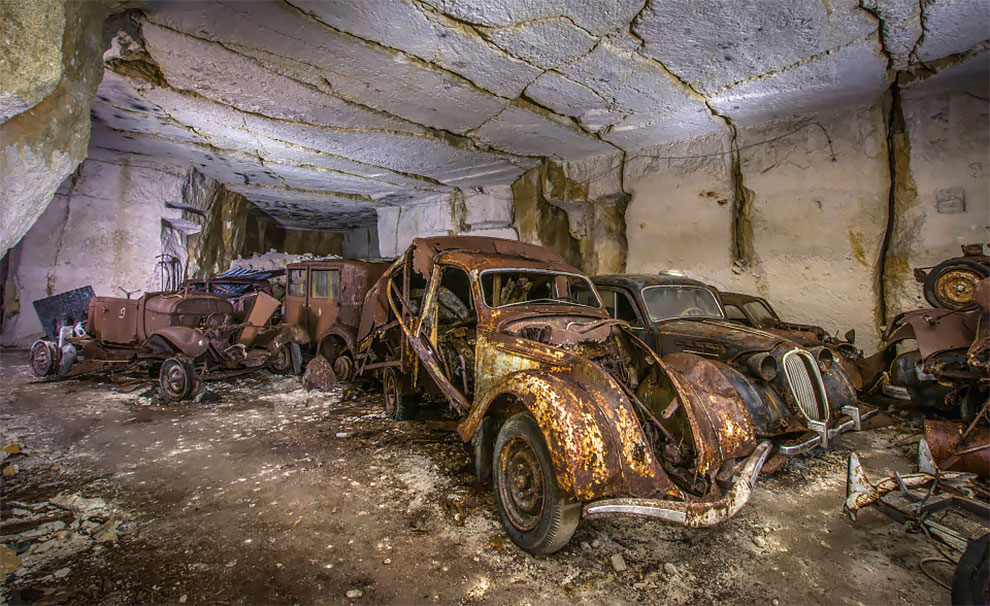 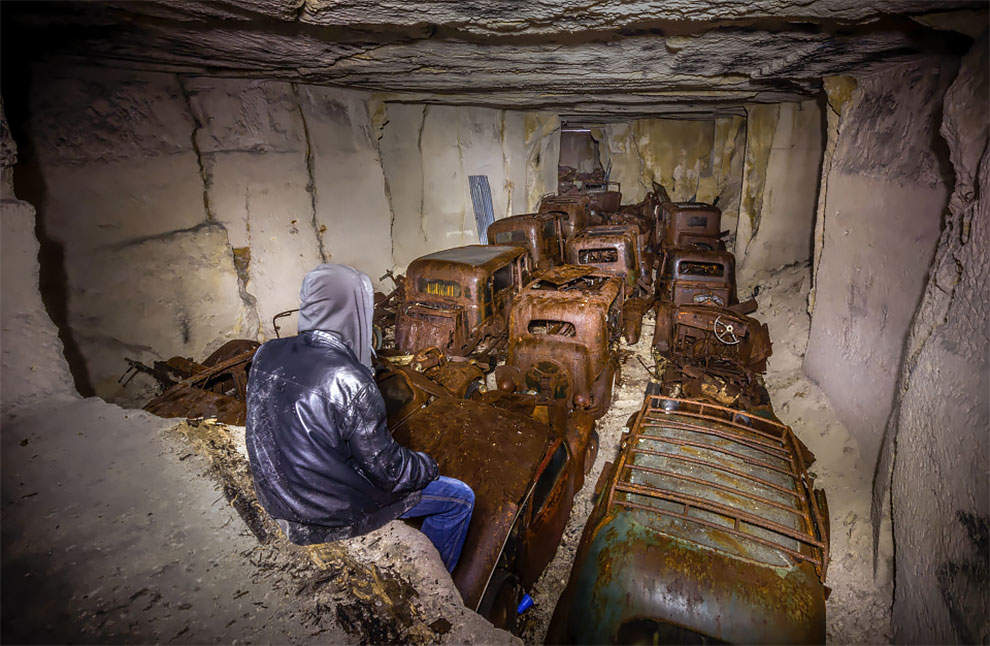 Life In Soviet Russia: Private Moments
Superb Surreal Photo Manipulations By Ben Robins That Challenge Logic
Scenic London: A Pre-Olympics Look
"Russian Elite": Photographer Documents Life Of Rich And Poor In The Prestigious Residential Area Rublevka
Dad Transforms His Adorable 4-Month-Old Son Into A Real-Life Elf On The Shelf
This Artist Takes Pictures of People Right After Kissing Them
The Photographer Took Dark and Gloomy Photos of A Small Russian City Covered with Morning Fog
Spectacular Winning Photos From The Astronomy Photographer Of The Year 2019 Contest
"The Empire Against The Crisis": Darth Vader Forced To Do Odd Jobs
Nikon Small World 2019: The Best Microscope Photos Of The Year
Stunning Time Slice Photography By Richard Silver
$2 Junk Shop Photo Turns Out To Be Worth $5,000,000
Magnificent Portrait Photos Of Hollywood Icons Taken By Douglas Kirkland
Breathtaking Drone Imagery Tops Dronestagram’s Annual Photo Awards
Recent Entries For The Comedy Wildlife Photography Awards 2017
Before the Photoshop Era, Here Are What Manipulated Photos Looked Like in the Early 20th Century
The Last Portrait Of Boxing Legend Muhammad Ali Showing The Destructive Effects Of Parkinson’s Disease
Photos Taken at Just the Right Moment
Photographer Captured Discarded Disposable Medical Masks And Gloves On The Street
Amazing Photographs Capture Everyday Life in Spanish Harlem in the Mid-1980s
Vintage Photos Proving That The Beauty Of People From Previous Generations Is A Unique Thing
Vintage Men's Magazine: Cool Pics Of Cavalier's Beauties During The 1960s
Photographer From Slovakia Took Portraits Of Dogs And They Are Beautiful
These Photos Were Made By Spinning The Camera While Shooting
Steve Madden Shoes Collection - Summer 2012
2014 National Geographic Photo Contest, Week 9, Part 1
Russian Photographer Takes Portraits With Real Animals And People Say Her Works Look Like They’re Straight From A Fairy Tale
Surreal Portraits Splicing Other People's Pictures
Burnouts by Simon Davidson
Portraits of a Baby Boy and Bulldog Who Were Born on the Same Day
abandoned, cars, collection, hides, quarry, retro