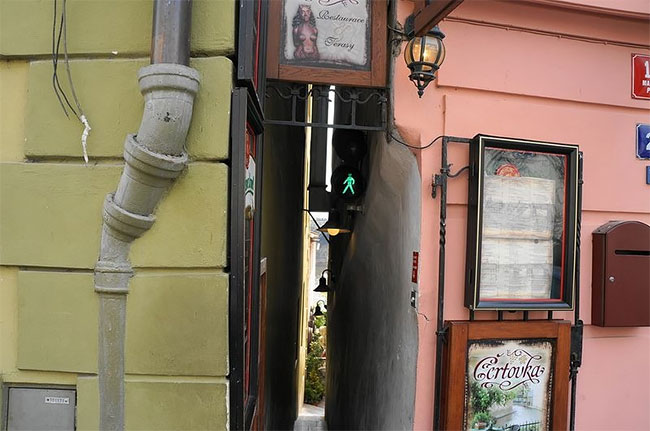 In the heart of Prague’s oldest neighborhood, the historic Mala Strana or “Little Quarter”, there is a street so narrow that it’s impossible for two people to get past each other no matter how hard they try. 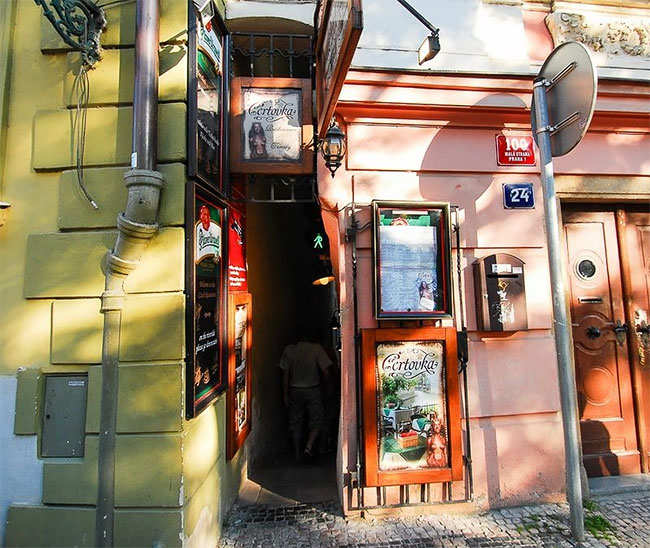 The street named Vinarna Certovka is actually a 50-centimeter wide passage (70 centimeter according to some sources) that runs for a length of about 10 meters between several houses close to the Charles Bridge. The street consists of several stone steps leading from the U Luzickeho seminare street to the Certovka restaurant at the edge of the Certovka canal. 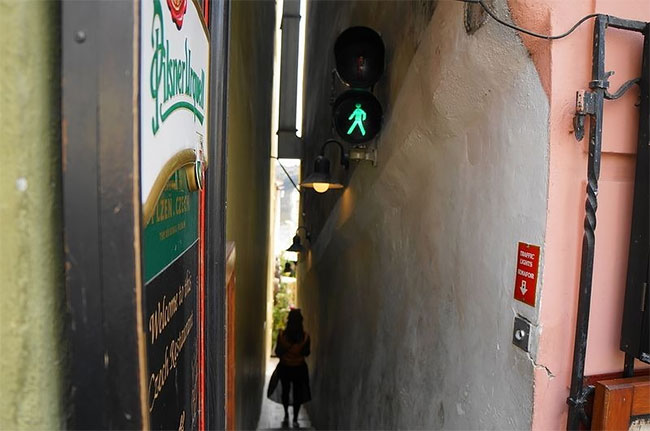 For the convenience of pedestrians, but mostly for novelty, two traffic lights were installed on either end of the street to signal when the street is free or occupied. Most people who use the street are tourists. They push the walk button, take a few pictures and when they go, they don’t take the light seriously, so usually end up colliding with someone coming from the opposite end. 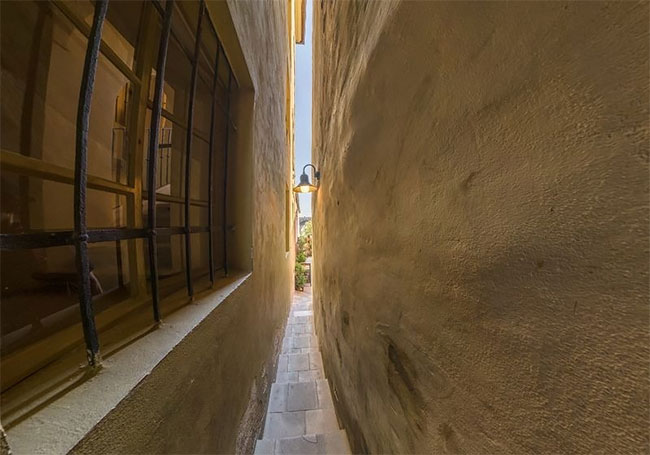 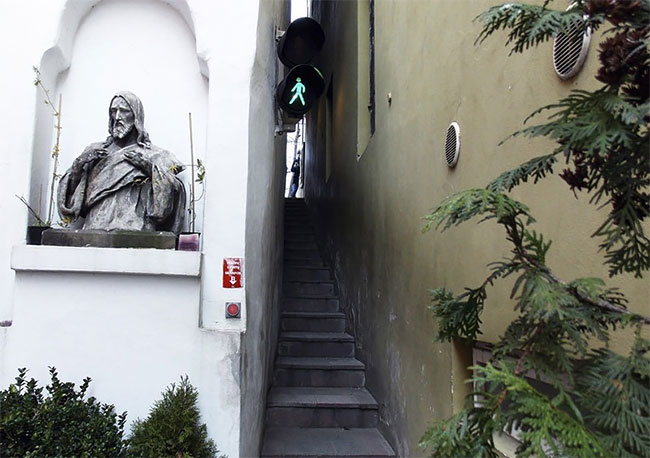 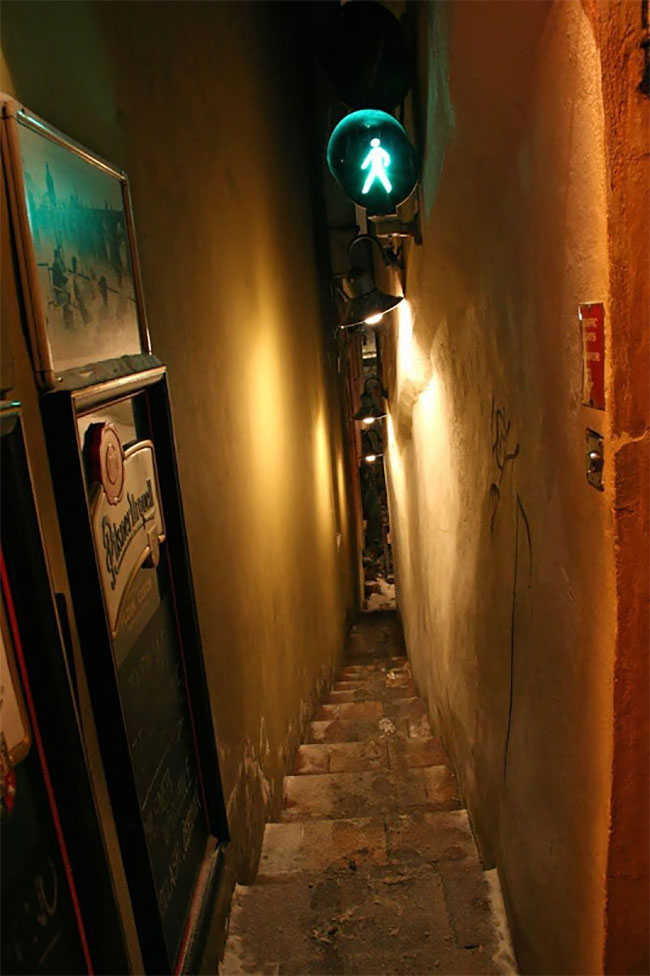 This Daredevil Diver Discovered A New River... Under Water
So In Sweden, McDonald’s Has A Ski-Thru Restaurant
Huge Cat Etched Into Peruvian Hillside Believed to Be Over 2,000 Years Old
When Airplane Food Was First Class – A Mouthwatering Look At What In-Flight Meals Used To Be Like In The Golden Age Of Flying
Inside the Gruesome Mummies of Guanajuato in the 1950s
Holi - Traditional Festival of Colours in India
Woman Parodies Perfect Instagram Travel Photos With Hilariously Unphotogenic Selfies
Haunting Photos Of A Deserted Island In Japan
Chinese Tourists Cram China's Biggest Pool Named 'The Dead Sea' On Hot Day
A McDonald's in New Zealand Lets Diners Eat Inside a Decommissioned Airplane
Fountains Of Saint Petersburg The Way They Look Now
You Can Rent Out this Eerie, Abandoned Wizard of Oz Theme Park
Couch Surfing USA: Three People, Two Dogs and One Futon
Speaking American: Some Easy Reading On Cultural Language Differential In The US
Unearthly Views Of The Hidden Snow Cave In Kamchatka
Half A Century In The Making: Tree ‘Crop Circles’ Emerge In Japan
From New York To Bangkok: Photos Of Vintage Coca-Cola Signs
Extraordinary Images Of The Costa Concordia Cruise Ship By Jonathan Danko Kielkowski
US Salt Flats Speed Week
Lines Dividing Rich And Poor Captured With Drones
The "No-Face" Day: Workers In China Wear Masks To Hide Facial Expressions
Dubai’s Love Lake: Two Hearts in the Middle of the Desert
This Is Strange But True
Vintage Cars Are Rotting In A Tunnel Of Liverpool
“The Last Iceberg” by Camille Seaman
Invasion of the Vine that Ate the South
After Their Wedding, This Couple Did What Many Of Us Have Always Dreamed Of Doing
What Peaceful Borders Between European Countries Look Like
The Lost Tribes Of Tierra Del Fuego: Rare And Haunting Photos Of Selk'nam People Posing With Their Traditional Body-Painting
These Photos Of Fireflies Show How Beautiful Summer Nights Are In Japan
narrow, prague, street, traffic