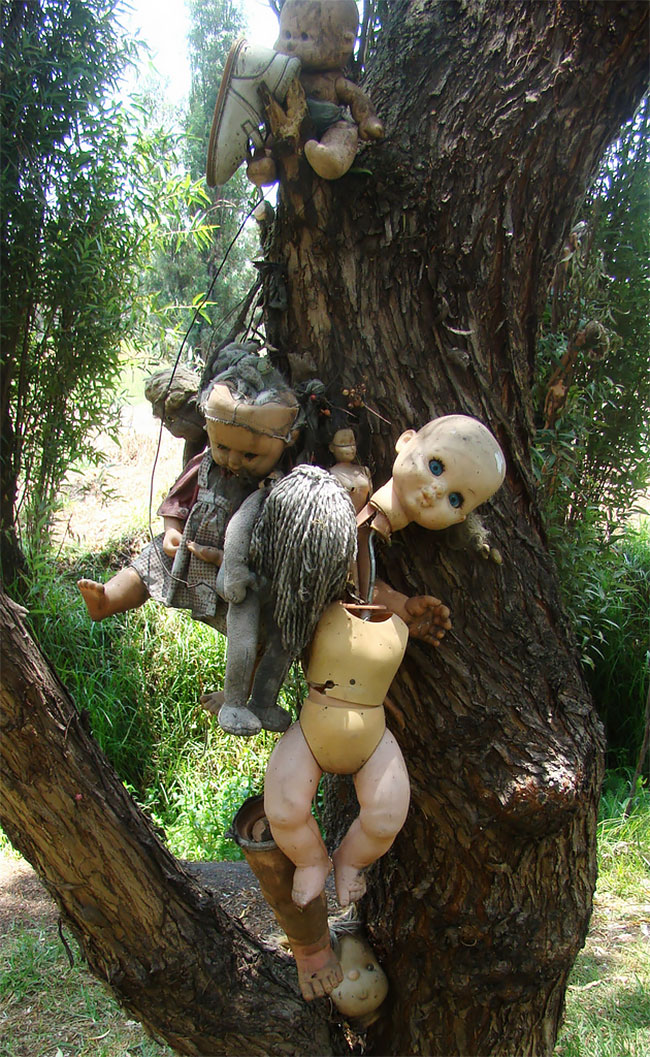 Canals in the waters of Lake Xochimilco were initially created along with that of a kind of artificial agricultural plots called chinampas. Chinampas were invented by the pre-Hispanic peoples of the region around 1,000 year ago as a way to increase agricultural production. On the shallow waters of the lakes, rafts were constructed of juniper branches. Onto these rafts floating on the water, lakebed mud and soil were heaped and crops planted.

These rafts, tied to juniper trees, would eventually sink and a new one built to replace it. Over time, these sunken rafts would form square or rectangular islands, held in place in part by the juniper trees. As these chinampa islands propagated, areas of the lake were reduced to canals. These “floating gardens” were an important part of the economy of the Aztec Empire by the time the Spanish arrived. Today, only about 5,000 chinampas, all affixed to the lake bottom, still exist in their original form, surrounded by canals and used for agriculture. The rest have become solid ground and urbanized. In the center of Xochimilco, there about 200 chinampas, covering an area of 1,800 hectares. These remaining chinampas are part of the Xochimilco World Heritage Site.

The best-known chinampa in Xochimilco belonged to a man named Julián Santana Barrera, a native of the La Asunción neighborhood. Santana Barrera was a loner, who was rarely seen in most of Xochimilco. He came to fame because he would collect the old broken bodies of dolls from the canals and rubbish tips, and then hang them from branches and tie them to tree trunks to keep away evil spirits and appease the spirit of a dead girl he had found in the canal a few years before. He would state that he believed that the dolls were somehow still “alive” but “forgotten” by their owners, and other places was “discovered” in the early 1990s, when the area was being cleared of excessive water lilies.

Before this, it was thought that no one lived on this chinampa, but Santana Barrera was there, living in a hut with no services and generally did not receive visitors, other than family. The display of dolls and parts attracted attention of the press. Eventually, he stated to them that the dolls were there to keep away evil spirits and to help with the harvests in his gardens. His favorite was called La Moneca and he frequently moved the dolls around among the tree branches. He began to receive more visitors to see the dolls, which eventually included local political figures. Santana Barrera died in 2001; there were many ideas on how he was killed, some say he drowned himself in the river because he was driven insane, others say the dolls came alive and killed him. But in fact he just died of old age. The dolls, however, are still on the island, accessible by boat. 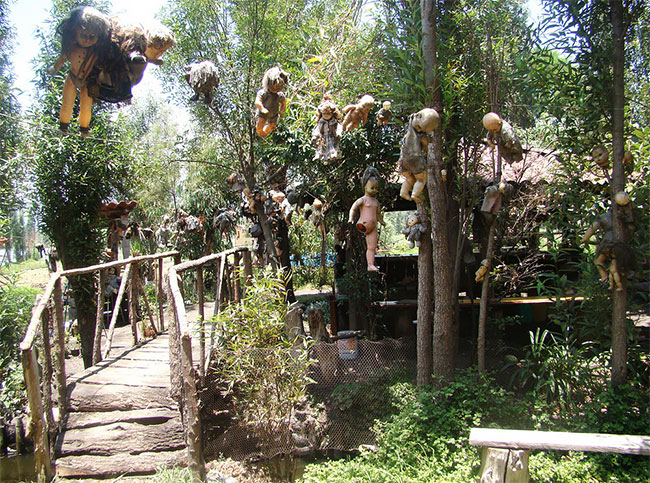 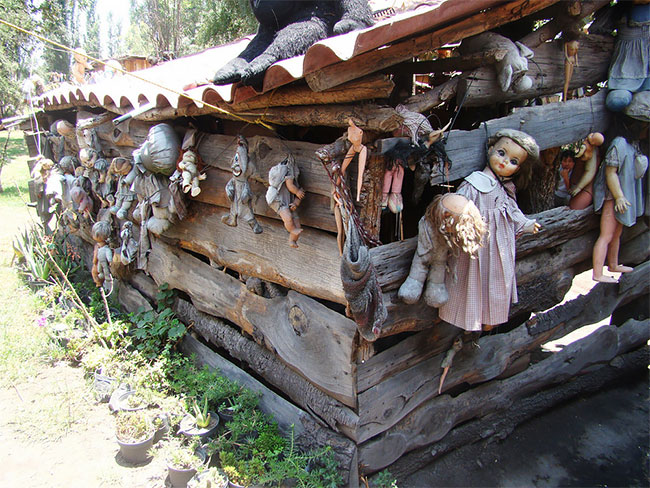 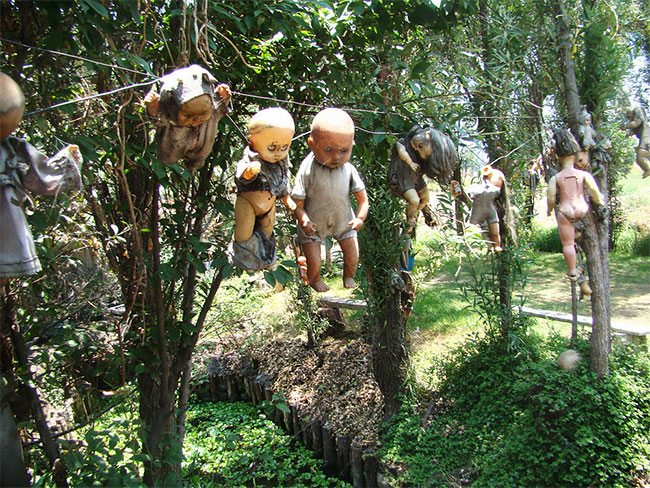 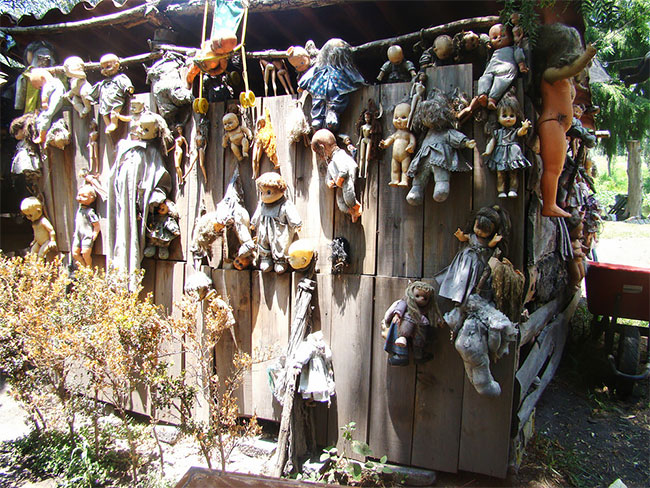 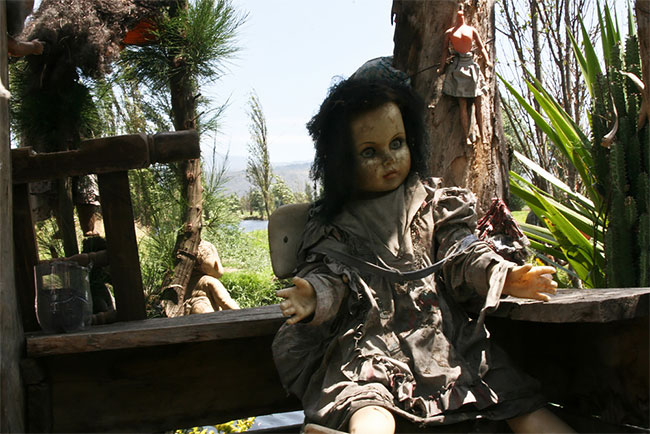 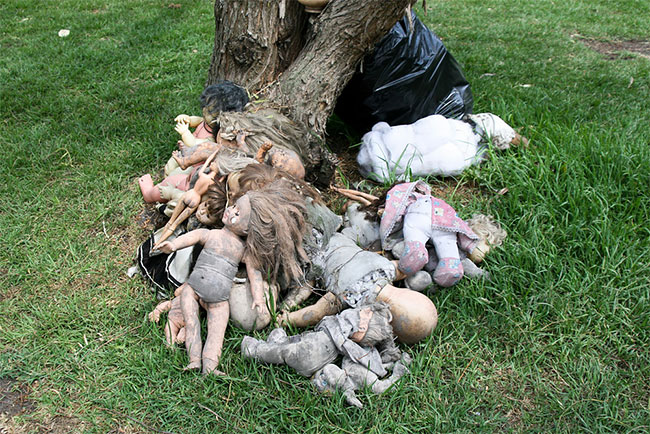 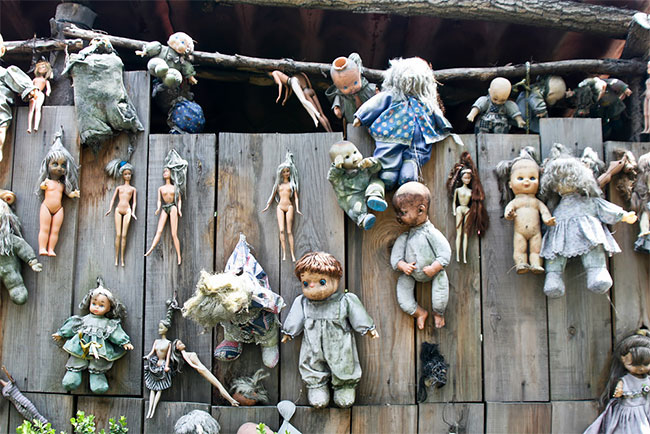 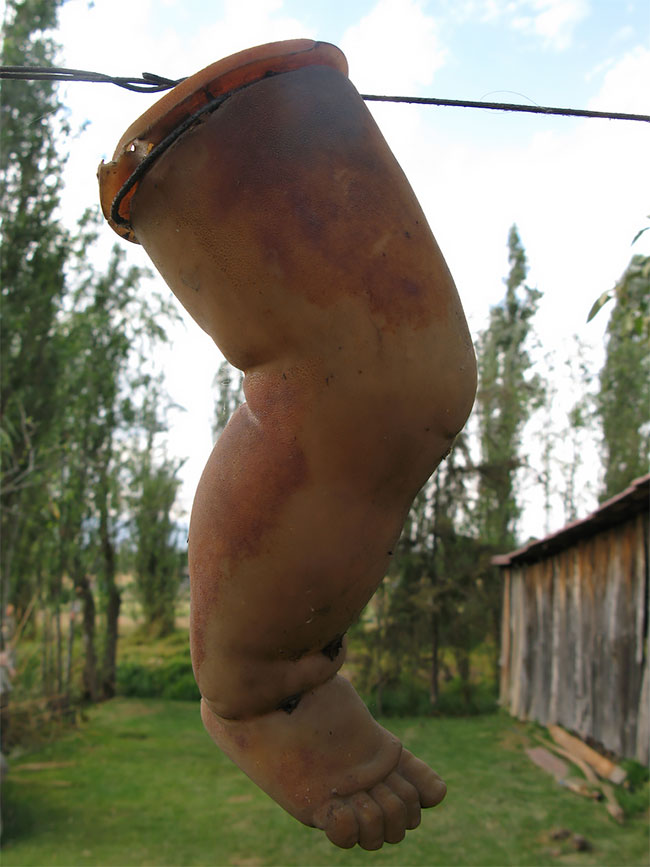 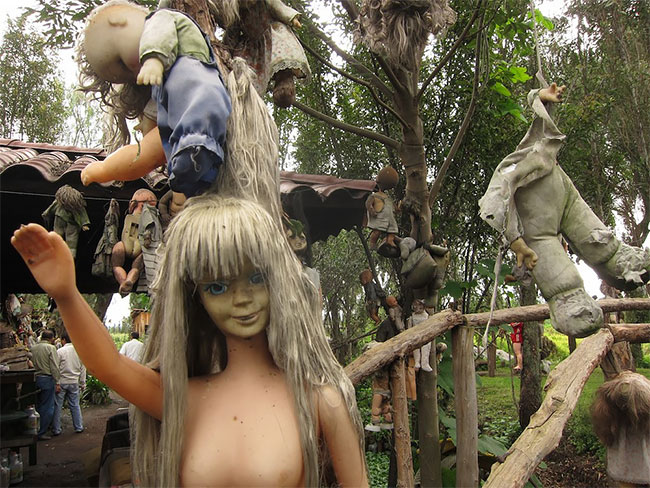 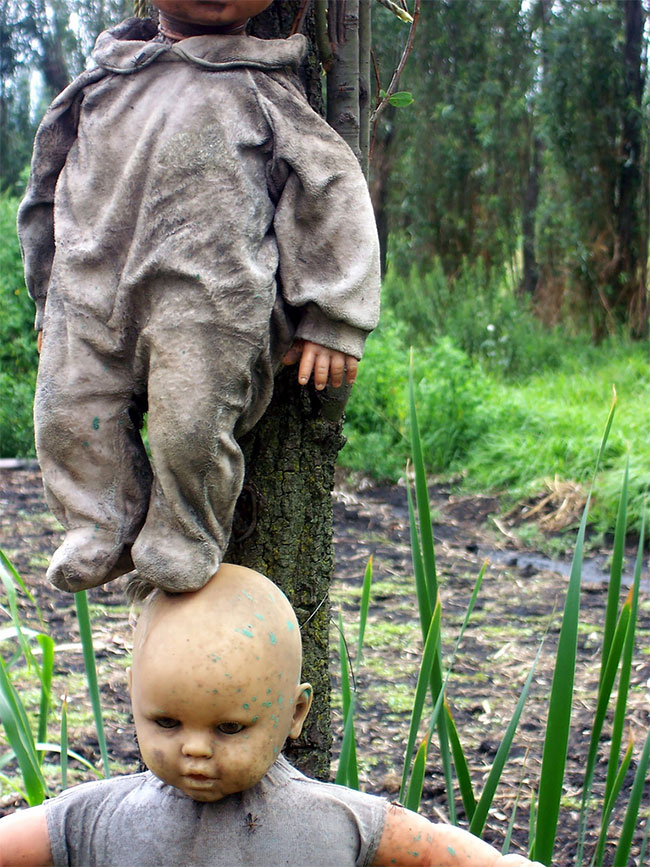 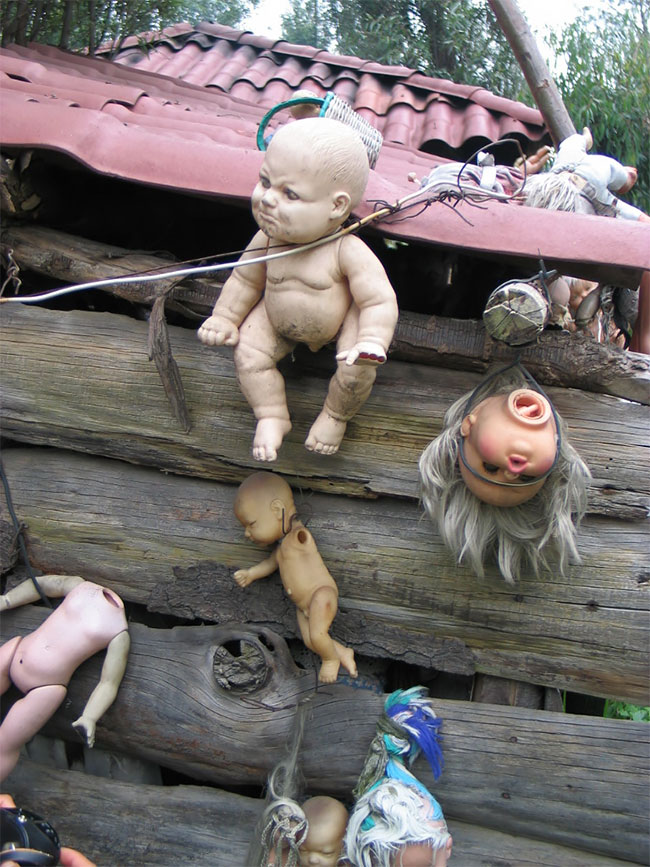 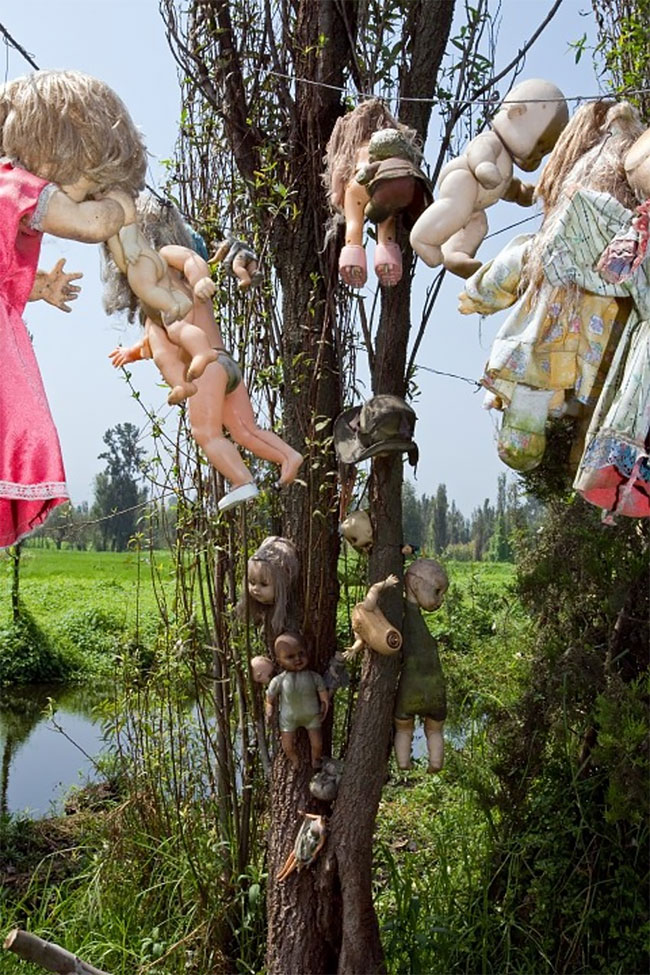 Life-Sized Wax Figures of Hollywood Stars From The 1980s and 1990s
Bone Church of Rome: Amazing Vintage Photos Show Inside Rome’s Capuchin Crypt From the Late 19th Century
“The Last Iceberg” by Camille Seaman
Huge Bikini Snow Show As Russians Mark The End Of The Skiing Season
This Thai Resort Is Surrounded By Trees And Was Inspired By Four Fictitous Clans
Silent Hill
An Environmental Island Floating on the Equatorial Pacific
Experience The Fjords And Mountain Ranges Across Norway In A Birdbox
Mystery Piano On Top Of The Mountain
Illegal Fishing in Zimbabwe
A Brief Snapshot of What the World Is Actually Eating for Breakfast
Fiji's Awesome Floating Bar And Pizzeria
What Happens When Carpets Leave Apartments
Skull Walker: A Creepy Scuttling Skull-Creature
Shark Island in Central Indonesia
A 1960s Bedford Panorama Bus Lovingly Converted Into A Traveling Home
Glamorous Vintage Camper Is Your Midcentury Dream Home On Wheels
This New Restaurant Concept In San Francisco Has No Visible Staff
50 Of The World's Best Breakfasts
Virtual Traveller Used Google Street View To Explore Poland During Quarantine, Here’s What She Found
Then and Now: 31 Amazing Pictures Show The Change Of Madrid Over Time
The World's Largest Sauna With Beautiful Panoramic Views Opens In Norway
This Royal Navy Sea King Helicopter Transformed Into Glamping Pod
This Is Strange But True
creepy, dolls, island, mexico, Xochimilco

"Moon Level Luxury At Down To Earth Rates": Al Stovall's 1960s Space Age Lodge In Anaheim, California
These 50 Town Names In The USA Sound Like A Joke But They’re All Real
Meet Lulu Hashimoto – Japan’s Creepy Real-Life Living Doll
Window of the World: Europe Made in China
Photographer Matthew Christopher Captures This Abandoned Theater Act As A Time Capsule Of A Location That Was Once Rocked By The Stars
This ‘Swim Reaper’ Instagram Account Is Absolute Gold
This Gorgeous Place Might As Well Be Called Pirate Island
National Geographic Traveler Photo Contest 2014 Is Underway
Be The Envy Of Baggage Claim With This Hilarious Custom Selfie Cover
What the World Eats By Peter Menzel And Faith D'Aluisio
2007 ‒ 2023 by Design You Trust. Proudly hosted by WebHostingBuzz.
Privacy Policy · Terms of Service · Content Removal Policy ❤️ 🇺🇦