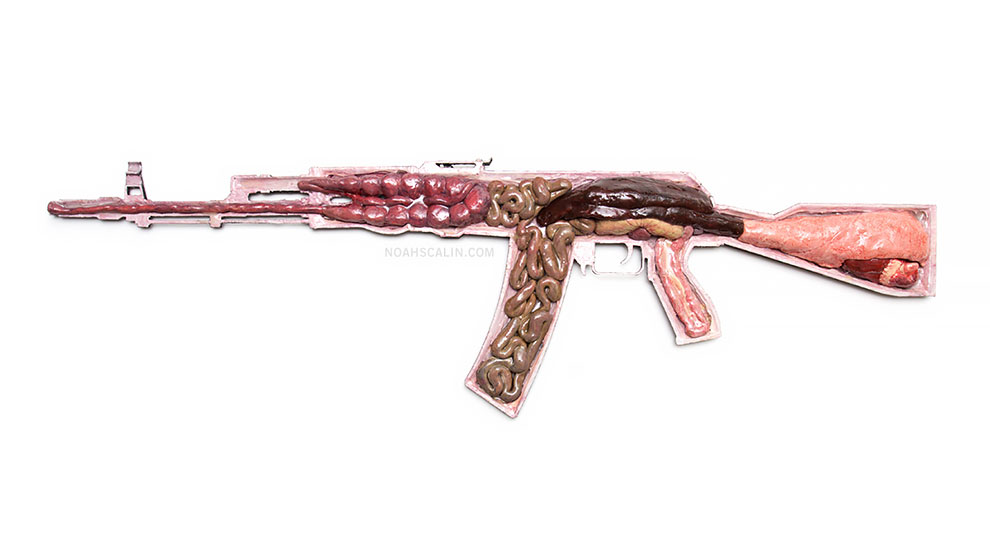 Artist Noah Scalin has created an amazing series of artworks entitled Anatomy of War that consists of human, ‘anatomically correct’ guns. Scalin’s creations come of a mixture of polymer clay, acrylic and enamel and aim to humanize guns in order to discuss gun violence in a more sensitized and complex way. Anatomy of War provokes the viewer and motivates people to think of all the lives lost by guns, replacing the bullets with human organs. 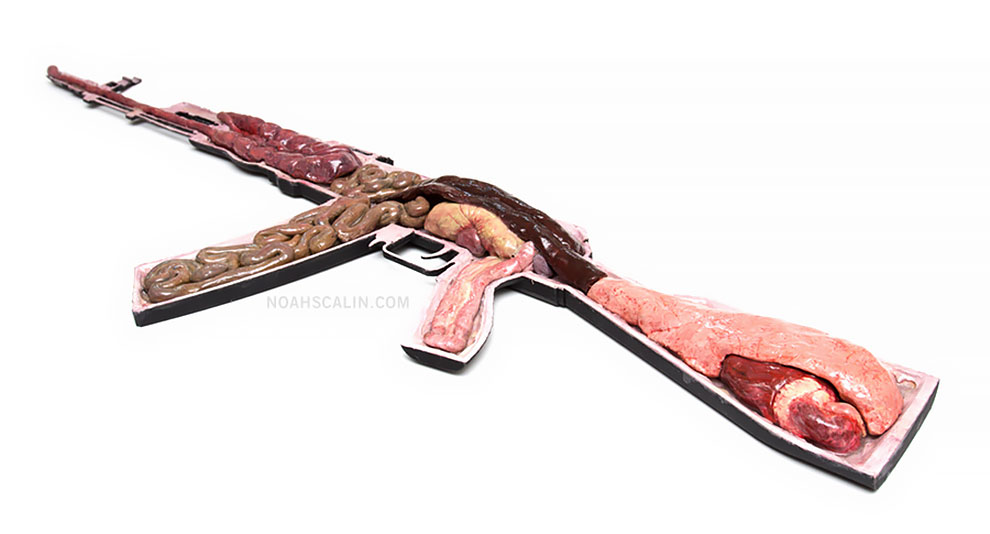 According to the artist’s statement: “These guns have been clinically dissected revealing a remarkably human set of internal organs – rather than the cold steel and bullets normally found within. The objects becomes as fragile as the lives that they can potentially take. In addition the gun become a physical extension of the body of the user of the weapon, albeit one with a conspicuously absent brain. 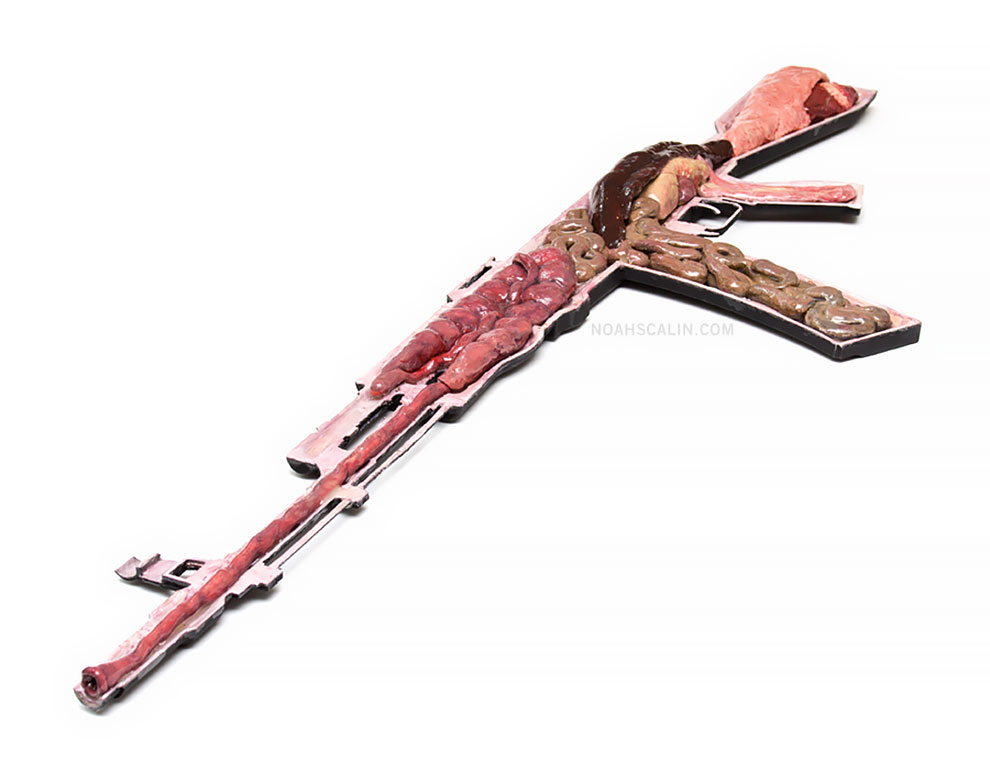 It’s impossible to separate the violence of the ongoing wars around the globe from the weapons that fuel them – specifically the countless numbers of small arms that are endlessly in circulation passing hand-to-hand. However, too often the discussion around guns in America gets wrapped up in emotional terms around the 2nd Amendment. Anatomy of War brings the discussion back to the individual human level. 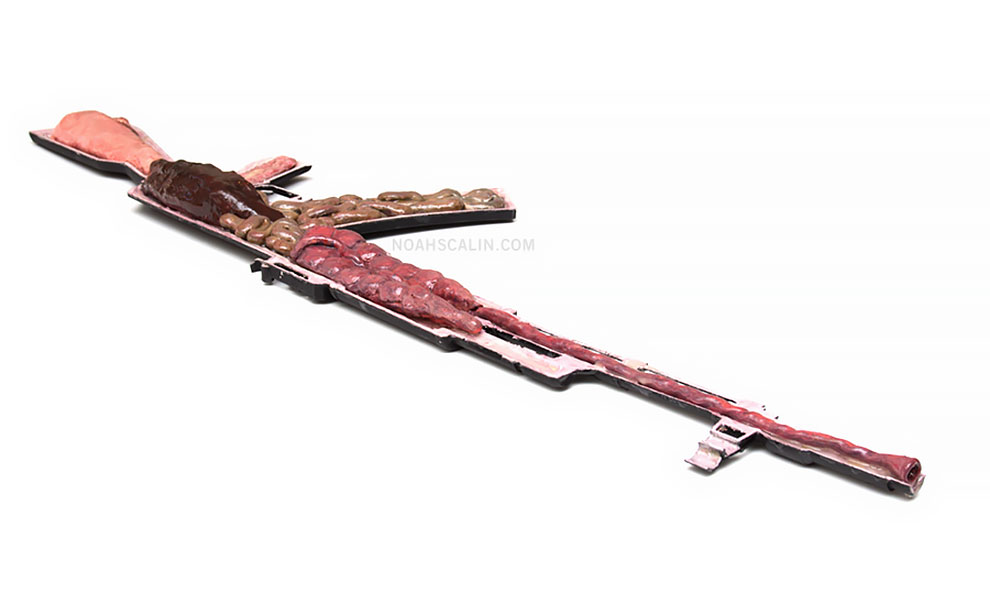 In constant use since its creation in 1946, it is estimated that there are nearly 100 million AK-47 style assault rifles currently in circulation around the globe. Because of its resilience and ease of use this weapon can be found in the hands of military personnel, terrorists, freedom fighters, and child soldiers alike. It has become an iconic image – a symbol that is found on album covers & jewelry and in photos of the famous & infamous. It’s also the only modern weapon to appear on a national flag (Mozambique). 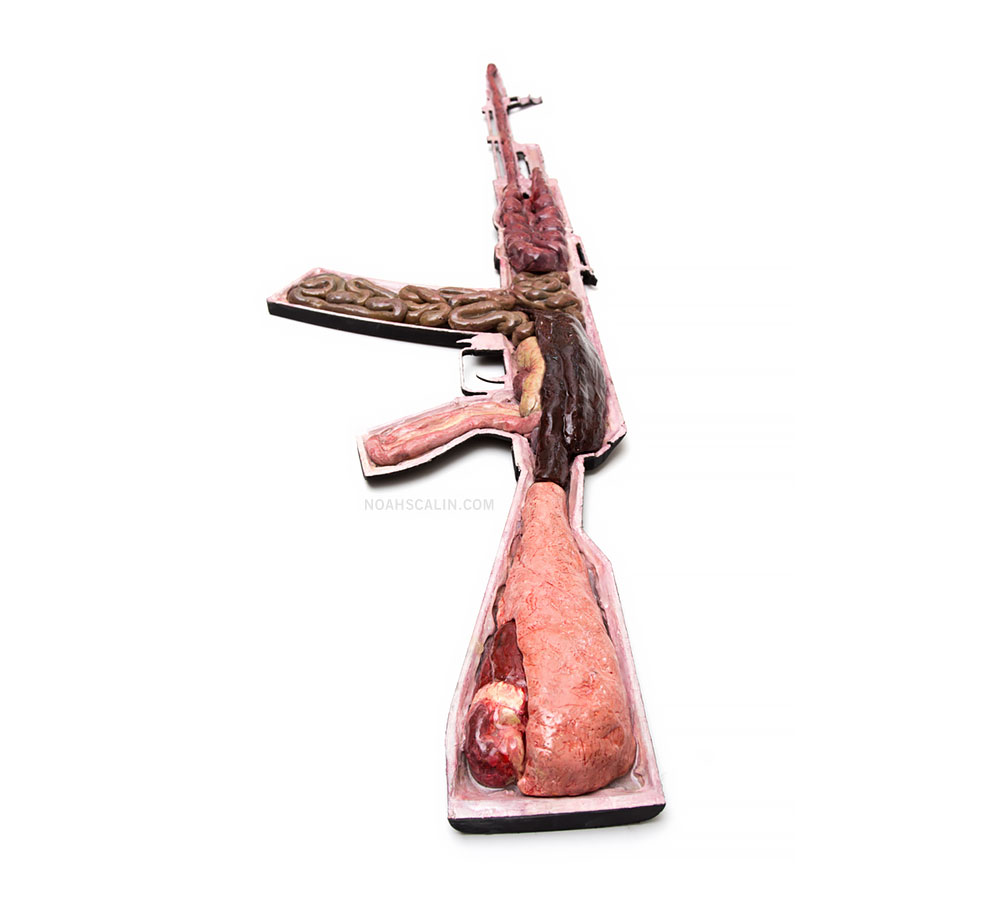 Mikhail Kalashnikov created the design of the AK-47 while a soldier in the Russian army, but his relationship to the weapon he created remained ambivalent throughout his life. While never outright denouncing it he often made statements that showed his unease with its proliferation, “I’m proud of my invention, but I’m sad that it is used by terrorists. I would prefer to have invented a machine that people could use and that would help farmers with their work – for example a lawnmower.” And he ultimately reached out to the leader of the Russian Orthodox Church seeking absolution for his contribution to the deaths of untold numbers of people, shortly before his death in 2013 at 94 years old.” 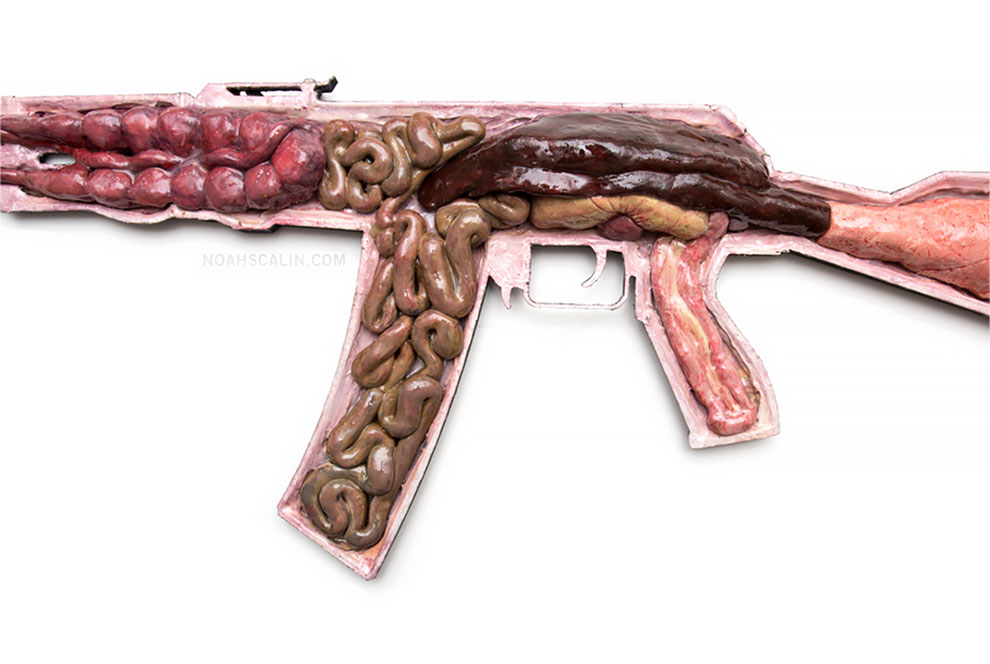 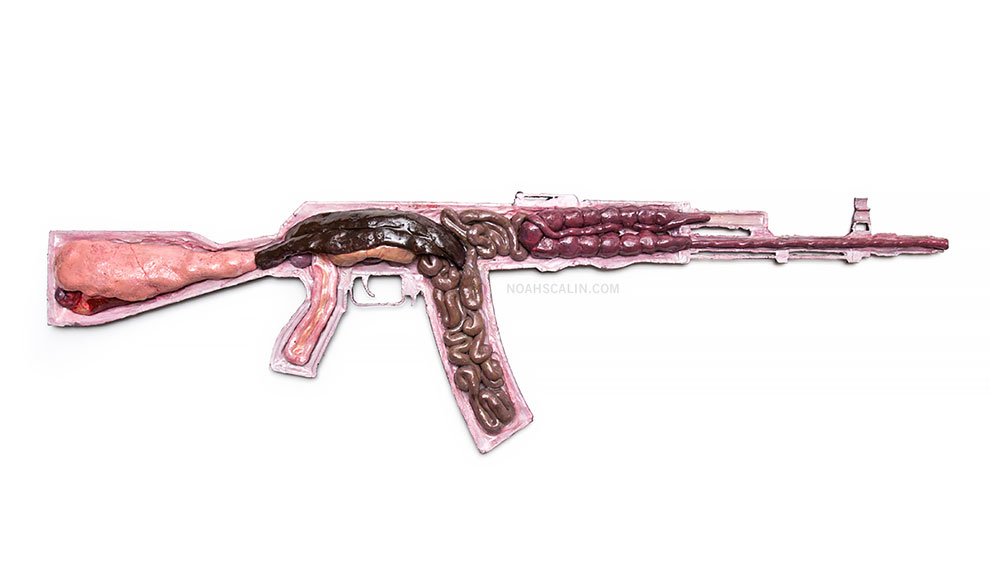 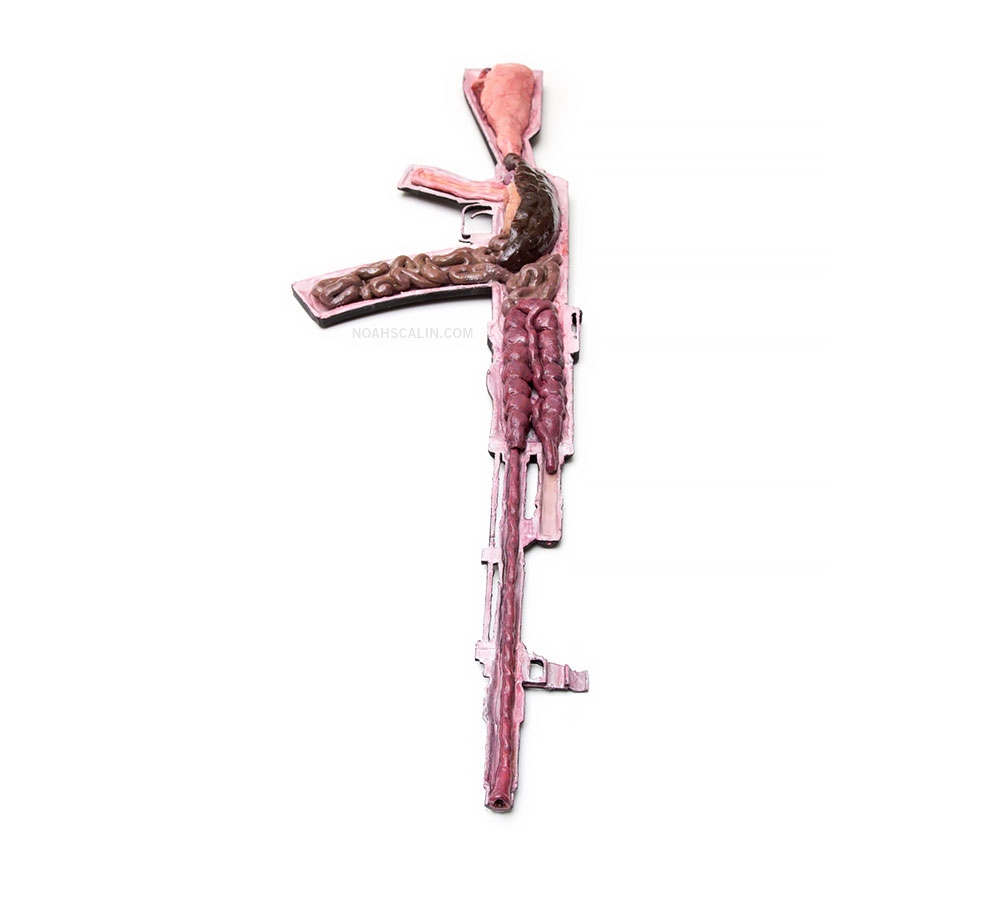 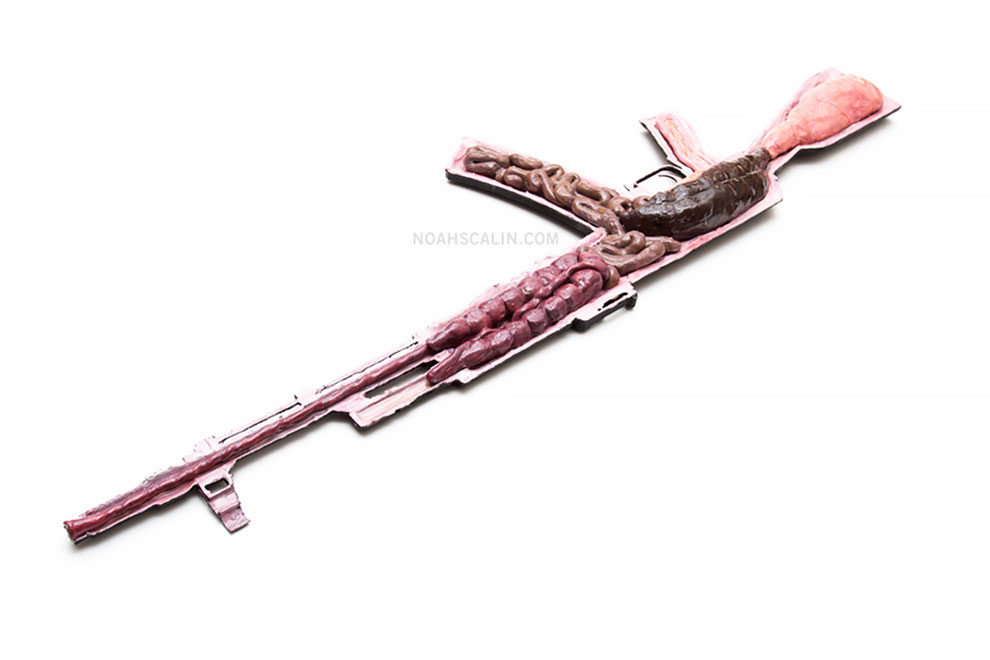 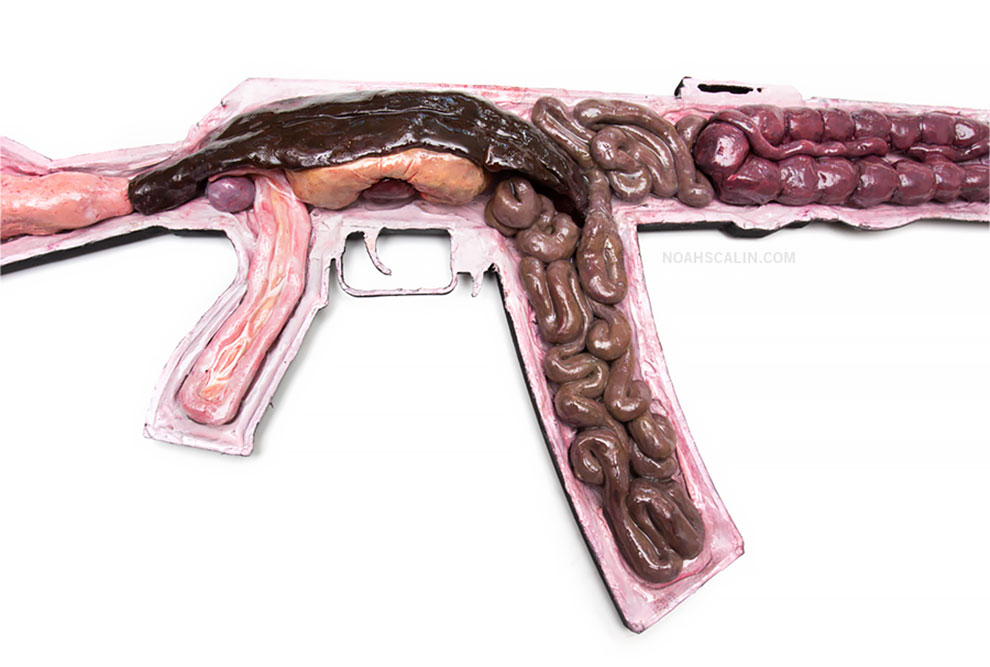 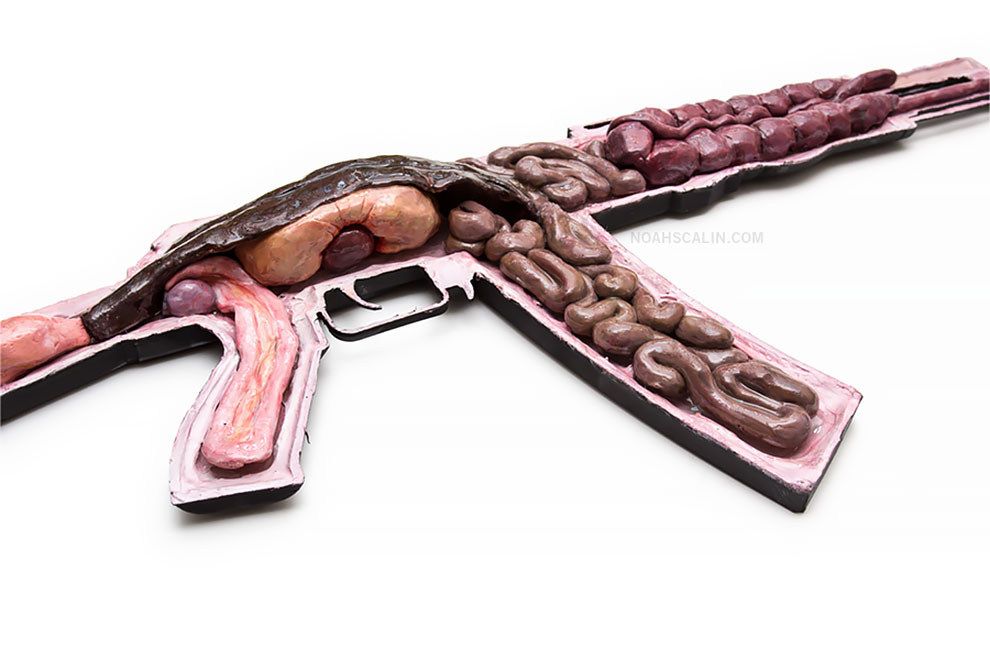 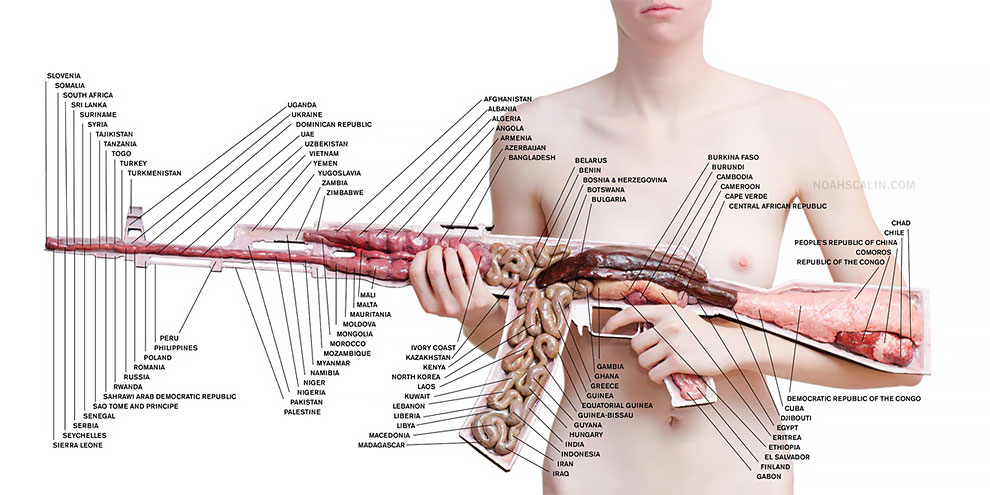 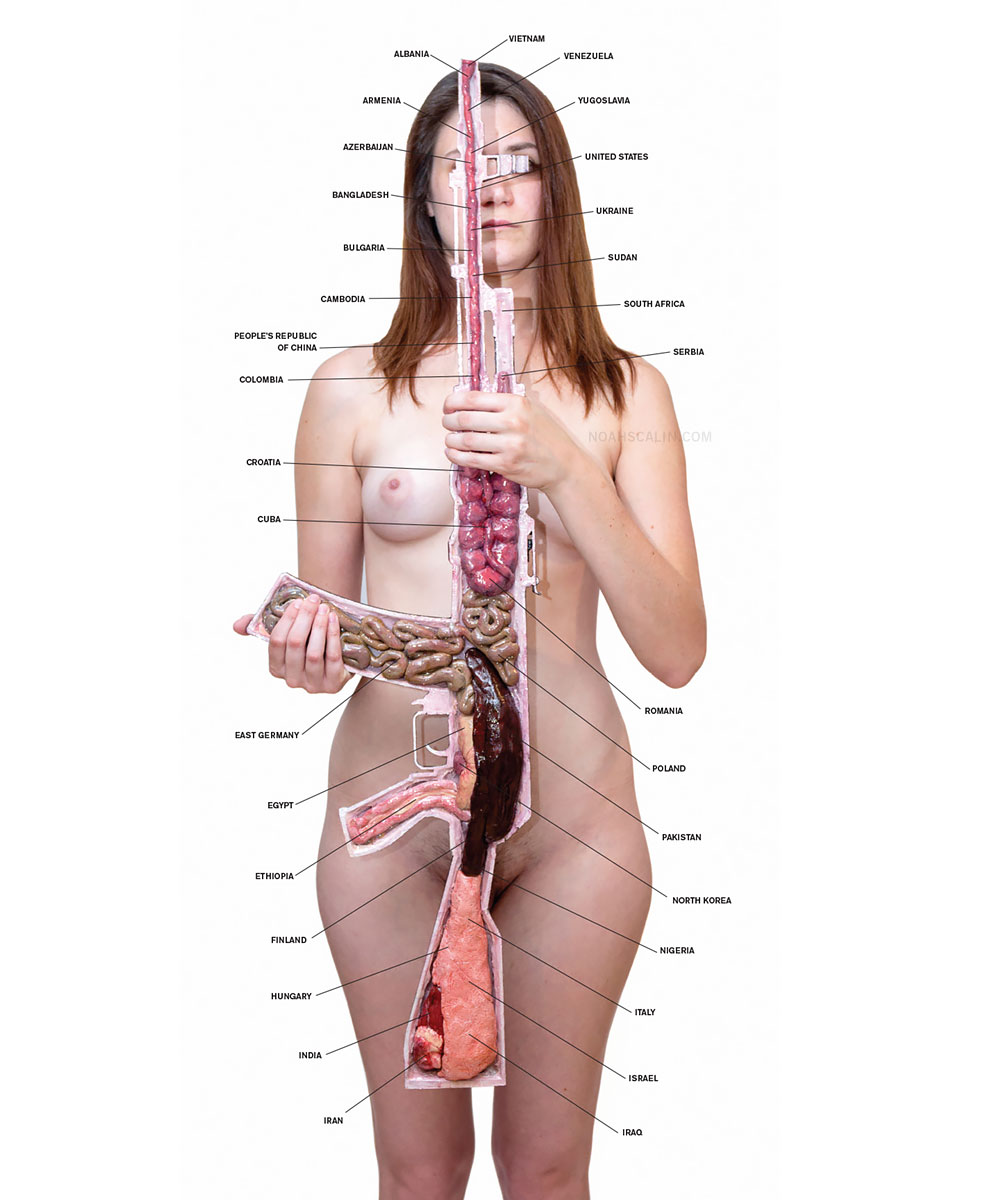 These Are Some Of The Greatest Lipstick Designs On The Planet
Retro Photoshop Tool Bar Enamel Pin: 3" Of Throwback Fun By Maxistentialism
Anthony Hopkins Testing Different Masks for Hannibal Lecter in ‘The Silence of the Lambs’, 1991
Artist Redesigned Famous Logos, Printed Them Out And Repackaged Them In A Way That Will Mess With Your Head … In A Good Way
Instagram’s “Pointless Packaging” Is Both Hilarious And Socially Aware
Renowned Tattoo Artist Inked Clients Through a Hole in the Wall Without Ever Meeting Them
Shopikon: Your Guide to the Best Local Stores
Stylist Guy Tang Creates Magical 'Color Changing Hair'
In China, A Giant Panda Statue With Its Own Iron Man Suit
Hilarious Cosplay Fails
Your Very Own Opossum: An Adorable Opossum Plush, Screaming Just For You
British Artist's Evocative Ceramic Sculptures Offer A Slice Of Summer
Designer Makes Her Clothes Unique By Printing On Manhole Covers, And It Breaks The Internet
A Towering Turtle of Discarded Industrial Junk Welded By Ono Gaf
Compare Orcs And Their Actors In “Warcraft: The Beginning”
Food Artist Hellen Die Pays Tribute To Alien For Her Thanksgiving Dinner
Japanese Twitter User Shares Simple And Clever Way To Make Your Own Reusable Mask
With This Simple Weightlifting Kit You Can Make Your Fingers Stronger
Turn Your Apple Watch Into A 1984 Macintosh
Clever Combinations Of Illustrations And Wood Carvings Create Extraordinary Miniature Cities
ASOS Are Selling 'Body Bows' And People Are Very Confused
These Crocheted Pasta Dishes are Simply Delightful
Russian Duo Makes Amazing Magic Rolling Pins for A Beautiful Cookies
Designer Duncan Shotton Creates A Miniature Swimming Pool Drinking Glass
Portuguese Street Artist Wrapped Up A Giant Squirrel On The Streets Of Tallinn In Estonia
Gorgeous Recipes Show Avocado Slices Arranged In Swirls, Shaped Into Roses
Artist Turns Old Mattresses Into Giant Foods
This Epic Lamp Made From Cheap Action Figures Will Delight Your Nerd Senses
Whoo Could Resist This Cuddly Crochet Owl Blanket?
Incredibly Realistic Sculptures Of People Who Lived Thousands Of Years Ago By Oscar Nilsson
anatomy, cost, guns, violence