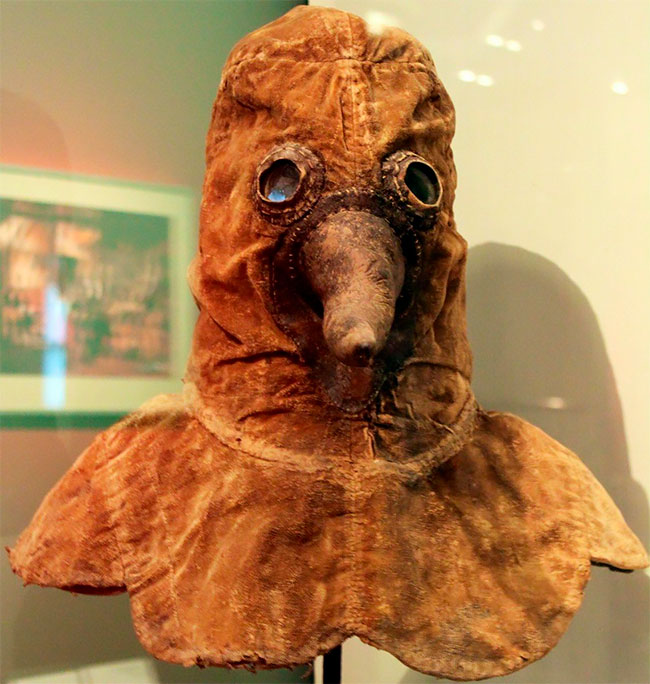 This authentic 16th century plague doctor mask has been preserved over the years and is currently on display at the German Museum of Medical History in Ingolstadt.⁣ This was the first design of the Plague Doctor’s mask. During medieval Europe, there were two main theories of how diseases were spread and contracted: the Four Humors theory, and the Miasma theory.

Paul Fürst, engraving, c. 1721, of a plague doctor of Marseilles (introduced as ‘Dr Beaky of Rome’). His nose-case is filled with herbal material to keep off the plague. 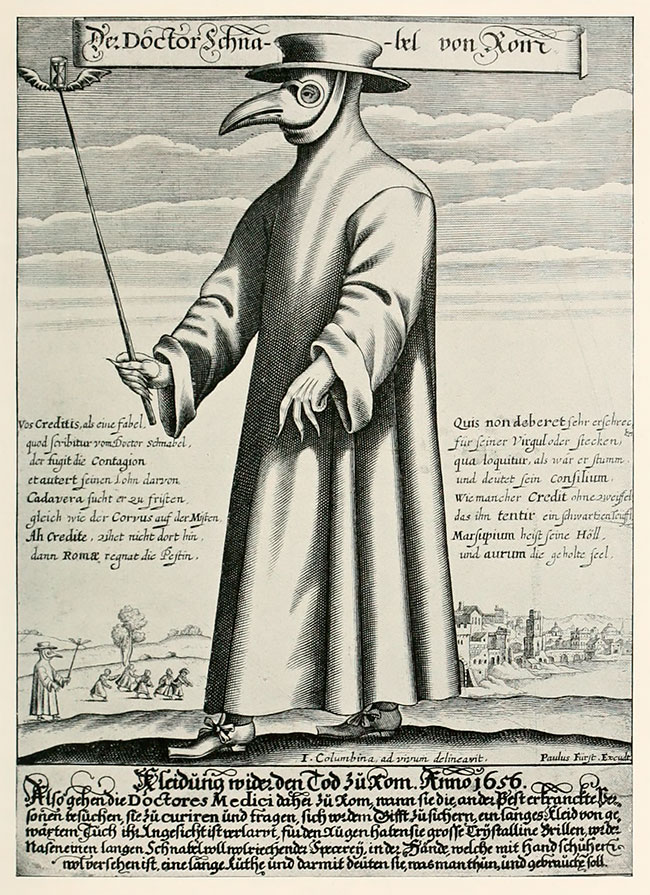 This mask was designed to fight against the Miasma theory. This theory of disease believed that people got sick from “bad air”, and so what this mask’s long nose was designed to do was the wearers would put pleasant smelling herbs and light then on fire to prevent Miasma from being inhaled by the wearer by “cleansing” the “bad air”. 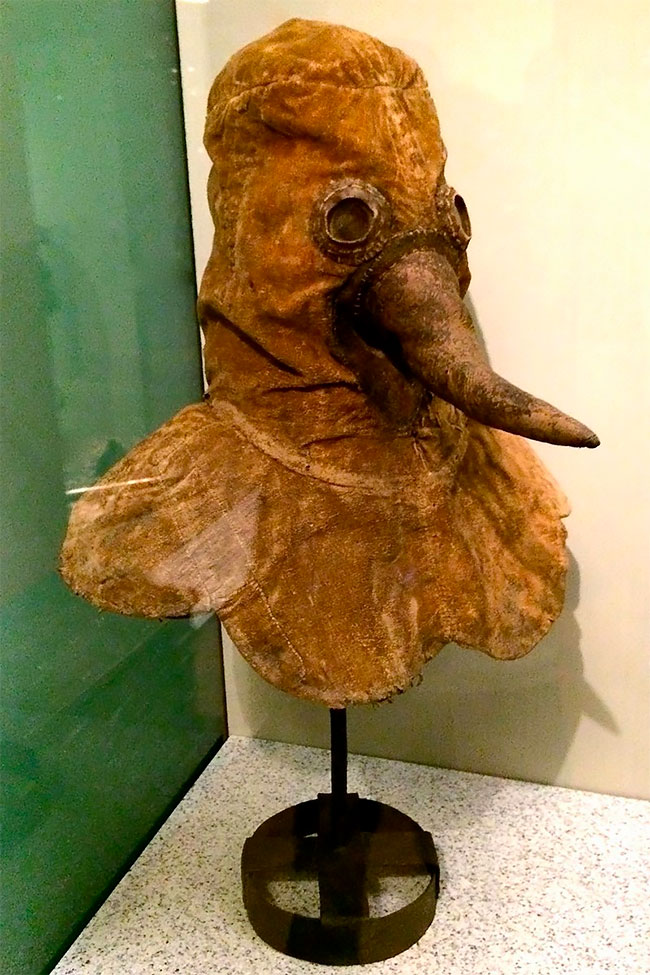 The mask had glass openings in the eyes and a curved beak shaped like a bird’s beak with straps that held the beak in front of the doctor’s nose. The mask had two small nose holes and was a type of respirator which contained aromatic items. The beak could hold dried flowers (including roses and carnations), herbs (including mint), spices, camphor, or a vinegar sponge. The purpose of the mask was to keep away bad smells, known as miasma, which were thought to be the principal cause of the disease, before it was disproved by germ theory. Doctors believed the herbs would counter the “evil” smells of the plague and prevent them from becoming infected. 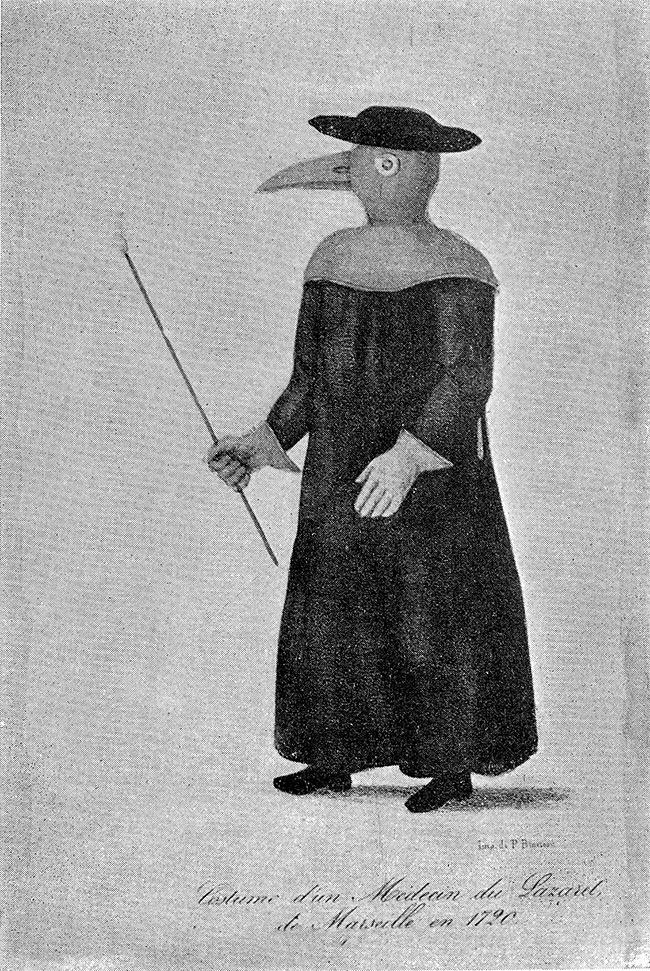 The beak doctor costume worn by plague doctors had a wide-brimmed leather hat to indicate their profession. They used wooden canes in order to point out areas needing attention and to examine patients without touching them. The canes were also used to keep people away, to remove clothing from plague victims without having to touch them, and to take a patient’s pulse. 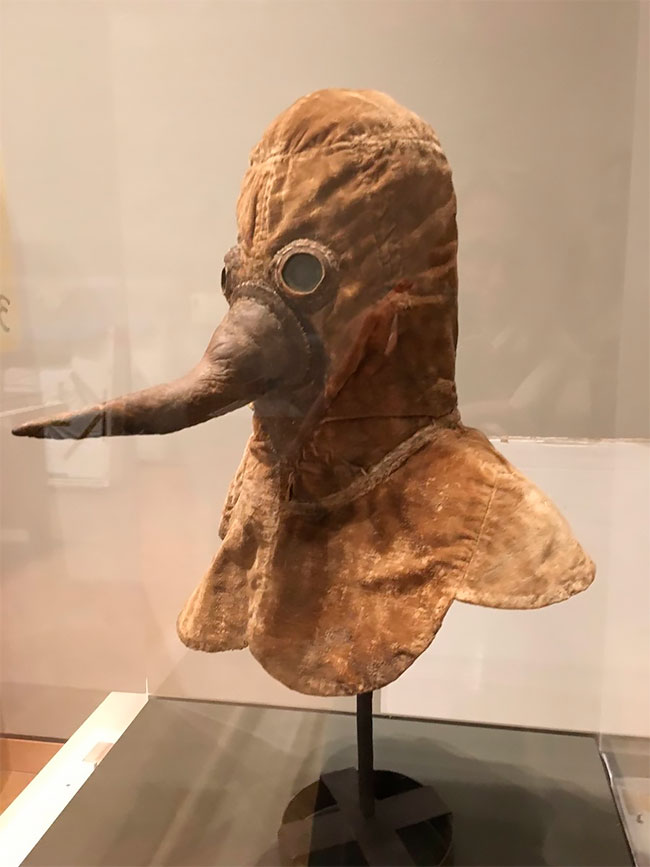 Medical historians have attributed the invention of the “beak doctor” costume to Charles de Lorme, who adopted in 1619 the idea of a full head-to-toe protective garment, modeled after a soldier’s armor. This consisted of a bird-like mask with spectacles, and a long leather (Moroccan or Levantine) or waxed-canvas gown which went from the neck to the ankle. The over-clothing garment, as well as leggings, gloves, boots, and a hat, were made of waxed leather. The garment was impregnated with similar fragrant items as the beak mask. 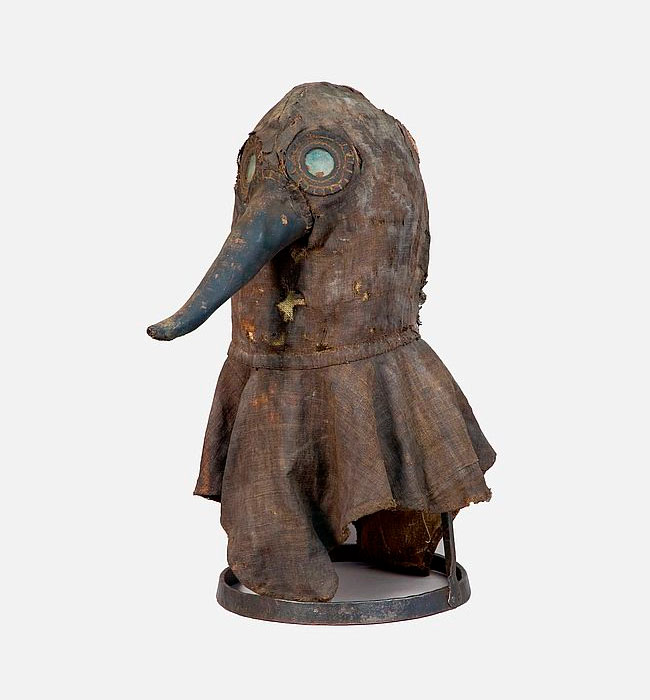 Lorme wrote that the mask had a “nose half a foot long, shaped like a beak, filled with perfume with only two holes, one on each side near the nostrils, but that can suffice to breathe and to carry along with the air one breathes the impression of the drugs enclosed further along in the beak.” 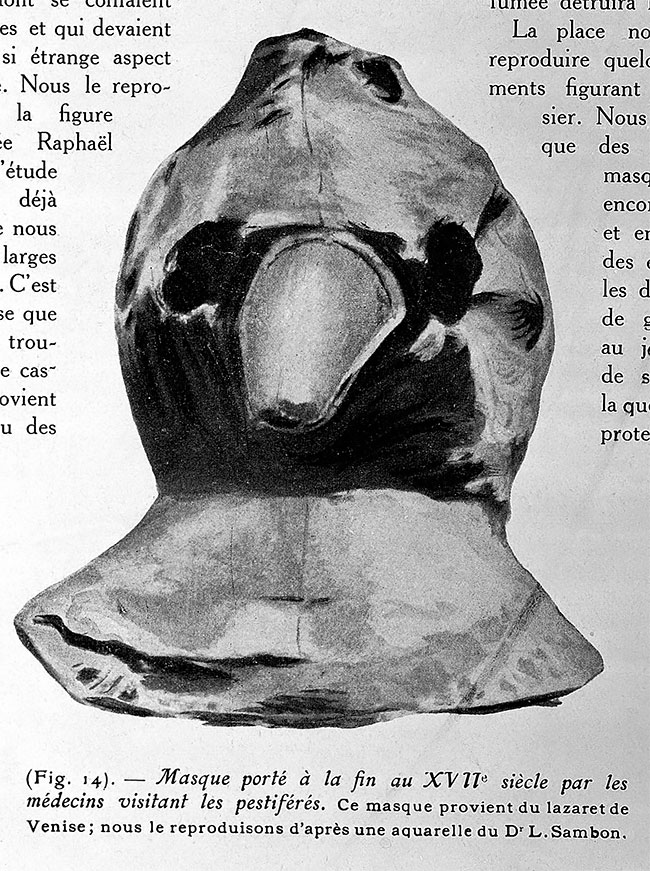 The Genevese physician Jean-Jacques Manget, in his 1721 work Treatise on the Plague written just after the Great Plague of Marseille, describes the costume worn by plague doctors at Nijmegen in 1636–1637. The costume forms the frontispiece of Manget’s 1721 work. The plague doctors of Nijmegen also wore beaked masks. Their robes, leggings, hats, and gloves were made of morocco leather. 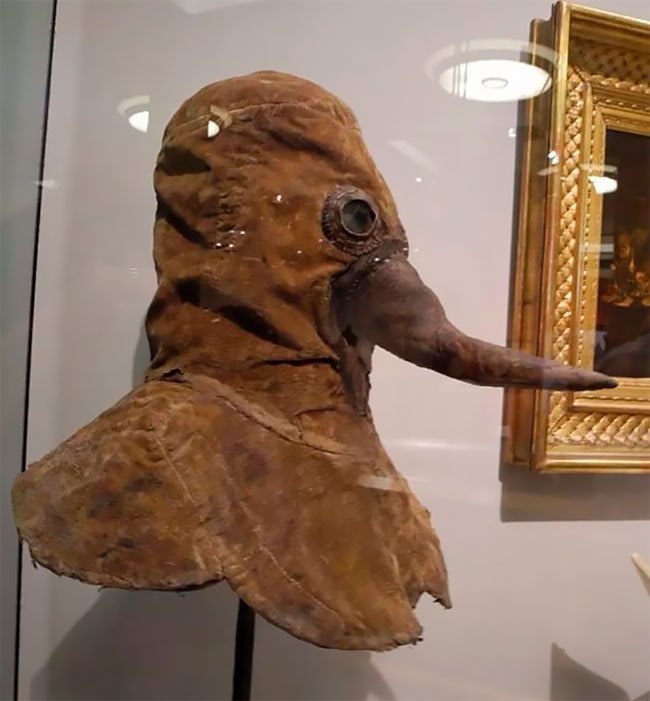 This costume was also worn by plague doctors during the Plague of 1656, which killed 145,000 people in Rome and 300,000 in Naples. The costume terrified people because if one saw it, it was a sign of imminent death. Plague doctors wore these protective costumes in accordance with their agreements when they attended their plague patients. 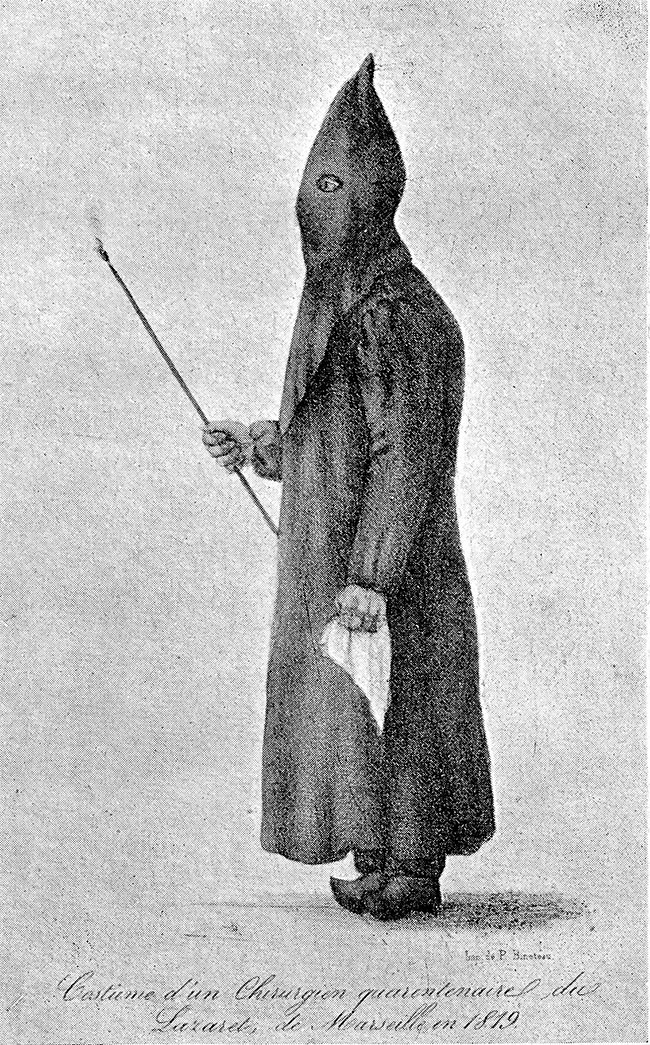 The plague doctor is arguably one of the most enigmatic figures to have emerged from the Middle Ages. These were European physicians who specialized in treating victims of the plague, the best known example being the Black Death . Plague doctors were public servants hired by villages, towns, or cities when a plague struck. 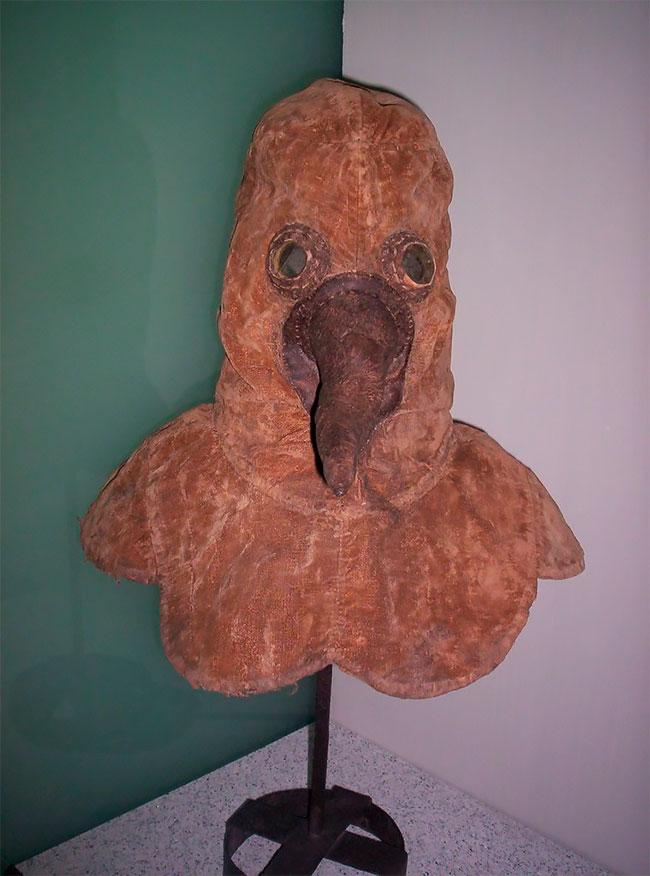 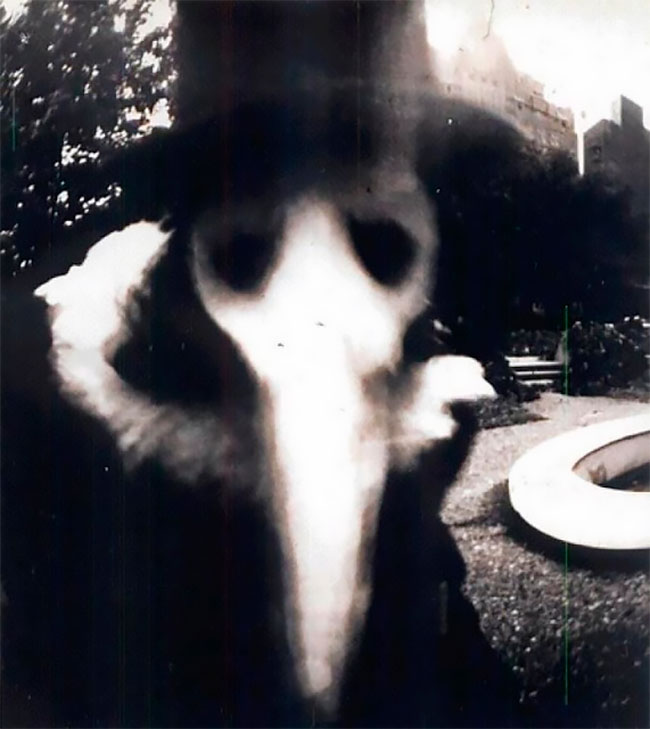