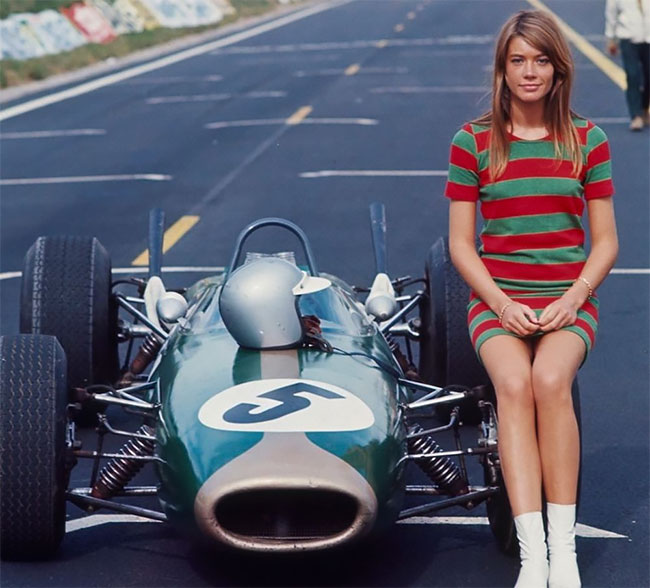 John Frankenheimer’s 1966 film, a fast-paced story of Formula One excitement, featured many genuine racing legends on set – and a young French singer by the name of Francoise Hardy… 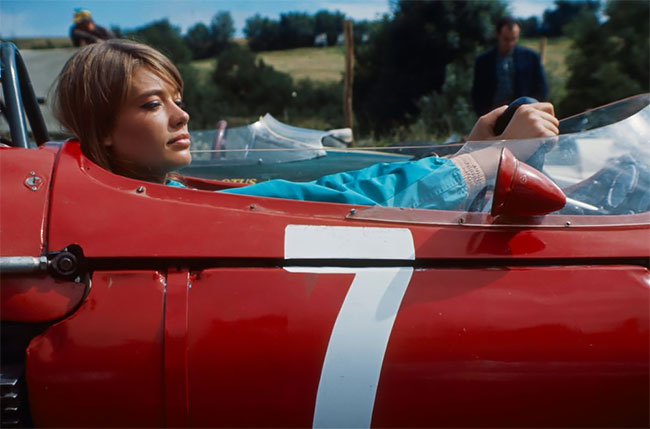 With James Garner, Eva Marie Saint, Yves Montand, Brian Bedford, Antonio Sabàto and Toshiro Mifune in starring roles, John Frankenheimer had put together an impressive international cast. Yet the real reason for the success of Grand Prix – one of 1966’s ten biggest box-office hits that year, winning three Oscars – was the thrill of the racing scenes, thanks in large part to help from Phil Hill: he captured real-life footage with on-board cameras at some 1966 Grands Prix, and also drove a GT40 camera car during the making of the film. Other big names making guest appearances on screen included Graham Hill, Juan Manuel Fangio, Jim Clark, Jochen Rindt and Jack Brabham. 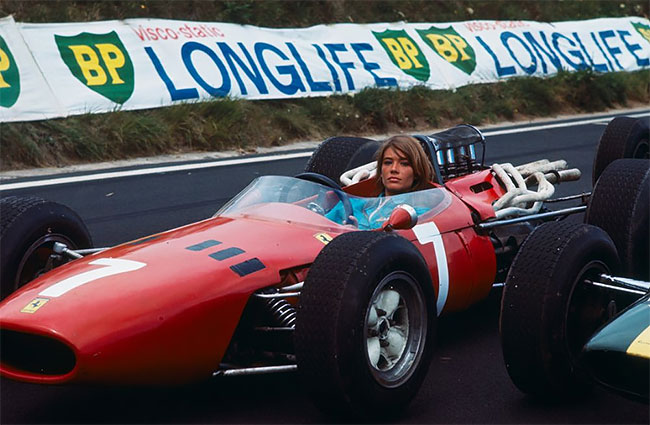 There was another reason for movie-goers to buy tickets, and that was the actress who took the role of driver’s girlfriend Lisa, namely the alluring Francoise Hardy. 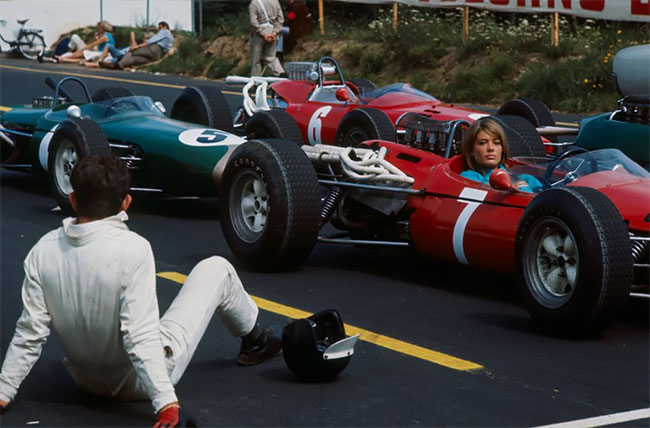 Her melancholy looks and gentle smile had already bewitched Mick Jagger and David Bowie, and on the set of Grand Prix, where she posed wearing the helmet of fellow actor James Garner, and at the wheel of a Ferrari, she likewise put the film crew under the spell of her innocent charm. 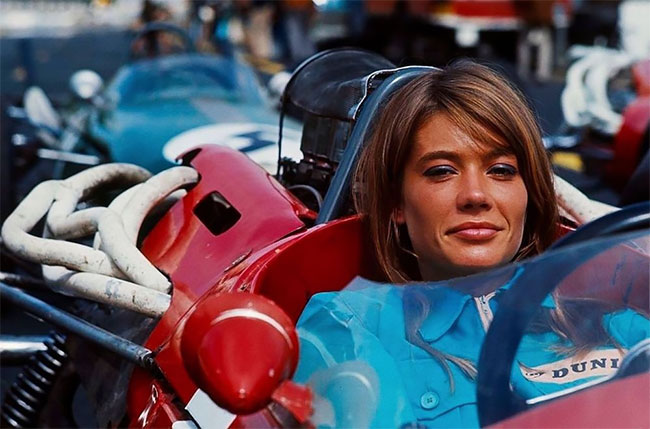 She actually suffered from severe stage fright and hated being the centre of attention; hence the picture below, in which she perches, somewhat lost-looking on a float to help launch the film in New York, is all the stranger. 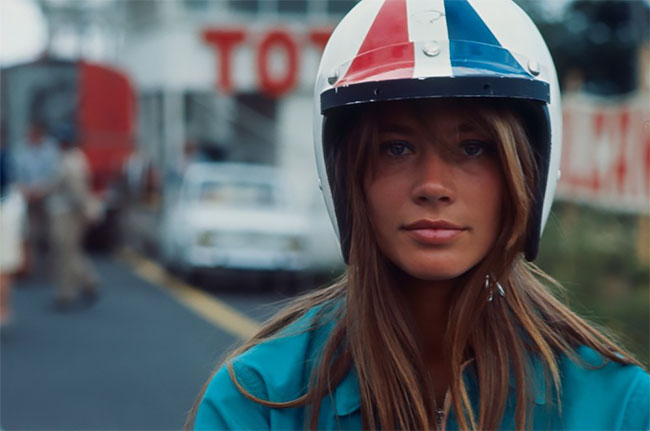 Francoise Hardy (b. Jan. 17, 1944) born in Paris is a singer-songwriter and actress. Her musical debut was in the early 1960s with the instant hit “Tous les garçons et les filles”. Hardy became a musical and fashion icon throughout the sixties during which time she made her film debut in Nutty, Naughty Chateau (1963) directed by Roger Vadim. Hardy starred in a leading role in the John Frankenheimer film Grand Prix (1966) after which she no longer wanted to make films but continued as a musician. 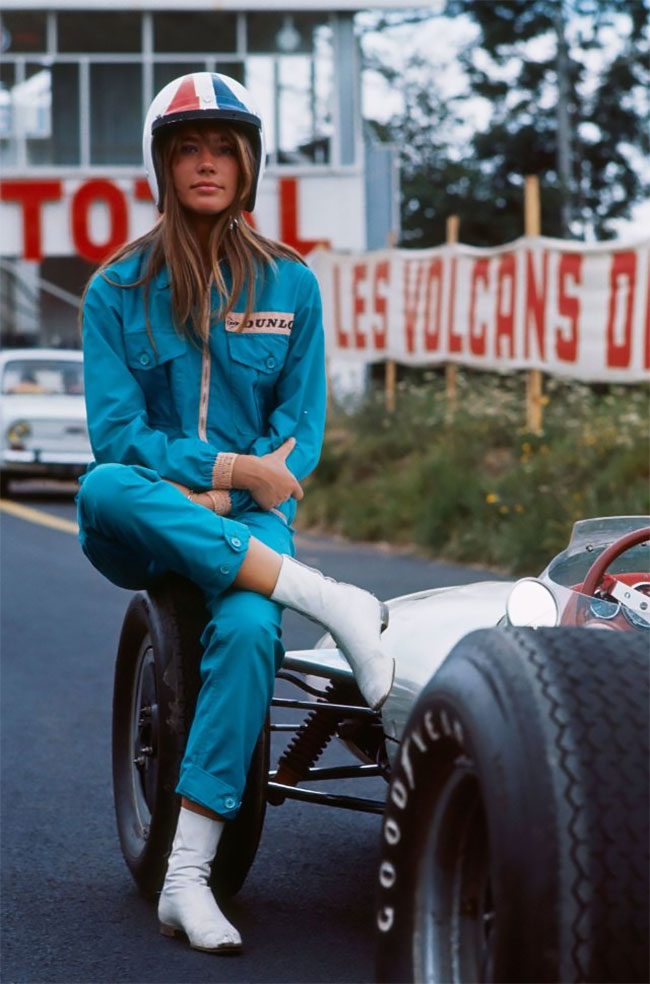 From the 1970s onwards, Françoise Hardy was only rarely seen in public, although she was still very much in the public eye thanks to her fashion photoshoots for Dior and Yves Saint Laurent. 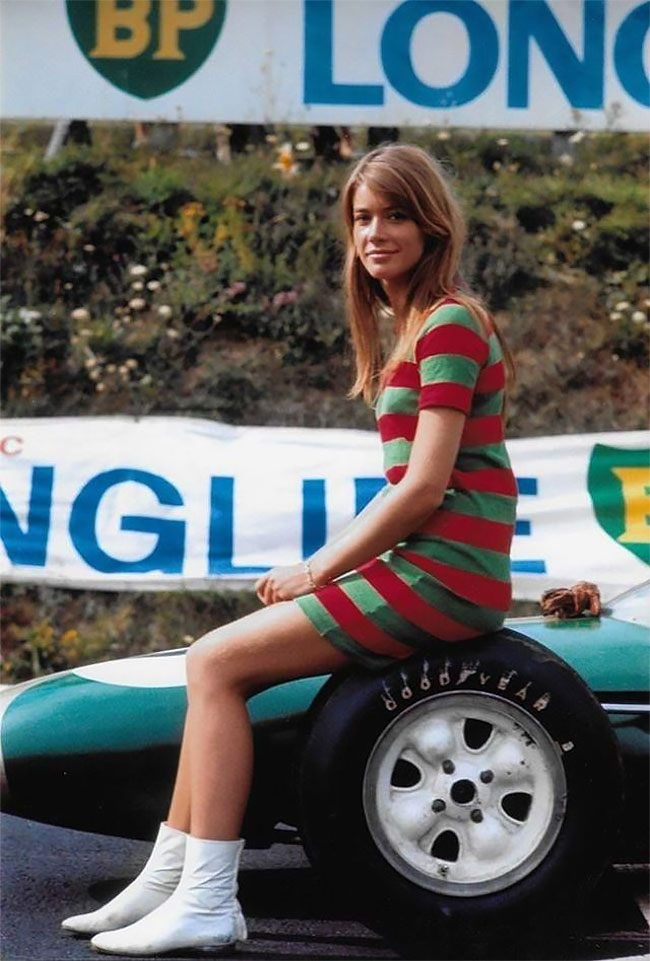 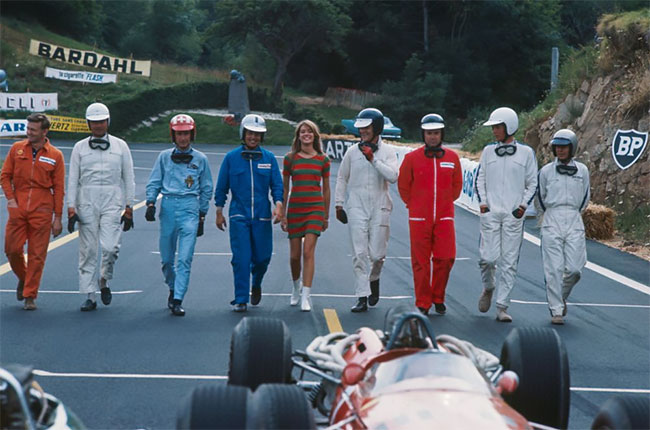 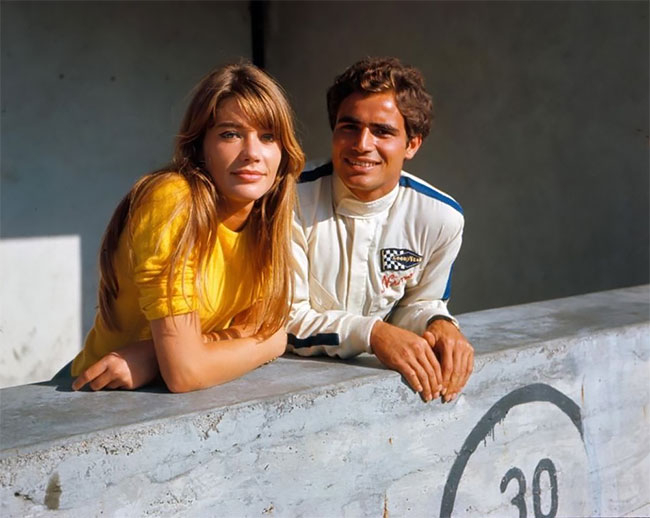 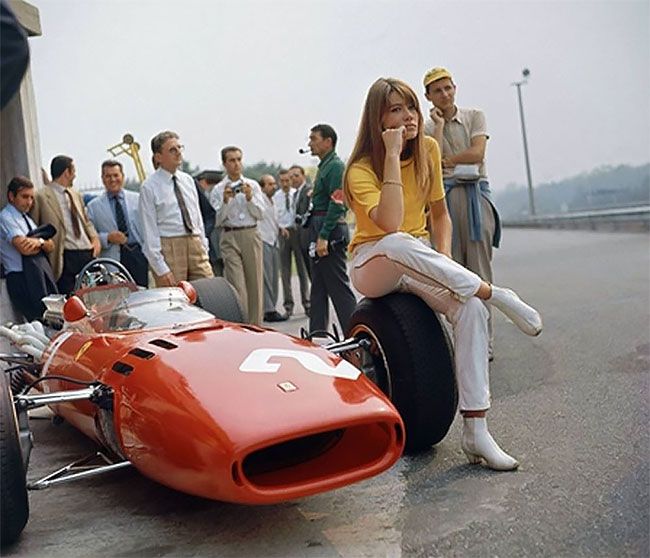 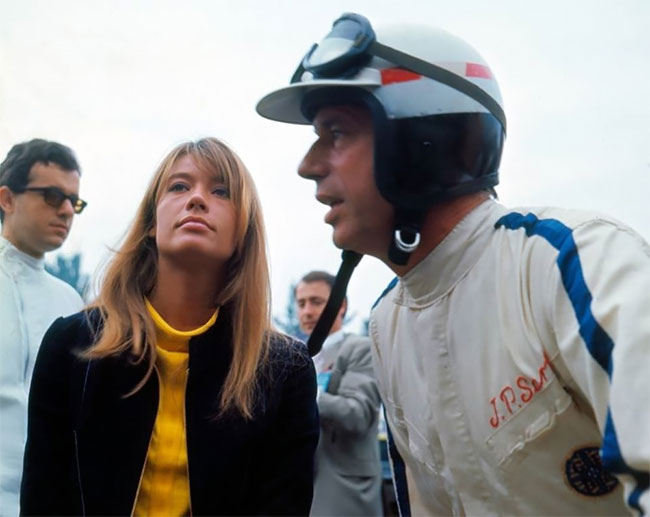 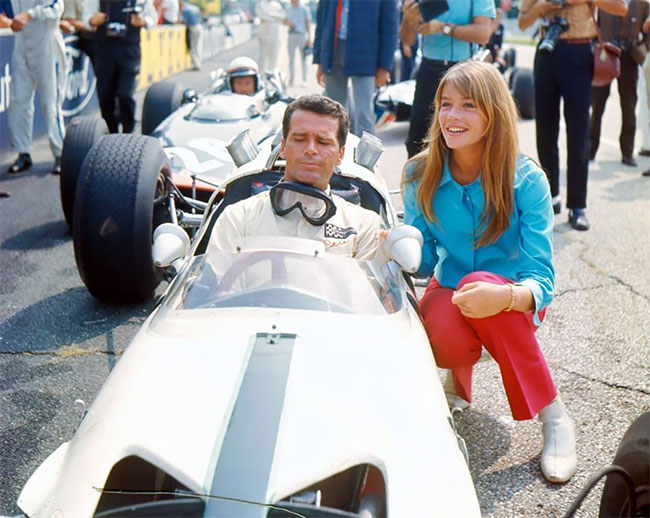 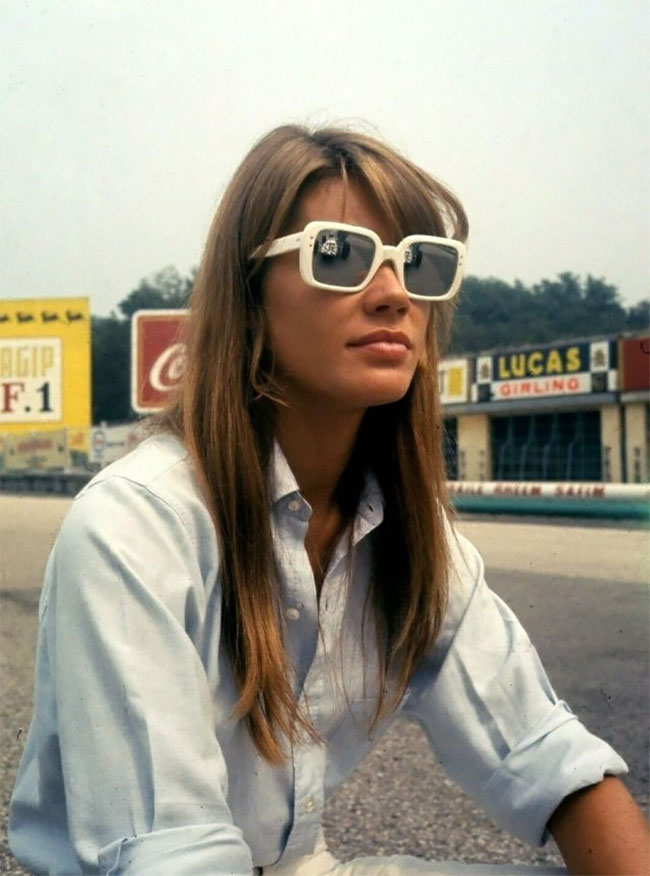 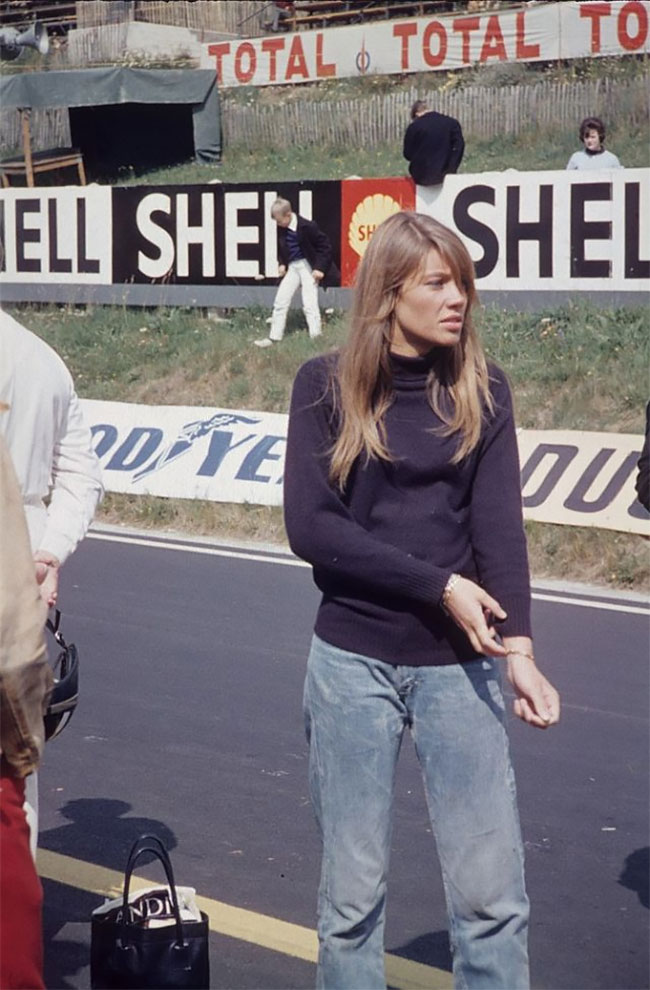 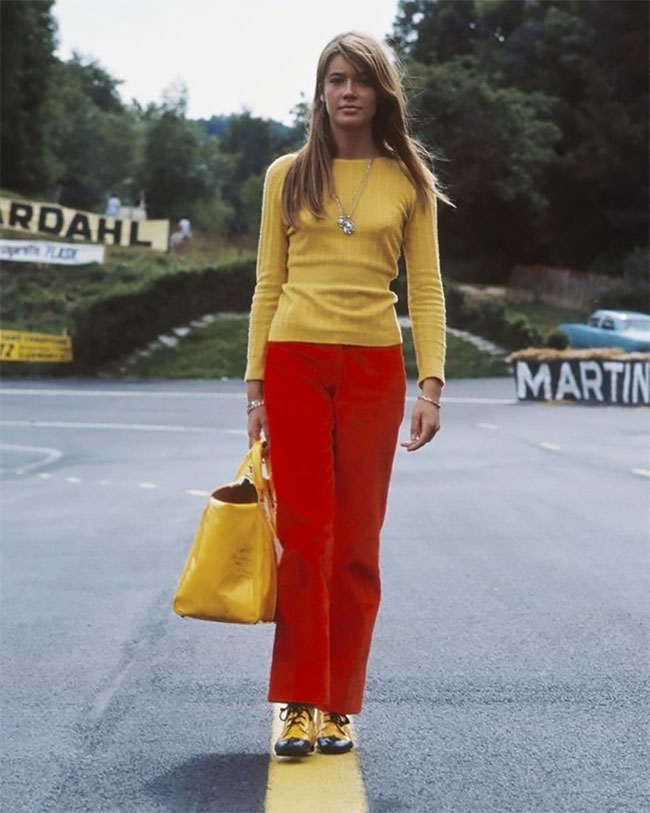 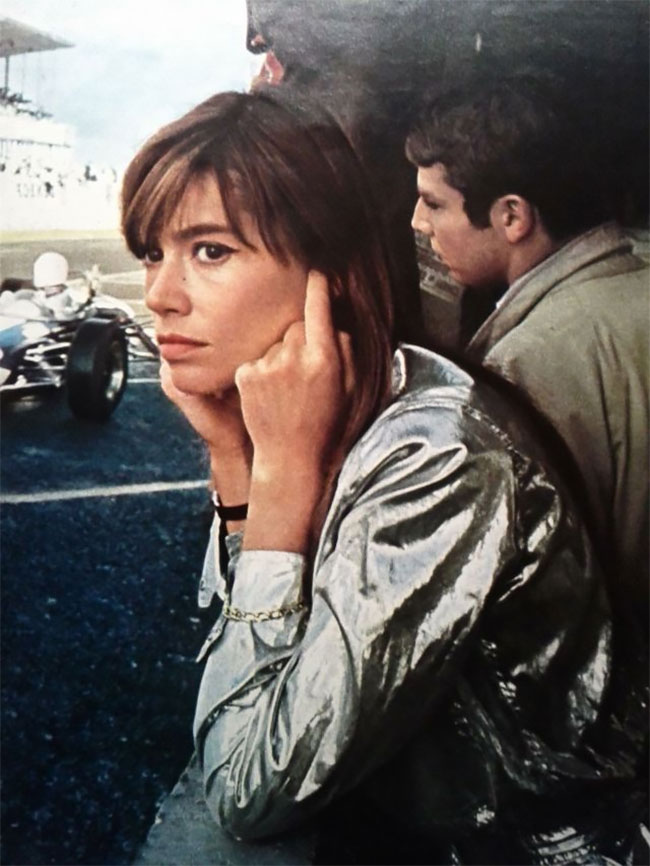 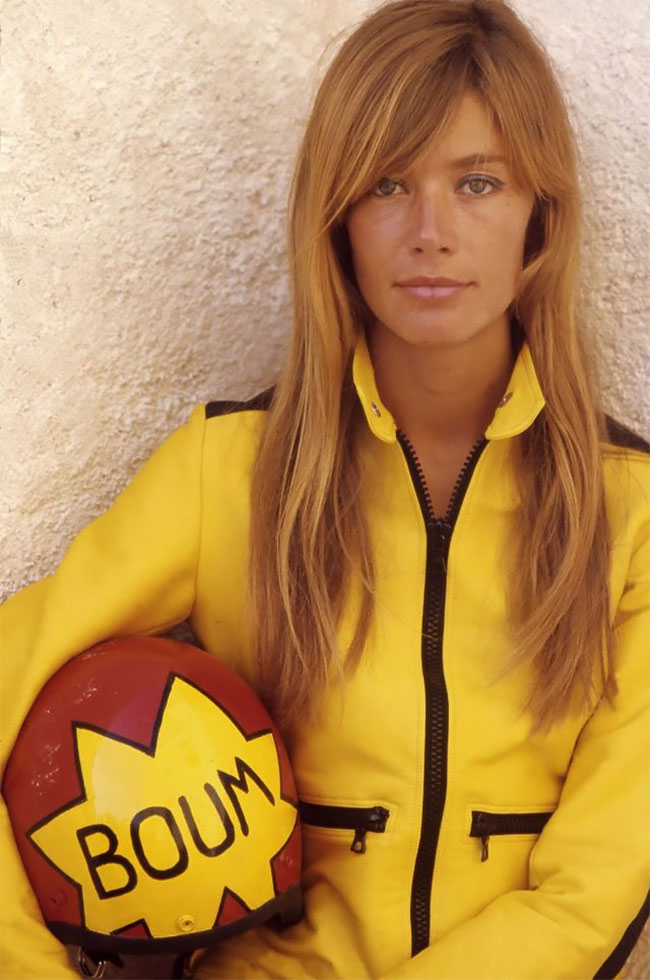 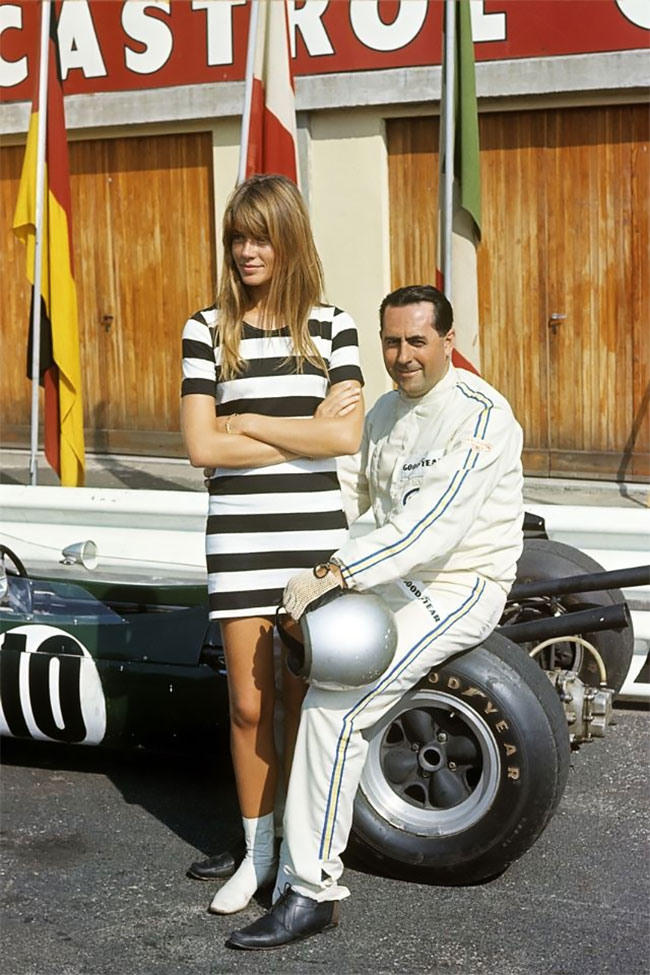 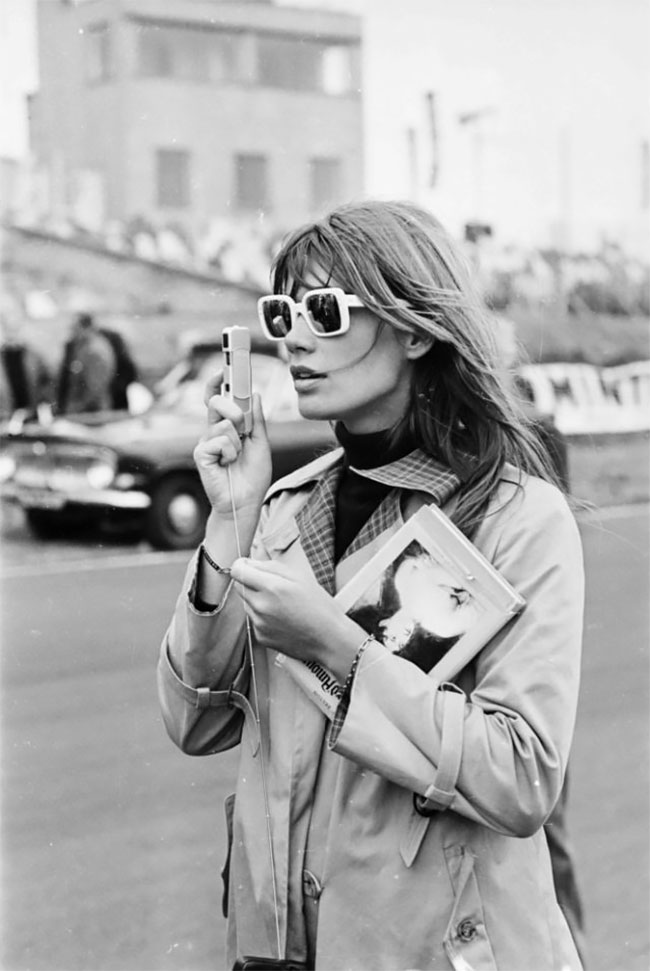 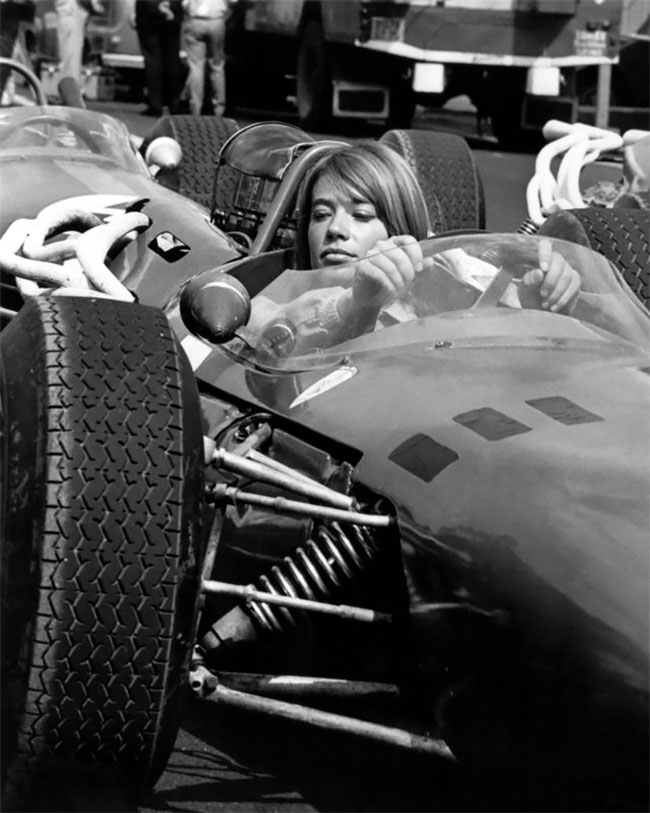 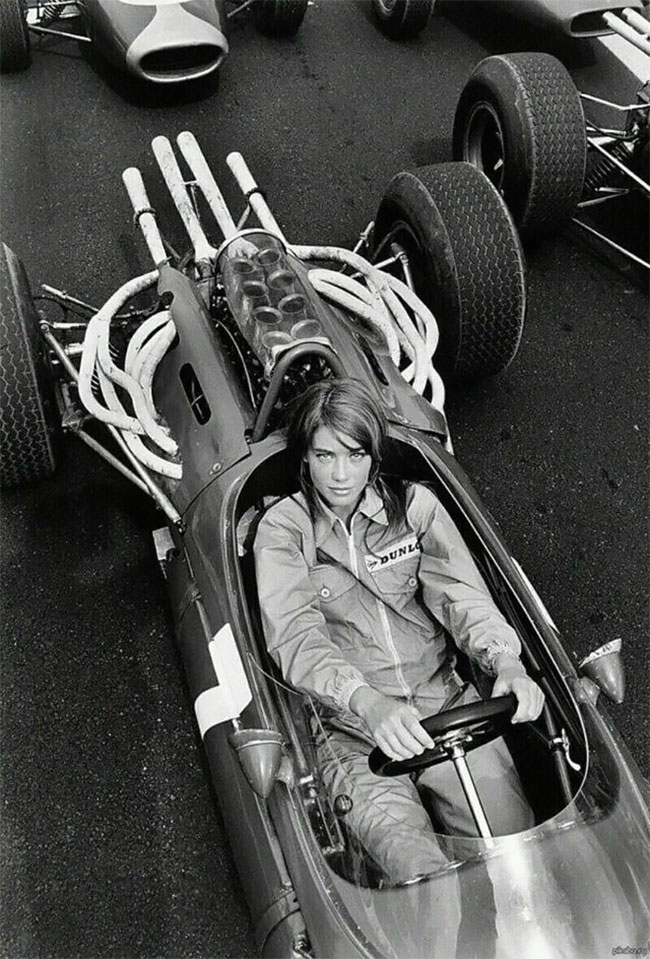 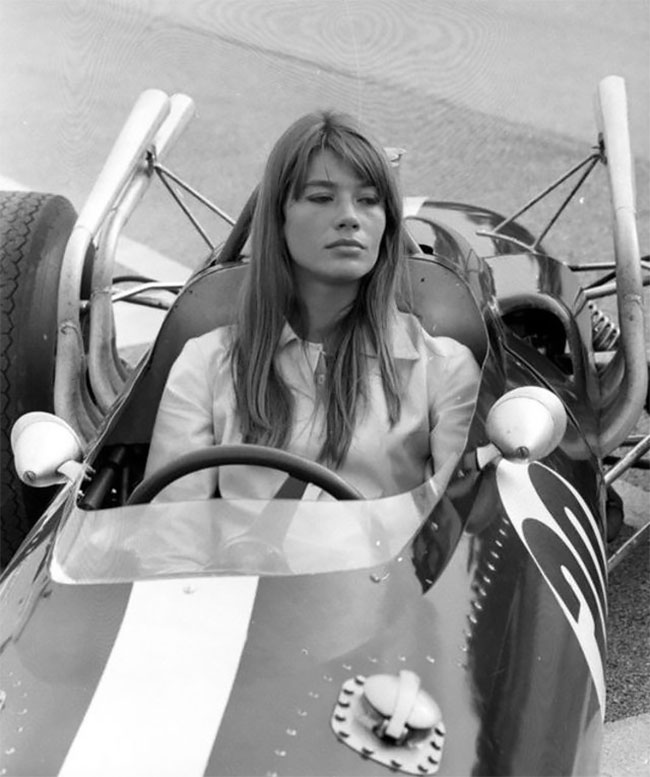 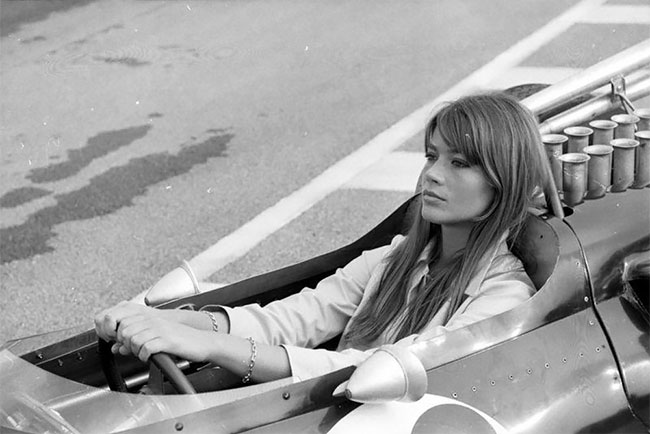 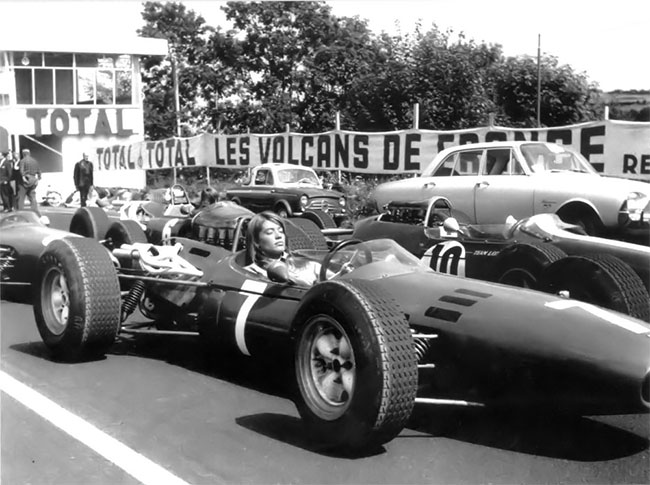 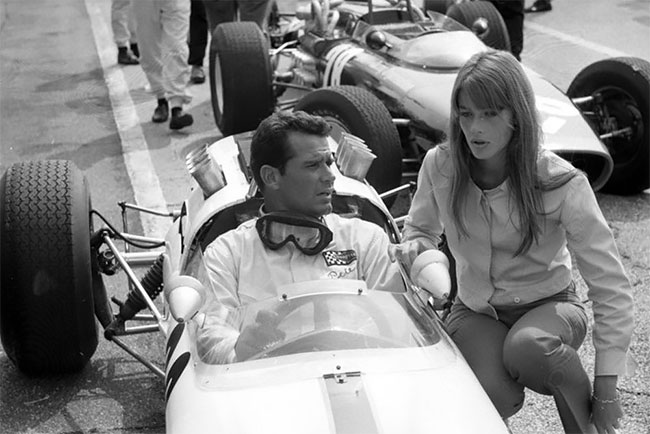 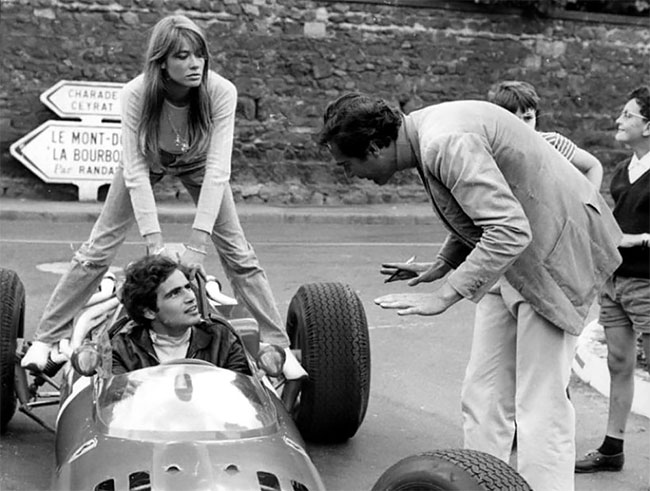 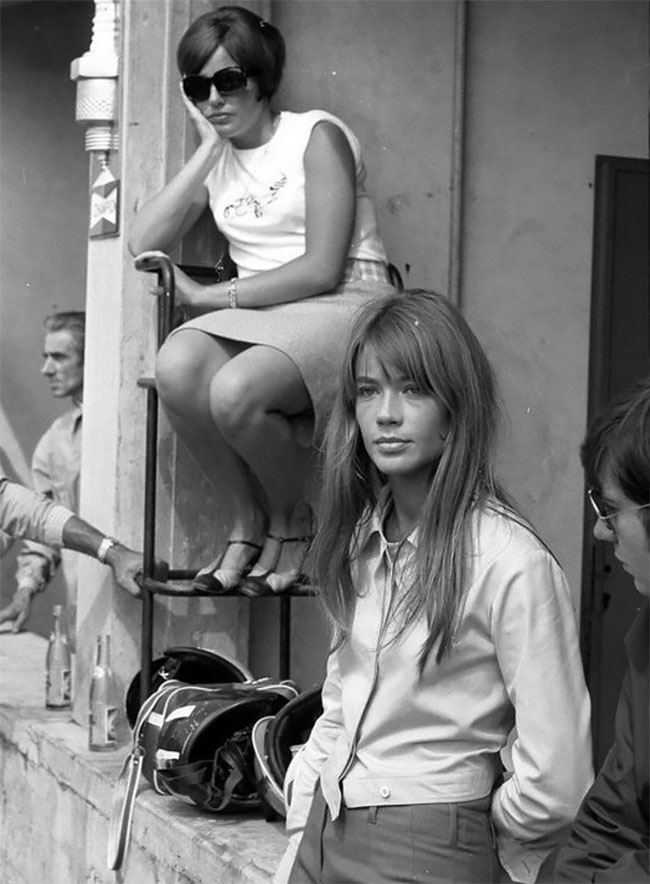 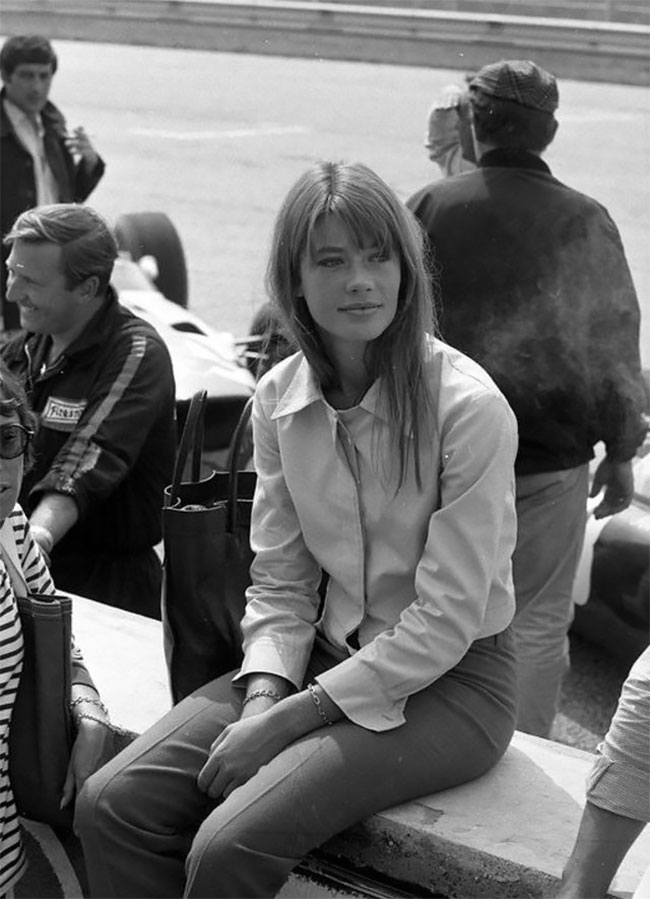 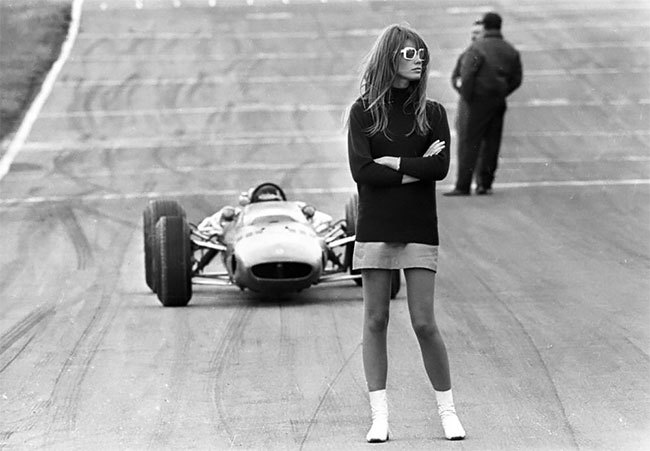 Stunning Colorized Photos Of Legendary Soviet Female Snipers From WWII, Including One Dubbed 'Lady Death' Who Killed 309 Nazis
David Bowie In Mustard Yellow Suit, Photograph By Terry O'Neill In 1974
Professional Ballerina Documents Her Pregnancy in Photo Series ‘Ballet Beautiful’
Daredevil Photographer And A Storm Chaser Captures Stunning Pictures Of Natural Disasters
In the Days Before Fridges: Vintage Photographs Show Butcher Shop Fronts In The Victorian Era
An Artist Confronts Depression with The Help of Photography
Chinese Artist Creates Creepy Celebrity Portraits Made From Other People’s Faces
"The Short And Tragic Romance": Photos Of Nancy Spungen And Sid Vicious Together In 1978
Romanian Photographer Captured Mesmerizing Images Of Bucharest Right After A Night Of Freezing Rain
Spectacular Winning Photos of the 2021 Underwater Photographer of the Year Contest
Best Photos From 2021 International Wedding Photographer Of The Year Contest
Photographer Took His Drone To Capture How People Are Dealing With Quarantine
"A Journey Guided By The Elements:" Surrealistic Reality In Photographs By Benjamin Everett
Paddle Through Breathtaking And Prize-Winning Underwater Photos Of The 2018 Ocean Art Contest
'The Hobbit' Cast with their Scale and Stunt Doubles
Two Sisters from Norway with Magical Photos Inspired by Nature and Music
Wildlife Shines Bright in the 2021 Nature TTL Photographer of the Year
Spectacular Vintage Photographs Of America’s Western Frontier By Timothy O’Sullivan
Award-Winning Shots From The 2012 Underwater Photo Contest
Inspired by Space 1999, a Miniature Volkswagen Space Transporter
Sullen Waters: The Surreal Poetic Photo Artworks Of Nádia Maria
If Movie Posters Told The Truth…
World Press Photo Contest 2019 Winners
Trees Of Hokkaido: Japanese Photographer Captures Trees In His Hometown, And Here Are 25 Of The Best Ones
1960s, actress, cars, Françoise Hardy, grand, movie, prix, retro

Woman Posed For An Epic Divorce Photo Shoot To Let Go Of The Past And Start Fresh
Haunting Photos Of Moscow’s Young Ravers And Their Lives After Dark
"Our Last Summer": The Superb Collages of Maria Luiza Zanelato
Stunning Winners Of The British Wildlife Photography Awards 2017
Chernobyl & Pompeii: 2018 Historical Photographer Of The Year Names Finalists
An Ongoing Portrait Series Of Off-Season Santas
Black and White Photos Show the ’80s Street Fashion Styles of Young People
Snowfall Makes Cars Happy: Someone Drew Eyes And Smiles On The Snow That Fell On The Cars
This Fascinating Photo Project Shows How Much Family Means To Every Single One Of Us
When Buick Offered Convertible Tops in Designer Fabrics in 1961
2007 ‒ 2023 by Design You Trust. Proudly hosted by WebHostingBuzz.
Privacy Policy · Terms of Service · Content Removal Policy ❤️ 🇺🇦