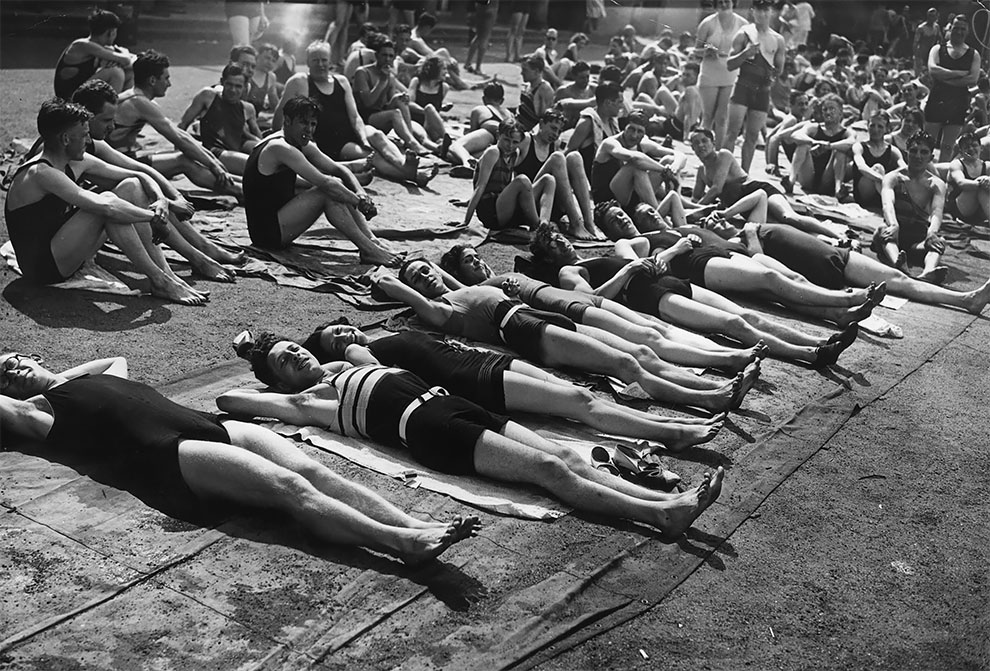 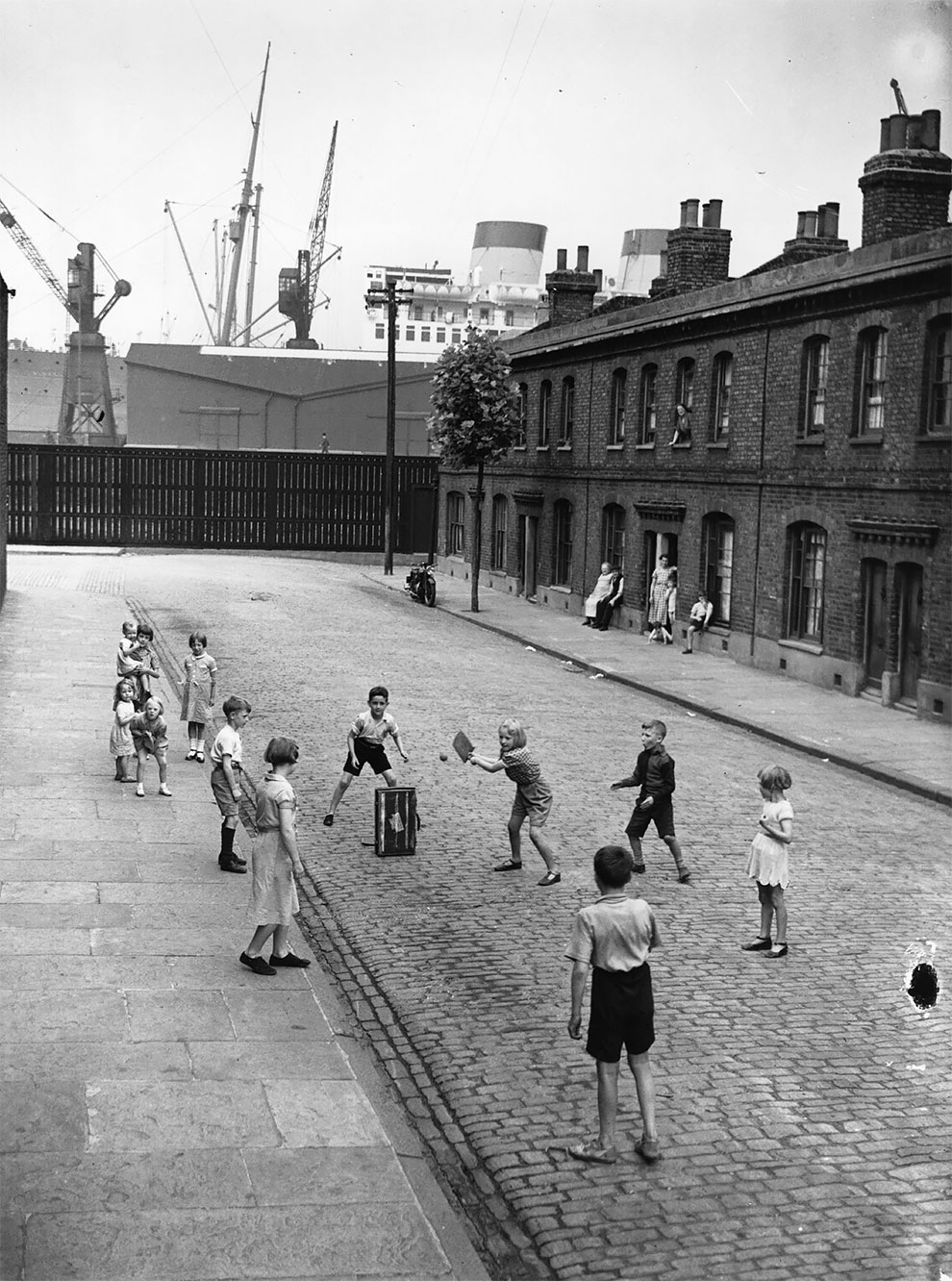 Children playing cricket in a street in Millwall, east London, UK 15th August 1938. A liner on the Thames is in the background. (Photo by Fox Photos/Getty Images) 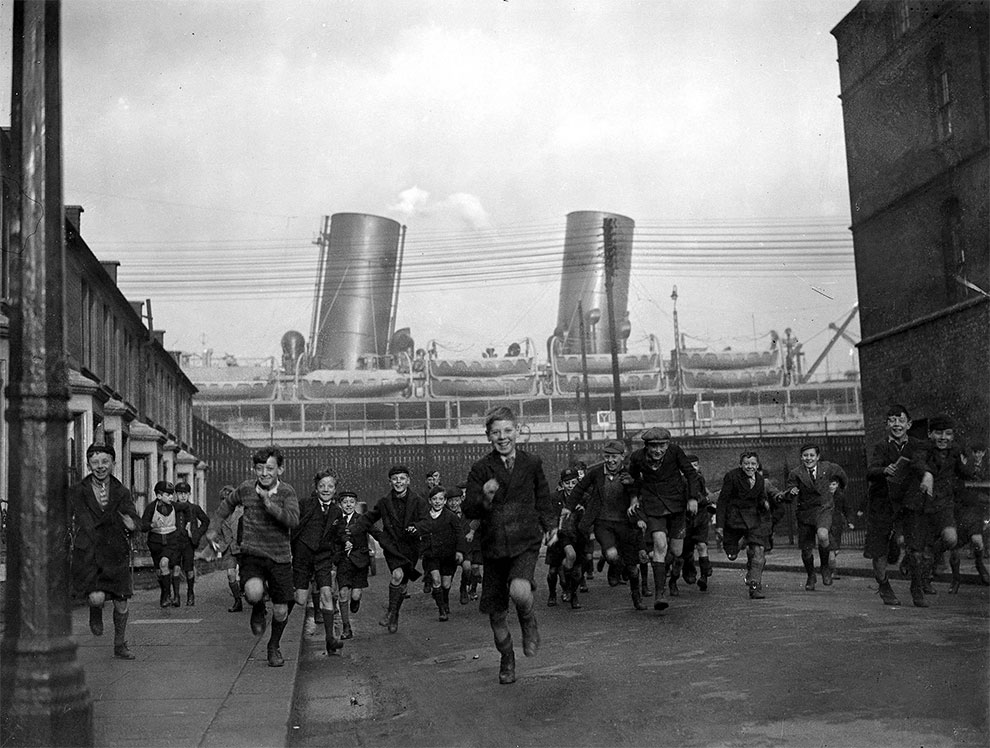 Children pour out of their School in Drew Street, Silvertown, in the east end of London, with the liner Rajputana in the background, 15th January 1932. (Photo by Popperfoto/Getty Images) 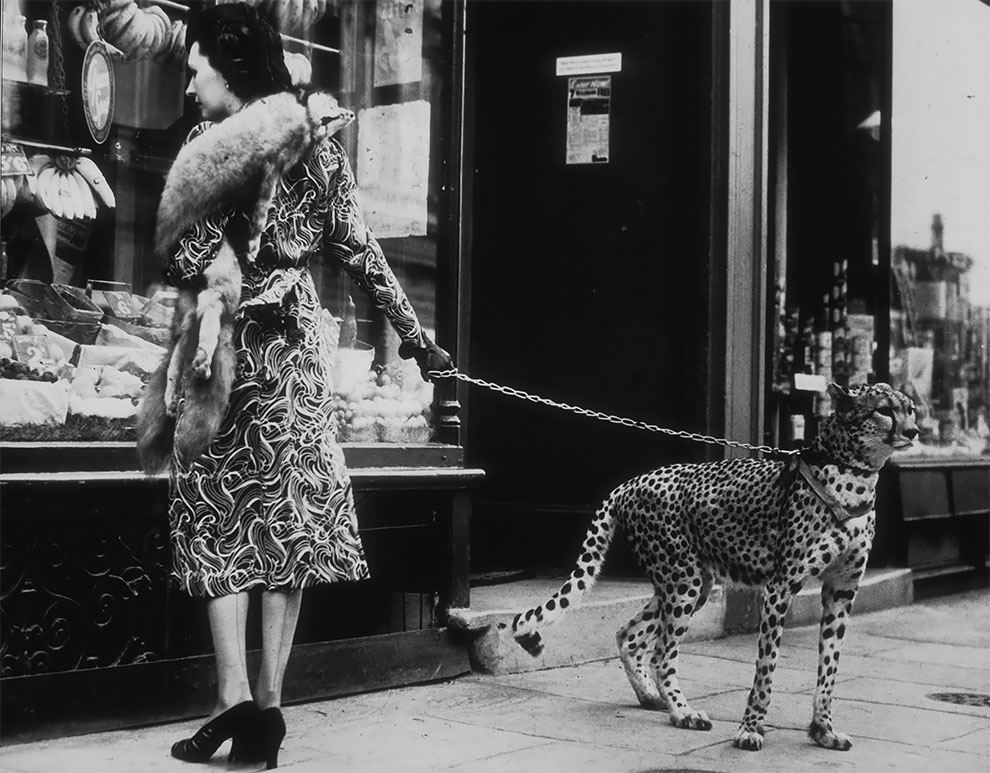 American silent film actress Phyllis Gordon (1889 – 1964) window-shopping in Earls Court, London on August 9, 1939 with her four-year-old cheetah who was flown to Britain from Kenya. (Photo by B C Parade/Getty Images) 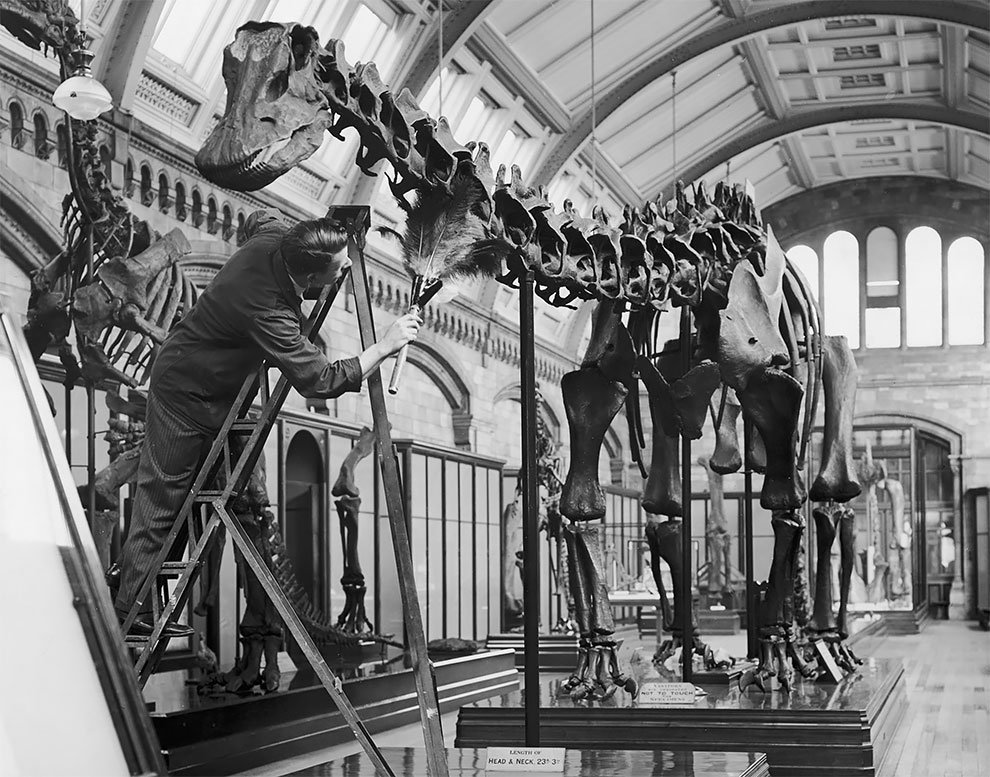 A cleaner dusts a cast of a dinosaur skeleton at the Natural History Museum in London, 12th November 1936. The cast was made from the D. Carnegiei diplodocus at the Carnegie Museum of Natural History, Pittsburgh, and was presented to the London museum in 1905. (Photo by William Vanderson/Fox Photos/Hulton Archive/Getty Images) 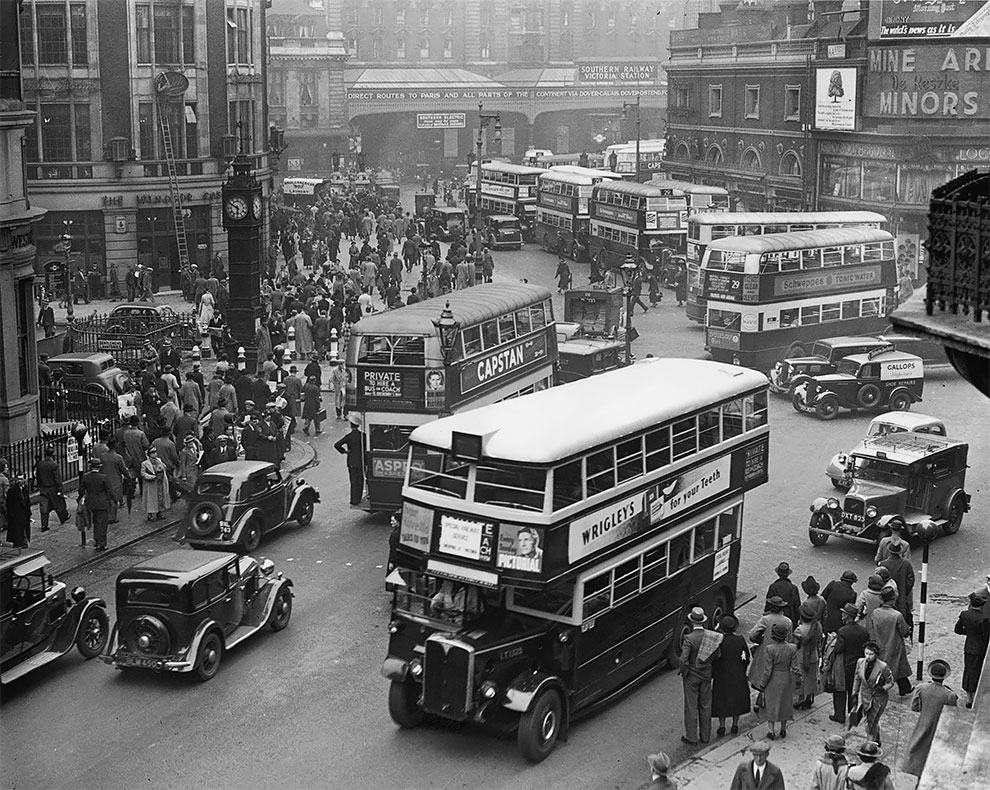 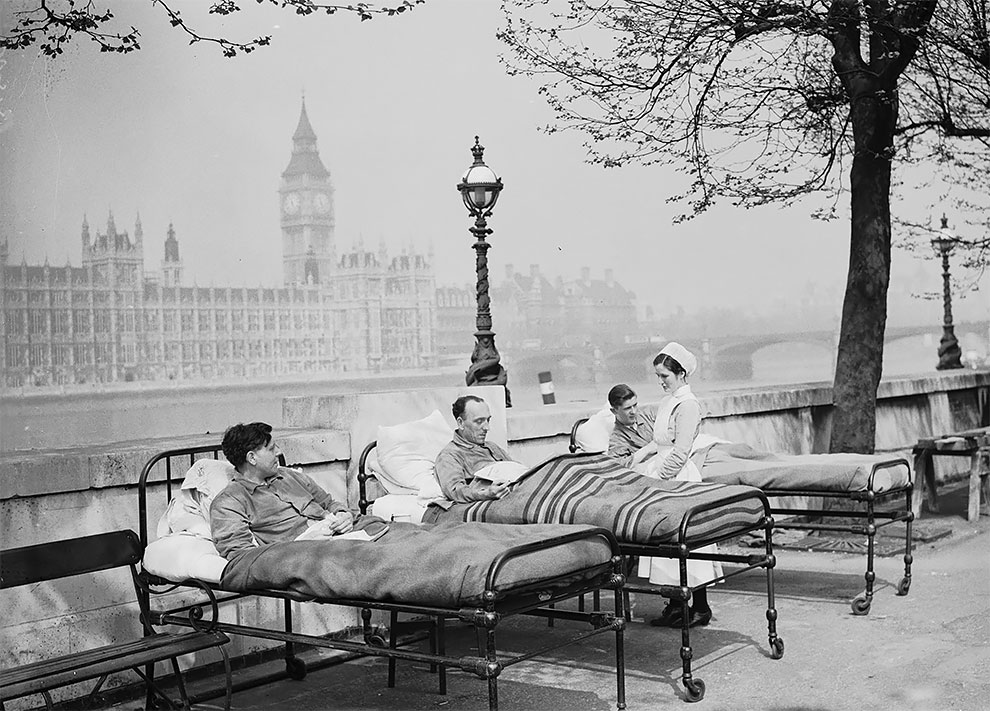 Tuberculosis patients from St. Thomas’ Hospital rest in their beds in the open air by the River Thames, opposite the Houses of Parliament. May 1936. (Photo by Fox Photos/Getty Images) 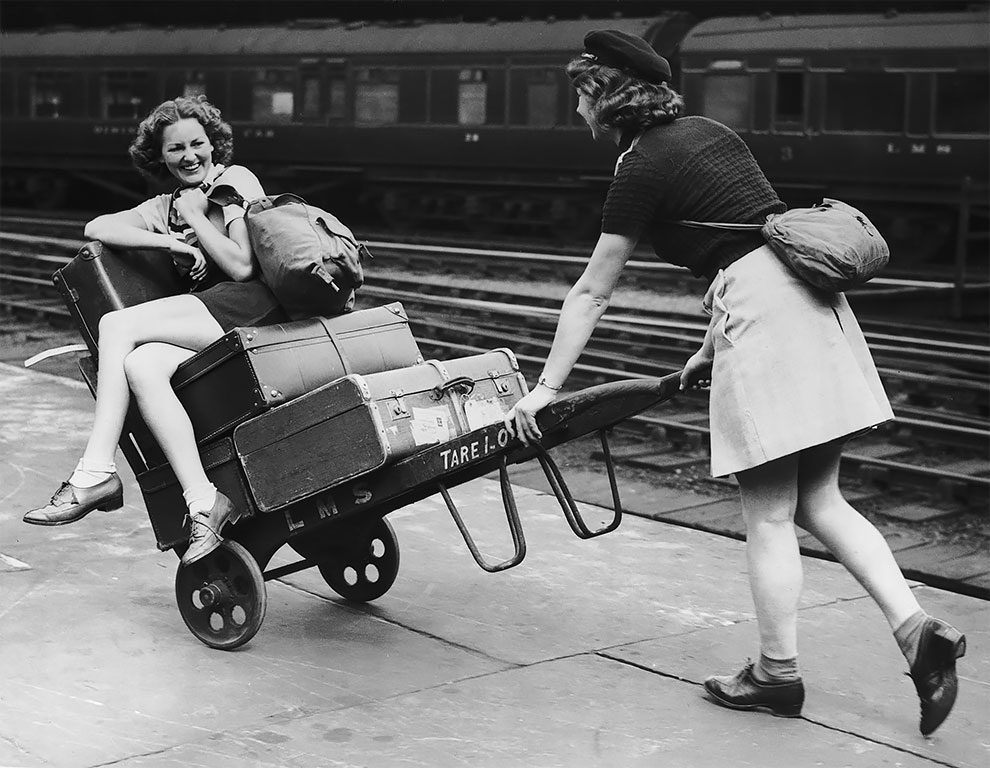 Two holidaymakers amuse themselves with a porter’s trolley whilst waiting for their train at Euston Station, London, 5th August 1939. (Photo by A. J. O’Brien/Fox Photos/Getty Images) 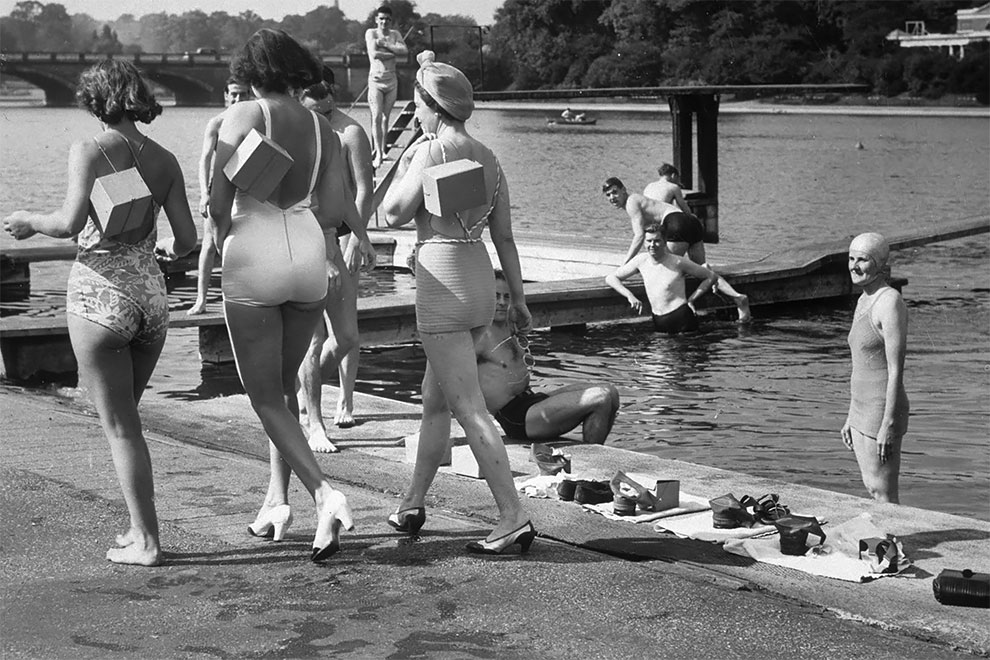 Three women pictured going for a swim in the Serpentine, Hyde Park, London, complete with their gas masks, 1930-1939. (Photo by Keystone/Getty Images) 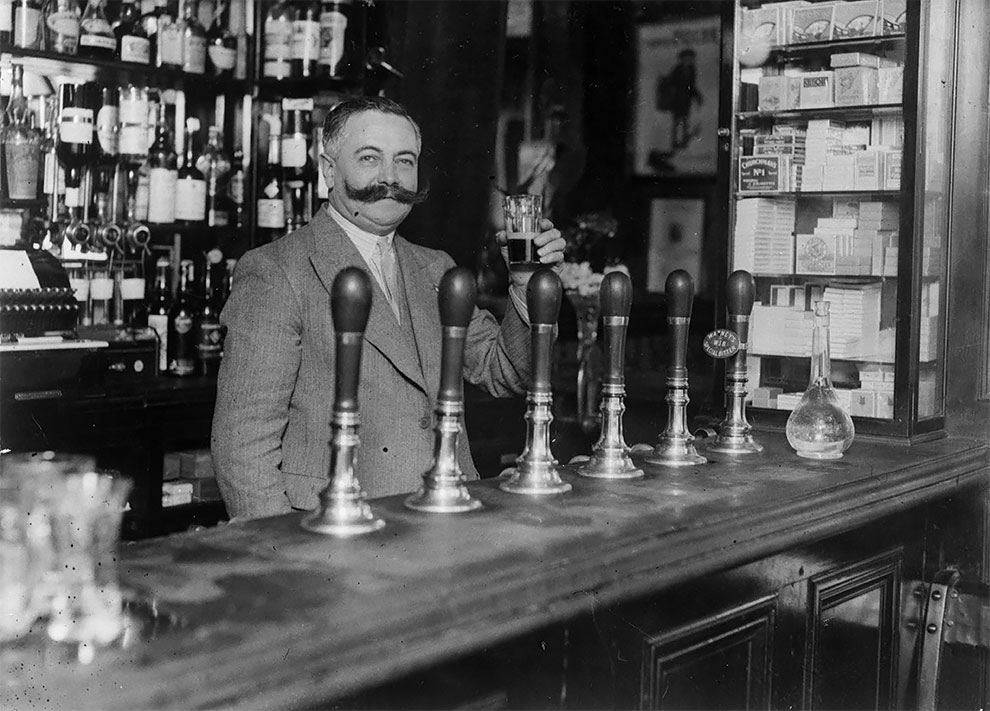 Victor Berlemont, a French publican working in an establishment of London’s Soho, circa 1939. (Photo by General Photographic Agency/Getty Images) 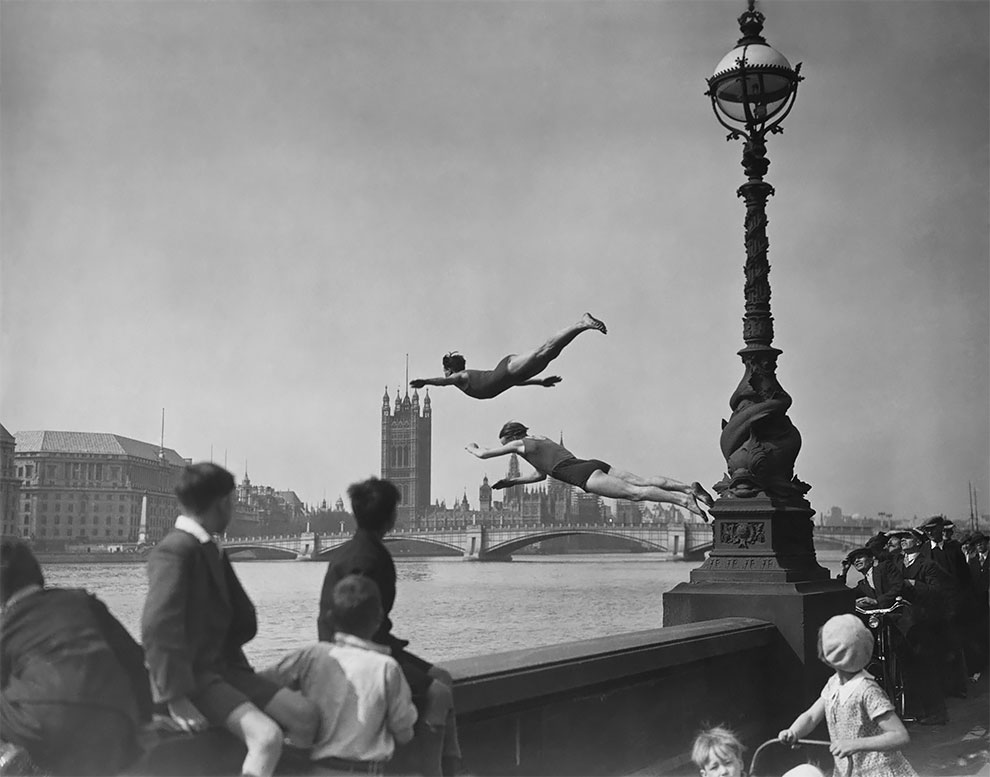 Two divers jumping off the Embankment into the River Thames in London, near Westminster Bridge on May 13, 1934. (Photo by H. F. Davis/Getty Images) 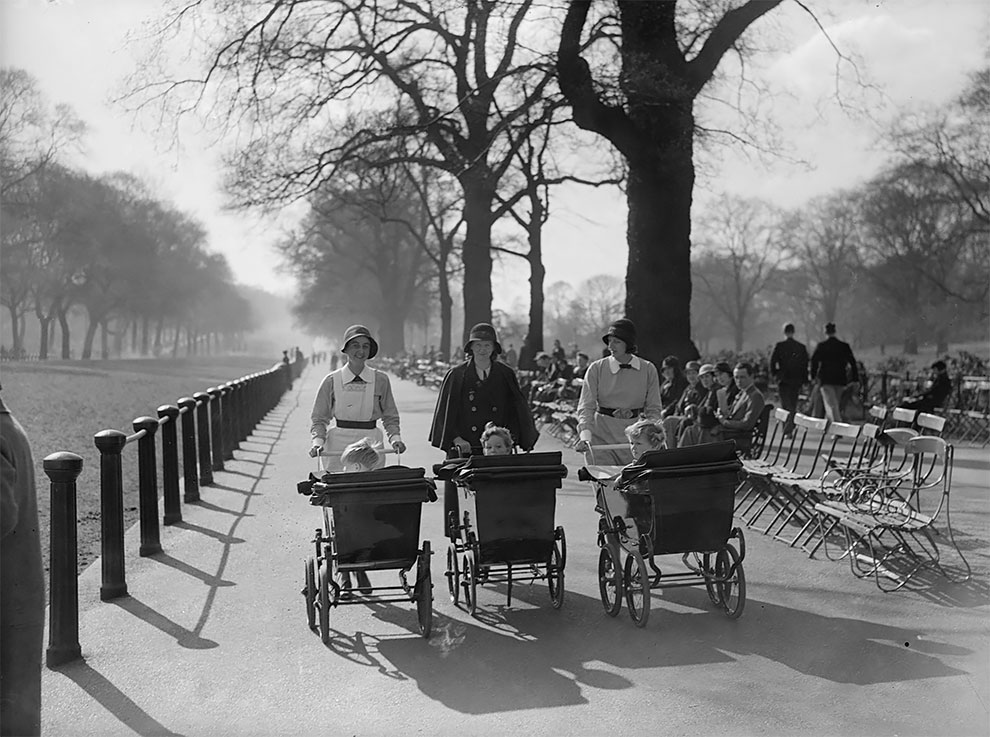 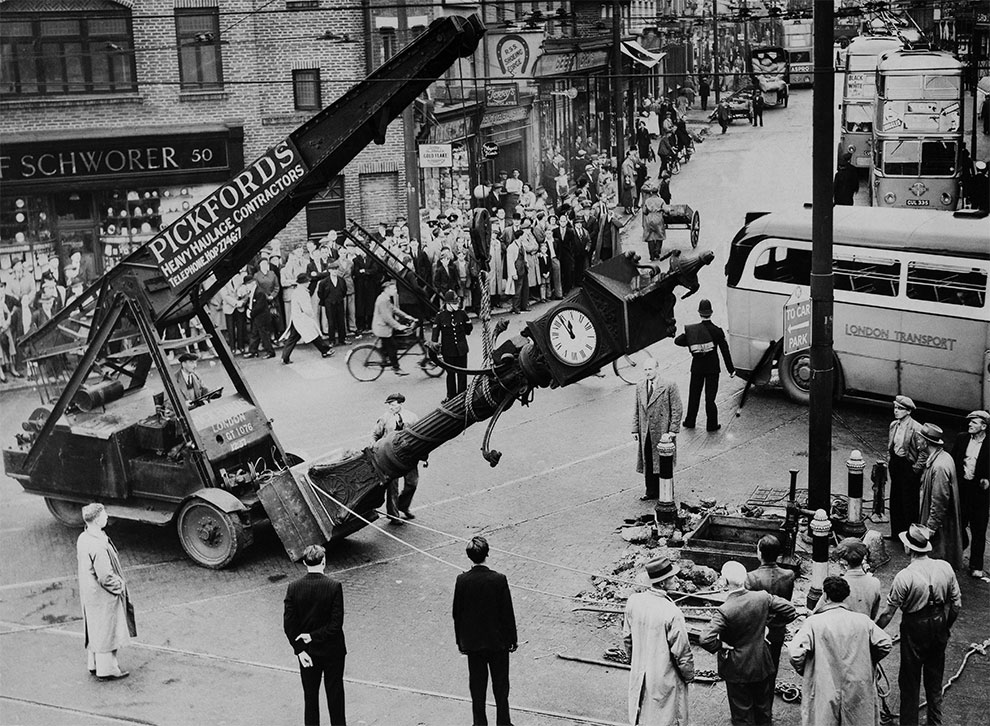 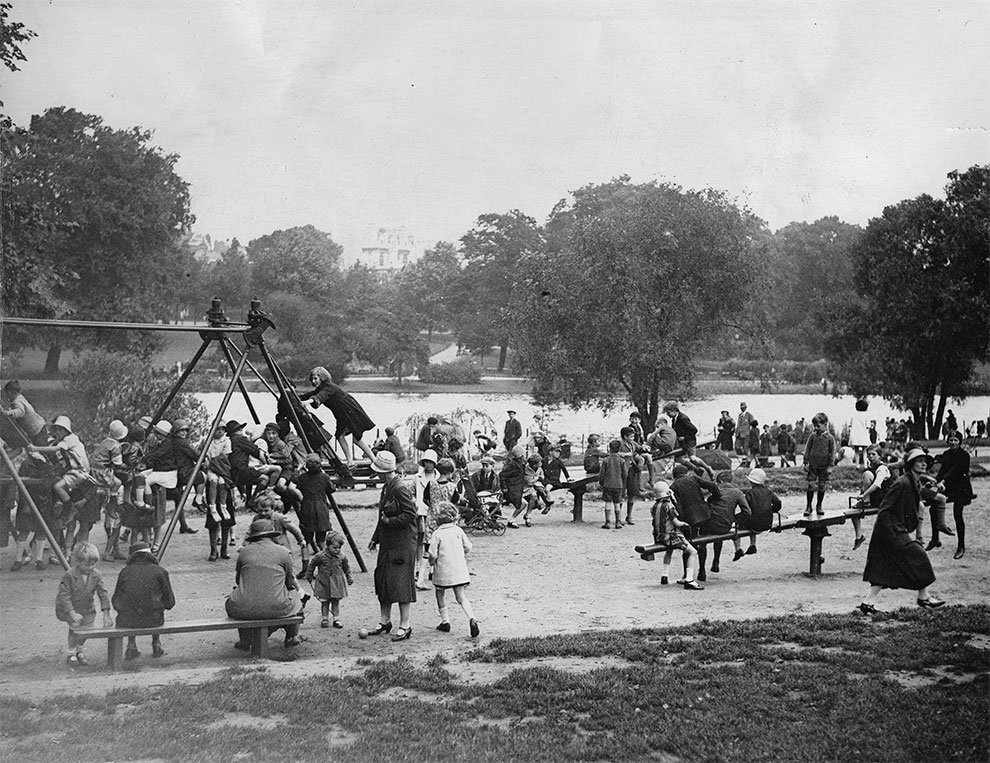 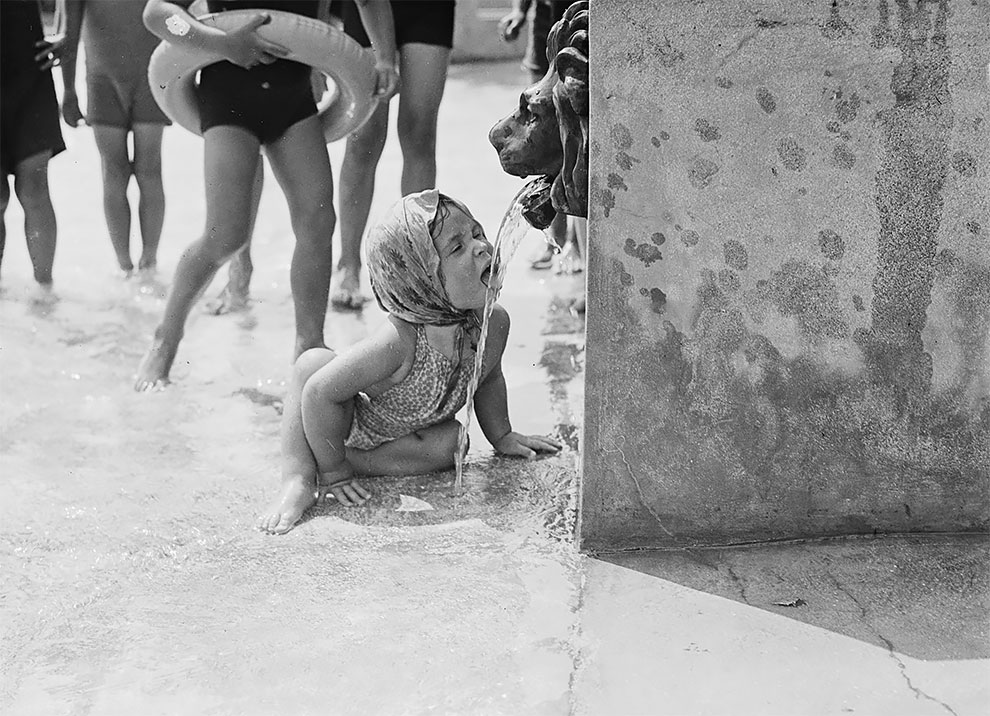 A photograph of a little girl drinking from a fountain with a lion’s head at Finchley Swimming Pool, London, taken by Tomlin for the Daily Herald newspaper on 6 August, 1937. (Photo by Daily Herald Archive/SSPL/Getty Images) 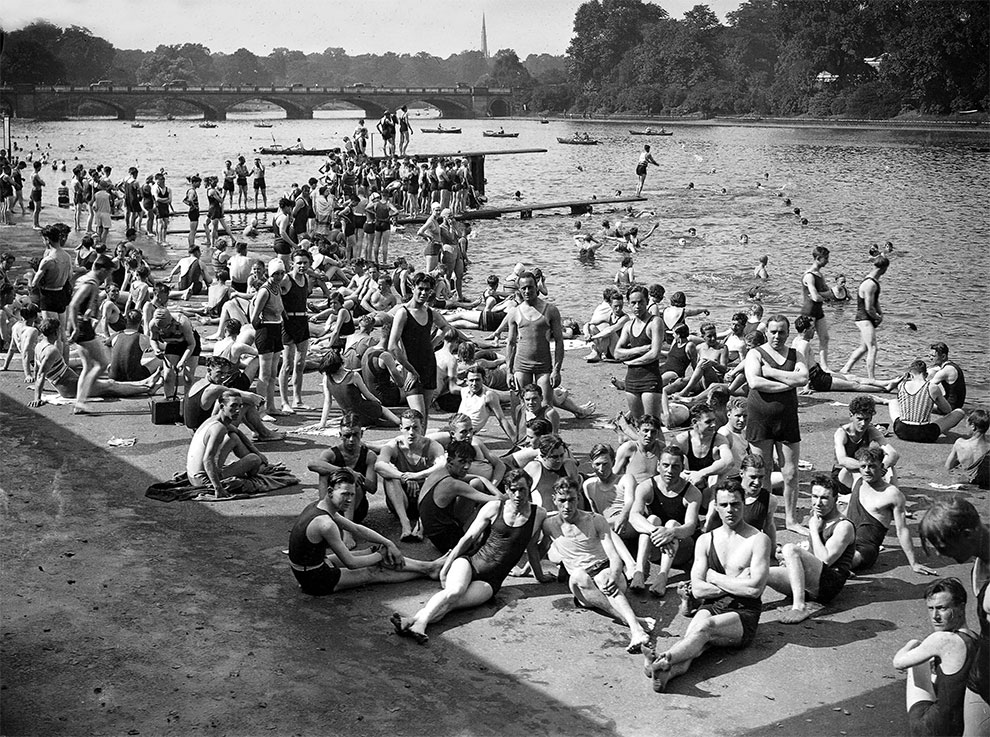 A crowd of people wearing swimwear bathing in the Serpentine during the high temperatures in London’s Hyde Park, 27th August, 1930. (Photo by Popperfoto/Getty Images) 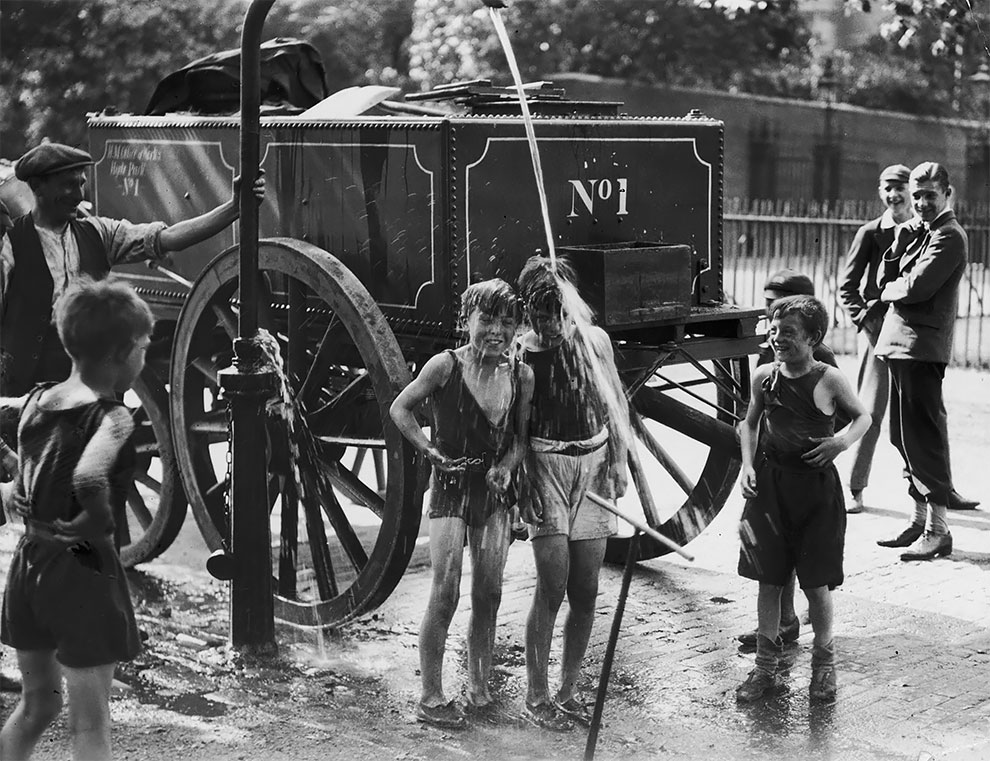 A water cart man turns the water main on a group of boys to help them cool off in a street in Westminster, London on August 1930 during a heatwave. (Photo by Fox Photos/Getty Images) 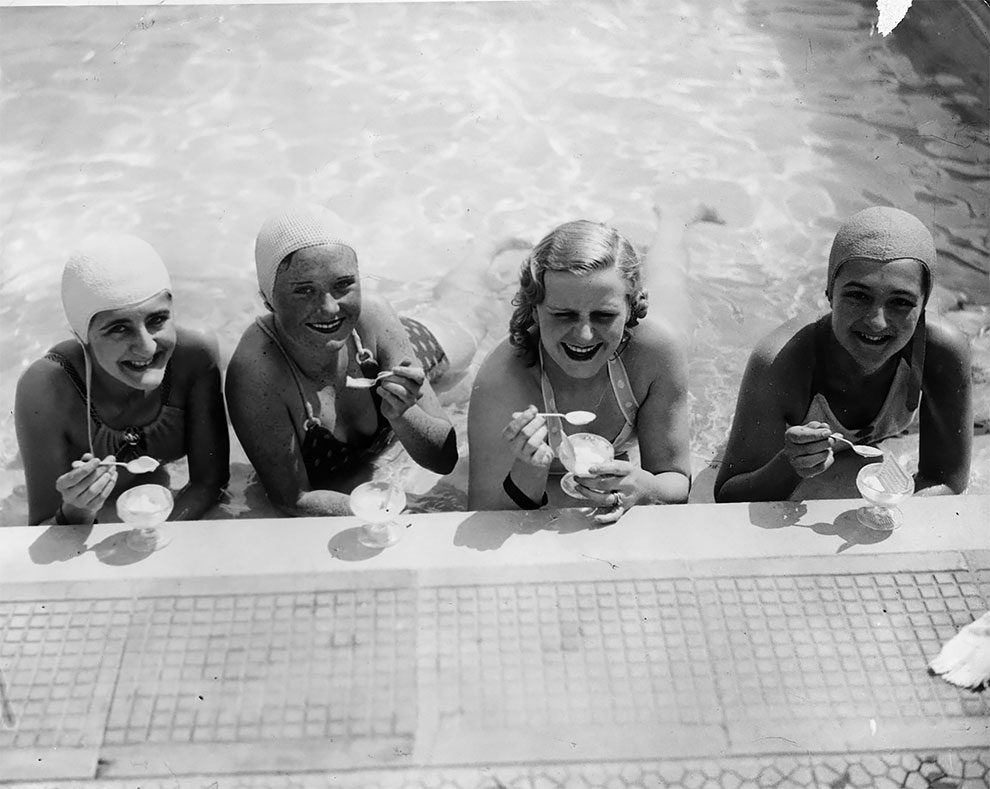 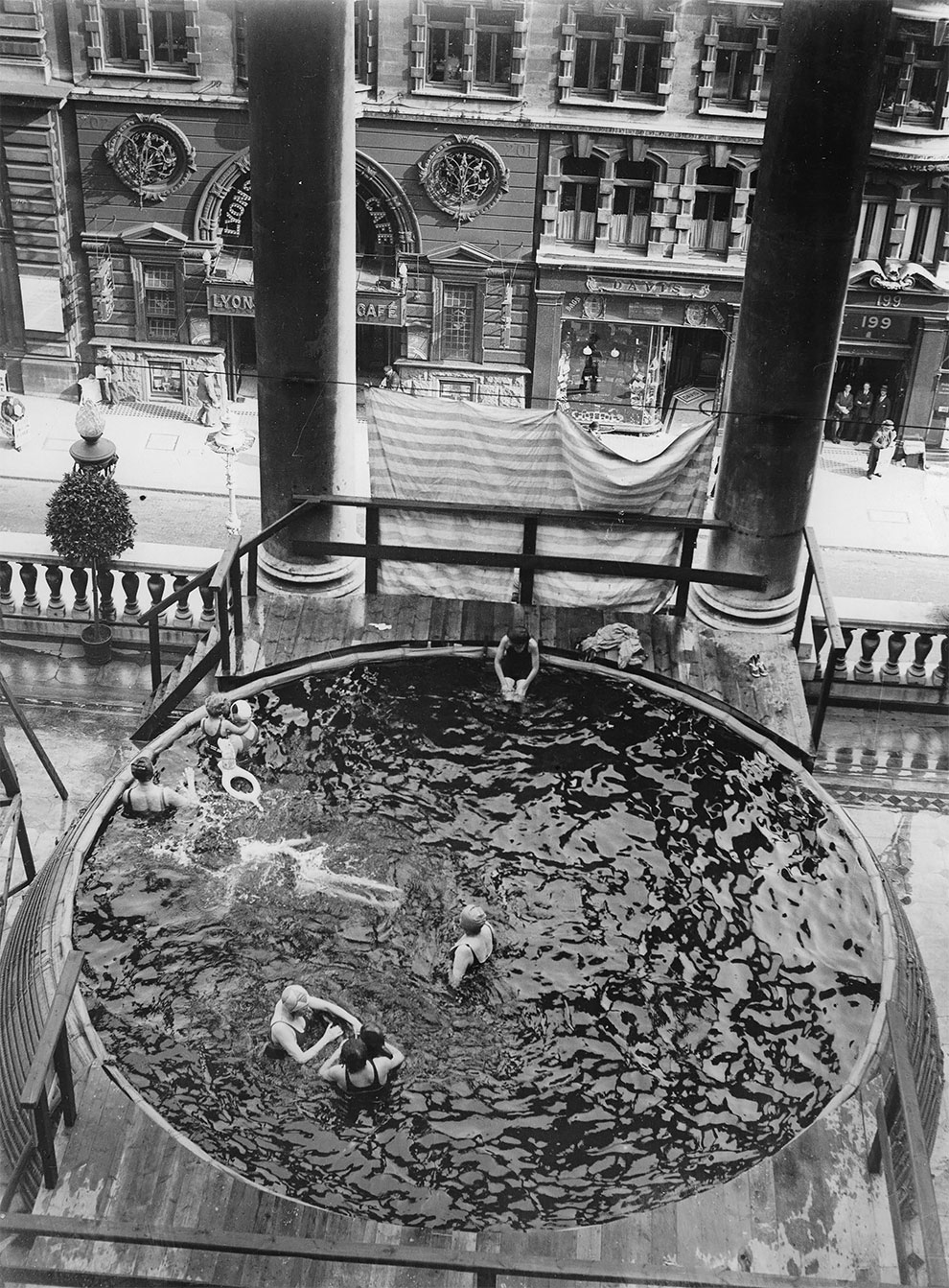 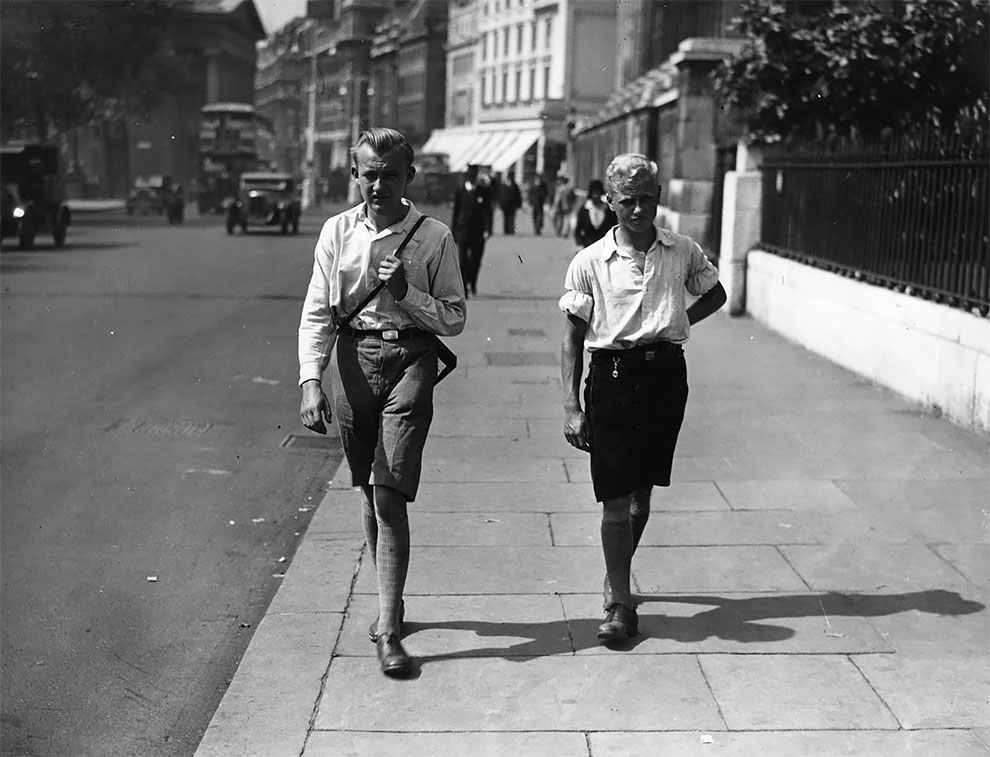 Two young men out for a walk wearing shorts because of a heatwave in London, 1932. (Photo by Getty Images)

Pregnancy In Tents Photo Essay
A Celebration Of British Wildlife: Spectacular Winners Of The Wildlife Photography Awards 2019 Contest
"A Journey Guided By The Elements:" Surrealistic Reality In Photographs By Benjamin Everett
Poetic, Emotional and Minimalist Photographs by Kersti K
Donald Trump Really Doesn't Want You To See These Photos
Honest Illustrations That Show How Our Lives Look Like Among Phones, Tablets And Notebooks
A McDonald's in New Zealand Lets Diners Eat Inside a Decommissioned Airplane
Photos of 40 Scariest Santas of All Time
The Atlas of Beauty: Photographer Mihaela Noroc Provides a Rare Look at Women in North Korea
"Graphemic Synesthesia": Artist Duo Spent 2 Years Photographing ‘Colored’ Letters To Show How They See Them
Hilarious Photos Of Chinese Grandmother Posing Like A Model
This Photographer Doesn’t Just Take Women’s Portraits. She Makes Them Believe In Themselves
The Fascinating Giuseppe Arcimboldo's Portraits Made out Of Fruits, Vegetables and Fish, 1563-1591
Winning Photos Of The 2017 National Geographic Nature Photographer Of The Year Contest
Here Are The Winners Of The 2016 iPhone Photography Awards
Amusing Illustrations That Share Insights About Everyday Life And Psychology
Sensual Fine-Art Portrait Photography By Berta Vicente
Beautiful Female Portrait Photography By Caio Borém
Cyberpunk Neon Fantasy: Moscow’s Outskirts As You’ve Never Seen Them Before
Photographer Emily Lauren Wants To Change The Way We See Female Beauty
Rock ’N’ Roll On Wheels: 30 Photos Of The Coolest Customized Vans Of The 1970s
Mugshot Models: A Selection Of Images Showcase The Most Glamorous Mugshots Found Online
Baby Face in Famous Paintings
"Polyester" by Alex Prager
1930s, daily, life, london, retro