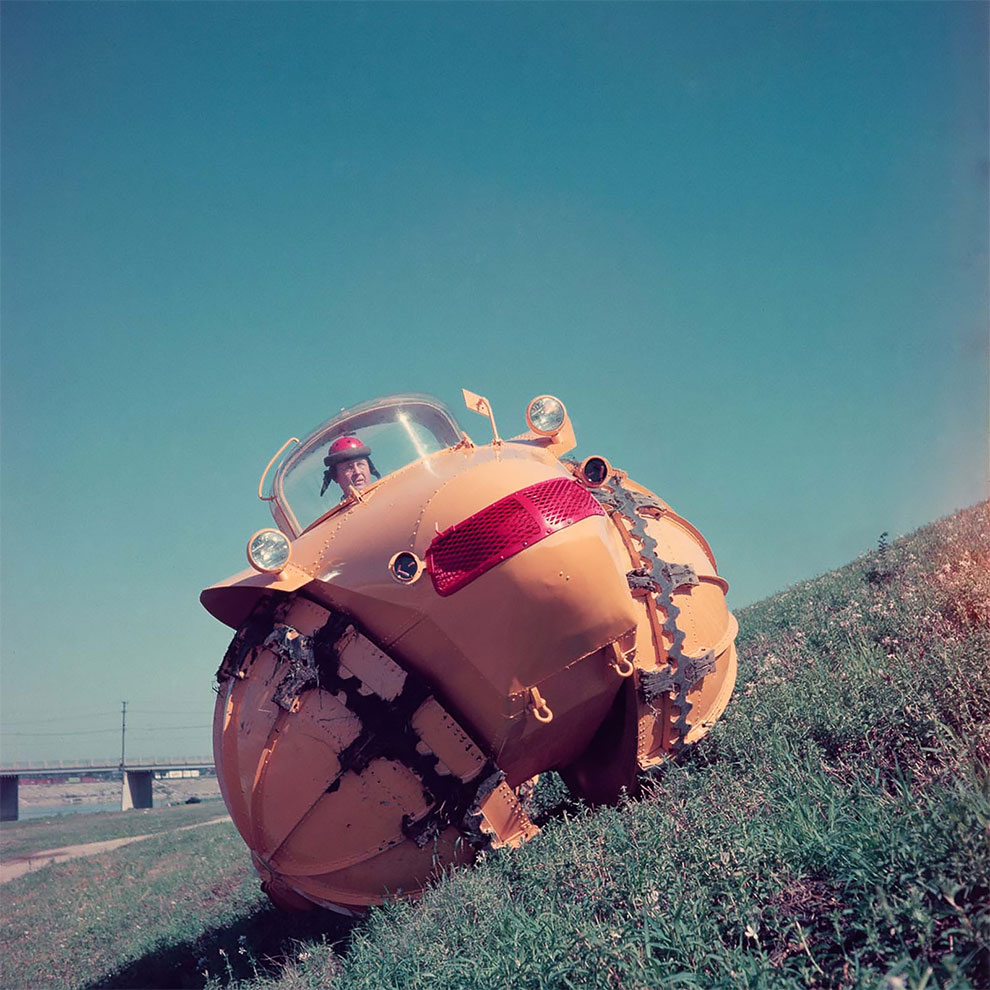 The bizarre amphibious four-wheeled vehicle called Rhino was designed by the Greek-American inventor Elie Aghnides. In the 1940s, Aghnides was watching a tractor laboring through New York City’s Central Park and figured he could combine the stability of a bulldozer with the speed of a car, and create an efficient, all-terrain vehicle. 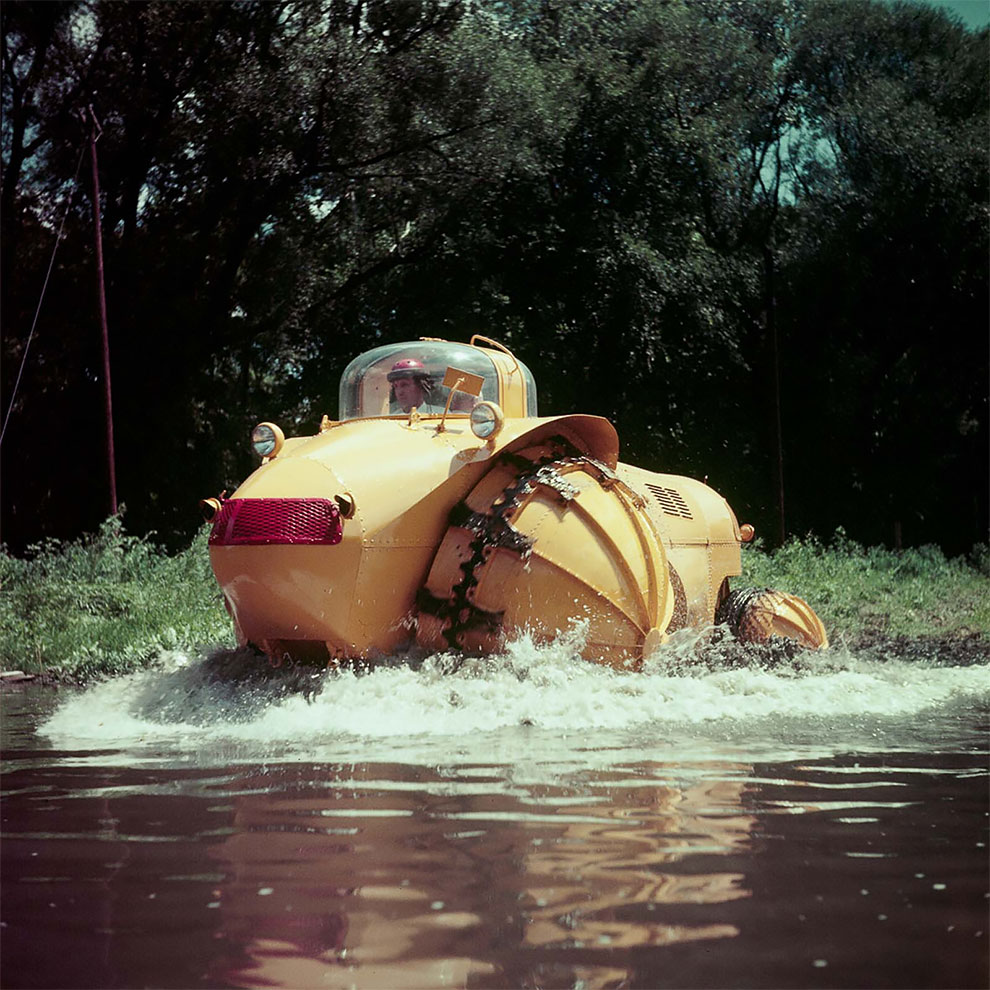 A few years later, he came up with the concept of an enormous vehicle nicknamed “The Rhino”. Defining features were its massive slanted front wheels, which had six-foot diameters and weighed 1,500 pounds each. The wheels were also hollow, which allowed the Rhino to float, meanwhile, a hydrojet propelled it forward along the water body. 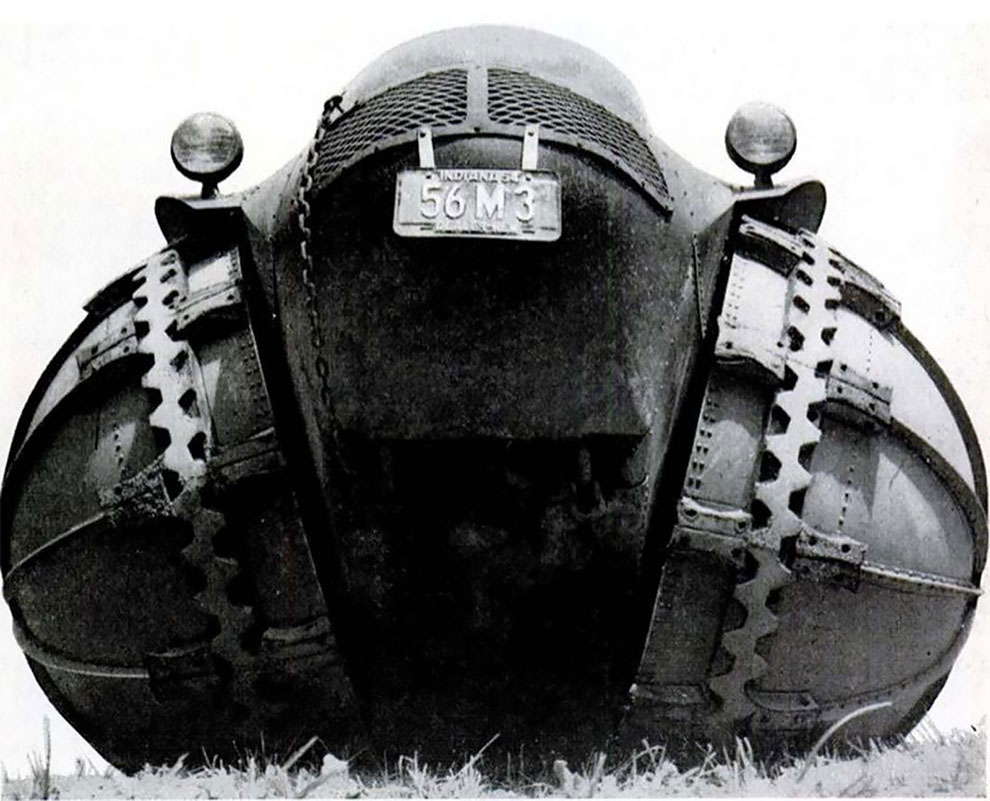 The odd-looking vehicle weighed five tons and could travel with ease through deep sand, mud, and water. On the highway, it reached up to 45 miles per hour, but in water, it couldn’t surpass speeds of 5 miles per hour. 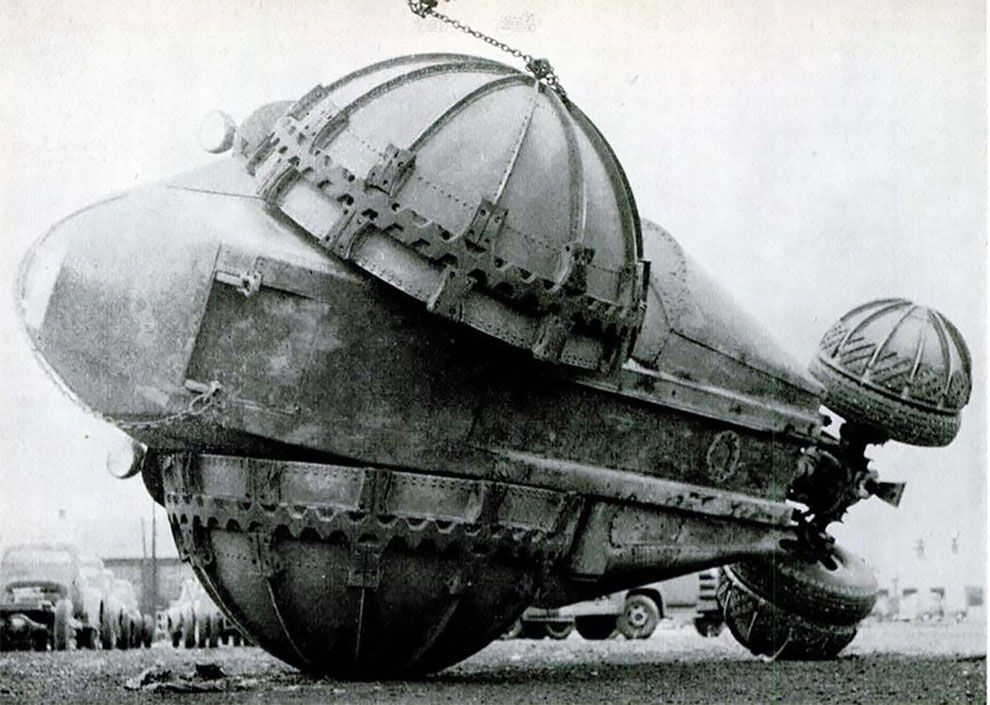 The prototype was built by Marmon-Harrington in Indianapolis in 1954. It was designed with a low center of gravity which meant it could tip 75 degrees to either side without toppling over. 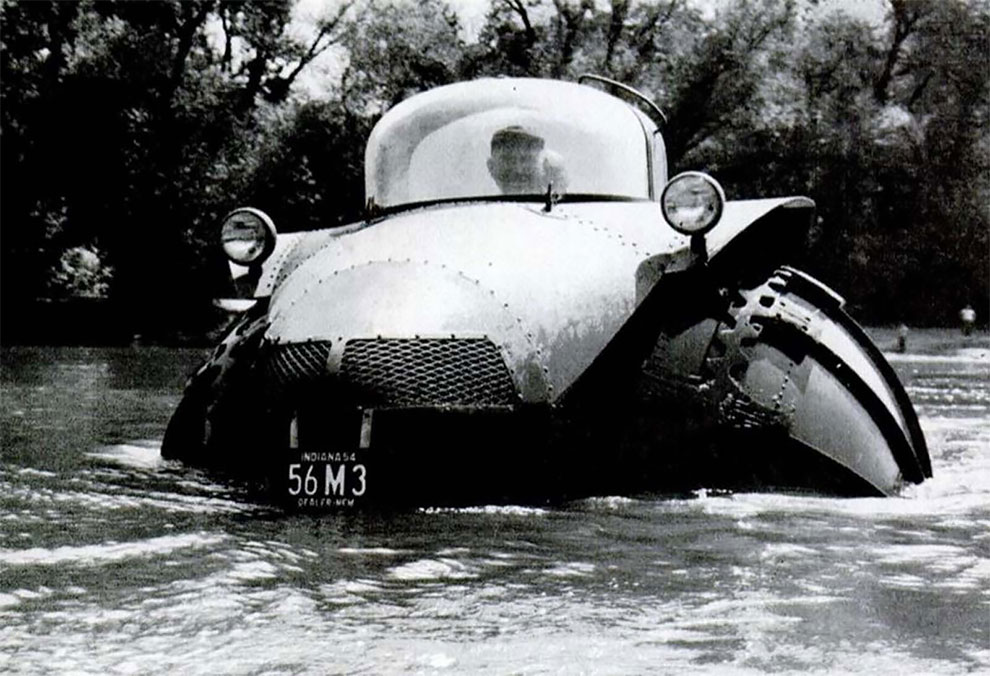 Aghnides demonstrated the invention for the military, but they decided not to purchase the invention because they feared the inflatable wheels could be pierced by gunfire. Several photos and videos exist of the testing of the vehicle. 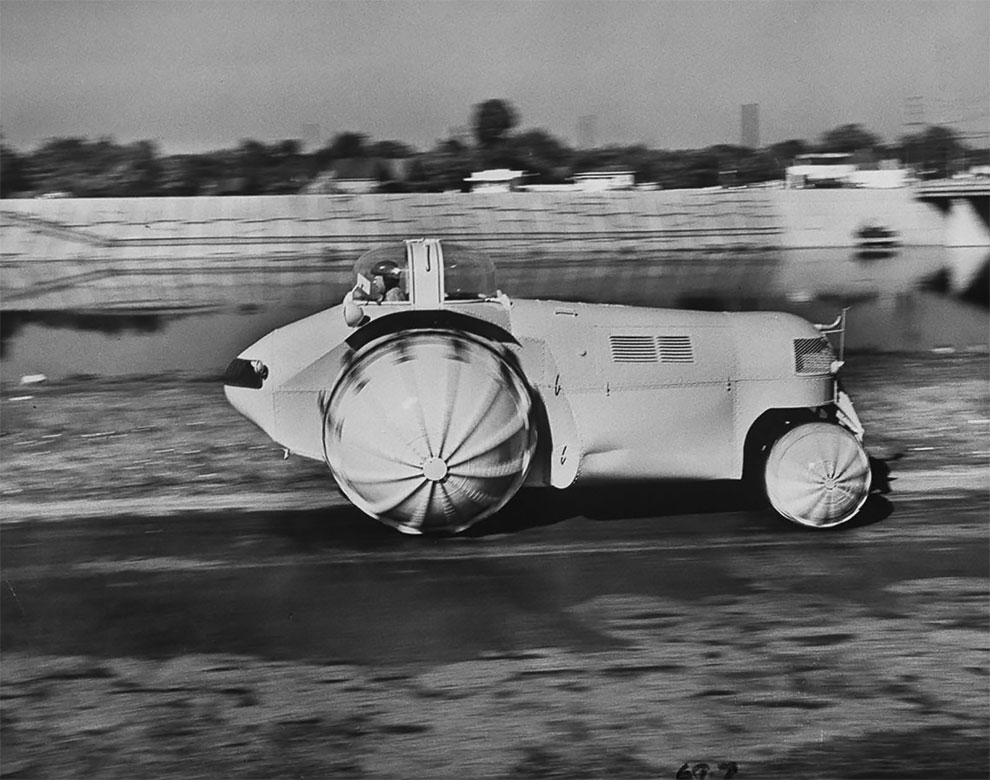 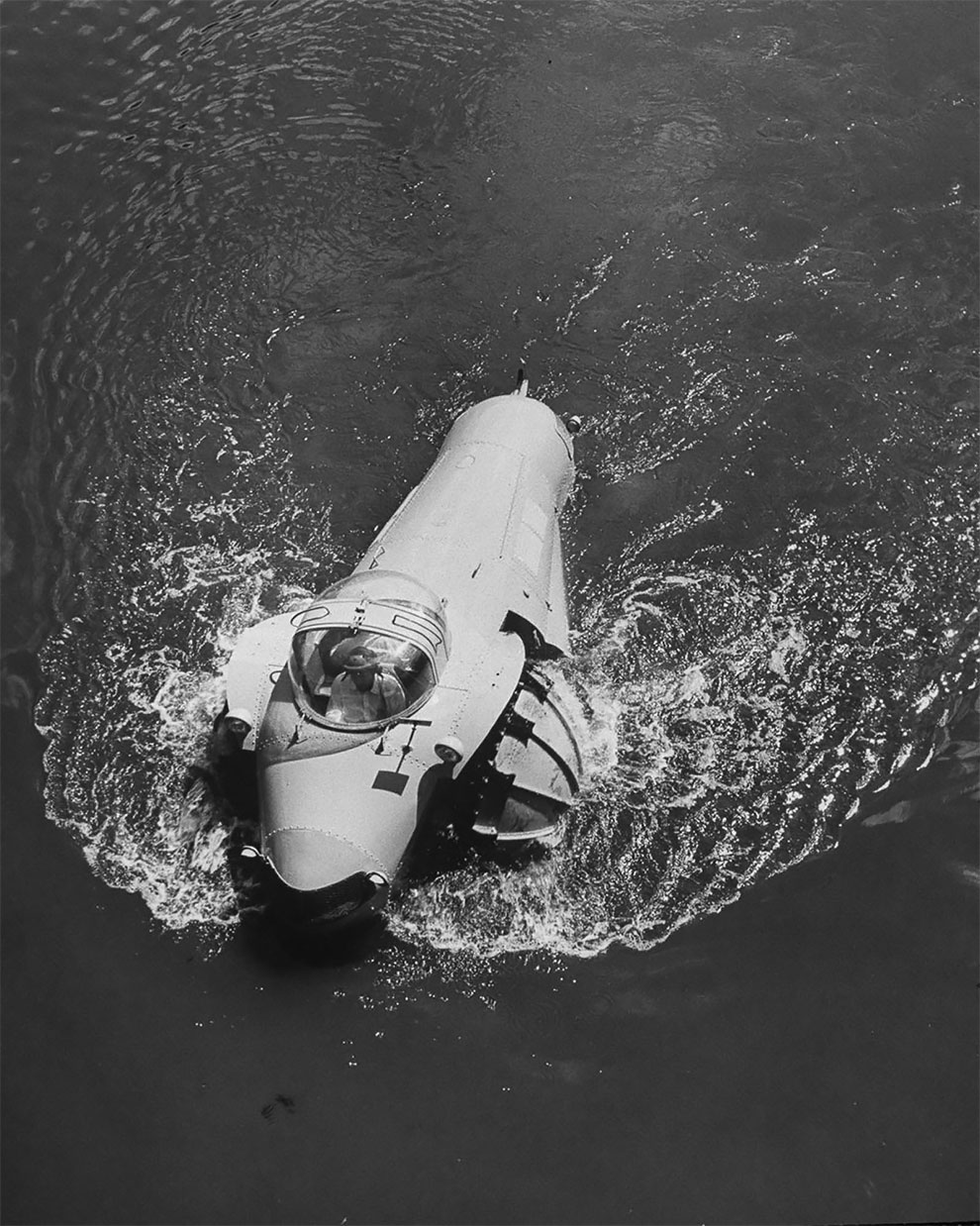 In 1980, American Express Teamed Up With DeLorean To Produce A 24K Gold Plated DMC-12, But Only Two Were Sold!
The New Cruise Ship 'Disney Fantasy' Leaves the Dockyard
Stunning Color Photography in the 1950s by Saul Leiter
This Awesome Vending Machine Offers Short Stories And Poems Instead Of Snacks
Streamliners: Locomotives And Bullet Trains In The Age Of Speed And Style
35 Rare Photos of the Construction of the Titanic
iPhone 5 Transparent Edition
Stunning Photographs From The Inside Of Russia’s Largest Bitcoin Mine
Electroluminescent Tree by Ian Hobson
Energy-Saving Lighting System Turns Night Sky Purple in Sweden
This Clock Has A Levitating Sphere That Tells The Time
Tiny Critter Becomes a Big Wheel
Jetman Performs at EAA AirVenture
Stunning Photos Show Mercedes-Benz 190 SL's Assembly Line In February 1958
"The League Of Extraordinary Gentlemen": Superb-Looking Captain Nemo’s Nautilus Car Is For Sale
Pesticides Causing Havoc to Beehives
Necono The Cat Digital Camera
Innovative Umbrella That Keeps Your Camera Dry When Shooting In The Rain
You’ll Poke Someone’s Eye Out With Those Things: Bullet Bras From The 1940s And 1950s
Innovative Virtual Shop
Colorado Dedicates $8M for Medical Marijuana Research to Understand Benefits
Artist Dominic Wilcox Invents Glasses That Allow Short People To See The World From ‘Above’
Photographer Benedict Redgrove Given Unprecedented Access To NASA Technology
Green 3D Printer Prints Living Designs From Organic “Ink”
1950s, experimental, rhino, vechicle